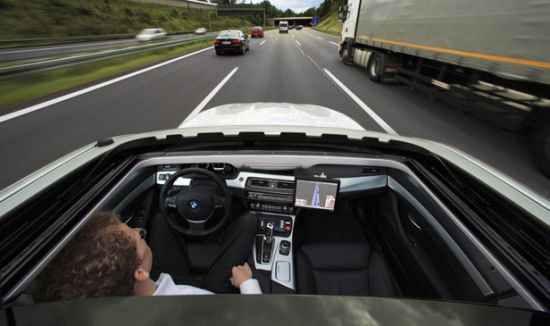 Now the topic of robotic vehicles that can navigate in the environment avoiding obstacles such as pedestrians and other vehicles, very popular. Probably the most famous example of realization of the idea of robot-car is a car from Google. These cars have repeatedly shown that they are capable, and are indeed commendable. But BMW has prepared also a good option of robot-car.

So, in the car from BMW has also a large number of different kinds of sensors, cameras, laser scanners and other devices that help cars navigate in space. But the difference between the cars from BMW and Google cars is that the BMW tried to hide most of the systems, making the almost indistinguishable from a normal 5 Series car.

BMW believes that these cars will go on sale in 5-10 years, and now actively works to make robomobile practical and effective. Order to prove the practicality of the car, the company conducted a test, giving the robotic car ride on high-speed autobahn (no speed limit). The tests were quite successful, with what the company are to be congratulated.