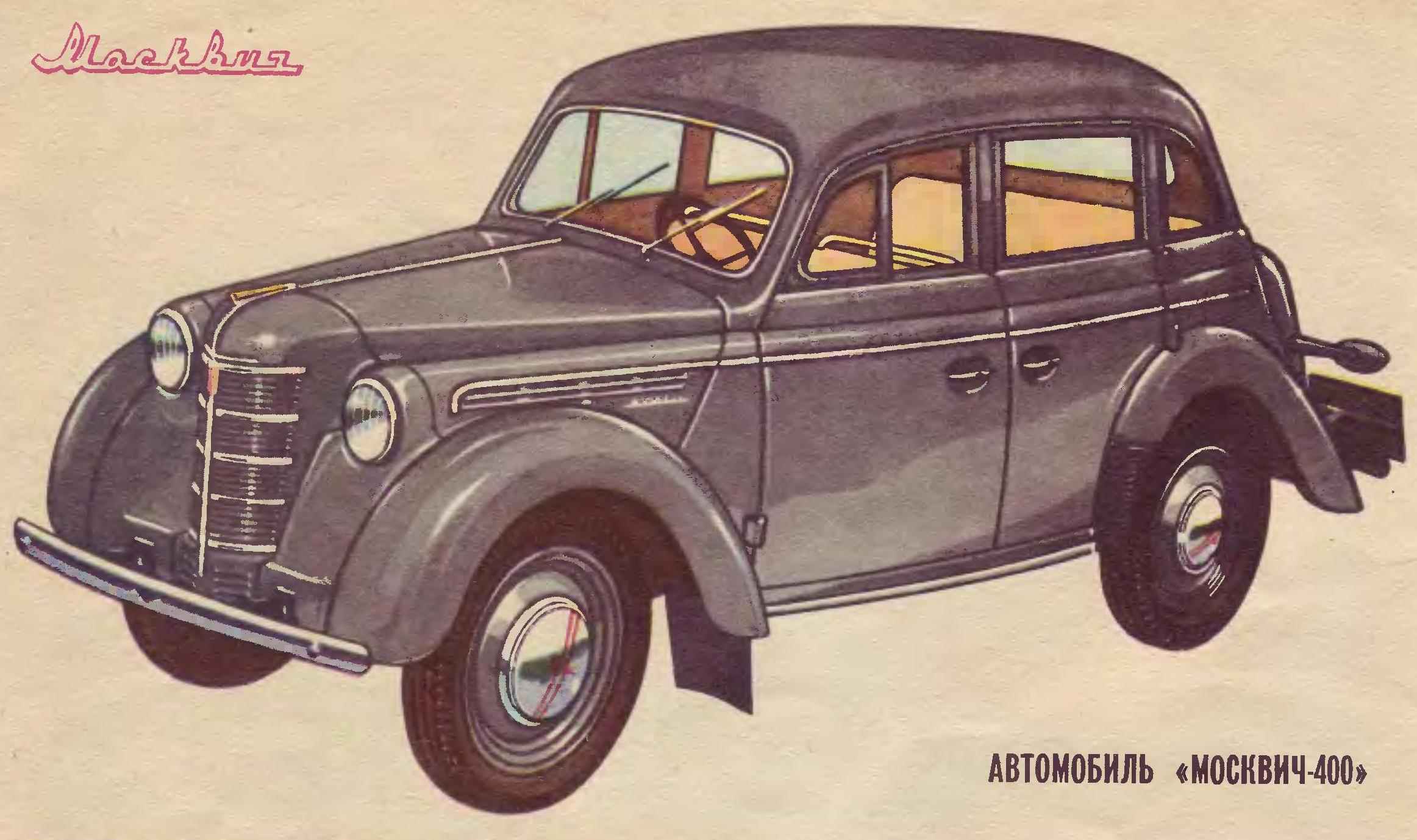 He appeared on the streets of the capital shortly after the war, in 1947. At first glance the design of the car “Moskvin-400” was not fundamental innovations. Its main advantage was a good correlation of parameters of a balanced relationship of technical solutions, comparative simplicity.

The team of designers and technologists of the plant from year to year developing these virtues, guided by the practical formula of “reliability, durability, stamina,” These three qualities eventually became, figuratively speaking, the three pillars on which firmly stands the reputation of the brand “Moskvich”.

“Four” was equipped with four-cylinder a very compact nineleven engine. Many of those years had a negative attitude to the position of the valves in the cylinder head. The overhead scheme was attributed to the design complexity and noise in operation. Today, in the light of contemporary trends, the arguments seem to be not good enough. But then they seriously affected the choice of engine type.

Head and cylinder block of “Moskvich-400” was cast out of the cheapest metal is iron. All major engine components were positioned so that when the raised side of the bonnet opened easy access to it in the process of maintenance and repair works.

Engine “four” had a compression ratio of only 5.8 units, running on gasoline with an octane rating of 66 and in those days was different enviable longevity. His power 23 HP at 3400 rpm is quite enough to smooth the highway the car was travelling at 90 km/h Then the pickups have not been such a big deal as it is today, not caring and reputable supply of power. At full load the “Moskvich-400” converted / weight 20.5 HP; the current “Zaporozhets-968” under the same conditions twice. 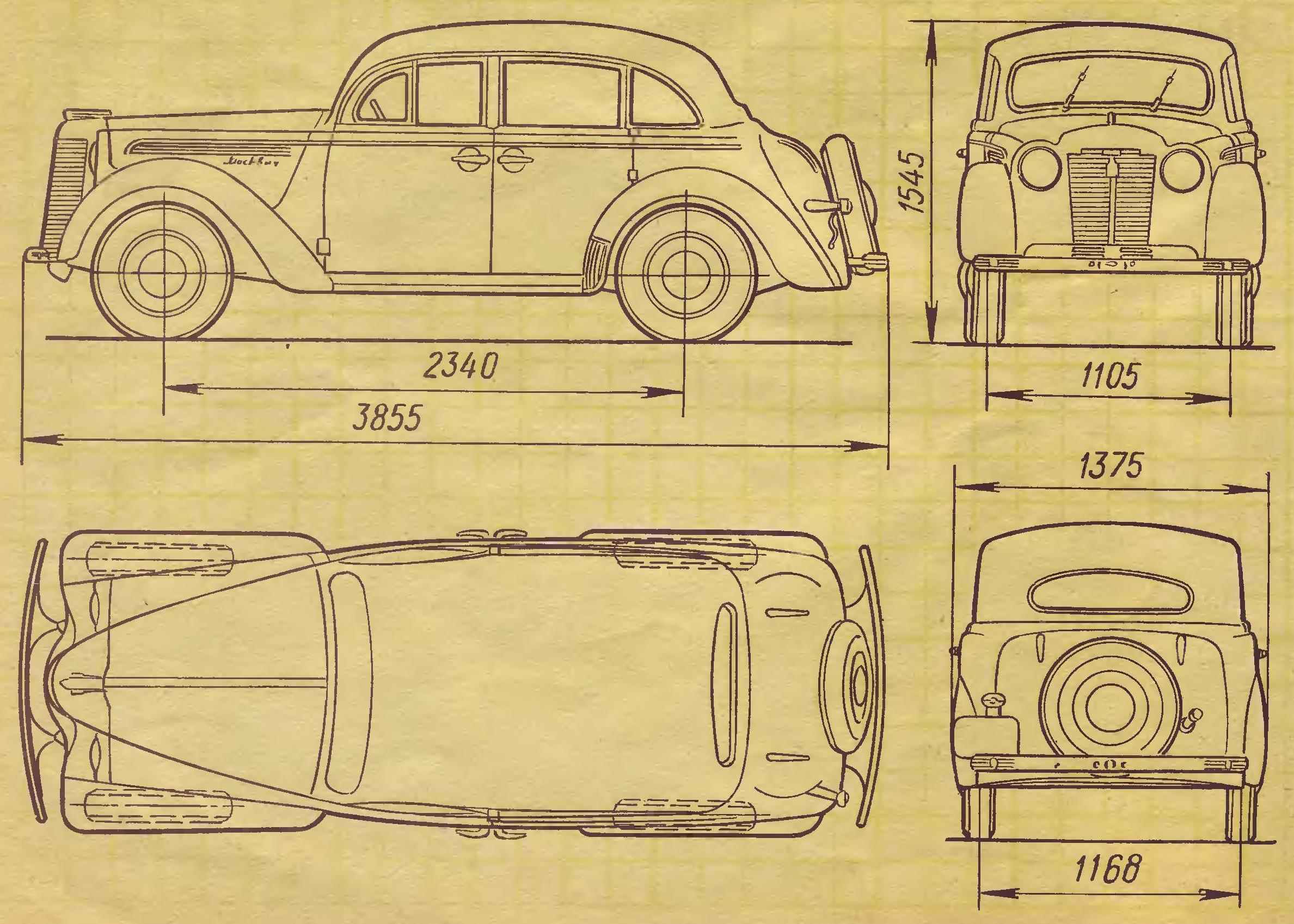 Traffic on the streets and highways at that time was not nearly as intense as it is now, when, despite the maximum speed limit, it’s important to start on the green light or catching the perfect moment vigorously to make overtaking road trains a twenty-meter length, So the car a quarter century ago to ride hard.

The relatively modest pick-up “four” explained the three-stage gearbox (with four “speeds” acceleration, of course, faster), which had no synchronizers (loss of time for switching slow acceleration). The shift lever until 1951 was located on the top cover of the gearbox, and later was moved to the steering column. 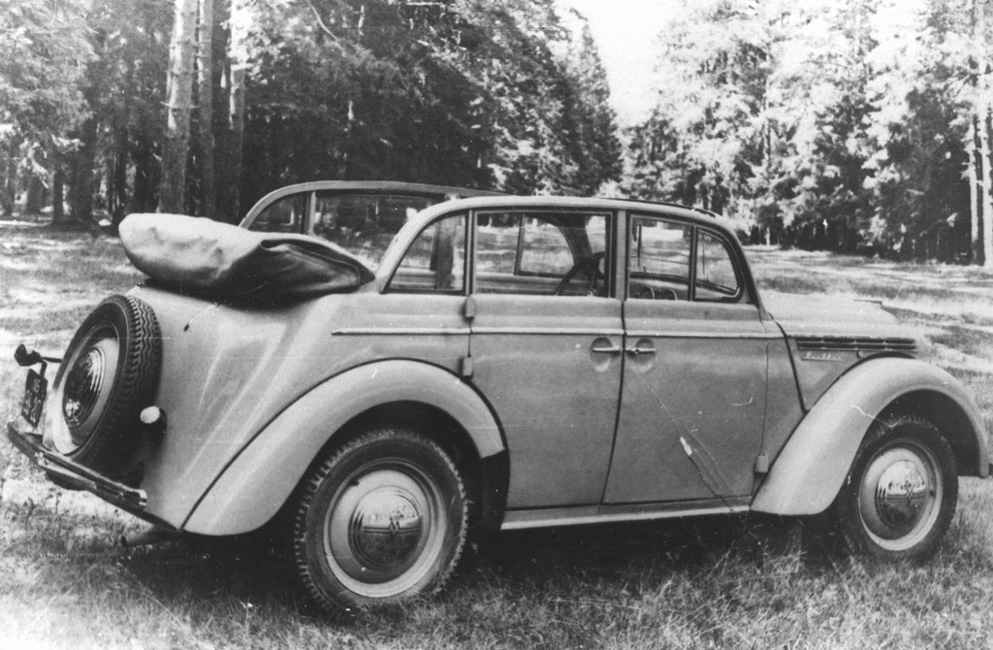 An unusual feature of the car was the independent front suspension of Dubonnet type. Named for the inventor, the French racer 20 years, it provided the wheel swing in a plane parallel to the longitudinal axis of the machine. Recorded two wheel trailing arm. One acted on the spring is enclosed in a cylindrical housing, which housed the hydraulic shock absorber unilateral action. This cover also served as a reservoir of absorber fluid and able to rotate about the pivot. Another lever pivotally connected to the housing, transferred to jet force when braking, when the wheels together with the brake pads and the platter has sought to pivot the first lever

But the brakes were non-standard. First, the hydraulic drive in the early 40-ies has not yet fully prevailed over the mechanical system of rods, rocker arms, levelers, cables. Second, on “Muscovite” cast iron brake drum was both a hub and a wheel disc. The drum was sitting directly on a ball bearing axle front suspension or on a conical neck, the rear axle shaft. Stud mount wheels have been put to the maximum design diameter. So the wheel instead of the usual drive virtually had only the rim with sockets for nuts. In General, the selected suspension design, brake drum and wheel provided the low weight of the unsprung parts, which has a positive effect on the stability of the machine.

Quadruple chetyrehdverny the body was a monocoque made and were of high strength. Older motorists, in particular, noted its high resistance against corrosion, explaining that the body is allegedly made from Lou-wife steel.

But they were wrong. The wings round the body had a convex curved shape. Often, after welding the appearance of irregularities, which became after coloring very visible and gave the impression of “wrinkled” surface. As the scale of production was relatively small — less than a hundred cars a day, defects were corrected quite time-consuming way — by Stripping sanding and welding in the right places tin alloy. Sometimes these “patches” were quite large, and has misled motorists in the repair of the old “Muscovites”. Of course, in the production of modern passenger cars on straightening and surfacing in almost no time, and to avoid the appearance of defects, carefully work out the technology of stamping and welding body panels.

The body of “four” had no heater and radio, so familiar to today’s car. The wiper is driven not by a motor and flexible shaft from the engine. This seemingly rational decision has one important drawback. In heavy rain or snow, when the road became slippery and involuntarily had to go at a low speed, due to the low number of revolutions of the engine wiper worked slowly and did not have time to clean the glass.

The designers of the enterprise constantly improved “Moskvich”. From mid-1949 they introduced the filter of thin clearing of oil, which increased the service life of the motor. In 1952 began the installation of the rear bridge with more durable bearings and axles. In 1954, the plant has upgraded the engine, increasing its power up to 26 HP at 4 thousand rpm Increased to 6.27 unit compression ratio. The car received a new steering wheel, handbrake lever moved from the floor under the instrument panel. All these innovations are reflected in the index of the machine — 401. However, it is necessary to make a clarification. “Muscovites” then carried dvojni code: the first digit meant the model of the engine, and the second modification of the body. In addition to the basic closed body of type “sedan” (it corresponds to the numeral 420), the plant built the “Moskvich-400/420А” with passenger bodies, which has a canvas roof could be folded, and the sides were hard. Such a body was called a convertible. Brief information about these machines are shown in the table. In addition, on the chassis of “Moskvich 400” set body type “van” (they were numbered 422) with a lifting capacity of 200 kg. Wood frame beams and panels of bakelizirovannoj plywood gave the car a kind.

The plant is intended based on the van to release the car with five-door body type “universal”, it was given the index 400/421, in 1947, was built several prototypes.

Externally, the “Moskvich-400/420” to the end of the 40-ies looked a little outdated. And in 1348, a year after the development of mass production of cars on ZMA designers have created a “sanitized” version of the body, which had an index of 424. It used the hood “alligator” type (as in “Victory”), the spare wheel placed horizontally under the trunk, overhaul changed all the exterior panels, but keeping the old body shell, racks, doorways, roof.

To introduce these innovations into production, we had to make stamps. Independently ZMA then in a short time could not do it, and the other plants were prepared to manufacture new machines. The word, “Moskvich” with a streamlined appearance has not reached the conveyor. 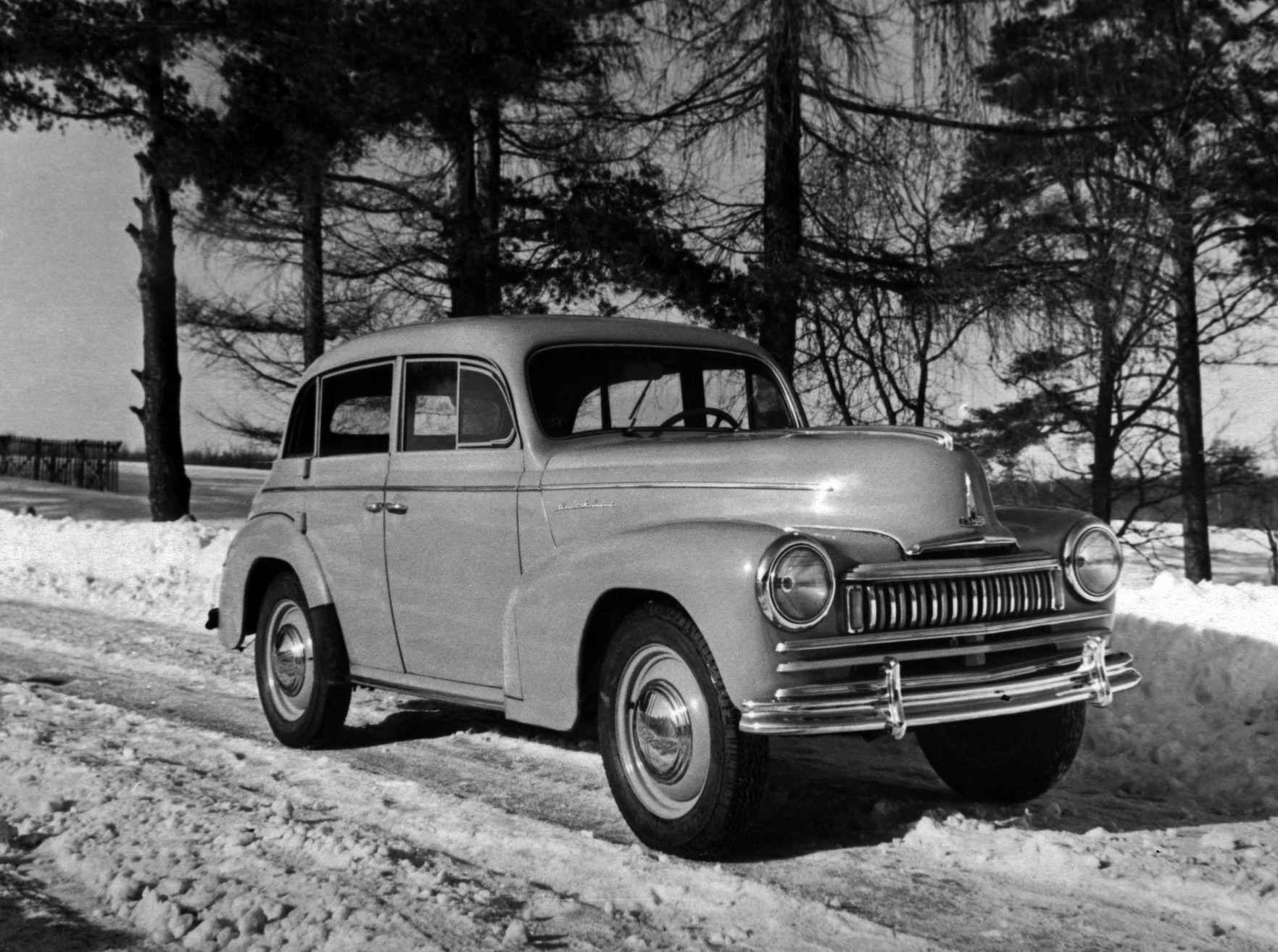 Along with the body of the plant specialists developed new engines. In 1950, he was born experienced a motor with a so-called mixed arrangement of valves (upper — inlet lower — outlet). He developed a power of 37 HP Later, in 1952, was created by another design overhead valve engine, which was based on the engine block of the car “Moskvich-400”, It was given the index 404. When the working volume 1074 cm3 he developed a power of 38 HP at 4200 rpm.

In 1954, he was born different, more advanced, is also overhead valve engine. He received index 405 and the working volume 1090 cm3 developed capacity of about 40 HP, It featured an aluminum cylinder block, very short rod valve train, camshaft drive double-row roller chain that is smaller than the cylinder diameter the piston stroke.

However, both engines required construction of a new plant of motors because it needed were new machines and equipment. The plant is then prepared to release the “Moskvich-402” and to take immediately after two big things I couldn’t.

Experiments with the engines kept pace with the experimental work on sports cars. In February 1949, the factory put the serial “Moskvich 400/420” winter race Moscow—Minsk—Moscow. The result — the first place in its class and all-Union record at a distance of 1000 km 83,8 km/h.

When the next year was first played in the USSR championship races, the first was again “Moskvich” serial body and advanced engine, which had a mixed arrangement of valves. Another engine was on experimental “Moskvich-424,” which finished third.

In 1951, winning the national championship was won by car, equipped with a (in the figure named “404-Sport”) the reconstructed model engine 400 with aluminum heads, increased to 6.8 units compression ratio, increased displacement and larger intake valve. When, in April, 1956, PCA began to produce “Moskvich-402”, their 35-strong engine working volume 1220 cm3 were indebted to 34-horsepower motor 1951

It is important to note the appearance in 1951 at the races “Moskvich” with a two-seater coupe (body modification 424) and the motor, which had a mixed arrangement of valves. On this machine (in the figure named “460/424 Coupe”) won second place at the USSR championship 1951. 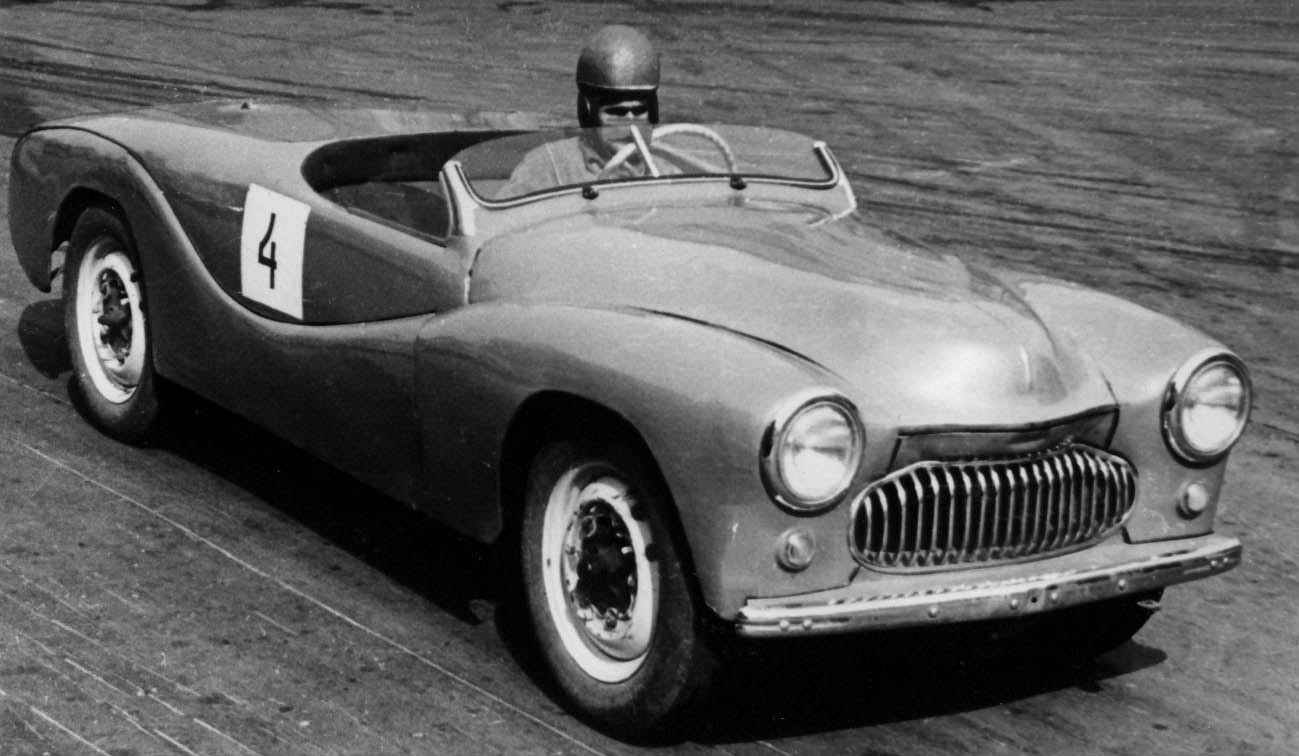 1953 was marked by the emergence of the championship of the USSR “Moskvich” serial body and engine 404. For the first time in the country this motor was installed four carb — one for each cylinder. Power increased from 38 to 55 HP But with such a powerful motor old “Moskvich” was unwieldy. At the same time to abandon the laboratory on wheels for testing of new engines in race conditions is not wanted. Therefore, in the spring of 1954, the events appeared “Moskvich-Sport”, with a lower centre of gravity and improved handling characteristics.

If the “Moskvich-Sport” was equipped with a motor 404 (later on it was ispytyvali and other engines), born in 1955 racing “Moskvich-G1” had forced engine model 405. A distinctive feature of this car was rear engined and a narrow single body with open wheels. But despite this, he sahrani relationship with the “Moskvich-400”: front and rear suspension, brakes, steering mechanism, several modified transmission.

A year later was born the “Moskvich-G2”. Its main difference was in a streamlined body, fully covered wheel. Improved aerodynamics immediately gave an increase of speed at almost the same power, it increased by 23 km/h.

Both racing “Muscovite” has repeatedly upgraded, and for seven years they were established several all-Union records and won many victories in important competitions.

And the old “Moskvich-400”? In April 1956 he was replaced on the Assembly line new design, the “Moskvich-402”. In just ten years, the Moscow compact car factory built more than 250 thousand “Muscovites” of the first generation.