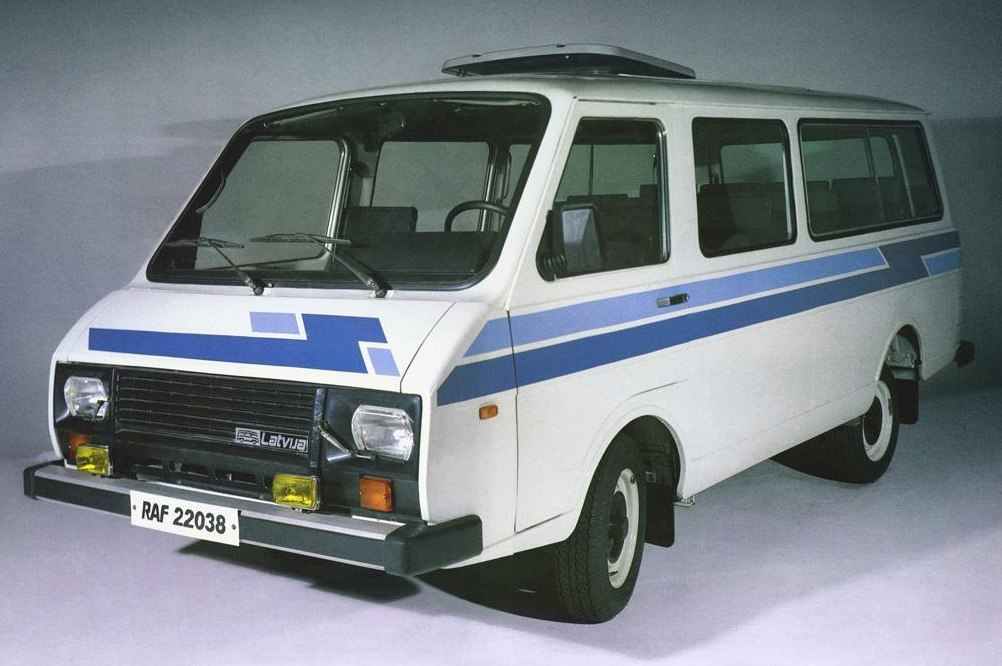 Race through the streets of a nimble brightly painted machinery-trailers with checkered Board. Scurry Shuttle for precise routes, working tirelessly from morning to night. On the hood of each is an inscription: “Latvia” and the logo: “the RAF”…
The minibuses. Machine in current conditions, when the streets become more and more close, when a slow and powerful trolley buses articulated buses Willy-nilly, slow down your average speed, just need.

Could this be the reason for the rapidly growing popularity of Rufov, the ever-increasing need in them do not let machines with conveyor, all instantly will take to the track.

Have Rufov and a lot of other “professions” about them later, but for now we will note the main feature of these machines, which occupies an intermediate position in the transport between bus and taxi, — compliance with the transport saturation current roads. And the speed that reliably delivers a powerful “volgovskoe” engine, and maneuverability (toddler RAF can squeeze into the narrow streets), and efficiency: the same machine as the usual taxi, and carries three times as many passengers.

Immediately came the designers of cars to the idea of urban minibus like Rafa. The need has been particularly felt in 50 years, when the rapid growth of car production set for the first time in our country in the agenda the question about the most efficient use of increasingly filled with traffic roadway. The minivans are needed, and institutions and economic enterprise (refers to the modification of vans for transportation of small parties of cargoes), and even sports organizations. One of the search options were minibus “Youth”, created in those years, young designers on the basis of ZIL cars of class “luxury” ZIL-111. However, the mass he did not, and could not be too expensive were “source materials”. 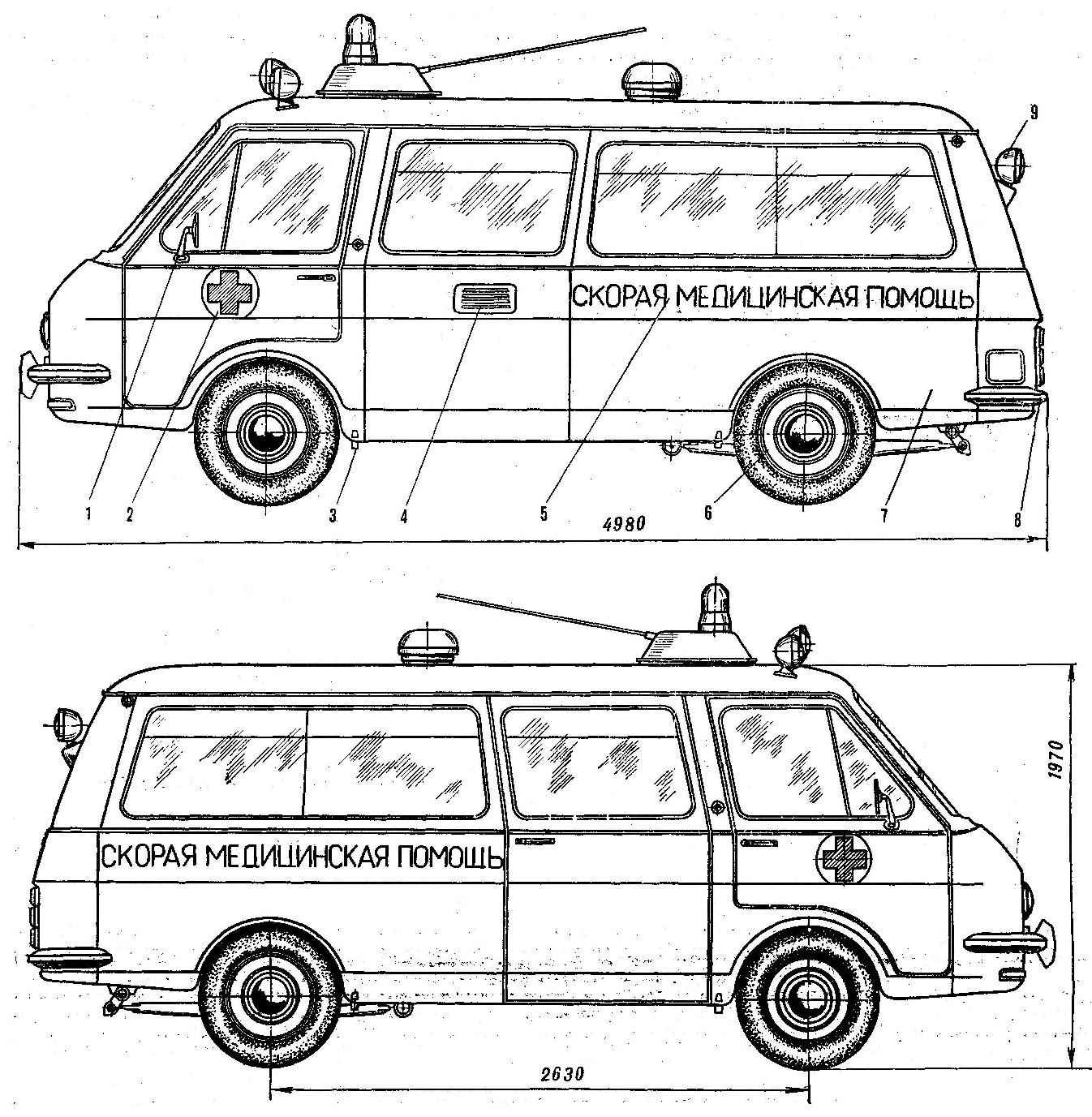 14 — decorative grille of the heater.

Needed like small, roomy and comfortable car and taxi: why to drive in one end, one established route 10-11 cars, when all passengers will be able to get one! Muscovites remember the first “bus” appeared on the streets of the capital. It was a comfortable seven-seater GAZ-12, EN route on strictly defined routes with a constant stream of passengers. Practice has shown, however, that for taxi and these machines are inconvenient, and expensive. 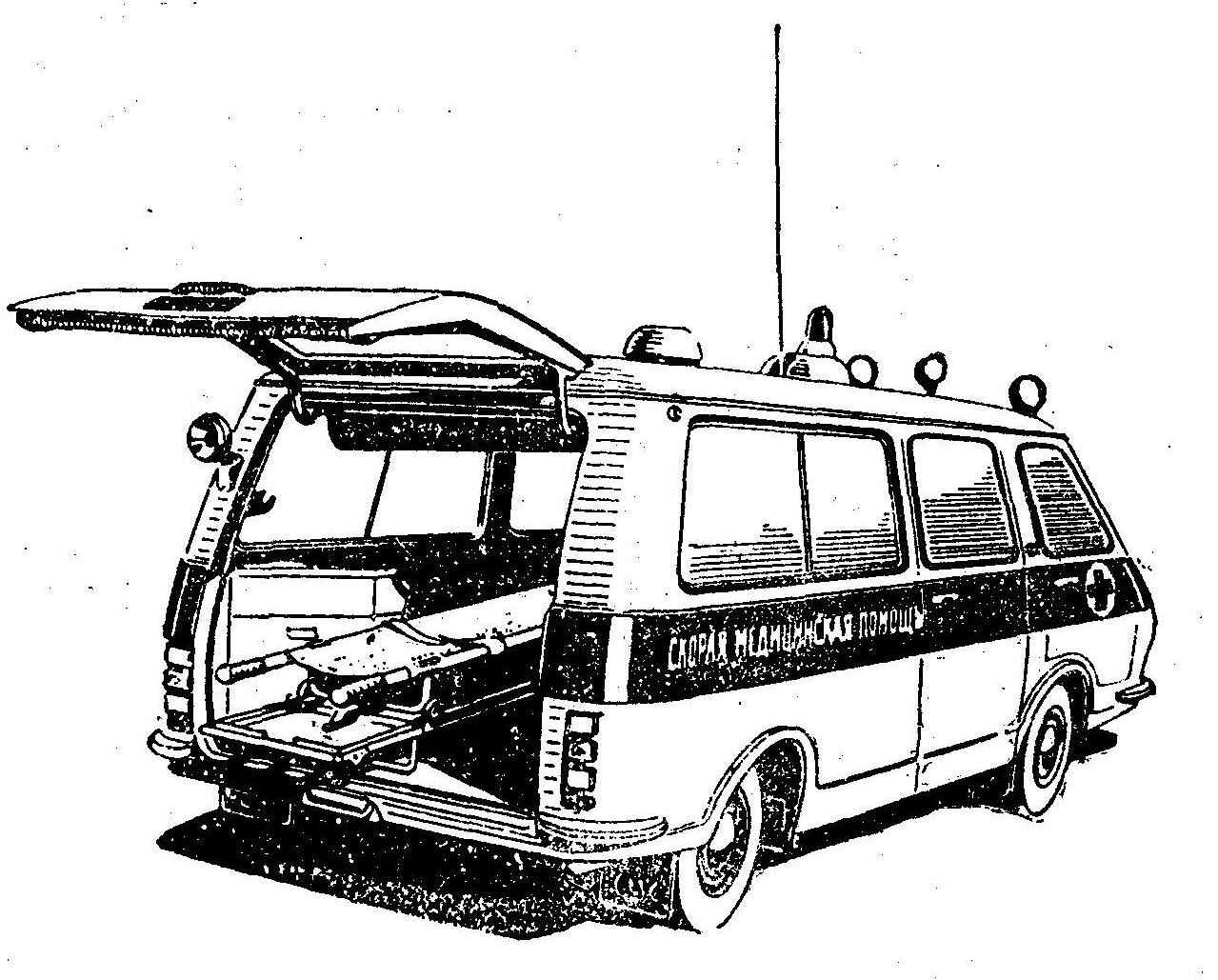 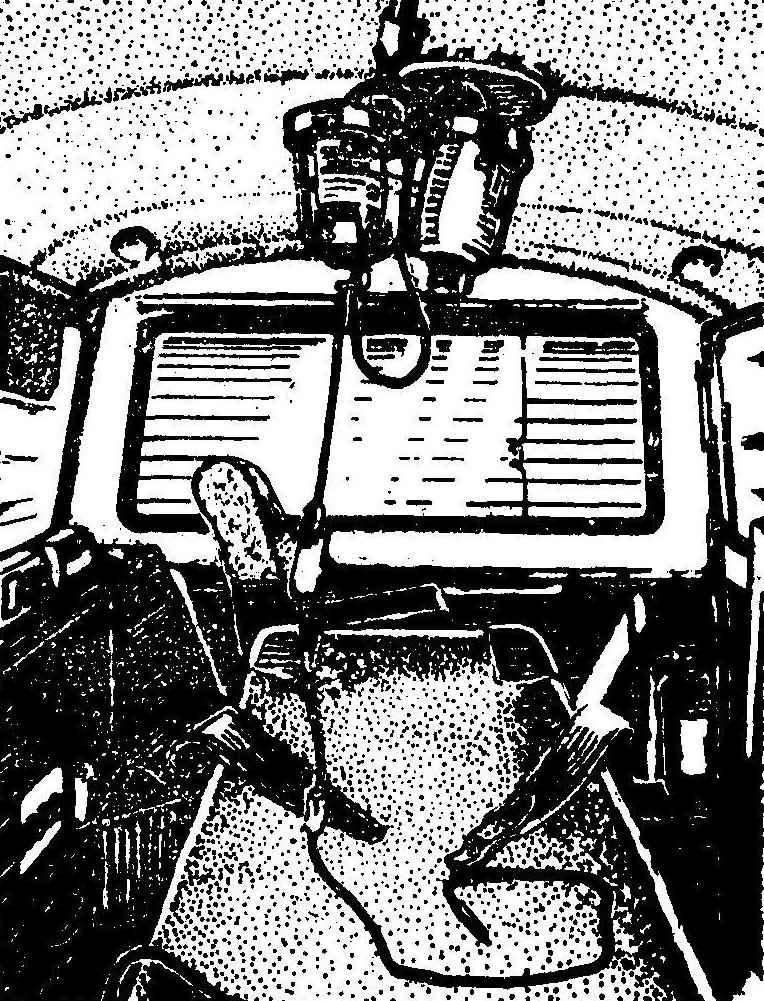 And then in Riga on the basis of auto repair shops and was the first RAF marked the beginning of a new branch of a domestic autostructure. It happened exactly twenty years ago.

Then there was no factory in the modern sense of the word. In not very adapted room, largely hand-built by young Latvian enthusiasts first ten cars. Their debut took place during the Moscow world festival of youth and students. The debut successful. Simple, convenient, fast cars with the logo of the RAF (Riga automobile factory) is immediately conquered and drivers and passengers.

And gone! Soon Rafa are simply omnipresent. A modest, unassuming appearance, the vans took food and mail, accompanied the aircraft on the airfields and reconnaissance party in the field survey, with their appearance relieved the employees of “Ambulance”, because in the back of Rafa, it was possible to equip everything you need for an emergency-assistance in distress to a man, they have used theatres, radio, television — like tireless Figaro, the RAF was ripe everywhere. And of course, he firmly took its place in a taxi. Practically, maintaining the comfort and speed of cars, minibus appeared it is advantageous in many respects. 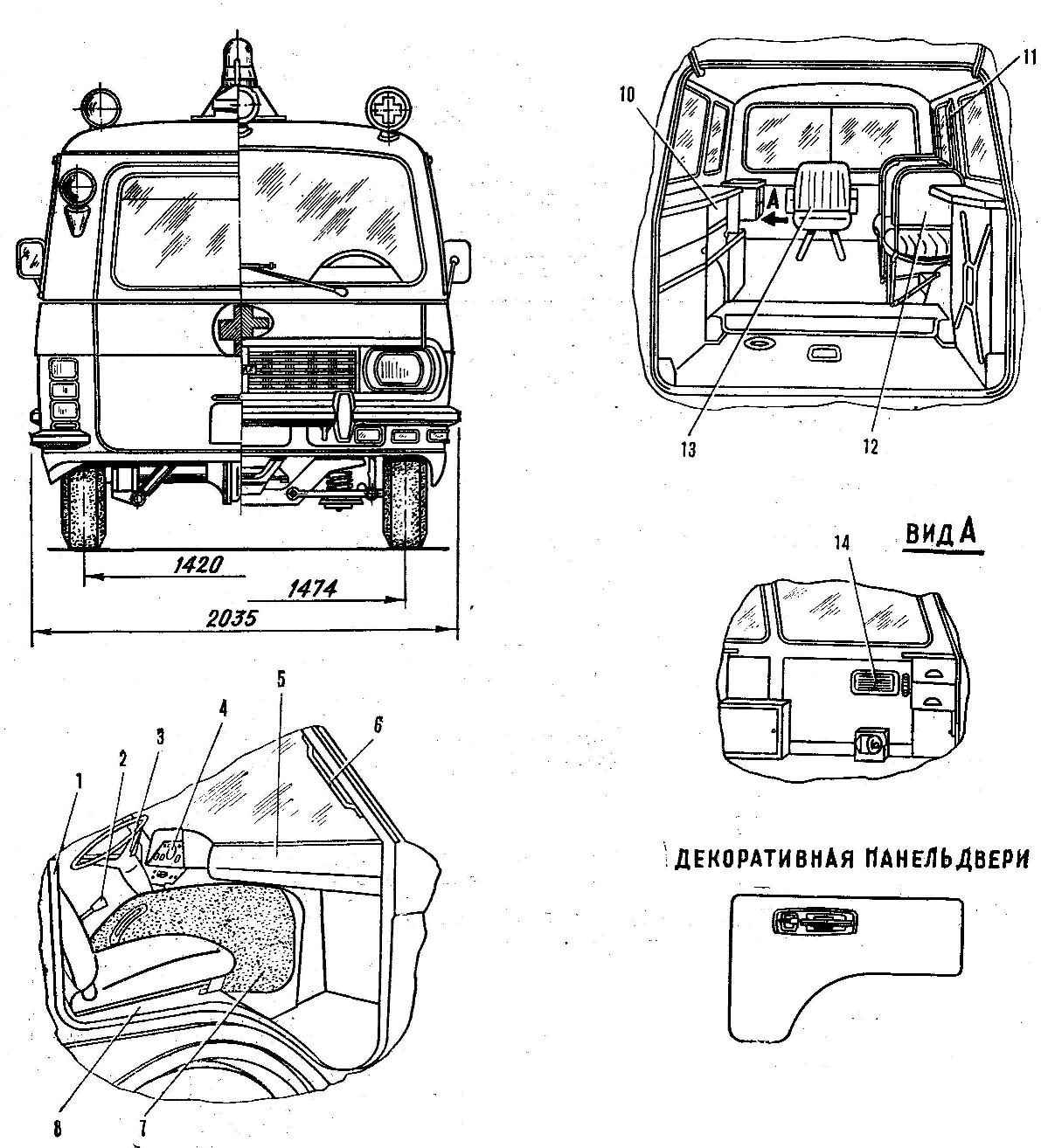 As time passed, the van slowly modernized. But Gorky automobile plant started production of the new model, GAZ-24, and old RAF was left without the “heart” of the engine. However, no one is confused, because enthusiasts Rafa gradually preparing for such a prospect, and they have long matured idea of a new car, it meets modern requirements and manufactured product range. 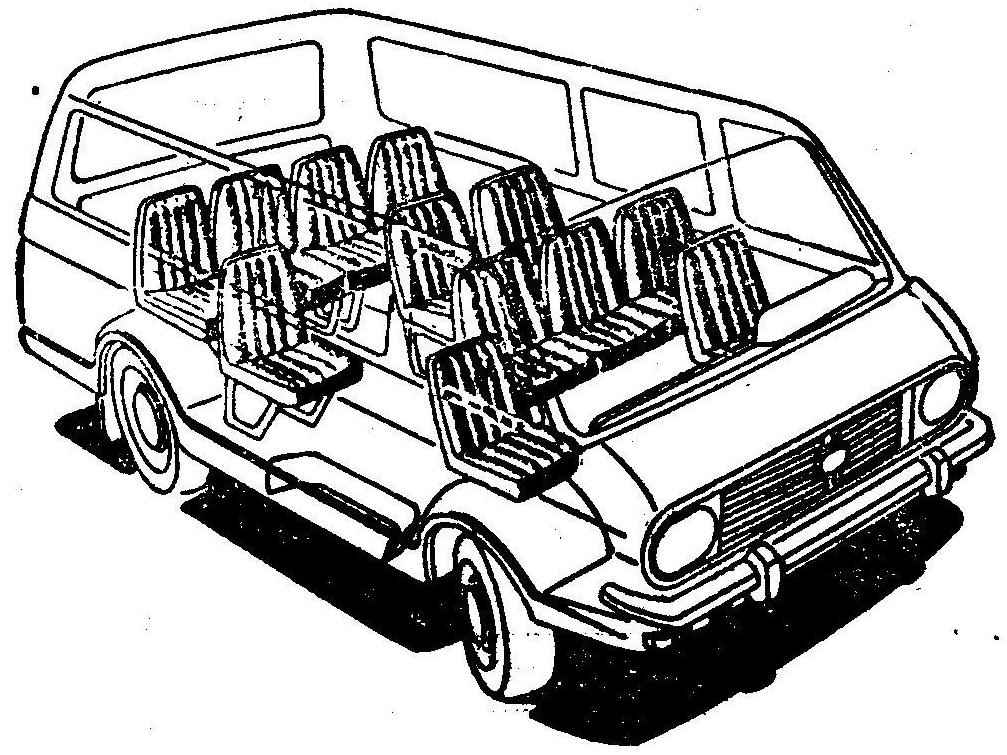 It is no secret that collecting a new van for old industrial areas was impossible. Yes, there was no need: not far from Riga, Jelgava, already towering body of a new plant with conveyor belts, with modern technology, with precise and productive machines.

Hence, there is now on the mainline of the new RAF with an index 2203, born in the old Riga workshops. 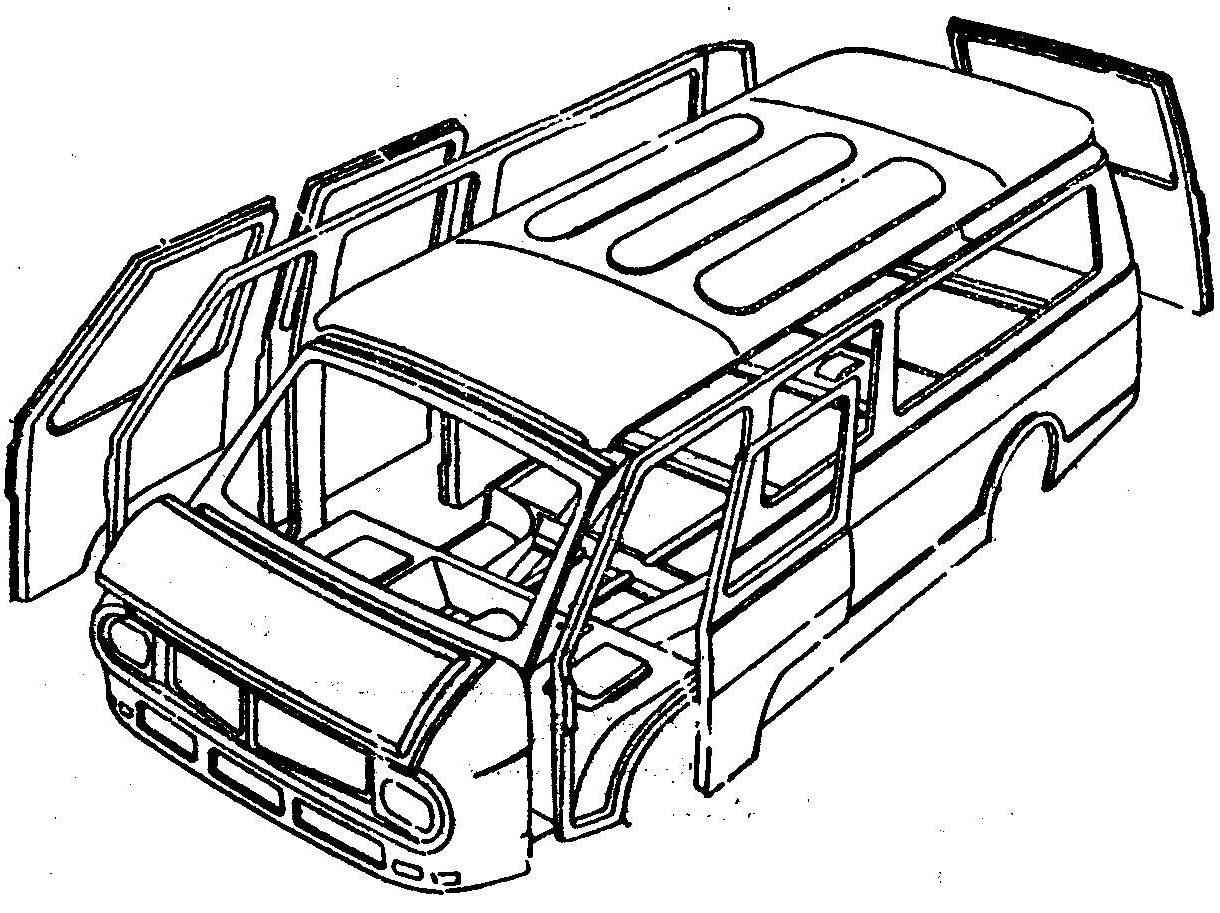 The first hundred cars came out of the factory gates in anticipation of the XXV Congress of the CPSU. Now they have many thousands, over ten thousands of vans a year gives a factory Assembly line. And, judging by the numerous reviews coming to the factory, their quality is commendable. New RAF also is available in different versions, some of them represented in this room. There is no doubt that its scope will be years more. By the way, one of the tasks, on which work is now designers Rafa is formulated as: to develop a series of vehicles to service the Moscow Olympics. In addition to the usual in tourist option, it is necessary to provide buses with special compartments for the transport of sportparadise, cars for judges. Trains are being developed for guests of the Olympic village. Finally, perhaps the most interesting long-term view created by design — electric car, which will follow the race: entry to the distance of the cars with a conventional gasoline engine is strictly prohibited. 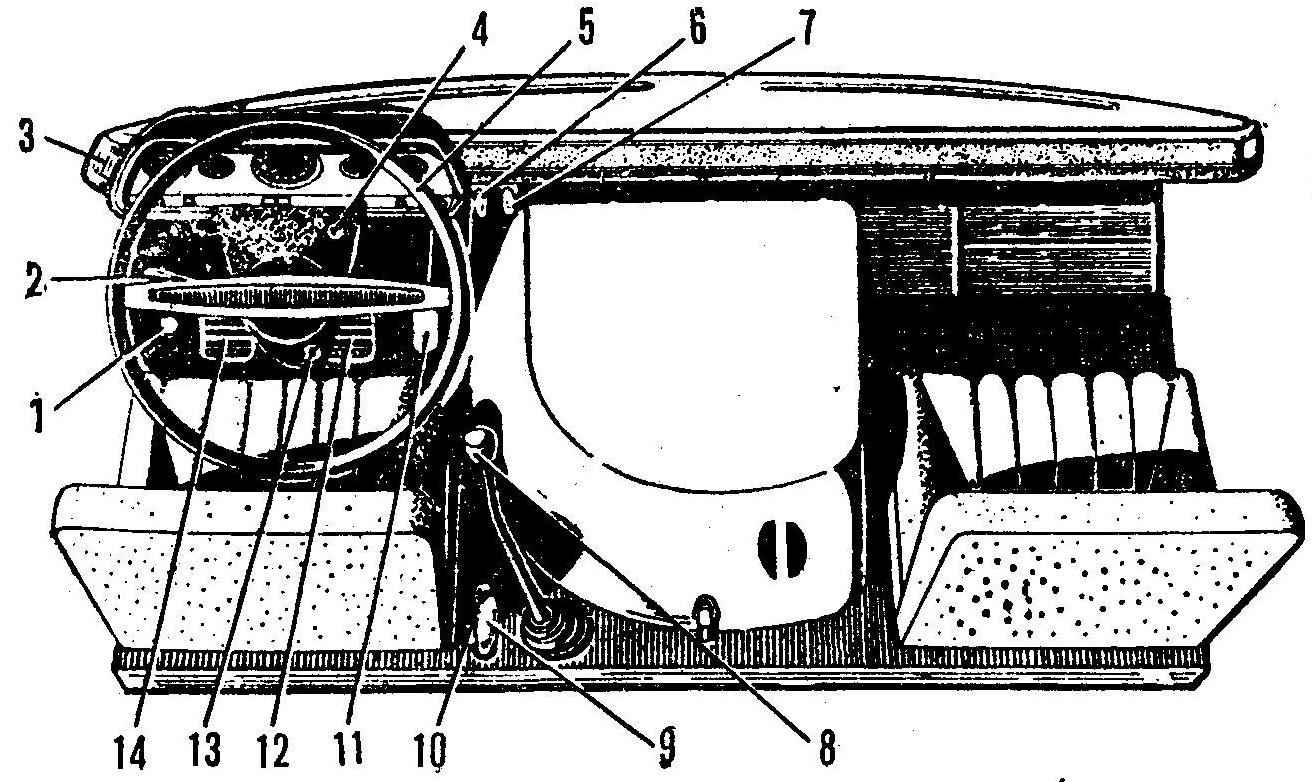 3 — offtake of the heated glass doors

4 — the handle of the pump of washing of the windscreen 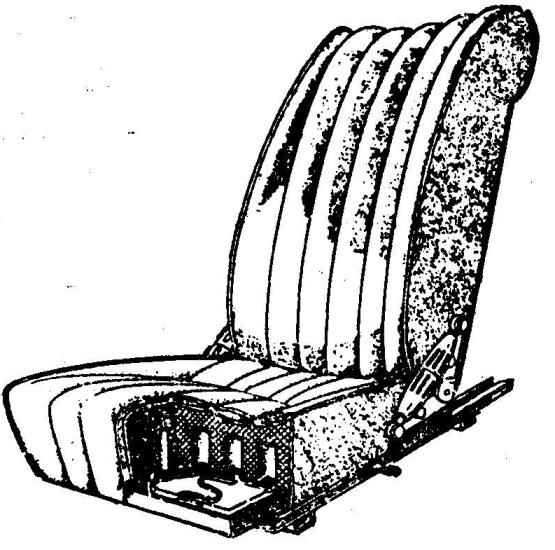 Here is, briefly, the past, present and future from Rafa, cars, slogan designers have chosen two words: “comfort” and “speed”.

What is today’s RAF with the design point of view, how it differs from his older brother?

About external forms will not speak: the drawings and photographs allow you to judge its current shape, and how improved the glazing of the cabin, outward visibility from the driver’s cabin separated from the passenger racks and handrails. Not smaller changes happened inside: the interior is much roomier and more comfortable, in the embodiment of taxis has increased due to this two more places. Much more efficient working and ventilation of the cabin — in older machines it is in the summer, caused complaints of passengers. The steel chairs, beautiful finish. 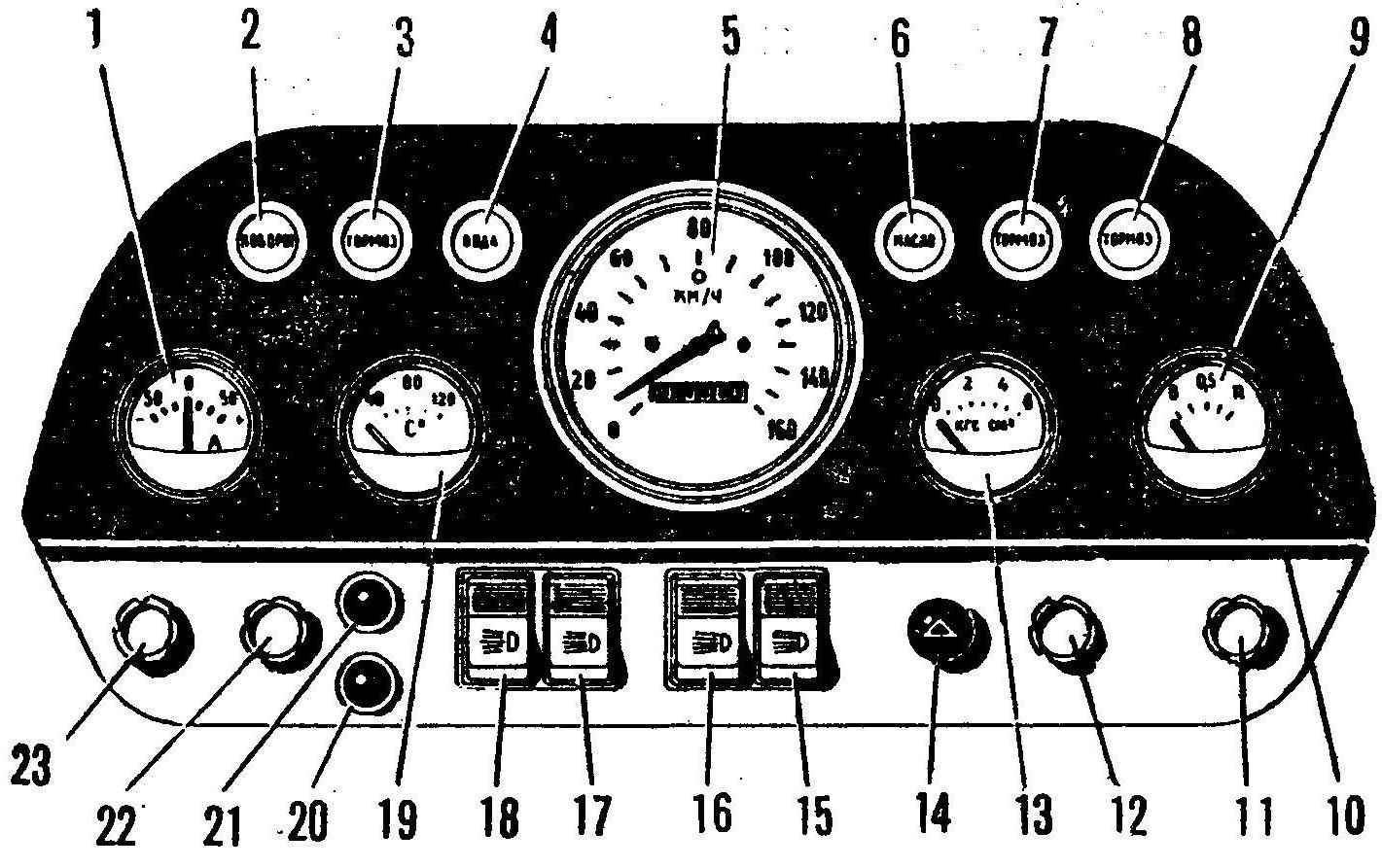 4 — temperature water in the radiator,

5 — indicator of the high beam, trip meter and speedometer

6 — indicator emergency oil pressure in the lubrication system of the engine,

13 — gauge oil pressure in the lubrication system of the engine,

17 — the switch of a lantern of light signalling

21 — the indicator of the switch of the Converter

23 — handle of the switch of a heater of salon. 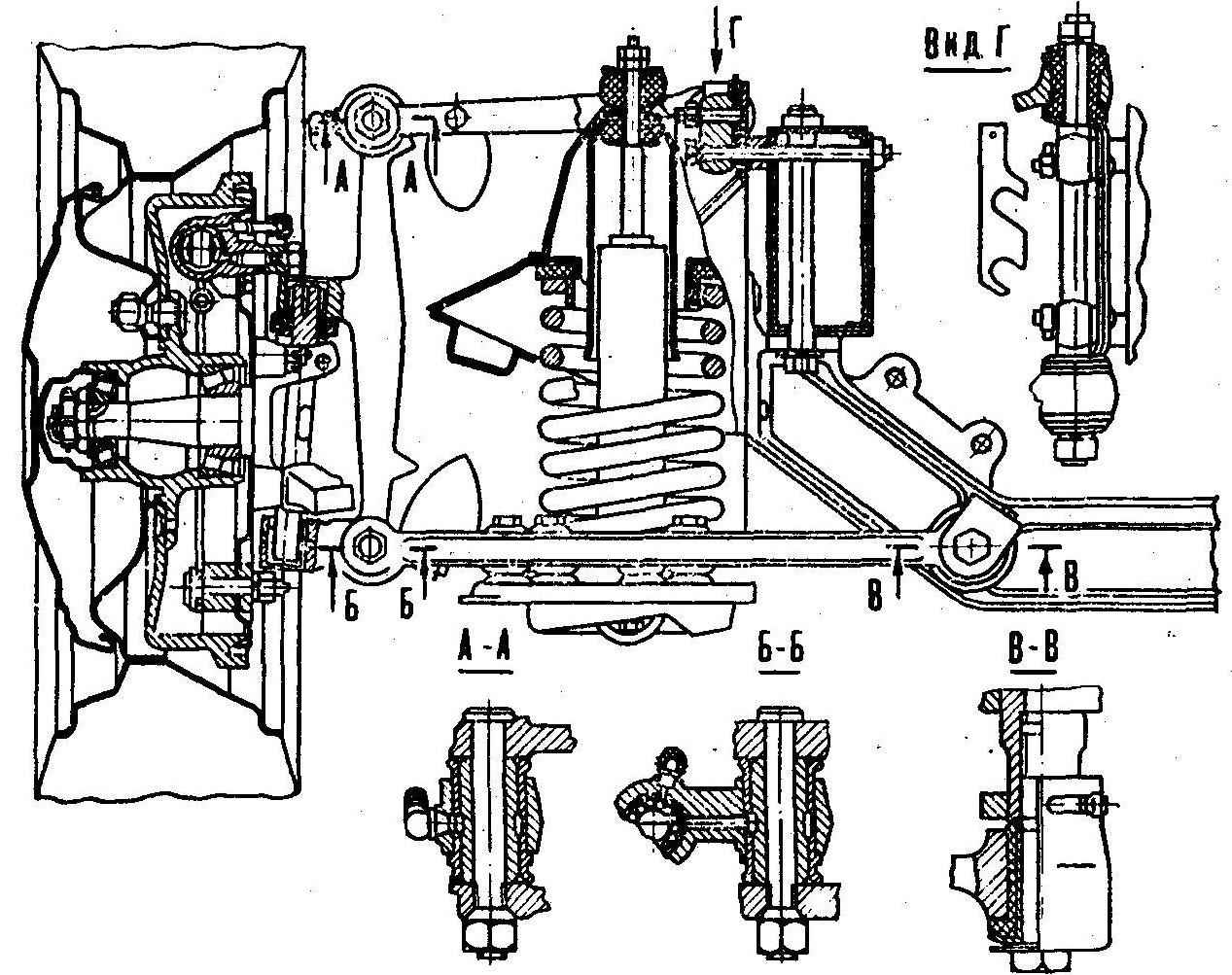 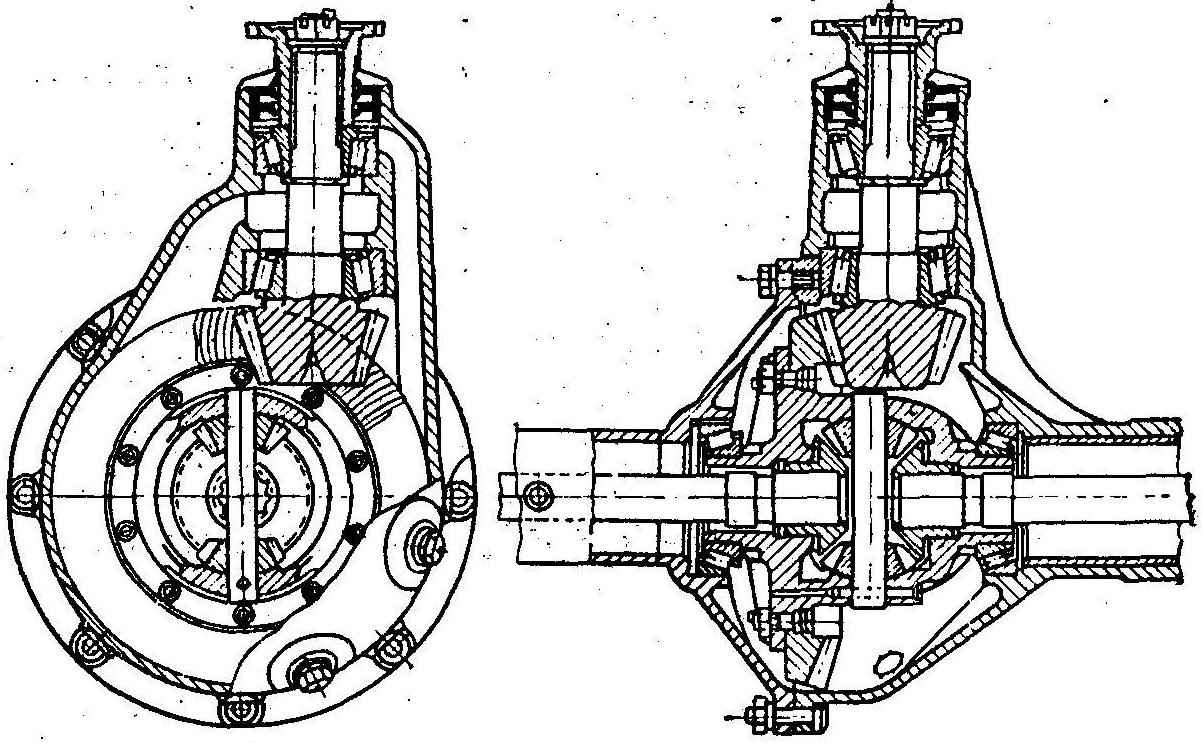 A more powerful engine combined with a soft suspension (the rear axle of the GAZ-24, front — OE design) have provided more speed and smoothness. Simply put, the car is now comfortable to ride, and service life of the van has increased almost in half.

All these qualities put together, especially distinguish RAF-2203 from his predecessor, when it comes to ambulance version: now you can place here everything you need for the emergency person.

And finally, the last thing I should say is the reliability of the new machine, achieved thanks to an ingenious arrangement of the power elements of the body and high-tech Assembly of the whole machine. No wonder the RAF “Latvia” was nominated for the assignment of the quality Mark. 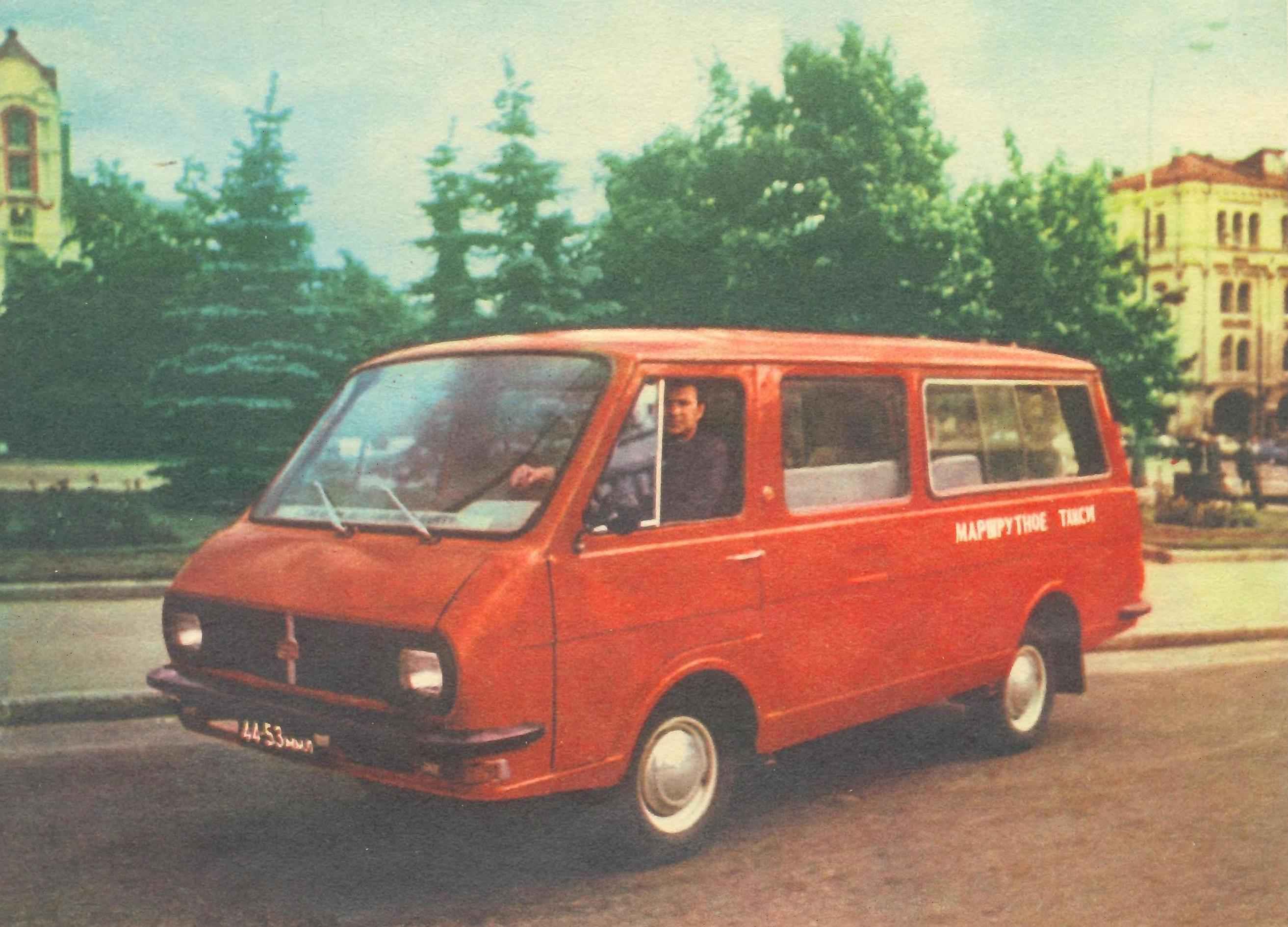