Successfully participated in Izhevsk in the Russian tournaments (1978) on experimental models of type “a flying wing” command of Leningrad. All the participants become winners.
For the first time in the “Experiment 78” started model airplanes-students. Leningrad and was here first. Today we offer readers two models: “dimerco” M. Prokhorov (1st place) and glider A. Pashkina (2nd place).
Model glider “flying wing”
The fuselage is made of pine plates. Wing installation angle 0° attached to it with pins made of steel wire OVS Ø 3 mm., the keel is made of plywood with thickness of 3 mm. It is bonded to the fuselage bottom for ease of tabulation control linkage model with torque on the guard rails.
The wing consists of supporting part and endings. It is collected from pine slats and ribs carved from Linden veneer. The leading edge is balsa. The end ribs are made of plywood with thickness of 3 mm. Ending attached with dural pin Ø 6 mm. Forced descent are rotated by an angle of 90° to the horizon. 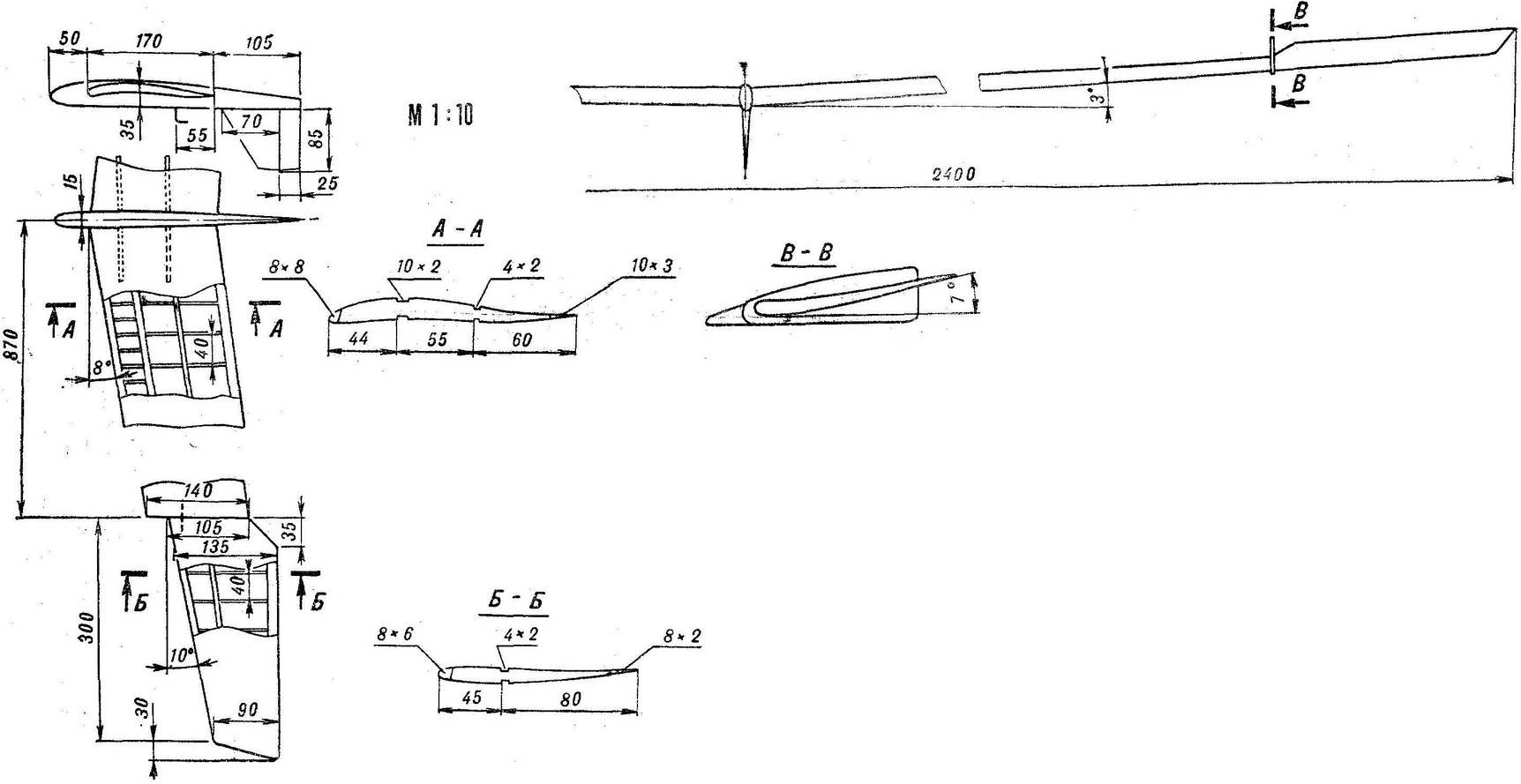 Model glider “flying wing” A. Kashkin.
The profile of the bearing surfaces are S-shaped. Its coordinates are given in the table.
The coordinates of the airfoil

Profile ending Б6356 installed bulge downward. Flight model is characterized by a good start, smooth toke on the guard rails and sustainable free planning.
Timer model of the “flying wing”
The fuselage consists of a pylon and the tail boom. Pylon cutout to set the timer and mounted on this motor mount is made of plywood with a thickness of 8 mm. On the last fixed top fairing made of pine, bottom is attached to the end ribs of lightweight Linden and pine sticks, which are beyond the pylon the tip sawn off. This is done for ease of wing mounting and motor for better aerodynamics and mass balancing models set the cylinder down.
Beam of the fuselage of planed pine slats and inside lightweight. Keel — stacked, too, from pine slats and ribs carved from Linden veneer. His profile is symmetric, 6%. The rudder is made of foam, the edges are covered with pine rail.
The wing consists of two parts — a carrier and stabilizing collected from pine slats and lightweight ribs (plywood with a thickness of 1 mm). Ribs made of plywood with thickness of 3 mm, the struts are made of steel wire Ø 2 mm (elements — of duralumin plates with a thickness of 1 mm).
For a tight joining of the wing to its end the ends have hooks made of steel wire Ø 1.5 mm, the rubber pull the wings tight to the ribs of the fuselage. The stabilizing part is mounted fixed round dural pin. To install the angle on the end bearing surface are the clips.
Both parts are tightened the rubber, which simultaneously serves to rotate 90° to the horizontal stabilizing pieces when forced descent model. 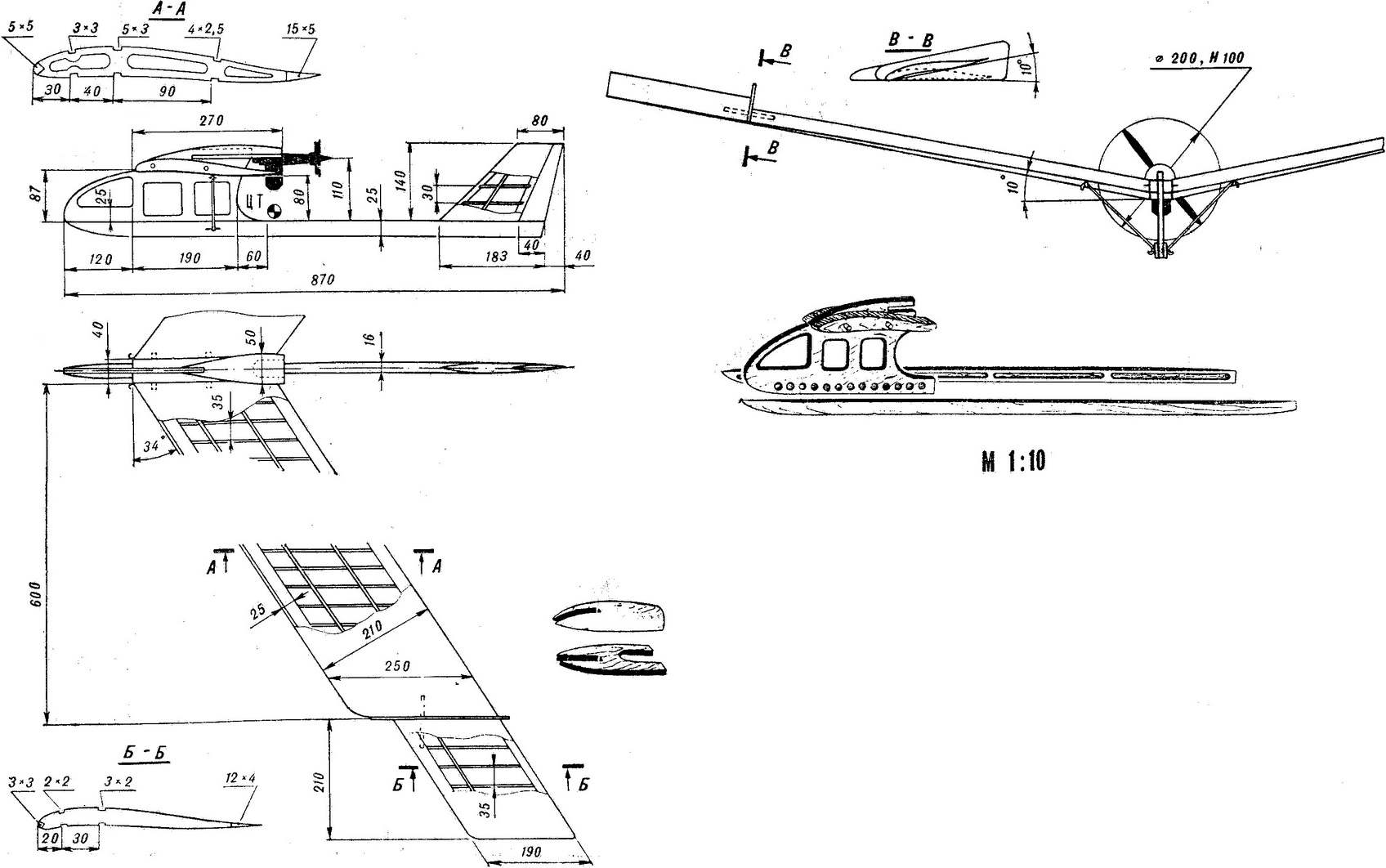 The coordinates of the airfoil

The “flying wing” Prokhorov used the standard engine KMD-2,5. Screw pusher Ø 200 mm with step 100 mm Weight — 900 g.
Her flight is in the motor mode with the right turn, and planning — with the left.