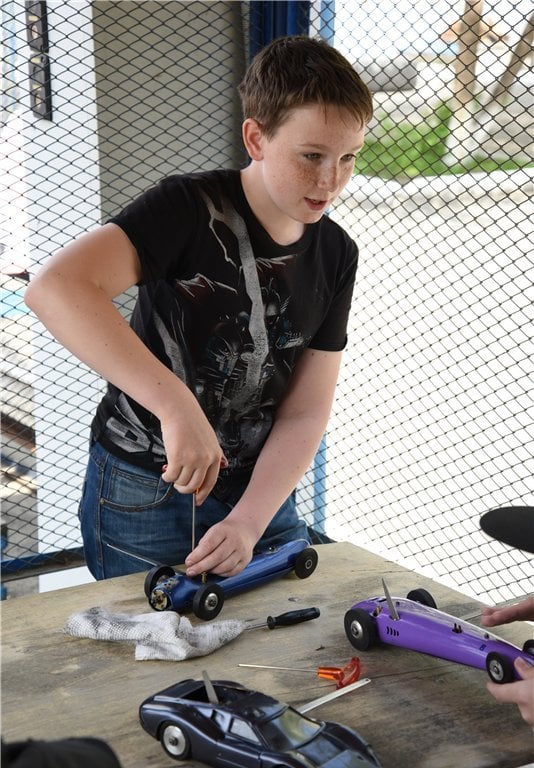 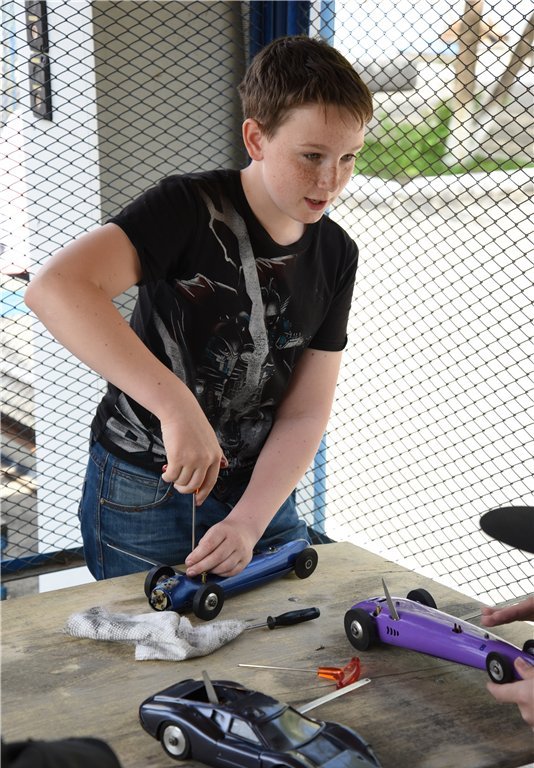 When we sometimes hear the term “Automodelisme”, most often remember the boys with the excitement of chasing RC cars. Indeed, in recent times RC automodel sport has become probably the most popular model hobby. But it was not always so. First was speed, cord automodelisme, which appeared when the radio was out of the question.
Why self-similar sport has emerged as a high-speed, it’s probably understandable. Athletes modelers (they are athletes) in the first place, it was important to test the model at maximum speed. But why the cord? The fact that race on speed needs to meet certain requirements. This is, first, perfectly smooth and quite a long way, secondly, the creation of conditions for the motion of the model along a straight line, thirdly, ensuring a normal start, acceleration and most importantly braking. Finally, the safety of athletes and spectators. It was a very difficult, exacting requirements. And then it turned out that all these problems can be resolved if you organize the models around. The only thing that had to go is to attach the model of the thin wire to the center of the track. This wire is called a filament cord, or a simple Korda, which gave the name to this sport. Thus arose the self-similar sports. It happened a long time ago, back in the thirties of the last century. The idea is to put the model in a circle was the perfect solution as contributed to the fast development of this sport.
If you have a desire to assemble a model airplane or helicopter, I advise you to turn to the online store of model kits and see the assembled model aircraft.
The competition is now held on a concrete track with a diameter of 20 meters, with the center in the form of a vertical rod, to the rotating leash which attached cord thread. On the other hand this thread is attached to the model. Cord thread is a steel wire of diameter from 0.8 to 2 mm (depending on model class), which not only ensures perfectly smooth movement, but also allows us to give a model the desired acceleration and slow down its progress (at the end of the check-in or when all sorts of unforeseeable situations). All these are the responsibilities of the assistant of the athlete, which is called the horser, or in Russian “rascruci”. It is situated in the center of the circle and is the second rider after the current face of this, we can say, self-similar representation. The main task of raskrutka is to help the motor to gain operating speed. The fact that the model has no gearbox and, without help, to go 40 – 45 (!) thousand rpm she either can’t, or it takes too much time. The athlete starts the model “pushing” it, driving it around the track using a special rod, resting it in the body of the model. 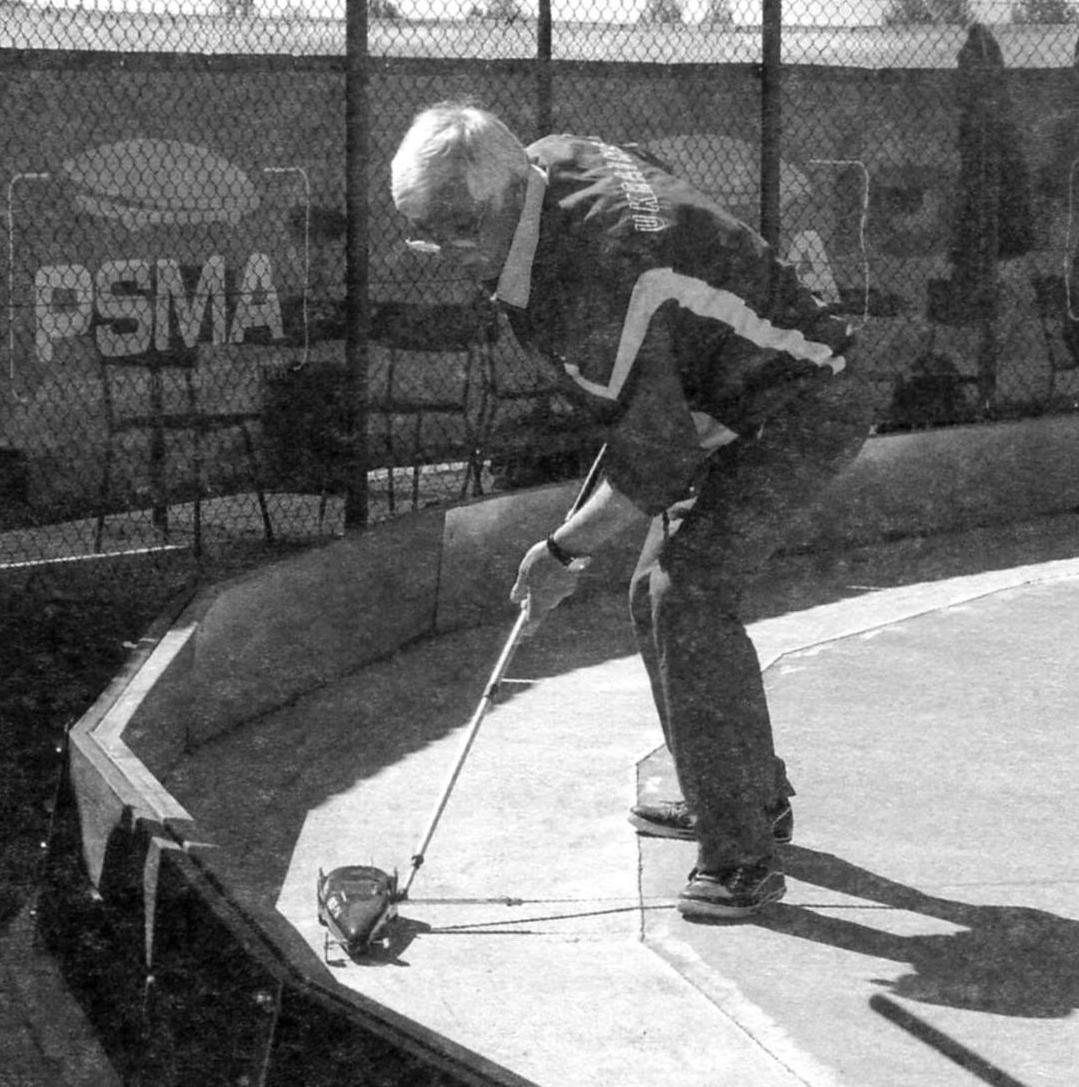 The model launch. (I. Safyanik, Ukraine)
So, the model in motion, horser helped the model to gain momentum, and now he, to avoid the rotating cord, takes place on a special circular platform over the Central device. After raskrutki jumped on this platform, and the model is in motion, stopwatch, chastised allowed three minutes, turns off, and the athlete must make a decision about the start by pressing a special button. (It is often red in color). This time, the driver identifies himself, focusing on speed readings on the scoreboard and on …the sound, flying in the Assembly model. In General, the sound in the process-in plays a big role. The fact is that at this speed (circle model is less than one (!) second) the model itself is not visible. Visually about her presence on the track can only be judged by the exhaust gases, remaining on track. But the sound of her (quite loud) could be heard very well. Here on this sound, but rather a squeal (because the speed of modern engines, as we have said, close to 50 thousand rpm), the athlete and judges not only on the motor, but also on the functioning of the other components of the model. During the race musher has the right to stop the model, change the adjustment of the motor and run the model again and so several times in the allotted trying time (and the amount of fuel in the tank models, of course).
After the start of the model needs to go a certain distance, after which it needs to be stopped. This is done with the help of… ordinary household broom. For this purpose, the model is equipped with a special device that shuts off the fuel supply and thereby suppresses the engine. The antenna of this device a few inches protrudes from the body of the model, the impact of the soft part of the twigs caught in its path, time of falls, translating a stopping device in the position “Off”. 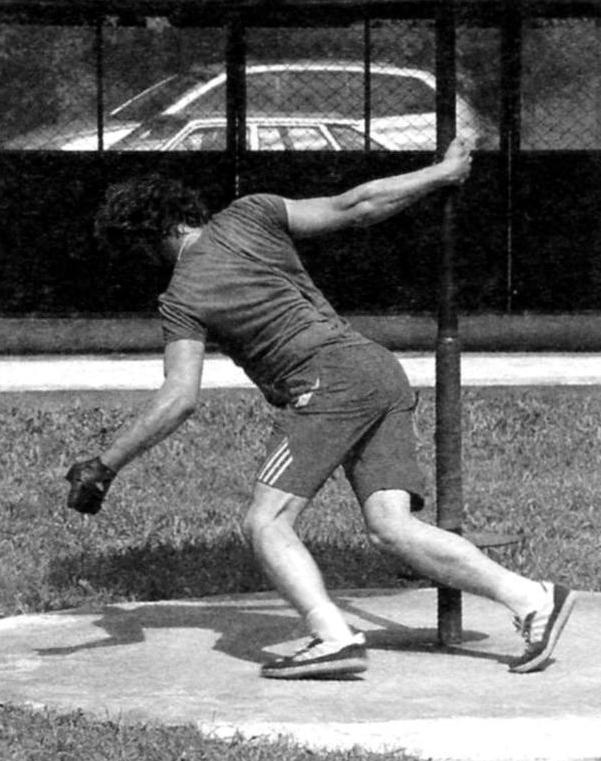 Raskrutki must be in good physical condition. (A. Michalik, Ukraine) 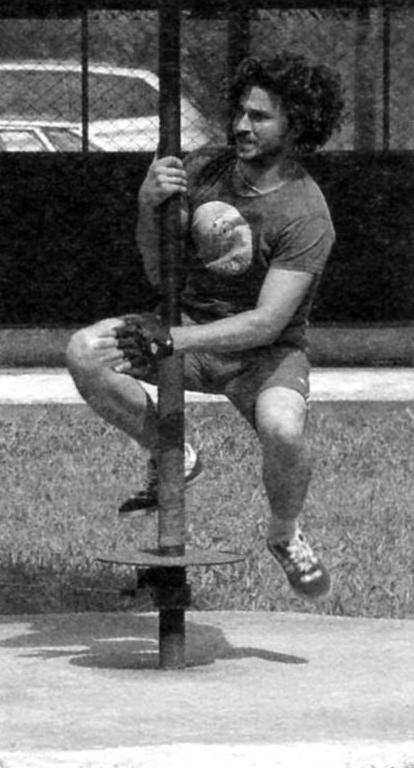 The dynamic moment, raskrutki jumps to the site
The result is considered the average speed for a distance of 500 meters (8 laps), which is defined in km/h with precision of the third sign. Competitions consist of two or three races in the standings is the result of the best attempt. Maximum speed (best lap) at the event is not recorded.
Now more about the track, or just a rope (not to be confused with the court on which to play tennis). This is a very complex technical construction, the construction of which is very hard. The main objective in the design and construction of self-similar Assembly – is to ensure the perfect horizontality of the track and is more than perfect surfaces concrete paths. No the most perfect road surface, even covering tracks “Formula 1”, can not be compared with the ideality of the track Assembly. You just compare the diameter of a vehicle wheel in the 70 – 80 cm and a wheel diameter of cord models-50 – 80 mm, and it becomes clear that even a roughness of 2 – 3 mm may cause a failure in the motion model, is fraught with loss of speed. Therefore, the track Assembly is the subject of special attention and respect to the organizers and participants. In between races polluted the track thoroughly cleaned, washed and then dried. Periodically, the levelness of the track and the ideality of its coverage is checked with special devices, if necessary the track refreshed and polished.
But let’s get back to the model. Of course, the heart of the model is high-speed motor. This is a single-cylinder two-stroke internal combustion engine. He, surprisingly, is simple – the cylinder, piston, crankshaft, valve timing and a simple carb -jets. But in this simplicity lies the great mystery, because the engine (together with the resonance tube) is 90% of the results of the model. Of course, no motor, even the League itself is no guarantee of a championship result. Motor needs individual fine tuning, which depends on many different factors: temperature and humidity, atmospheric pressure, quality and condition of paths and many others. And these secrets racer learns throughout his sports career, and even athletes with a great experience can’t say that they perfectly comprehend all the wisdom of the settings. 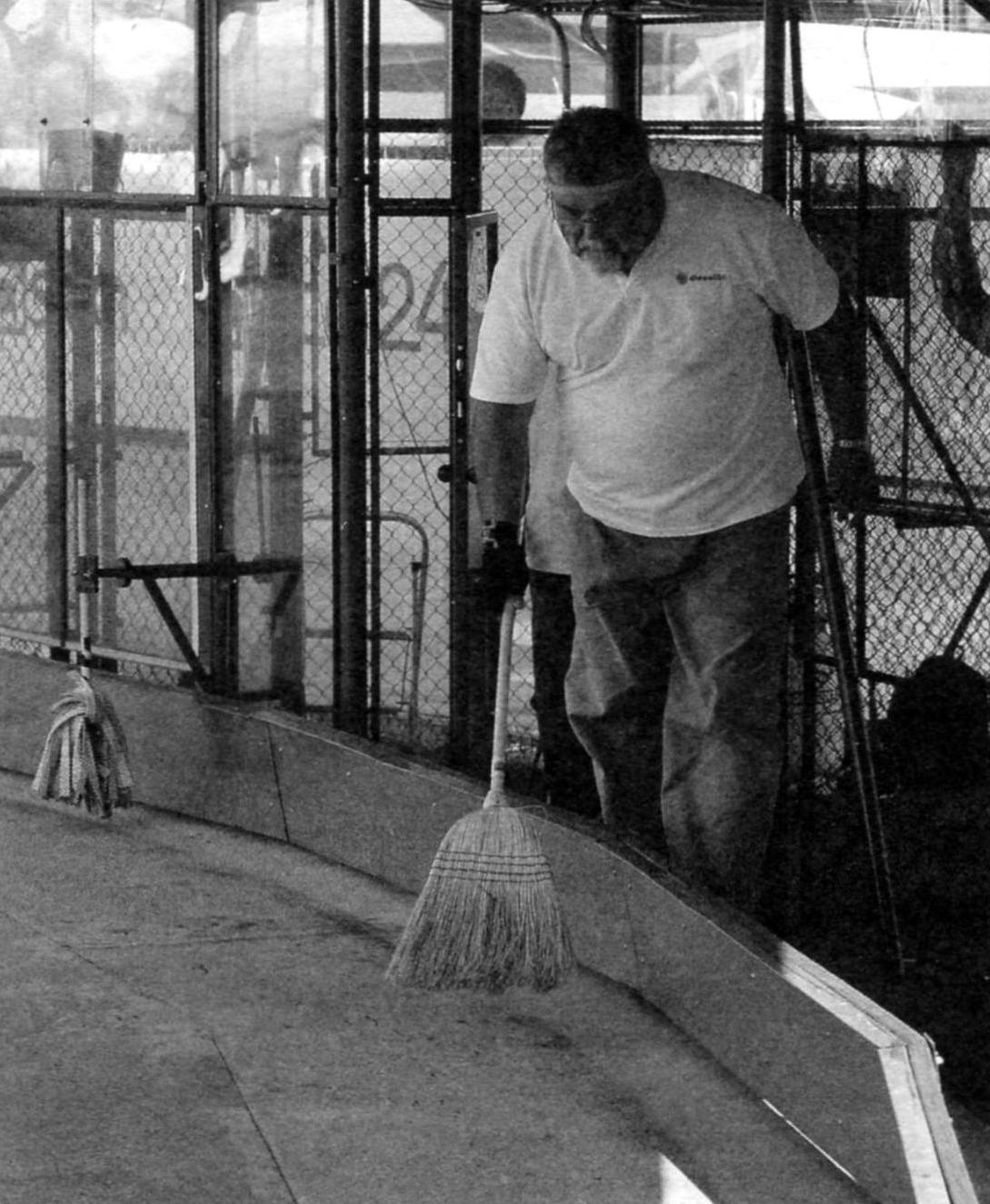 Stop the model by a broom. (Dobrosi, Hungary). In the background – a mechanical broom 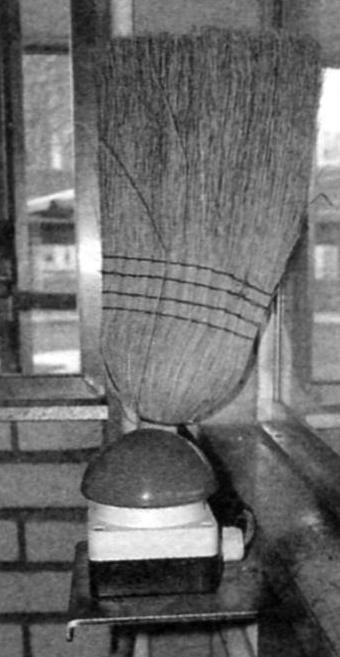 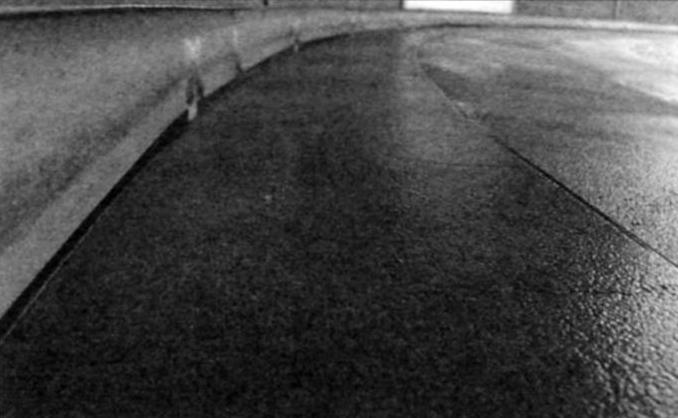 The track Assembly. (Tallinn, Estonia)
Since the aim of the competition is to achieve maximum speed in a short period of time, then, of course, have the engine configured in this mode, there are only two possibilities: either to show a new result, or… break, unable to withstand extreme loads. But even if the engine and came the whole, it is still necessary to disassemble, thoroughly rinse the parts, carefully inspect and replace not only worn, but other, causing the slightest suspicion. The same applies to units and parts of the model itself. And this time the Modeler from check – in until the check-in- usually not more than an hour. Therefore, among other things, the athlete should be able to “field” conditions to quickly disassemble and reassemble the model, while taking the right decisions for setting up the model on the next race.
Kordovye models are divided into classes according to engine capacity. It is 1,5, 2,5, 3,5, 5, and 10 cm –3. The weight of the model, depending on class is from 1 to 3 kg. Modern models have an elongated, rakotoarisoa the form with the most narrowly spaced wheels, which are completely hidden in the housing. At high speeds depending on the class model is at the moment, from 268 (class 1.5 cm3) up to 345 km/h (10 cm class3). 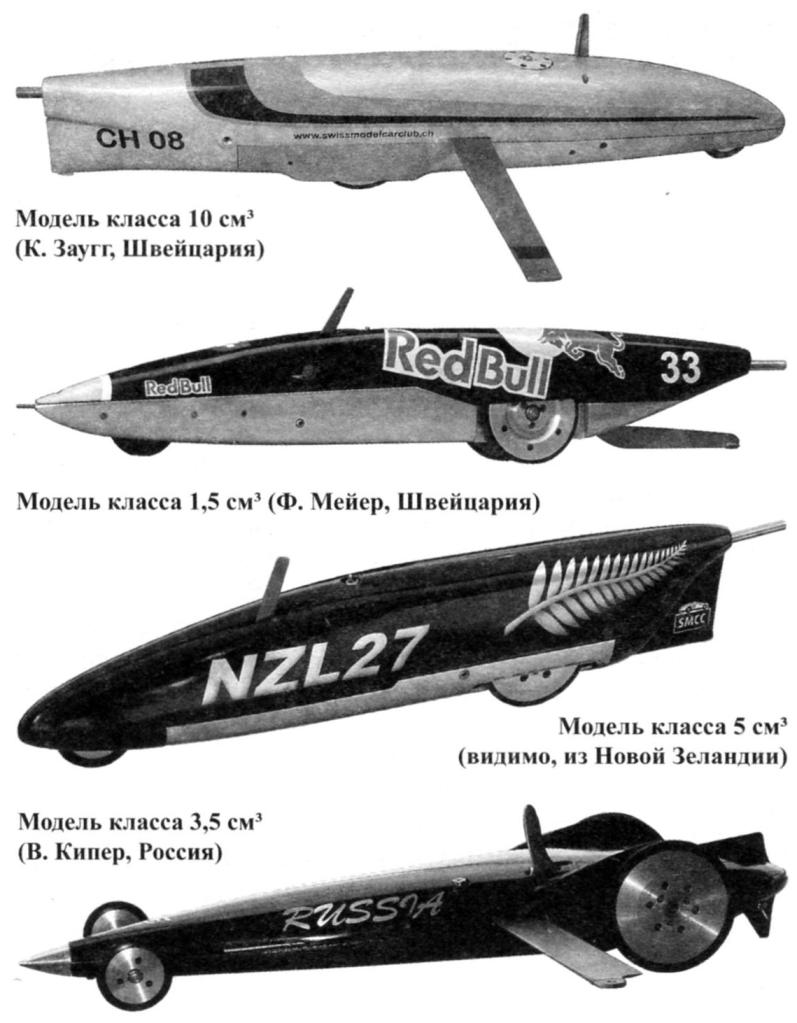 The creation of the córdoba model is not easy, and at the present level of technology is not one person. Therefore, individual athletes, having good industrial experience and having the appropriate technological conditions, become small-scale producers of individual components and parts for other riders. In addition, it is possible and to buy the finished model, now it is not considered shameful even for top athletes. (So learn the beginner basics of auto modeling sport is currently much easier).
It would seem that science could help in the design and construction of models, however, motor sport is not true. Self-similar development of equipment exclusively by sequential assimilation of long-term developments of the previous generations of athletes. Improve the design of the cord of the model takes place gradually, step by step. Attempts to bring science to a self-similar activities were many, but they never led to positive results. At the same time, models made, it would seem that in such a crude way, are particularly great examples of engineering, and the achievements of the sport of model building are largely inaccessible even for the large engineering. For example, a liter of motors ‘ power cord models reaches a fantastic figure 700 – 900 HP (!) And this despite the fact that the engines only work on the standard, without any additive, fuel (80% methanol and 20% castor oil). Moreover, it is not a science and modern technologies help the self-similar sport, but rather, on the contrary, in recent years some of the most successful athletes modelers were invited as experts on a modern high-tech production and the laboratory.
With regard to the situation Cordoba automodelisme among other model sports, then, unfortunately, it’s not very popular and very small sport. (But it is no less fun and exciting). In the world about 15 countries where it is cultivated cord models, each of them doing one (!) hundreds of athletes. National Championships are harvested usually 30 – 60 participants, world and European Championships – 120 – 130. 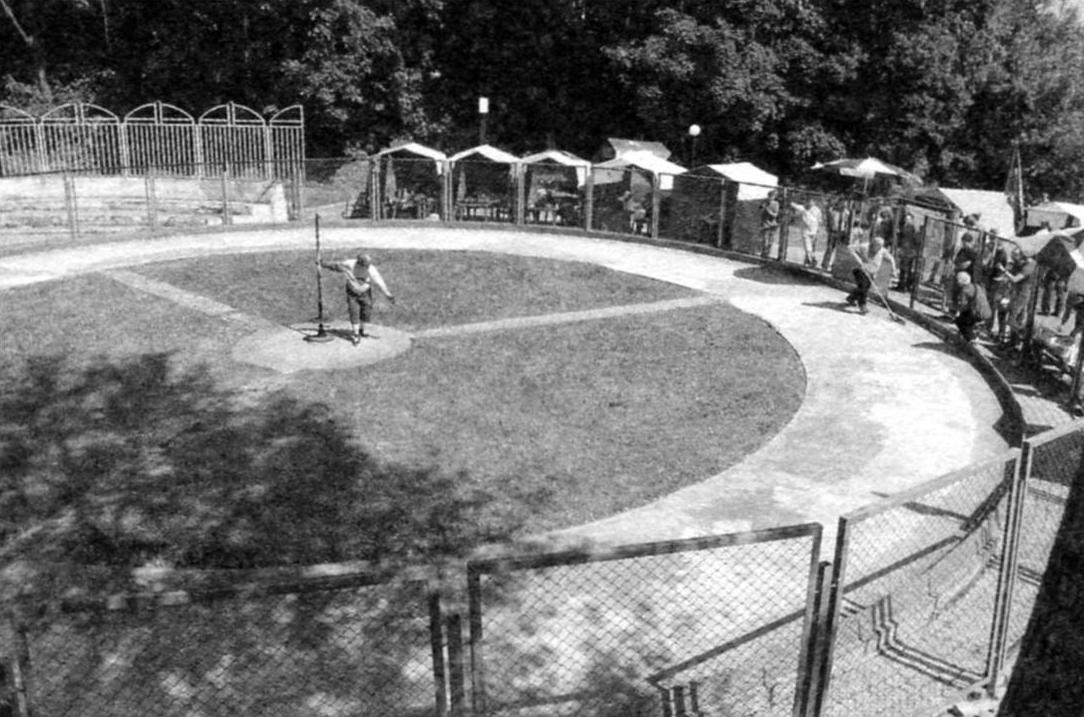 The track. Working time (Bryansk)
Avtomodelisty-conovici United in the International Federation of auto modeling sport – FEMA with headquarters in Switzerland. The European competition includes FEMA annual Championships, but the world Cup is held once in three years. The fact that, in addition to European countries, cord self-similar sport is cultivated in the US and in Australia/ New Zealand. In addition to the European and world Championships where played a personal and team championship, there is a system of Grand Prix that are held from may to October in different countries-members of the FEMA. In Russia annually hosts international Grand Prix, as the country has repeatedly hosted world and European Championships. And yet, on the competition. Unlike other sports, men and women, youths, adults and veterans are together, dividing by gender and age no. In short, Cordova the modeling is for all ages!
In this article, we briefly introduced You to an unusually interesting and exciting, but little known sport. The editors hope that Your interest in Cordova the modeling will contribute to the continuation of this theme in the pages of “Modeller-designer”.
L. SPRINTS