Fig. 1. Scheme dredgers in operation:
1 — suction head 2 — capstan, 3 — pressure slurry pipeline, 4 — pile move 5 — floating slurry pipeline, 6 — geothermal heat pump, 7 — suction pipe, 8 — piece.
Young engineers — laboratory staff Nicolay Puzyrev and Constantine Pavlychev — preparing equipment for experiments. I was asked to talk about recent achievements of the laboratory. Bubbles — he, by the way, Deputy Secretary of the Komsomol organization of scientific-research sector of the Institute postponed the device detail and brought some cutters with a diameter of two feet or a little less. But this, of course, were not real instruments, but just models them. Real — weighing several tons and several meters in diameter — just a crane and can be raised. And they differed by the shape of the surfaces, cutting the ground.
The fact of the matter is that the cutter created in the Kalinin Polytechnic, not only cuts the soil, but moves the sliced layers in the suction area. Cutting edges are even and the guide. Moreover, in this form guides the primer to not stick. Test dredger, equipped with new mill showed that the capacity is increased by 20-30%.
And if you have to break the stony soil? For this purpose, the laboratory has developed a milling cutter with teeth. The tool consists of two parts: the base and the ring gear. When the crown wears out, it can be removed with a blowtorch n to acquire a new one. When tested as a control specimen was taken by the Dutch toothed cutter. Known fact: the Netherlands is land reclaimed from the sea. But because of the jetting technique developed very much. And that’s what the experiment showed: the efficiency of the dredgers equipped gear cutters KPI is increased as compared to those that equipped the Dutch gear cutters, 1.5—2 times.
What to say: to destroy the stone — it is very difficult. But it’s hardly easier to remove the soil in grassy thickets. The grass is wound on the cutter, clogging suction device, productive work is impossible.
— And how many in our country places like this? I asked Irina Evgenyevna Sabatino, too, young engineer of the laboratory. The question, as I have a few minutes I realized I was naïve, but she not laughed, and put on the table a few photos. The track being built the channel Dnepr — Donbass. Its economic importance is huge: the industrial Donbas is suffering from lack of water, the channel is designed to solve this problem.
— And that is where the bare steppe land and start grassy jungle — the coast of Oralce, — said Irina. — See.
In the summer of 1974 in these places worked expedition of the laboratory of dredging of the Kalinin Polytechnic Institute. Experienced a brand new ripping device — type BFR — speed milling Ripper (Fig. 2). It consists of two drums rotating towards each other. On the surface of the drums — the sharp edges, circular in plan, trapezoidal in section. These ledges and grind the grass, and even trees, turn them into a solid mass, it is convenient for transportation, and a suction device. 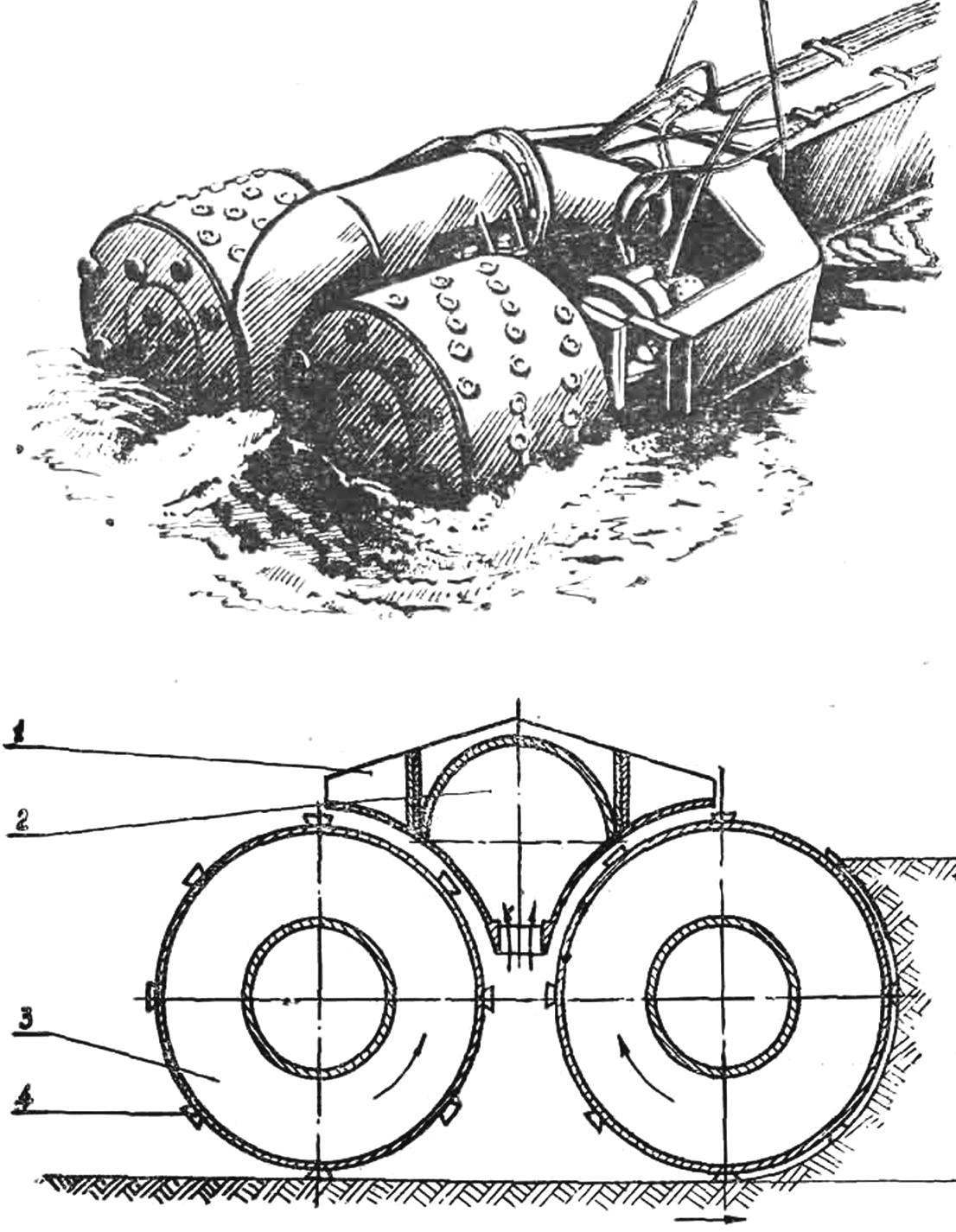 Fig. 2. Milling Ripper:
1 — housing of suction device, 2 — suction pipe, 3 — reel, 4 — cutting device.
Worked with senior laboratory staff, and young. A graduate of Nikolai Morozov, a Komsomol member, I dedicated my graduation project. The test results showed that the timber cut on the splinter, and about the grass and say nothing. A dredger with this double-drum high-speed milling cultivator can easily to develop soils, weedy grass and trees in front of them recede even rock mills.
Another interesting focus of the laboratory — magnetic treatment of the pulp. In the alluvium of weirs, dams, bridges, when performing Stripping operations on a large scale, when large masses of soil are in gidrootval, it is very important that the soil quickly donkey, and the body structure was dense and strong. But the fine clay particles settle very slowly, poured out the water blows back up to half of this soil, and suction dredges, repeatedly pumping it, making useless jobs, and that settles, remains loose, easily carried away again. The timing of the works from this increase, performance decreases, the cost of construction is increasing.
Experiments conducted by the laboratory, are that the pulp passes through a magnetic field. And here is the result: the rate of deposition of particles sharply increases, sediment becomes more dense.
THE MOST POWERFUL
from manufactured in our country is a dredger 1000-80. More than 5 thousand kW — total power of its engines; 800 thousand m3 of soil per month — performance; range of application — up to 4 km. These figures give a visual representation of the power of the machine.
Here are a few more specific technical data. Cutter diameter — 2.7 m; speed of rotation — 12 or 18 rpm body Length — 45 m; width — 12 m; height 2.2 m. the pipe Diameter of the floating slurry pipeline is 800 mm. Maximum depth at which it may take land, 15 m, and maximum width of the development at this depth is 53 m.
Where else will you find cutting tool with a diameter of almost three meters? Such a mill only a tap or a powerful winch to raise. In the engine room of dredger has its own overhead crane with 10 tons lifting capacity. It is designed for installation of heavy units, but can go on the foredeck to lift out of the water the parts suction head.
The hull of the dredger has a rectangular shape and is divided into 10 compartments, isolated from each other. To move independently this giant: it tows the boat with the engine in the 100-400 HP And a dredger stood on the site of the works motionless, in the bottom hammered “peg” — metal pile Ø 102 mm, a length of 27.6 m and a weight of 22 tons.
To drive to the bottom of this “peg” or to pull it out, the dredger has a powerful lifting device.
FOR CONSTRUCTION GIANT
The time is approaching when the vast Siberia, Central Asia, Kazakhstan will unfold work on an unprecedented scale. The State Committee of the USSR Council of Ministers for science and technology at one of the meetings discussed the plan of scientific-research and design work for the feasibility study the first phase of the transfer of part of Siberian rivers in the dry region of Kazakhstan and Middle Asia. At the IV all-Union hydrological Congress, this issue was raised in one of the reports.
Preliminary calculations showed that the construction of hydro-technical facilities under this plan have to take about 30 billion m3 of the earth, and pour about 4.5 billion m3. The amount of concrete work will reach 100 million m3. But the concrete must be secured in sand and gravel.
What are the machines for this purpose need? Giants dredgers with capacity up to 10 thousand m3/h. This means that they will have to provide such a fluid flow, a never gave, say, the Moscow river before the construction of the Moscow canal. To these machines to create, you need to solve a range of complex scientific and engineering problems. You envy those young engineers who have to do it.

Fig. 3. Mnogozubkovoy the dredger “Dnepr”
Another important technical problem.the creation of funds for the development of soils at great depths, which so far is limited suction capacity of the groundwater pumps. They still are not subject to depths in excess of 17-18 m. A large hydraulic engineering it is often necessary to develop the soil to much greater depths. Also, sometimes you need to get the sand high fineness, and its value also increases with depth.
One way of solving the problem is to bring the dredge pump directly to the place of extraction of soil, that is, to plunge him under the water. This is what made one of recently tested structures. A dredger with a submersible dredge pump showed a capacity of 700 m3 of soil per hour. The pump is mounted directly on the frame of suction head and motor, which is located above the water surface to the pump stretches a long shaft.
Much more effective than the same problem will be solved if not only the pump, and the whole dredger is immersed under water. This is one of the urgent problems of scientific research. Scientists want to create an underwater dredger that can move across the bottom of the reservoir. Manage it it will be necessary from the shore or from the water surface by means of automation and telemechanics. On the shore will stand the remote of the television screen, and the operator will be able to see how the car somewhere in the depth of 50 m. From the panel to the underwater digger will go, the cables of power supply, control and management.
Such a machine would be much less than existing ones, because it is free from long and heavy grantsearch RAM, powerful ramapajama and other winches, enormous building. Today such a machine can realize until now, only in the model. But, perhaps in future five-year plan, which will outline the XXV Congress of the CPSU, underwater dredges will become a reality and will be common on new construction projects, including the giants.
R. YAROV