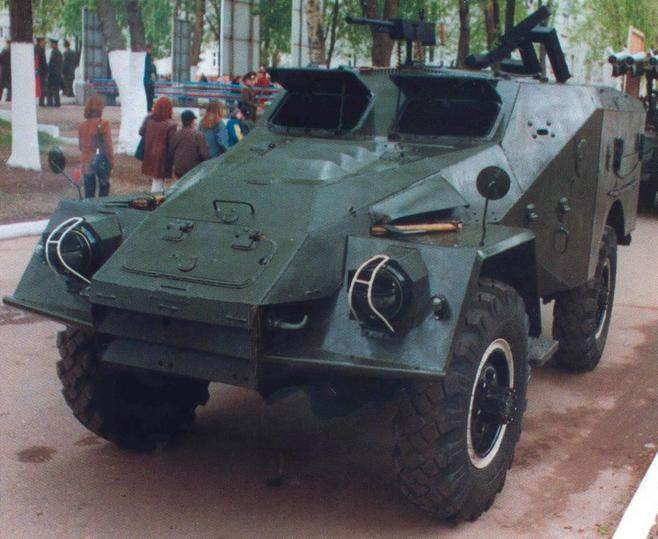 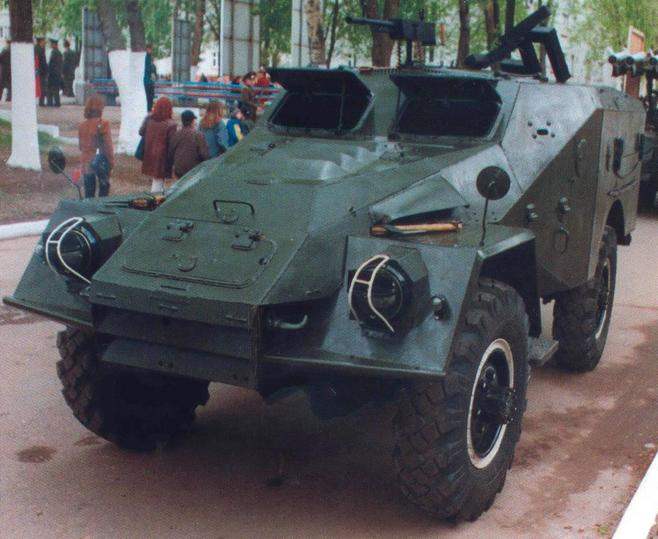 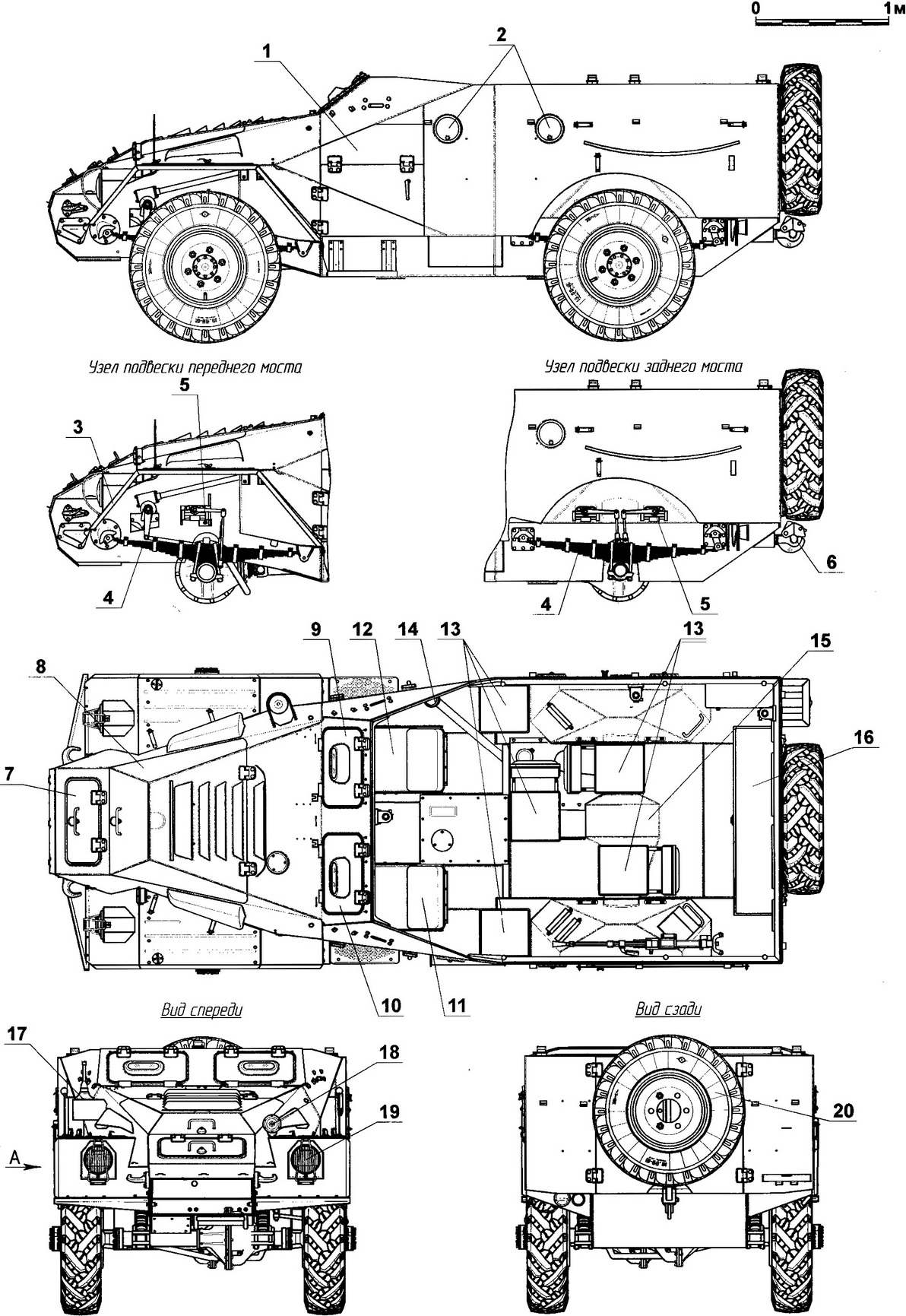 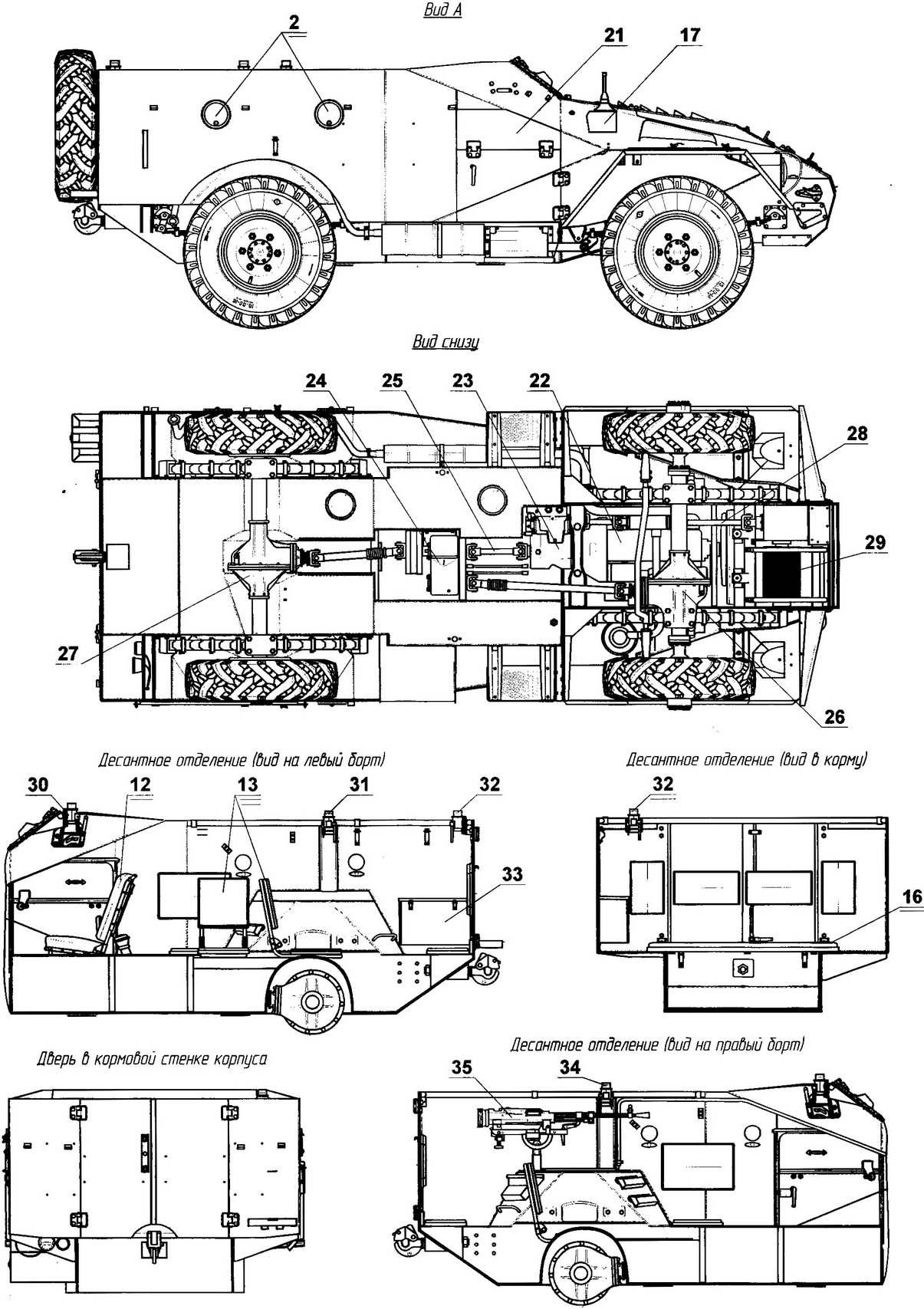 BTR-40:
1—left side door; 2—hatches for firing personal weapons; 3 — wing; 4—spring; 5—isolator; 6—tow unit; 7 — cover of the hatch to access the winch; 8—hatch access to engine; 9— the cover of the inspection hatch of the commander; 10 — cover of the inspection hatch of the driver; 11—the seat of the driver; a 12—seat commander; 13 — seat landing; 14—fuel filler neck rear petrol tank; 15—a niche in the propeller shaft; 16—seat for three people; 17—antenna input; 18 light; 19 light; 20—spare wheel; 21—right side door; 22—engine; 23 — gear box; 24—speed transfer case with dual; 25 — propeller shaft; 26—main gear front axle; 27—main gear rear axle; 28—drive winch; 29—winch; 30—swivel frontal bracket; 31 —right side-swivel bracket; 32—feed the swivel bracket; 33—raceway boxes with machine-gun belts; 34—left side swivel bracket; 35—laying machine gun SGMB in the position of travelling.
The first demonstration of a new armored vehicle to the public took place during a military parade in Moscow on 7 November 1951. To participate in the parade of armored vehicles was devouroil, apparently, to give a more impressive look. On the front the swivel bracket was mounted 12.7 mm DShK machine gun and two side — machine guns SGMB.
Almost simultaneously with the BTR-40 was a development of the modification, which received the designation BTR-40A. In fact, it was a self-propelled anti-aircraft installation.
Anti-aircraft guns, ZTPU-2 with two machine guns KPV 14.5 mm mounted on a pedestal in the troop compartment. The maximum elevation of the guns +90°, the declination of -5°. For firing at ground targets there was a telescopic sight OP-1-14, air — dot sight VC-4. Ammunition — 1200 rounds. The installation was controlled by a single gunner with a mechanical manual actuator. Part of the calculation consisted of two loaders (one per machine gun). Effective fire was provided at air targets flying at speeds up to 600 km/h at an altitude of 500 — 1000 m. the Horizontal range of effective fire was 2000 m.
BTR-40A was adopted in 1951, and a year later launched into serial production. Based on the BTR-40 was produced the machine chemical reconnaissance BTR-40РХ. It differed from the basic installation of the relevant equipment. The BTR-40 has quickly gained popularity in the army. Simple in design, small but agile multi-purpose armored vehicle created on the developed industry of automobile aggregates, is widespread in the army. It was used to transport infantry, was used as a tractor anti-tank artillery, and as commander, coherent and reconnaissance vehicle. The BTR-40 was operated in border and internal troops.
Baptism of fire for the BTR-40 was the events in Hungary in 1956. After them came another modification of the BTR — 40B had a welded hull with an armored roof. For boarding and landing in the roof were two large hatch covers akrivastina. Body height increased by 130 mm. was removed side brackets for mounting a machine gun and put two more loopholes in an inclined roof sheets. The roof due to the increased survivability of the armored personnel carrier, especially in the conduct of street fighting. However, the number of seats for the landing had to be reduced to six.
Around the same time there are a modification of the BTR-40B, has a centralized system of regulating the air pressure in the tires. The pumping system consisted of a compressor mounted on the engine, receiver, control valve and some piping. To each wheel from the outside through the hub is supplied air. Using this same system produced a reduction of tire pressure to improve the patency of the APC. The introduction of regulation of air pressure in the tires increased maneuverability of the cars and bullet resistance of the wheels. However, outdoor air supply had a low reliability, especially when driving through wooded areas. The armament of the BTR-40B was not taken in series production was not.
It is necessary to mention one more modification of the BTR-40 rail. This machine was a kind of brunettino. It was equipped with steel rollers with an inner flange that is attached to leans arms with spring shock absorbers. Movement along the rails provided the main wheels, and lateral stability — rollers. The time required for the transition to movement on the rails was 3 — 5 minutes. In 1969 the railway option was converted a few BTR-40 and BTR-40A. A number of these machines back in 1997 continued to serve in the TRANS-Baikal military district.
Serial production of the BTR-40 was completed in 1960. In addition to the Soviet Army, the BTR-40 was in service with the armies of the countries — participants of the Warsaw Pact, as well as a number of States, it is not included, e.g. Albania, Afghanistan, Vietnam, Israel, Indonesia, Iran, Cambodia, China, Cuba, Laos, Mongolia, Ethiopia and many other countries of Asia and Africa. In the armies of these countries, the BTR-40 and BTR-40A were actively used in local conflicts in the middle East, Southeast Asia and Africa.
In some countries, changed the armament of the armored personnel carrier. In particular, it is sometimes mounted a heavy DShK machine guns or other systems of foreign production. In the National people’s army of the GDR on the part of the machine mounted launcher 9П110 with ATGM “baby”. In Indonesia, the BTR-40 has also been upgraded significantly. Case closed roof, increasing his height. Weapons were placed in a rotating turret, the landing provided an observation slits with glass blocks, installed smoke grenade launchers. In Egypt in the 1960-ies under the obvious influence of the BTR-40 was developed the armored “Walid”, looks very reminiscent of it. However, when his creation used the chassis of a German truck “Magirus”, slightly larger in size.
Upon receipt of the service with the Soviet Army more modern BTR-40 was transferred from the infantry in with other troops for use as combat support machines, as well as for training purposes. In the internal military districts of the last modification of these cars served until the early 1970-ies. Armored personnel carriers removed from service Russian Army in 1993. 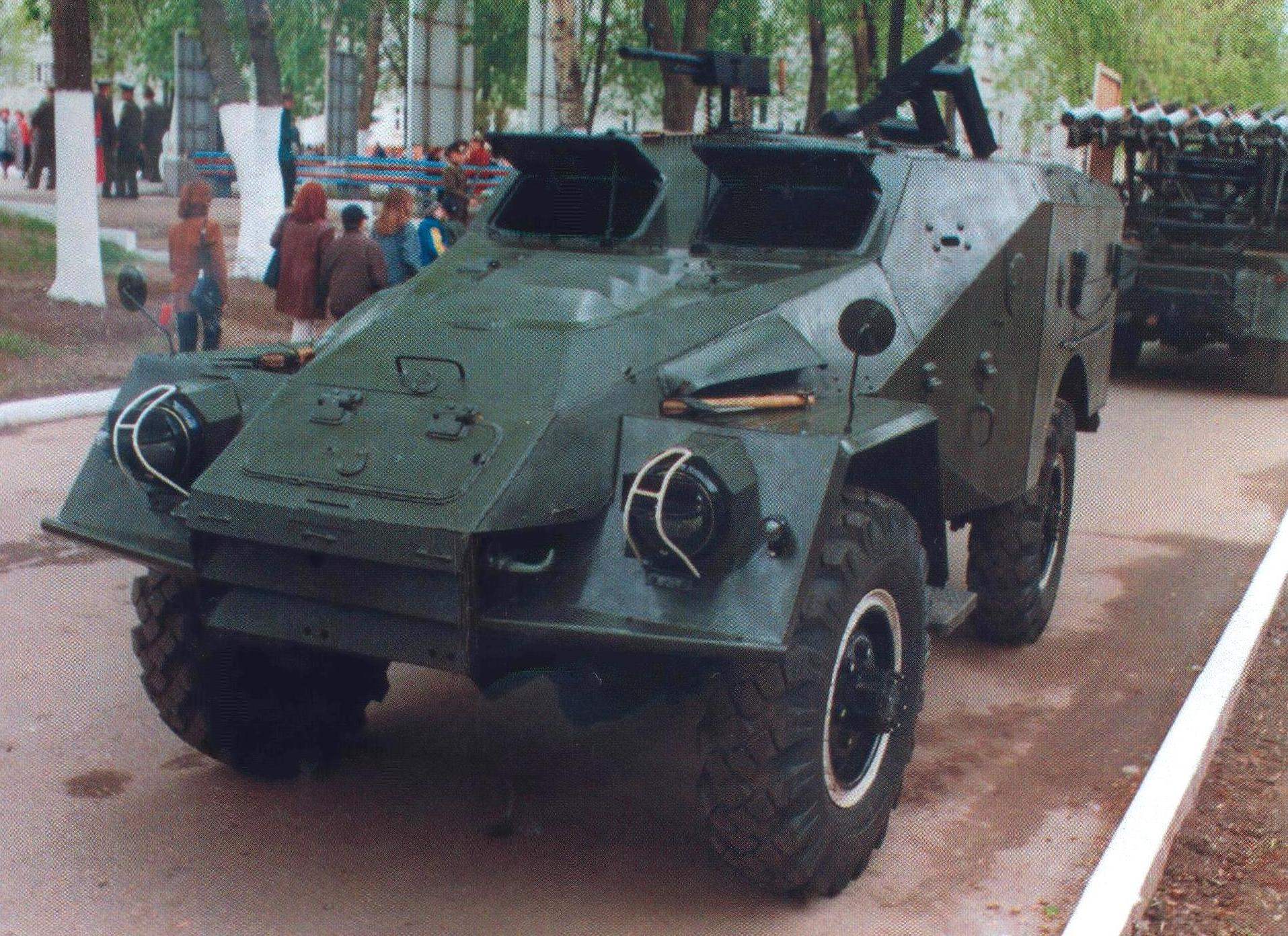 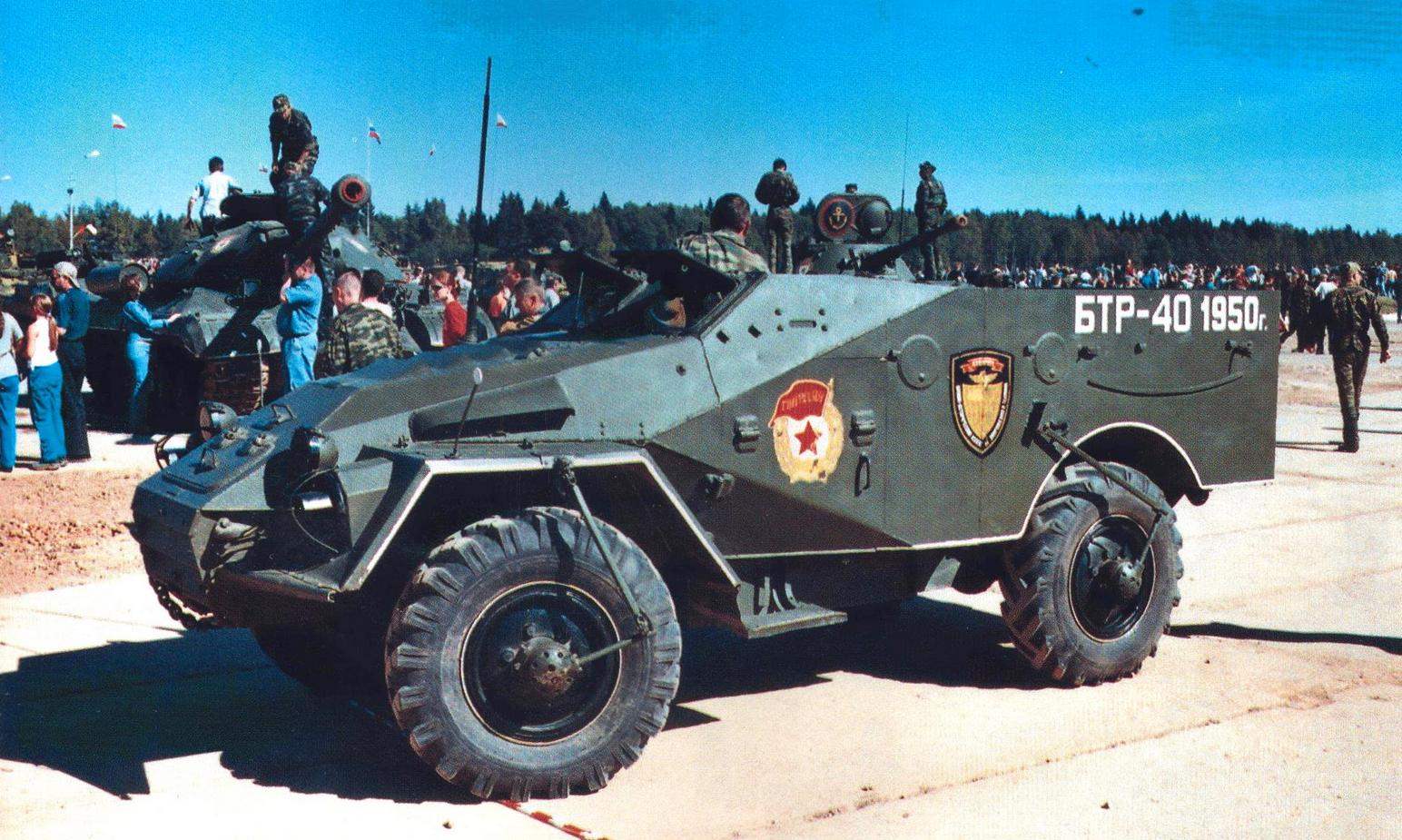 BTR-40V during the celebration of the Day tank in Kubinka. September 10, 2005.
M. BARYATINSKY