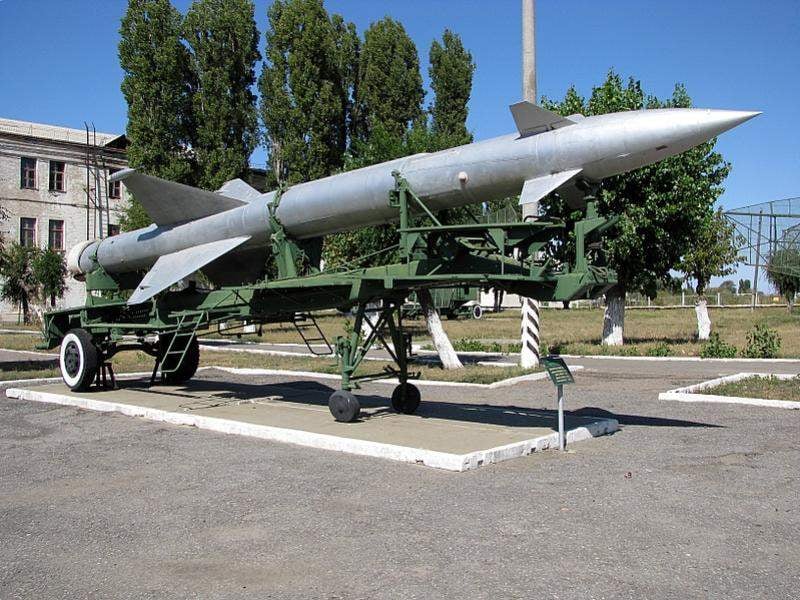 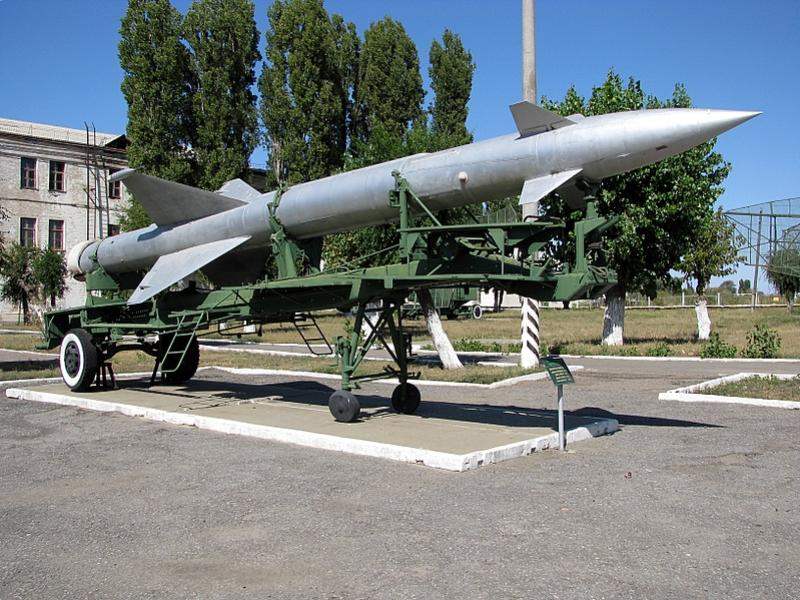 These missiles were never used in combat. Nevertheless, they played a significant role in the balance of power between opposing blocs during the “cold war”. The work done in NII-88 in late 1940s, reconstruction of antiaircraft missile weapons based on captured missiles “Wasserfall”, “Schmetterling” and others, led to the realization of the country’s leadership to the fact that the creation of such a complex systems like anti-aircraft missiles, it is necessary to unite efforts of the organizations and enterprises of various ministries and departments.
It was recorded in August 1950 the Government Resolution on the development of the first anti-aircraft missile system “Berkut”. As a lead developer chose the KB-1, who had experience of creation of missile weapons Led the development of S. Beria, P. N. Kuksenko and A. A. Raspletin. In the “Eagle” was part of the detection system on the basis of radar, A-100, radar targeting B-200 and rocket-300. Overall management of the program was entrusted to the Deputy Chairman of the Council of Ministers, Beria was Soon established and the working body for coordination of works — the Third main Directorate (TGU) of the Council of Ministers of the USSR
In September 1950, the order of the Government the development of the rocket V-300 was entrusted to OKB-301 Lavochkin.
Missiles V-300 was intended to destroy at maximum range 30 km of enemy planes, flying at altitudes of up to 20 — 25 km and at speeds up to 1000 km/h Launch weight of the rocket was limited to 1000 kg, but a preliminary research it was found that this value is clearly insufficient. To effectively engage air targets if you miss 50 — 75 m required compartment of military equipment with a mass of 260 kg. Weight of the onboard equipment was estimated at 170 kg. In the result, other elements of the rocket and fuel levels were 570 kg. Such a missile could not achieve the specified ranges and heights. Therefore, the starting weight of missiles, meets the requirements of the technical specifications was stated OKB-301 to 3900 kg.
At the direction of Beria formed a Commission which included the employees of OKB-301, TSAGI and OKB A. N. Tupolev. Joint efforts managed to find some reserves, and after careful consideration to the design adopted two types of missiles. First, the so — called “Autonomous” single-stage rocket with a launch mass of more than 3.4 tonnes with a flight duration of about 60 s. the Second “composite” rocket, starting with a powder accelerator with the duration of the flight to the target 45 — 50, the mass of the sustainer stage of about 2.2 t, the accelerator is 1.2 T. In the end I chose “stand-alone” missile with a launch mass in the final of 3.58 tons and a length — 11,425 M.
Rocket-300 equipped with a rocket engine, developed by the team of A. M. Isayev On In-300 used a fuel supply system with air pressure accumulator (VAD). 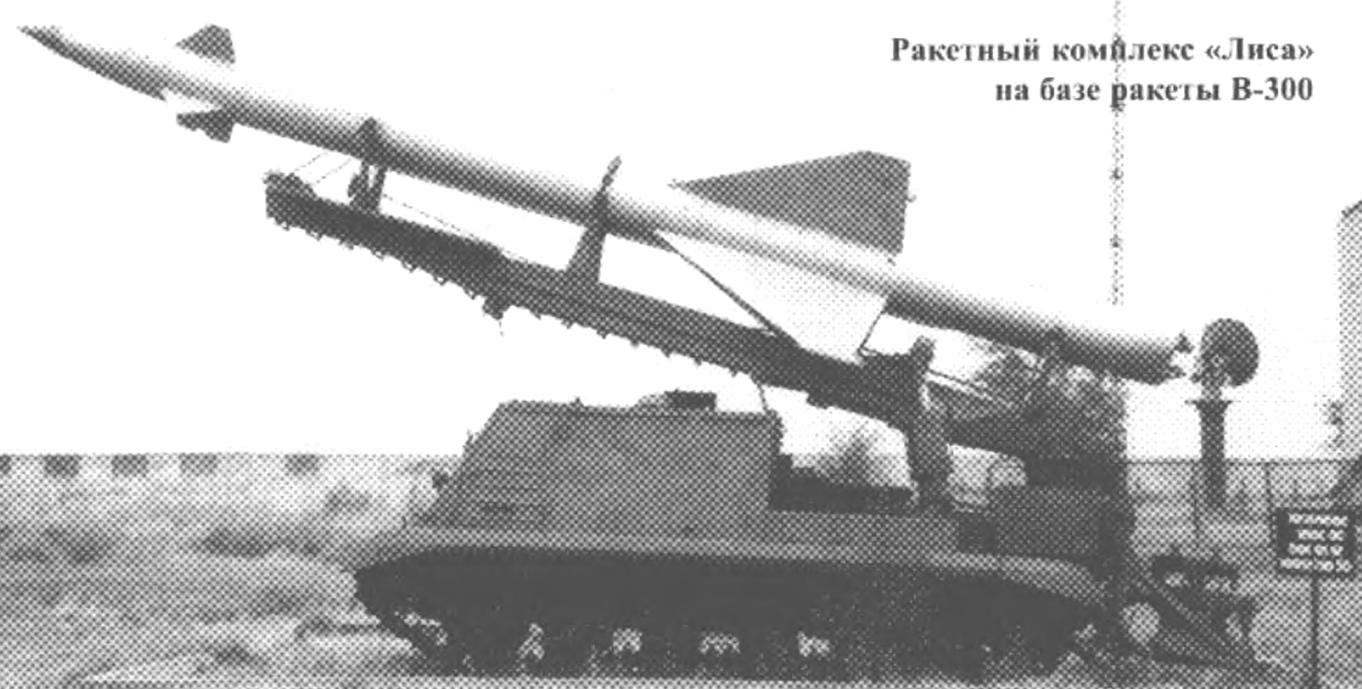 When the scheme of the rocket stayed on the aerodynamic configuration “duck”, which allowed to significantly reduce bending moments on the body of the rocket.
The work was done with such high intensity. according to Lavochkin, “so hard he was in the war years”. Designers are actually transferred to the barracks. Design In-300, which received factory designation “205”, finished in late February, 1951, and March 1 draft project was submitted to TSU, and in may 1951 began ground tests of elements of the missile.
In June 1951, when filling WAD of one of the missiles found the increase in pressure in the fuel tank of the rocket. The Commission found reason: the presence of fistula-in-tube high pressure due to its burn when welded; identified and other deficiencies. The result is the new Director of factory No. 301 was B. N. Lisitsyn, and the first Deputy
C. A. Lavochkina was appointed Dean of the faculty of aircraft MAI P. D. Grushina.
From 25 July to 21 August 1951 at the test site in Kapustin Yar held the first series of flight tests “of the product 205”. The first three missiles were launched on a vertical trajectory without the maneuver, and showed the coincidence of the flight data with the calculated, as well as normal separation from launch pad, the discharge gas rudders, satisfactory stabilization of the rocket gas rudders and the normal operation of the engine. In subsequent launches of vertical launch and declination in the vertical plane for different flight modes it started to fail. Five launches have proved to be successful only one — fifth (counting from the start of flight testing).
However, the first success in test “products 205” became the basis for acceptance in August 1951 of the Government Resolution on the termination of the NII-88 work on the German missiles. 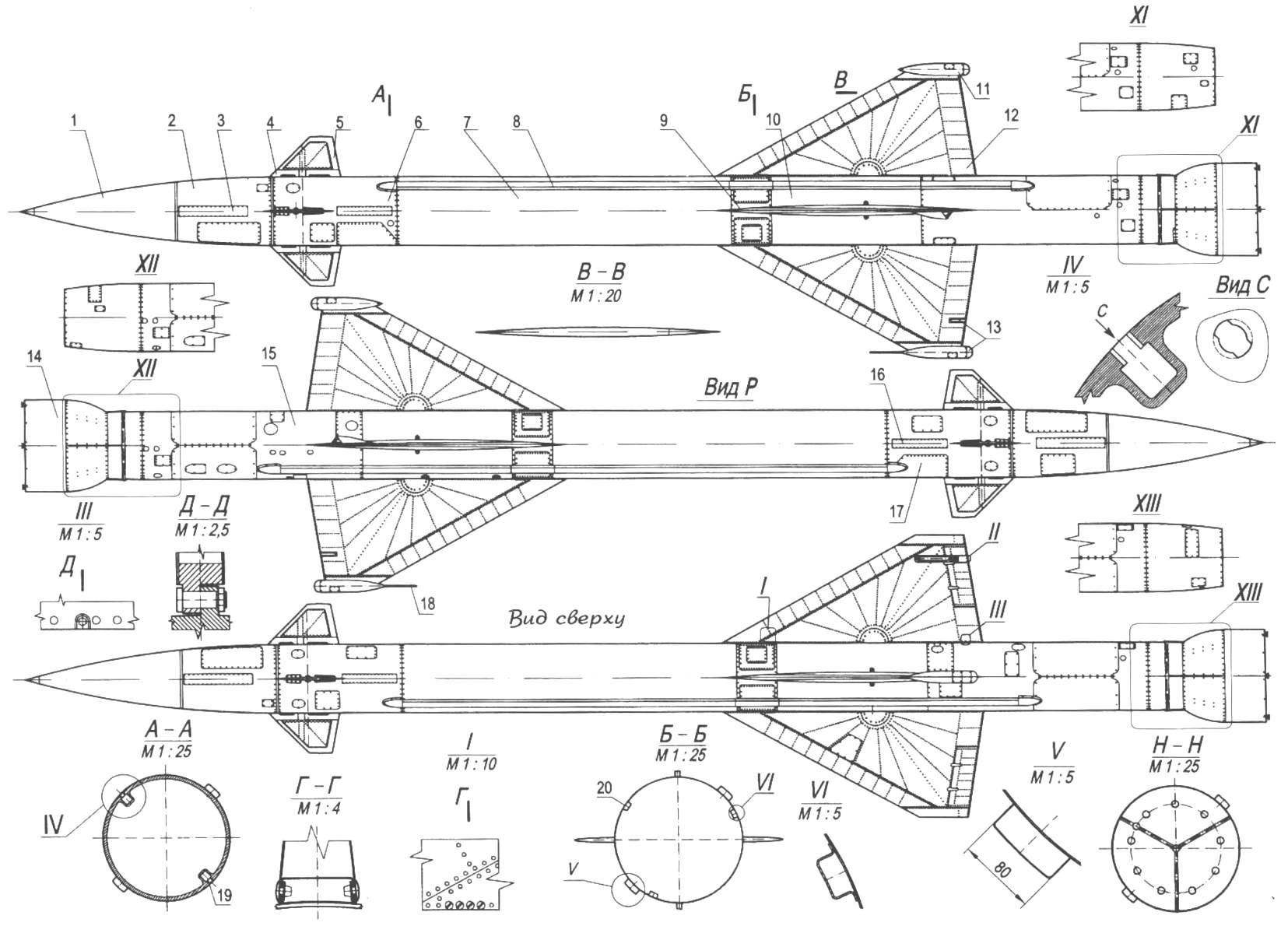 Anti-aircraft guided missile V-300 (“product 205”):
1 — fairing; 2 — Bay front; 3 — receiving antenna of the radio Fuze, 4 — center-steering wheel; 5 — rudder; 6 — the steering compartment; 7 — oxidizer tank; 8 — gargrot; 9 — libacovea compartment; 10 — compartment flammable; 11 — fairing radio antenna; 12 — wing; 13 — antenna radiovision; 14 — spinner farm gas rudders; 15 — the rear compartment (types XI, XII, XIII and XIV without fairing); 16 — transmitting antenna of the radio Fuze; 17 — cover of the warhead; 18 — receiver air pressure; 19 — Jack lifting axle; 20 — Jack brace; 21 — pull Aileron; 22 and 30 — WADE; 23 — radio receiver-fuse, 24 — transmitter radio controlled fuses; 25 — unit of the autopilot; 26 — warhead; 27 — bellows; 28 — oxidant intake; 29 — the pipe feeding oxidizer; 31 — Corbigny tank; 32 battery; 33 — four-chamber liquid propellant rocket engine C09.29; 34 — hook mount farm gas rudders; 35 — tape-tie; 36 — servo; 37 — farm gas rudders; 38 — the fuel intake; 39 — steering machine actuator ailerons; 40 — pyrobolt attachment to the starting table 41 — timing pull gas rudders; 42 — gas drive; 43 — perorates ribbon ties; 44 — housing piratami
From August 25 to September 15, 1951 at the stand of factory No. 301 tested a missile with modified circuitry Board and ground-based cable network, unstable operation which was the cause of the four failed launches. This allowed from 19 September to continue flight testing until October 5, 1951 to make 10 starts.
During the trials held from November 6 to December 16, 1951, launched 12 missiles, including four equipped with radio equipment, and two with radio controlled fuses. All the launches were successful. The first phase of flight testing that confirmed the design flight data “products 205”, ended. However, the design of the rocket is needed in a number of adjustments and improvements.
In the fourth series of launches 17 modified missiles have determined the maneuvering characteristics of the rocket on the big and small heights. Eight missiles in this series with the instrument control in flight was controlled by radio from the ground. The success of this series of launches allowed at the end of April 1952, to make a decision on the preparation of the missiles “205” for mass production in factories No. 82 and No. 464.
In the fifth series of four missiles, equipped with an autopilot, fulfilled all the set programs. Despite the fact that in one of the launches the rocket is destroyed, the data obtained allowed to conclude the good stability and controllability of missiles, and characteristics “of the product 205 is” close to correct.
The purpose of the sixth series of the 10 products with the new autopilot was to determine the maneuvering characteristics of the rocket “205” at start-up for complex spatial trajectories. In this series of successful launches of eight out of ten.
In the seventh of a series of launches simulated capture and automatic tracking missiles, “205” station B-200. This time in three of the five launches of flight task performed. At the end of 1952 held its eighth series of launches for testing the stability and controllability of the missile in the closed circuit of station B-200.
In the last two series were used rockets manufactured at production plants No. 82 and No. 464. Overall, of the 22 launches of the last two series, the rockets fully complied with the specified program in ten.
In early 1953, in accordance with the Resolution of Council of Ministers mass production anti-aircraft missiles “205” developed in factories № 41, № 82 and № 464 Only until 1954, manufactured 2313 missiles.
“205” was finished and after his run in the series In 1952, to ensure reliable starting of rocket engine at low temperatures, set the heater starting oxidant. Significantly improved the air rudders and the ailerons. To reduce the influence of disturbing moments and ensure the best stabilization In-300 its equipped with ailerons larger toporovskaya the initial part of the flight between the body of the rocket and air rudders introduced the center section.
In 1953, continued to test missiles, “205” closed-loop control of the station B-200.
In the period from 26 April to 18 may 1953, with the aim of determining the efficiency of destruction of aircraft missile, “205”, carried out the launches of the aircraft targets, the Tu-4. Only five aircraft targets launched 12 missiles Hit all Tu-4 — four was destroyed in the air, one with heavy damage and fell in the landfill area. Thus in two cases the target was struck with one missile, in two cases, two rockets and one with three. 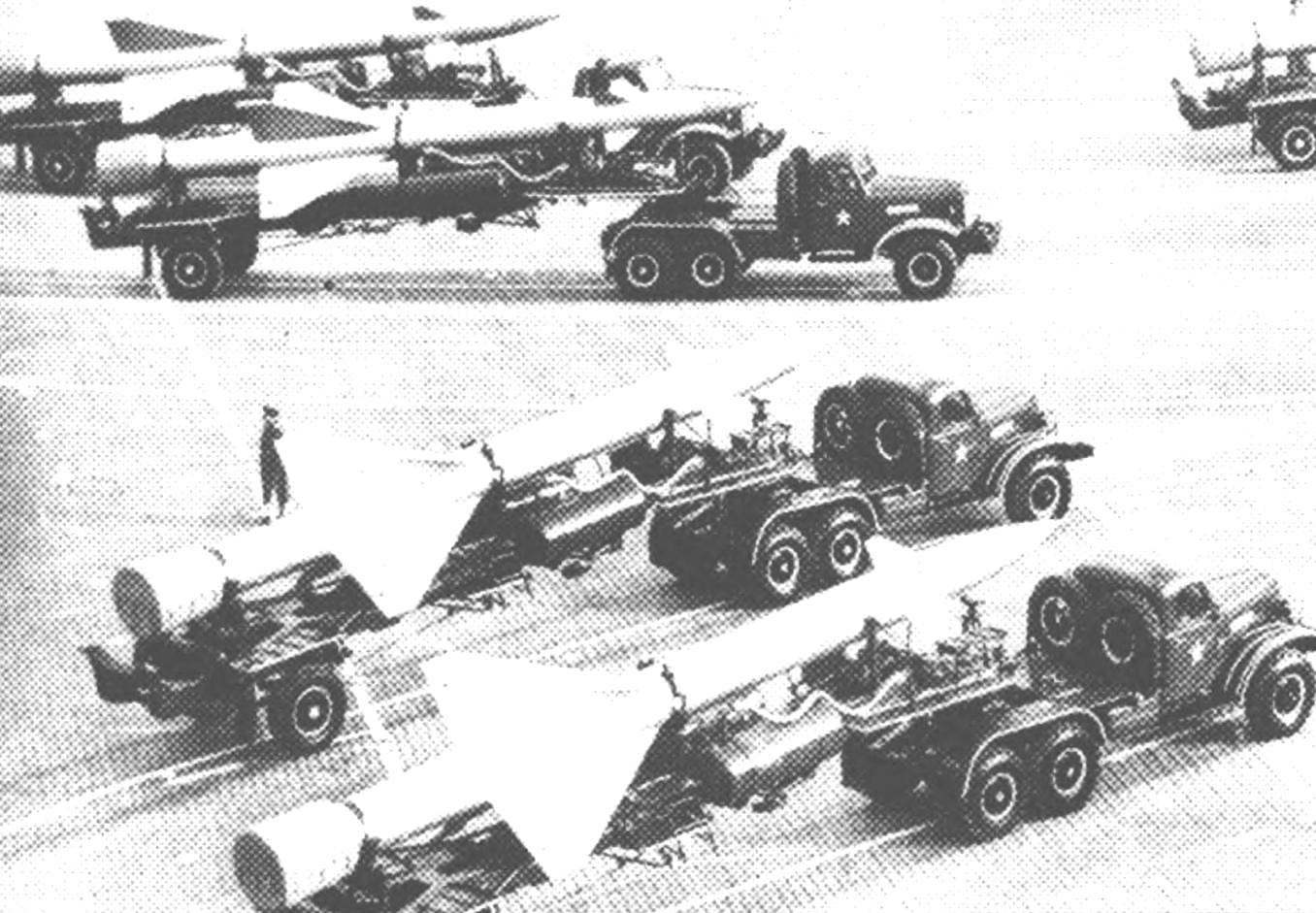 Transportno-charging machines of anti-aircraft missile system s-25 missile V-300
In 1953, after the arrest of Beria, and then to his son, in the manual of KB-1 has been a significant reshuffle. The system was renamed the s-25, for its adoption formed a Commission led by Marshal of artillery N. D.Yakovlev, who demanded the repetition of the tests.
In the fall of 1953 tested to determine the effectiveness of the s-25 when firing at aircraft targets, and validate the possibility of simultaneous launch of multiple missiles on multiple aircraft targets, the Tu-4. Of the four planes-targets Il-28 three was hit by two missiles each and one with one missile. On the scoring stage launches two missiles were made simultaneously on two planes-targets Tu-4, the interval between the achievement of the target missile did not exceed one second. Of the four Tu-4 one is struck by the first rocket, the second was blown up already burning the target, three other Tu-4, respectively, have destroyed one, two and three missiles.
1954, which became a turning point for the air defense forces, was forced to speed up the commissioning of the s-25. This contributed to the incident that occurred on 29 April when three reconnaissance aircraft RB-45 made long flights deep into Soviet territory. In the summer-25 filed on state tests, in which from 25 June to 1 April 1955 made 69 launches of missiles, including 20 targets simultaneously. Certificate of completion of state tests was signed in two versions, the Main difference was that in the first talked about the adoption of C-25 on the arms, and in the second it was proposed to Refine the comments of the Commission and then to adopt.
The result of consideration of those options in the CPSU became neutral solution— the system was accepted into service with performance in trial operation. With this formulation in may 1955 C-25 adopted the air defense forces. Around Moscow had deployed a Separate army special forces, which included 56 anti-aircraft missile regiments with stations B-200 and positions missiles V-300.
For the creation of the first Soviet serial Suhr S. A. Lavochkin in 1956, the second time was awarded the title of Hero of Socialist Labor.
V. KOROVIN, A. FOMICHEV