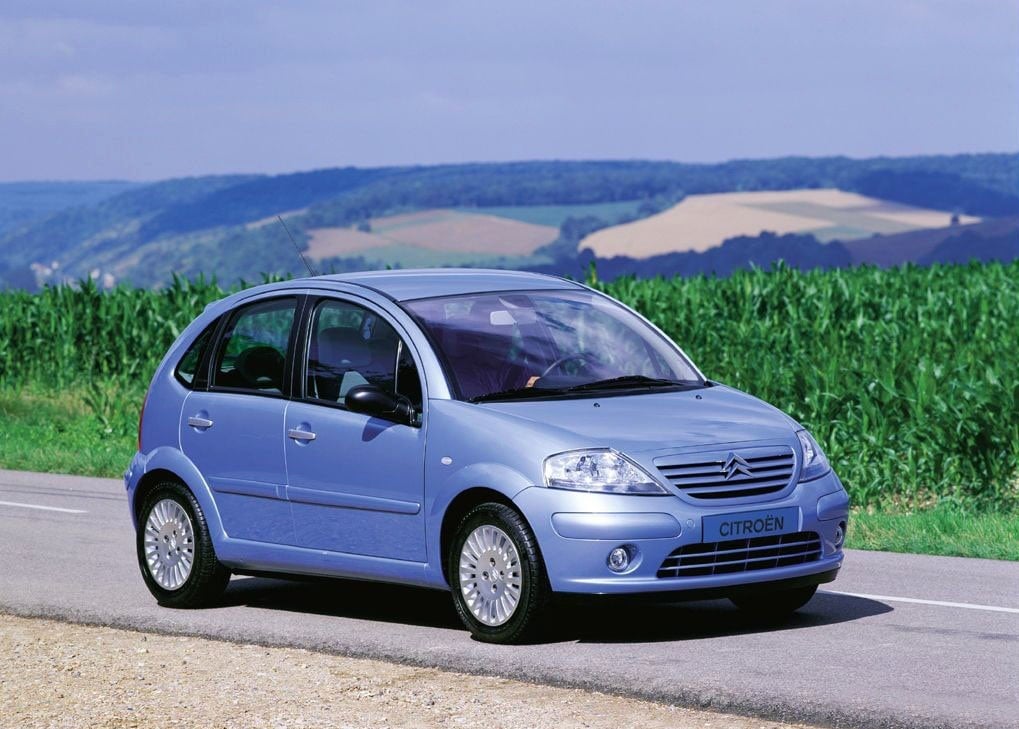 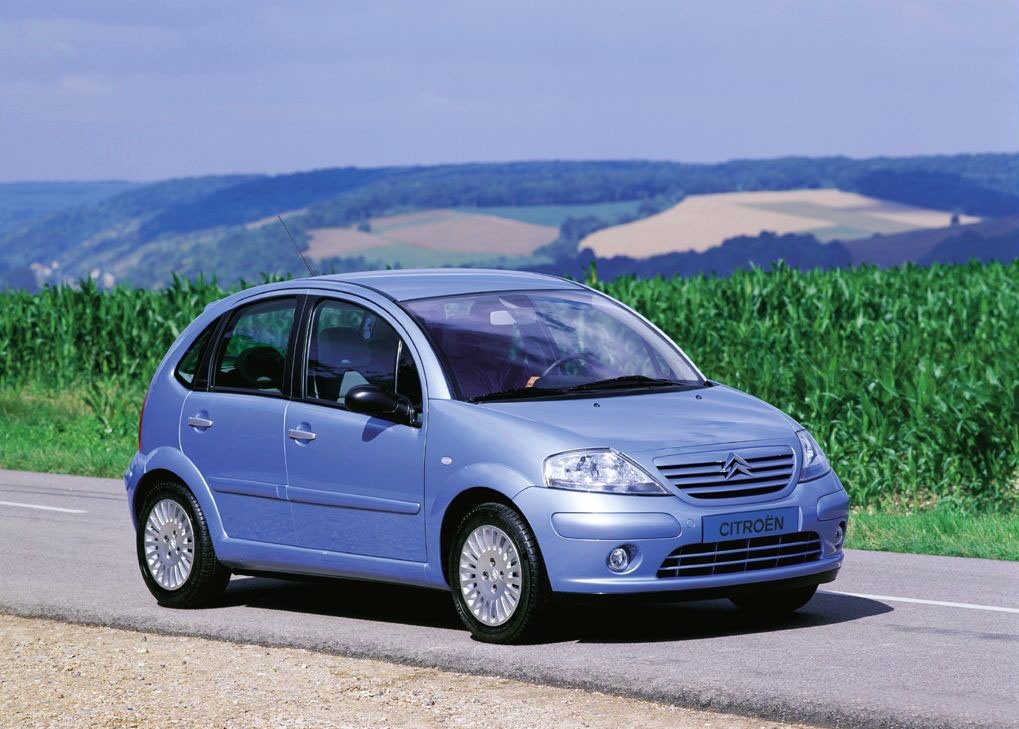 Ask car enthusiasts about which meaning is embedded in “tree” — the emblem of the famous French firm Citroen and you will get a variety of answers. And, maybe one out of ten say that the sign shows a pair of teeth of the herringbone gear, the production of which had been established by company founder andré citroën.
The car production thirty years A. Citroen started in 1908, becoming technical Director of the company Mors. The ability and resourcefulness of Citroen allowed the company in the short term to double the output.
The second world war set the A. Citroen the objectives from the automotive industry: he had to master the production of artillery shells. However, in this case A. Citroen introduced many new things, applying manufacturing and Assembly of the shells, the principles of mass production.
The formation of the company Citroen took place in 1919, when A. Citroen produced their first car, which entered the history of a company called MODEL A(10CV). However, true recognition the firm has received, starting in 1922 in mass production which soon became famous compact car CITROEN C(5CV) with an engine displacement of only 0,856 L.
Three years later A. Citroen once again surprised the automotive world by creating the first in France car with all-metal body, dubbed the CITROËN B10. The model is like the French, and it was followed by the modification of this machine with the indices of B12 and B14. In 1928, the firm tried to win over wealthy customers, releasing a series of Executive CITROEN C6 with 6-cylinder engines working volume of 2.44 l and 2.65 L.
But the most significant contribution to the science of that period was the establishment of the powertrain, called Traction Avan — front-wheel drive. This transmission was equipped with CITROEN 7A — the world’s first front wheel drive mass middle class car, manufactured by the company in 1934. The importance of this machine for the automotive world had been so high that it makes sense to talk more about it. 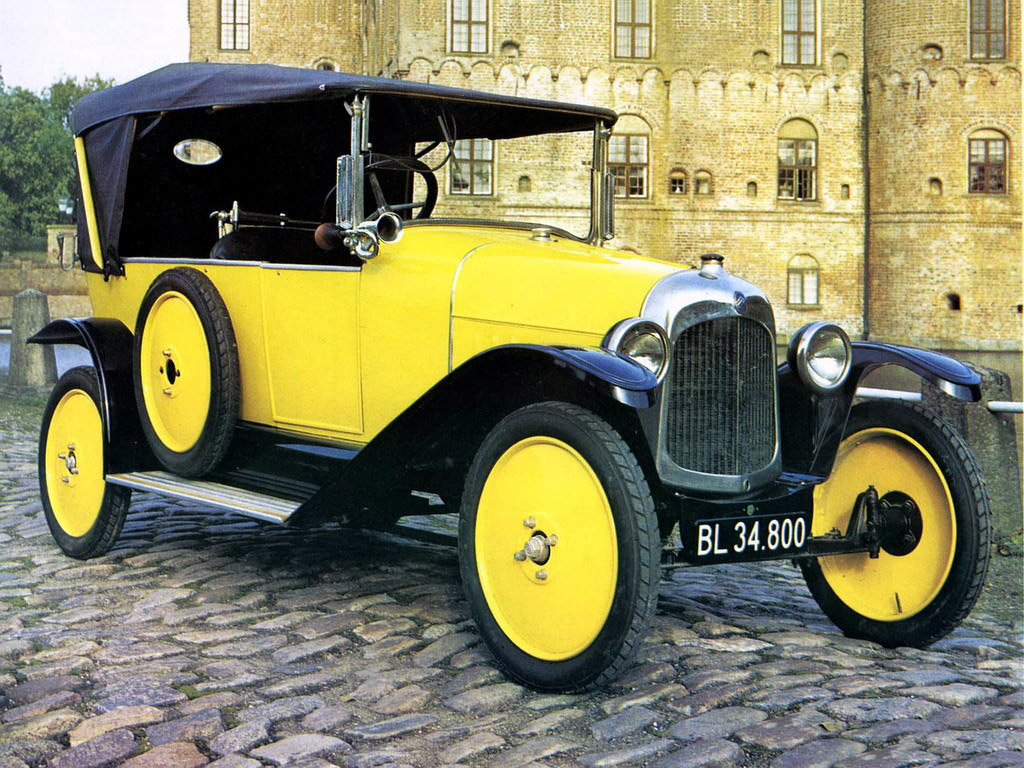 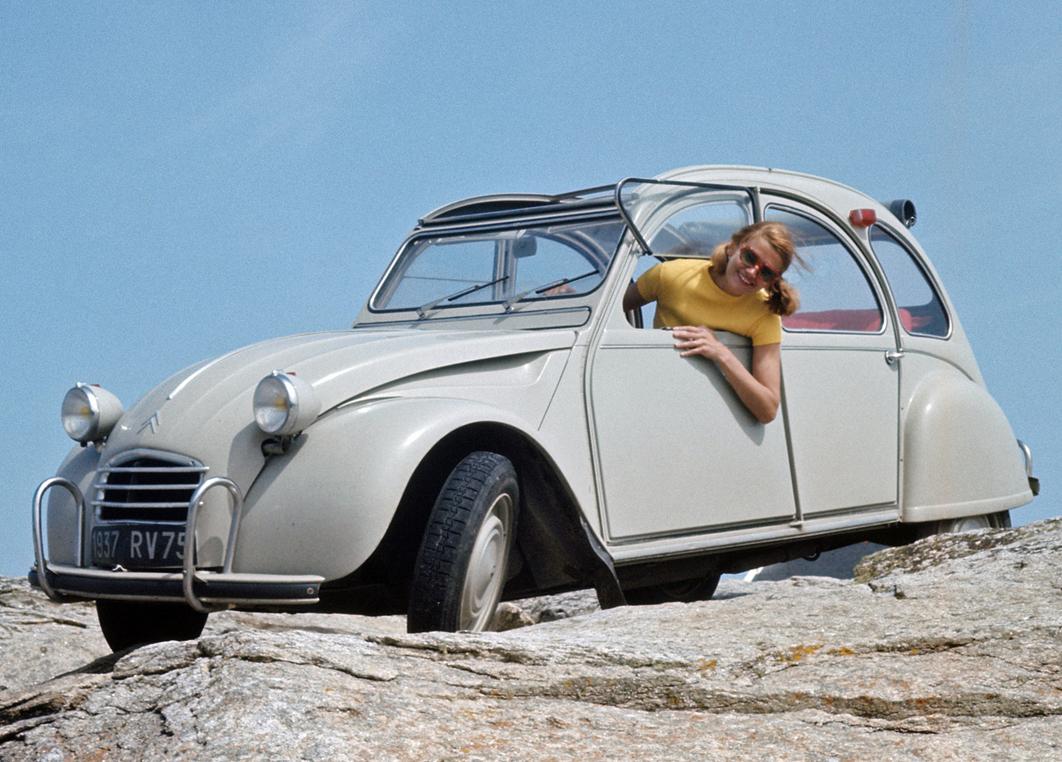 CITROEN 2CV — super-massive car for 42 years there were about 5.5 million copies (1949)
In addition to front-wheel drive, which is currently equipped with a significant portion produced in the world of cars, the CITROEN 7A become a carrier and other advanced design principles: he was an all-metal bearing body, independent suspension all wheels, hydraulic brakes, 4-cylinder overhead valve engine working volume of 1.3 l and a synchronized gearbox.
Series Traction Avant has been repeatedly modernized — produced a model with new engines, body, suspension. The car was produced until 1957. In just 22 years was released about 760 thousand cars, the ancestor of which was the famous CITROEN 7A. However, A. Citroen to see the triumph of his offspring failed, and in 1936 head of the firm died.
And another iconic car company, which will lead us to the main character of this story, is a compact car the CITROEN 2CV. The French called it simply “de shvo”, meaning “two horses”, referring to two horsepower. For the first time this machine appeared at the Paris motor show of 1948, and aesthetes from autostructure unanimously predicted the unsightly front wheel drive car with two-cylinder “vent” working volume 0.375 l the fate of a minor episode in the production program of the company
Development of this vehicle began in 1936, when the company President Pierre Boulanger ordered to build very simple and cheap means of transport, literally, “four wheels under an umbrella”. The first instance of “de shvo” almost meticulously reproduced the order of the President of the company: it was the simplest style of metal roof, the hood with fluted steel pulley with a trigger cord on the crankshaft of the engine water cooling instead of a starter and a single headlight.
Before 1939 there were about 250 such machines, but the outbreak of the Second world war forced the company to cease production of minicars. However, even in the years of German occupation improvement “de shvo” continued. This helped in 1948 to introduce visitors to the Paris motor show largely updated the car with the air-cooled engine and the original suspension in which the right and left installed for one longitudinally extending spring for suspension arms front and rear wheels.
Much to the surprise of the aforementioned aesthetes from autostructure, buyers literally flooded the firm with orders for the new car. Runabout “de shvo” was for the French what the Germans were “beetle” of the company Volkswagen and the British MINI baby firm Morris; it has been repeatedly modernized and is available in 15 (!) countries. In France, the car was produced until 1990 for 42 years the total release of the “de shvo” amounted to 5.5 million copies. As claimed, the upgraded CITROEN 2CV and in this century off the Assembly line in one of the States of South America. 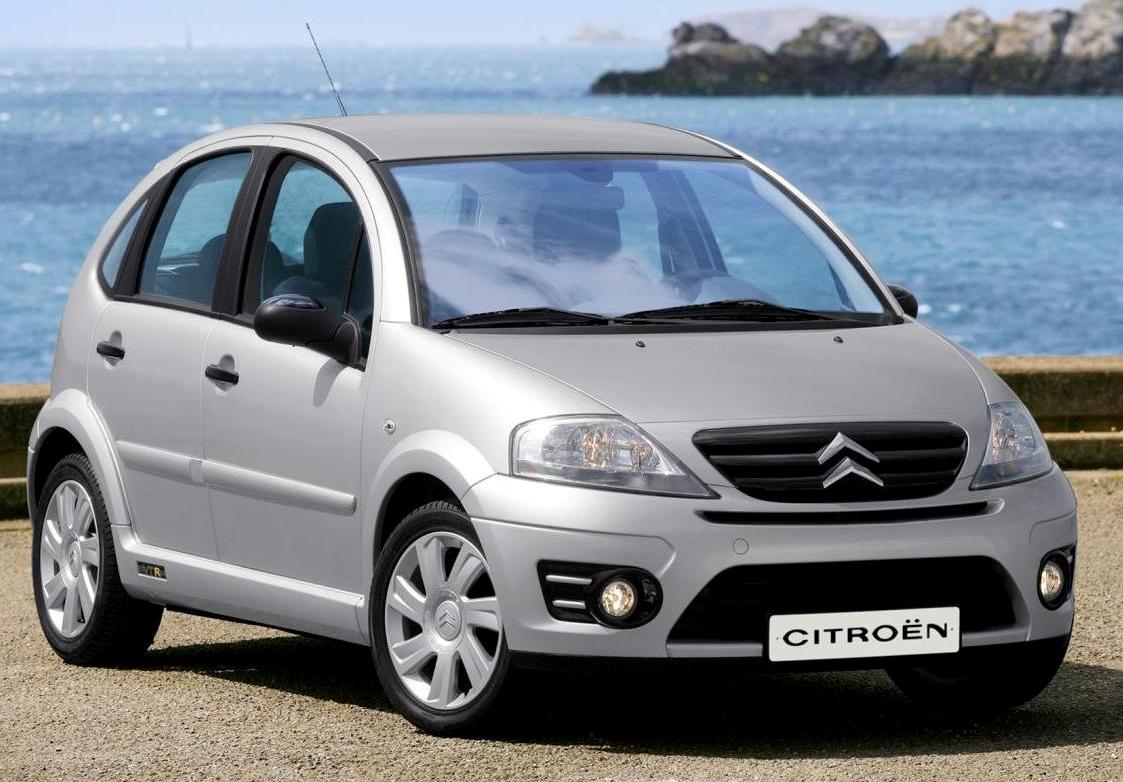 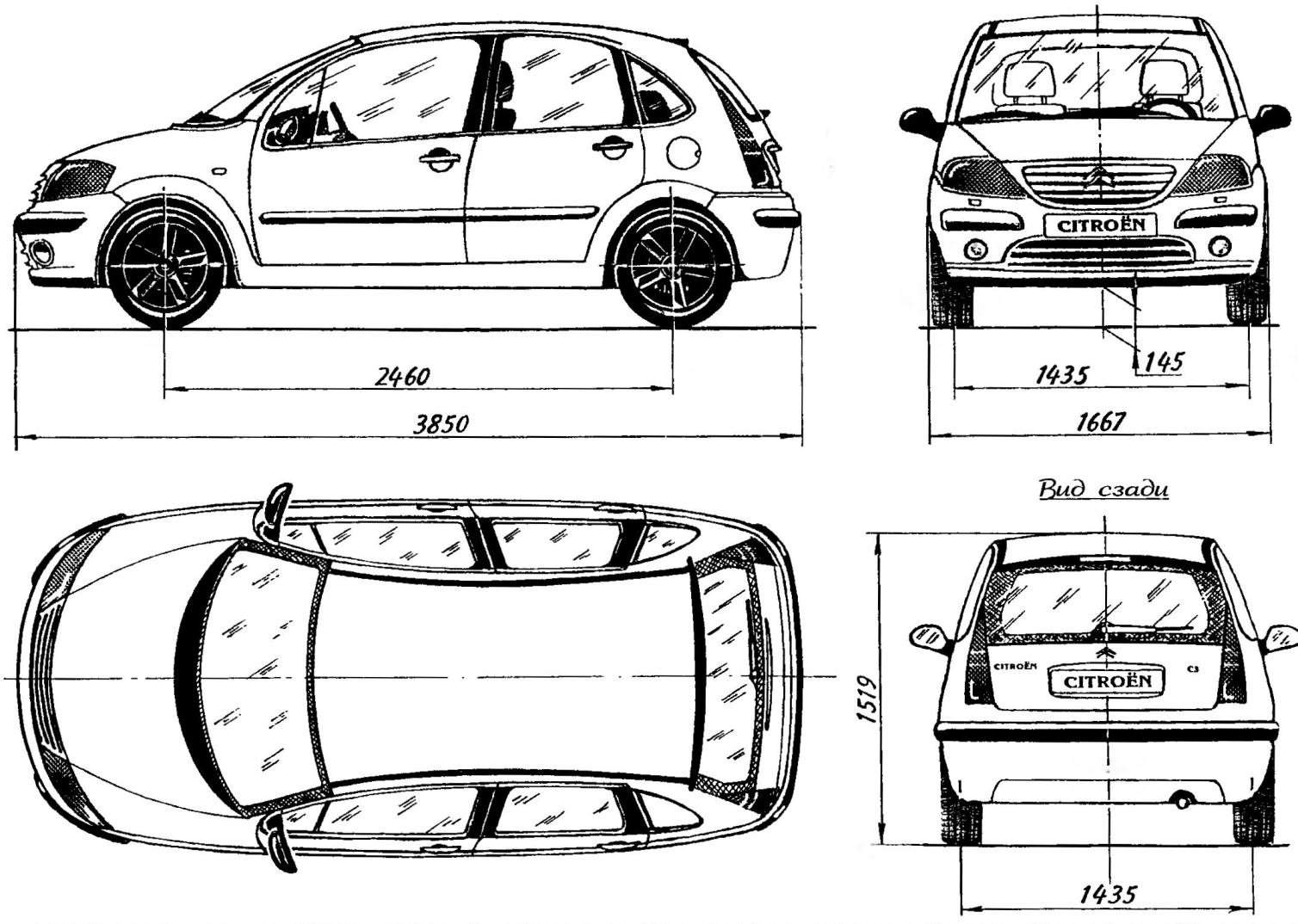 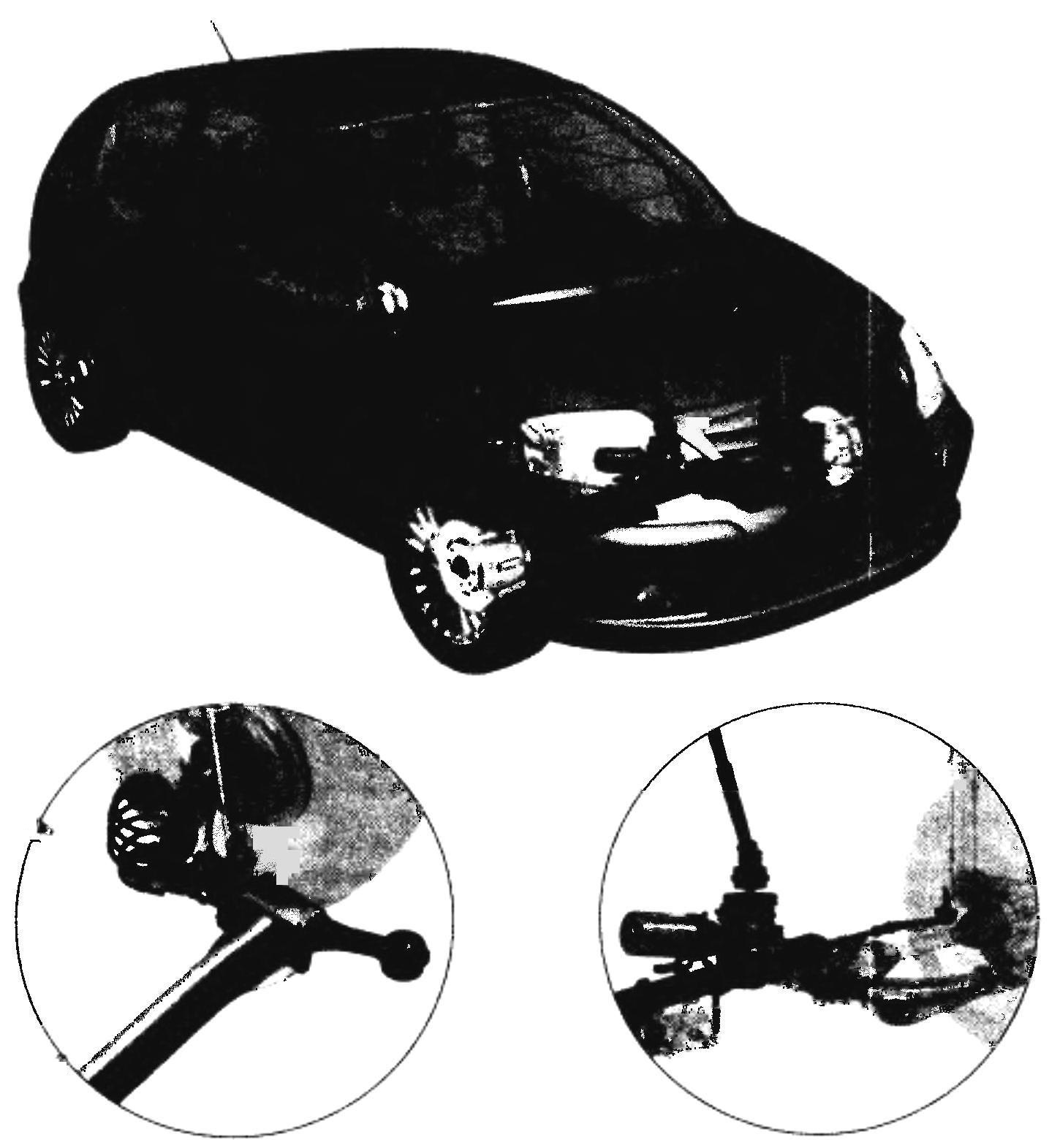 CITROEN C3 suspension. Lower right independent spring suspension type McPherson; left — semi-spring rear suspension
The Citroen firm had to release a lot of great cars, among which was the legendary CITROEN DC19 adjustable suspension, and an Executive CITROEN DS21, created specially for the President of France and CITROEN GS estate… Well, let’s talk about these machines until better times, and refer to the current nostalgic trends in automotive engineering, which led to the emergence of a new VW BEETLE, the modern MINI is BMW and has come, finally, to the company Citroen.
In 2002 in the town of Chantilly near Paris hosted the European presentation of the new compact city car CITROEN C3. Journalists immediately saw the cute little family resemblance with the old “de shvo”, although C3 is a car of a higher class than 2CV (it can be compared with the PEUGEOT 206, RENAULT CLIO and VOLKSWAGEN POLO In the international class), and this is no accident. All the modern remakes of the iconic cars of yesteryear are in the automotive hierarchy, a step or two higher and, consequently, more powerful and much more expensive.
So, CITROEN C3. This car is a front-wheel drive five-seater hatchback with a semi-dependent rear suspension with springs and alloy trailing arms and connected with them by bolts stamped crossmember and front classic suspension McPherson. Interestingly, the little C3 is equipped with wheels measuring 14 or 15 inches, depending on engine type.
The company produces a C3 with a wide range of powertrains, including gasoline engines working volume of 1.6 liters (110 HP), 1.4 l (75 HP) and a 1.4 turbo diesel HDI (70 HP). In addition, the vehicle can be equipped with petrol 1,1-liter engine and a 1.4-litre 16-valve turbodiesel with variable geometry turbo and intercooler. And, of course, the machine is equipped with mechanical 4 or 5-speed manual transmission and also automatic transmission.
It should be noted that this compact city car in terms of equipment surpasses many of his “classmates”: he’s got four airbags, electric power steering, anti-lock brakes, electronic brake force distributor EBD, extreme zatormazhivat coupled with automatic turn on the alarm when a sharp slowdown and finally air conditioning.
Technical characteristics of the car CITROEN C3

For more “cool” versions are mounted side-curtain airbags, rain sensor, climate control, and a custom, glass roof, part of which can be moved electrically. In the center console is a CD player for six CDs.
CITROEN C3 (as well as several other modern car company) has a so-called multiplex wiring, which provides a considerable gain in mass and greatly facilitates its installation in terms of line production. In addition, significantly expands the capabilities of the onboard equipment, in particular, the system of climate control, which is able, depending on the state of the environment to adjust the parameters supplied to the cabin air flow.
For its size the CITROEN C3 is slightly different from town cars-“classmates”, but the dome-the roof had slightly higher (1519 mm), which allows you to comfortably sit in the front seat, even the people are quite tall. Yes, and back seat passengers to sit comfortably. By the way, the rear seat can be partially folded to make room for bulky cargo. It should also be noted that the capacity of the cargo compartment, component 305/1310 l, CITROEN WTS — the leader in class.
Ergonomics of driver’s seat from the NW on top. Excellent visibility forward and to the side due to the windshield shape and stands a good, comfortable fit, adjustable height and lumbar podpora seat comfortable shape with side support, steering column with adjustable tilt and departure.
The front panel is two tone, molded of hard plastic under the arch is spherical LCD display with basic instrumentation. At its center is a digital speedometer above it — the arc of the tachometer, the segments on the right and left pointers of level of fuel in the tank and coolant temperature.
Serial production of the CITROEN DS was launched in 2002 and until the end of the year it was released 160 thousand cars. The planned volume of output — about 330 thousand cars a year. Supply C3 in Russia will begin in may 2003, we will get cars with gasoline engines working volume of 1,4 and 1,6 l
The estimated cost of the version with 1.4-liter engine (depending on configuration) $11 000-12 000 is slightly higher than the price of the machine-“classmates”. Therefore, the Russian buyer is not burdened with nostalgic memories of little “de shvo” is likely to choose similar in configuration and equipping of the PEUGEOT 206, which Moscow dealers offer buyers for $ 9000 or FABIA 1.0 BASIC — for $ 8500.
I. EVSTRATOV