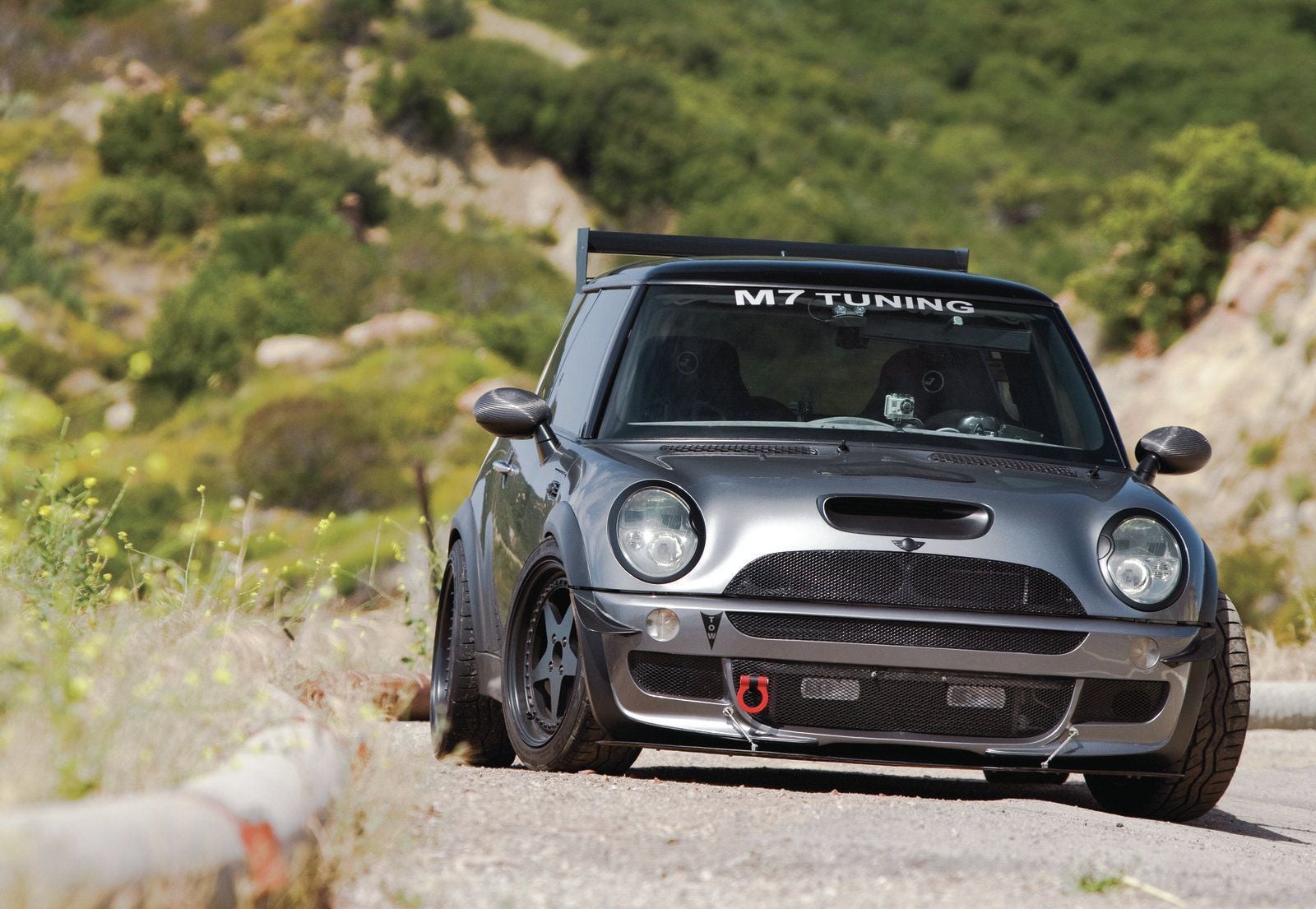 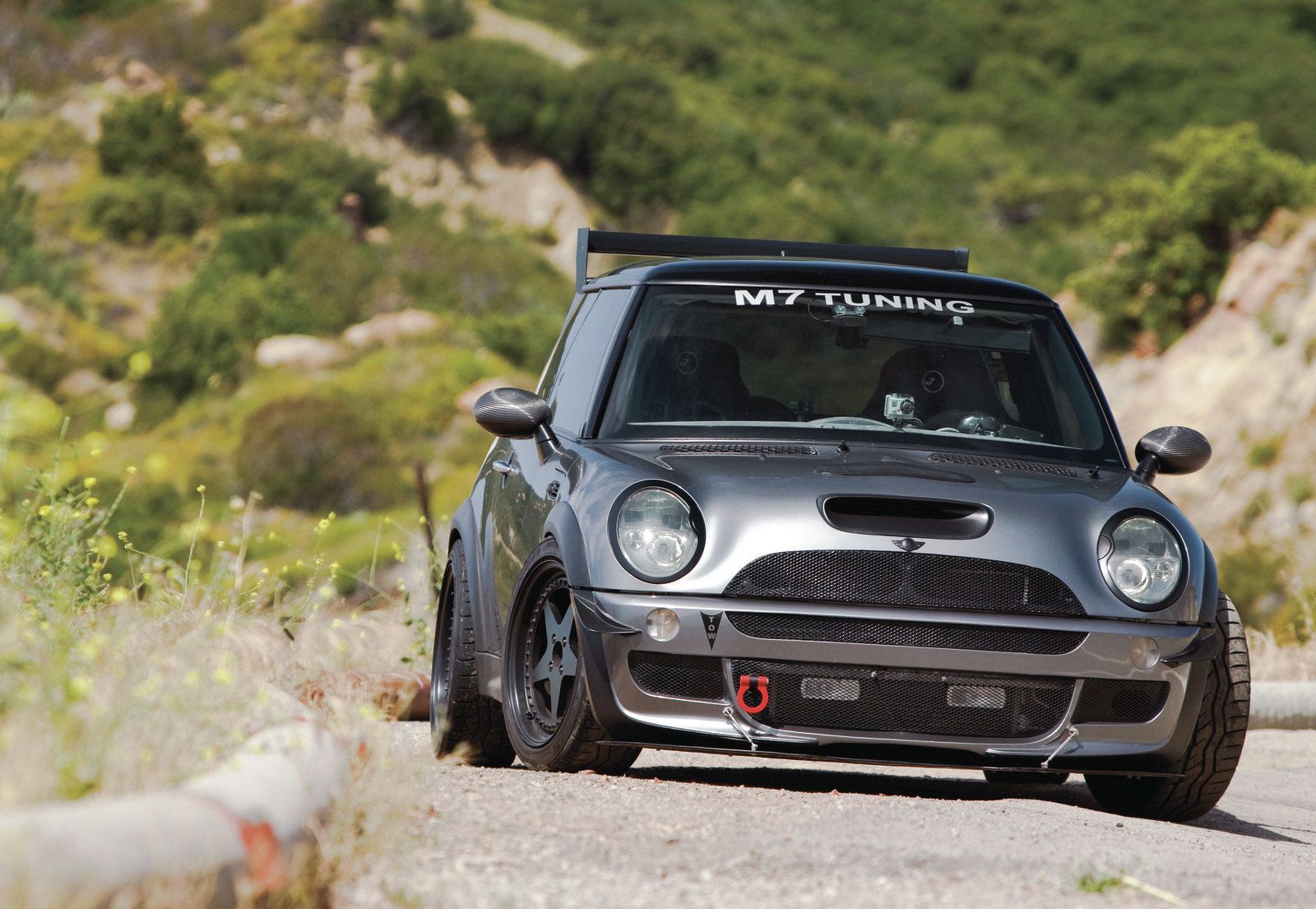 FRONT-WHEEL DRIVE MINI COOPER S 2002 ISSUE. Until now, the main trend of the world design was the desire to create a car that did not create one. The designers were looking for new shapes, the designers designed new components and assemblies, engineers have developed advanced technological processes… In the end, the car dealers were flooded with futuristic concept cars, which, according to the plans of producers in a few years was to fill the city streets. But more recently, designers have adopted another principle of creating new cars, which on the basis of the stage model of yesteryear.

One of the first embarked on this path, the concern Volkswagen, which launched in the serial production of the NEW BEETLE created “based on” the legendary pre-war “beetle” Ferdinand Porsche. It was followed by the separation of the company BMW in the British Oxford who created the MINI COOPER is modeled on the famous English machine Alec issigonis ‘ MINI, launched in production in the late fifties of the last century. Now the firm Citroën develops the production of a modern car the CITROËN C3 using the key style decisions the most popular French car of the fifties CITROËN 2CV the French-two was called “de shvo” — two horses.
In today’s article we want to acquaint readers with one of these cars — three-door hatchback MINI COOPER. Those who are interested in detailed story about the legendary predecessor of this car, you can refer to our not too long ago the publication (“modelist-Konstruktor” No. 6 in 2000), but others we will introduce only the main milestones of the creation of the legendary MINI.
The future Creator of the MINI Alec Issigonis came to British car Morris Motor company in 1936. In 1952, after its merger with Austin, the firm became known as the British Motor Corporation (BMC). In the late fifties her head Leonard Lord instructed Issigonis to create a car that is no longer than ten feet, capable of accommodating four people and a small Luggage. To implement this plan. Issigonis had to place wheels at the corners of the rectangle designating the planned projection of the machine, and between the front wheels, to place a transversely mounted engine, made integral with the transmission. No gimbal, no reducer of the rear bridge with a MINI in the automotive world is firmly among the front-wheel drive.
In 1958, the prototype was ready, and so he answered the underlying technical task that the leadership of the company decided during the year to run a machine in the series. In the spring of 1959, went on sale two versions of the MINI: the AUSTIN SEVEN and MORRIS MINIMINOR. The price of the other was less than $ 800. Machine enjoyed great popularity all over the world — their production was 200 thousand copies a year for the next fifteen years. In 1986 the factory in Longbridge came five millionth car. 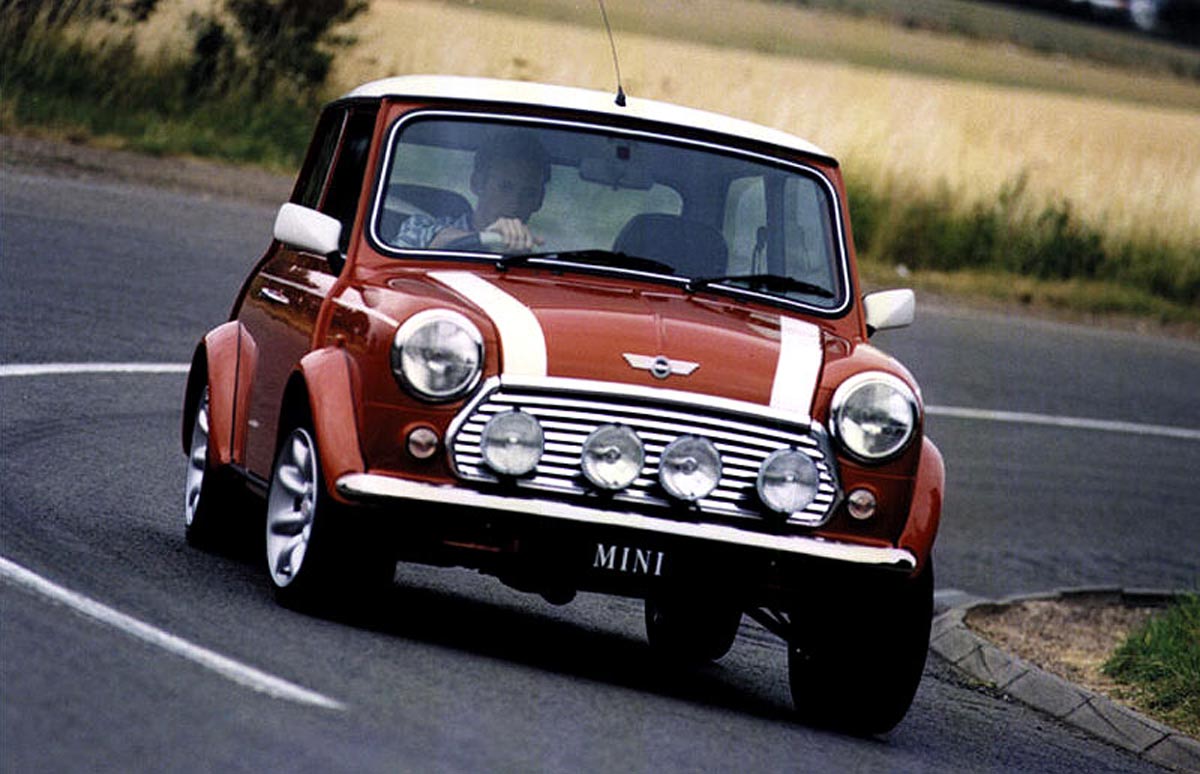 MINI COOPER S release 1970 — front-wheel drive car of the British company Morris
In the same year, the Navy was renamed as the Rover Group and in 1994, the control of the company has received the BMW. In 1996, the management of this company said that in the near future, the automotive market will have a brand-new car with a familiar world called MINI.
And he appeared. First, in versions of MINI ONE and MINI COOPER, and then was released extreme variant of the MINI COOPER S. the engine Power at the first— 90 HP, the second— 115 HP, but the car with the letter S in the title set 163-horsepower compressor motor, enabling the machine to reach speeds up to 218 km/h.
In fact, all three versions are almost twins, and get to know this lineup is best for the most “advanced” variant— the MINI COOPERS.
Layout scheme of the new MINI is almost the same as the issigonis ‘ cars: four wheels at the corners of the rectangle, between the front wheels, hid a transversely mounted engine and, of course, front-wheel drive. But everything else…
The engine on the MINI COOPER S — type, Pentagon (BMW-Chrysler): forced, four-cylinder, with a cast iron block. Compression ratio of 8.3 (MINI COOPER and MINI ONE are equipped with the same motors with increased to 10.6 units of compression). Crankshaft, pistons, connecting rods, valves and liners are reinforced, the pistons are cooled with oil from special nozzles. The blower is a rotary compressor Roots, has the drive from the impeller, rotated by the exhaust gases and from the engine through the V-ribbed belt — along with generator and air conditioning kompresora.
Such a drive scheme of the compressor eliminates the delay in the response of the motor to movement of the accelerator pedal.
Of the inlet air passes first into the air filter and then into the compressor, then the pressure of 0.8 bar it is served in the radiator intercooler (air cooler) and then into the cylinders. A coolant pump located under intake manifold and is driven from the compressor through the lower gear. A six-speed gearbox, developed by the German firm Getrag, a traditional supplier of boxes for vehicles BMW series M to fit the power unit in the engine compartment of the car, transmission had to make a three-shaft. Less powerful versions MINI installed five units of English manufacture or CVT.
To place under the bonnet Assembly supercharged with intercooler, battery had to install in the trunk. By the way, this measure has improved the weight distribution. Well, a spare MINI is not provided — on the machine used safe tires.
Front suspension McPherson-type independent with stabilizer. Rear suspension spring, multi-link, and version of the COOPER S can be equipped with multiple suspension options. In particular, for lovers of active style of driving designed Sports suspension PLUS with stiffer springs, dampers and stabilizers.
Front and rear car brake disk, and front — ventilated. The braking system includes every conceivable device to improve its effectiveness. ABS nowadays, but in addition the machine has the dynamic stabilization of DSC, electronic brake force distribution EBD, traction control with traction control AST+T and also with the SVS device (Cornering Brake Control). The latter is particularly necessary when braking in a curve when the car as though squats on the outer front wheel: SAF applies maximum braking force, it is the most loaded wheel, and working brake cylinders of the other wheels, the pressure growing slightly smoother, which ultimately allows to avoid drift. 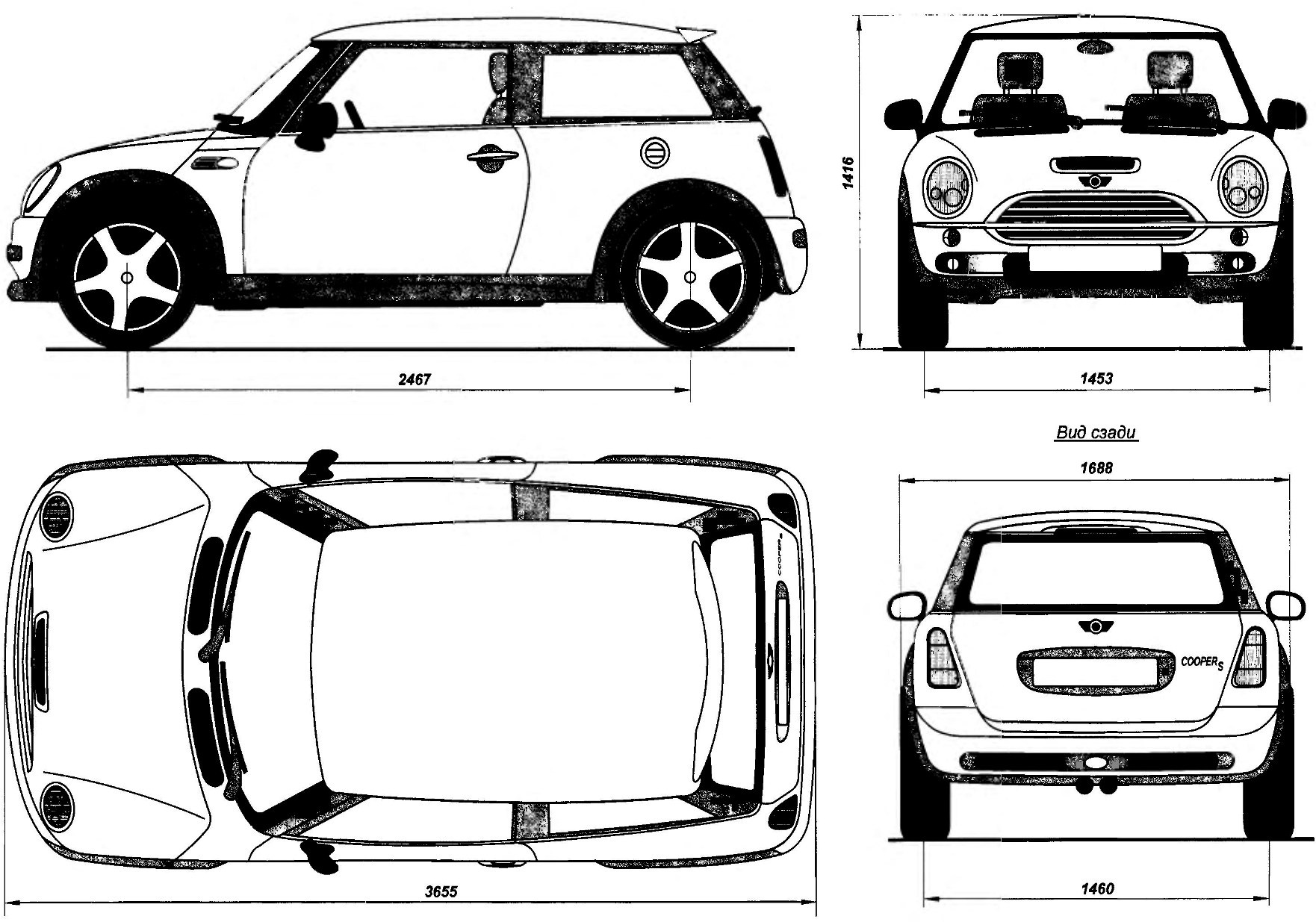 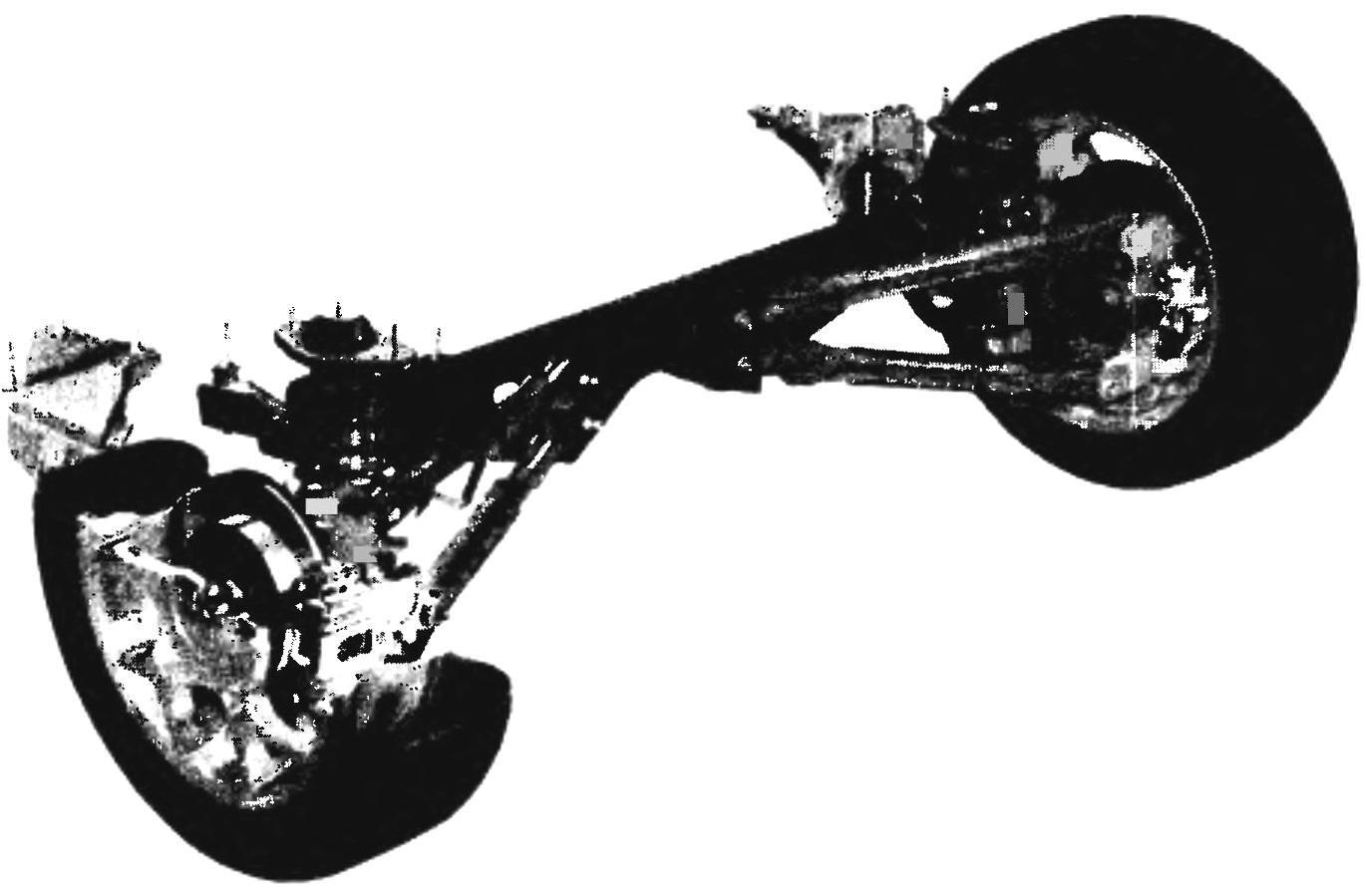 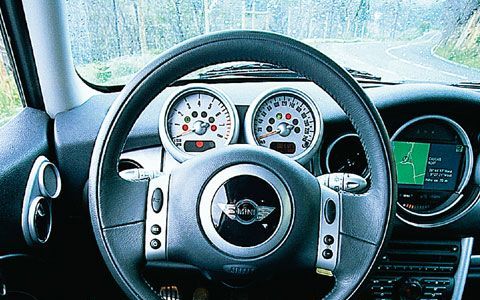 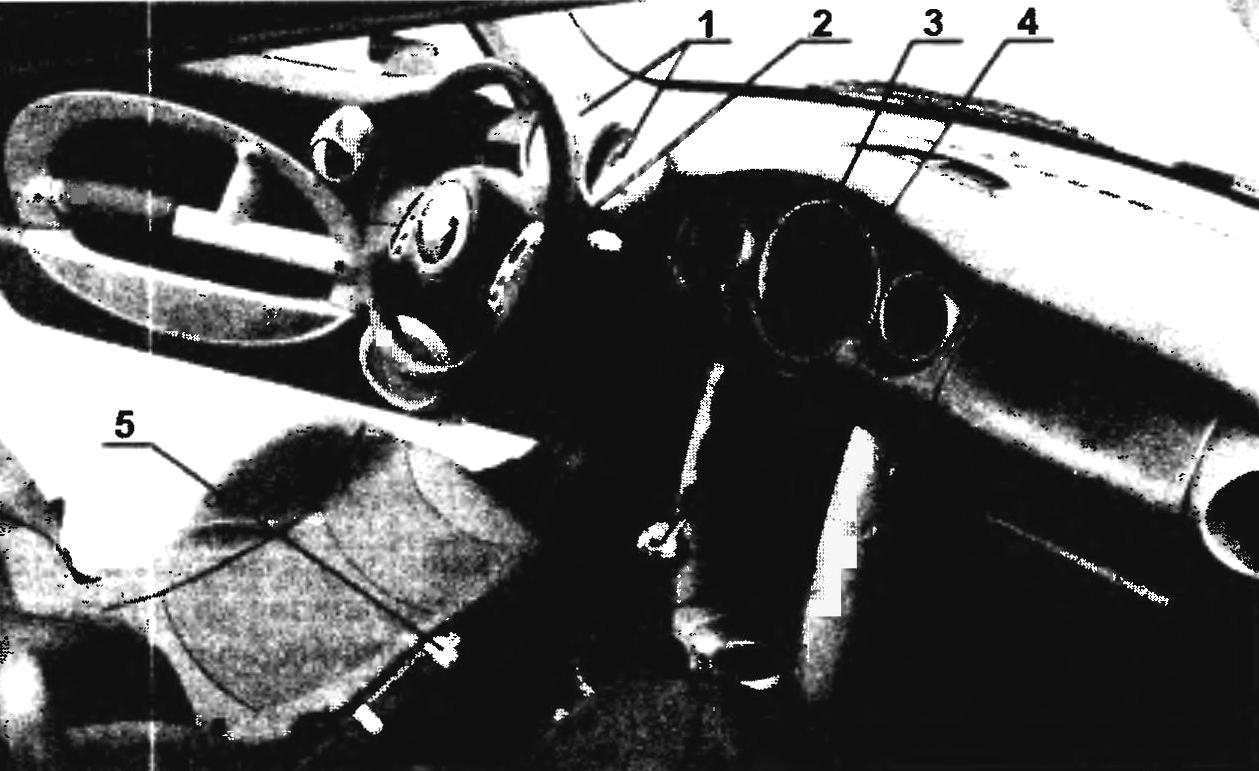 The driver:
1 — unit devices; 2 — steering wheel with air bag; 3 — Navigator screen; 4 — arm transmission; 5 — handbrake handle
Steering rack and pinion, with electro-hydraulic power — full stroke the steering wheel is only two and a half turns. This allows the machine responsive to the slightest movement of the steering wheel and the driver to better predict its behavior. Everything, the car had 16-inch wheels with a special safety tyres size 195/55 who are not afraid of punctures in the fully run-flat tire can travel up to 150 km at a speed of 80 km/h.
Important advantage of the MINI is very rigid in torsion body. Accordingly, the passenger capsule machine has high strength — it is three times more than all known compact cars. And, of course, MINI — complete set of devices for passive and active safety: four airbags (two front and two side), as well as fabric curtain protecting passengers from glass shards.
Interior unusual for a car of this class. Right before the eyes of the driver on the steering column — tachometer with indicator lights in a circle. To the left of it, under a graceful canopy of a large speedometer with indicators similarly spaced.
In versions with navigation system speedometer with smaller diameter is placed on the steering column. White dials and plastic inserts on the front panel, simulating rough machined aluminium give the interior a sporty look.
Under the speedometer — block control ICE radio with CD-changer for six discs and six speakers.
Below is the control unit climate control unit, and under it is a line of toggle switches with which you can turn on the various systems of the car to open or close the Windows, etc.
I must say that this location of the switches on the car are almost never met, but awlasa standard for aircraft and helicopters.
On the inner sides of the doors is a powerful and easy arm, which can serve as armrests. However, drivers sometimes complain about a lack of visibility — too small as side mirrors and interior mirror
Despite its small size, the MINI car is capable of carrying loads of up to 430 kg: boot capacity is 150 liters (with the rear seats folded— 670).
Technical characteristics of the car MINI

So, producing luxury cars with a retro look massive machines are becoming a more frequent phenomenon in the global automotive industry.
The roots of this phenomenon must be sought, apparently, in subtle and precise calculation of psychologists on simple human feelings: people tend to idealize the years of his youth. respectively, material objects over time.
For young people 60-ies and 70-ies of the last century such objects were, of course, simple and cheap cars. The generation today with trepidation to the improved similarity of the cars of their distant youth.
I. EVSTRATOV