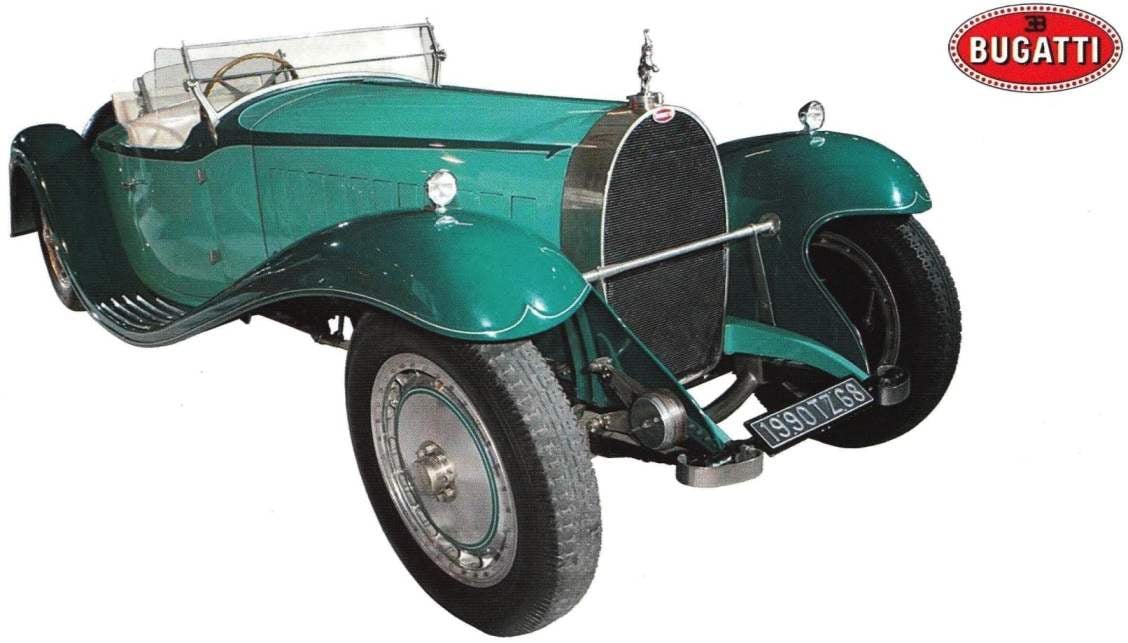 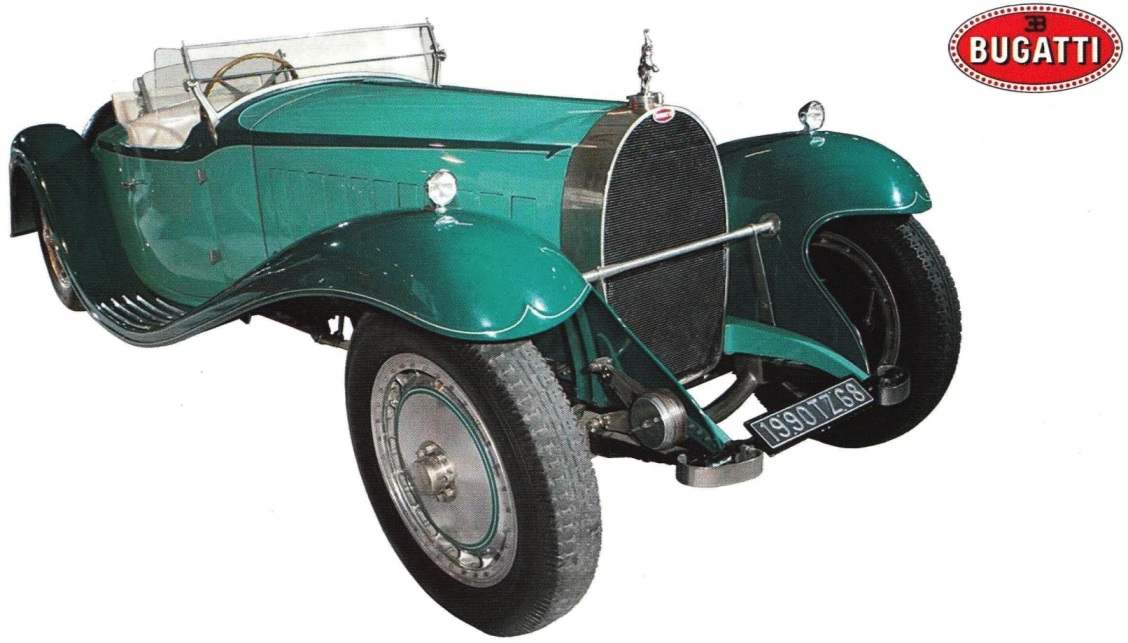 Among the hundreds of companies included in the clip the global automotive industry, there are many of those who were destined to lay as the Foundation of modern automotive industry and major design and design trend of designing cars. However, only few of them became famous producers of the most prestigious cars. Among them, the French firm Bugatti, reached in his time a genuine heights in the automotive industry through design and organizational talent of its founder — Ettore Bugatti. By the way, brilliant Creator of vehicles were self-taught — for some reason, the Maestro was not able to obtain an engineering degree.
The history of the company dates back to 1909, when 28-year-old Italian avtokonstruktor who have worked by the time about ten years at the enterprises of De Dietrich, Mathis and Deutz, founded in Molsheim Alsatian town near Strasbourg (at that time it was a territory of Germany), his own company.
The basis of the first serial machines of this enterprise was an easy car Bugatti Round 10, built by Ettore on own means even when he was working in Cologne at the company Deutz. The Assembly of this cars with inline 4-cylinder: engine capacity of 1,131 l Bugatti was produced in the basement of his house. As claimed by contemporaries, the car was although outwardly unprepossessing, but its chassis claims, no one was. It was used in the first production model, Ettore Bugatti called Round 13.
Racing car with a wheelbase of 2,000 mm was equipped with a row of 15-strong “four” working volume of 1,327 liters and could reach speeds of about 100 km/h In 1910, the company produced a small series of such vehicles — one of them said to race in a Grand Prix of France held at Le Mans in July 1911. To the great surprise of experts, the second place in these competitions was won by the car Bugatti Round 13, at the time still little-known brand, second only to FIAT with a 10-horsepower engine.
The first success and the resulting demand for car Ettore Bugatti helped the company in 1914 to produce several hundred cars, many of which have won prizes in European and world races. 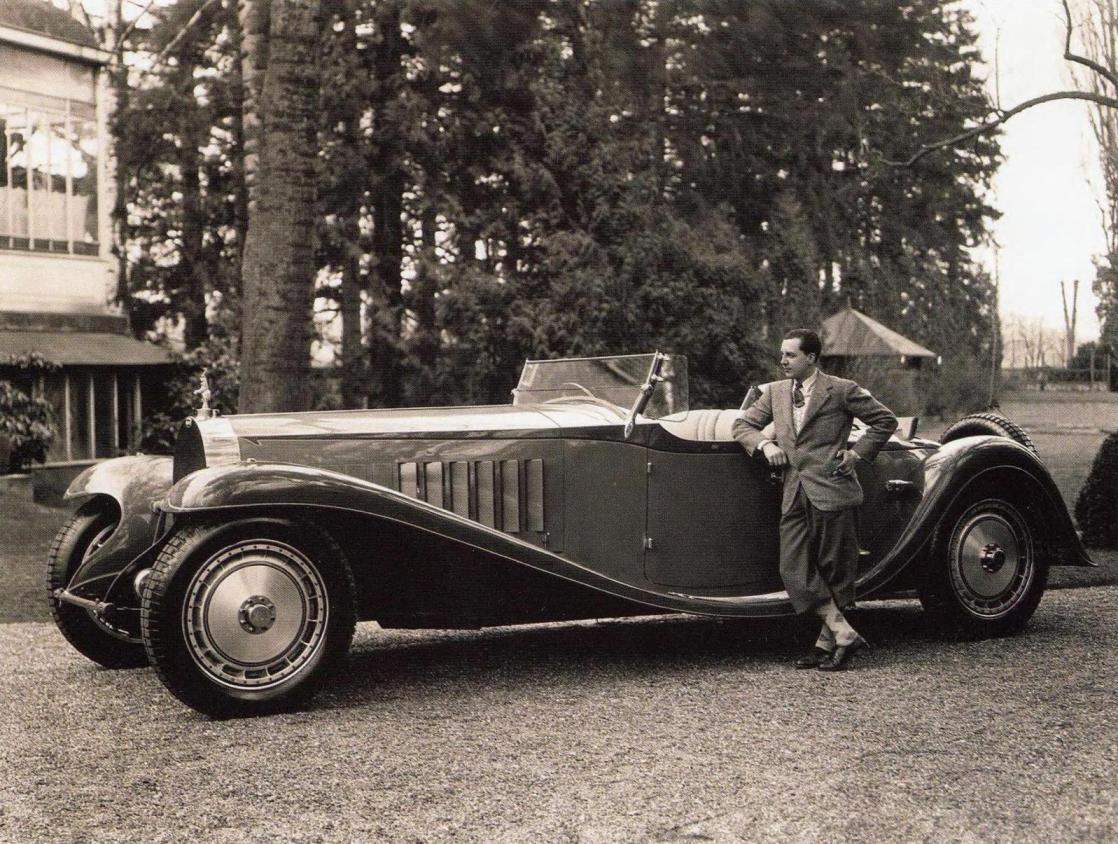 Jean Bugatti, the eldest son and first assistant of the great designer 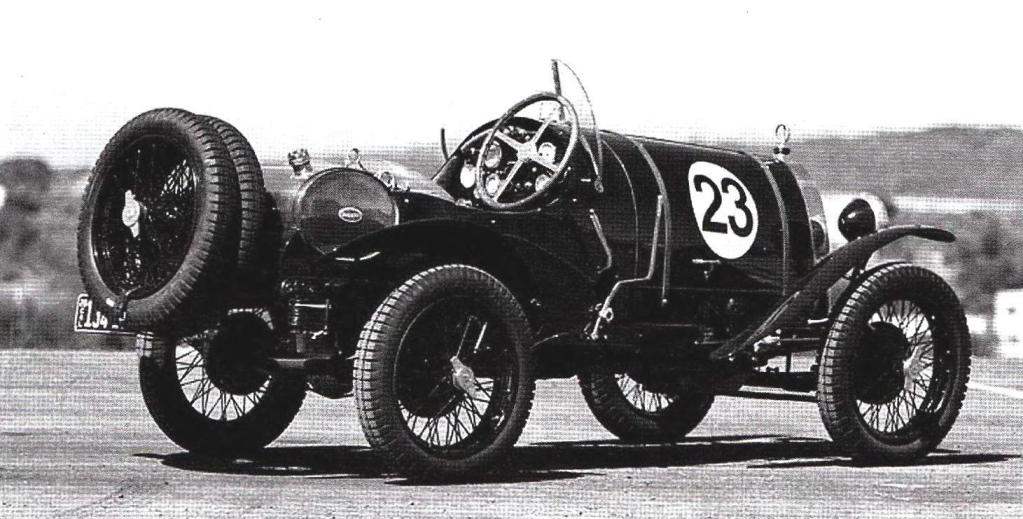 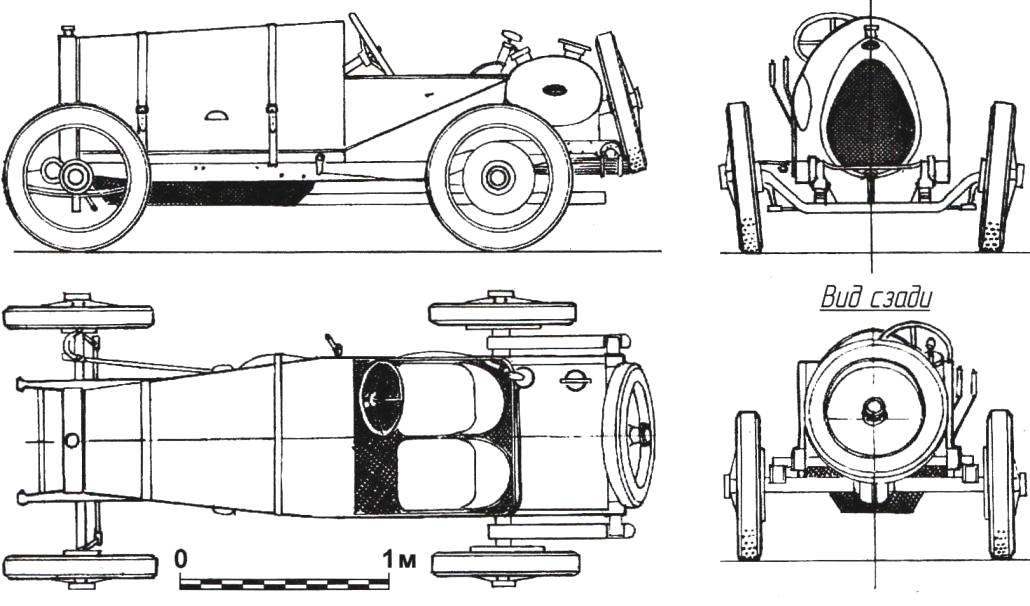 Bugatti Type 13 — the first serial car racing enterprises Ettore Bugatti (1911)
In 1913, Bugatti created a prototype 8-cylinder engine, collecting it from two row “fours” — later these engines were installed on the most prestigious and expensive models.
With the outbreak of the First world war, Ettore Bugatti had to sell the license to manufacture their racing machines the firm РЕUGЕОТ. The first postwar attempt to create a large luxury car, dubbed the Bugatti Round 28, row 90-strong “eight” working volume of 3 l was made by the designer in 1921. The car was equipped with many interesting devices and mechanisms designed to improve driving comfort and driving performance but the most important novelty that struck contemporaries, steel brakes on all four wheels with hydraulic drive.
One of the most unusual models in the beginning of 1920-ies was a racing car Round Bugatti 32 Tank, named after the original order time the body a streamlined shape. Bugatti had high hopes for this car, built specifically for racing the Grand Prix, however, of the four machines of this type the prize (alas, only the third) took place only one of the “aerodynamic” “tanks”. However, the serial model on the basis of Round 32 bought up by wealthy car enthusiasts very happy. 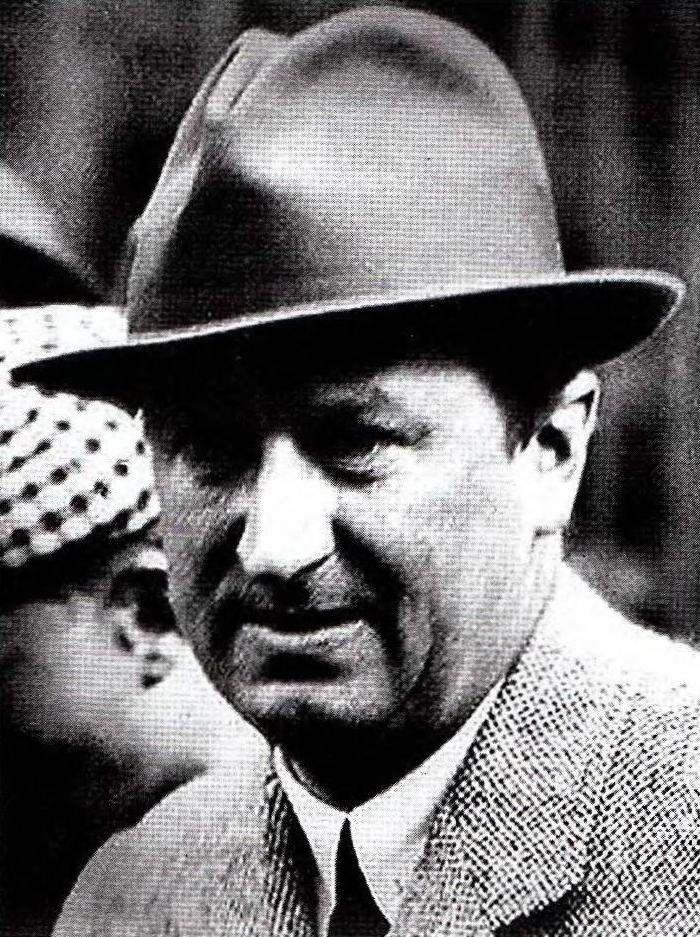 Ettore Bugatti — the head of the French company BUGATTI
Ettore Bugatti is still not left hopes to create an “Absolute champion”, and in 1924 his work was finally crowned with success: in the second stage of the European Grand Prix four racing car Bugatti Matchday 35 took the first four places! Subsequently, six more years of this type of car was “Absolute champion of the world”, is not allowed on the prizes are the most famous rivals. The result of the many victories of the Bugatti Round of 35 (there were over 1800!) was a sharp increase in car sales that brought the company considerable profit.
Europe and America swept the fashion for sports cars. Basing on the race car, it was equipped with wings, footrests, enclosed cab and headlights — and the first high-speed tracks in vehicles of the most prestigious brands famously drove wealthy Bohemians.
So, we came close to the crown of the engineering activities of the Ettore Bugatti, realized in the car that automotive historians call the pinnacle of technical thought of the 1920-ies. The idea of creating a “Royal car” looked at Bugatti, judging by his correspondence, 1913, but the First world war and the postwar financial difficulties delayed the work until 1926. It argued that the indirect motive of creating superprestizhnogo car was impartial evaluation of one of the firm’s senior English lady: “Your limo, Mr. Bugatti is certainly good, but it’s not “rolls-Royce”. 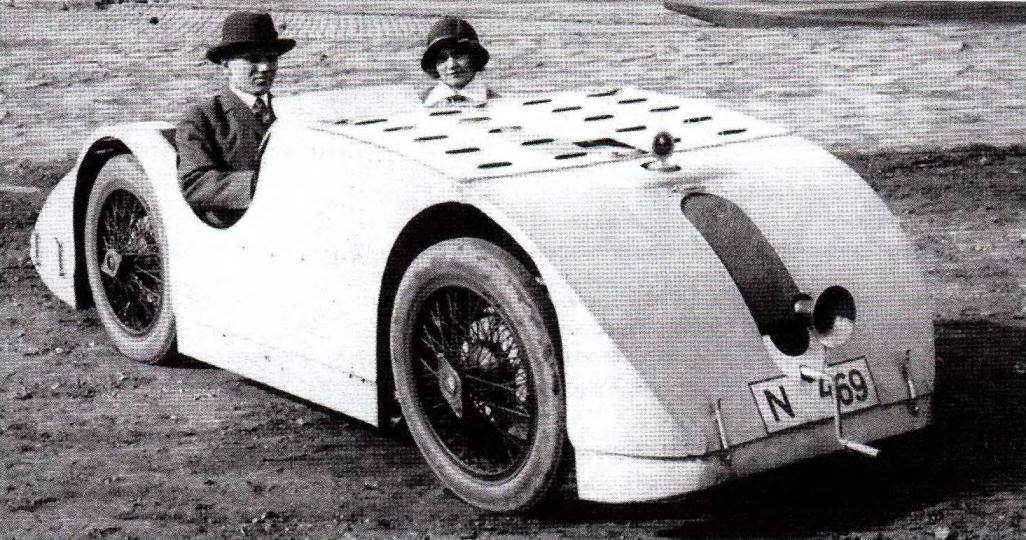 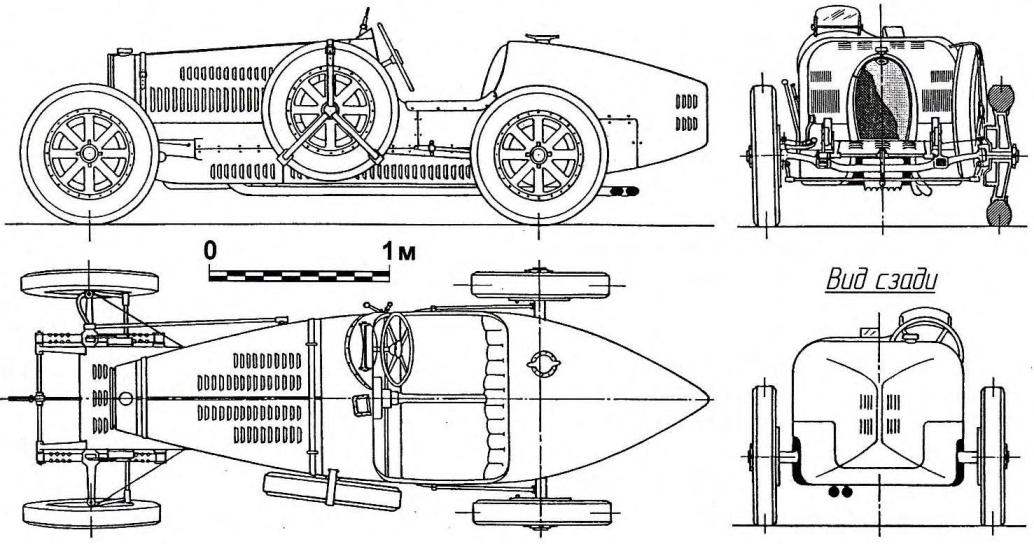 Bugatti 35 Tour — the legendary racing car edition of 1924, who won over 1800 victories in European and world Championships 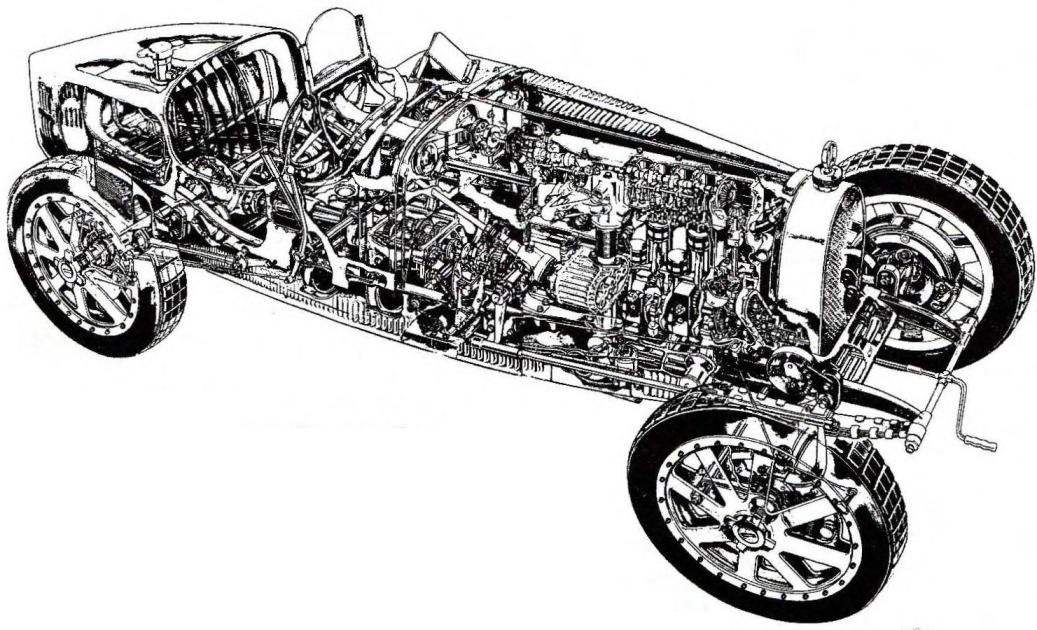 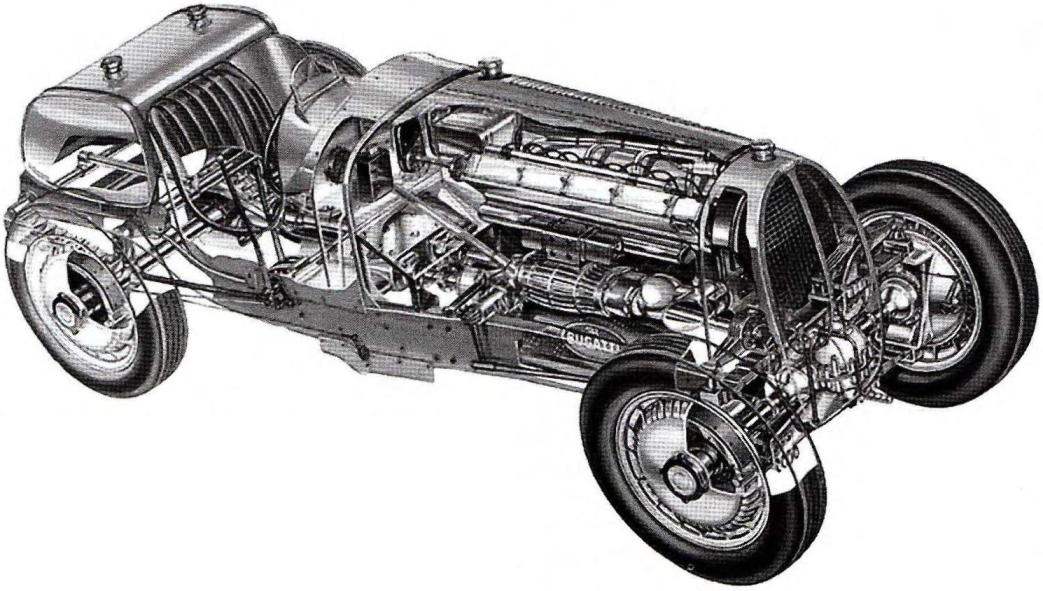 Bugatti Round 53 — all-wheel-drive racing car with a 140-horsepower 8-cylinder engine (1931)
Getting started designing a new car, great designer formulated this challenge: “I wish my car was more of a Hispano-Suiza and Rolls-Roice, but had a smaller mass. So she developed a speed of 150 km/h, but it was silent. So the warranty on it was up to five years, and all knots of the car was above criticism”.
Round Bugatti 41 Royale — the name given to this car (royale — Royal), designed by Ettore Bugatti and his son Jean, and released in 1929. This huge and luxurious the craft may be called a land yacht — their length was 6400 mm wheelbase 4320 mm gauge — 1,600 mm and a weight of 3,175 tons!
It was supposed to produce 25 of these super-expensive machines that cater exclusively to members of Royal families. However, the intensity in 1929, the Great depression forced the entrepreneur to restrict the release of only six copies, three of which are acquired although millionaires, but not persons of Royal dignity.
The remaining unsold copies remained in the family of Ettore Bugatti.
Each of the six cars have individual, exclusive exterior, booked into the best body shops, and his own name. So, one of them, released in 1931, was called the Round Bugatti 41 Royale Berline de Voyager, another Bugatti Type 41 Royale Kellner Coupe, the third — Bugatti Type 41 Royale Sports, the fourth — Bugatti Type 41 Royale Weinberger Cabriolet, the fifth Bugatti Type 41 Royale Coupe Napoleon and the sixth — Bugatti Type 41 Royale Coupe de Ville.

Round Bugatti 41 Royale Weinberger Cabriolet — superprestizhnogo “Royal” car, manufactured by the company Ettore Bugatti in 1932. The design of the car was developed in Munich bodywork Studio Ludwig Weinberger 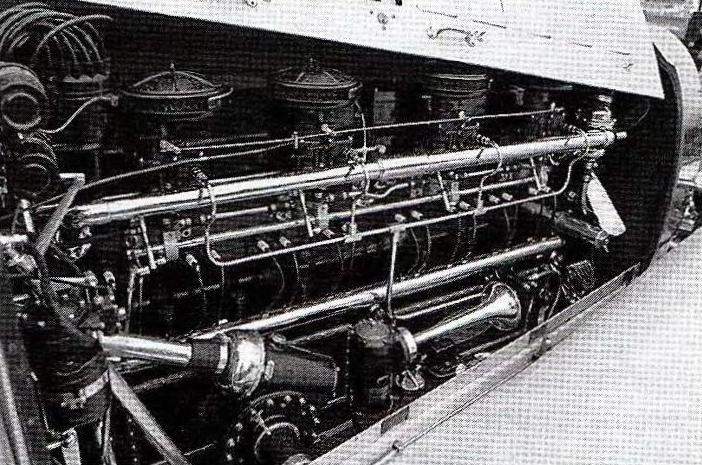 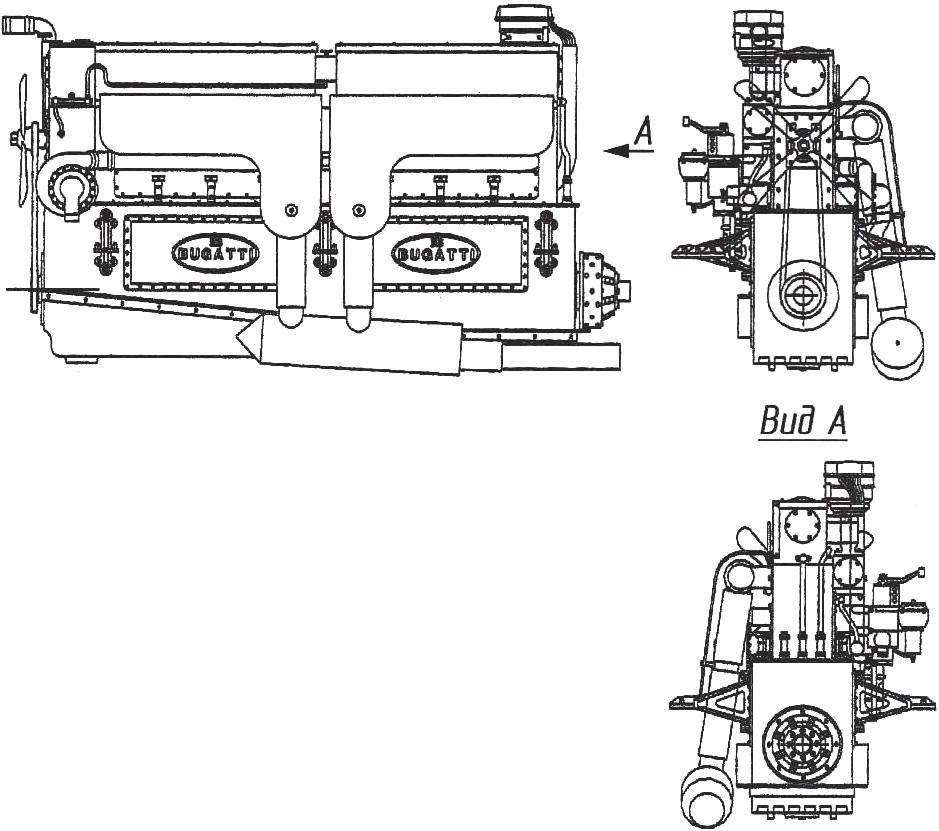 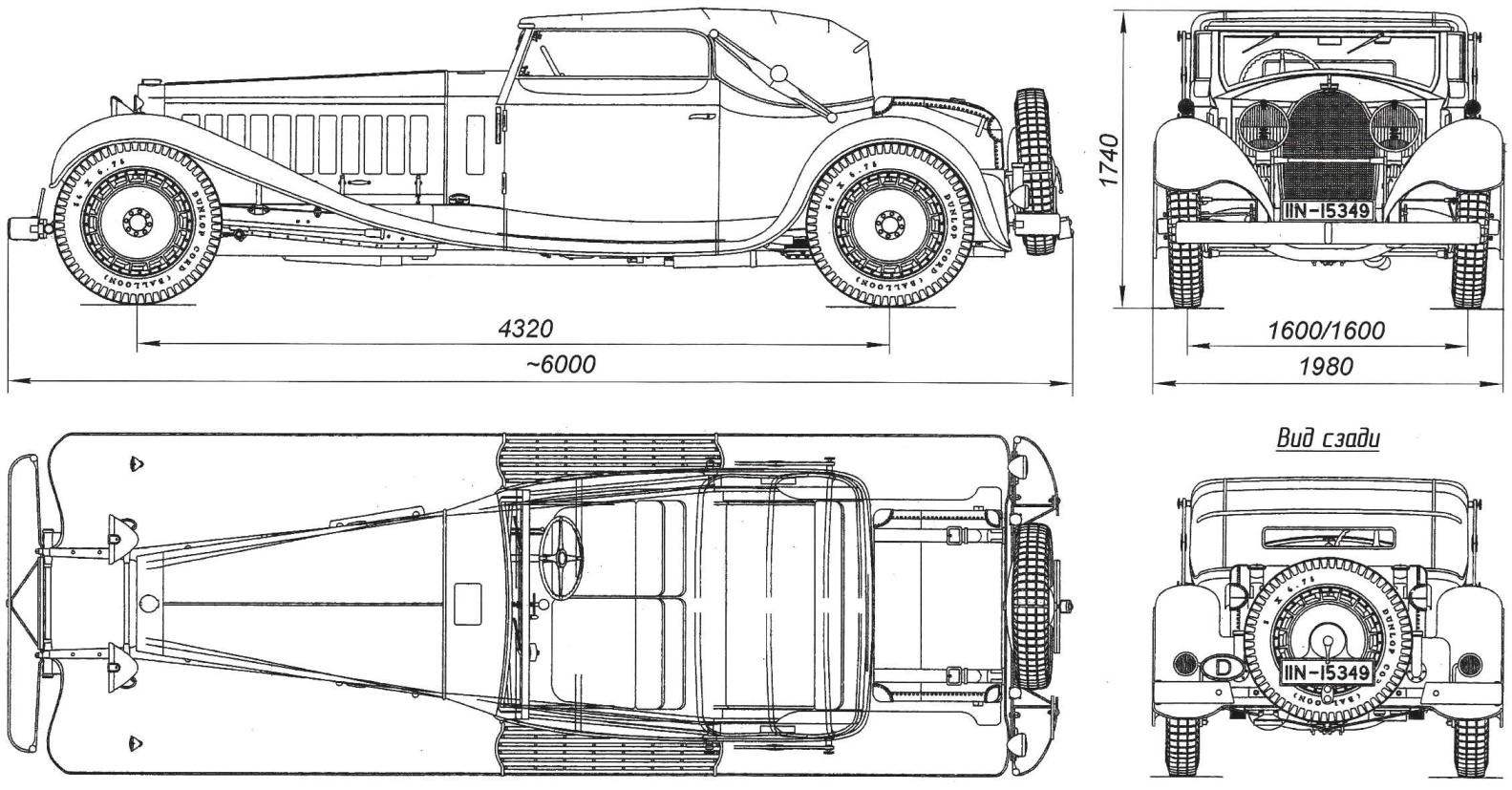 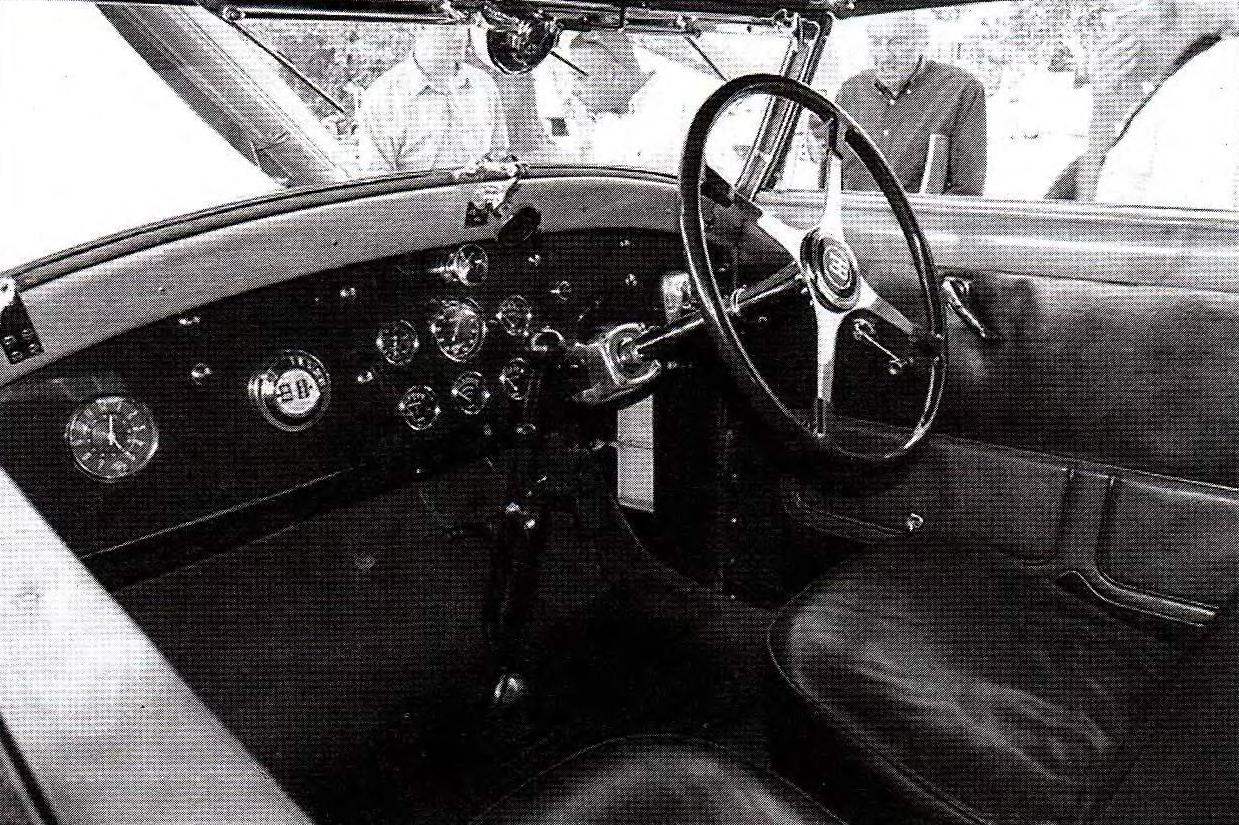 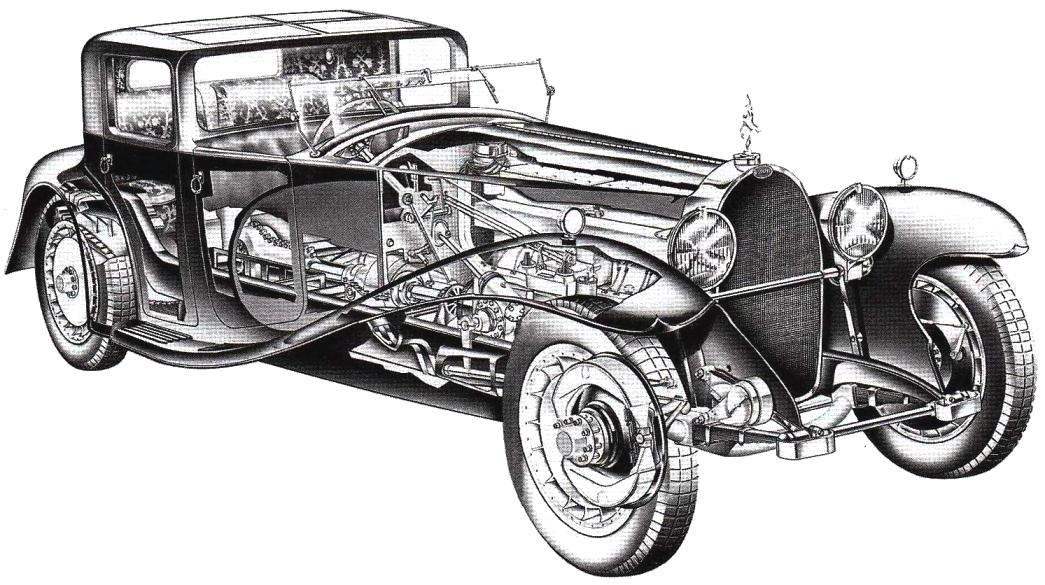 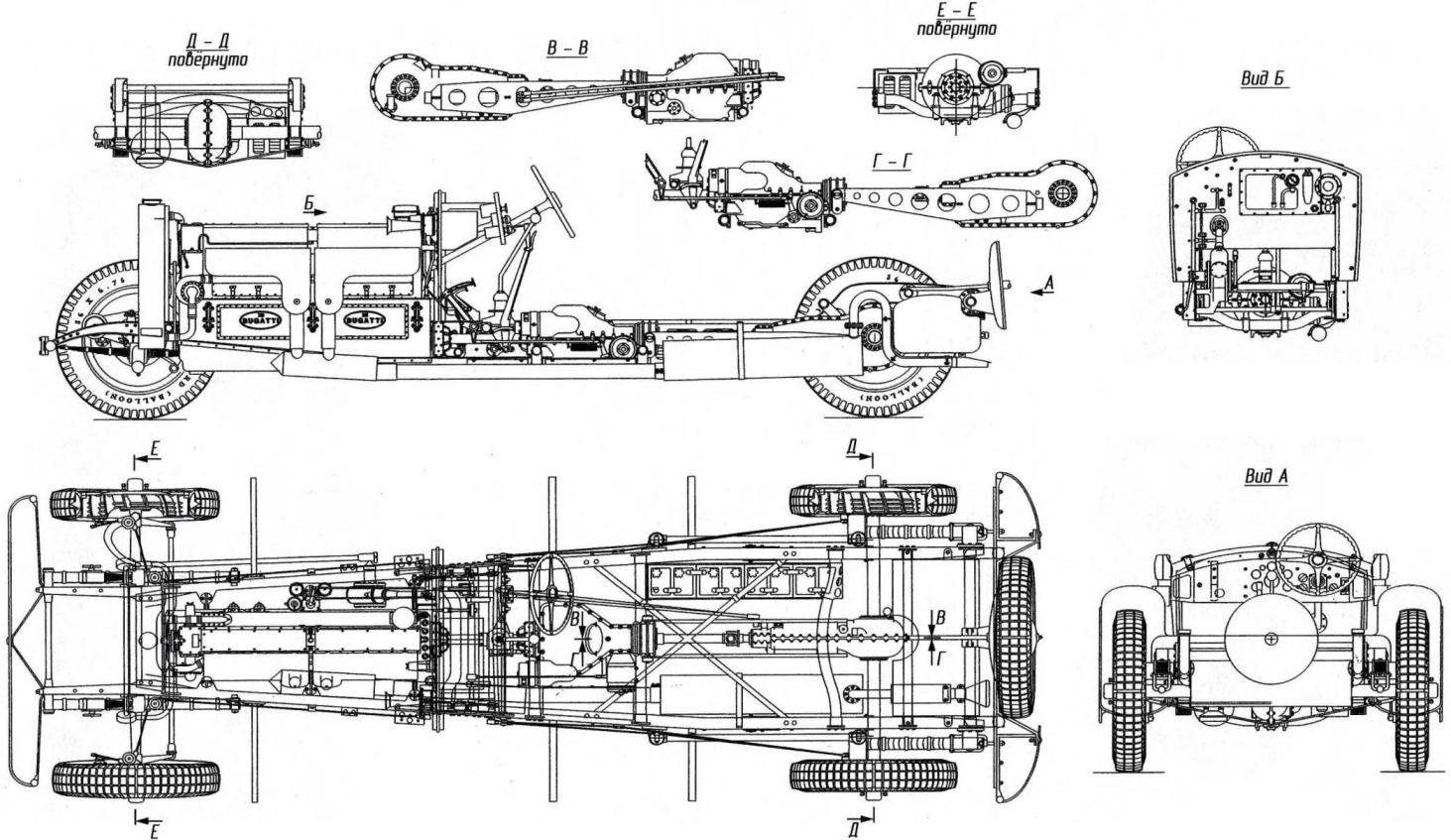 The chassis of the car Round Bugatti 41 Royale Weinberger Cabriolet 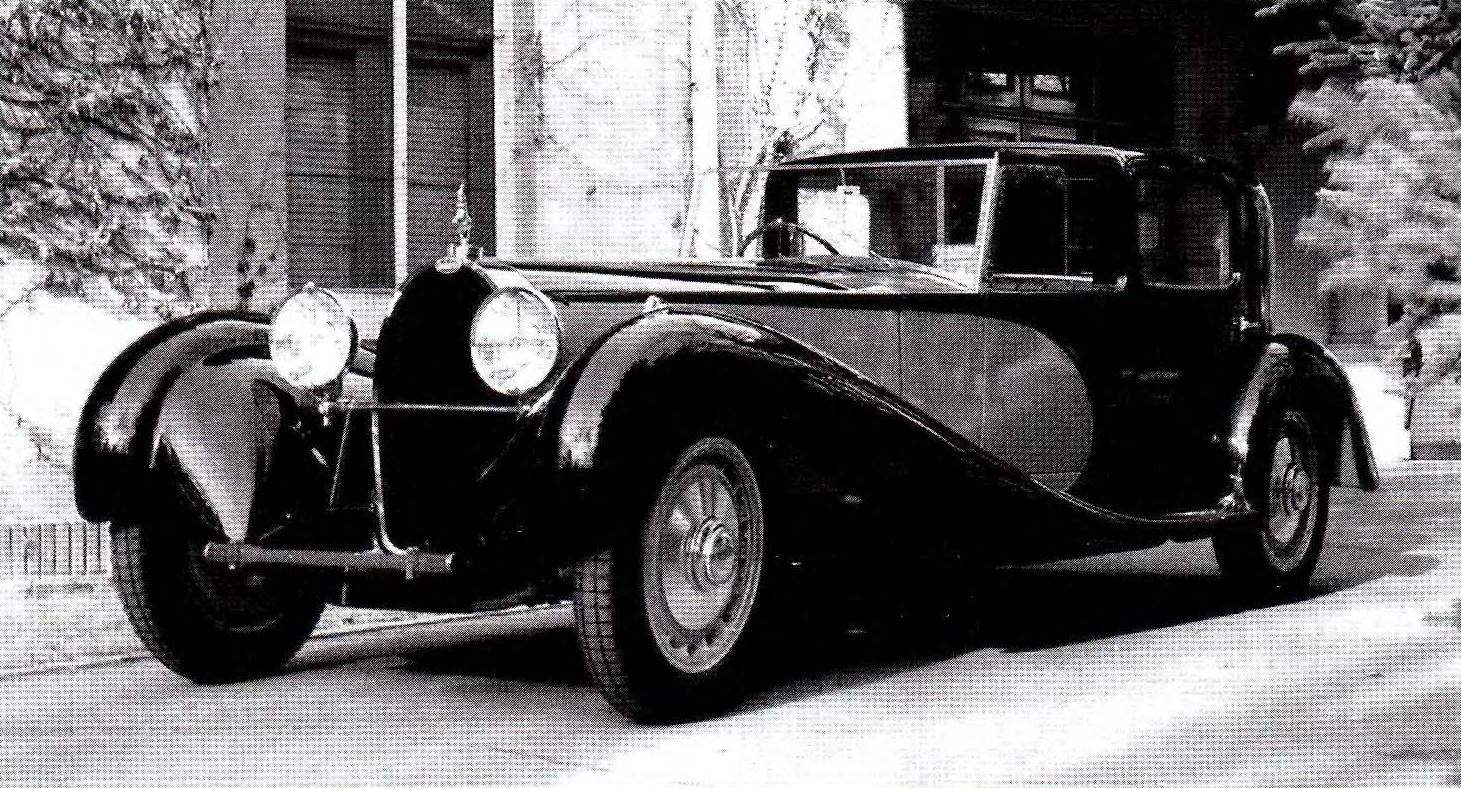 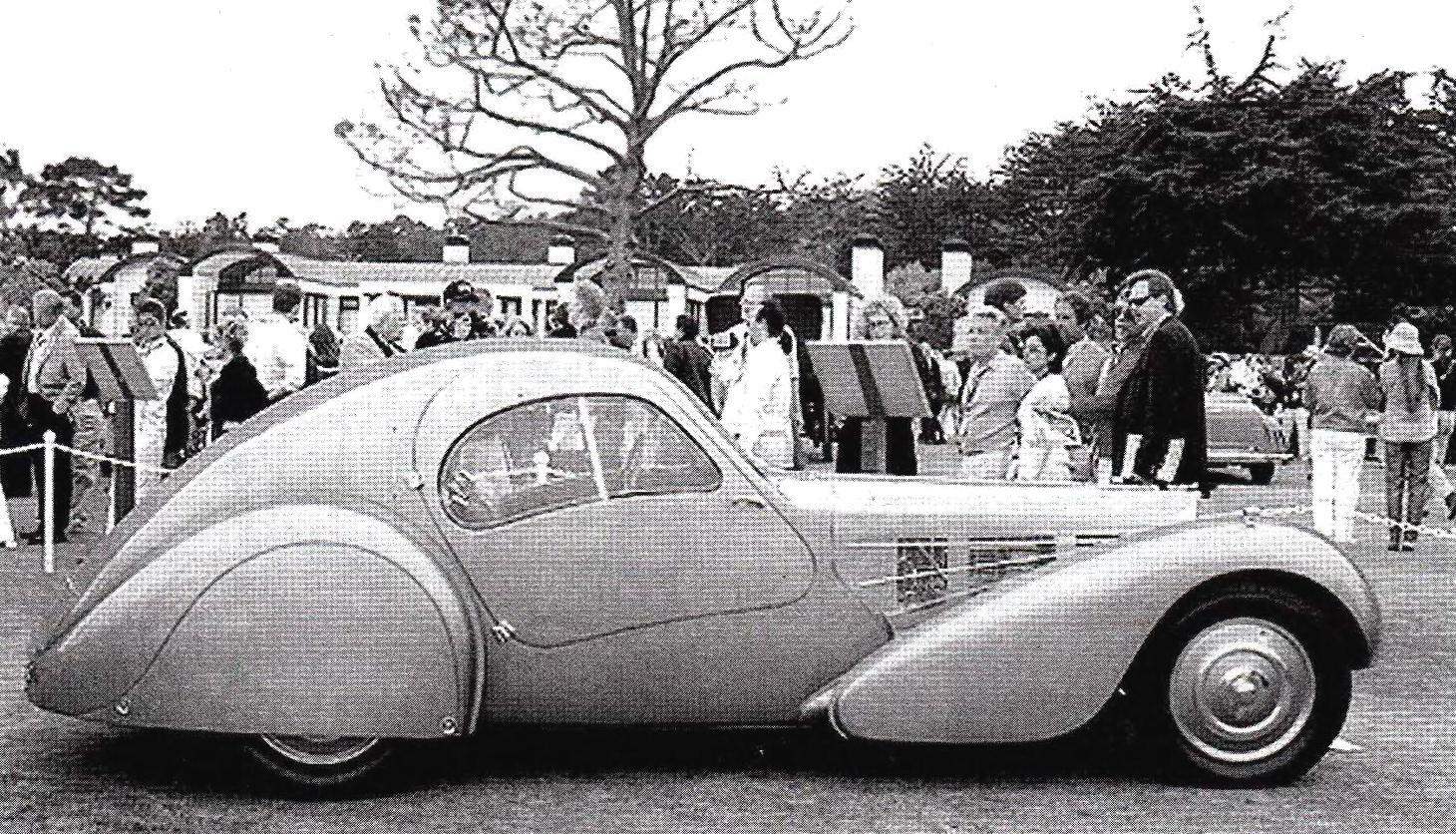 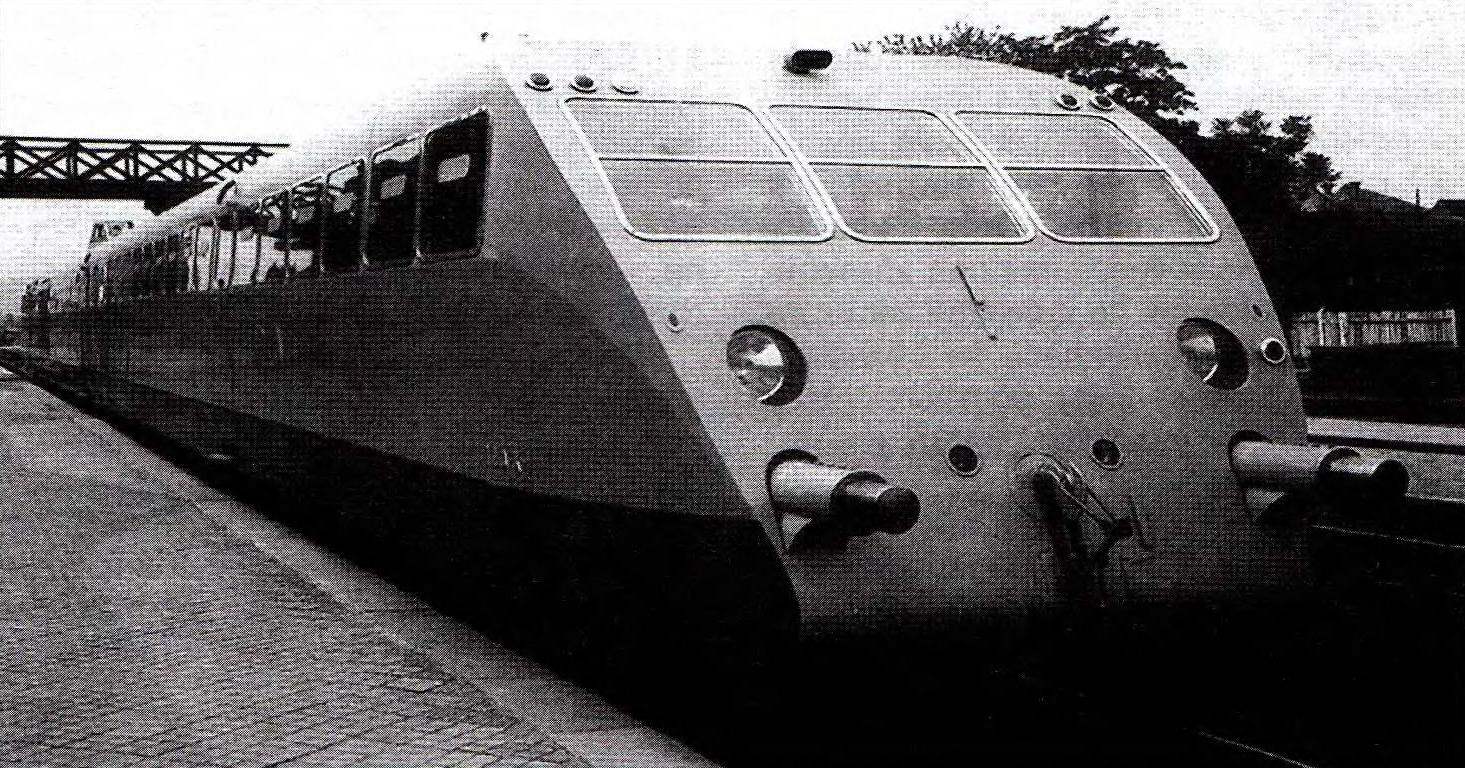 The company Ettore Bugatti produced not only cars, but also comfortable and high-speed motorwagon. Composed of them two – and three-carriage trains, develops a speed of up to 196 km/h, equipped with two or four 8-cylinder 260-horsepower motors, designed for machines of the “Royal” series
In 1934 began production of the Bugatti 57 Round with a 150-horsepower engine, which successfully combines sporty dynamics and luxury prestige cars. These machines are produced in several modifications, the Type 57s with a 190-horsepower engine, the maximum speed which has reached 189 km/h, was lower and shorter than the prototype, and Round 57sc with a 200-horsepower compressor motor speeds up to 200 km/h.
In 1936, the attention of the sports community drew Round cars Bugatti 57 Tank — car with the “aerodynamic” bodywork took first place in the race Grand Prix of France at Le Mans “tanks” were the winners of the race with the best result in average speed of 137 km/h. One of the “tanks” has also set a speed record for his class of 218 km/h.
In 1939 there was an even more powerful car 57-series — Bugatti Round 57s45 with a 200-horsepower engine with a displacement of 3,257 liters, which won about 20 victories, including at Le Mans. However, they were marred by the death of Jean Bugatti, son and longtime assistant of the great designer who made a considerable contribution to the development and creation of the car company. Returning from the races at Le Mans, Jean flew off the road to avoid a collision with the drunk cyclist.
The last car built before the Second world war became a Round of the 64 — car flip-up doors — it was made in a single copy.
In the postwar years, luxury cars, production of which has specialized firm Bugatti, was the Europeans can not afford. In 1947, at the automobile exhibition in Paris was shown a new model of the Bugatti Round 73 with a 4-cylinder liter engine. However, in August of the same year the great Maestro died, and his family was not able to bring this car to the series. In the early 1950-ies was made another attempt to release the car under the famous brand is Bugatti Round was 101, representing a modified Round 57. However, the machine was outdated in design and winning design.
In 1963 the company was transferred to the company Hispano-Suiza, launched the production of aircraft equipment. Well, Bugatti…
…Bugatti continued to exist in the virtual (as they say now) the world. So, in 1964 the famous Italian firm Ghiа created a showpiece Bugatti car Round 101с. And in 1989, in Italy, a new company called Bugatti, which is the example of the great predecessor undertook the creation of super-expensive and super-fast sports cars. However, the great success of these machines had. 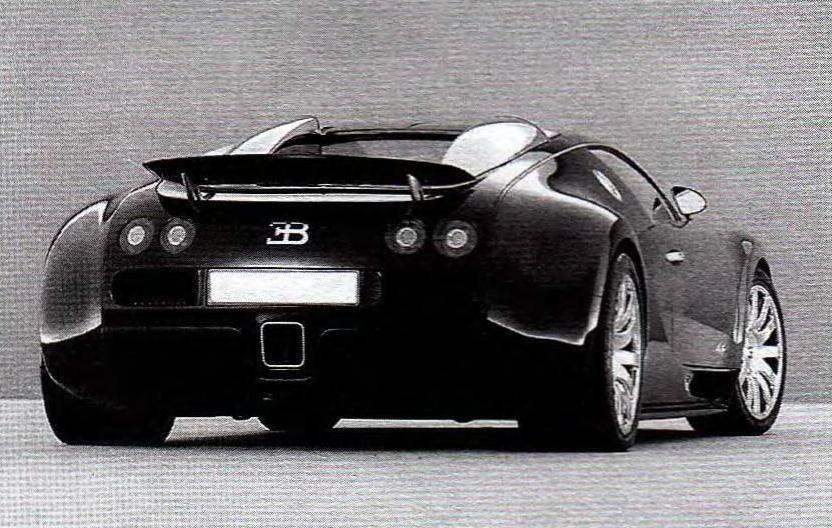 Today the brand with the Bugatti brand cars are produced by Volkswagen. In pictures — 14.4 supercar EB Veyron to reach speeds up to 300 km/h
In 1993, the famous trade mark enterprises acquired by Volkswagen. The first car with the Bugatti brand was fiberglass ЕВ118 with a body of type “compartment”. The development of the external appearance of the car was entrusted to Fabrizio Ju-Jaro, the well-known stylist company ItalDesign.
In 2000, Volkswagen presented to the public next supercar called the Bugatti EB 16.4 Veyron price of $ 1 400 000, equipped with 16 cylinder engine producing 1001 HP On the test car was accelerated to a quite “airplane” speed 407 km/h, and the testers claimed that this speed is not a limit for the supercar.
Serial production of the vehicle would be completed tentatively in 2010, when it will be made of 300-copy — the fact that such exclusive cars like the Veyron, it is impossible to produce in large quantities. Remember that “Royal car” Ettore Bugatti was only six…