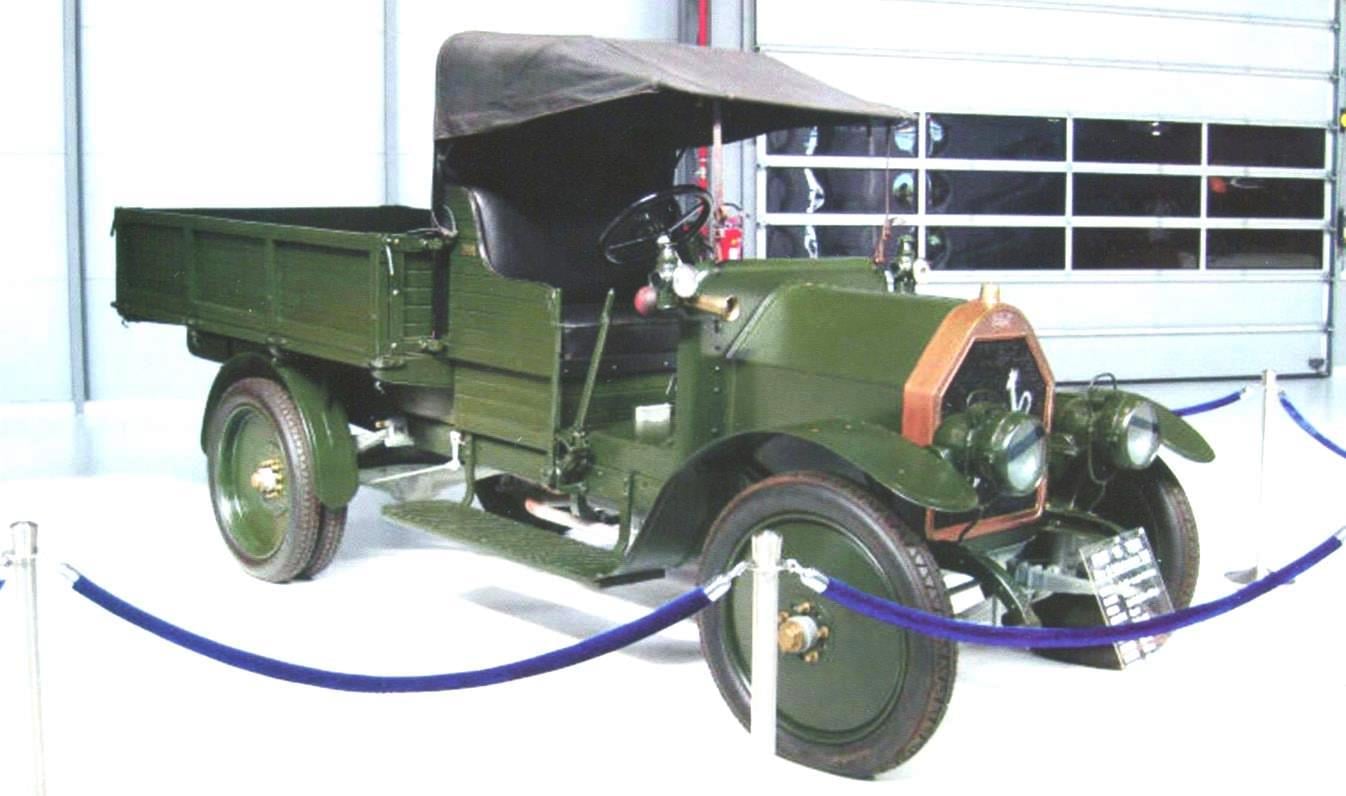 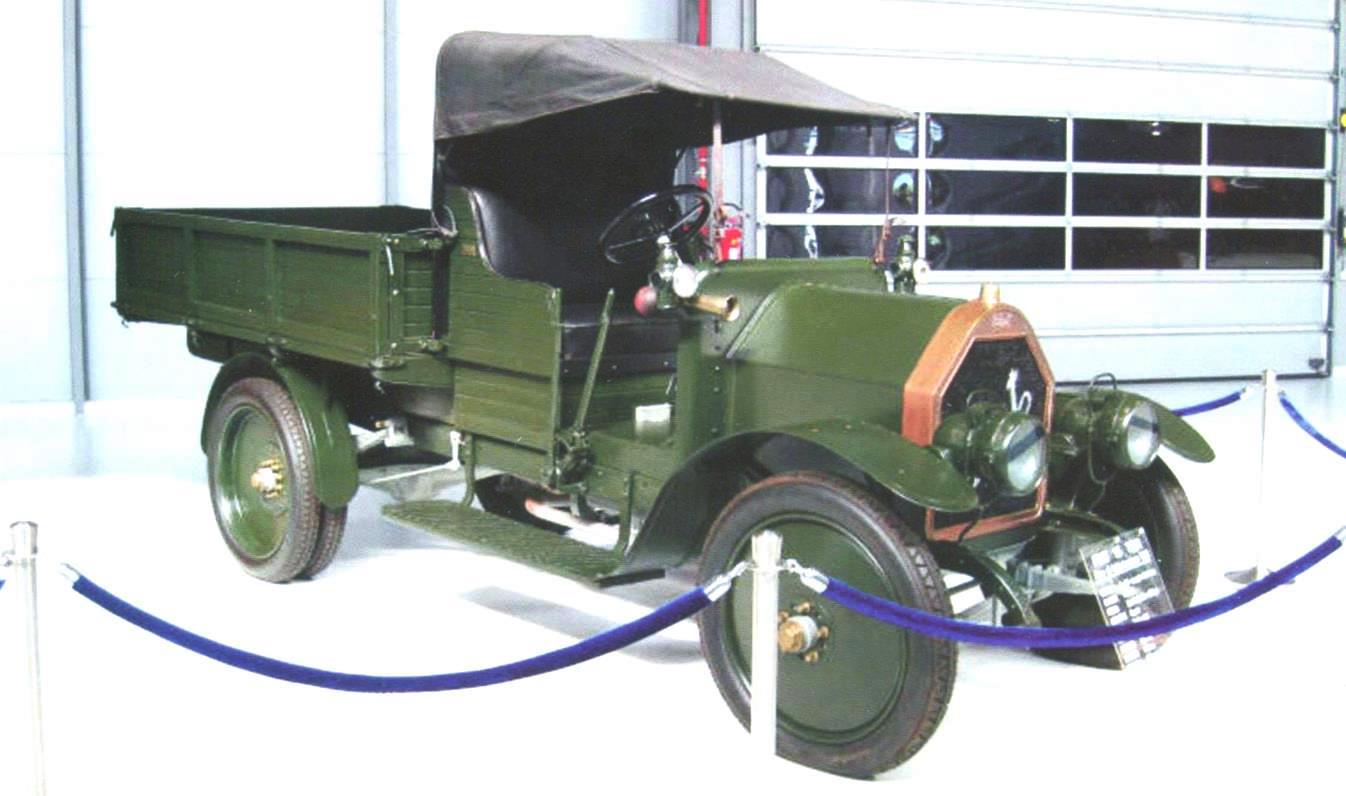 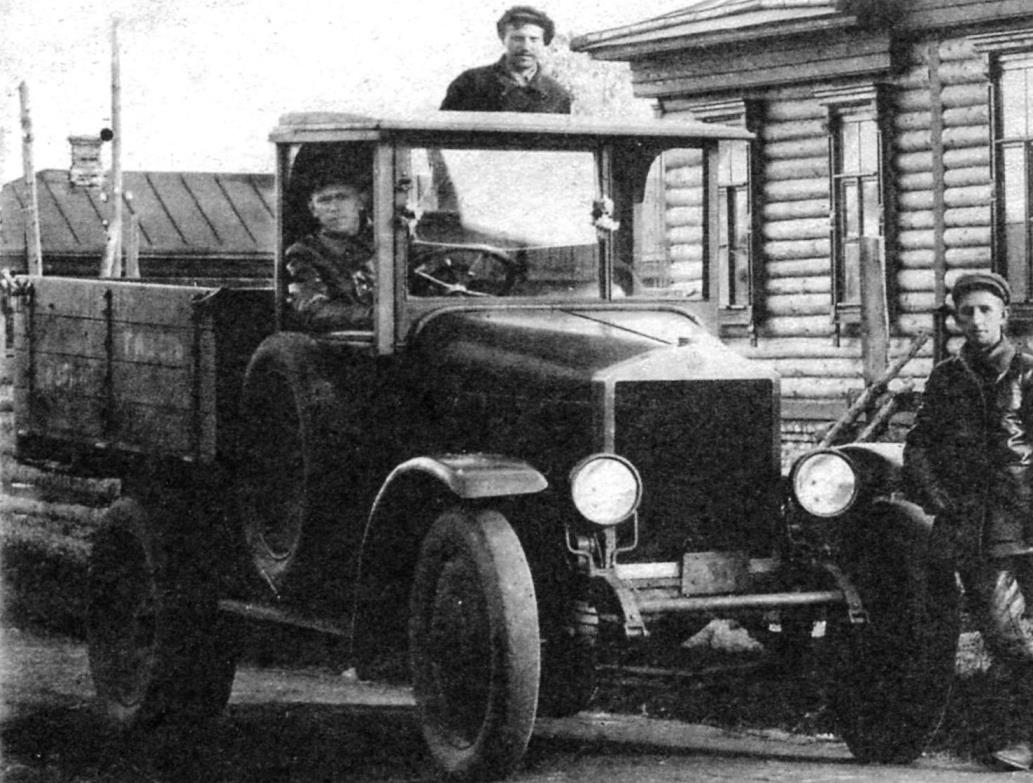 On the night of November 1, 1924, the workers took the first car entirely manufactured in the factory AMO. One of the mechanics, bent his head low in front of the radiator with the Soviet, and not a foreign brand, spun winding the handle-and AMO-F15 No. 1 came to life. A few laps in the factory yard did then this… not even a car, and naked – without a body and cabin – chassis with inverted box on the frame instead of the seat.

The next morning, car # 1 was fully “dressed.” In the first test drive it went, he’s chief designer, Vladimir tsipilun. According to I. A. Likhachev, who subsequently 23 led plant, then AMO “car no one knew, except Tsipulina”. Vladimir did a lot for the development of the production of the first Soviet trucks. And so when a dozen scarlet (even the seats have red upholstery) AMO-F15 was held on 7 November in the ranks of the demonstrators on red square, lead car led Tsipulin.
At the first Soviet truck were 4-cylinder engine Nizhnekamsky. Lifting the hood, you could see surprisingly “smooth” motor. On the right hand side directly to the cylinder block is attached to the carb on the left is a very simple form the exhaust manifold. The intake channels were cast in the body. On caps timing gears, valves and cylinder block stood out in relief lettering “AMO”.
You can find many funny from a modern point of view structural features in the AMO-F15. For example, the accelerator pedal was located between the brake pedal and the clutch, not the right of them. A rear axle housing of one piece with the casing of the propeller shaft, forming a knot shaped like the letter T. On the cross was located driving wheels, and the front, pushing through the hinge in the traverse frame, transmit push forces (now being transferred to the frame by springs). Rear axle housing consisted of two halves which are held together with 43-mja by bolts. Interestingly, the rear wheels were not parallel to each other, and had, like front camber. He thought to form a crankcase of the rear bridge and were one degree. 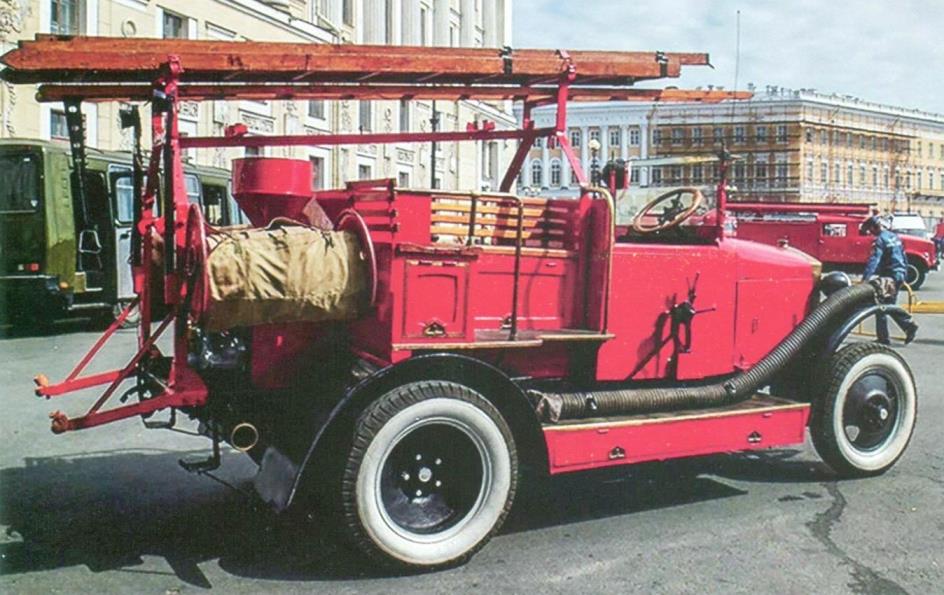 Fire-fighting vehicle plant “Promet” based on AMO-F15 from the Museum of fire equipment in St. Petersburg 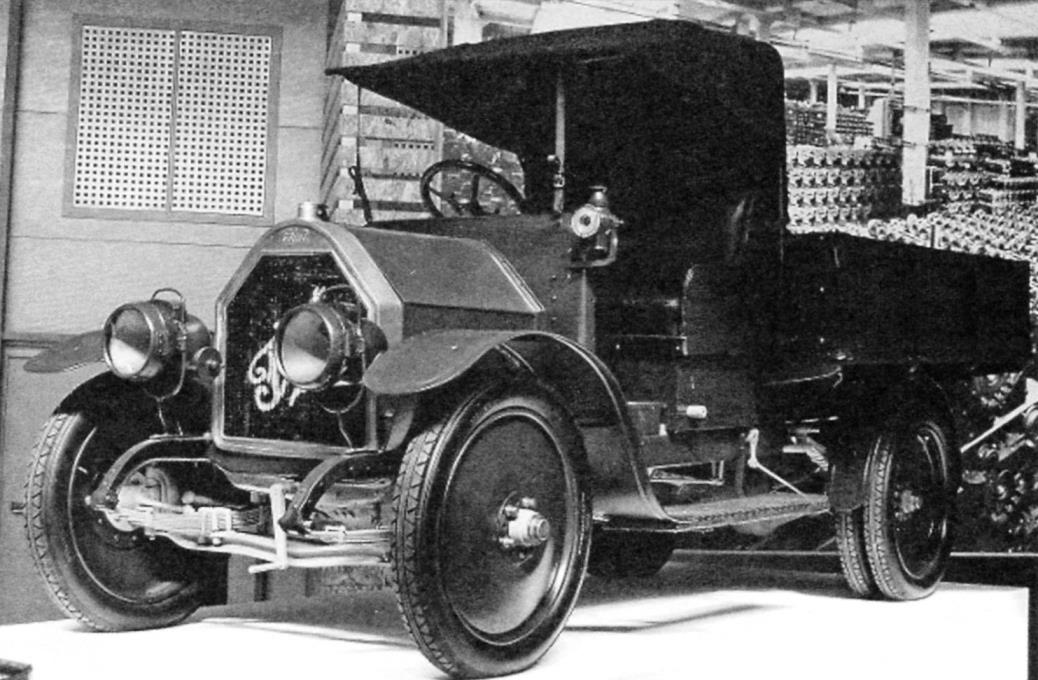 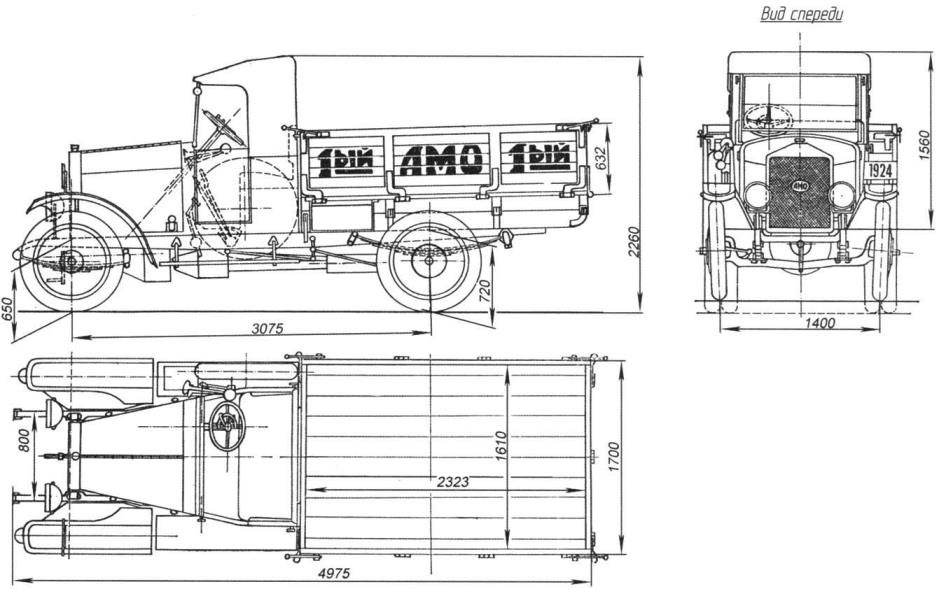 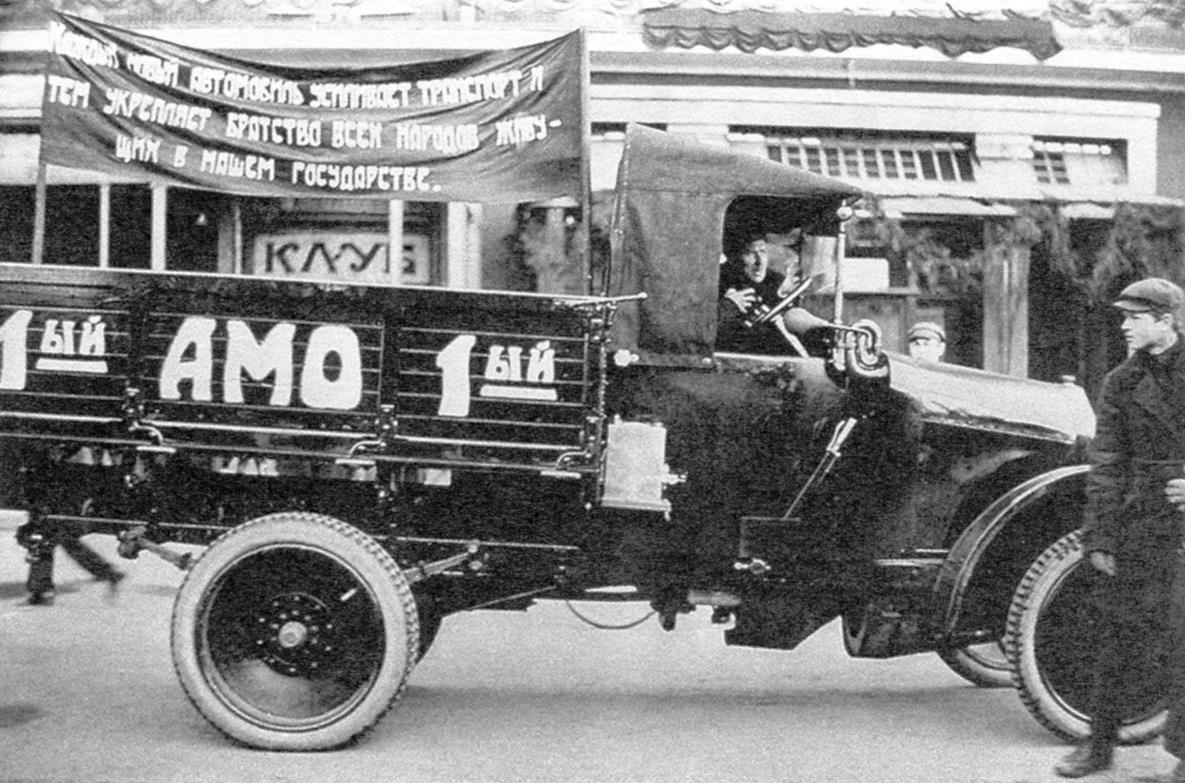 Car AMO-F15 in the top ten (1924) with a canvas cab roof
After the first ten polutoratonny truck plant AMO began systematically to produce cars in 1925, 113 pieces, next — 342, and then more and more. But it wasn’t just quantity. In 1926, significantly changed the design of AMO-F15. Replaced collapsible canvas top of the cab came a hard roof, rear wall and a removable side cover. More simple configuration got the radiator, control arms moved inside the cabin. Instead of a whistle blower began to mount an electrical signal, acetylene lights gave way to electric, and in addition to the winding lever machines began to be equipped with an electric starter. In addition, factory experts have reconstructed the clutch, steering gear, moved the gas tank under the driver’s seat, reduced the size of the flywheel, so when you move through the bumps he did not cling to them.
Moreover, AMO-F15 was subjected to thorough modernization, its chassis was used for the construction of ambulance (1925), buses (1926) with 14 seats, seven passenger and staff, firefighters and armored cars, vans for transportation of mail (1927).
We publish here the pictures of some modifications of the car AMO-F15, called the figures of the number of their release in the early years. Millions of copies of the cars, I doubt it would be possible if the economy does not produce powerful presses for stamping large panels of car bodies, high-performance lines for processing of cylinder blocks or units for cutting hypoid bevel gears for rear axles. The automotive industry supporting the whole industry of the country. Factory AMO was barely able to step from hundreds of cars a year to tens of thousands, if in the USSR there was established own production powerful presses for stamping large panels of car bodies, high-performance lines for processing of cylinder blocks or units for cutting bevel hypoid gears, rear axles, ball bearings and alloy steels, modern machines and durable tires. Such a complex product as a car, but still generated at scales much larger than locomotives or machines, requires in its release directly or indirectly involved the entire industry.
TIPS ON MODELING
AMO-F15 belongs to typical trucks of the twenties and at first it seems very simple object modeling. In reality, you need to show dexterity, as this car has many parts and equipment were on the outside, and executing them in a small model -it is quite laborious.
The radiator is the easiest thing to do from a thick brass plate, to napati her copper grid (soldering copper!) and the letters “AMO” in a circle or in an oval (different cars of different years of release). Don’t forget that swivel the “feet” of the radiator is also visible, they rely on the longitudinal beams of the frame. The headlamps have a smooth, meritline glass and mounted on forked brackets on the front fangs of the frame. The spare wheel is installed with the convex side against the wall of the cabin.
The exterior of the truck AMO-F15 passed through three stages of development. First of an experimental batch of 1924, the cabin was equipped with a tent, a radiator and the hood had a in cross-section slightly rounded shape with a high “house” at the top. In the second stage (1925) the radiator and the hood acquired a flat face, but the tent still remained. This is the car shown in the drawing, but for those modelers who will be using other images, to do “the first” AMO, we’re pictured on the platform of a genuine inscription. On machines later release (since 1926) awning replaced the hard top on the legs (the third stage).
Surely, you would think that the artist forgot to show in the drawings and the drawings of the vents on the hood sides. No, not forgotten: the vents were not, AMO-F15 had the original cooling system of the engine. Fan served open engine flywheel with a cast in his body eight blades. He pumped the air through a honeycomb radiator and engine compartment down and under the body. The housings of the cooling system in the same way as the muffler, can be clearly seen under the frame. 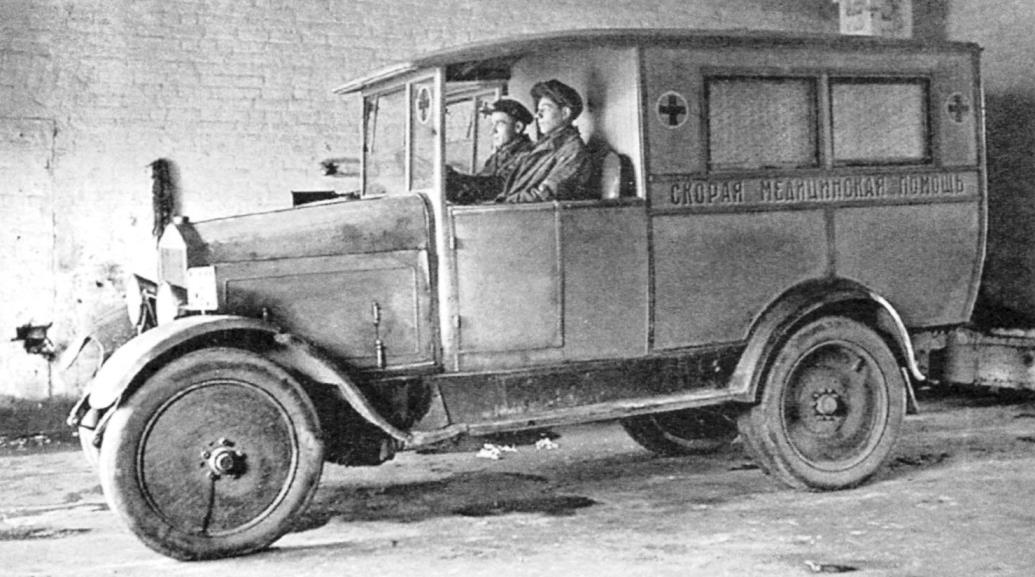 The “ambulance” on the chassis AMO-F15 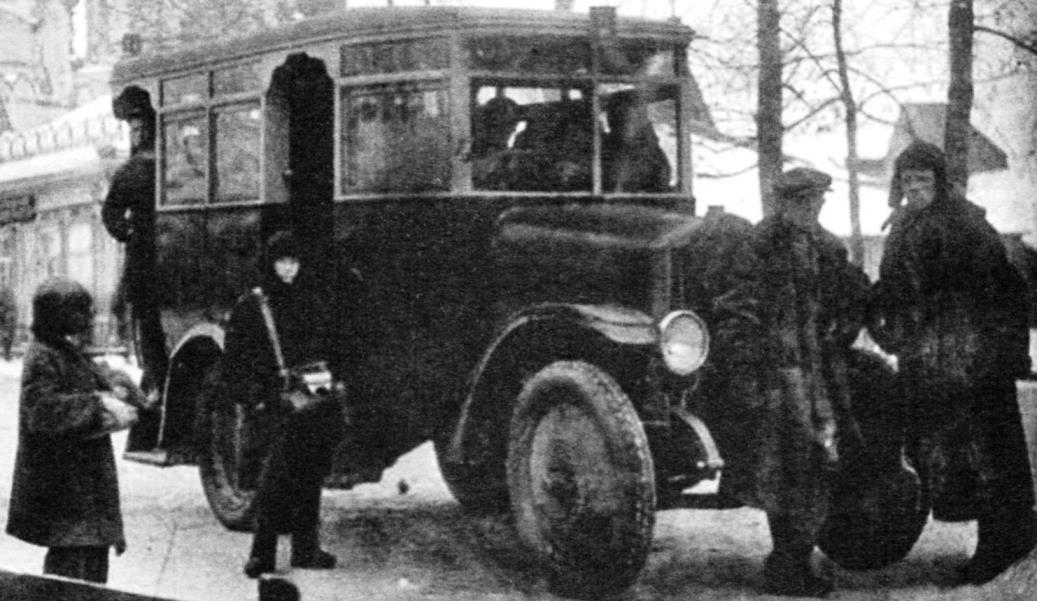 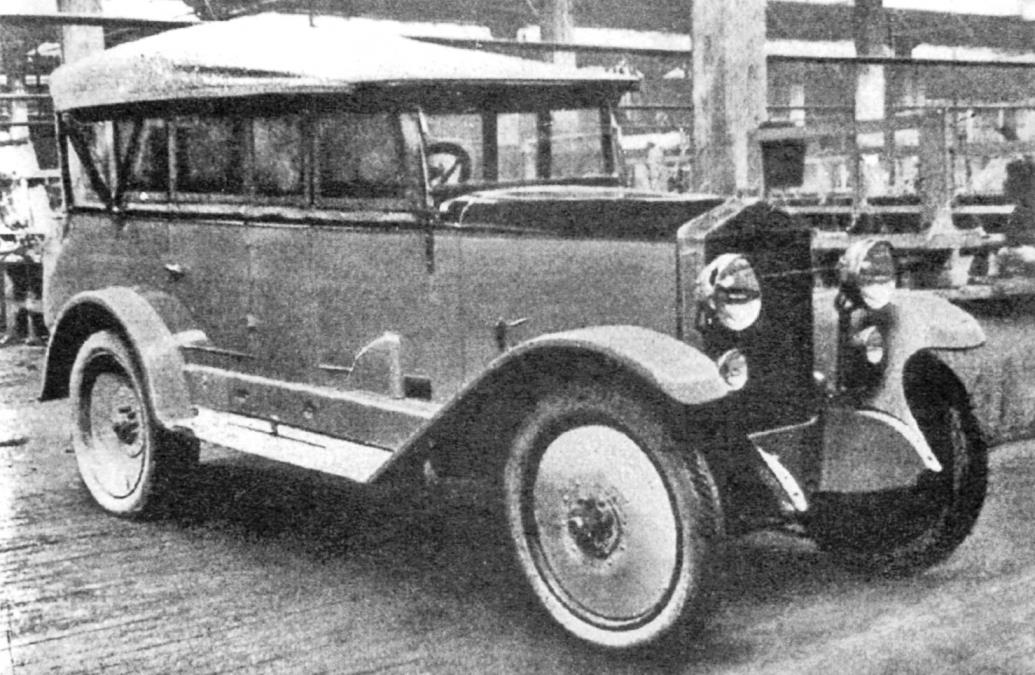 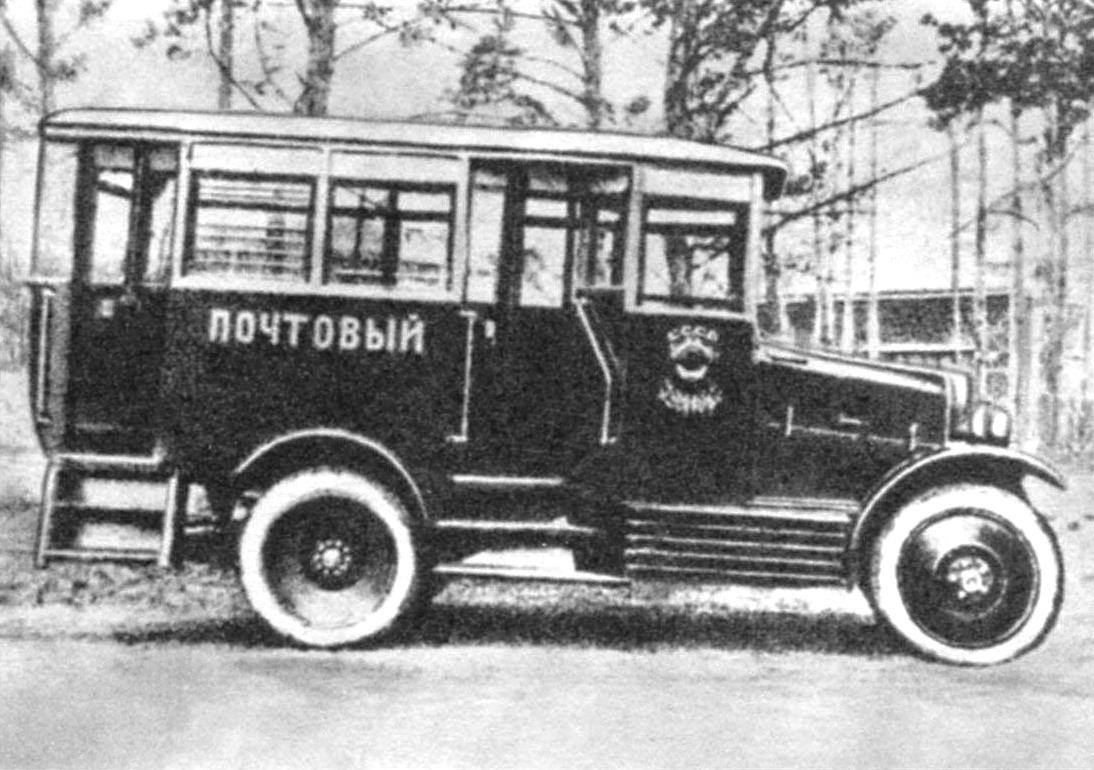 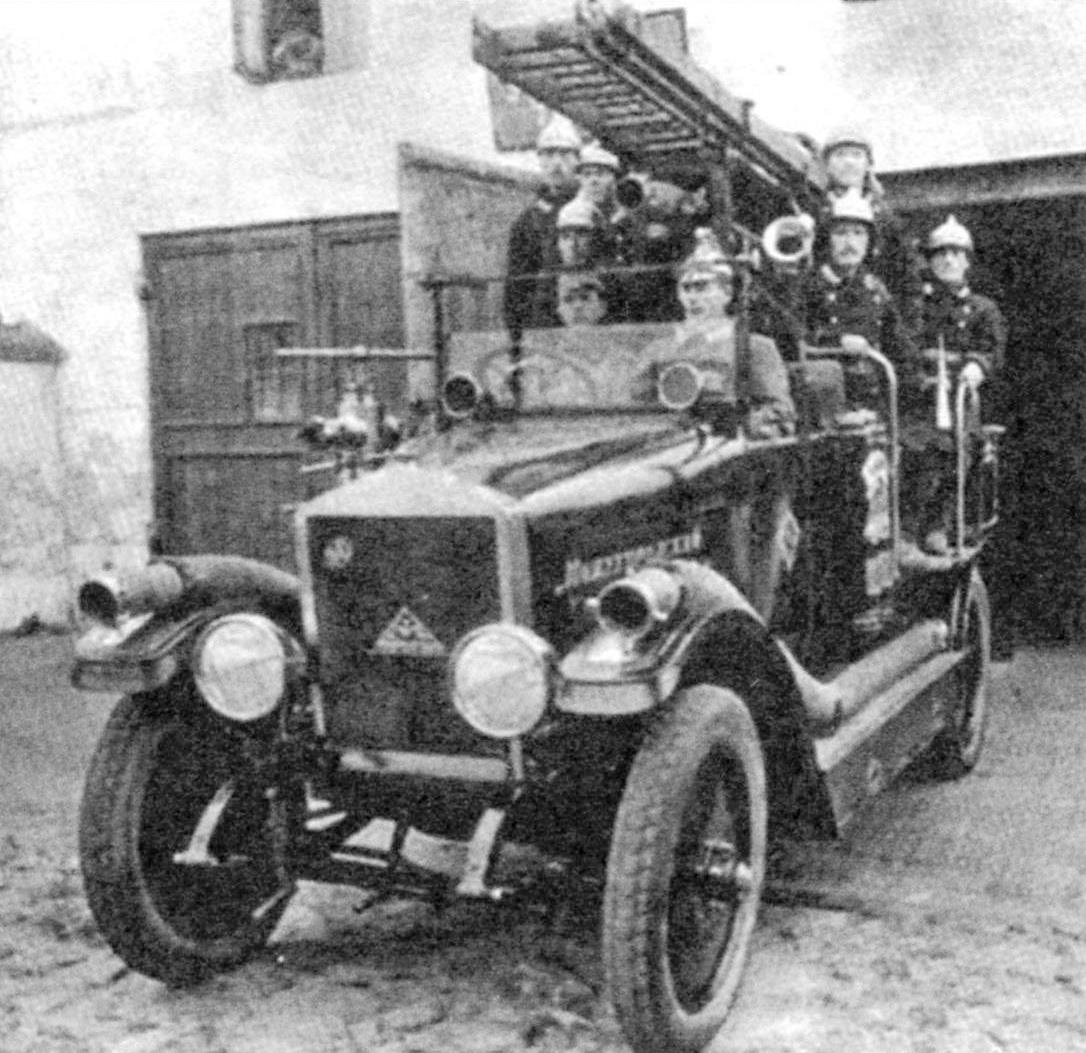 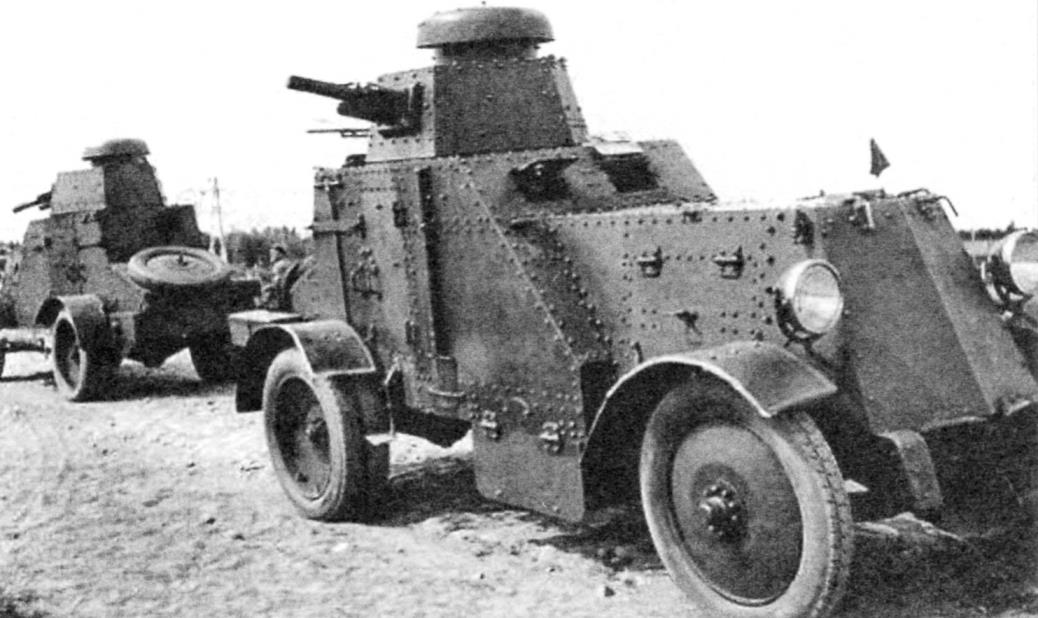 Armored cars BA-27 on the chassis of the AMO-F15, 1928
The driver is not left, as in modern machines, and on the right, with access through the single left door of the cab. In those years, RHD was considered more safe and convenient, because on the pavement was a lot more horse carts moving along the road, and pedestrians, off the sidewalk than oncoming cars. The door had no outside handle. To open it, had to stick your hand inside the cab (in the presence of a tarpaulin side cover – through the valve in it).
The platform is different from the modern small width boards, embossed wooden frames of the sides, curving loops and ferrules. On the left under the platform installed the tool box. All three sides folding.
The chassis frame is tilted forward noticeably. When drawing and making models it is convenient to consider the plane of the upper shelves of the frame is horizontal, and the main lines of the design (faces the radiator and the cabin, the bars and boards of the platform, etc.) – parallel or perpendicular to that plane. Axis also the front and rear wheels should be positioned respectively closer to or further from the upper surface of the frame.
Not shown are hidden by the trim outlines of engines, transmissions and other gear mechanisms, as they are the same as the car I-3.
The first ten cars of AMO, as already mentioned in the article, was painted in bright red, with white inscriptions. In the future, the color of the trucks were sasanatieng, gray, or beige. Machines for mail were stained in blue, and the buses in cherry with a light yellow top, cars in gray and khaki, and the top panel of the hood and edges of the sidewalls of the body was a darker shade. Wheels, frame, springs, axles and fenders on most cars were black. Upholstery – dark red leatherette, canopy made of grey tarpaulin. License plates on cars AMO was very simple, with large black figures on white background, no alpha index, since cars were few. It is best to write instead of the number with the year 1924. Signs mounted on the bracket above the left front fender and right under the body.
Y. DOLMATOVSKIY, L. SHUGUROV