One of the problems for the citizens-owners of vehicles is the condition of the batteries. Frequent stops on subsequent runs of the engine discharged battery, a full charge from an onboard generator is at best one hour. And, as experts say, only 90 percent of waste of electric capacity is restored quickly, for some ten or fifteen minutes. The line current is reduced, and further the charge is delayed.
Relay controllers usually work in switched mode, key mode. In addition, a sharp voltage spikes due to uneven load (turn signals, brake lights) drain a battery. The charging currents are already comparable to the loss on the bulbs. That is why skeptics claim that the generator of the car sometimes can not provide the battery a full charge.
Service batteries — not heavy, but long and tedious process, and constant lack of time do not allows you to maintain a full charge. To put the batteries on charge without control is also impossible. This leads to their premature failure. When recharging oxidized grid positive plates, and they begin to crumble. The result is a reduced working surface of the plates, and their fragments can cause a short circuit in banks.
However, many of the troubles associated with batteries can be avoided if I developed to get a universal charging apparatus. Home-made, fairly compact and reliable, it allows to automatically perform the control of the training cycle (CWC) measure the actual battery capacity in CYCLIC mode, and recharge mode (STANDBY) up to par automotive ST-60 or equivalent. When bolsaescola the battery just increases the required time of operation of the apparatus, capable of providing nominal charging current 3 A, maximum 5 A, discharge current up to 7 A. operating Mode — long. Nominal power consumption mode CHARGE — 180 watts max — 250 watts. In regimes of the DISCHARGE and the ATTENDANT capacity is only 36 watts.
The device includes a control unit with charging and discharge devices and watches. The control unit monitors the voltage better than the most diligent akkumulyatorschik, — charges to the necessary level, preventing a recharge. It automatically switches from charge to discharge when reaching the limit of battery voltage (10 or 14.5 V) and also in contralaterally cycle required at least twice a year, and in the standby (precharge if the voltage drops to 12.5—13). The operator simply connect the battery and select desired mode of operation. 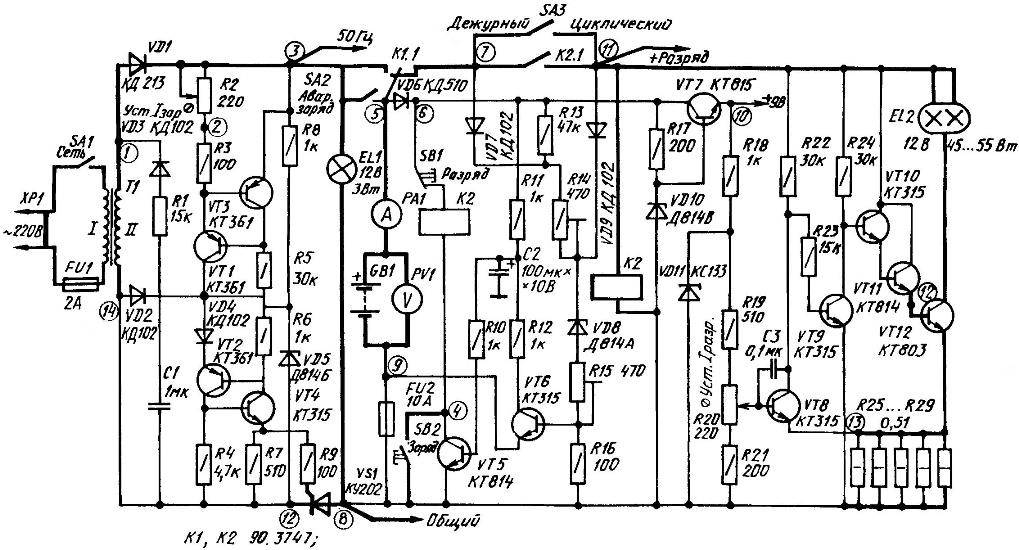 A circuit diagram of a universal apparatus for charging batteries (e-block hours is not shown)
The switch of the EMERGENCY CHARGING (SA2) include, if the terminal is less than 8 V and this voltage is not enough to trigger relay K1. While AS should be in a position ATTENDANT to the discharge device was in a disconnected state. Automatic operation is impossible, the requisite control voltage. Off the same SA2 when the 8-10 In at the battery terminals.
If relay K1 is already worked out, and the charging current does not drop to zero, switch AS to position the CYCLIC. The machine will go into automatic mode. If the current has fallen to zero, you will need to re-enable SA2 EMERGENCY CHARGE and after some time, repeat the steps outlined in the previous paragraph.
The switch SA3 determines the operation mode of the device: CYCLIC and CONVENIENCE. The first is carried out with closed contacts. With the switch SA3 in the second position, the loop will stop, but only after fully charging the battery.
During automatic operation, in other periods of the cycle is not interrupted. Already started the period of DISCHARGE is completed through the contacts of the relay K2 connected in parallel SA3. After the discharge relay K1 is switched to position CHARGE, de-energize discharge device and a relay K2. Contacts K2.1 will open.
After charging the battery, the relay K1 switches into the DISCHARGE mode, however, bit the unit is unplugged and the device goes into a state DUTY. In automatic mode, the transition from CYCLIC to standby, can last a day or more. It depends on the moment of switching DATABASES (phase cycle), the battery capacity and the established currents of charge and discharge. Relay K2 allows you to make a final or one-time measurement of the battery capacity automatically, without the need for constant monitoring of battery voltage.
The SB1 and SB2 enforce the DISCHARGE and, respectively, the CHARGE, if that is possible with the voltage at the battery. In particular, the first is fixed at a voltage less than 10 V, and the second — in excess of 14.5 V.
Voltage control allows the use of the transistor VT6, divider R13—R16, shunt diodes VD7, VD9 and Zener diode VD8. The latter increases the steepness of the switching threshold. Resistor R15 sets the lower (10-volt) threshold, and R14 — upper (14,5 V). With resistor R16 is removed, the bias voltage for VT6.
In the mode of DISCHARGE resistors R13, R14 shunted by a diode VD9. Leaking chain VD9VD8R15R16, electric current as the discharge of the battery will decrease and with it to decrease the bias voltage on R16.
Transistor VT6 remains open until voltage is 10 V (resistor R15). Closing this semiconductor opens the triode VT5, in the collector circuit of which is relay K1. Actuating, it disables the discharge device and the voltage at the anode VD9 disappears.
Earn chain R13R14VD8R15R16. Added resistors R13R14 will further reduce the current through the divider, and VT6 is fully closed.
As the battery is charging (around 14) when the voltage on the base of VT6 closer to the operating point, its negative impact will start to show the charging pulses. They will exceed the upper threshold, VT6 — to strengthen their amplitude. The transistor VT7 is closed at the time of the charging pulse, the consequence may be a contact bounce of the relay.
To prevent this undesirable phenomenon, the VT6 emitter connected directly to the negative battery terminal and not to GND. Having the amplitude to 0.7 V, the charging pulses allocated to FU2, to counteract the effects of all that stands out in R16 (0,1—0,3). Finally the capacitor C3 smooths out the ripple voltage, excluding contact bounce. 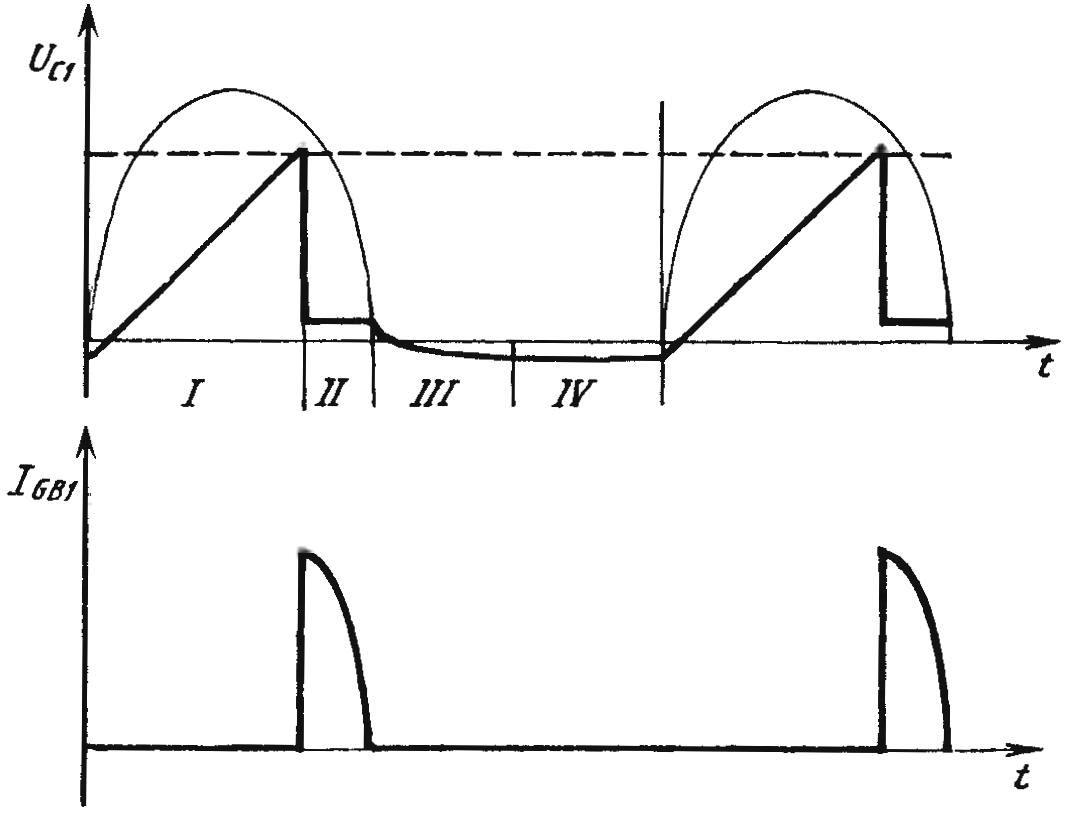