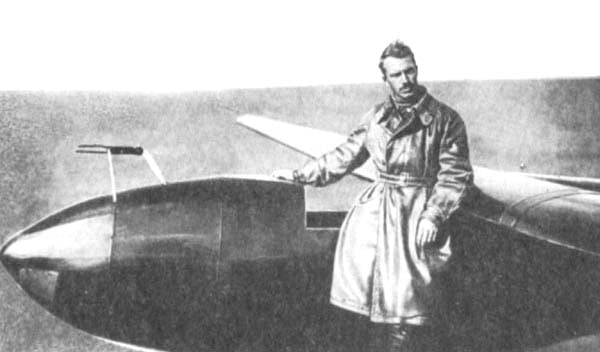 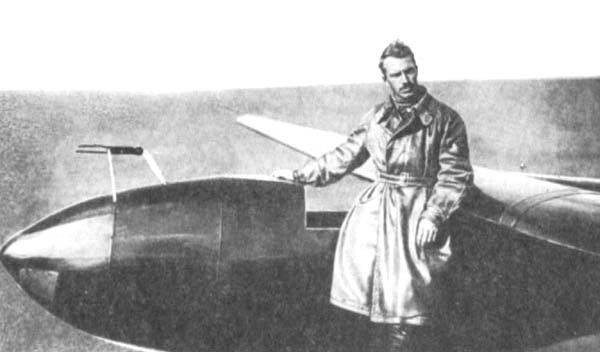 Glider is a single cantilever monoplane with upper wing. The fuselage is pear-shaped, oval cross section, is formed by 15 frames, has two spars (top and bottom) a cross section of 10X10 mm and four stringer 10X5 mm, running along the entire length. The bottom has a landing ski of the two rails and strips of plywood, covered with duralumin. The entire frame of the fuselage is covered with plywood with a thickness of 1 mm, and a place where fixed wing, with a thickness of 2 mm.
The cabin is equipped with normal pedals and control stick. Seat — wooden, for .flying with a parachute, the instrument panel has a speed indicator, and on the nose of the fuselage, the top sensor is installed.
Cut the cabin top closed by a removable cap made of aluminum with a celluloid glass. The flights were carried out both with him and without a cap. The cabin and headrest upholstered in leatherette. The tail part of the fuselage ended in a removable cone made of plywood.
Wing — two-spar consists of a center section and assembled together with the fuselage and two detachable consoles. The center section is sheathed with plywood, the console to the rear spar is also plywood with a thickness of 2 mm, the remainder — leaf. Mounts consoles — steel, welded. The airfoil TSAGI series And with relative thickness of 18%. 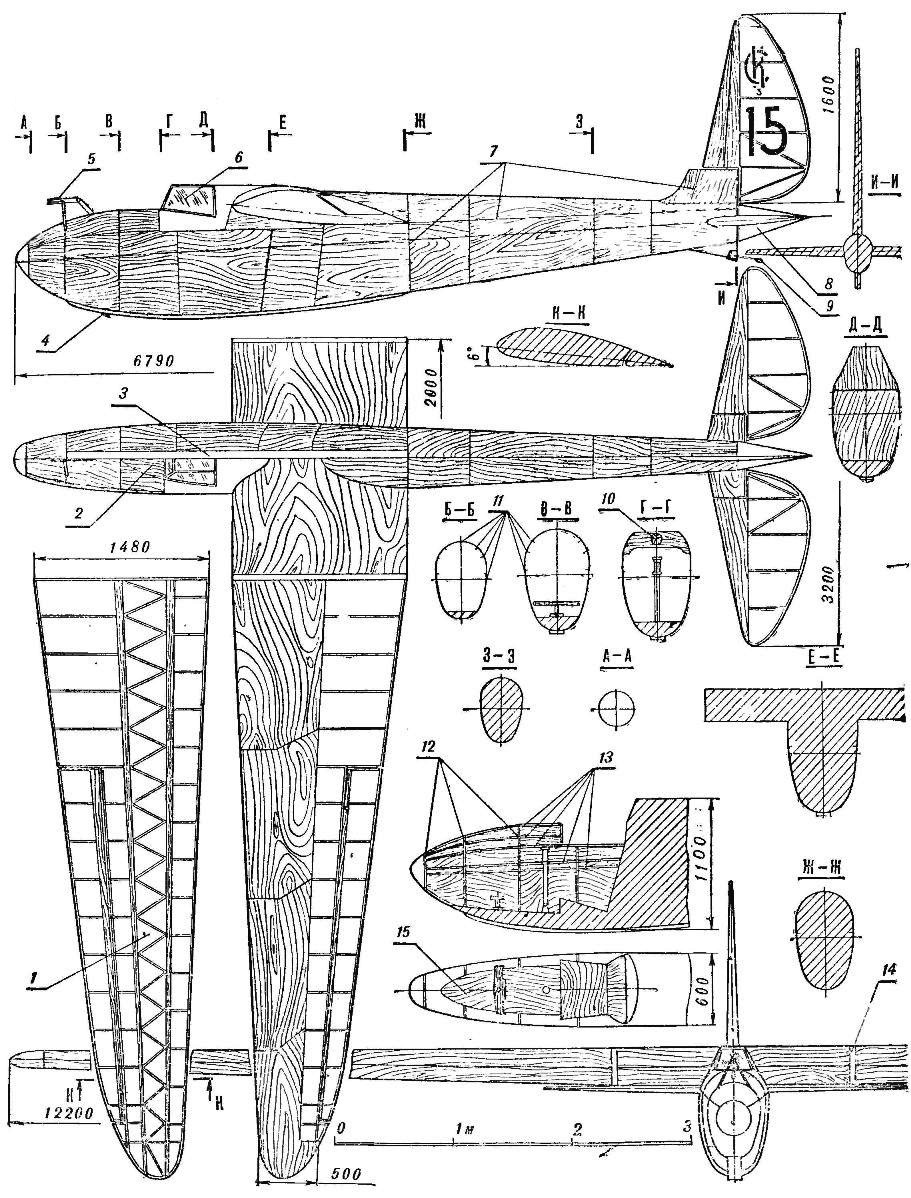 Glider SC-3:
1 — skeleton of the wing without skin, 2 — flat surface of the fuselage, a 3 landing ski, 4 — hook for running (starting), B — Pitot (for airspeed indicator), 6 — celluloid lantern detachable fairing cab, 7 — cutting of the fuselage skin and keel, 8 removable cone of the fuselage, 9 — start the ring on a cable, 10 — speed indicator on the dashboard, 11, 13 stringers, 12 frames, 14 — slit tape, 15 — cabin floor.
Tail — free-support. Stabilizer and fin tightly joined to the fuselage and entirely sheathed with plywood. The Elevator was initially precompensator, then the compensator was cut. The nose of the elevators and turn to spar sheathed with plywood, the rest is cloth.
The whole plywood part of the airframe painted in a cherry color, and a linen — covered with colourless nitrocellulose lacquer. Marks SC-3, No. 15 — black. On the 8th rally of glider in 1932 glider on the rudder had starting number 17.
TECHNICAL DATA:
The wing span of 12.2 m, a wing area of 12.4 m2, elongation of wing 12, the wing setting angle is 6°, the length of the glider of 6.79 m, the area of the horizontal operana — 1.6 m2, the area of the vertical stabilizer — 0.85 m2, airframe weight — 189 kg, flying weight — 270 kg — 20.
S. DEMIN