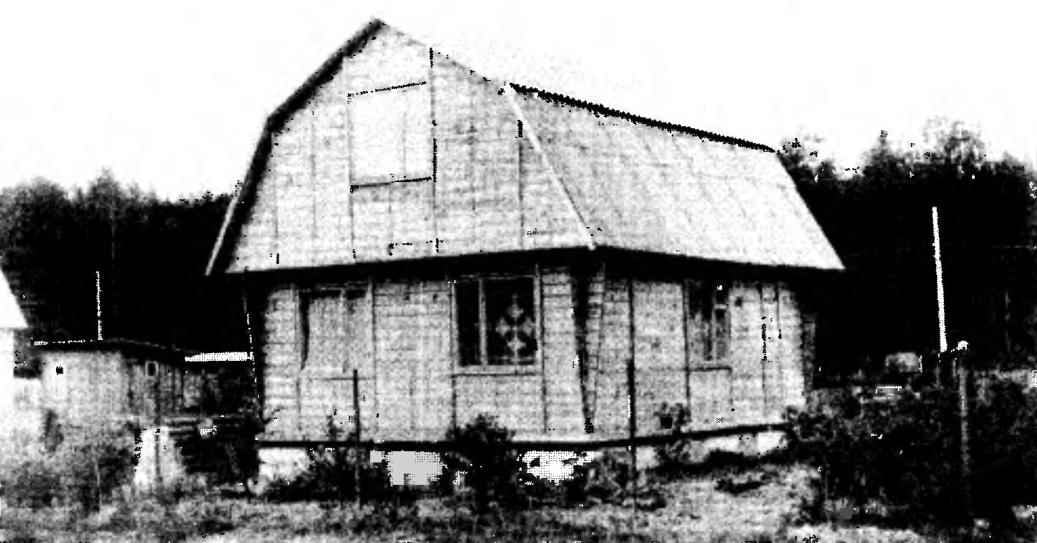 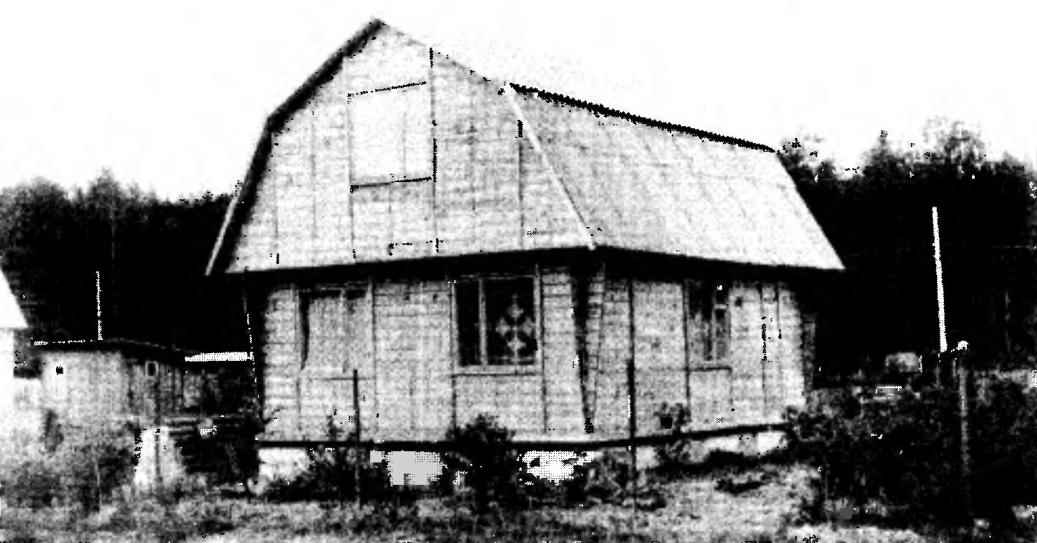 The desire to build the house occurred to me simultaneously with the receipt in the middle of 1980-ies of land— coveted six acres. Problem how to build a house: brick or wood— it was not. Brick and concrete walls rather tired and in town. Naturally, the choice fell on the hardwood. Only here what type to prefer: chopped (log, Brusova) or panel-frame— this question remained open. All agreed the case.

Time for individual developers was not the best— even the nails were a scarce commodity.

Studying the situation with “offers” for the timber (i.e. just for them), I was one of the construction markets, where stood the KAMAZ, loaded literally the roof of the select boards-“sorokovka” with a length of 6 m. the Price suited me, and the driver agreed to deliver the material directly to the construction site.

These boards determined the design of the house. And although his project was doing then one day, alleged the design of the walls and force elements were born there in the market. In the end, designed the house became a combination of both the above mentioned types of wooden housing construction: chopped and-frame.

The architecture of the house, traditional garden buildings, almost typical, as was required by rules of suburban development of the time, without any frills.

But I couldn’t resist in order not to make the design something of their own, and not because I wanted to highlight the house among those around him “brothers” and to make it more liveable. 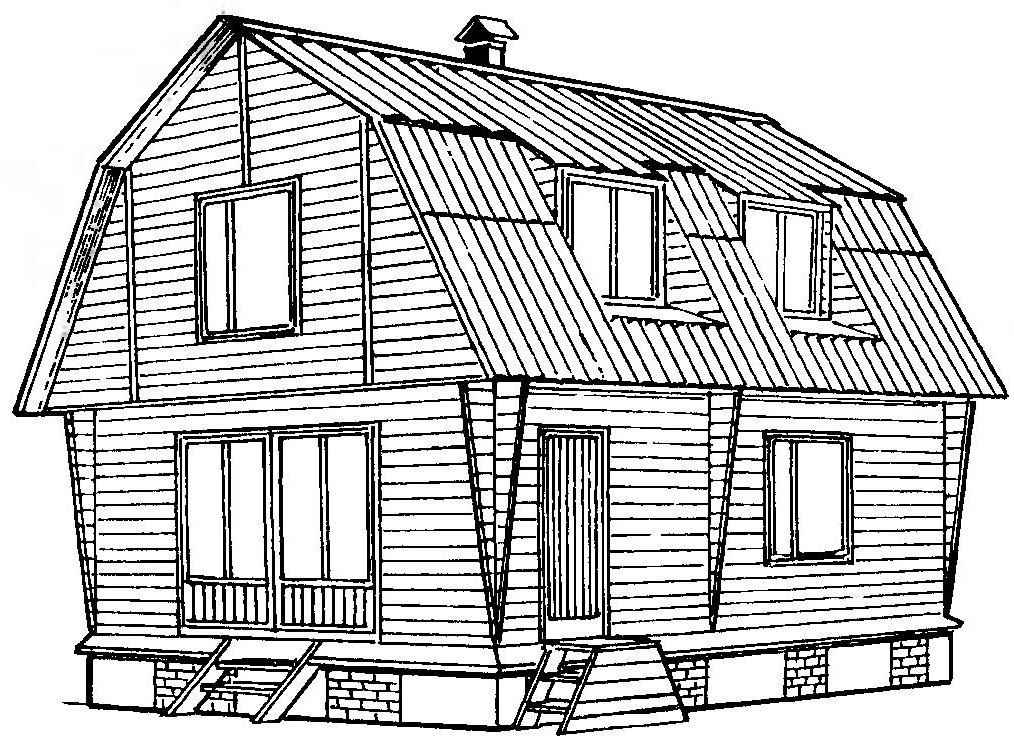 General view of the house (draft) 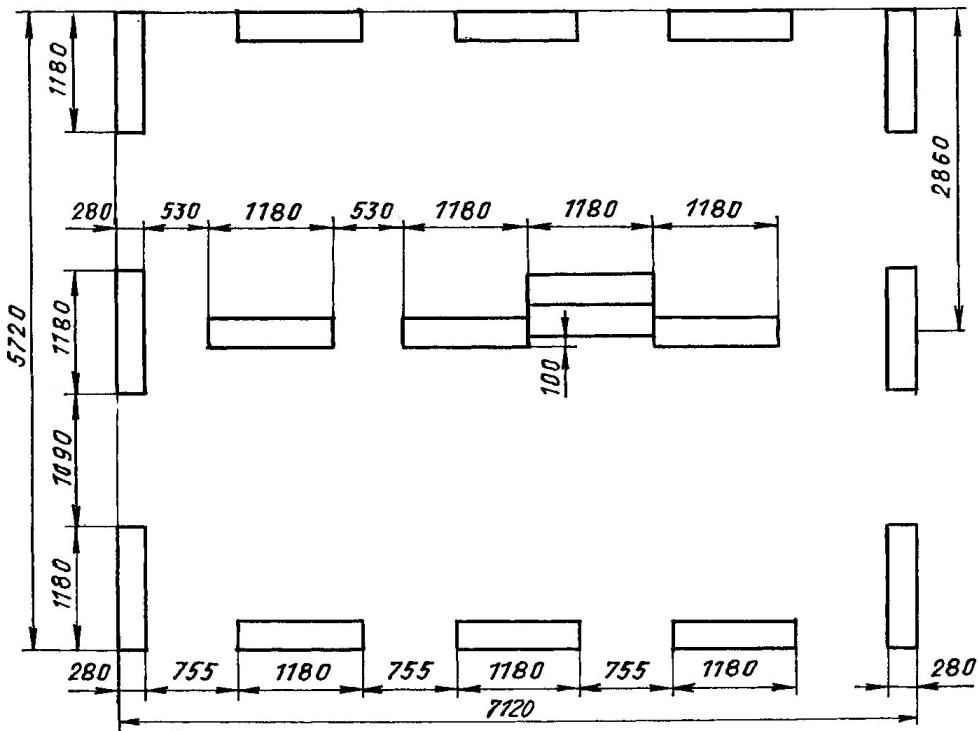 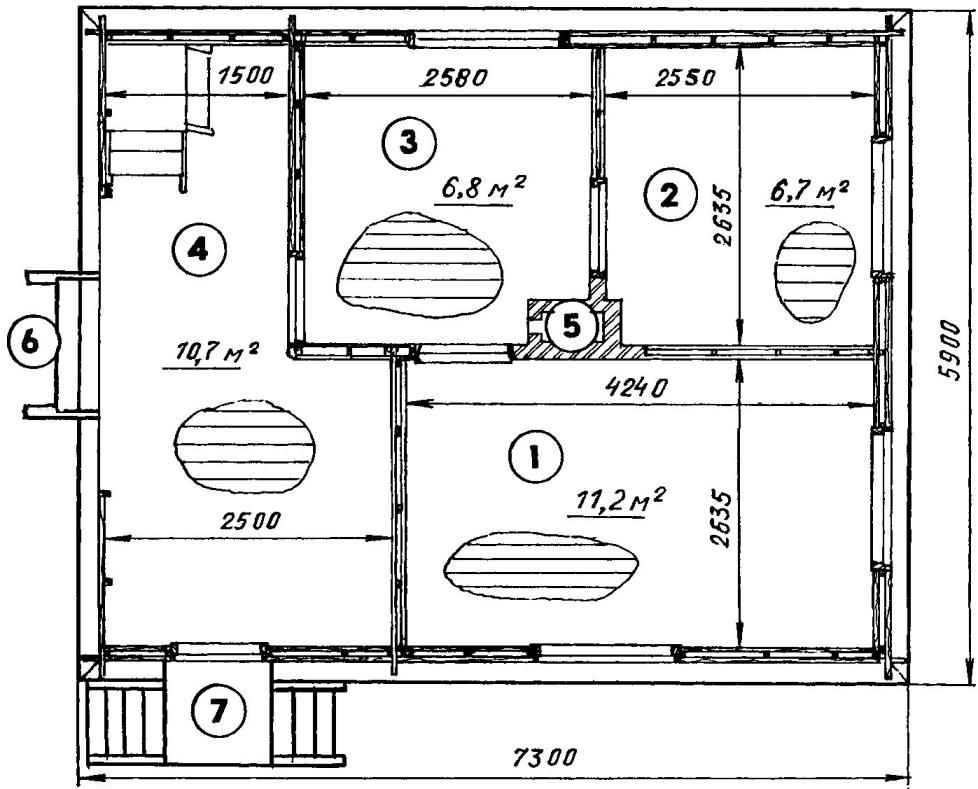 Because the house is one storey and the dimensions are small (on the outside walls 7×5,6 meters), for more square I have designed the loft, and her “square” has increased through the console editions, girders, main floor, and “cubic capacity” —due to the “broken” roof. That attic looked normal has a loft made large Windows, the same as in the house. Not only the Gables, but to increase the illumination of the upper space and improve visibility of the surrounding landscape—and even in the lower slope of the roof.

But the roof window was not liked by the officials from the local administration (according to them, it was out of line), and I was asked to close their roof that had to be done.

Another feature is the veranda, or rather, its wide doors-Windows. They are made extensible, so that through them it was convenient to make lengthy materials for interior finishing in the construction. Now, when the house was built, these Windows and doors allow you to transform a closed porch to an open terrace.

The layout of the house is also traditional, rational. On the first level deck with stairs leading to the loft; kitchen, bedroom, living room. Attic —two rooms for guests. The stove was designed in the center of the house—she alone can heat all the rooms as downstairs and upstairs.

The Foundation of the house. Choosing the type, I proceeded rather from practical considerations, though took into account the economic aspects. Subsurface soil at the site is a dry loam. Groundwater at a depth of 2.5 m and more. So I decided to make a slightly deepened Foundation. Pier Foundation, of course, the most economical, but time consuming. So I chose a compromise— “Pawlenty” of prefabricated concrete blocks with dimensions 1180х580х 280 mm (length x height x width) laid on sand cushion. The main conditions— leveling the surface of blocks in the same horizontal plane and ensure the Squareness of their placement in the plan. The first condition provided with water level, the second alignment position of the corner blocks on the diagonals.

Then laid on the surface of the blocks 3 layers of roofing material, on them— harness made of boards section 150×40 mm. 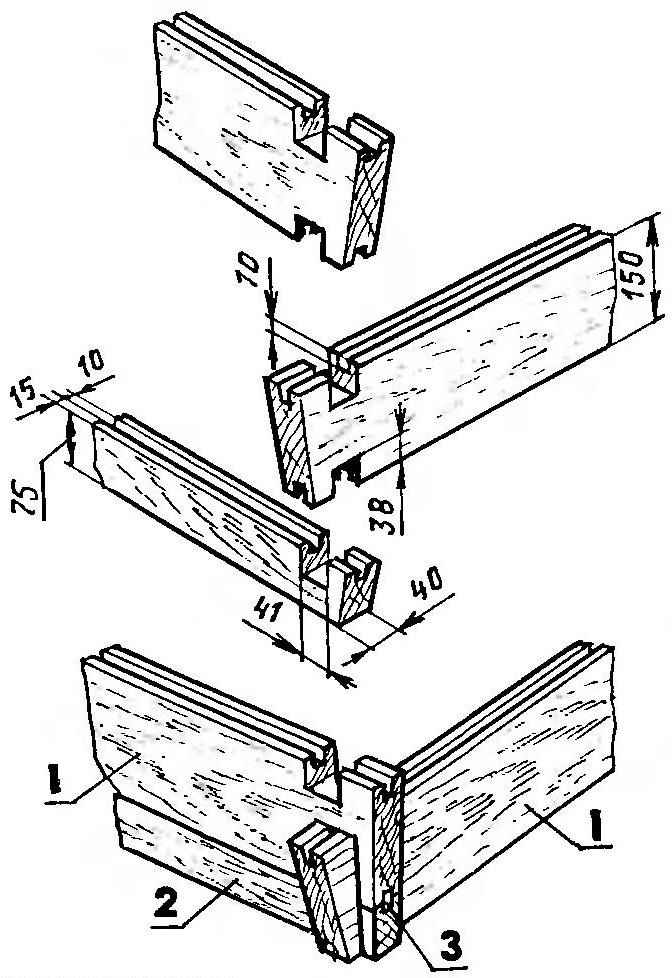 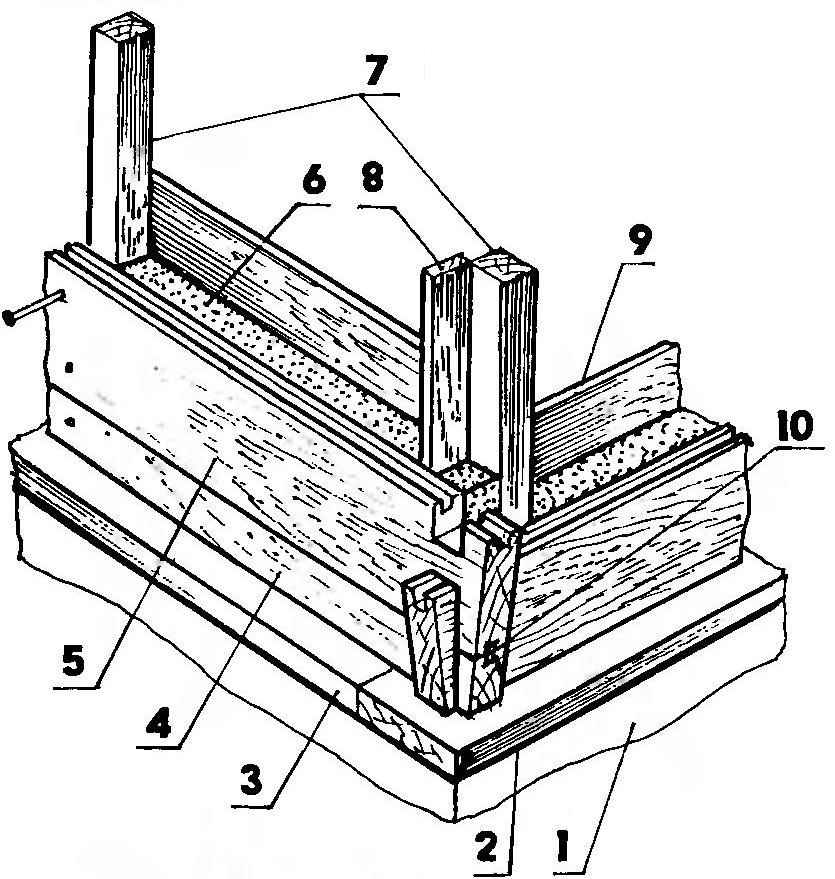 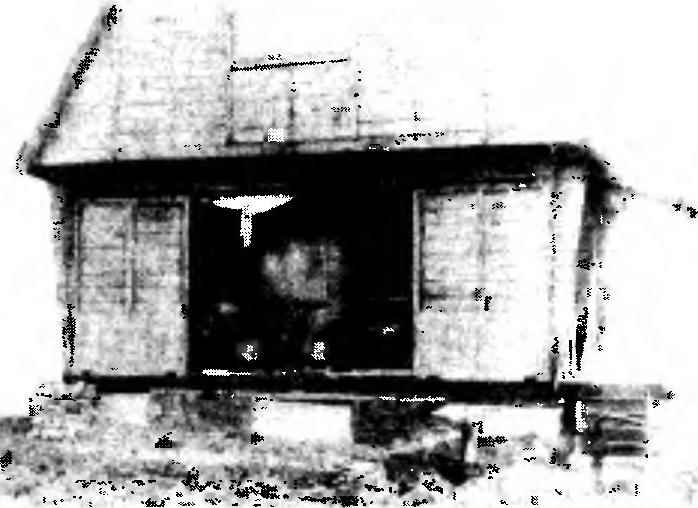 The walls of the house are not quite normal. And although their design came to me as a revelation when purchasing the lumber, but on some of the features of its components and parts, however, had to break down. The combination of chopped and-frame types in one design has its positive side. Wall of the building— exterior and interior— designed self-supporting as log cabins. And although their boards are attached to the frame uprights, the load on them does not create, but on the contrary, part of it (the load) from the upstream structures assume.

In appearance the walls of the house remind the chopped in a bowl with the rest. Remains also not standard— if the lower-crown they are very small, probables from crown to crown in the upper row, they make 350-mm releases under the Gables and more than 600 mm console under the eaves of the roof.

The cavity between the outer and inner facings of the walls filled with insulating material— foam construction.

The distance between the inner and outer wall— depending on existing insulation to be provided teplopotreblenija.

Long koroblenie covering boards cut to specific lengths and assembled when mounted on the racks. Outside joints are closed vertical slats.

Inside the walls are decorated with “ennobled” hardboard with the film “under the tree”. 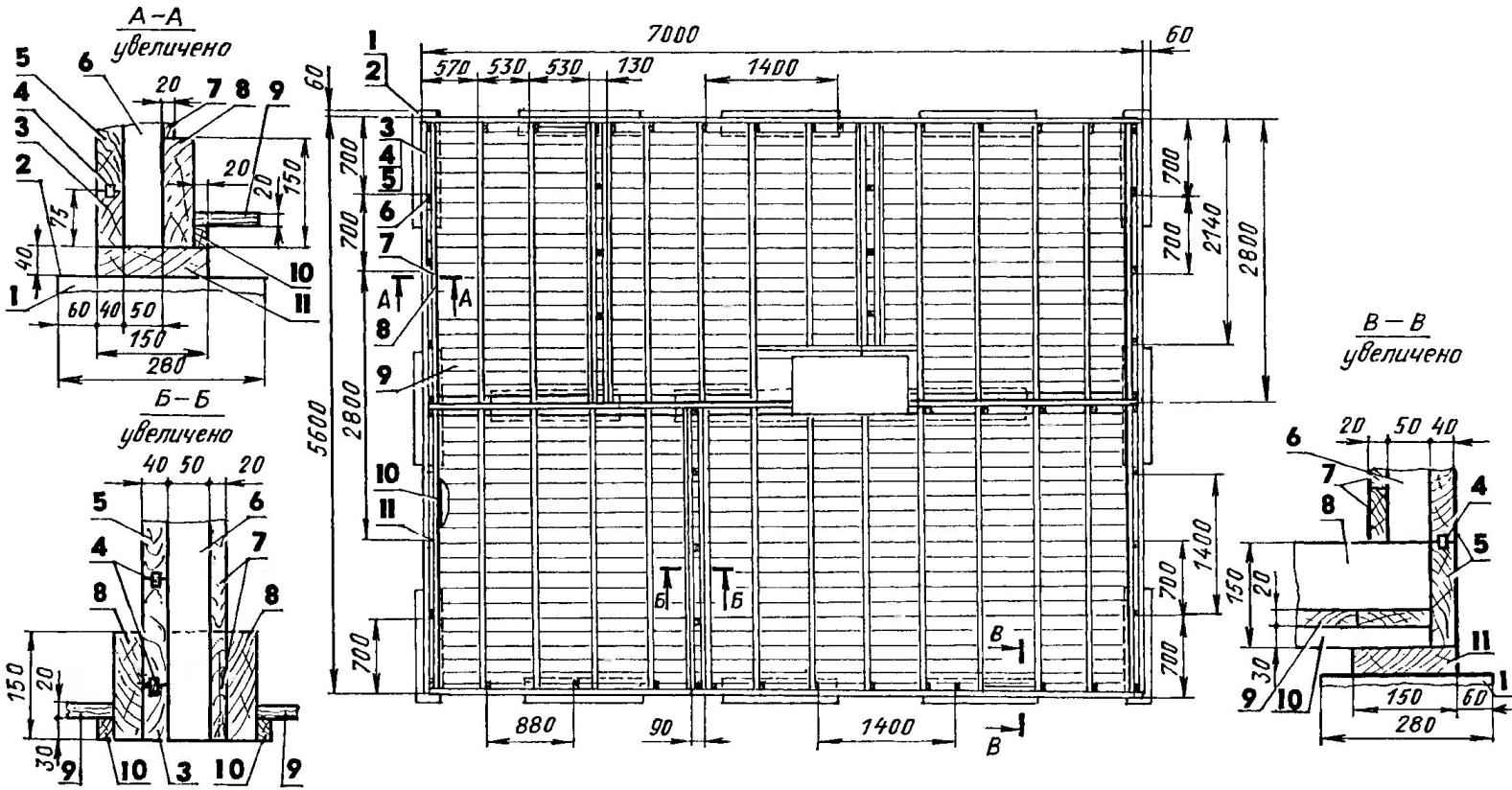 Plan beam-lag floor of the lower level (shown Board subfloor): 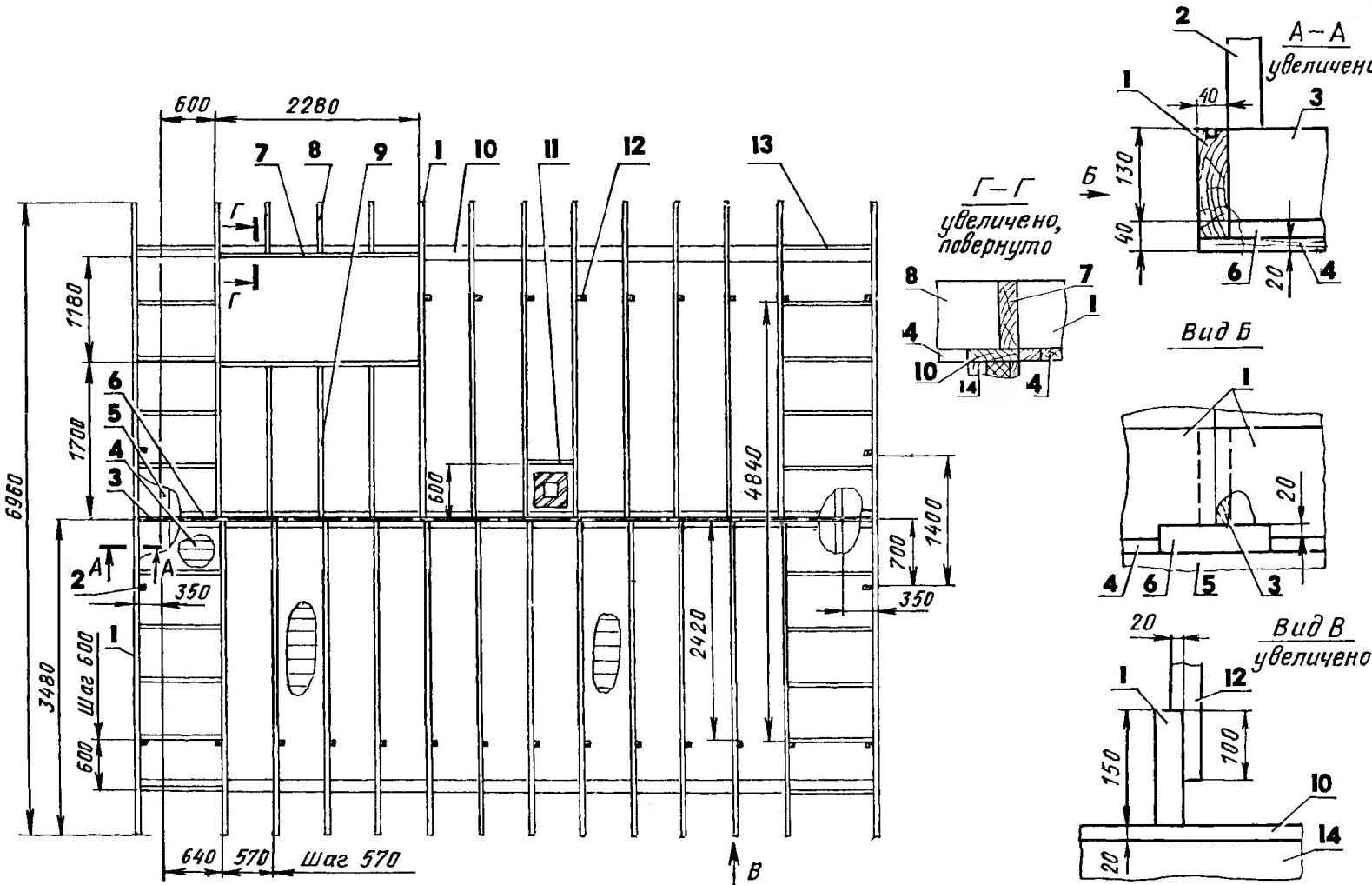 The roof of the house— the attic, or as it still name, “broken”; has two slope of ramps: the top is about 50 degrees lower — around 30 degrees. Accordingly, each truss leg made of two tribes. The tribe joined in a single unit together with the uprights and crossbars of the frame of the attic. At the bottom of the rafter feet rest on floor beams, and at the top connected to each other before. Parts of the rafters is made of the Board-“the forty.” Collecting the first (gable) truss form, used it as a template for making others. All rafters combined into a single spatial design ridge beams and planks of a continuous sheathing of boards-“twenty”. Solid it is made to provide additional insulation. On top of the crates stacked windscreen of roofing, with slate roofing.

Attic— the space special, especially in a suburban house, it is necessary to insulate not only the sides but also from above. And not so much from the cold but from the sun. Here, the insulating material used construction foam thickness of 50 mm. Its the same for absorption laid in the ceiling between the ceiling of the main floor and the floor of the upper level. But the insulation of the floor of the lower level arranged of plain chips, which I collected after planing boards in excess. Mixing it with a lime-pushonkoj, it was laid between the joists-the joists on the subfloor and covered with boards”sorokovka” clean the floor.

Porch left non-insulated, as this room is still summer, especially because it is primarily used as an outdoor terrace. 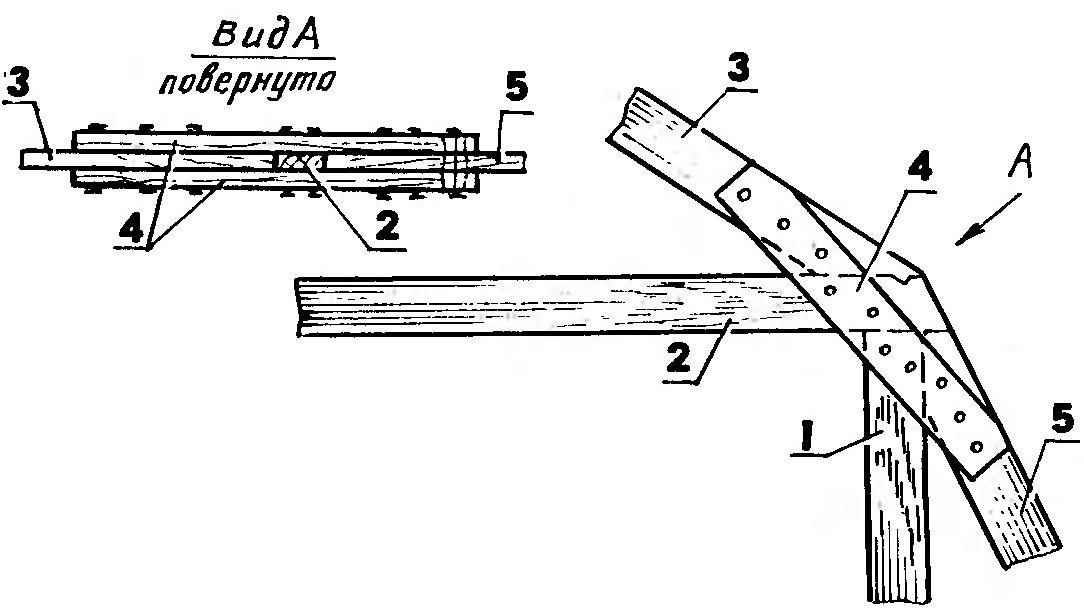 The connection joint of the rafters and frame of the attic (all parts made of boards section 150×40): 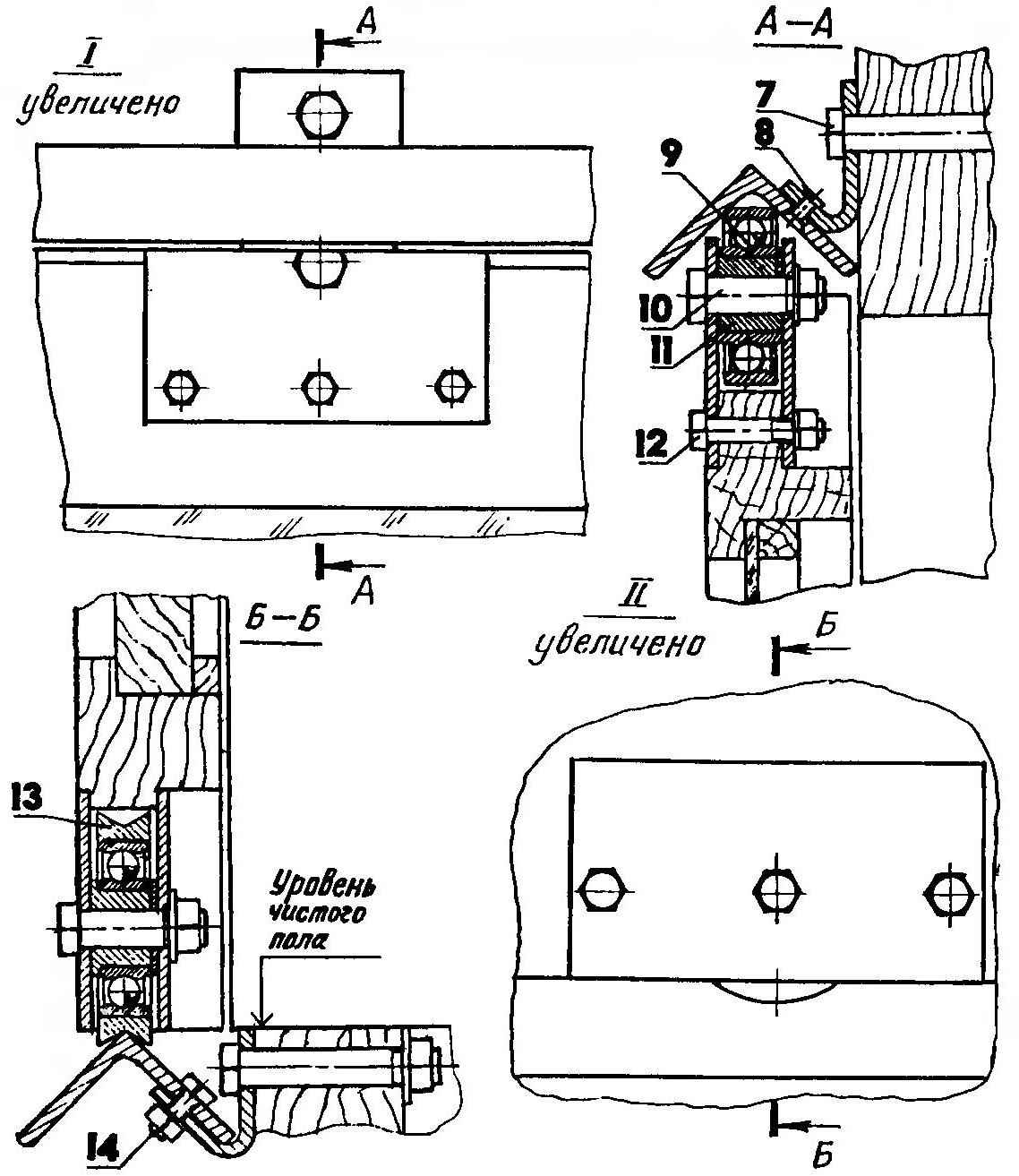 The mechanism of the rollback of doors: 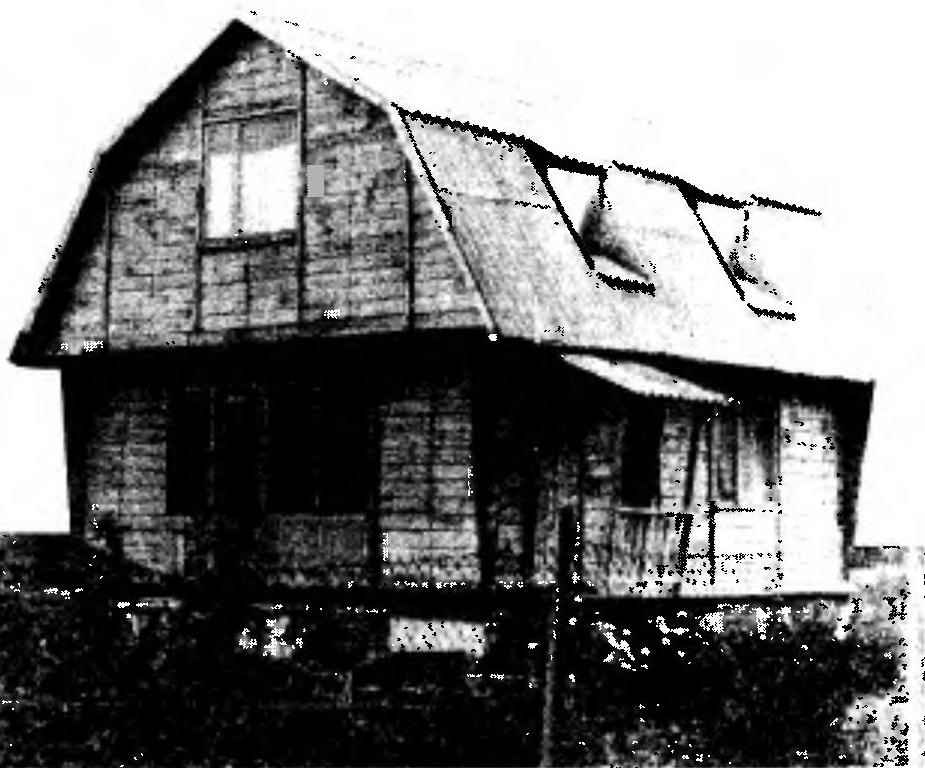 View of the house from the street

Stairs mounted in the corner of the veranda. Maybe the transition from layer to layer in the cold season is not very pleasant, because this part of the house is not heated, but it saves the area in the rooms. For safety ladder is made with a stop —short of the lower marsh, and the intermediate area. The main marsh is set perpendicular to the bottom (in the background), but rather at an angle of about 100 degrees. This unusual twist happened because the main marsh with increasing height moving away from the wall. This is done for convenience so that the slope of the roof does not interfere with access to the attic. With the same purpose in the overlap cut is not LAZ. a fairly large opening. Details of the stairs are mostly made of the same boards-“sorokovik”, and exterior paneling.

Front porch and attached, with steps on two opposite sides. Above it is mounted the canopy, which is supported by inclined struts. Tilt their the same as the bevel “residues”editions of the walls.

There is still a side porch-planking, which is under the sliding Windows-doors porches.

On this “scale” Stroymontazh has been completed, but work continued on the improvement and decoration of the house. But that is another topic. I hope at least something from my experience will be useful to those who would build a house with his own hands.