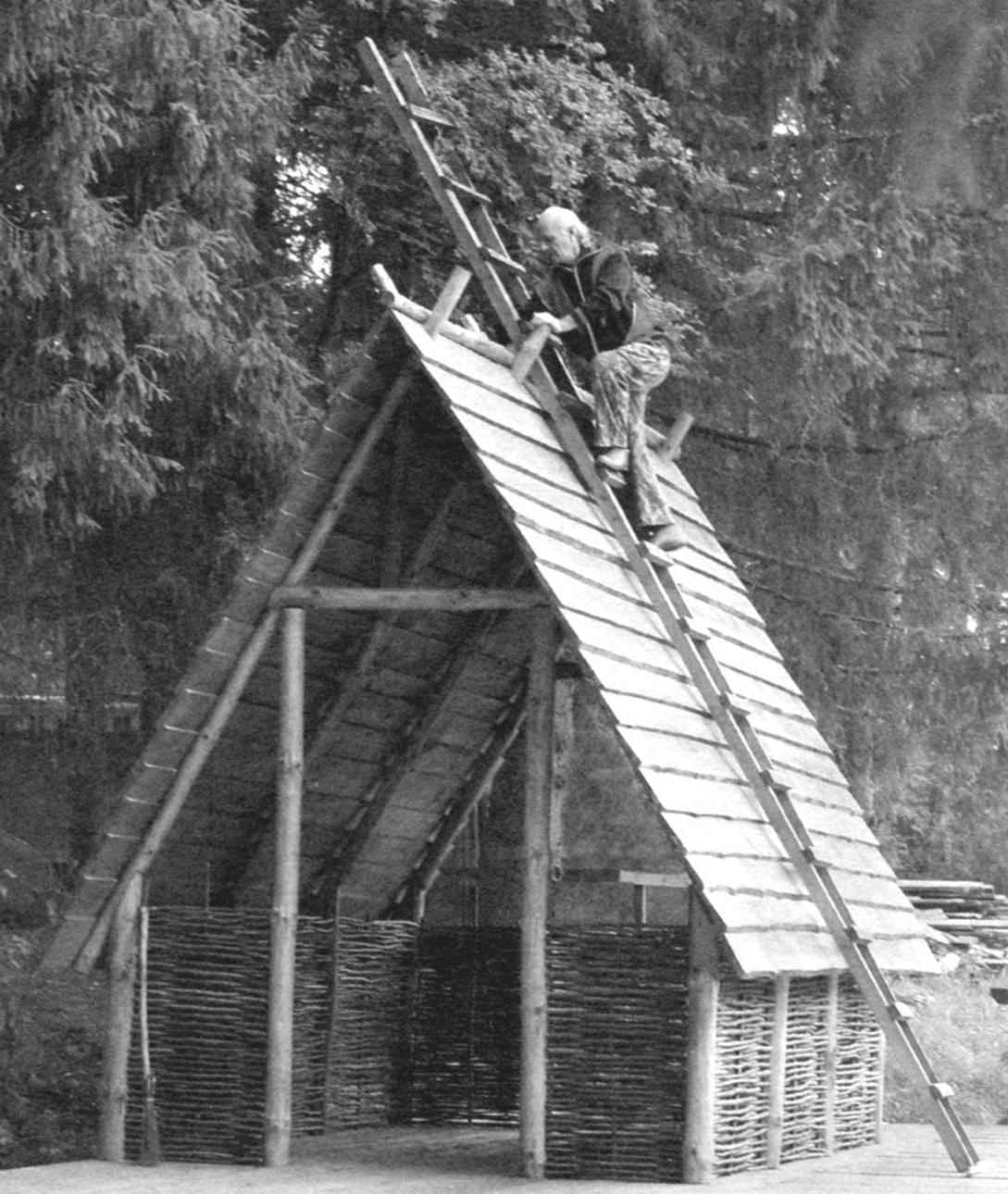 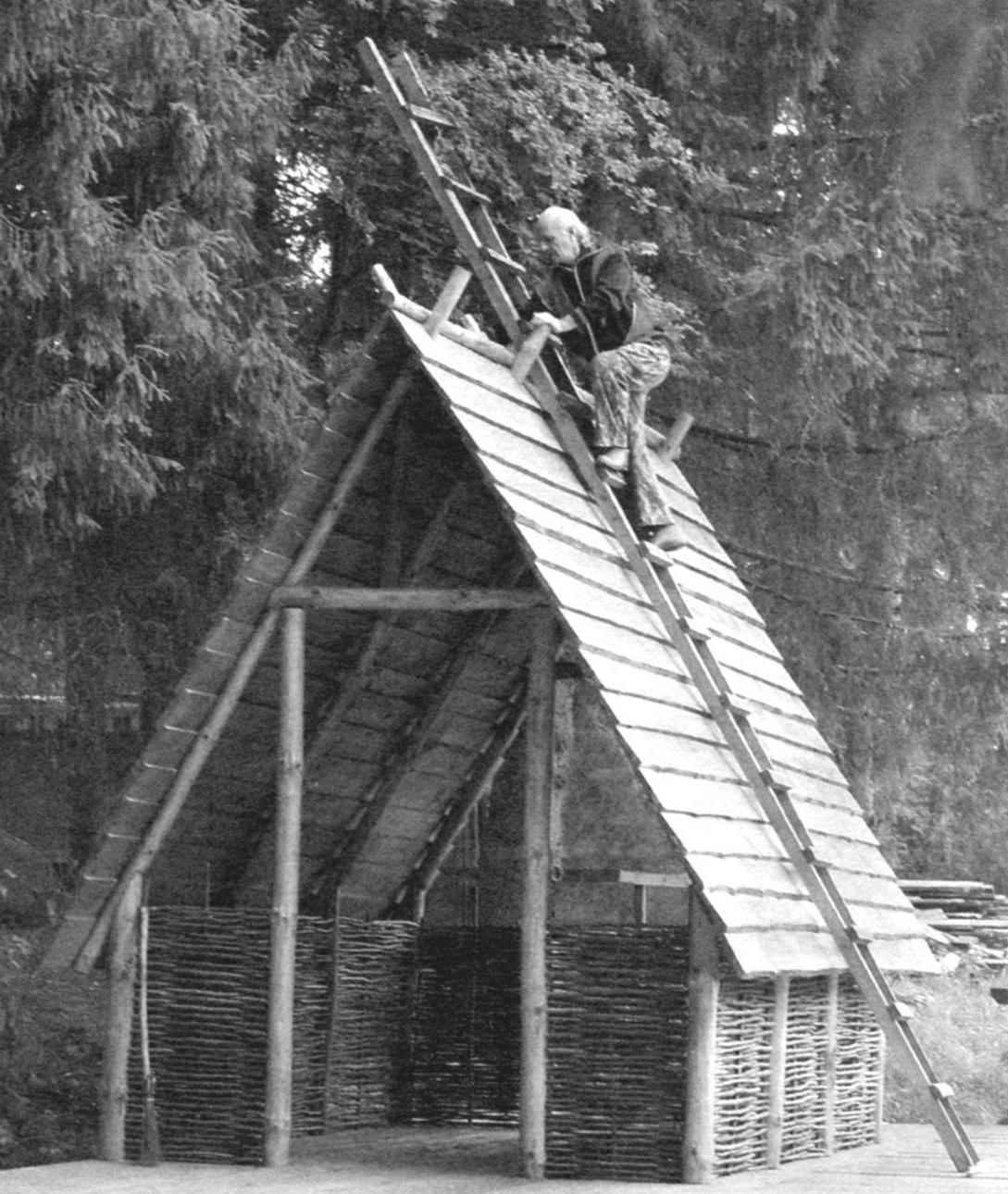 In the folk tale “the Fox, the hare and the rooster” says: “Fox has built himself a hut of ice from snow and ice, and honey – bast, of sturdy twigs Yes dostochek…”.

However, although there are true tales, but the hare could not build such a material for the entire house, because the phloem is bark. According to the ancient dictionary – “podgorje, Spodnja tree bark, covering oblong”. But really, the Luba went to Russia not only for bast bast Yes – they are covered and roofs of houses.

But from “twigs and dostochek” it would be possible to build a house. Sharp-witted handyman, if desired, easily build a wooden house, a cottage, however, from larger parts – poles, fell ill and boards.

The basis of such construction can serve as a floor (7) or just the land. If you put the decking, selected durable unedged Board thickness 15-20 mm or even slabs. However, they should be the same width, with the gouging sharp edges, soon, usually, “salamakinas” and become useless. All wood must be primed and then cover the outside with oil paint in two layers. Flooring it is better to lift on laid on the ground transverse slegh or logs. Stand tent sewn to the decking nails.

When the earthen floor platform is closely aligned. In this case, the rack further into the ground by approximately 500 mm, While their bottom ends must be char on the fire or wrap with roofing felt, film. 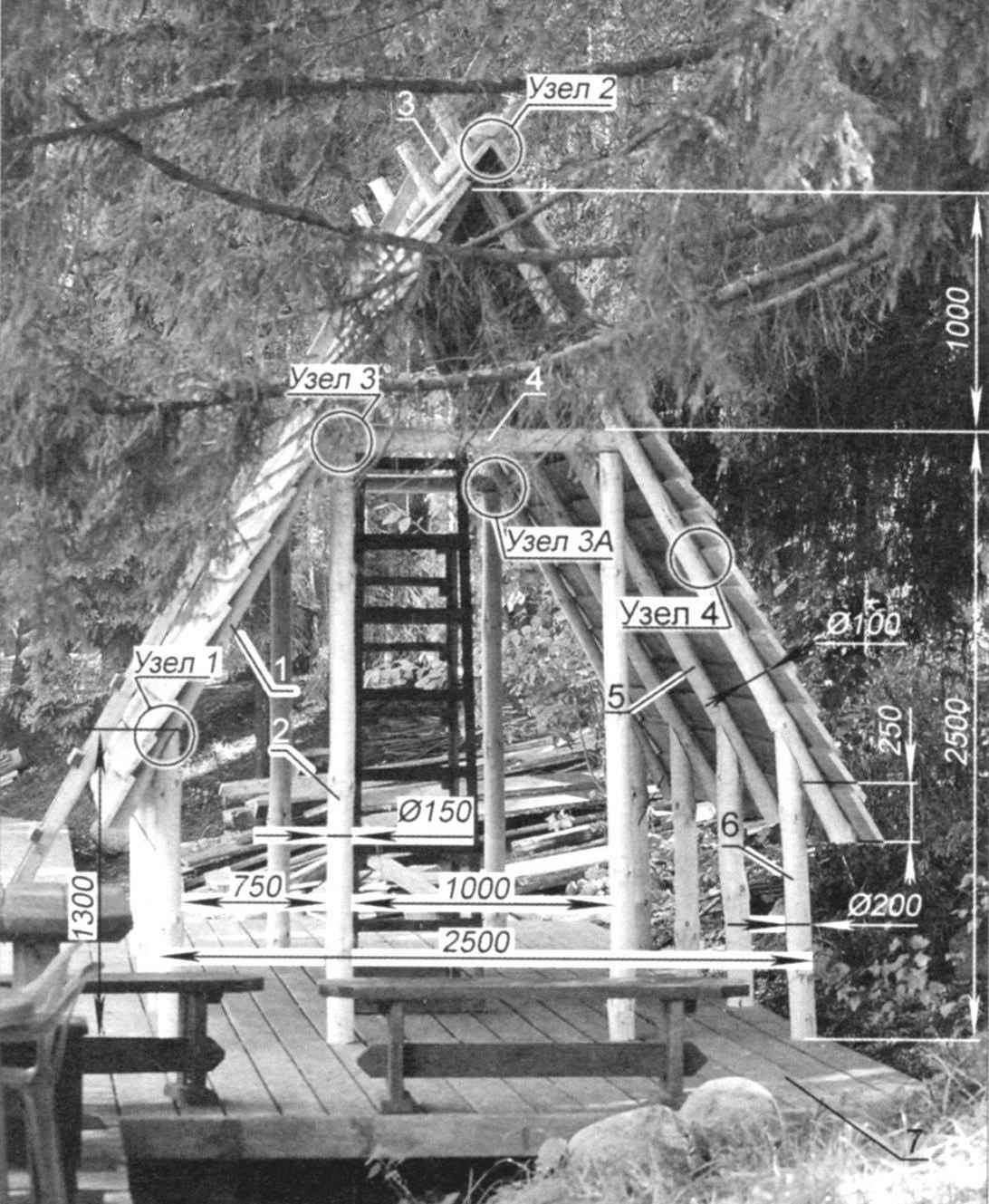 The Assembly of the tent: 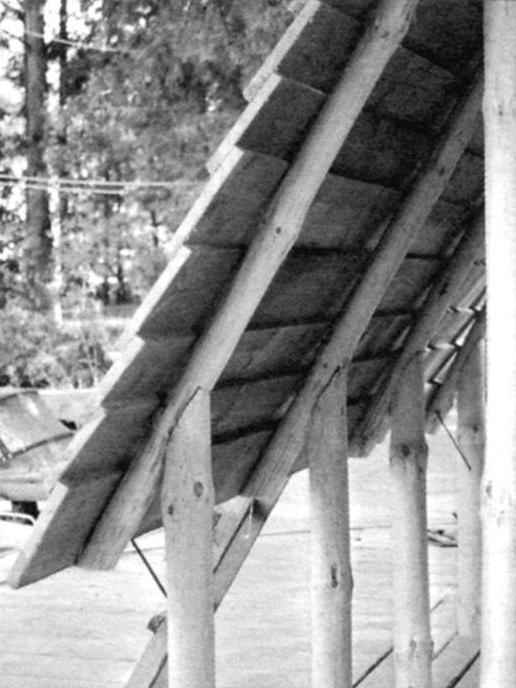 The connection of Bokova struts with rafters slanting prirub 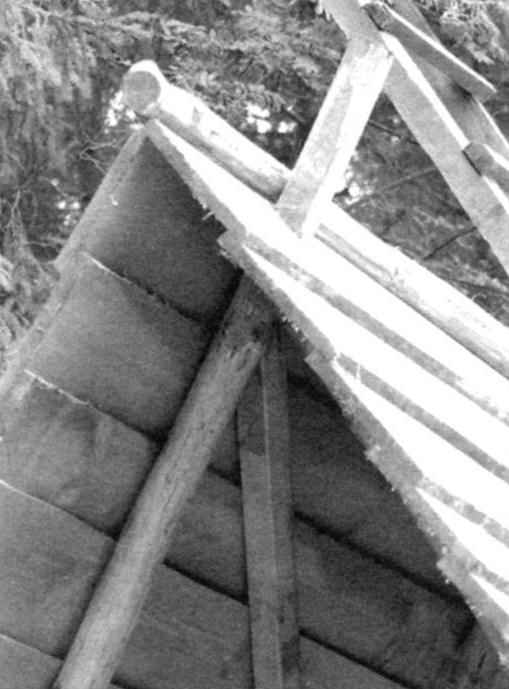 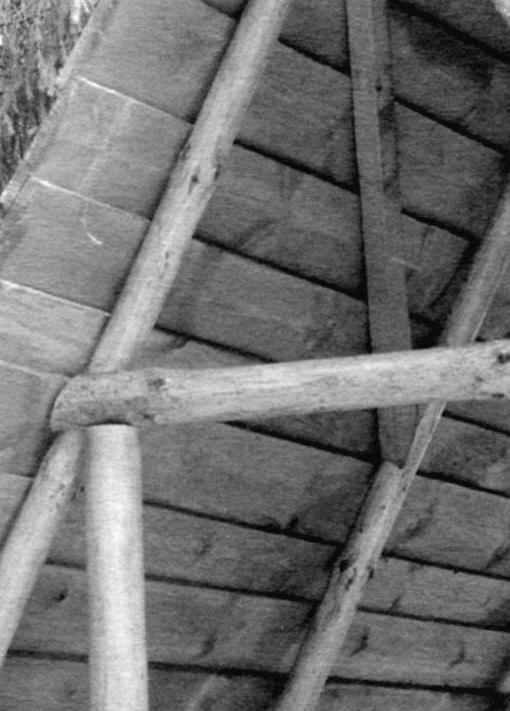 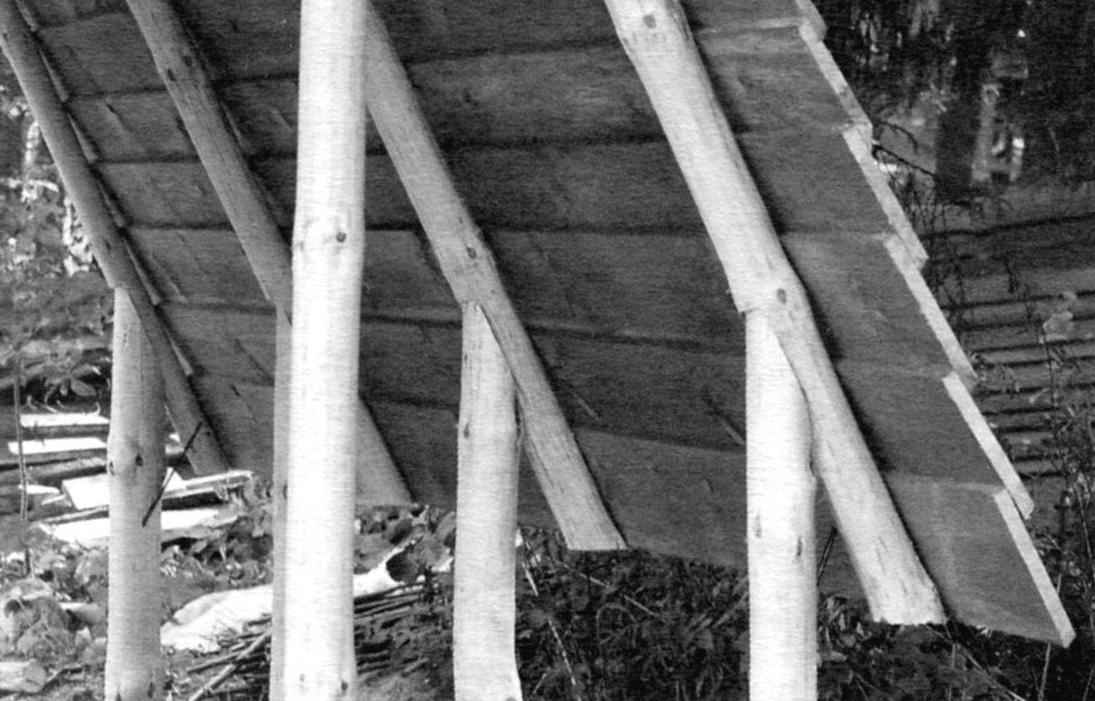 The top boards of the roof cover for the underlying 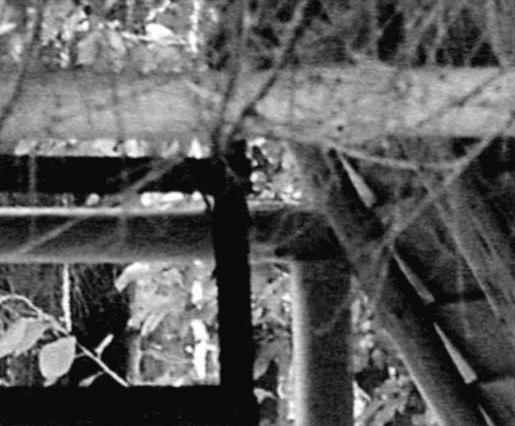 Mount the main landing with high foot section (inside view) 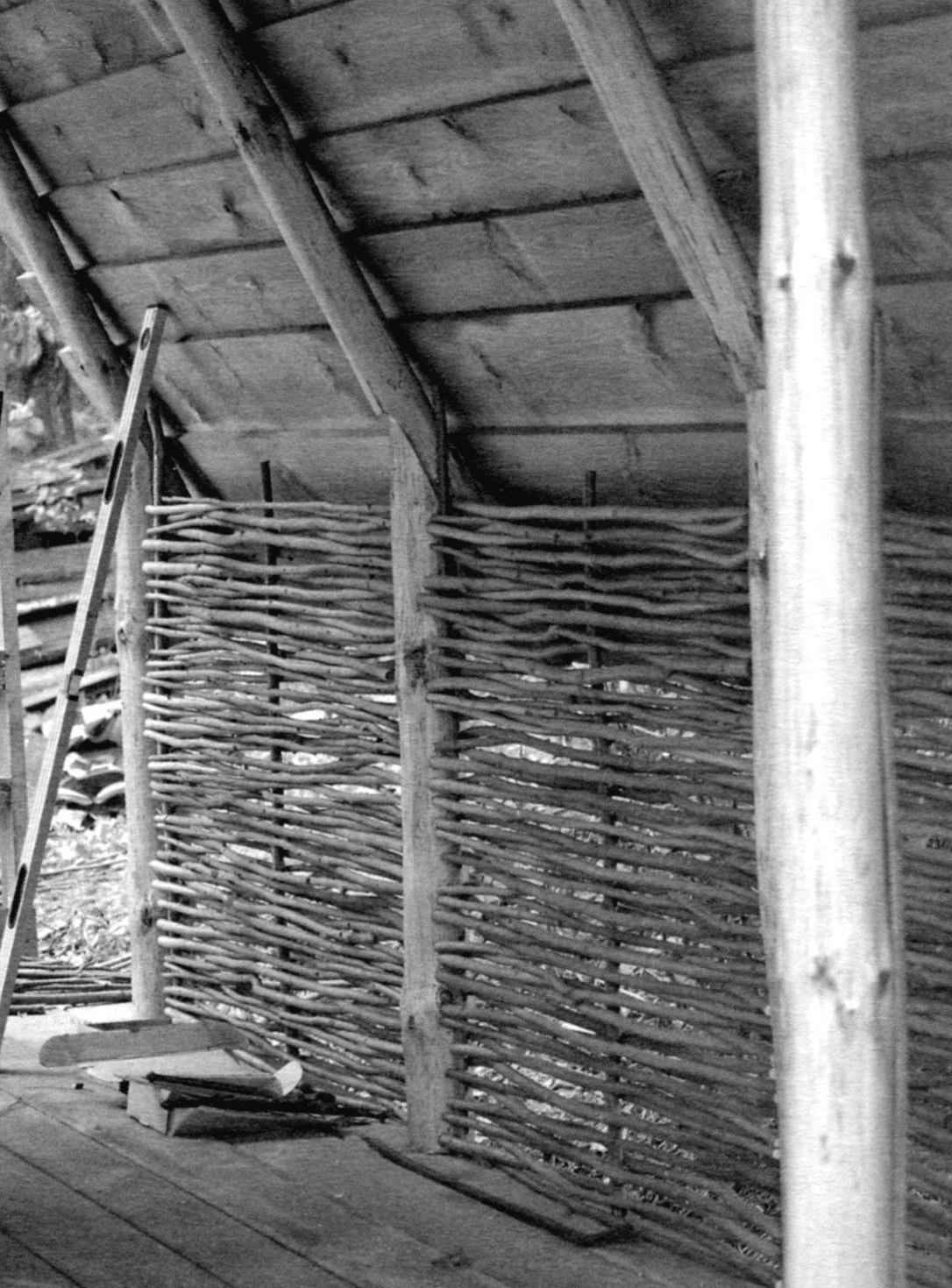 Braid the branches of the “wall” of the tent

In our case, there is the option with the flooring.

The building is constructed of down, pre-sanded, and chipped, and boards. They can be coated with an antiseptic, for example, the “Teks” of the chosen color that are in harmony with the environment.

Side post of the hut (6), forming its perimeter, out of logs with a diameter of about 200 mm and a length of 1300 mm. the Upper end of the outer side handle oblique prirub, beveling at a certain angle (unit 1). Bottom – on the contrary, should not have any bevel. Put four racks on each side using the same runs.

In a tent with both ends set at the two main uprights (2) supporting the roof, a height of 2500 mm and a diameter of approximately 150 mm. the Span between the uprights is 1000mm. on Top of them impose a transverse slug (4) – bolt (spliced before), both ends of which are processed under the angle of the roof boards (unit 3). Mounting racks to the floor and pins – nails.

Rack mounted on the side of the truss legs (5) – came down under the roof and are mounted on the beveled ends of the racks with self-drilling screws for strength. At the ends of the tent “legs” are along the main landing and fastened them in the corners with screws at an angle (a node). At the top of the ridge poles together in a half-tree down – down to 250 mm.

Roof (1) can be prepared from not edging boards size 5000×250 and a thickness of 20 or 15 mm, or equal to them slabs. They are placed horizontally so that the top edge overlaps the underlying (unit 4). The skate Board is only in contact with each other is formed in the ledge (node 2) between them should be ridged slightly (3) with a diameter of 100 mm. It connects the entire upper extremity of the tent: all three elements – these boards and a bit – fixed to each other on the nails. Thereto on both sides are attached two downed angle boards forming the gable ridge, which protects from the rain.

Board to legam sewn shut.

On the crossbars of the main props you can put a longitudinal Board – shed for things, so as not to clutter the “space”.

At the bottom of the tent is a wicker crate. To do this in the middle of the runs between the side uprights are attached to low poles under the roof. Through them horizontally eights skipped over each foot willow twigs or twigs of hazel, of a thickness not exceeding 10 mm, close to each other. You can also do with the end “walls”. The sheathing gives the structure a finished look and a natural decor.

The size and volume of the hut can be change in any direction, maintaining, however, the design principle, the construction of the nodes and, of course, appearance.