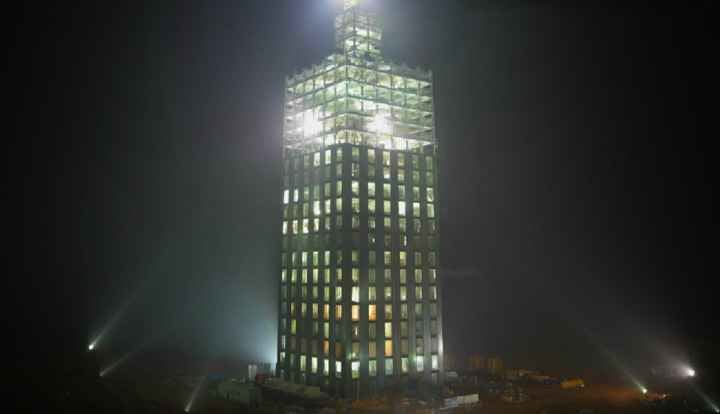 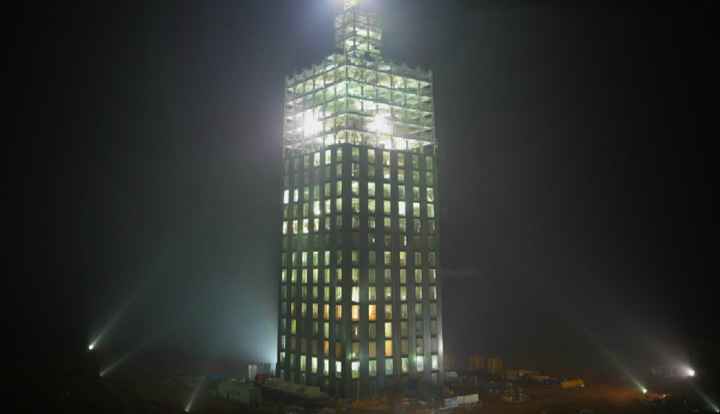 The Chinese are gradually gaining global market its own brands: a Chinese car, the Chinese household appliances – all this is quite possible to use without fear for their lives and money. But there was a new direction – the Chinese house. 30 floors in 15 days… not mastrovito or build?

The latest achievement of Chinese engineers from the company Broad Sustainable Building has swept across the world wide web, just steam roller. Sensational shots and amazing video of the construction of a 30-story T30 hotel in 360 hours – the timer ticking in the bottom corner of the video caused much more doubt and criticism than admiration. However, BSB built buildings look good – both inside and outside.

When advertising its products, the company particularly presses for higher earthquake resistance, much higher than the same parameter for other similar structures. The T30 will withstand earthquakes of a magnitude of nine points? God forbid that he do not have to experience such loads. But for some reason, believe that will stand.

However you look at it, in the development of the BSB – solid advantages. And most of them (mentioned seismic stability, energy efficiency inherent in the design service life, etc.) remain in the shadows. On the surface crazy speed. From the moment of placing the first plate on the prepared construction site to zasilania the last bed on the top floor of the T30 hotel in just 360 hours, i.e. 15 days. Due to what is impossible to sustain such a pace?

First: to design team. Of course, the BSB does not build the house in the sense that we used to invest in the concept of “construction”. The company collects them rather from a pre-made standard parts. For the most part is a steel plate and columns with diagonal spacers, which overlap set. The plates have different shapes and consist of typical square segments; the width of each plate – 3.9 m in length there are three standard – 15,6; 11.7 and 7.8 m For one route truck from the plant can bring two or three plates and all accompanying fixing materials, on one floor out of the 36 segments. The lower part of the plate is ready to finish the ceiling and the top, respectively, of the floor. On average, seven or eight of bussing ensure full delivery of all materials to build one floor. Similarly, set the side panel with a pre laid insulation and cable drain. All the details are standard, and their Assembly is greatly simplified thanks to the pins and grooves: the workers don’t need to align or measure: in fact, they “blindly” collect the building, working literally wrenches. Error – only ±2 mm, according to developers. After the installation of the slabs on the floor working just screw all the details, “obiski” and immediately stretch the elements of the electrical system, ducts, and other communications. 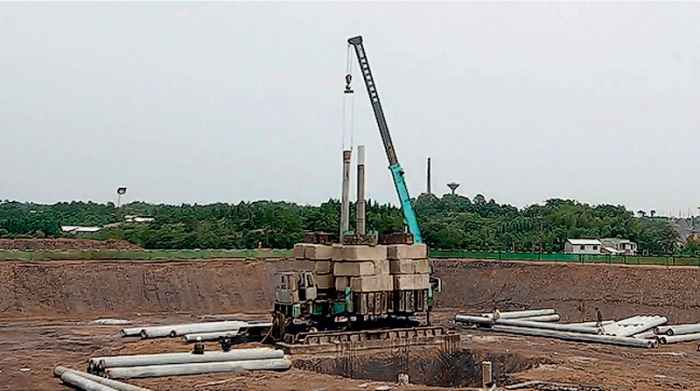 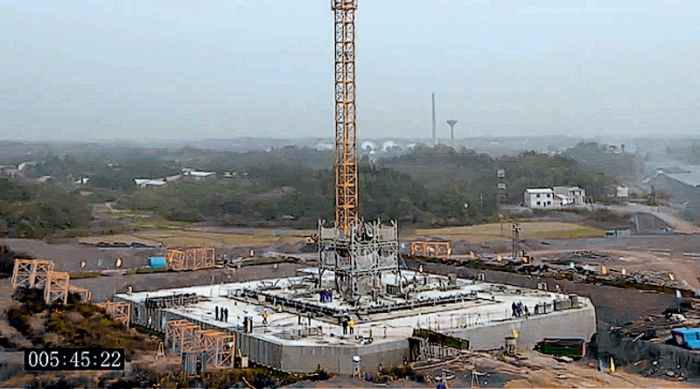 005:45:22
The first few hours of the construction is a little slower than normal, because the work is not model – mounting entry panels and supports on the Foundation. In the future, the Assembly is considerably accelerated and standartisied 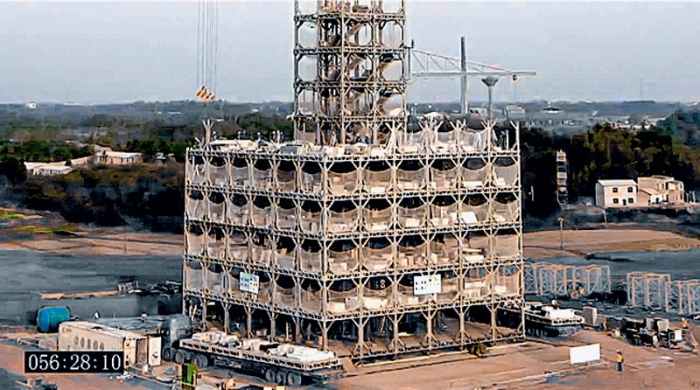 056:28:10
The Central “tower” area in four segments (7,8 x7,8 m), the pace of construction ahead of the environmental part of the T30, is equivalent to scaffolding and support for the tower crane, “growing” along with the building 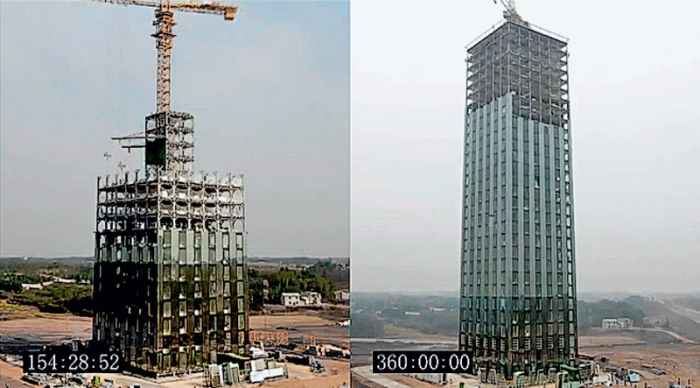 360:00:00
Left: about the middle of the work right at the moment of stopping the timer; the last 9 floors have not glazed (although already imported furniture). This is also a promotional trick to the real ending for at least another day 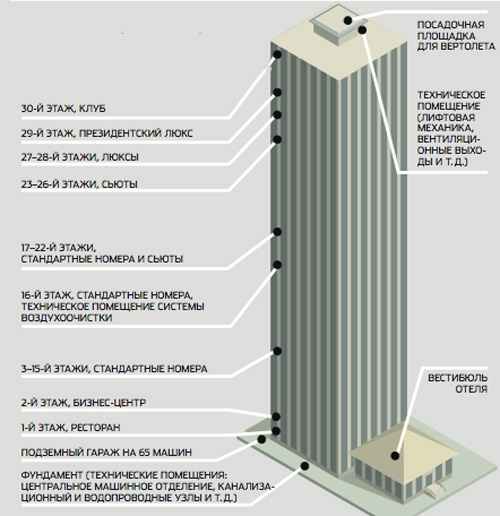 The T30 Hotel
Chinese “speed” T30 meets all technical requirements of five-star hotels. The pool would be built later 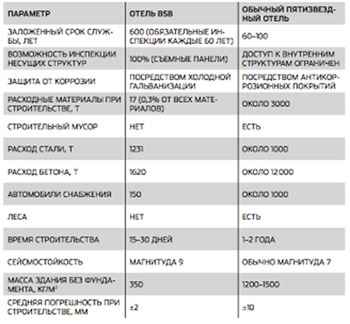 Second, parallel work. An ordinary building is being constructed in stages: first, erect the frame, then perform the following work, the next and so on. In BSB work differently. When the upper floors not yet in sight, the bottom is already set, the glass and interior trim; there is electricity and even partially imported furniture. Finish, as mentioned, is also the national team: supporting columns provided for mounting and insulation, and structural, heating, and others. Large and complex constructor assumes that it can collect in almost any order, except perhaps from the roof.

And third, the construction time is not mentioned a number of works. The countdown starts from the moment you install the first support on the Foundation. Time of ramming of the soil and the fill of the Foundation is not taken into account. The Chinese do it quite quickly, but still added a few days, anyway. The timer stops with the completion of the last floor, but finalizarea work to this point “crawls” approximately 2/3 of the building: finish the rest of the interior of the premises happening after the fact. These are the little advertising tricks. Also not taken into account man-hours spent on the production of parts. Naturally, their conveyor, factory production greatly accelerates the process, but it is also not 0 minutes 0 hours.

However, in technical documentation there is all this ingenious explanation. Building BSB nominally divided into three elements. In particular, the built in 360 hours the hotel on documentation consists of three independent structures – T30 (actually the hotel), F-JT240 (vestibule) and F-D3000-1 (basement with Parking). Such presentation allows no deception to say that the T30 was built in 15 days – excluding other structures.

However, the BSB is voiced and full introduction of hotels in operation – from the appearance at the site of the first bulldozer to cut the red ribbon. He was 48 days. Not bad for a hotel of high level (the classification of five stars) on 358 rooms! The hotel is located, by the way, in a very romantic location on the shores of lake Dongting in Hunan province.

But there are things more important than speed. Developers allocate a number of know-how on which the building BSB is significantly superior to competitors. This increased seismic resistance, excellent efficiency, high degree of purification of indoor air, durability, economy and use of environmentally friendly building materials.

The company has been developing earthquake-resistant structures after the tragic Sichuan earthquake of 2008 this started with the story of Broad Sustainable Building. After hundreds of hours of research and tests and has developed the current structure: ultralight steel structure combining vertical and diagonal supports. China Academy of building research designs conducted two major BSB test buildings were constructed copies of the 7-storey building (scale 1:4) and a 30-storey hotel (in the scale 1:10), then their “shaking”, simulating earthquakes of different magnitude. This is an extremely expensive study showed that building BSB more stable than their traditional rivals at least three times (and in some indicators – 10 – 12).

Another “trick” – energy efficiency. In buildings BSB used about 30 different energy saving technologies. Some quite easy – a competent system of thermal insulation of walls and roof (thickness of taprobanae – 15 – 35 cm vs 3 to 5 in regular buildings) and original double-glazed Windows, transforming the building into an analogue of a large sleeping bag, led lamps. There are more elegant ideas: elevators allow you to produce energy during the descent down; the economy is achieved also due to the technology of water purification and re-use in a sewer system. Original technology BSB allows you to save energy thanks to the heat exchange between the external and internal environment.

Generally, the air purification is the main direction of activities of the parent company BSB – Broad Group. In each room of each building BSB sets the membrane to control air pollution. Depending on the purpose of the room control is performed by the method of PM0.3, PM2.5 or PM10 (where the number indicates the diameter in micrometers – air-pollutant particles that cannot pass through the filter of the detector). To clean use a three-step method “of superfilters”. The first stage is a coarse filter, the second – know-how, electrostatic filter, check to 98% of harmful impurities, the third is a classic HEPA filter. The whole system works as a great modern cleaner.

A significant advantage of this method – low price: factory standard items, the minimum cost of transport of materials and construction. The construction is surprisingly clean, debris is virtually nonexistent. By the way, so the rapid construction of T30 was another goal in addition to advertising in the terms of reference included the need to catch up to the beginning of the rainy season.

What the future offers

Of course, BSB demonstrated technology is the future. It has not yet come, and before his arrival will be a year or two, but the confidence the Chinese have a huge. To date (over two years) they built four buildings – each with something different from the previous one – mainly to test the methodology.

Really Broad title shot on March 6, 2010 at the EXPO 2010 in Shanghai, where a six-story pavilion of CPO16 was erected in just six hours in front of the astonished audience. In July, for 160 hours was erected a 15-story New Ark Hotel in Changsha (Hunan province), and in November – the pavilion Broad Group in Cancun (Mexico) at the UN conference on climate change in eight days. The T30 was built in December 2011, was the largest and very successful project BSB. The hotel was built just over 200 workers (not counting employees of the factory-manufacturer of structural elements) and a single tower crane. When the extension conveyor production and the company BSB promises to build 50 buildings a month by 2014.

BSB engineers are constantly improving design. The universality of their power circuit to enable the construction of panels and supports virtually any BSB buildings and structures. And so the Chinese are not going to stop there. In late 2010 they announced the intention to implement makeability project Sky City – a 200-storey earthquake-resistant skyscraper, in which both could live and work more than 100 000 people. Sketches and technical documentation of Sky City looks more like footage from a futuristic movie like “the Fifth element”. One of the social problems of Sky City (or similar model megatall) in case of success – to allow people to live and work in the same building, thus solving the problems of traffic and overcrowding. The size of a skyscraper will give the opportunity to smash the living space and jobs at a proper distance from each other.

Given the capacity of the Chinese and their rate of technical development over the last 15 years, you can believe in hundreds of homes, built on the principle of the T30, and Titanic in the Sky City. Although… it is Much nicer to live in the city, beautiful architectural personality, rather than the standard boxes. Even energy efficient and earthquake resistant.