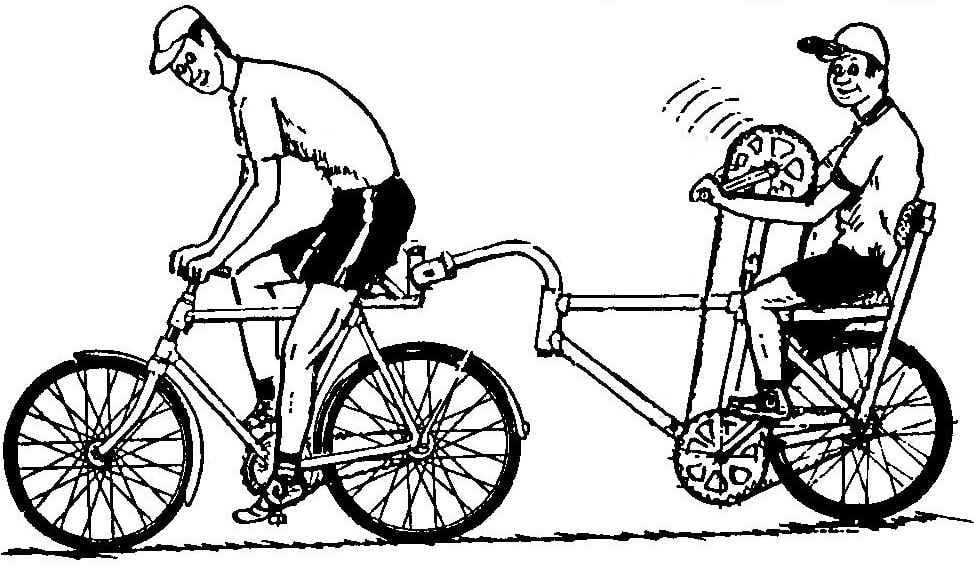 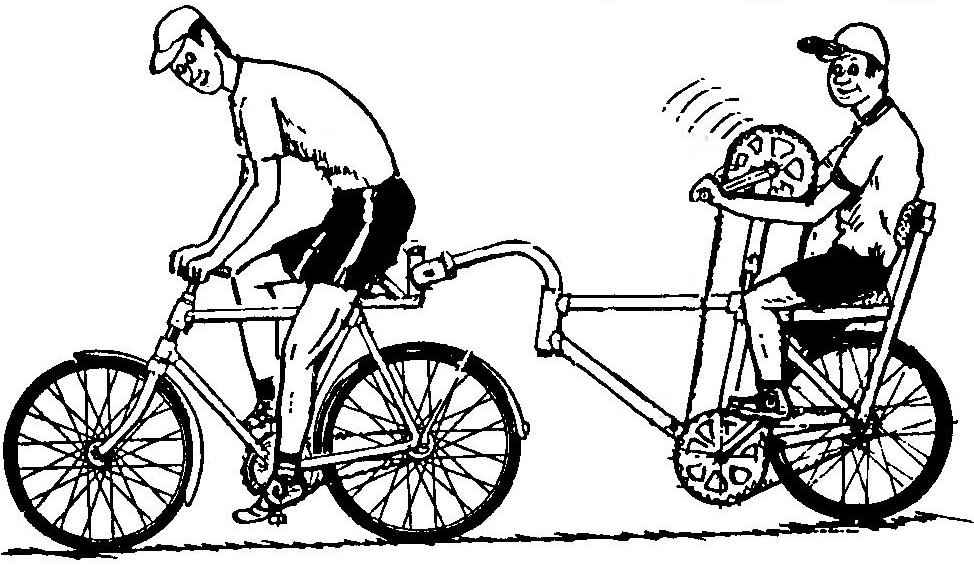 Many lovers of active rest on the nature, prefer Cycling to other types of short journeys: on foot, by car. Walking on foot you can fully enjoy the pleasures of nature, slowly to see, but, unfortunately, only in the immediate vicinity. When the drive to communicate have no longer with nature, and with the road, to break away from that is problematic even in a jeep.

The optimum here would be on your bike, but from the noise and hurry away animals and birds tend to fly away.

To help out in this case, other two-wheeled friend, the Bicycle.

For walks two with the satellite it is not necessary to have a second bike. It is preferable to make the trailer, but not simple, and self-driven, and besides double leg and hand. In such a kind of tandem and ride easier — Sputnik at any moment come to help and to communicate easier because you are always near.

Here’s a passenger one-wheeled trailer and is offered to attention of readers.

It is the Foundation of the frame from the old road bike, no alterations. From the used drive.

The towing device of the trailer is also similar. Only instead of the axle shafts to the hub at a tangent is welded goal kowa axis. The very top bushing secured against unintentional coming off of the hook bracket screw M20 with the puck. The screw is screwed into the bracket, which it pre-cut in the appropriate thread. Wheel — rear from the same old bike. It the diameter is the same as the bike of the tractor, and is the best option. The brake mechanism of the wheel is dismantled, so the tractor is equipped with an additional hand brake. 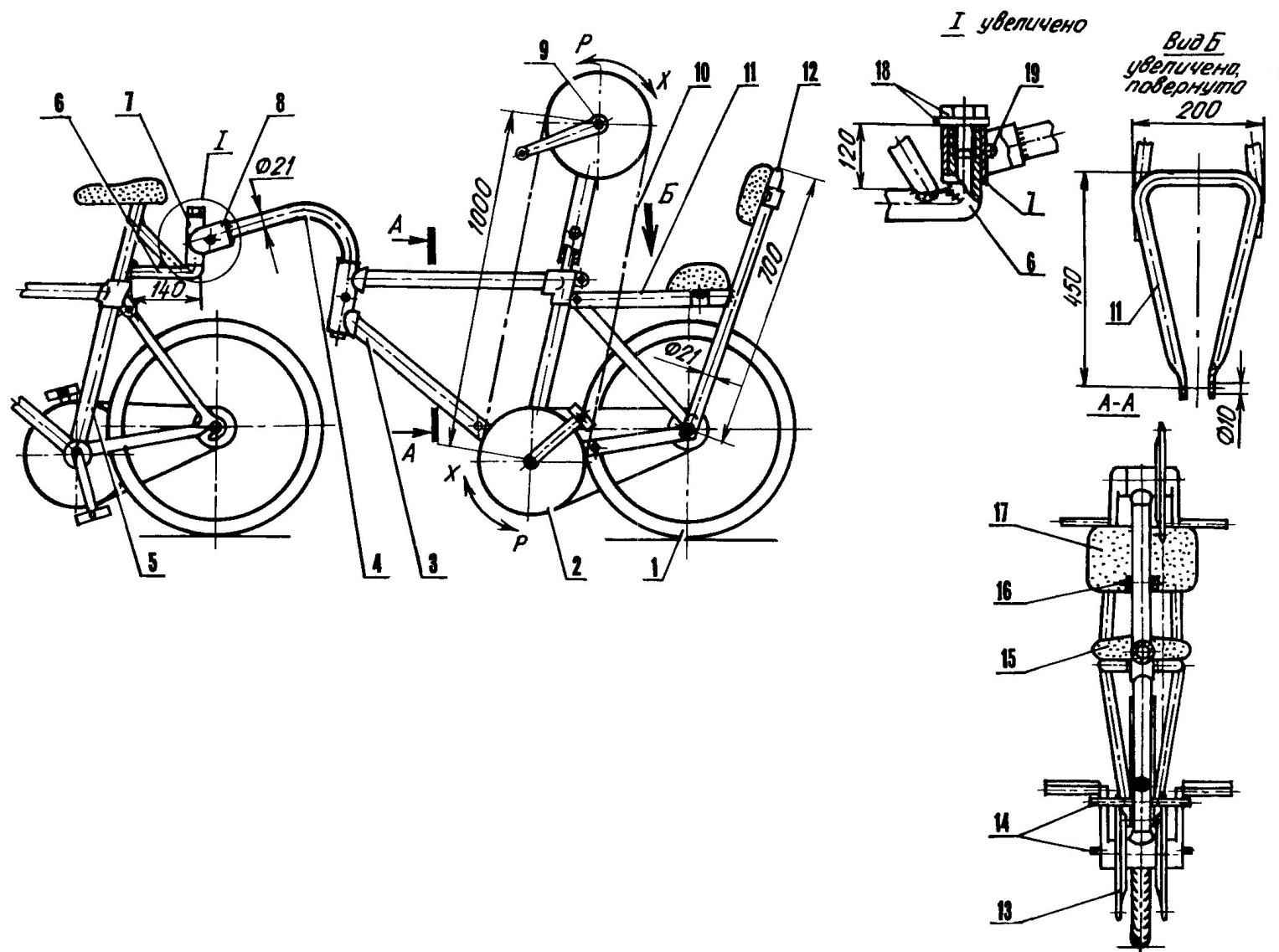 On the shaft of foot actuator under the left connecting rod has an extra asterisk, is exactly the same as full-time under the right. The rod is deployed on 180° and now coincides in direction with the other.

Manual drive bottom bracket with sprocket, cranks, chain, and part of the seat tube is also taken from the old road bike, but the other. (It is important that the sprocket was the same as for the leg drive). On the frame of the trailer it is mounted on a seatpost rack (placed on her by the cut of the seat tube). To drive did not turn in the pipe rack and drilled a through hole is inserted a locking bolt M6. One of the rods (right) is also deployed to 180°.

Asterisk manual drive is connected to the auxiliary sprocket foot long chain. When mounting the rods on the different drives installed in “anti-phase”: for the leg they geared up, manual — down.

On the bottom pipe frame and chain plug trailer mounted travel stops connecting rods, since the rods with the drive not spin: the foot in the course of working push myself forward, and hand draw. After this simultaneous movement of the hands and feet in the opposite direction the rods are returned to the original position (idling).

In place of the trunk mounted arc-frame seat that is welded to his spine to the middle part of the arc stand. Tips details curved from a thin-walled half-inch tubes are pre-tapered and drilled holes in the frame for bolt M8, and in a rack — the diameter of the end of the wheel axle, on which the strut is worn and secured with nuts.

On the frame mounted soft seat, and the front — same back.

On walks over rough terrain when moving on the rise of the efforts of one host may not be enough. Then will come to his slave, which will serve as a good “pusher”, providing extra traction, not only with feet and hands — because he is free, because it steers the tandem host.

In another case, the function of the “engine” of the slave can take over completely, leaving only leading “control” task. Well, when someone gets tired, you can in fact swap places.