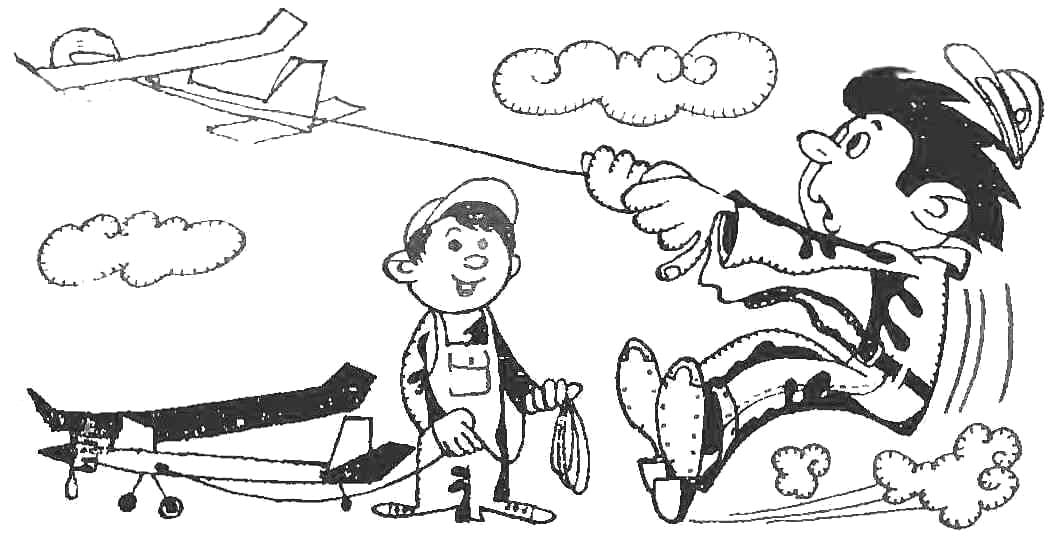 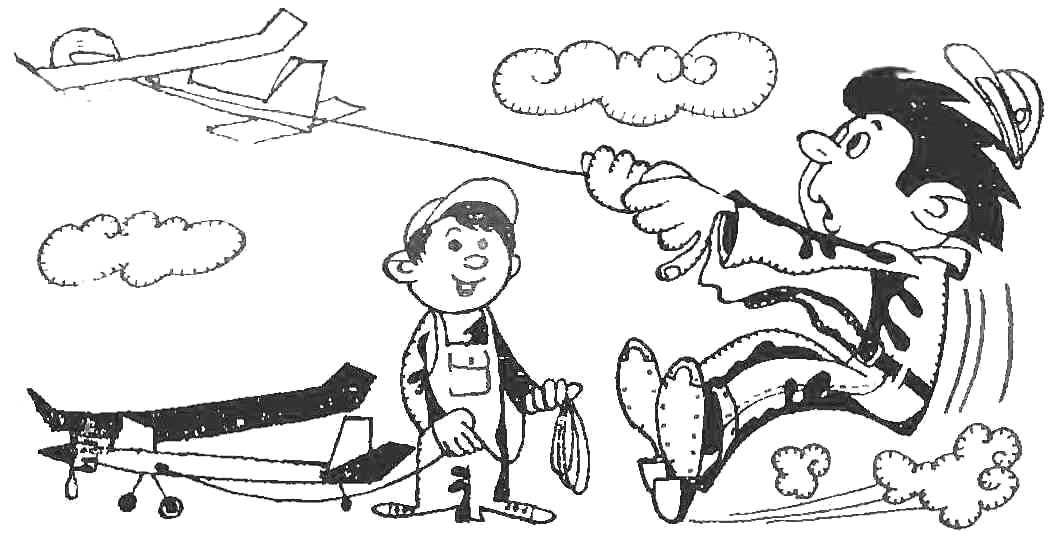 In the fourth issue of our magazine published model glider of the world champion V. Extencive. Today we offer timesnow model champion of the USSR E. Verbitsky. She applied some new technical solutions, providing the model a clear advantage at the USSR championship of 1973. Especially clearly its benefits manifested in the last, tenth round of the championship of the USSR.
According to the rules in the tenth round, the engine should be no more than 4 C. At these conditions, the model VE-30 stayed in the air for 2 min 18 s. in the rest of the winners — less than 1 min. She had the best performance and the height of rise (200-215 m), and in planning. Planning, with 50-metre high guard rails p. 90-95
On the model introduced several innovations. Most effective, perhaps, is the use of a wing with variable curvature of the profile. The relative thickness of a few less conventional and is 7%. During takeoff the relative concavity of the profile (in the midline) is 2.5%, so it is concave. When planning changes to the profile convexo-concave to the relative concavity of 4.5%.
Otherwise, changes the curvature. Previously, this was done with the help of the flap (40-50%). But it is very difficult to manufacture. Moreover, even minor temperature changes caused warping of the flaps, causing the flight was often unstable. Had to find another constructive of 1 ton solution which would meet the necessary requirements. Such a solution is found. The line “break” the profile placed at 25% chord (front spar). Power became the rear part of the wing, not the front as before. Due to the fact that “kink” is moved to the location of the maximum profile thickness, the stiffness of both parts of the wing are much improved in comparison with previously used flaps. Although the location of the line of “break” on the upper contour of the profile leads while the engine rise to the formation of small cracks at the lower rim, the aerodynamic quality of the model, this does not suffer. To avoid overflow stream through the “fracture” (because of the pressure difference on the upper and lower surfaces of the wing), on the upper surface across the span glued Mylar film.
I think it makes no sense to analyze in detail the feasibility of such wings from the point of view of aerodynamics. Simplistically, it looks like.
During takeoff, when the speed is much greater than the speed of planning, and the trajectory is almost vertical, it is necessary to reduce the resistance and lift force of the wing, which is useless in this case. This increases the height of the takeoff. To prolong the plan, it is advisable to use profiles with more curvature. This gives another effect: a more subtle profile has a smaller drag coefficient.
In fairness it should be noted that this model is on the stability of the engine take-off worse than other models of the USSR national team. Mechanized wing with all its positive qualities, from the point of view of aerodynamics, the operation is quite difficult, as it has less rigidity than solid. 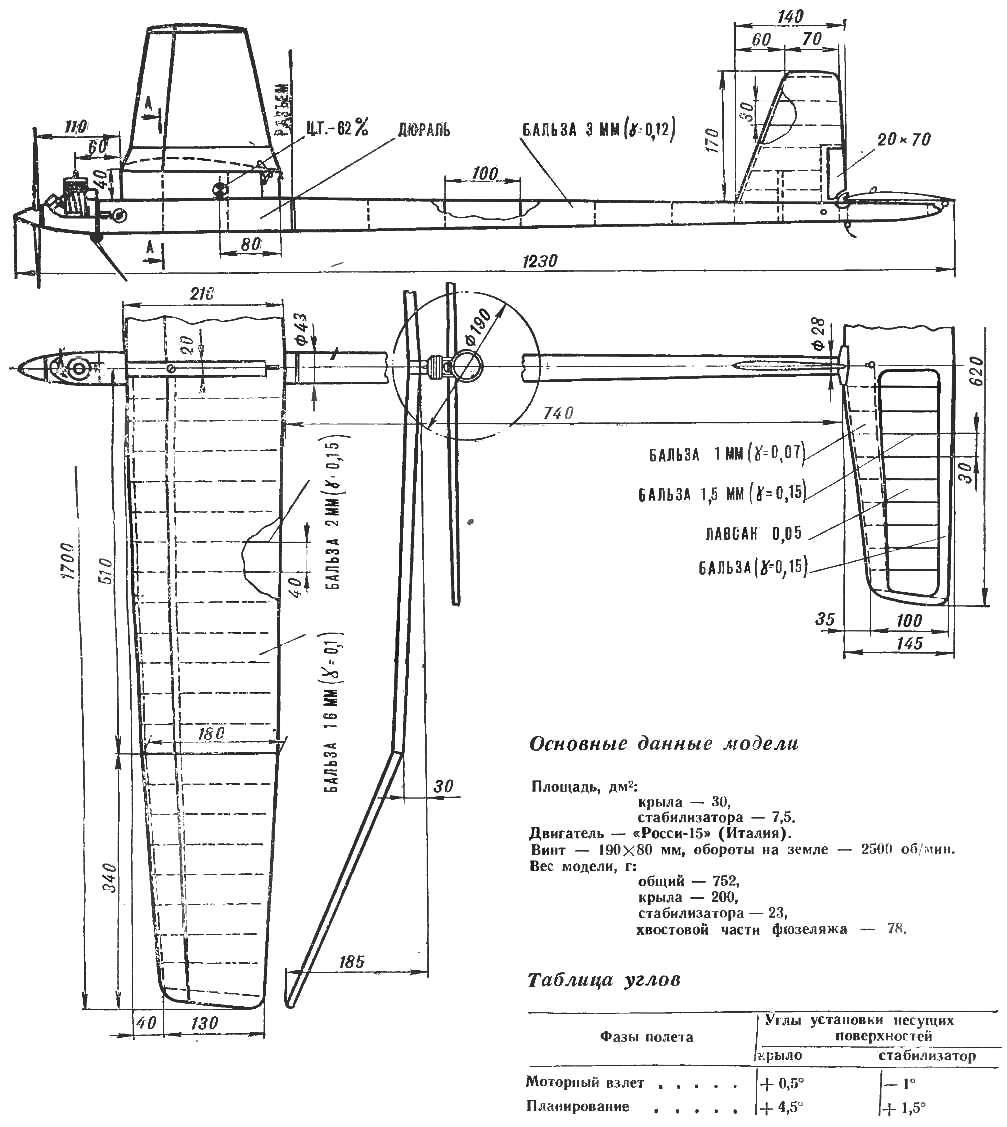 The sequence of actuation commands for the timer:
1. Perezaliv.
2. The spring stop screw +0.5 s.
3. The rudder, + 1 S.
4 Stabilizer, + 1.5 seconds.
5. Wing +2.5 s.
6. The restriction of flight.
The second distinguishing feature of the model is the use of automatic rebalancing, which allows the separate installation angles of the wing and stabilizer (and adjustable). The response time is also adjustable, which ensures a smooth transition from the engine in flight planning.
Not less important innovation that gives a tangible effect, is the first applied method of stopping the engine. Experimental verification showed that the modern model aircraft engines with nylon and fiberglassing propellers have the run of 2-2,5 s. stopping their perezalivat. In this model, stopping the combo. The first flash perezaliv, and via a 0.3— 0.5 s. in engagement with the thrust washer propeller includes the spring final stop, after which the engine stops immediately. Active period of operation of the engine is increased 1.5—2 s. additional tours this is especially important because the timing of the operation of the engine is reduced with each subsequent tour and “price” of a second rising. A spring is an elastic steel wire Ø 2.5 mm, is wound in a spiral (4 turns) around the sock and sump.
A few words about the design.
Wing zelenoborskoe sheathing thickness 1,5 mm. the weight of balsa is not more than 0.1 g/cm3. Longitudinal variable section — pine. Maximum cross section shelves of the spar — 2,5X10 mm, minimum 1X2 mm., the Longitudinal force is at the rear of the wing in place, the maximum building height profile. The articulation of the front and rear parts of the wing is performed by means of loops of Mylar film with a thickness of 0.05 mm. the entire wing to avoid warping, assembled on epoxy glue K-153. It is attached to the fuselage at pin diameter of 5 mm was” 50KHFA, heat-treated by the appropriate technology. The wing is covered with thin long fiber paper on Amalia megaelaton and covered with varnish. The weight of the wing 200 g
Stabilizer lightweight design. With balsa covered only the front part of the spar. The weight of balsa is not more than 0.08 g/cm3. Spar — pine. Section shelves: max — 1X5 mm, minimum mm. 1X1 Rib stabilizer in the area from the spar to the rear edge beaded birch veneer with a thickness of 0.3 mm, the stabilizer covered with Mylar film with a thickness of 0.05 mm. its Weight is 23 g. 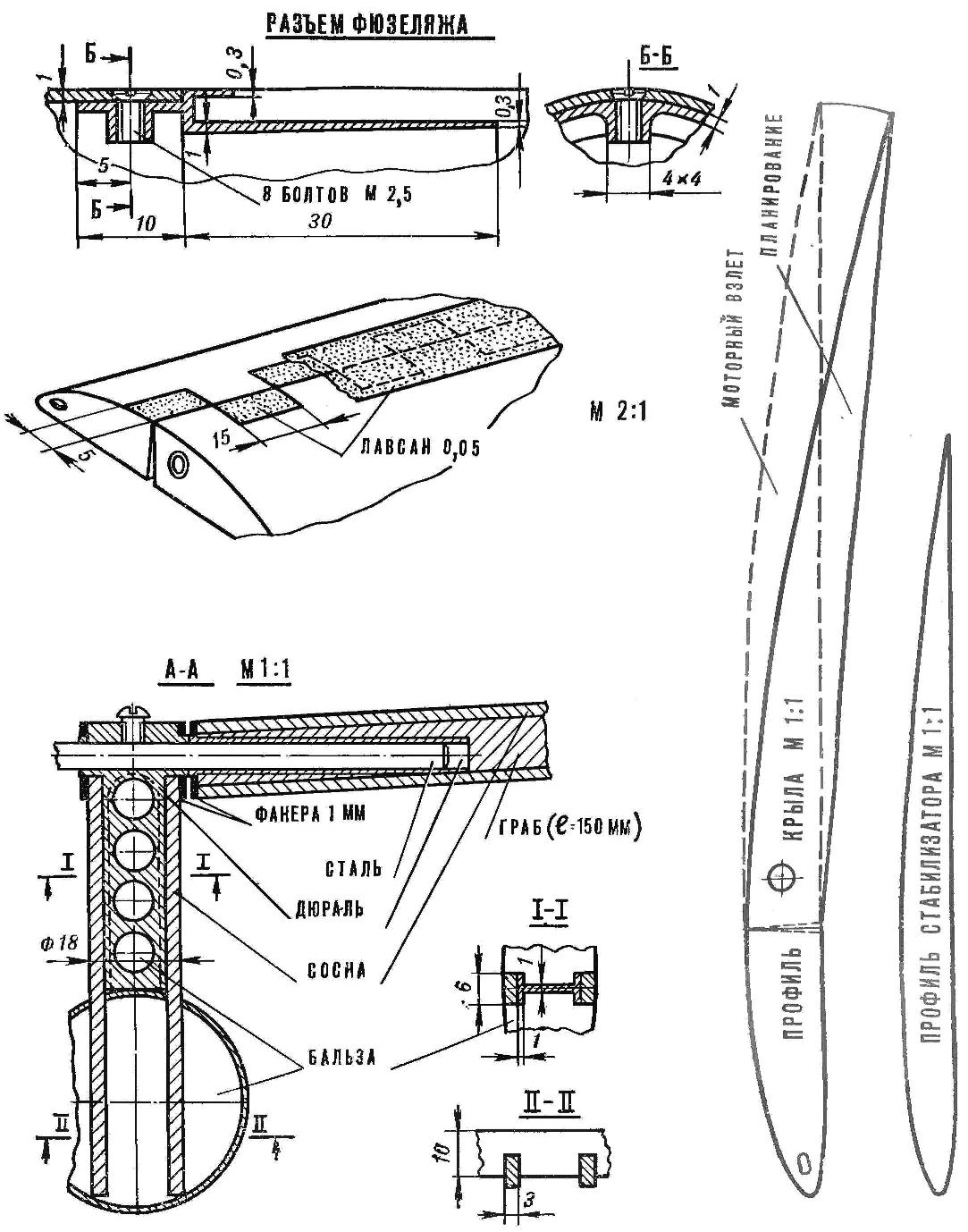 The fuselage split. The front part is made of duralumin tubes with a diameter of 43Х1 mm, light weight in the right places chemical milling and coated with a hard antirealism layer. The timer is located in the compartment along with the fuel tank and isolated. The back part is made of balsa wood 2.5 mm thick and is a truncated cone. Bent balsa wood blank and the two halves together with polosamote then glued together. In places the bonding is installed spar of hard balsa tapered. The adapter is cylindrical, the connection 8 bolts M2,5.
The keel, stacked, sheeted with balsa with a thickness of 1 mm. the Entire tail section is covered with thin silk on Amalia, and over a thin silk long-fibre paper. The keel is covered with only paper. The weight of the tail section with the rods 78 g.
Engine “Rossi-15” fiberglass screw their own making develops (on the ground) 25 000 rpm, screw — Ø 190 mm, step is 80 mm.
It remains to add that at the all-Union competition in Tashkent in April 1974, the model ensured the victory in the class time with a score of 1260 + 180 points.