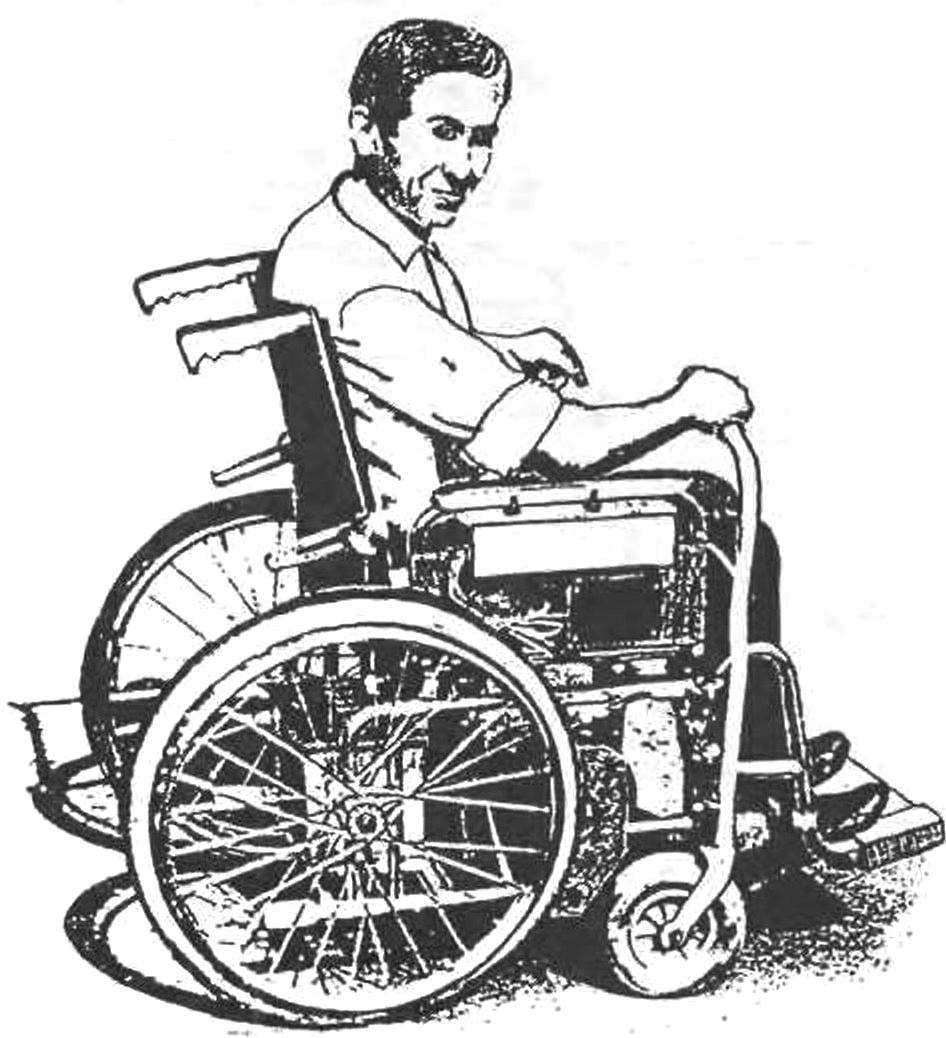 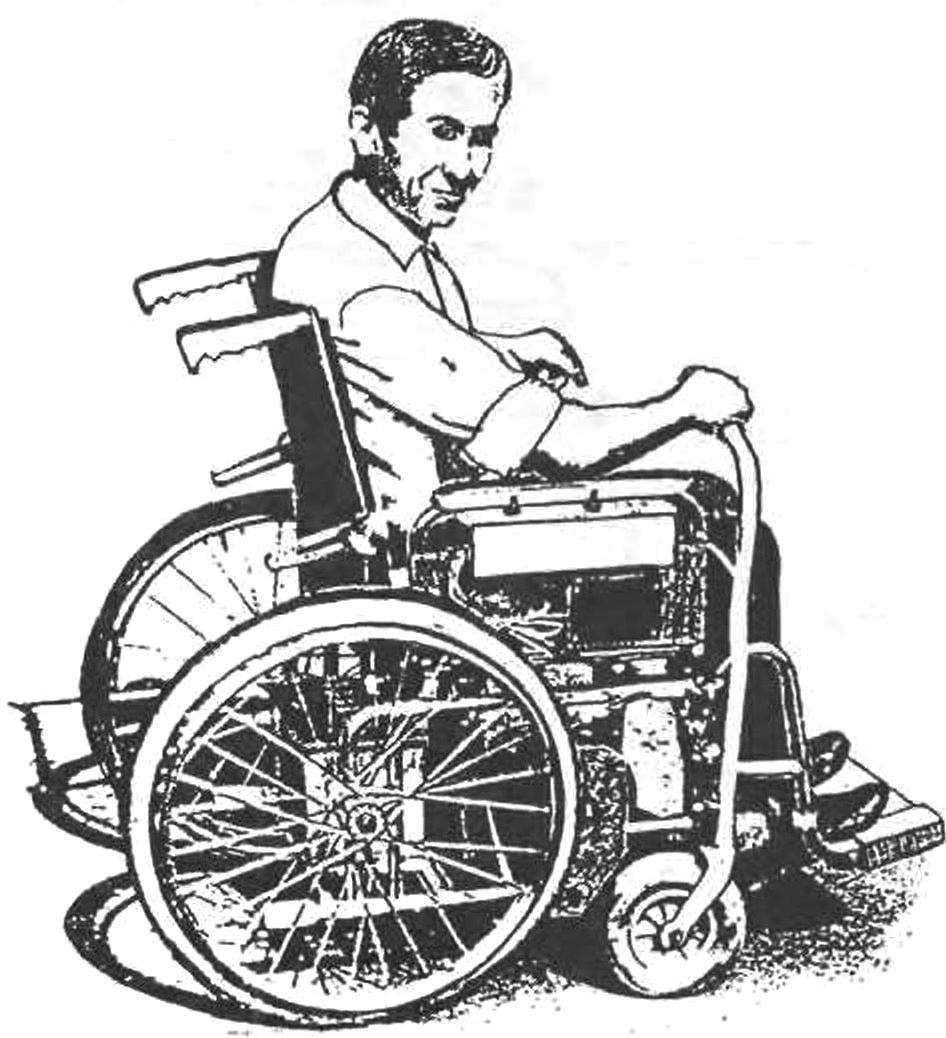 A simple actuator that turns ordinary wheelchairs into self-propelled designed for small business “Electric” engineer A. COHOM. The device is simple enough; to make it even in the apartment, without the use of special tools and materials. As the base used, the most common and reliable wheelchair wheelchair model “400” production of Stavrovskiy plant, although you can upgrade so any.
As the power unit recommended motor type МЭ272 voltage of 12 V and a capacity of 100 watts (from a fan of the car “the Zhiguli”). The torque from the motor shaft is transmitted to the wheel using a simple friction roller. On the motor shaft it is attached by a pin and a special elongated nut. The best material for roller — cast iron, because it has good frictional properties. It should be noted that the roller and spargana is the only turned parts of the whole structure.
The motor is secured by three threaded studs M6 on the intermediate plate. And that, in turn, is fixed on the frame by a screw M8.
The friction roller is pressed against the wheel through the mechanism of the right of the Parking brake, so that his arm becomes a lever of the clutch control. Finalization of the mechanism is to remove the plastic brake pads and cutting of the lever to which it is attached. At a distance of 3…5 mm from the edge of the slot in the lever propisyvaetsya vertical groove sizes 4,2×6 mm, which is passed through the M4 bolt connecting the lever and the intermediate plate — the base of the motor.
Former brake should be adjusted so that when pressing on the lever (until it stops), the roller is pressed into the tire by 5…7 mm, and when the lever to another extreme position out of contact with the wheel.
To set the pressure node in the frame of the chair, it is necessary to cut the pipe fixing seat. The strength of the chair is not affected, but since such a procedure typically is performed infrequently, it is unlikely that these difficulties will be crucial.
Car battery type 6СТ55 installs behind the seat on the frame of duralumin angles, fixed to the frame with screws M6. 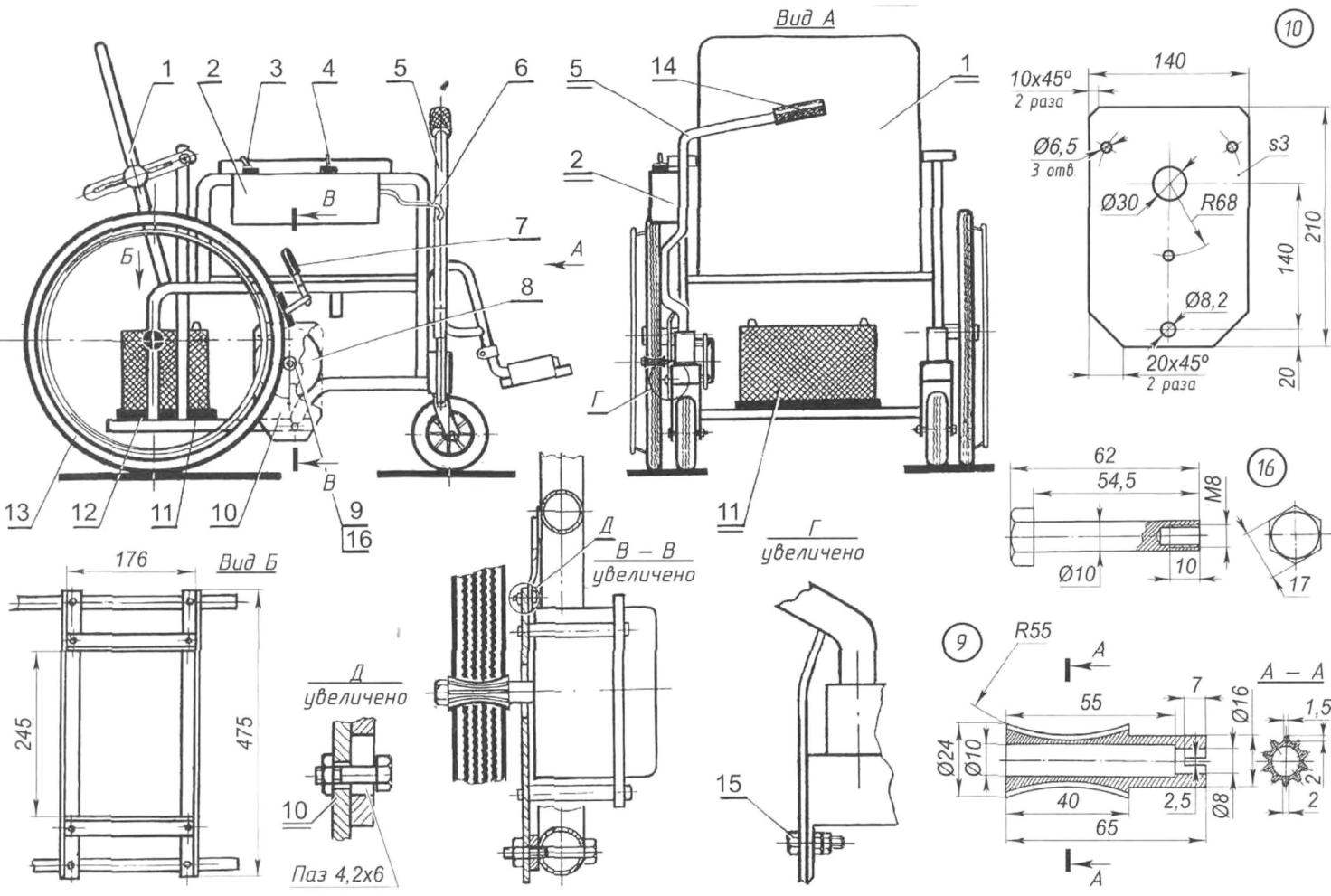 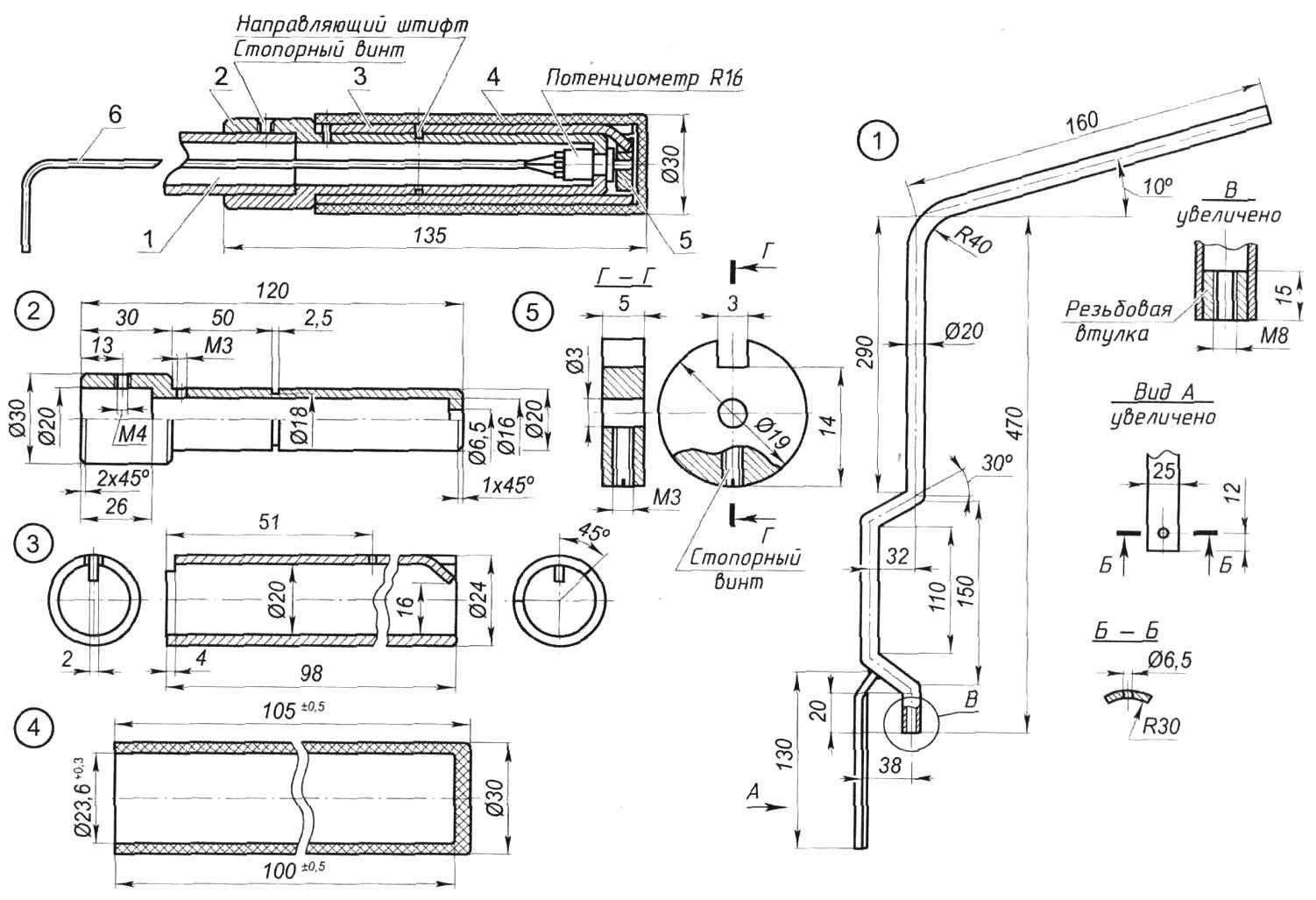 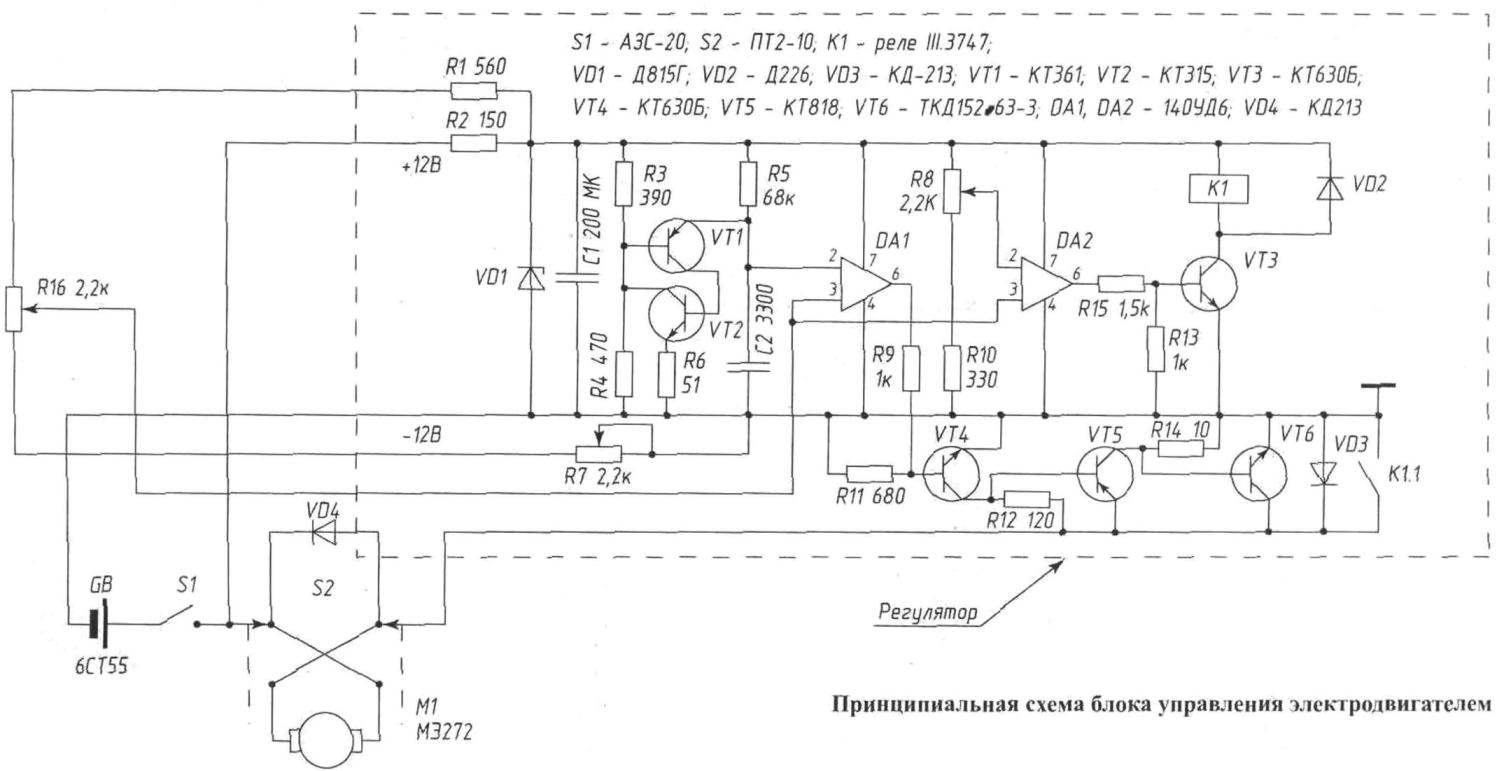 The traction motor commutation is done by electronic speed controller. Note that the transistors VT5 and VT6 are installed on heat-removing radiators with a dissipation rate of at least 20 watts. Relay K1 — type 111.3747 — is used to turn the headlights on the car “the Zhiguli”. Turn on the controller unit the main switch S1 of type А3С-20, acting as a circuit breaker in case of overload. The switch S2 type ПТ2-10 is designed to change the direction of rotation of the motor shaft and, accordingly, reversal of the progress of the chair.
Power transistor VT6 is connected in series with the motor. The transistor is controlled by the generator, assembled on the transistors VT1 and VT2, through the device on DA1. Specifies the element is a potentiometer R16, which is installed in the control handle steering lever. When fully open the transistor VT6 “zamorachivatsja” contacts K1.1 relay K1. The angle of rotation of the resistor R16 in which this occurs is determined by the resistor R8 and the lower threshold of “ajar” output of the key is exposed through a resistor R7. Section of connecting wires circuit “battery — controller — remote control” — not less than 2 mm2.
The chair is controlled with a lever, the threaded end of which screws onto the axle right or left front swivel wheels and fixed with the bolt of M6 with nut and lock nut. At the opposite end of the lever is mounted a resistor R16 regulating the speed of movement. 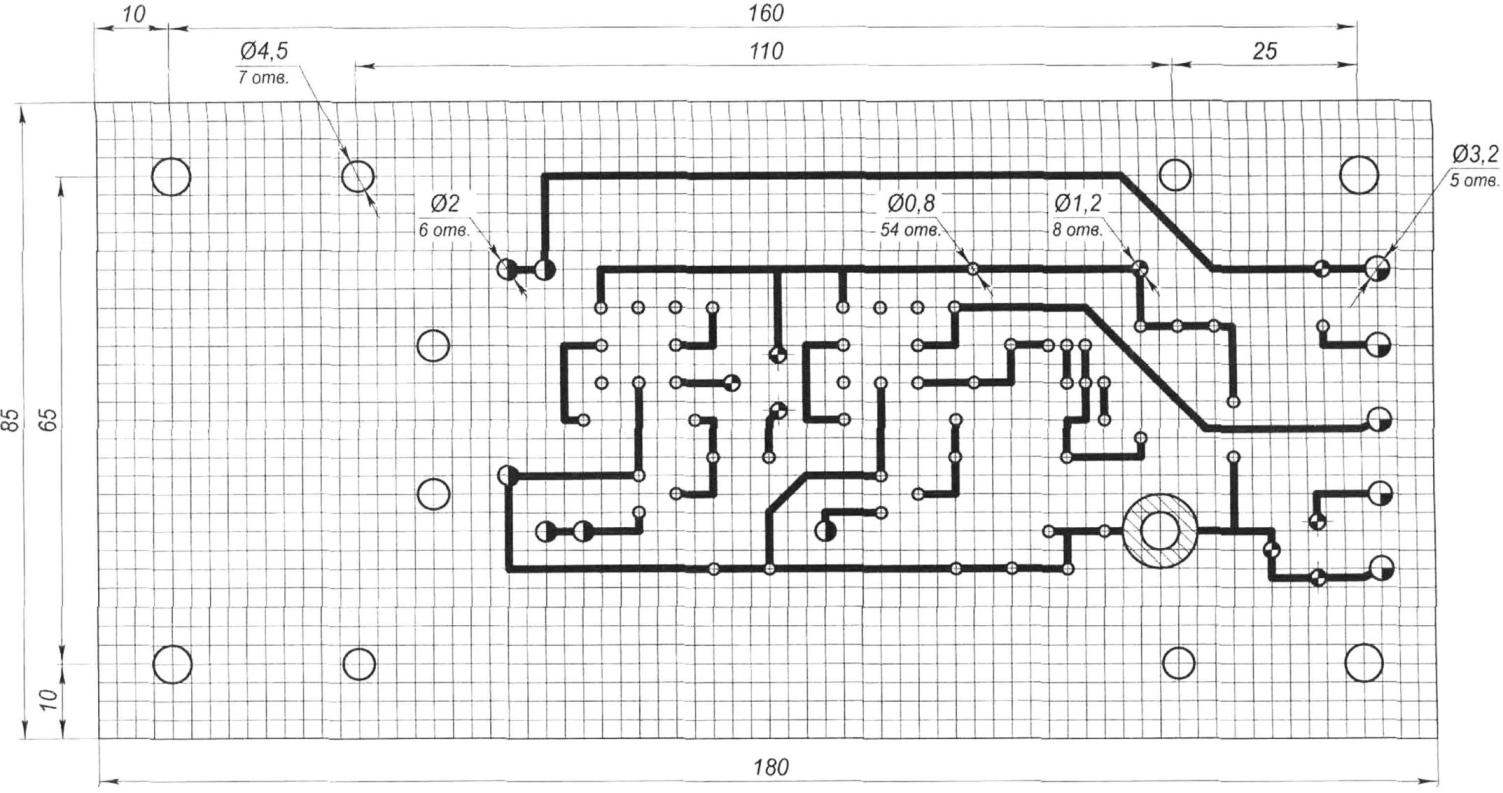 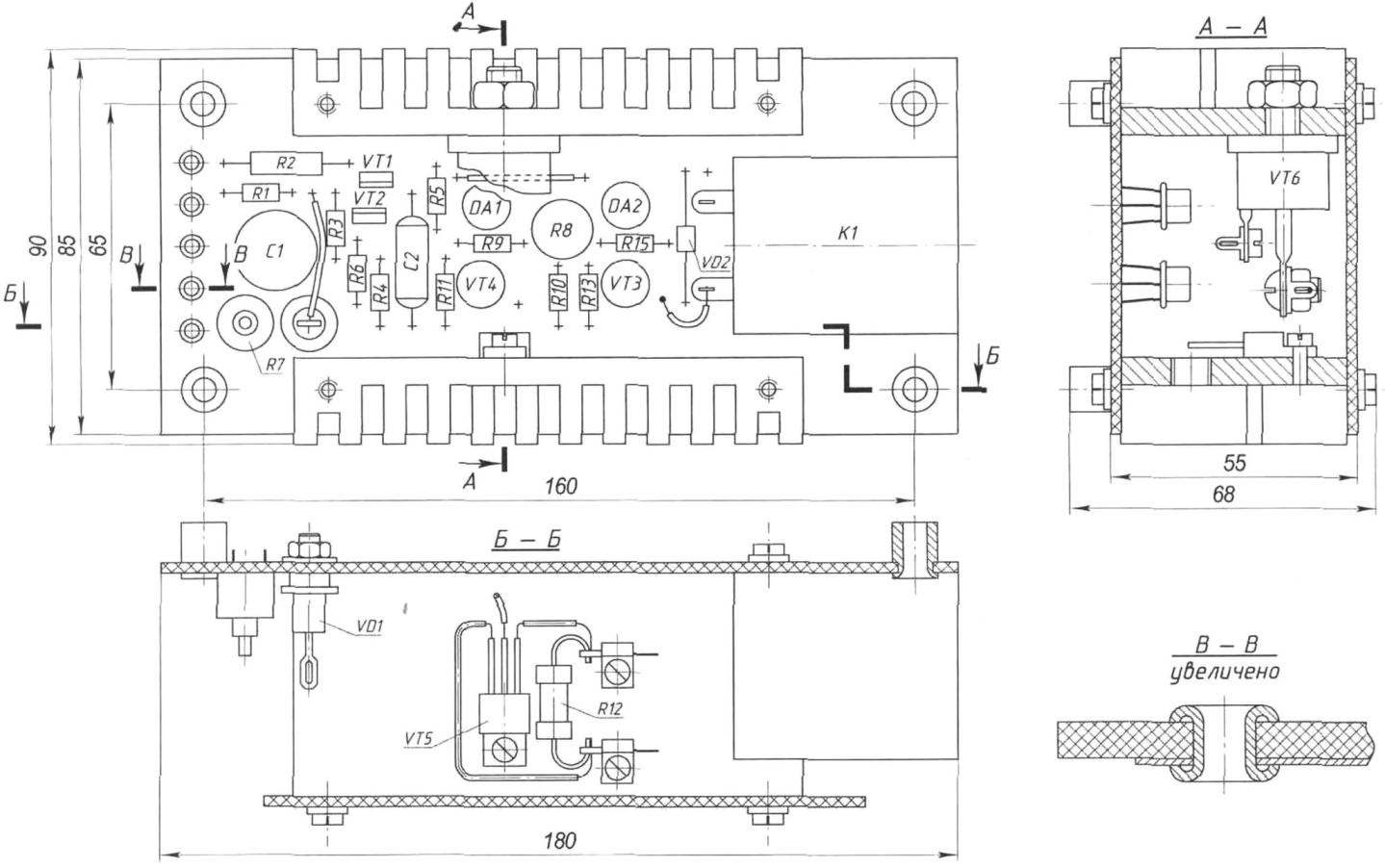 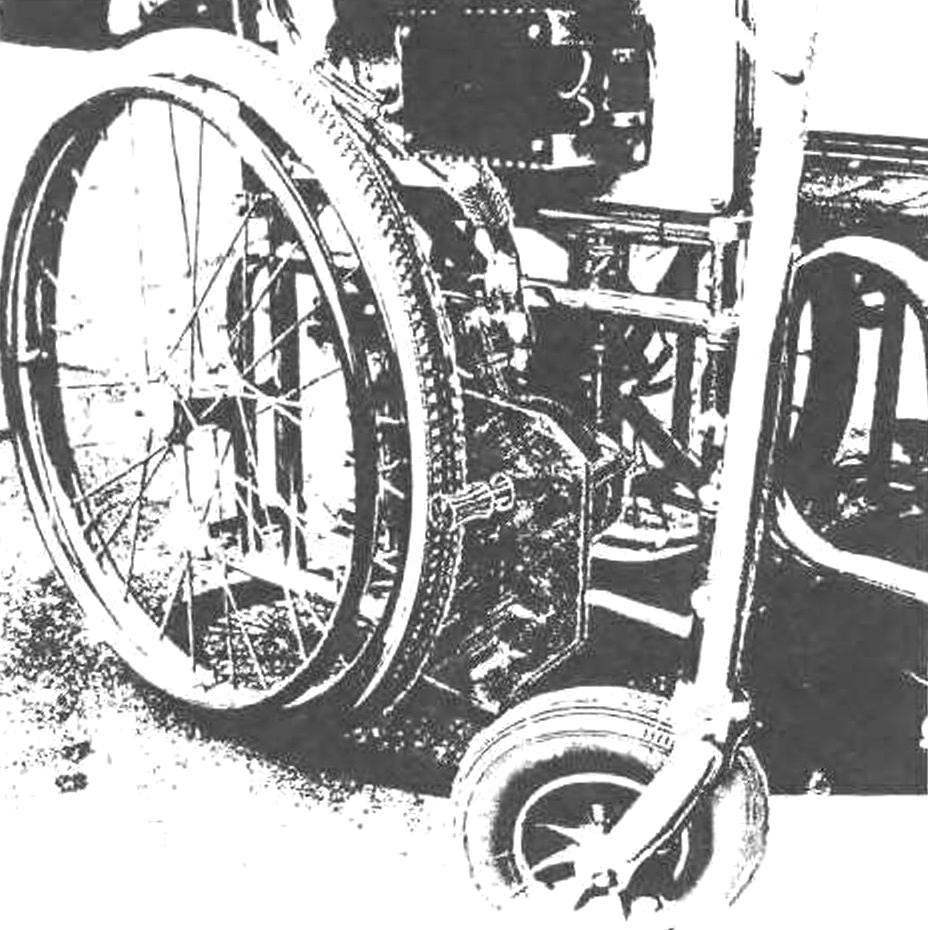 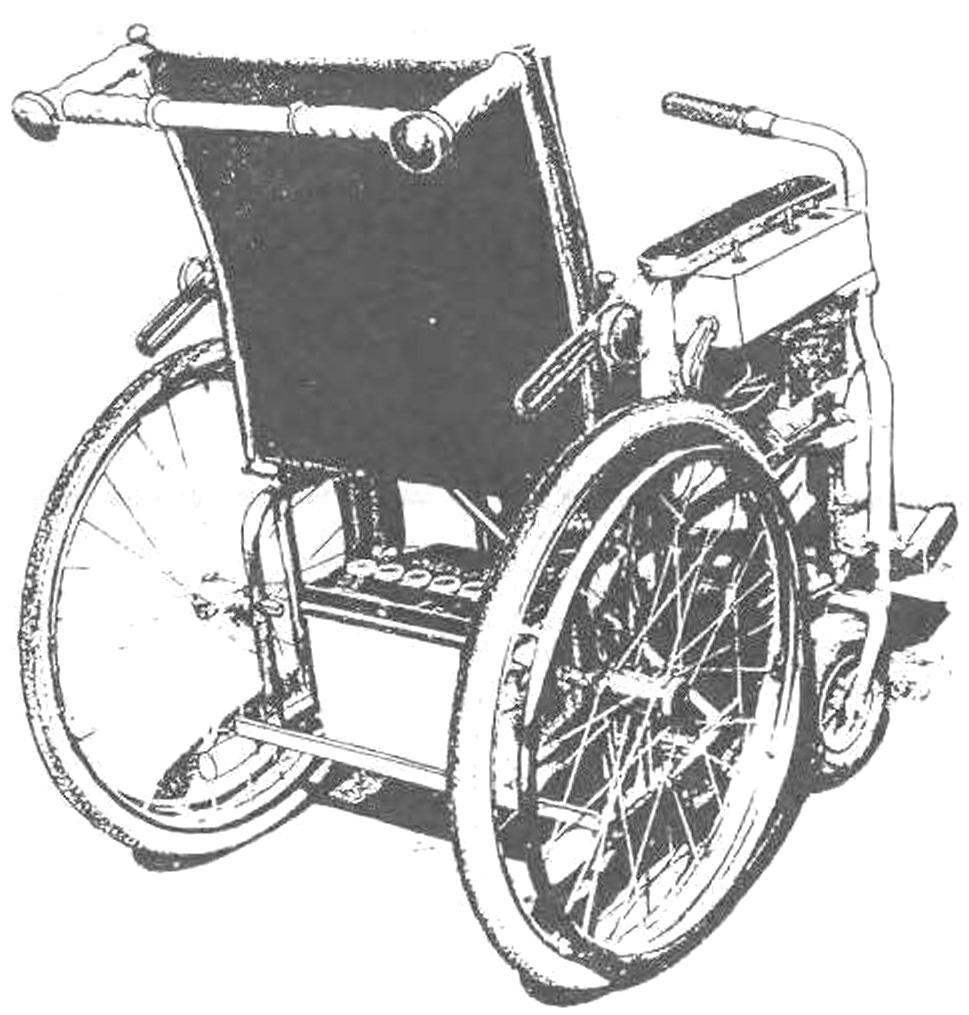 Brake system-electric seats — regular acting on the left wheel. For ease of use with the brake lever removed the plastic handle and welded it to a steel rod with a diameter of 8 mm and a length of about 300 mm. Now, if necessary, the chair can be slow down when driving, motor.
There are no special requirements when operating “Alerana-2” is not regulated. It is important to monitor the tyre pressure, in particular the right wheel, which is pressed against the friction roller when the pressure falls, it could slip. Well should be pumped up and the front wheels — this will reduce rolling resistance and improve handling.
A chair equipped with such electric drive, moving almost silently and has good maneuverability. The reserve from the charged battery — 20…25 km and a Speed of about 6 km/h. Clutch lever allows you to turn off the friction roller from the wheel — in this case the chair can be used in its usual embodiment, rotating wheel by hand.
A. KNOCH