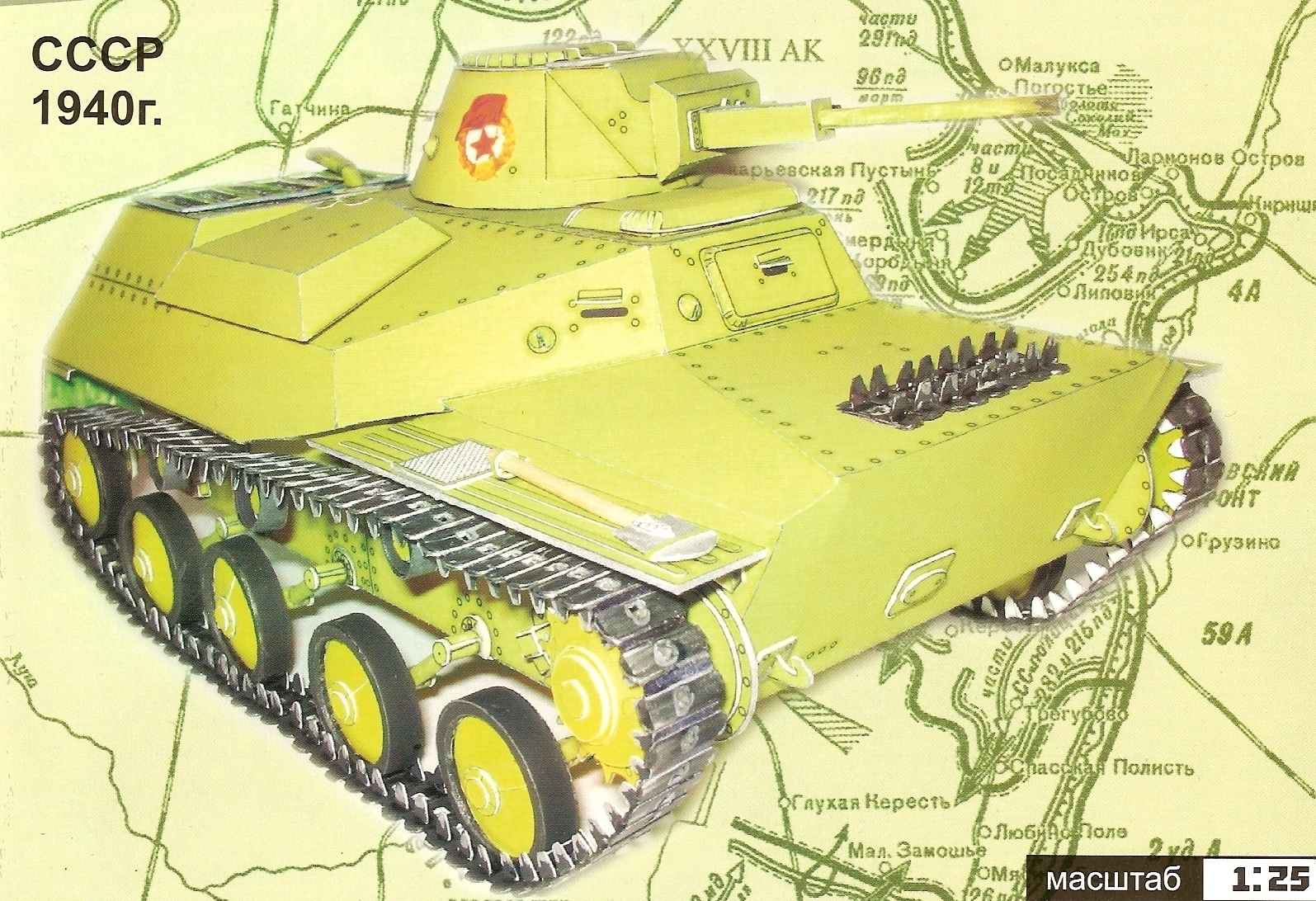 Floating tank T-40 serially produced in the USSR since 1940 and was intended to replace the T-37A and T-38. As its predecessors, its design was widely used by the automobile units and mechanisms. The engine and transmission were located at the right side, so the tower with the DShK and DT was shifted to the left side. The tank hull was made of rolled armor plates connected by rivets and welding. The undercarriage of the vehicle consisted of four rubber-tions of rollers on Board with individual torsion bar suspension. For the movement in the water in the lower part of the stern of the hull was installed in a niche of the couple-trehlopastnye screw and two vodorodnoe the helm. By June 1941 the Red Army had 220 tanks T-40. However, the first fights showed the lack of weapons this tank, as it mostly used as reconnaissance and for direct support of infantry. As floating it has almost never been used.

Since August 1941 the design of the T-40 was introduced a number of changes aimed at simplifying the structure. 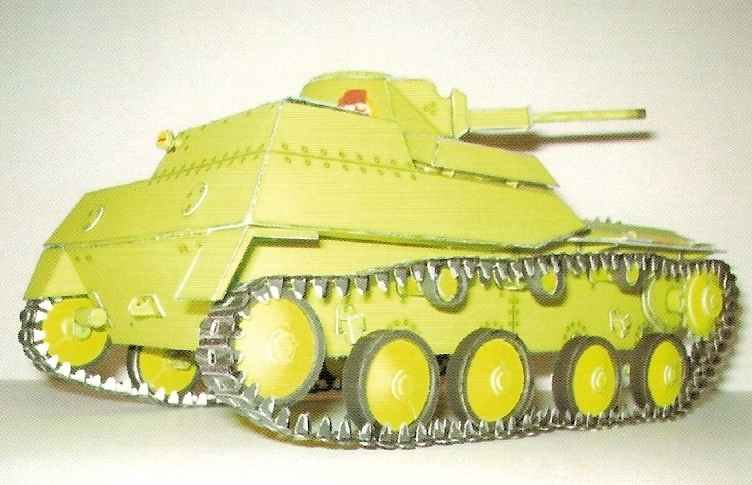 The aft hull began to make direct, without the niche of the screw, and due to the weight eliminated vodorodnoe units to increase the thickness of frontal and side hull plates from 12 mm to 15 mm, and the thickness of the sheets turret boxes, the side of the turret and masks of the paired device is up to 20 mm. case Design, with regard to the wartime conditions, become more rational and fully welded homogeneous armor.

The rest of the tank remained unchanged. As this option during the development period wore factory index “030”, then the tank received the designation T-30. However, the name of the T-30 is not stuck, and in the army, and in statistical reporting, the tank is still called T-40. From September 1941, some T-30 installed 20-mm automatic cannon tnsh-20 (ShVAK-tank). Gun ammunition was 750 shells. 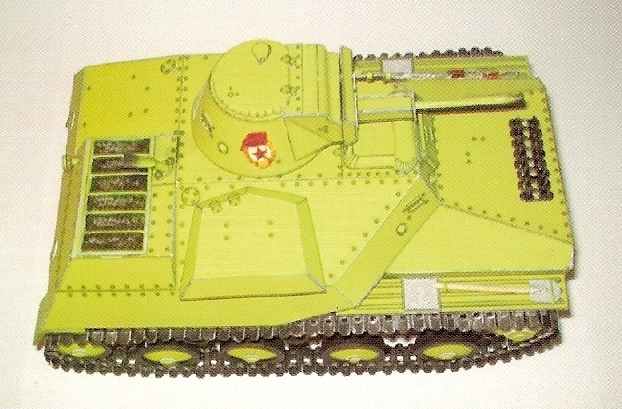 We will assemble a paper model of light Soviet tank T-30. For the model we will need: cardboard thickness of 1 mm – A4 sheet. When assembling I used microguru from Shoe boxes. Sheet of cardboard with thickness of 0,5-0,4 mm – A4. Paper clips, it is better to buy a whole box of paperclips would need to build trucks. Toothpick – handle shovel. A piece of antenna cable with a length of 10-12 cm From it we do cable. The glue I used 3 types: nitrocellulose UHU that was used for the main work, stationery PVA, for gluing parts on cardboard, and finally super glue to strengthen joints and fixing the axes of the rollers. Use for basic bonding PVA would not recommend this adhesive is water-based, after gluing the paper may warp. If You failed to find UHU, suitable conventional glue mark POINT.

Before you begin look carefully at the Assembly drawings, understand the sequence of parts installation. First try on the item in dry, look at how it is on the model, and then attach. 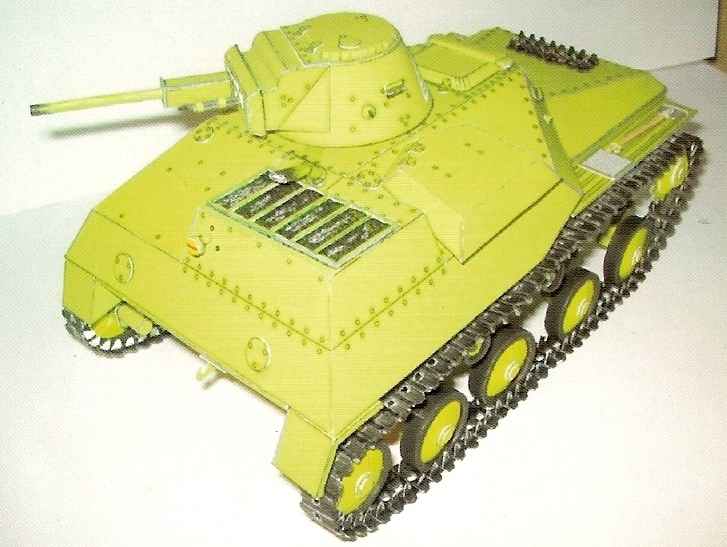 Frame model is going method in the seam of the items marked К01-К08. After assembling the frame, I taped the joints with PVA glue. after the glue has dried, the frame is ready. Next is the Assembly of the housing. The housing is assembled from parts 1-6. On the parts before cutting, you should hold the bend lines empty ballpoint pen. Gathering the body up to stage E, into the insert frame. The frame is first glued to the upper part of the body, then promazyvayut glue the bottom part of it. Case closed. Only after that is gluing the petals to the upper and lower half of the body. At this point You have finished the body of the tank. I want to draw Your attention to exposed white stripes – the ends of the paper. The best way to get rid of them is to paint them with watercolor pencils right colors.

The marker is too intense for these purposes. After assembling the hull I recommend to start the Assembly of the supports of the rollers and the rollers themselves. Exercise is very laborious and tedious. How exactly will you gather support rollers will depend on the appearance of a model. I offer 2 versions of the Assembly. First, when we glue rollers tightly. And second, I think more interesting, though time-consuming – with moving rollers, it will give the movement of the caterpillars. In detail we can consider the order of Assembly in the diagrams. Draw Your attention to the Assembly carrier roller: details 29-30-31 novice modelers will be difficult to gather, so you can replace it with wound tape. The ribbon later be painted black. For paper tape length is 45cm.

Collect first the Central part of the rink, then nakataya him the tape, fluff it with glue. We turned the tank on rollers.

Now for the tower. Items 12 and 14 must be pasted into the part 11 hectares podliza. The top is glued to the item 101. Assemble the turning mechanism of the tower, attach it to the body, better than superglue. Put the tower. Ready. This mechanism will allow to remove the tower that you may need when covering model Matt wood varnish. Left to collect the detailing of the model. Please pay special attention to the hatches. Parts are cut along the contour and glued back to back, pre-sformovat side. Ready the hatches are in place.

Special attention and complexity in Assembly will require the trucks. Bringing together the tracks connect them with paper clips. Caterpillar will be moving.

It remains to secure the shovel and the rope. The cable is better to collect metal braid of the antenna cable, and secure wrapped loop. Place them on the ground. Your model Soviet light tank T-30 is ready! Success… 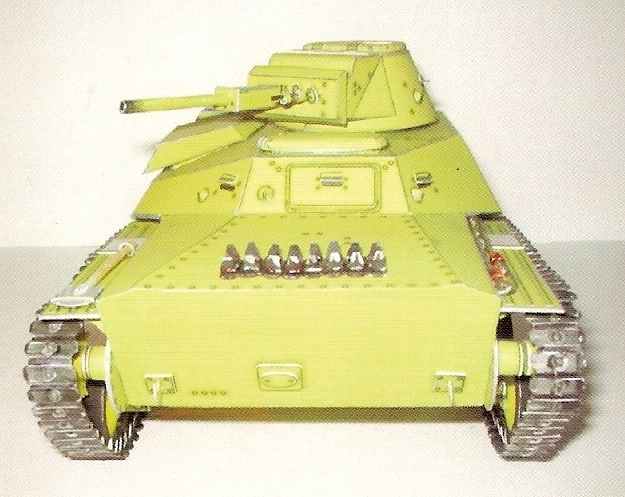 Forehead and side of the body 15

The bottom and roof 6

Cruising on the highway, km 300