We have previously described a pretty complicated path of development of the French submarine fleet before the First world war (see “M-K” No. 4 of 2014), consisting in the infinite “adjustment to the ideal of” small series of submarines that are created by different designers, had sometimes opposite views on what should be an underwater vehicle, using a variety of engines. But they have all been very far from ideal, and often just a little efficient. Although gradually emerging common to all ship builders in different countries the idea is pretty universal large boats, the French version of the fatal August of 1914 looked still very indistinct.

In the end, the beginning of the “great war” France had a fairly large number (36 units in service, plus 16 in reserve) submarine fleet, but its quality and fighting capacity has caused significant doubts from the admirals. And no wonder: despite the undeniable bravery of the commanders and crews of the submarines loss was considerable and the success is wholly irrelevant.
After the outbreak of hostilities, when the country was pushed to his capital and was forced to focus all efforts on the war on land, things got even worse. As indicated by the fact that of the 20 units that were under construction from August 1914 to November 1918, was able to Commission only half. Not even to mention the hundreds of German units, the French are far behind according to this indicator, not only from Britain but from almost not to fight the United States. The Republic was able to overtake even the traditional neighbor-rival – Italy (though in the war they were allies, but in the future as in the past, the rivalry has not been canceled.)
The primary reason was, of course, is that France simply could not provide for the development of the fleet enough forces and means. The front absorbed in unlimited amounts of money, steel, equipment and people – all that in the end was not enough for shipbuilding. But design problems remained acute. First of all, it is worth noting that before the war the competition of steam and diesel boats faded not once. The reason was not only that, as in England, the sailors hoped to speed their “steamers”, but the shortcomings of the “enemy” of the engines (a leader in the creation of diesel engines were and remained Germany). The task of commissioning the production of reliable diesel engines, created by German designs after the war naturally became much more complicated: no one could get materials and advice. Initially the results were not very comforting. In fact, only after the end of hostilities and gain access to the technical innovations of the defeated enemy was able to overcome the “diesel” issues, and that – not all and not immediately. Initially, the French just put a trophy motors seized in Germany, in their boats, which are then acquired, if not quite modern quality, then at least have reliable move.
An interesting example is a pair of regular polyexponentially submarines, built under the project of engineer M. simoneau and launched before the fatal for Europe of August 1914. One of them, named in honor of the outstanding designer-“submariner” “Gustave, Side”, had a double-shaft steam setting, then as “Nereids” got diesel “Schneider”. Originally it was planned that the two will develop more than 17.5 node with the power mechanisms of 4000 HP “Sade”” and 4800 HP-her rival. In fact, in both cases, the engineers failed. If three-cylinder steam engine can develop 3500 HP, diesels “gleaning” exactly half power! However, during the war, even in this embodiment, in operation they performed better than was suitable for a quick dip boiler installation. Therefore, in 1920, the last “Side” dismantled and replaced by a reliable German company diesel “MAI”, taken from the captured “U-bot” “U-165”. Although they had the same power as their French colleagues for “Nereids”, 2400 HP, updated crew boats have much less of a problem, and she served for a few years longer, about a penny from the next war. 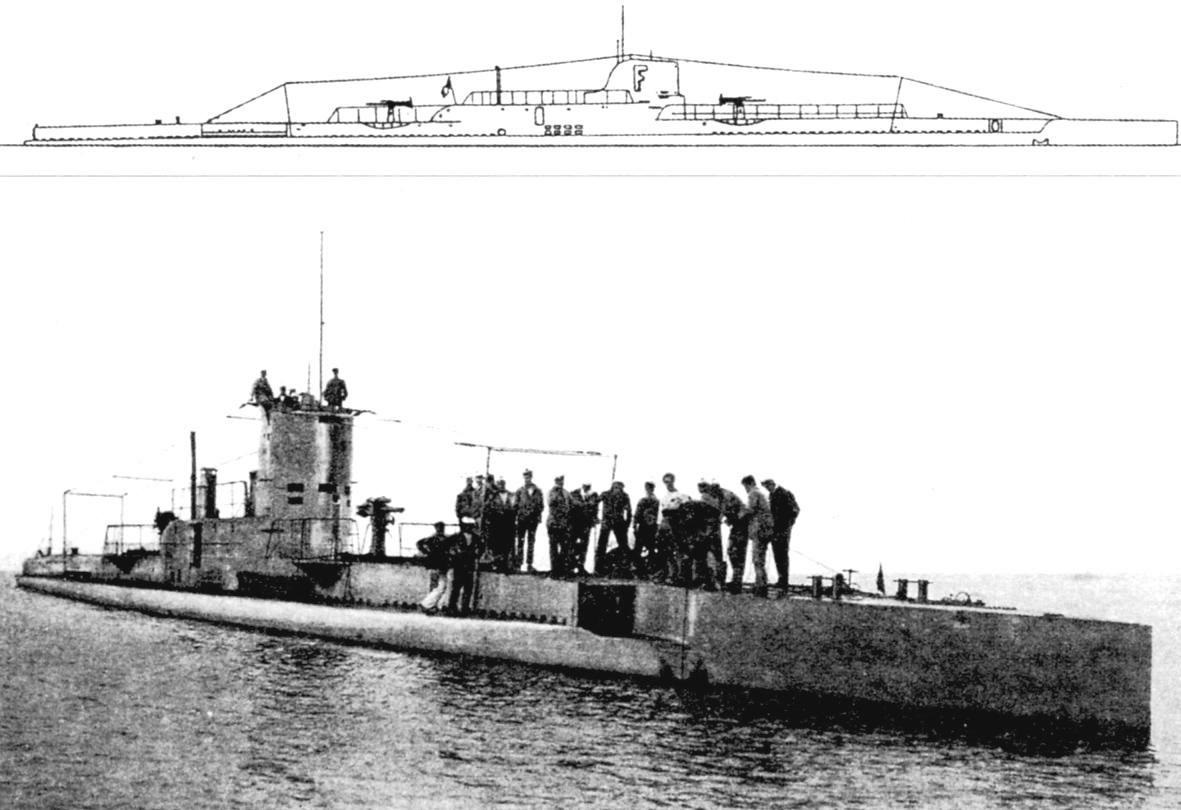 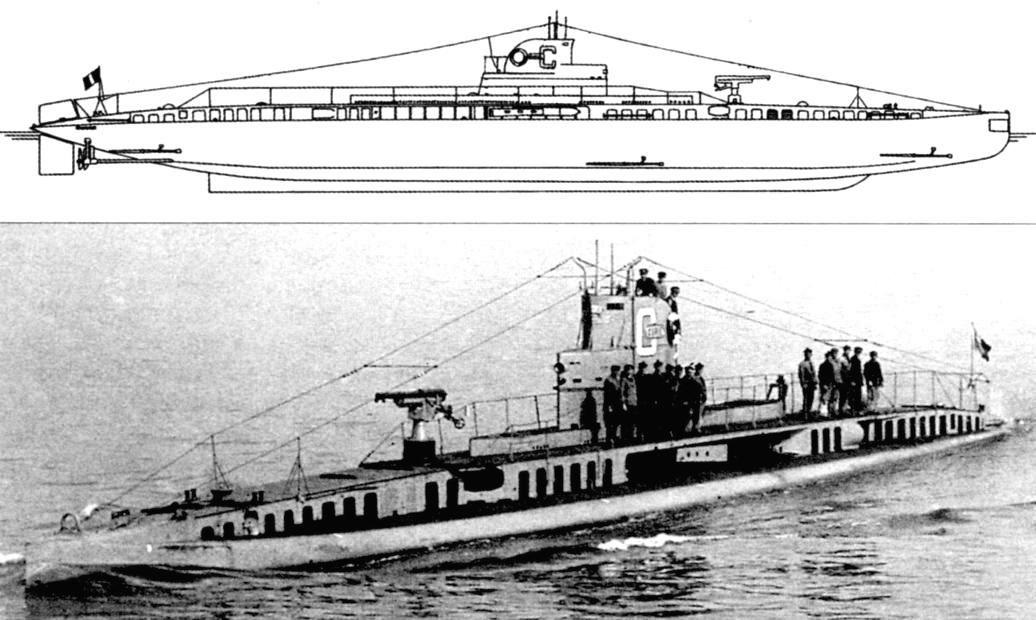 “Assel” in the late 1920s – early 1930s, Marking for felling large white letters to recognition is no longer

“Ramazotti on” practical torpedo firing in 1924 With the periscope boat – “a small problem” (as noted in the report): actually it is bent almost at a right angle. In October of the same year, the periscope had to be replaced on removed from “Sane”.

“Curie” in 1924, during the entrance of the harbour of Toulon. In the stern is seen the upper vertical rudder is a characteristic feature of this submarine
But the “Callot” got surprisingly decent for the French boats conventional weapons. Of the six torpedo tubes, four were in rugged in the nose and could shoot without any tweaks, which is characteristic for vehicles “superstructure” swivel or fixed at an angle to the axis of the boat.
The second frontier, “Pierre Chailly” with torpedo tubes, the situation was considerably worse: on the nose could shoot only two, yet the same was a turning point. But he had more powerful artillery in the face of a 100-mm gun is 75 mm at the “Callot”. And, most importantly, here’s mine engineers have hit the mark. First, they were already as many as 40 pieces, second, the engineers of the company “Norman-Pheno” who built the boat, not philosophize slyly and placed them in individual mines outside the hull, a pair in each, one above the other. When setting to preserve the balancing of the boat mines were issued a kind – pairs: the first of the remaining closer to the nose on one side plus the latest from the nose of the remaining on another Board. Oddly enough at first glance, this system proved to be quite successful and reliable. She was the inspiration when drafting new post-war submarine craft.
But, generally, both “unpaired” units of particular interest for France and the history of shipbuilding is not present. Perhaps, it is possible to note a strange mess with the names. “Callot”, was named in memory of the commander of the “Pluviôse”, who died along with his ship, which sank in 1910 in the accident. His name was Pierre-félix-Maurice, so logically enough the boat was originally called “Pierre Callot”. But then, for unknown reasons, now anyone renamed “Maurice Callot”, in last name immortalized in metal submariner. And “Pierre Chailly” on almost the same grounds initially was called “Paul Chailly”. And as such, the boat appears in some very solid guides and books. “Almost” – because Field-Etienne-Pierre Chailly from the beginning used the last name. And the story of the “nominee” deserves separate words.
Let’s start here. The fact that in addition to the 10 units, officially received in the division of the German Navy, the French included in their real battle trophies. One of them was the German “UB-26” caught in flat networks anti-submarine boom and attacked the old destroyer “Clot”. Only in this way the success of the French PLO could not be sustained: instead captured by the crew of the boat tried to tow it to port, but she sank on 20-metroi depth. However, “UB-26” raised. She was named Lieutenant Roland Mario, and entered into operation more than a year before the end of hostilities.
And in 1918 the fleet was added to the “immigrant”: the returned home from Austria upgraded there, “Curie”, which immediately became the best submarine of the war, sailed under the tricolor flag. It was during the seizure of her Austrian 22-year-old mine officer Lieutenant Pierre (or if you like, Paul), Chailly was severely wounded and was captured. But after the war, he, like the submarine, has returned home. Moreover, in the ranks of Free France, he participated in the following world! And there the gallant officer, whose age was close to sixty, it is highly symbolically given command of the submarine… “Curie”. Of course, the new type “V” of the British buildings. And after all, this appointment did not become formal: the boat really fought and deserved the two Acknowledgments in the order. A 59-year-old Chailly, now a Lieutenant, got his “war cross with palm”.
Interesting career. Each country can find its heroes-sailors, even if its Navy in General, and underwater in particular, showed themselves in the First world without any Shine. And material part, as we have seen, was in considerable decline. The former in the beginning of the century one of the clear leaders, France is significantly lagging behind the leading “colleagues”. Now she had this gap to be bridged.
V. KOFMAN