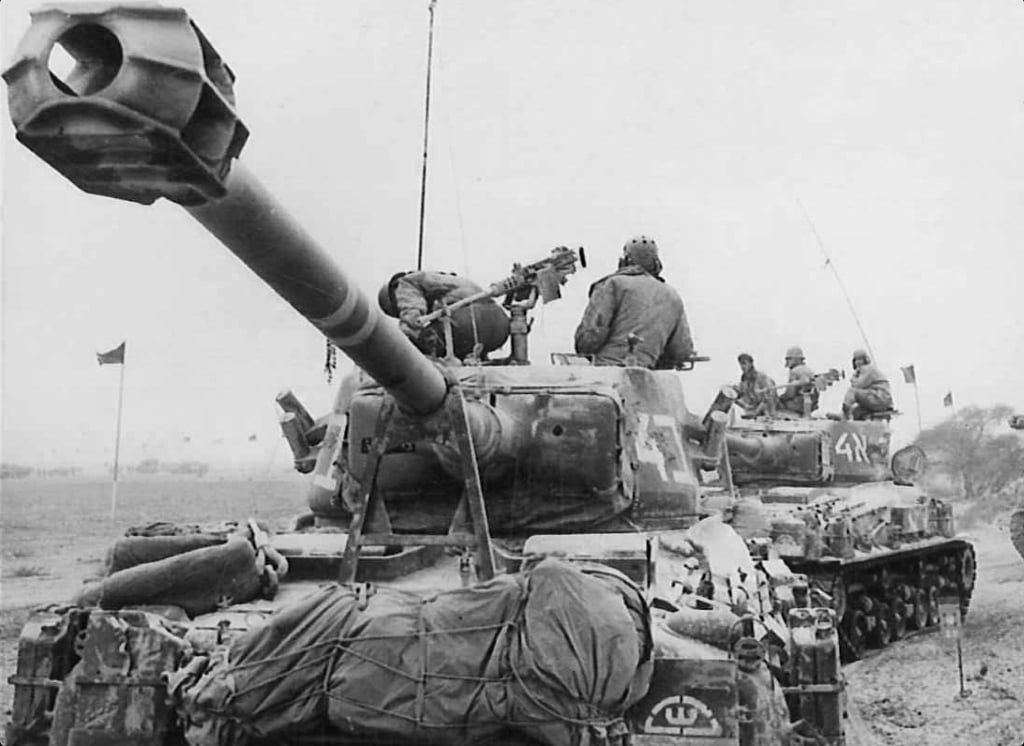 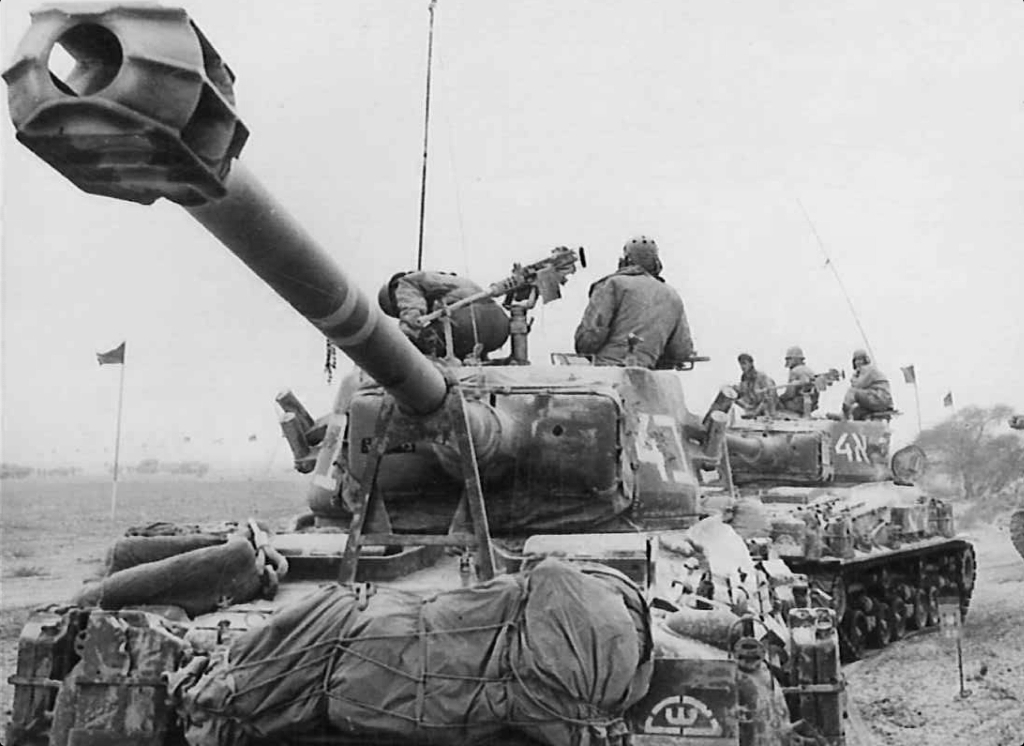 After the Second world war, the army of the victorious countries have experienced a surplus of armored vehicles. Most directly it was the most massive tank of the Western allies, “Sherman”. Suffice it to say that by the end of the summer of 1945 in the army of the coalition, there were about 20 thousand military vehicles of this type. It is quite natural that from such a number of tanks, which has become unnecessary in time of peace, it was necessary to get rid of. Alternative to send to the smelter, which is also widely practiced, was the transfer or sale of tanks to other countries.

As for the army of the United States, in its Arsenal a number of “Shermans” was until the mid 50-ies, and these tanks took part in the war in Korea. In the post-war years they formed the basis of the armored forces of most NATO countries, and in addition, many States in the Middle East, Asia and Latin America. “Sherman” were widely used in colonial wars and regional conflicts of those years.
In the first half of the 50 years they were used by French troops in Indochina, as well as the regime of Batista in Cuba against the rebels of Fidel Castro. By mid-1959, the guerrillas of Fidel seized five “Shermans”, which, however, in the battle, almost did not participate — they were used as an intimidating factor. Subsequently, in April 1961, a few “Shermans” in the “2506 brigade”, formed of the Cuban exiles”gusanos”, landed at Playa girón. According to others, it was the American light tanks M41 “Walker Bulldog”. However, in the landing could participate in the fighting vehicles of both types. It is important that the fate of them was similar. By that time, Cuba had already received from the Soviet Union and Czechoslovakia, several dozen T-34-85 and SU-100 and combined air operations and ground forces defeated the assault.
“Sherman” took part in the fighting between India and Pakistan in Kashmir in 1965.
At least 40 military vehicles of this type still existed in Pakistani army during the Indo-Pakistani conflict of 1971. 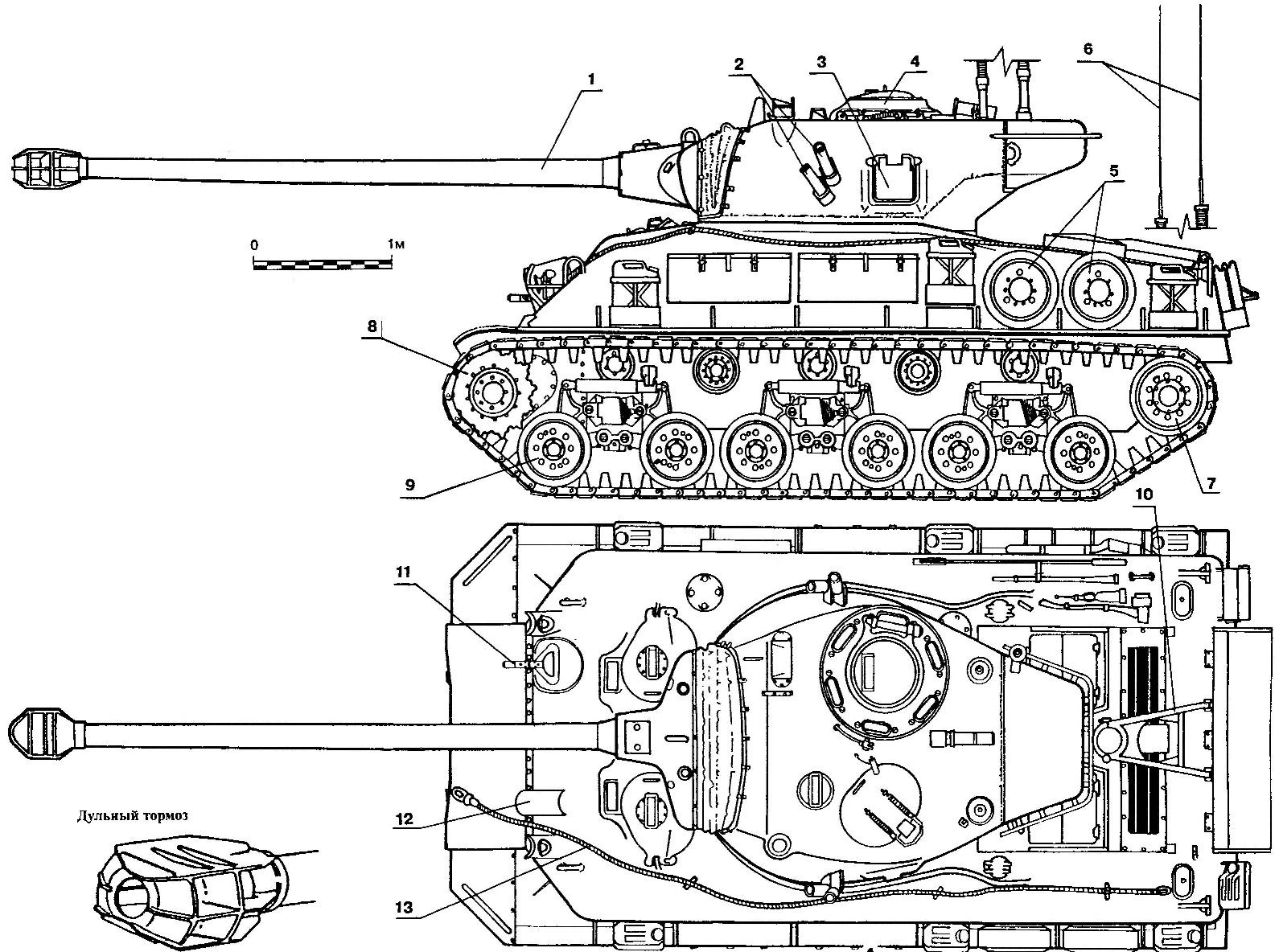 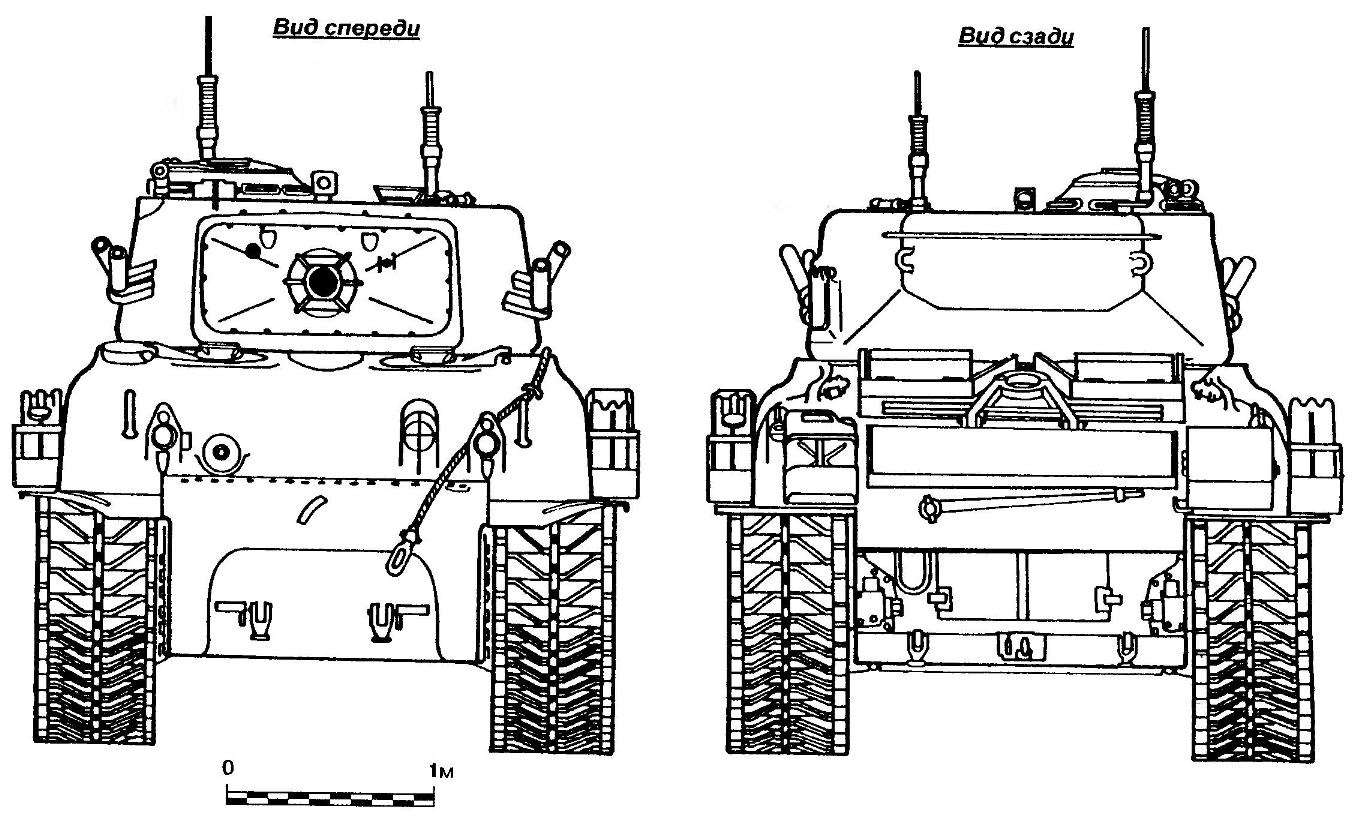 Medium tank M51:
1 — 105-mm gun; 2–smoke grenade launchers; 3 — hatch for firing personal weapons; 4 — commander’s cupola; 5 — spare rolls; 6 — antenna; 7 — guide wheel; 8 — driving wheel; 9 — support roller; 10 — a bracket of the gun income; 11 — a machine gun course; 12 — svetomuzykalny case lights; 13 — tow rope
But without a doubt, the main arena of the massive and unprecedented duration of the combat use of tanks of this type for the entire second half of the twentieth century was the middle East. And they were used by both sides of the Arab-Israeli conflict.
The first “Sherman” Israel acquired in 1948, repairing and putting in a combat system disarmed two M4A2 left by the British troops leaving Palestine. Still a few managed to buy in Italy and in the Philippines, but these machines were in unfit condition. In Italy managed to acquire an American tank 75 mm gun and 105 mm howitzer. The Israelis managed to install on the tanks even krupovskaya 77-mm guns during the First world war. “Sherman” was in service company “In” the 82nd tank battalion of the 8th armored brigade of the IDF — the Israel defense forces and took an active part in the war of 1948 — 1949 years. In the fighting in Palestine with the Egyptian side have also been involved in three “Sherman”.
The fragile peace in the middle East lasted until 1956. All this time, the parties heavily armed, including tanks. However, the purchase of armored vehicles in Israel at the time about the channels of its receipt, the number of combat vehicles there is no exact information. For example, according to British intelligence, in 1952, the Israel defense forces had 55, “Sherman”, and the specialists of the CIA reported 120 vehicles of this type.
The first large shipment of armored vehicles (light tanks 100 AMX-13, 60 self-propelled 105-mm howitzers and 60 “Sherman”) was received from France in the early 50’s, which allowed Israel to form two more tank brigades.
Along with the purchase of new combat vehicles Israeli experts have begun to modernize are already in service. The French have agreed to supply Israel with 75 mm gun CN 75-50, ballistics which was borrowed from the German “panterovsky” cannon KwK 42. Guns needed for rearmament, “Sherman”, as derived from the French light tank AMX-13 is armed with the same weapon that was not enough to counter the Egyptian T-34-85. In addition, it is possible to reduce the nomenclature used IDF ammunition. To set a new long-barreled guns had to change the design of the mask and to weld on the rear of the turret is cast counterweight. It is interesting to note that all cast parts were manufactured in France and Belgium, and then went to Israel. The war of 1956 was re-equipped with a 50 “Sherman”, mainly modification of the M4A4, which received a new designation and name of the M50 “Super Sherman”. First they formed a battalion of the 37th armored brigade. By the way, almost the same, but more simple went through the Egyptians, the setting for part of their M4A2 turret FL10 from the tank AMX-13. 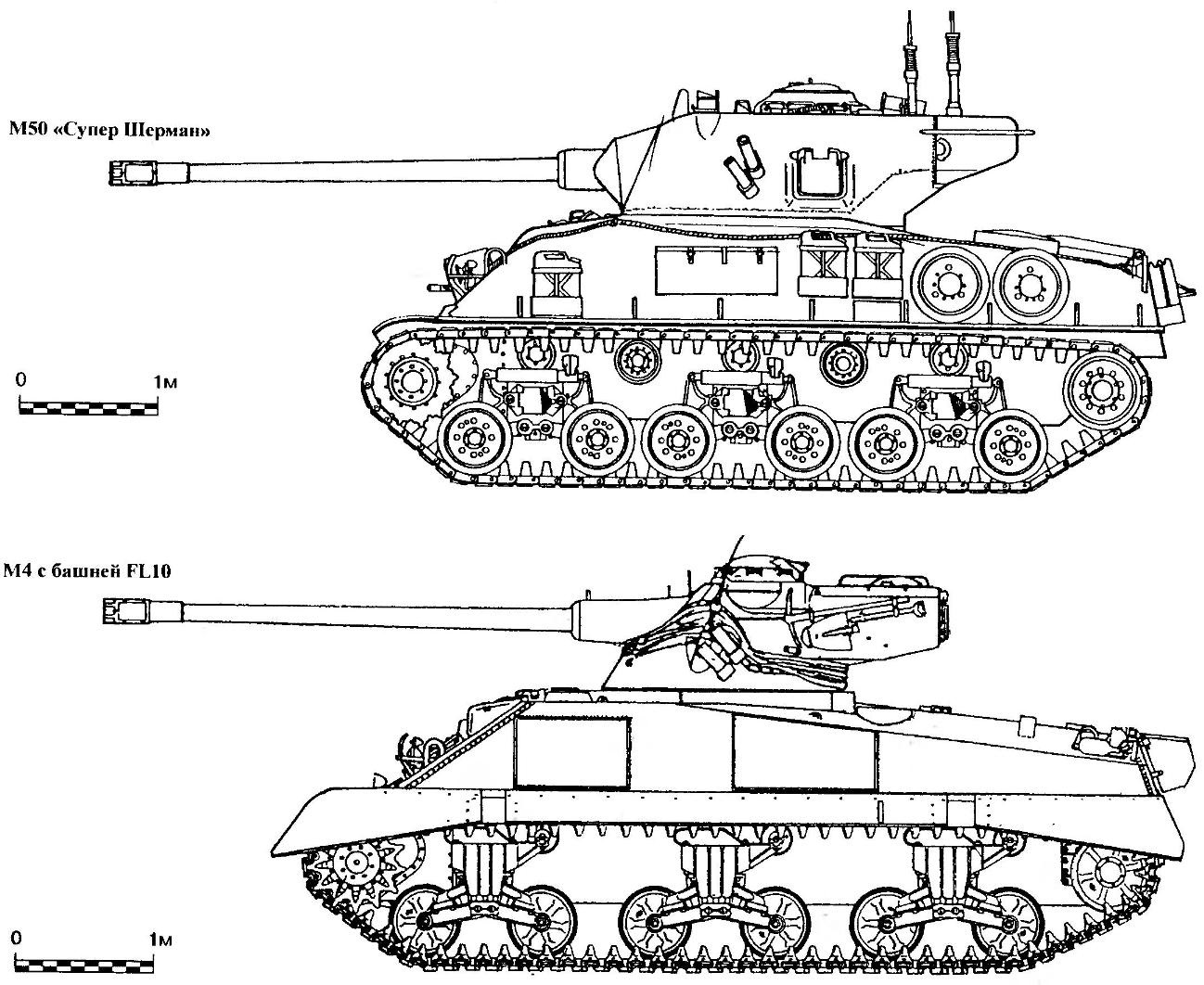 A crucial role in the fighting in the Sinai in 1956 was played by the tanks of the 7th and 37th brigades. In the area of bir-Ifhave occurred fierce fighting, “Sherman”, the 7th brigade with T-34-85 1-th Egyptian tank brigade. The Egyptians initially strong resistance, but after air strikes by Anglo-French aviation, Egypt’s President Nasser gave the order to retreat from the Sinai. During the fighting, the IDF destroyed 27 tanks T-34-85, 40, “Sherman”, 12, “Sherman” with towers FL10, 15 “Valentine”, 40 SAU “Archer”, six SU-100 and 343 armored Egyptians. Their own losses Israel was estimated at 30 tanks and armored personnel carriers.
After the war of 1956, the results of a successful action armored brigades led the Israeli leadership to focus on the development of armored forces. The number of armored brigades in the IDF for ten years (1956 to 1966) was increased from three to nine. Organizationally, the brigade consisted of two tank battalions, 50 tanks each, and a battalion of infantry. However, the tank corps was strengthened, not only quantitatively but also qualitatively.
Along with the arrival of new tanks “centurion” from England and the M48 from the United States, Israel continued to actively engage in the modernization of armored vehicles. In particular, long time experiments were conducted to equip the “Shermans” more powerful guns of the English and French designs. However our own experience was still insufficient and had to seek the assistance of the French, who proposed to install 105-mm gun, designed for tank AMX-30.
However, it turned out that this gun had a barrel length of almost 6 m and the initial velocity armor-piercing projectile of 1000 m/s, it is impossible to install in the tower, “Sherman” because of the lack of space for rollback. The gun barrel had to be shortened by 1.5 m and equipped with a massive muzzle brake, structurally similar to the brake 90 mm gun armored “Panar” AML-90. This muzzle brake has become a characteristic feature of the external tank. The initial velocity armor-piercing projectile sharp head dropped to 800 m/s. installation of the new gun required the placement on the rear of the turret counterweight larger than the “Super Sherman”.
Upgrades have been more than 200 tanks “Sherman”, mostly with a cast housing, which is considered the most suitable for the installation of heavy towers. The re-subjected part of the “super Shermans”. All tanks were set horizontal HVSS suspension, 23-inch caterpillar, American engines Cummins VT8-460 power 460 HP and automatic transmission. These tanks were called M51HV, or the Isherman (Israeli Sherman). However, worldwide, the Israeli M50 and M51 is called the “Super Sherman”.
While the Israelis have upgraded their tanks, the Egyptians got the Soviet is-3,122 mm projectile which could smash to pieces, and “Sherman” and “Super Sherman”. However, during the 1967 war these tanks in combat are not met.
The war, dubbed the “six day”, began a series of raids Israel on Arab airfields. The success was complete, and absolute control of the air managed to win a few tens of minutes. After that we went to attack tanks. In the Sinai Peninsula were mostly involved teams with “centurion”, as Egypt was seen as the most serious opponent.
The Israeli offensive on the Jordanian front began on 5 June. Two companies of “Shermans” was supported by the Israeli infantry in Jerusalem and the 10th mechanized brigade (a battalion “super Shermans”, battalion “centurions” and a battalion of AMX-13) operate to the North of the city. To stop the advance of Israeli parts, the Jordanian command tried to organize a counterattack along the road of Ramallah — Jerusalem forces of the 60th armored brigade, armed with tanks M48. Israeli aircraft foiled this plan, confronting Jordanian units a bombing campaign. However, part of the 60th brigade has managed to get to the front.
In a mountain defile played out battle with over 100 “super Sherman” and the M48. While firepower was created in the late 50-ies of the M48, armed with 90-mm guns were inferior upgraded “Sherman”. Within hours, both sides could not bring the survivors from the battle tanks or to enter into battle reinforcements, as the road was busy with broken appliances. Salvation for the Israelites was the battalion 120-mm mortars mounted on half-track armored personnel carriers. The mortar managed to organize a solid a curtain of fire and burn 22 Jordanian M48, trying to get to the battlefield. The loss of these machines has undermined the morale of the Arabs. Victory in this battle was a key moment in the development of the fighting on the Jordanian front. By the end of June 8 the part of the IDF came to the Jordan river, completing the set tasks.
After 1967, the “super Sherman” was taken in reserve, but in 1973 during the war “judgment day” they are again needed, when the Egyptian army broke through the front in the Sinai Peninsula. The huge losses in tanks has forced Israeli commanders to throw into battle reserve tank brigade. Some of their battalions were armed with battle machines of this type, which is already with great difficulty could resist the Egyptian tanks T-55 and T-62 Soviet production. 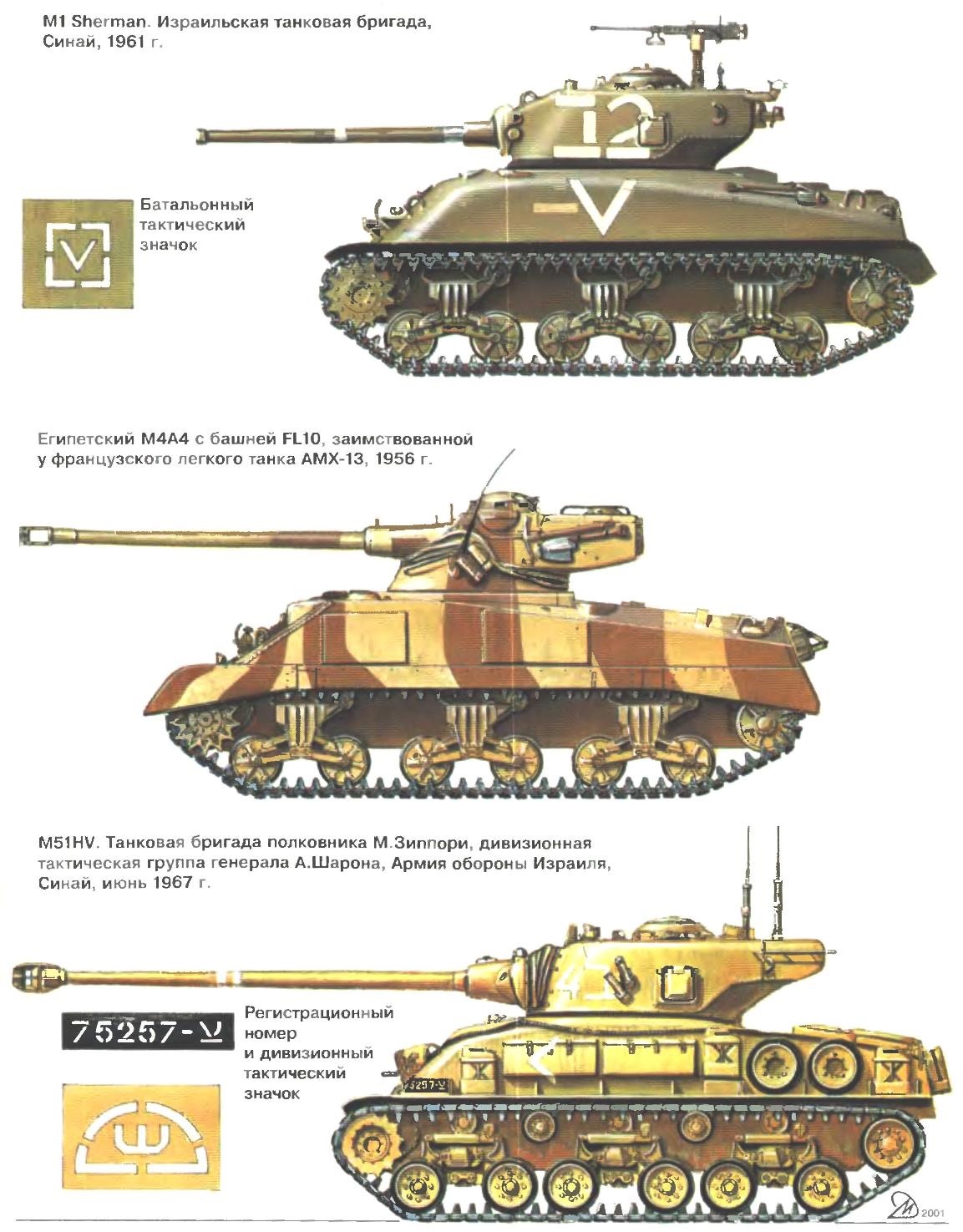 A similar pattern was observed on the Syrian front. In this regard, it is interesting to mention an episode that took place during the fighting on the Golan heights to the South of Quneitra. Here to 9 October, on the third day of the Syrian offensive, the Israelis were able to take the initiative in their hands. Part approaching 4th, 9th and 679-th reserve tank brigades counter-attacked the Syrian 9th infantry division. Despite the fact that the attack was repulsed with heavy losses to the Israelis, the Syrians were forced to go on the defensive. At this time the Israelites entered the battle tanks of the 205th reserve brigade, the attack of which made the events of the Second world war, not only intensity, but also technique, taking part in it. Armed with the 205th brigade was upgraded though (М51HV), but still “Sherman” and the fire on them were self-propelled SU-100, which was equipped with anti-tank battery of the Syrian infantry units.
After the war of 1973 “super Sherman” again brought to the reserve. In the early 80-ies a number of tanks were transferred to the “army of major Haddad” in southern Lebanon and the Phalangist militia in Beirut and took part in the civil war raging in that country. A small number of combat vehicles Israel sold to Uganda and Nicaragua. In the latest “super Sherman” participated in the battles with the guerrillas, the Sandinistas. The remaining 150 tanks M51HV in the early 90-ies was sold to the Chilean army. In Chile on tanks installed more modern diesel engines and operated almost to the end of the century, replacing them with more modern “leopards”.
M. BARYATINSKY