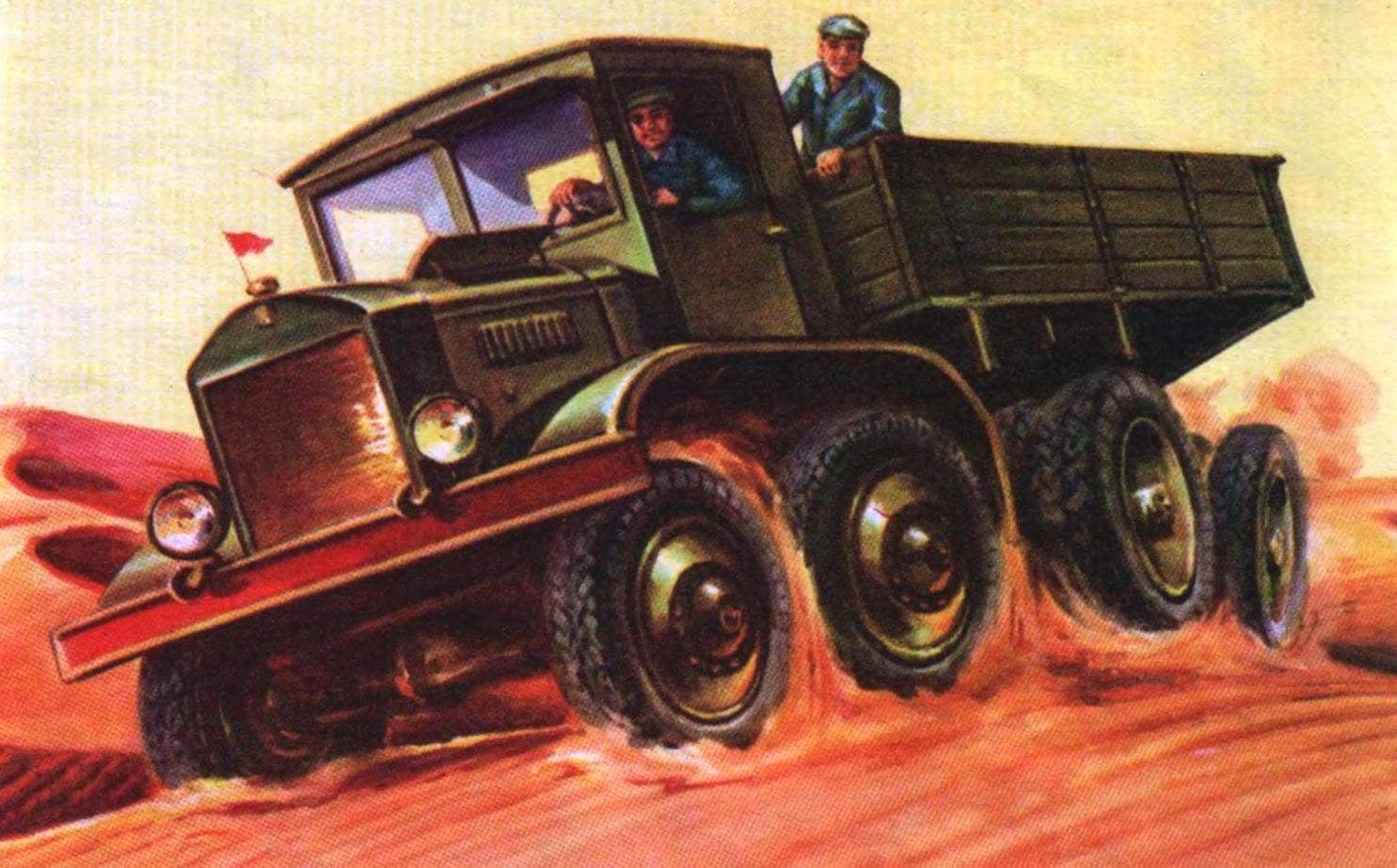 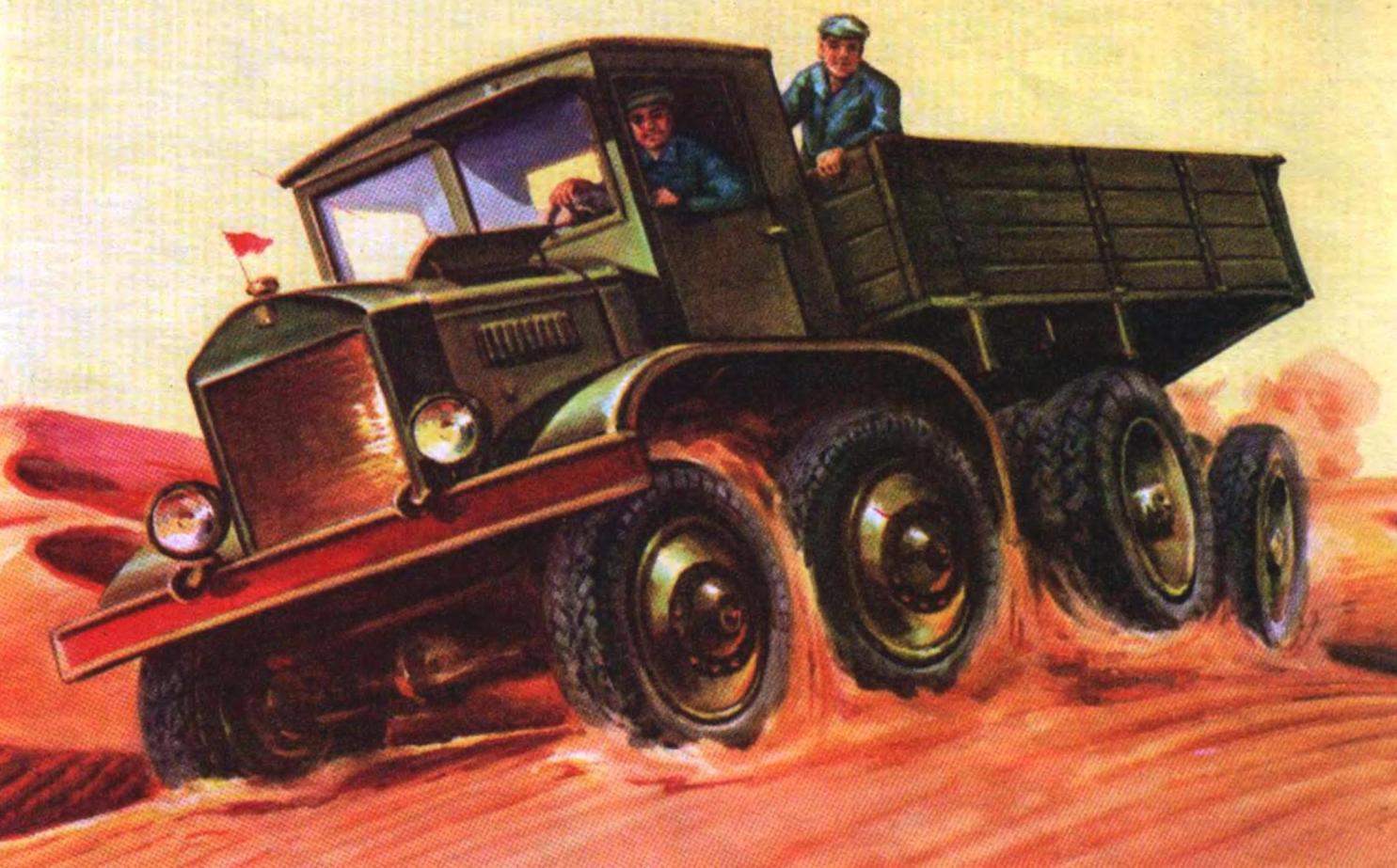 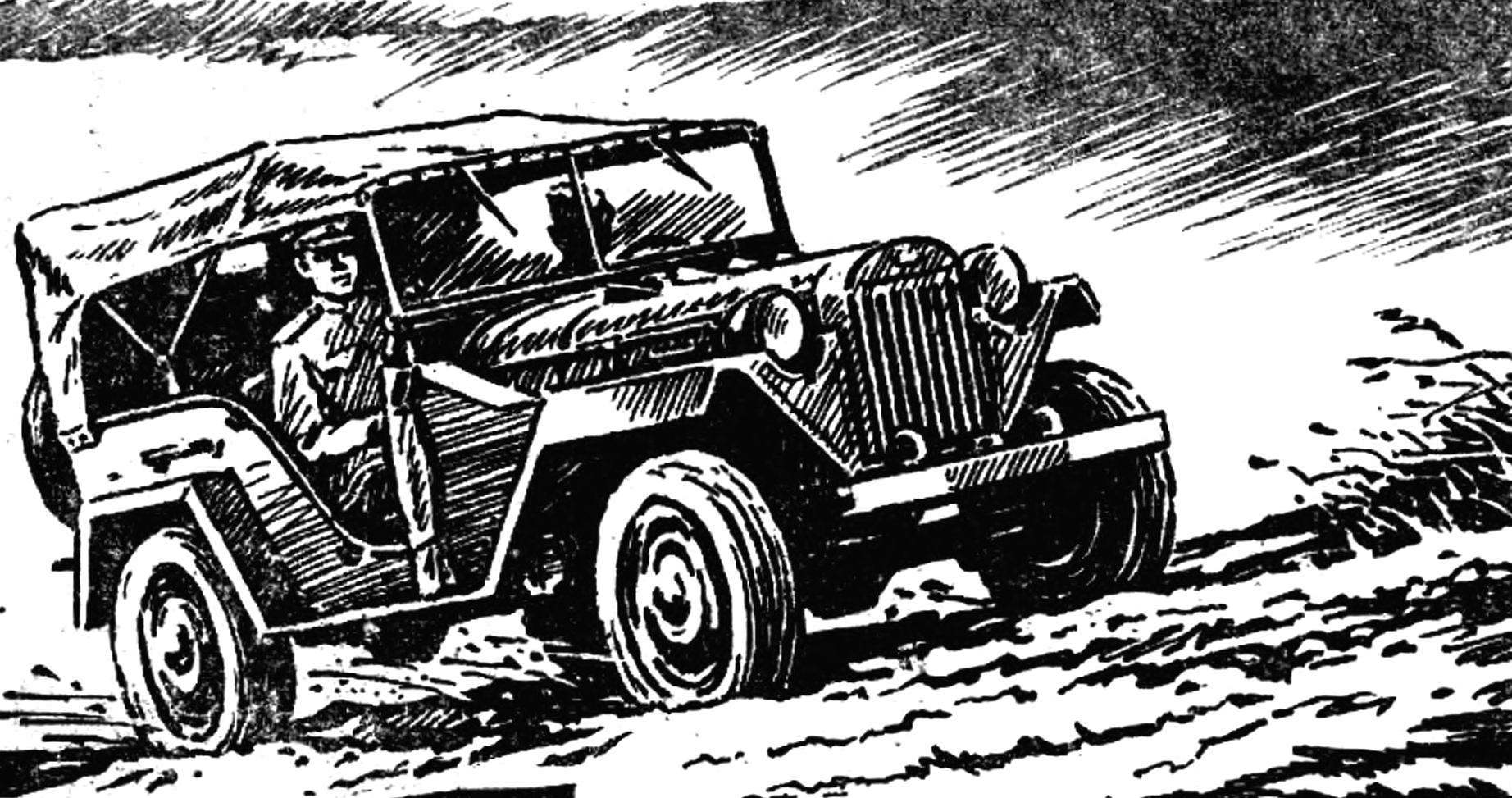 History of the machines is often dramatic way design searches, bitter disappointments and victories. In this respect, the distant past off — one of the most interesting pages in the development of the car. Even briefly getting to know her, convinced of the validity of the old and wise sayings: “Everything is already someone once invented.” Indeed, we think the modern powerful vehicles with high cross — the fruit of creativity solely by our contemporaries. But it is not.
As soon as first horseless carriage, as the design ideas flowed on how to get it to overcome steep slopes and swamps, snow and sand, to swim across water obstacles, in short, as to free it from the road! Was born “crazy” construct — forerunners of modern off-road vehicles. Some of them forgotten, left only a blind prints on the yellowed pages of old Newspapers and magazines; others were destined to become the ancestors of many modern machines. Among them were such over which the contemporaries laughed, drew them cartoons. But as time passed, the attitude of designers to the principles of increasing the patency of the car, new materials and processes — seriously began to think about the “ugly ducklings”.
Our story about the history of wheeled all-terrain vehicles on one of the most interesting stages of its formation up to the second world war.
Today it is clear: the main and essential condition of performance car-a vehicle drive to all its wheels. Only in this way can provide a high coupling quality and traction. In the last century inventors rather intuitively came to that, then science has confirmed and theoretically justified their conjectures.
The first vehicle with drive on all four wheels, built in 1826, the British T. and J. Burstall. Hill. It was a cumbersome steam coach, not intended for travel off-road: just the roads themselves were in such a state that without a four wheel drive could not do. That’s why the Rover this stage can be called only with great reserve.
The first car with all-wheel drive designed to travel off-road, suggested that our compatriot A. Brady in 1863. He constructed something similar to the engine: a kind of pot-bellied boiler with a high chimney mounted on large metal wheels. At the same time Brady has developed the project “ice flow” — steam ski carriage for movement on ice and compacted snow. Behind him was reinforced driving gear wheel, which, by concentrating on snow or ice with sharp spikes that moved this unusual crew. He, obviously, you can start counting the history of snowmobiles.
All further development of wheeled all-terrain transport was already on the path of development and improvement of actuator, combined with than other ways of raising cross; about some we have already told (see “M-K” No. 6 of 1976).
The first four wheeled petrol car with all leading axes (wheel formula 4X4) was the world’s first armored car built by the Austrian branch of the company “Daimler” in 1903. With the weight of 2 tons of the armored car speeds along the road to 45 km/h.
In 1907, the same firm has designed two prototype with all-wheel drive, which together with other 22 trucks in the composition of trucks and trailers made a test run in Germany with a length of about 1000 km and demonstrated its great potential. 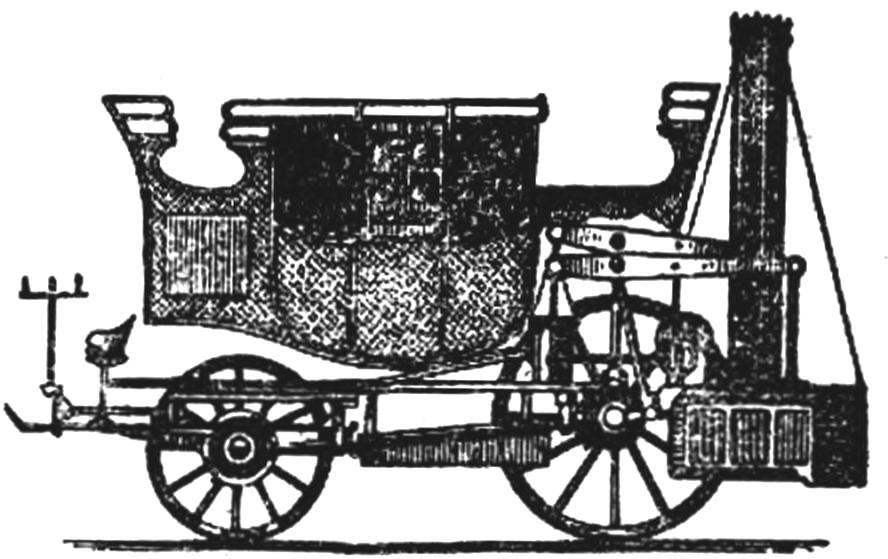 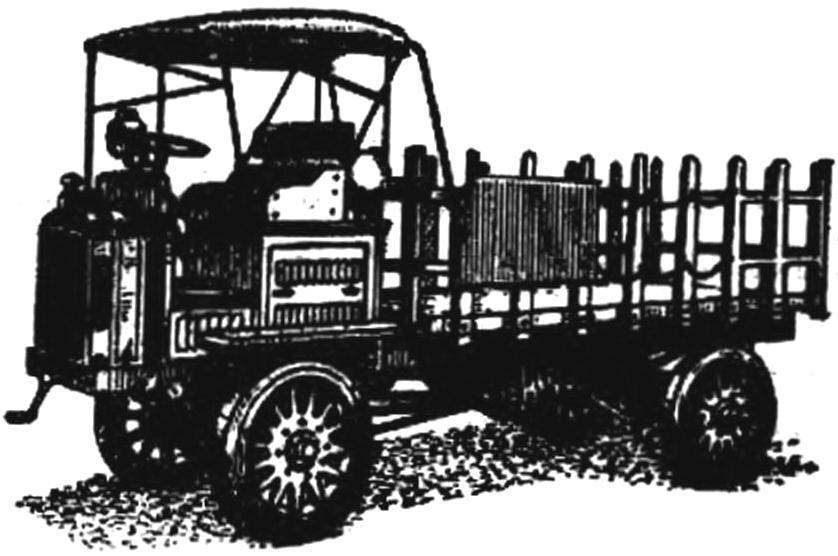 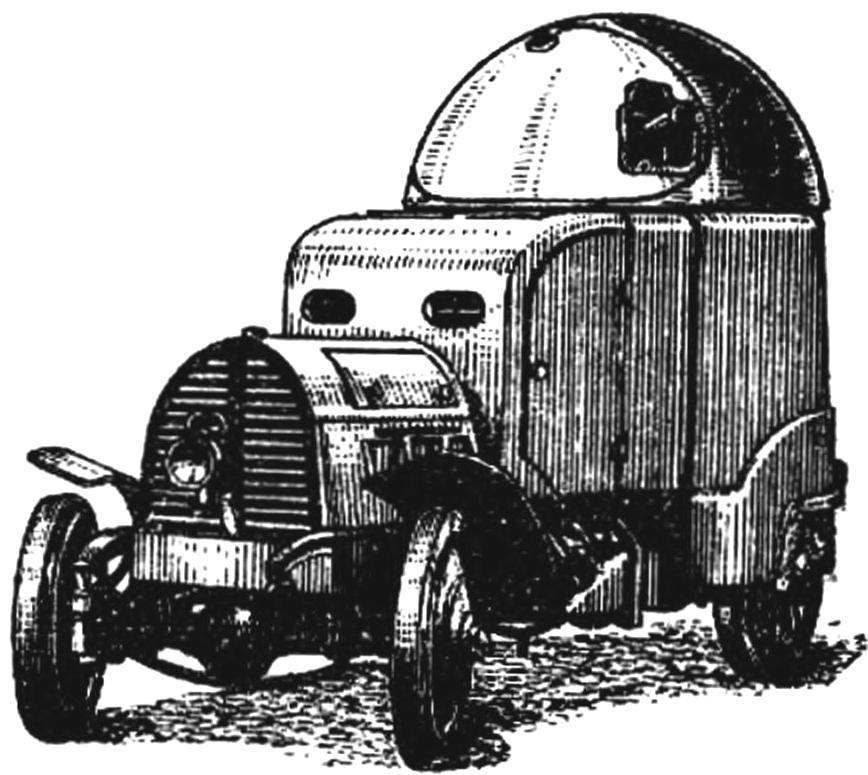 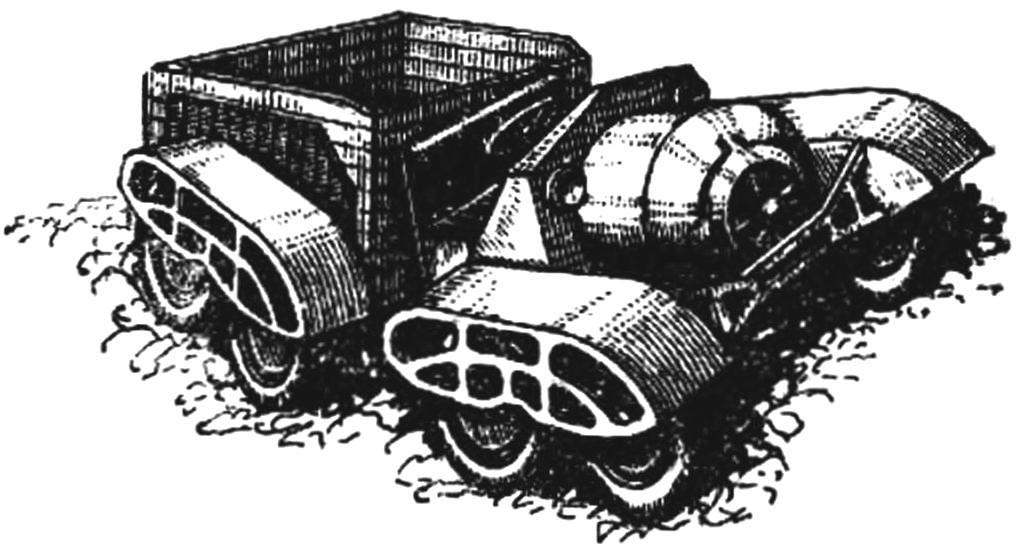 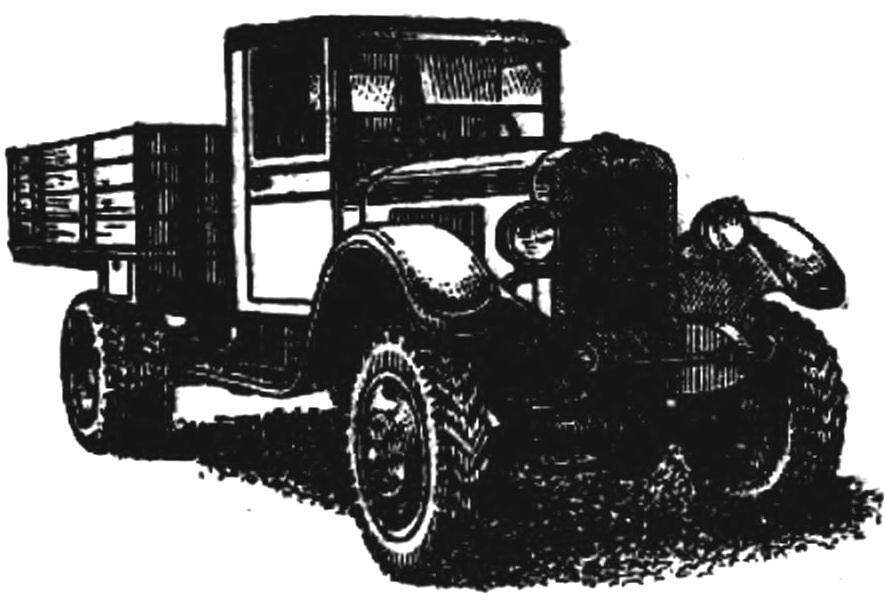 Diagram of the device the articulated all-terrain vehicle (“Pavesi-Fiat”, Italy).

Experienced chassis for armored (Germany, 1927-1930).
Only a year later, the firm “Leyland”, introduced the first British all-terrain vehicle 8X8. His own capacity was a mere 3.5 MT, however, given the high traction qualities, the car used two 4-osname trailers with loading capacity of 6 t On the “Leyland” stood 6-cylinder petrol engine capacity of 105 HP and with All-wheel drive was leading and managed. In Germany the first prototype diesel truck “Mercedes-Benz” 8X8 appeared in 1936. At the same time, the English firm “Zaurer” started the production of trucks with a lifting capacity of 8 tonnes with an engine power of 135 PS
The design idea is not limited to four axes. “Bussing” in 1928— 1932 was designed and built by an experienced floating patieny car, or rather the chassis, with an unusual wheel formula 10X10. This machine was so complex that further work on its improvement refused, although all-terrain qualities, it could be equal with track machines.
All these all terrain vehicles are based on standard cars, therefore the greatest interest are those samples which had already been laid and other important principles to increase permeability. One of them is the presence of articulated frame ensuring superior grip of each wheel with the ground under conditions of rugged terrain and increase agility. The management of such a vehicle is accomplished by changing the angle between the front and rear sections.
This principle since the early 20-ies started to develop the Italian engineer Pavesi. He built a whole range of articulated vehicles: army transport vehicles, tractors, armored cars and even light wheeled tanks. Of course, in those years it was impossible to conceive of the use of hydraulics for this type of machine. It is known that modern of these machines the angle between the two halves is changed by means of hydraulic cylinders. And in those days! The solution was found in using simple gear mechanism the rack and pinion type. One part of it stood on a semicircular traverse front frame, the Other on the back. Both half-frames are pressed to each other with steel I-beam, reinforced in the sections of the machine. The engine and transmission was located in the front and torque to the rear section is transmitted through the propeller shaft. The wheels were enlarged diameter, steel, with massive tires or metal cleats.
The first four-axle machine with articulated frame and all wheels were built in England in 1933, by order of the military. Three years later, the English firm “Armstrong Siddley” also suffered a similar vehicle and got good results, but the complexity of the design did not allow to swing their production. Work was carried out to establish such a Rover spacecraft, conventional lorry and us. Despite the promise of these machines, the difficulty of establishing a Central joint wheel-drive rear section pushed their further development in our days.
Not once we mentioned SB one way of increasing the patency of installation of wheels of increased diameter. The designers of the Rovers was well aware of its importance and developed this principle from the beginning of the century. For example, the first artillery tractors “Austro-Daimler” type M16 and M17 sample 1914-1918 stood steel wheels Ø 1.5 m, and the towing vehicle “Durkopp” wheel diameter reached 3 m. This greatly increased their conductivity in comparison with standard machines. But the special off-road vehicles with giant wheels, still was not so much the more constructed and operated. Their ancestor can be considered to be a three-wheeled tank Russian inventor captain N. N. Lebedenko. He reminded gun carriage, the front rests on two large wheels of the Bicycle type with a diameter of 9 m. Each of those rotated the engine power of 200 HP the Weight of this giant, nicknamed “king-tank”, has risen to 40 in the Back so he relied on a small rink, which became his Achilles ‘ heel: one of the first tests of the ice rink, firmly stuck, and decided the fate of the machine. Giant self-propelled structure was dismantled.
The same scheme we can easily guess, in the other a huge machine built by the firm “Hansa-Lloyd” in 1917 for use as an artillery tractor. The power unit and the driver was sandwiched between the leading two wide rollers Ø 3 m, a third small wheel is only used to maintain frame. In the same way during the second world war and Germany was built several heavy-duty tractors for pulling tanks.
E. KOCHNEV