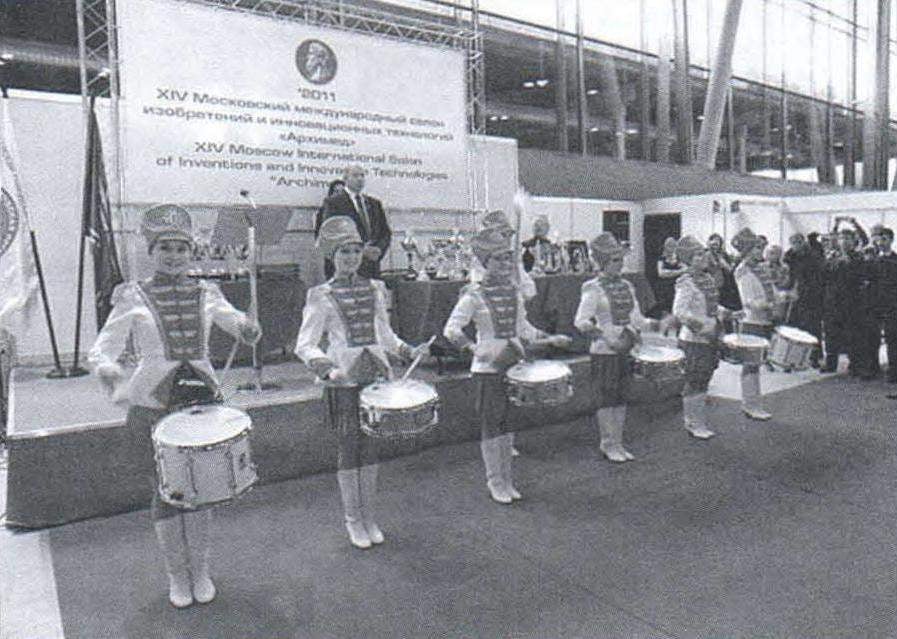 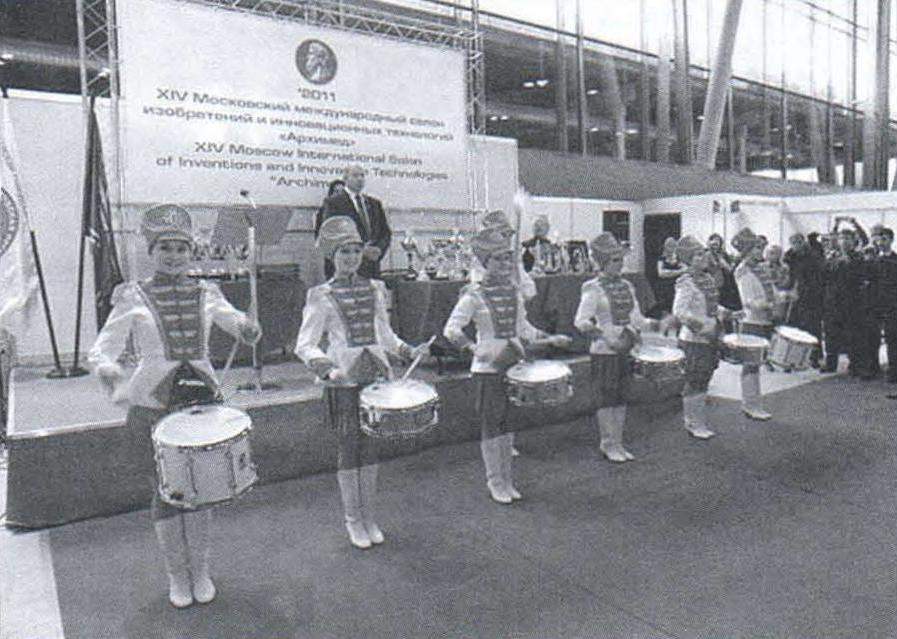 From 20 to 23 April 2012 in Expocentre “Sokolniki” was held the 15-th salon of intellectual property “Archimedes-2012”. Except the Russians of the 42 regions, was attended by representatives of 18 countries of near and far abroad. The exhibition featured over 1000 inventions from various fields of human activities: from military science to health, from hand tools to nanotechnology, from children’s toys to space technology. The main organizer of the salon – Center for promotion of invention and rationalization of VOIR with support of presidential administration and the government of Moscow.

Unfortunately, at this time exhibits of transport equipment turned out to be quite a bit. But there were a lot of other useful technical developments. The most interesting of them present to our readers.
Photo 1. Sports boat (hydroplane “on the contrary”) was a Latvian inventor Uldisa of Atmata from Liepaja drew the attention even of those who are indifferent to the technique. In appearance it is a single vessel with an elongated body, similar to the aircraft fuselage, with cabin, closed lantern in the back the sides are short (small scale) wing. However, the engine of the glider is the propeller. Its location is also unusual: not in the stern, and behind the redan, almost in the nose of the glider. Feather helm – three: one near the screw on the right, and another two under the ends of the cantilevers, they provide good handling at speed, and stability on the course.
The engine apparatus – Honda, four-cylinder, liquid-cooled, modernized and boosted up to the power of 110 BHP, a decade ago (earlier rules prohibited for this class sports vessels). He mounted, as on most cars, in the bow (in the forepeak). The exhaust pipes go under the wing, creating more lifting force on the stern of the boat.
Body – fiberglass, tubular frame, the wing is plywood.
Photo 2. Sculpture “mechanical fish” art group ArtMechanicus.com from Moscow region Fryazino attracted the attention of visitors not only meticulous finishing of items (all items are handcrafted with cutting-edge technology and finishing), but their movement: tail, fins, mouth and even eyes. Fascinated by the mechanisms of the quickening of these man-made inhabitants of the underwater world. All the gears, rocker arms, levers located on the site of the internal organs of the fish, but fully accessible to the public. 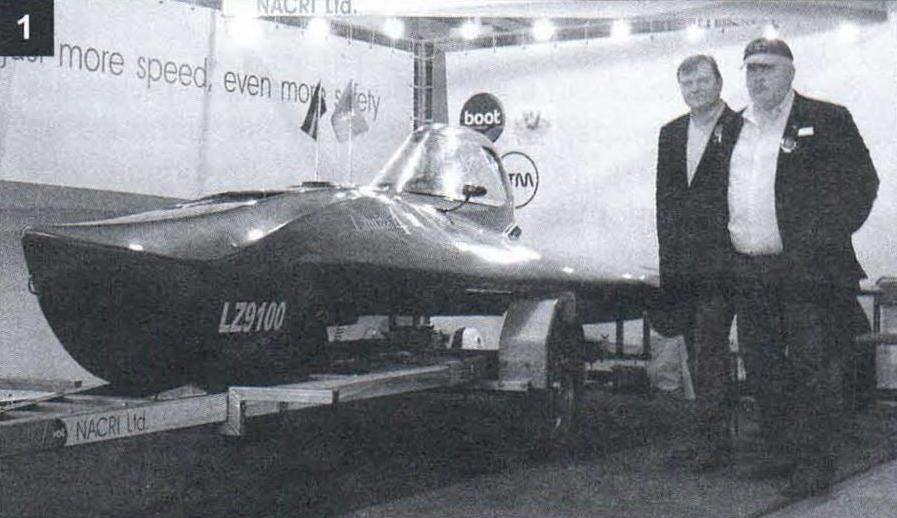 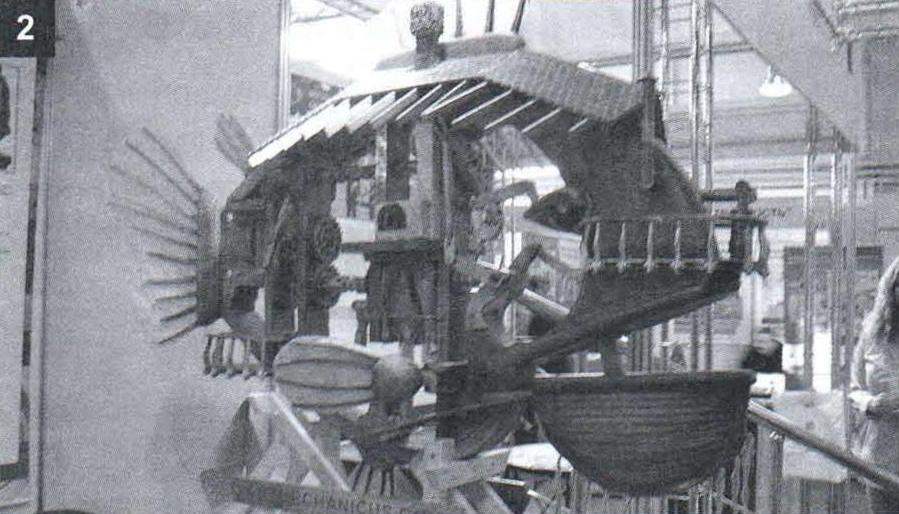 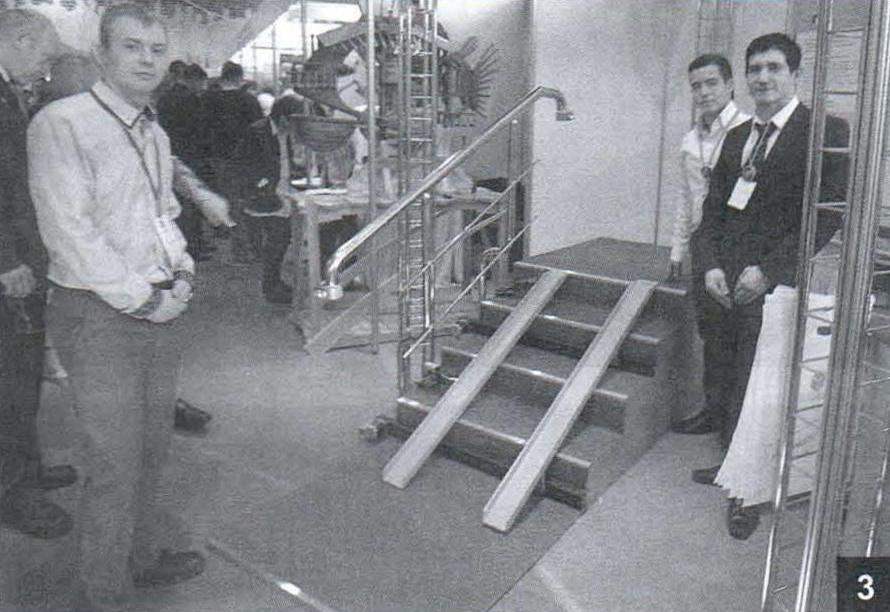 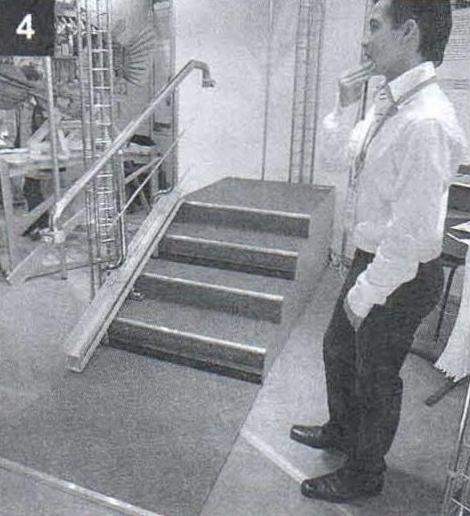 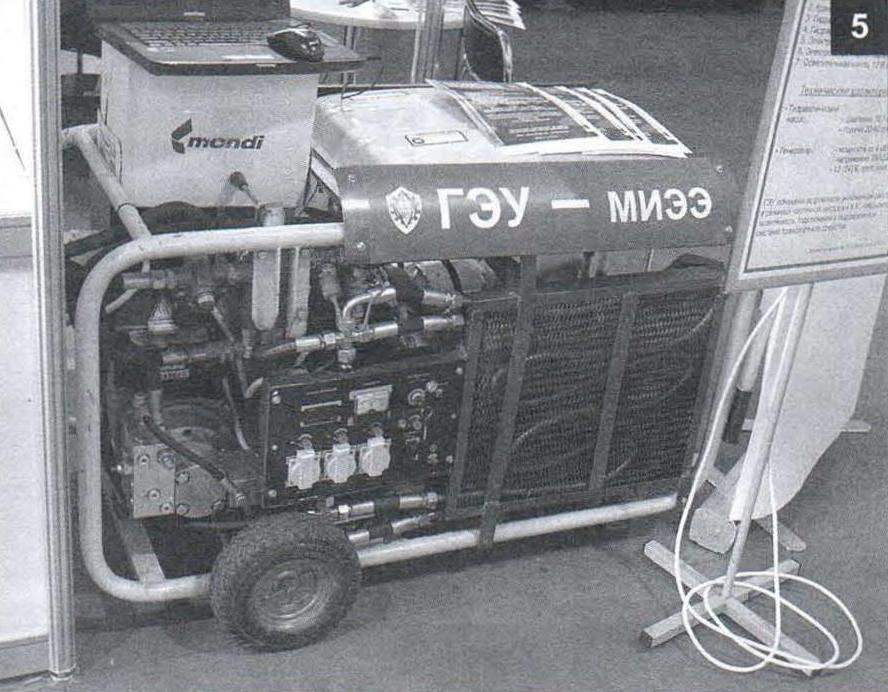 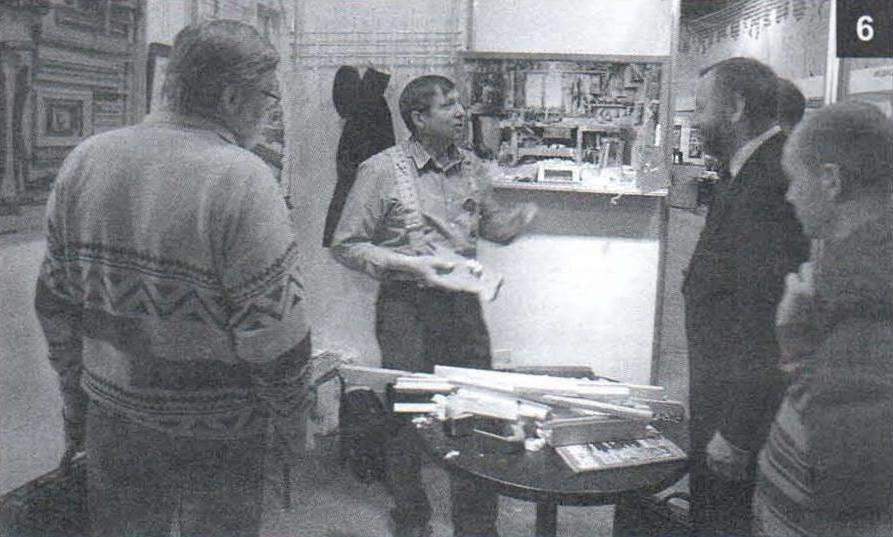 Photo 3, 4. Folding under the rail sliding ramp for easy overcoming of narrow staircases wheeled vehicles with different track (children’s and disabled-cal wheelchairs accompanied by economic and even cargo trucks) designed and produced a young Moscow engineers “Inventor”.
The guide ramp in the shape of a channel made of composite material, durable and lightweight. Folding motor – electric (but may be mechanical), it has switches on the top and bottom of the stairs on the banister, turns off automatically when you hit the object or human leg between the rails.
This is a useful and sometimes indispensable device can be mounted in residential buildings, medical and educational institutions, warehouses etc.
Photo 5. Moscow Institute of power safety and energy saving exposed hydraulic power unit (geu), which is a “tandem” of a diesel generator with a capacity of 4 kW, an outstanding variable voltage 220/380 In, 50 Hz and DC voltage 12/24, combined with hydraulic system with capacity of 20 – 40 l per minute and creates a pressure of 160 ATM.
A “tandem” not only expands the range accomplished with it works, but makes them through the use of hydro tools safe (for example, air pollution or high humidity conditions when to use the tool). Powerplant fitted with efficient operation during part load and idling.
The unit is designed for a mobile trailer workshop, equipped with a crane with a lifting capacity of 840 kg and fitted with various electrical and gidroinstrument. As a tractor for trailer operation use the car “the GAZelle”.
Photo 6. And in the most simple things there is no limit to perfection. So, the maker Mykola Rozhnov never ceases to experiment even with ancient planes. He believes that only hand tools may reveal the beauty (as he says, light and soul) of the wood: and the fuller and richer than thinner the chip, the thickness of which he seeks to minimize. But this would require manual nano-Strug, to the manufacture of which the master is already on the way. About wood and tools Nicholas told visitors in poetic form.
Photo 7. The Moscow firm “the Coach” put multi-monitor automobile simulator used for driver training. The workplace is adapted to persons with disabilities. The visualization system may include from one to four monitors, varying the angle from 75° to 180°. The simulator is provided with programs, simulating different traffic situations. Its wheel are happy to sit not only children, but also professional drivers with experience. 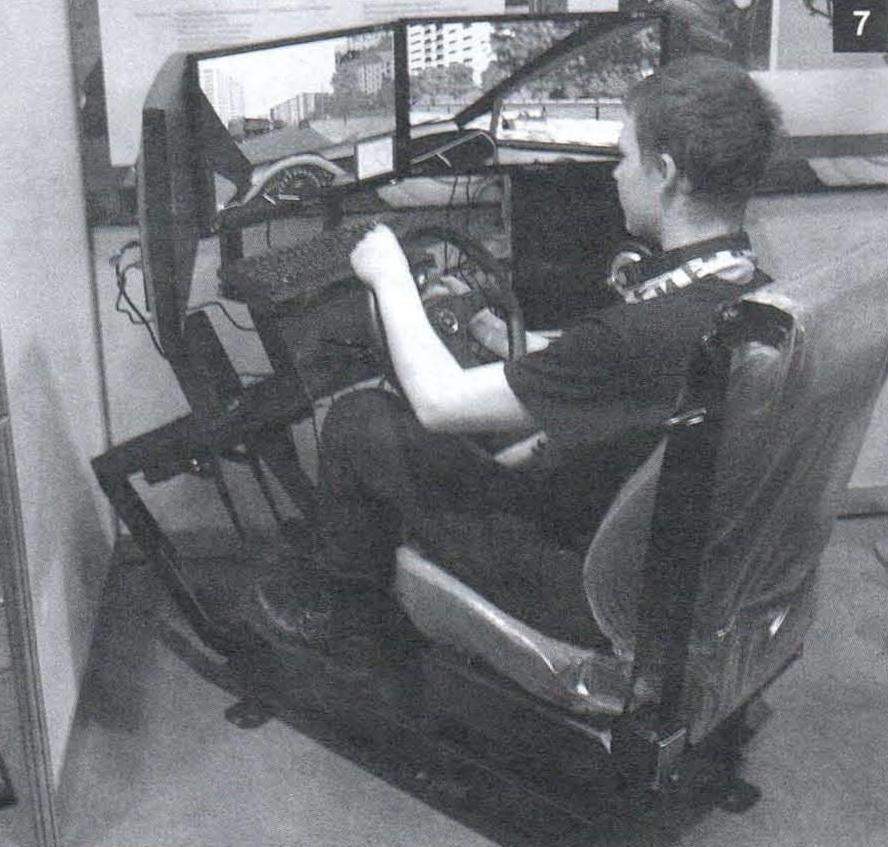 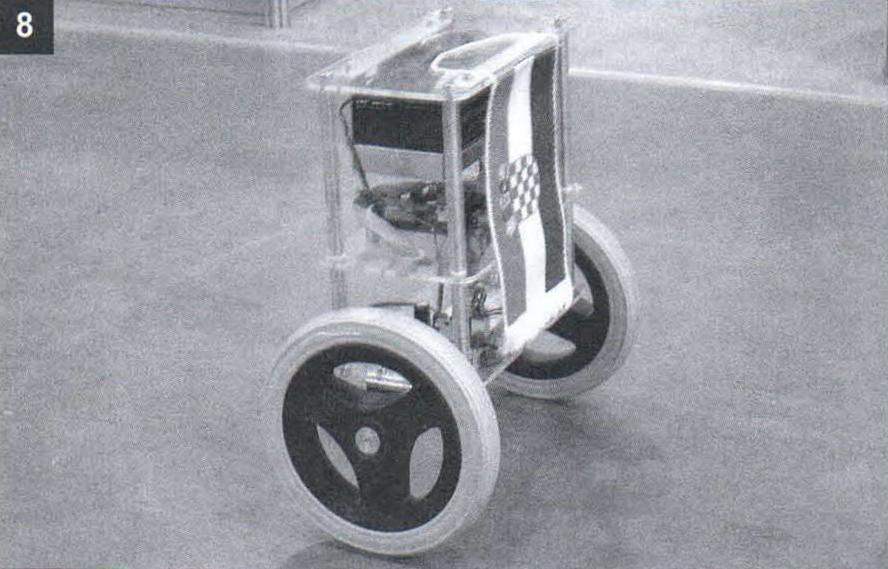 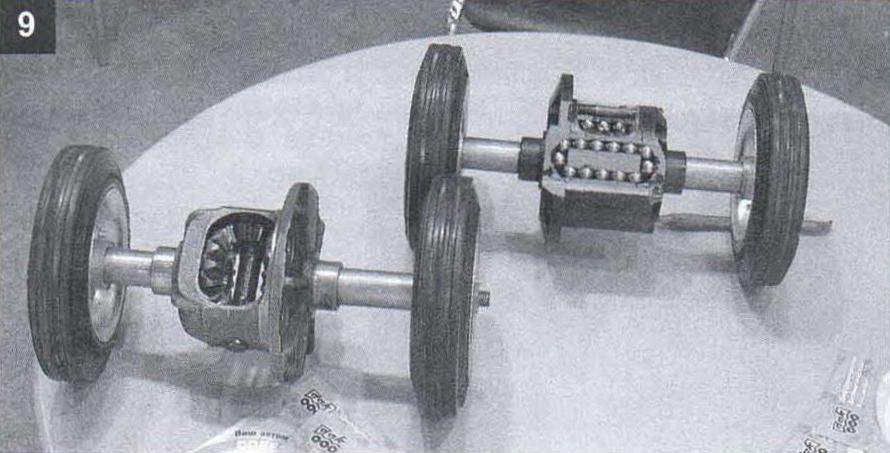 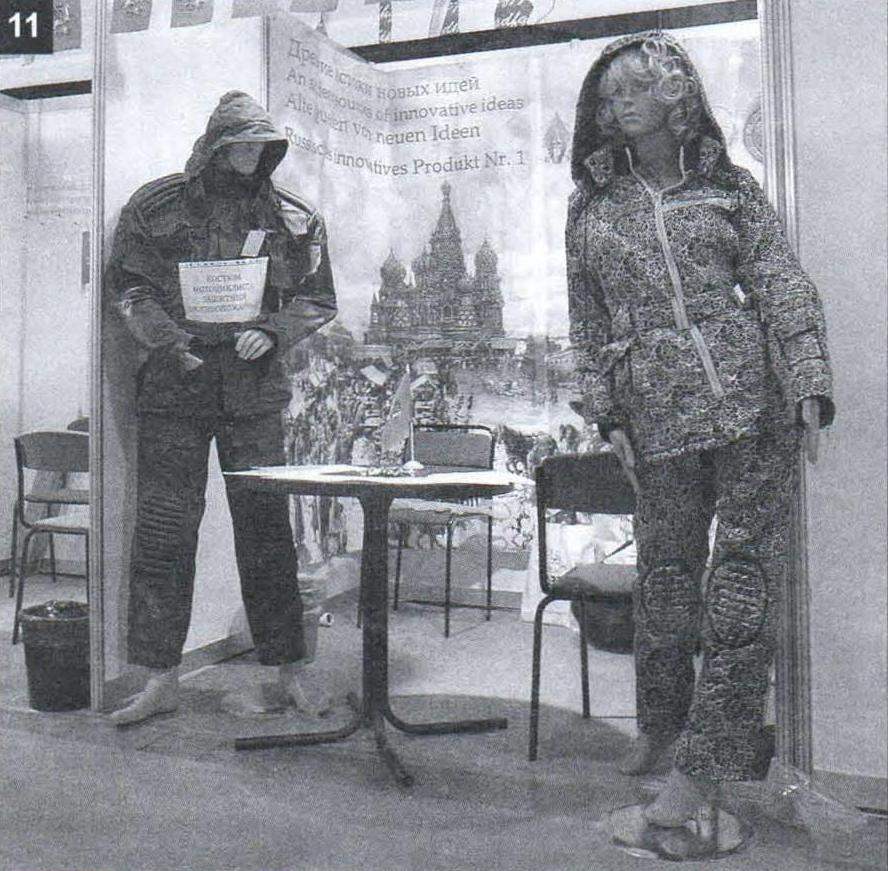 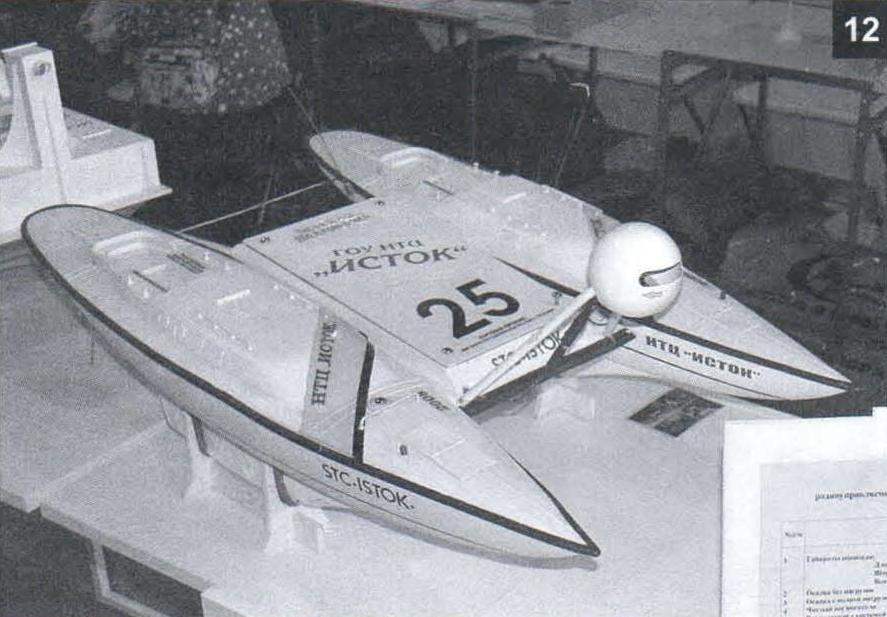 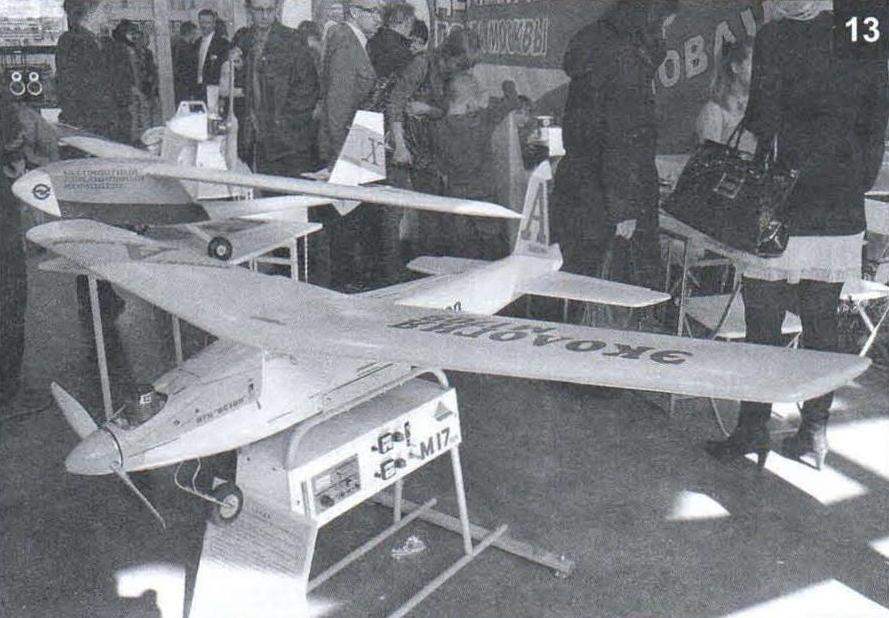 Photo 8. Guests-participants of the exhibition from the city of Zagreb (Croatia) A. Demetrio and T. Tomasic under the guidance of Professor M. Crnkovich has created a self-balancing two-wheeled mobile robot operating on the principle of inverse pendulum. The design itself is unstable, and tends to stall. At this point, the system gyro sensors according to the information about the tilt angle of the robot to the control unit, which calculates the necessary torque to the wheel motors.
The robot can be controlled not only by computer but also from mobile phone.
Photo 9. In any car there is a node that distributes the torque to the drive wheel differential. In the classic version it works well on good road. But slippery is not so: every driver has experienced as spinning, skidding, one wheel, and the other is and the car does not go! This is due to the fact that the conventional differential transmits the torque to the wheel with little traction.
Presented at the salon automatic differential Krasikova inventor (DUCK) from the city of Chelyabinsk in the turns on the road with a coating works as a classic differential in a free state United with the axes augers move the beads along closed channels. Very different DUCK works in different traction: razbirayutsya balls in the channels and do not allow sncam (and therefore the axle shafts) rotate relative to each other, the differential locks. When the conditions for wheels vyrovnitsja, DUCK automatically rasplachivaetsya.
Photo 10. Students and professors of the Vologda state technical University demonstrated a compact and efficient heat exchanger (economizer heat of exhaust gases), which is capable of preheating the vehicle engine and heat the passenger compartment when the engine is not running. While it is possible to control the heat transfer process.
Thermal power is 1.5 kW; the energy consumption from the vehicle while driving – 30 watts. When using it on the car in winter, you can save up to 25% toppila and 40% warm-up time of the motor.
Photo 11. The Moscow firm “the Guardian has Angel” presented suits for extreme conditions. In the fall of chipovka in the water they guarantee status; provide protection against shock loads up to 600 kg. Have fire resistance for 120 seconds. Winter models kept warm at an ambient temperature up to -60°. Shock absorbing protectors, located in anatomically sensitive areas (elbow and knee bends, hip joints, cervical) protects during falls and bumps. If necessary, carry the victim to a special loop is inserted a pair of poles (pipes, valves), and the costume used as a stretcher.
Photo 12, 13. Moscow center of youth scientific and technical creativity Istok demonstrated working models of the catamaran (12) and unmanned aerial vehicles (BPL) for monitoring the state of the environment (photo 13).
A. POLIBIN