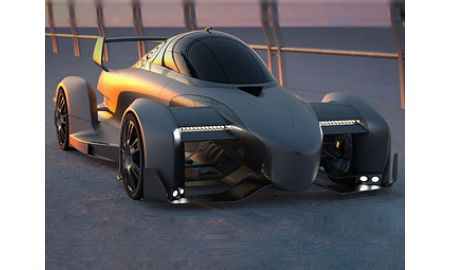 Australian designer Philip Legerski presented a draft promising sports electric vehicle, able to accelerate to a maximum speed of 500 kilometers per hour.
According to the developer, the purpose of creation of this machine, named B7, was an attempt to prove that cars of this type can be quick to look good and to manage and deliver driving pleasure.
The project Legerski involves the use in the power plant of the car is not heavy and expensive batteries, supercapacitors, which are more powerful, but smaller and lighter than lithium or metal hydride batteries used in existing electric cars. In the motion supercar will be using four electric motors – one for each wheel.

In motion, the battery will be recharged using an eight-cylinder engine running on LPG. This unit has no connection to the wheels and is only used as a generator.
In the electric two seats, while the passenger is situated just behind the driver. The cockpit can be partially opened while driving at low speeds, but with the rapid movement it will have to close due to aerodynamic requirements.
About the prospect of such machines in the series have not yet been reported.
A similar concept – supercapacitors and engines using liquefied petroleum gas – used for Russian hybrid “e-mobiles”. The first such car will appear on the line next year.