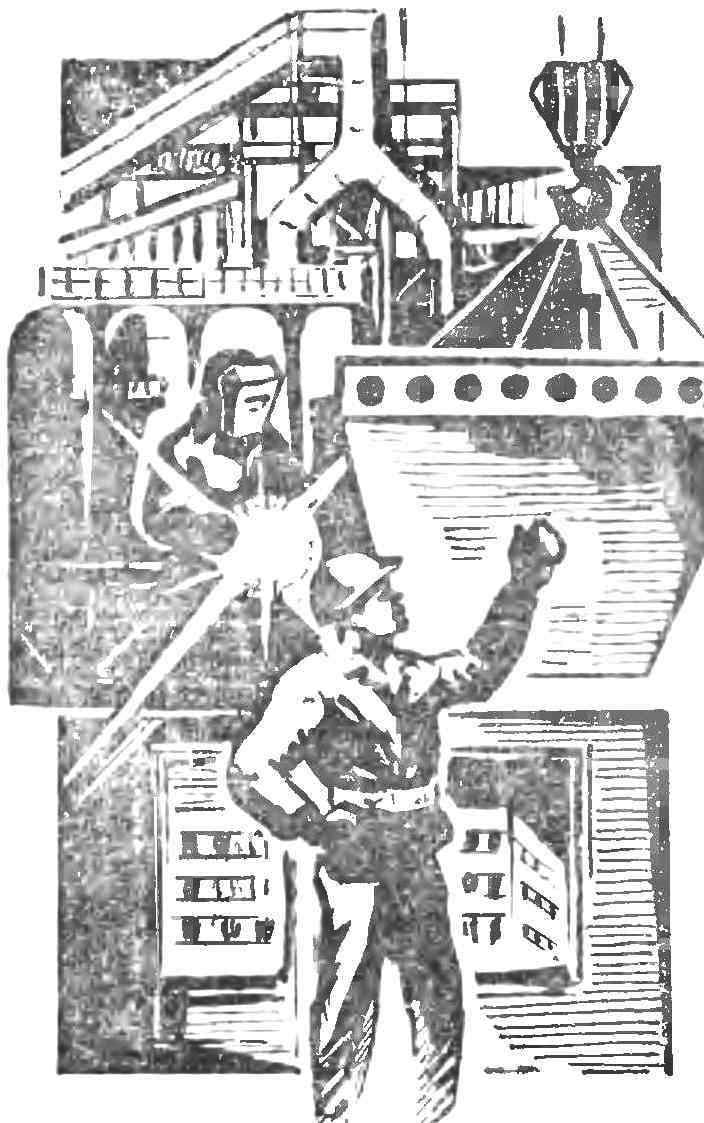 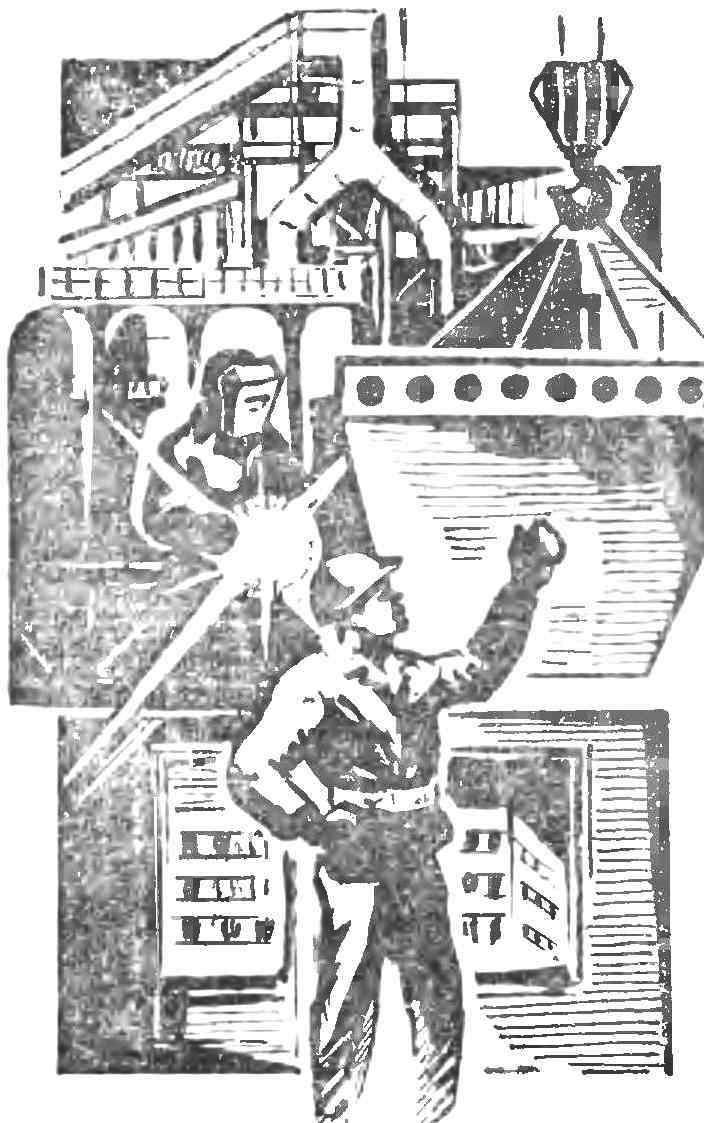 “…The interests of both the current and longer-term development of the country demand a comprehensive intensification of production, acceleration of scientific-technical progress, growth of labor productivity as the decisive factors of increasing the efficiency of production.”
From the report of A. N. Kosygin
XXV Congress of the CPSU “the Main
directions of development
national economy of the USSR
in 1976-1980″.
“POULTICE” CURE… METAL. Even a worn out machine parts such as shafts or axle of tractors, trucks, various mechanisms, is able to “heal” method wyprodukowany surfacing. Externally, this process is similar to welding electrode wire. Just next to the first seam from the hot metal falls close second, third, until all the erased surface of the part will not be “bandaged” of the deposited layer. The operation is usually done under the cover of flux or in a protective atmosphere of carbon dioxide.
Maintenance enterprises Kirovlesprom new technology, which is much easier, cheaper and more accessible: it can be used even in small workshops. The fact that here for the restoration of worn steel and cast iron components as a protective environment used… water vapor.
His jet compared to gas has a number of quality and technological advantages. Become more favourable conditions for the formation and crystallization of the layer, reducing the tendency of weld metal to the formation of pores and cracks, and this means that it increases the fatigue strength. 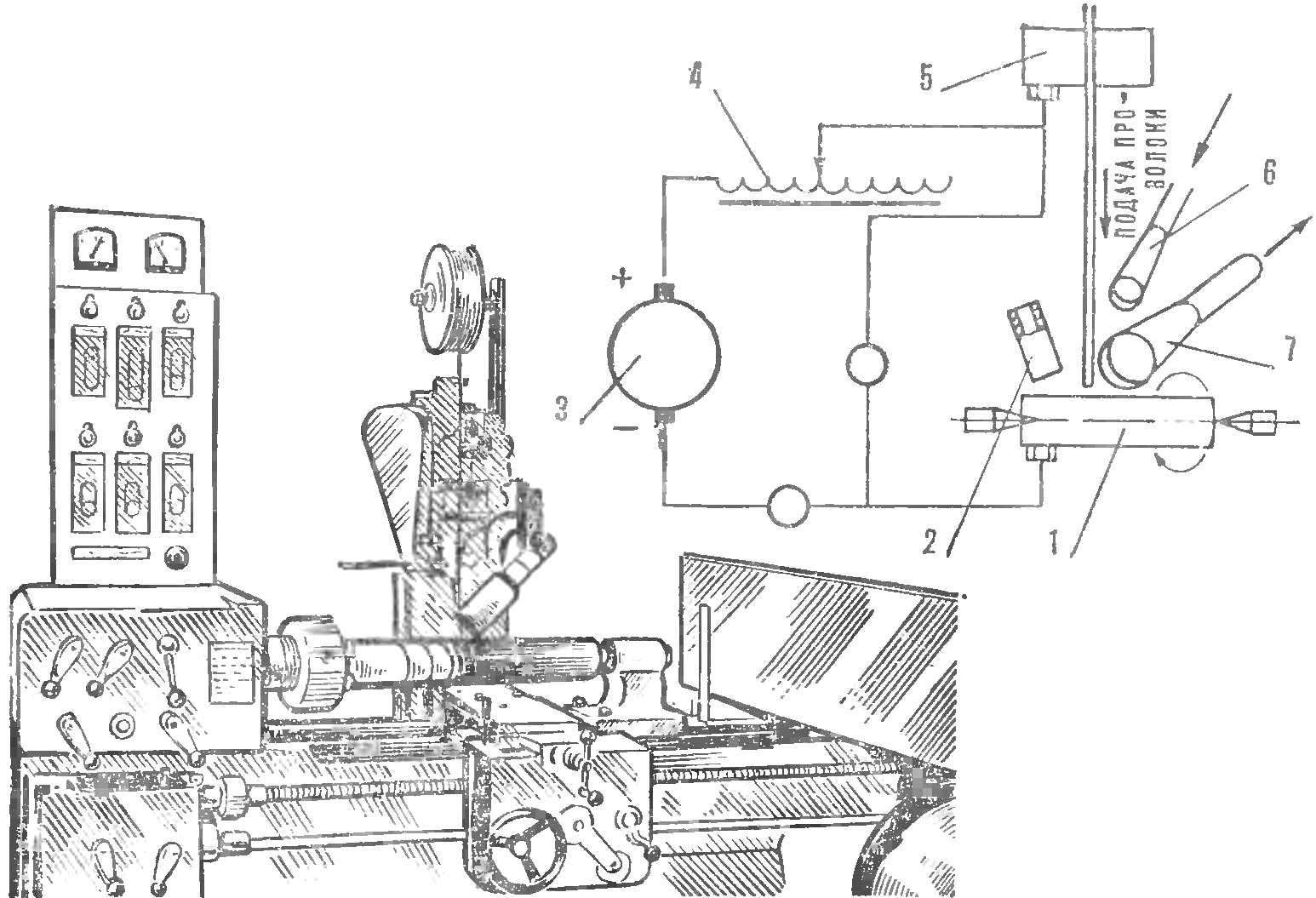 Fig. 1. Installation for surfacing of metal and its scheme:
1 — restore the detail, 2 — tube for coolant, 3 — welding DC generator, 4 — welding regulator, 5 — vibroboy automatic welding head 6 — nozzle for steam supply in the welding area, 7 — nozzle for sucking air from midpassage gap welding zone.
Installation wyprodukowany welding in protective atmosphere of water vapor (Fig. 1) has found application at the Kirov and Petrozavodsk mechanical-repair factories at the Severodvinsk factory road machines. As the steam generator used mobile electric unit construction Department of Donetsk welding. The introduction of this new technology in Association Kirovlesprom provided economic effect in the amount of 26 thousand rubles per year.
Interestingly, the installation allows the surfacing and in the air flow created by suction of air from midpassage gap welding zone. This method for surfacing of cast iron low-carbon wire allows to obtain dense and tractable layers of metal. For welding steel using carbon wire. Air flow in midpower gap is formed with a stationary vent (suction and dust) unit ZIL-900. Thus in the ventilation system discharged gases, vapors and spatter produced during welding. It improves working conditions, increases the cul-ture of production, gives a considerable economic effect.
CRASHMAT. Many construction sites to improve productivity for finishing works is used the mechanical method of applying on the treated surface mastic compositions.
For these purposes, the innovators of the trust orgtekhstrojj Kyrgyzstan developed the pneumatic tool, called the funnel-gun (Fig. 2). With it, one working for one hour can stain or luted to 100— 150 m of the surface. 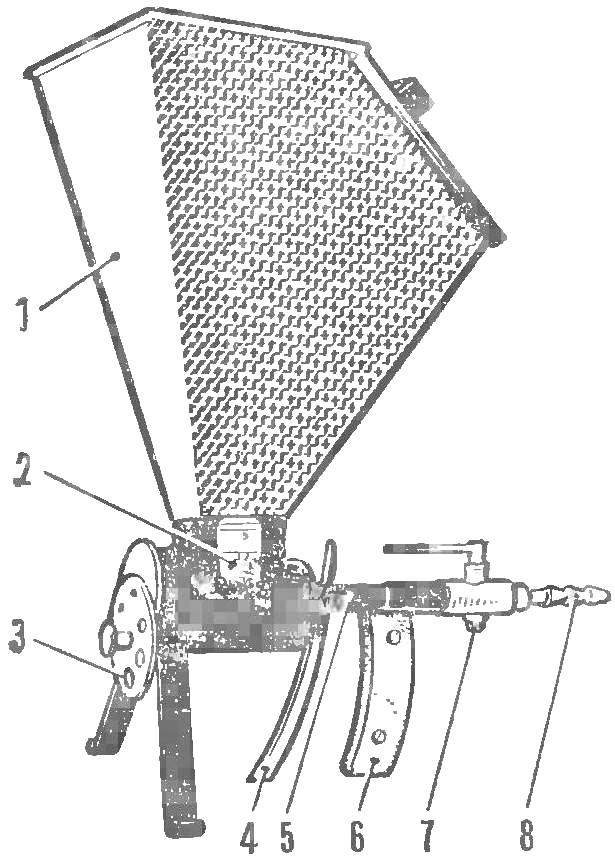 Fig. 2. Funnel-gun:
1 — funnel (hopper), 2 — mixer, 3 — disk, 4 — lever throttle, 5 — outlet, 6 — handle, 7 — tap 8 — fitting to the pneumatic.
The tool is quite simple in apparatus and easy in operation. It consists of a hopper-a funnel, fill the machining part, mixer, to which nut is attached to the lamb disc atomizer. The disc includes six outlet holes of different diameter. Depending on what is applied on the surface — paint, plaster or decorative fine-grained grit, the rotation of the disk is set to the desired hole.
The bunker is connected with the mixer by means of electric welding. Inside is the throttle that acts as a regulator of intensity of the mixture flow and shut-off devices. He is driven by a lever located on the back side on extension. It is mounted arm, a crane, having a Ø of 6 mm, and the fitting that connects the tool with the pneumatic hose (pressure is over 4 ATM).
THE CLIP INVISIBLE. Often in mechanical or foundries billet parts need to be processed, do not require great precision, but differs in the variety of locations of the workpiece relative to the tool. For example, when the blunting of sharp edges, removing burrs and fin, Stripping the casting surfaces.
For such operations innovators Balashikha casting-mechanical plant proposed an original device, which combines function of a ball joint and the grip. Rather, in the adaptation of the applied two kinds of grip: the traditional clamp parts, and an electromagnetic fixing the basis of the first ball in the most convenient for handling the situation. 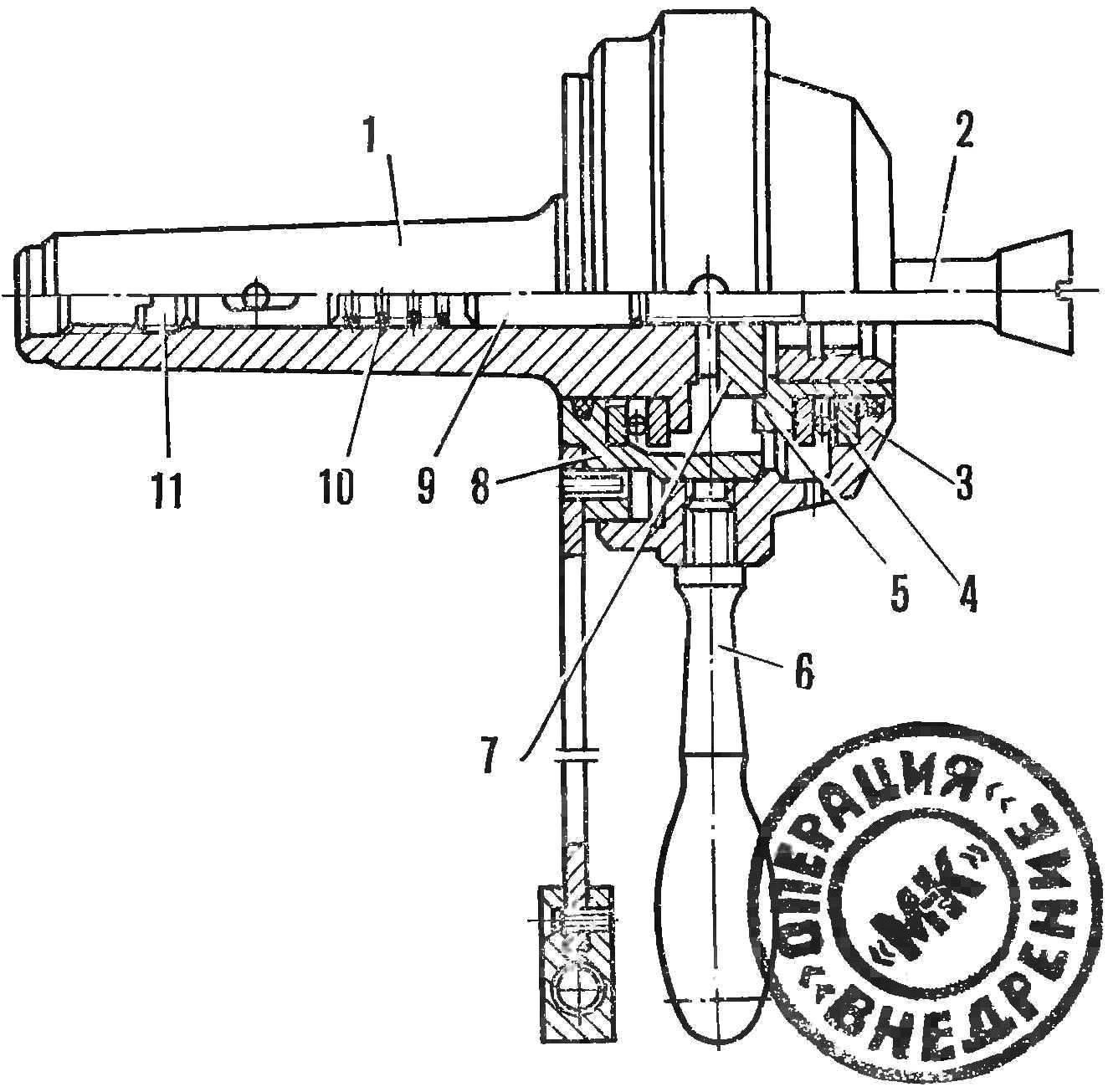 Fig. 4. Keyless Chuck:
1 — collet Chuck, 2 — razgonnyj screw 3 — nut, 4 — bearing, 5 — Bush, 6 — arm, 7 — dry, 8 — hub, 9 — pin, 10 — spring, 11 — tube.
The device and principle of action of devices is clear from figure 3. Between the sliding jaws of the clamping node (e.g., the clutches) of the fixed part. Movable spherical the base of the knot rests on the concave hemisphere of the cradle, formed of the upper parts of the cylinder and integrated in it a non-magnetic sleeve. Pressed into the cylinder core, and between them, like poles of the electromagnet, inserted coil winding. Installing detail, includes solenoid, securely locking its position for the entire treatment period.
The fixture not only to facilitate the performance of such operations, but also significantly increased productivity by reducing time on installation details.
The same purpose is another rationalization proposal — Keyless Chuck (Fig. 4). It’s much accelerate the consolidation details on their blind or through apertures by means of replaceable snap collets Ø 5 — 45 mm. Precise and secure fit they provide taper and straight thread.
The device and principle of operation of the cartridge next. In his case rethimnou screw the collet, depending on its base surface razgonnyj pick up the screw, then tighten the nut. When you turn the knob from itself, the nut is screwed on the sleeve, moving to the left, and through the bearing sleeve and the key transmits axial movement resinosa screw.
To remove the item, simply rotate the handle in the opposite direction. Pin, spring and tube allows to regulate the force by the axial moving rasinovo screw.
Cartridge, weighing less than 3 kg, provides high accuracy of manufacturing of details in 1,5— 2 times increases productivity.
PRESS SNIPER. It would seem that it can rodnite tiny white pill, applied to the sick, and engineering detail used in machine tools or other modern equipment? It turns out that they can both be manufactured from sintered components, versatile and progressive moulding. Although the installation for their production is different, the technological challenges are quite close, and one of them is the accurate feeding of the matrix by powder pressing punch. Because the slightest miscalculation — and the pressure can be not material, and the matrix, which threatens to failure of the tool.
This explains why the attention of specialists to the exhibition of scientific and technological achievements of the enterprises of mechanical engineering and instrument making, held at VDNH of the USSR, has attracted press tool marked by the copyright certificate № 389859. The device provides a “sniper” combining both the basic units of the press.
The new tool punches are mounted on the upper traverse in the nests of poissonneries is not hard, and with the help of special elastic cuffs (see Fig. 5). On the lower traverse under punches served by rails filled with powdered matrix material with the pallets. Included stroke and during movement of the press table up the conical “funnel” of matrices catch and direct the working heads of the punches are coaxial in relation to the matrices. The exact “compatibility” them is achieved due to the necessary deformation of the elastic centering cuff, allowing the punches to be displaced from the centers of the nests poisonedwaters. 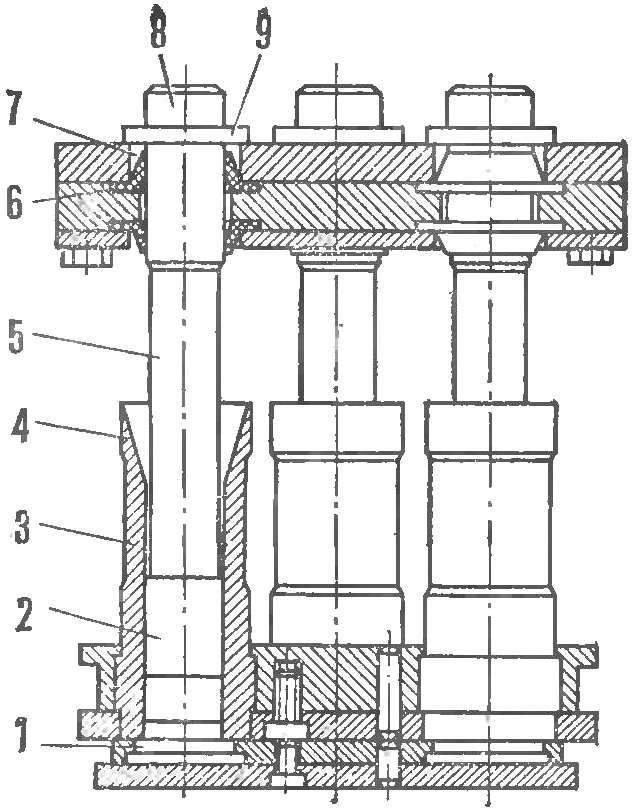 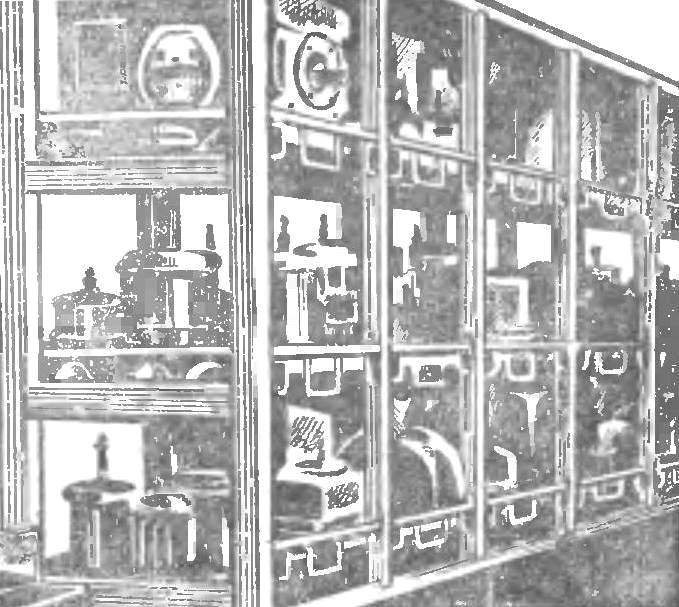 Fig. 6. A rack of molds
After that docked nodes press rise to the emphasis of the shanks of the punches in the upper traverse of the tool is pressed. Further, the movable cross beam with the sensors and the pallet is lowered to its original position, a change matrix with the pallet and the cycle repeats.
The new tool weighs 25 kg and is designed for manufacture of parts with a height of 5-40 mm and a diameter of 12-24 mm, improved performance to 1830 pieces per hour and completely eliminated the jamming of the punches in the matrices.
The improvement of working conditions and economy of the production areas in the press sector will ensure the implementation of another exhibit — the storage rack molds (Fig. 6). It is recommended for use in instrument and mechanical engineering. Its welded frame sizes 5000X850X2000 mm consists of 25 cells, each of which retracts the movable platform with a mold. Roller bearing platform make it easy to nominate her hand, and then use a crane or other hoisting device to remove stored in the cell tool. The total load on the platform can reach half a ton.