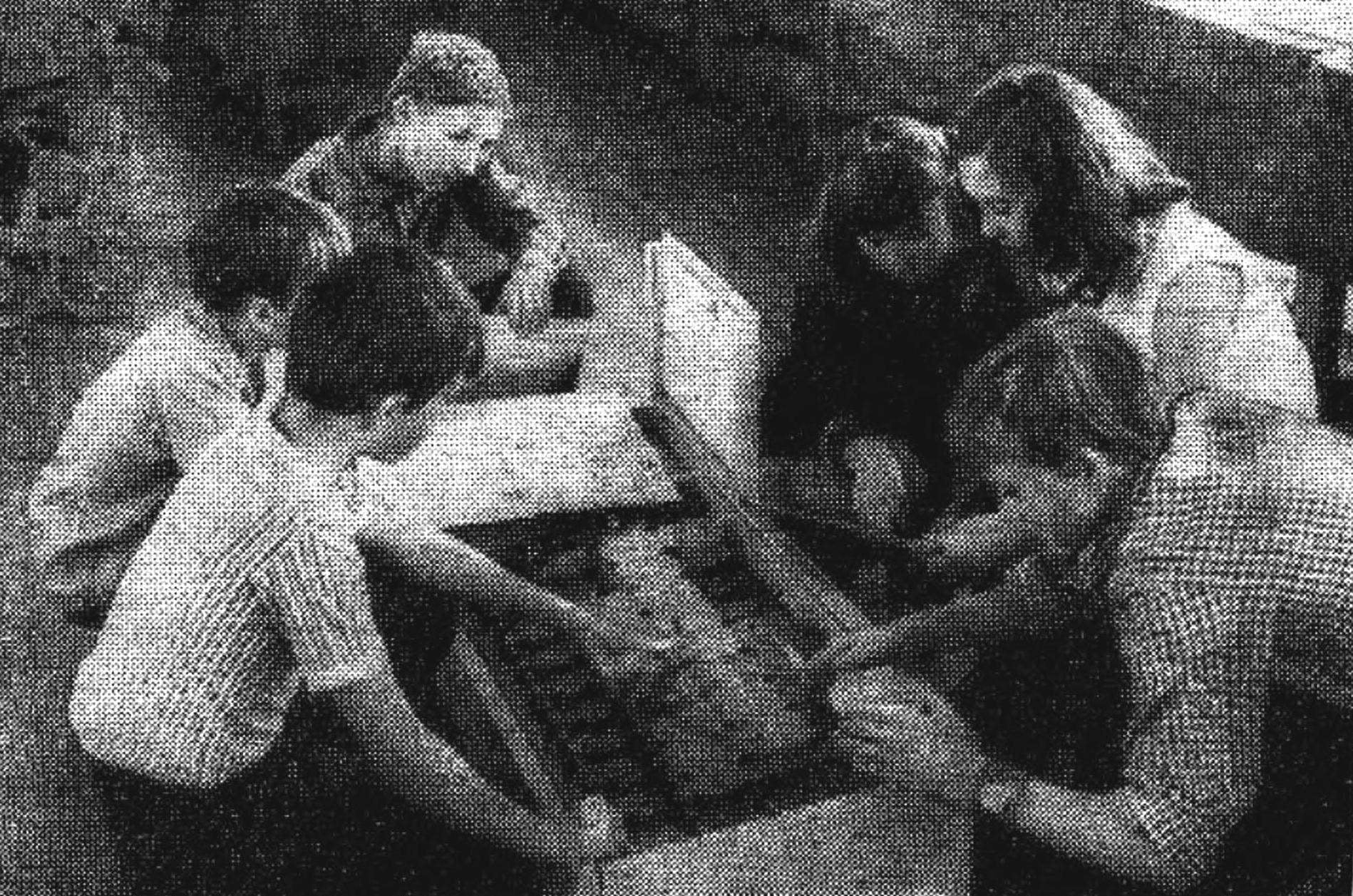 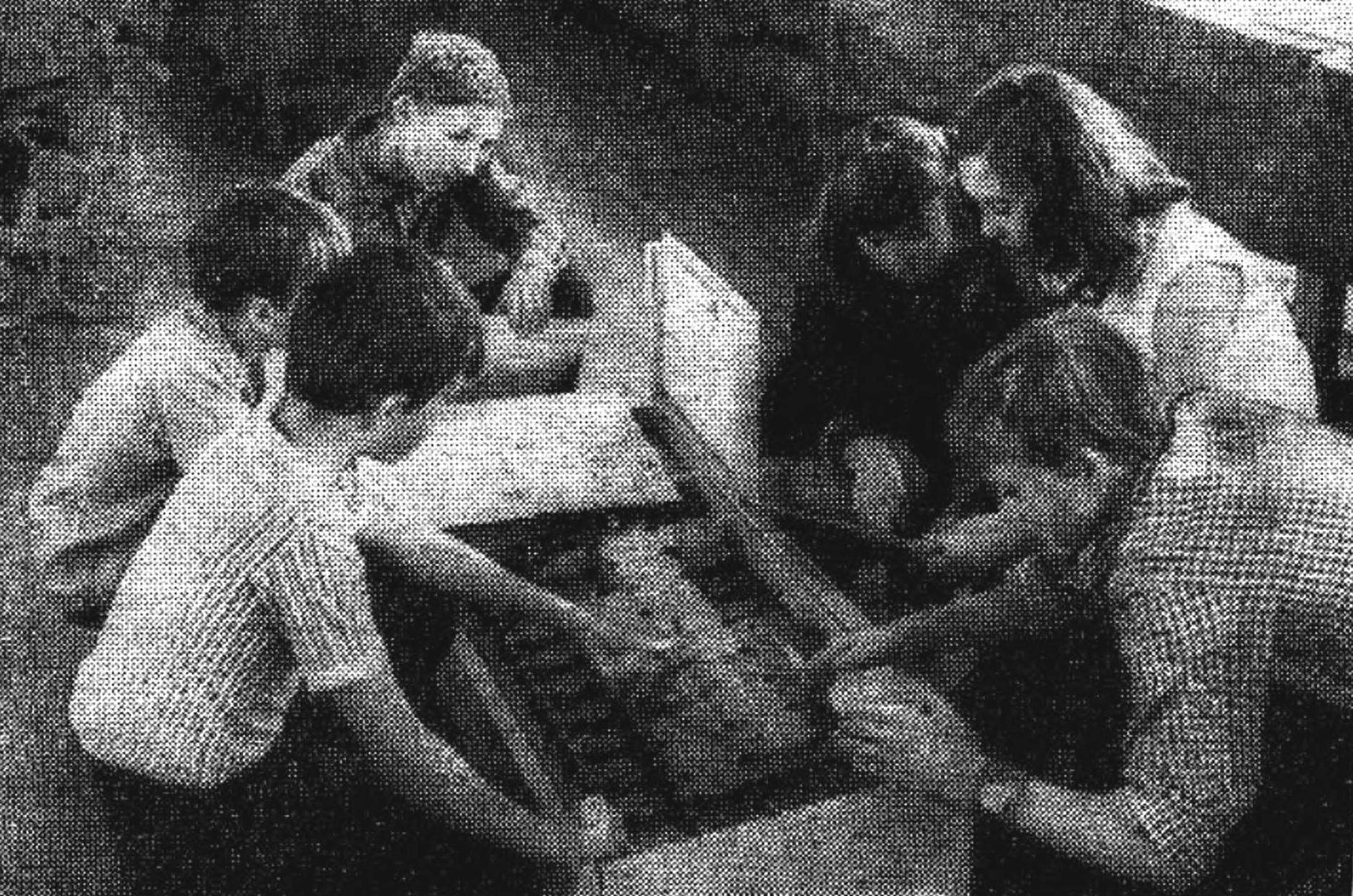 Two teenagers busily hung sheets of drawing paper with drawings, diagrams and charts prepared for demonstration equipment; competent judges willing to listen to the speakers. What is it? A defence of a thesis or coursework? Neither, because the main actors here, the students — participants of the IV all-Russian meeting (the add of innovators and designers for the electrical engineering, automation and remote control was held in Magnitogorsk in August last year. As for protection, it is really happening.
Yuri Bakharev, Vitaly Guchek, the members of the section of automation and telemechanics of the Chelyabinsk city scientific society of students at the Palace of pioneers and pupils named after N. K. Krupskaya, protect your project discrete telecontrol systems. We are talking about the device that commands from the ground includes measuring devices installed on a floating in the open sea buoys.
Young researchers present the participants of the rally version of the instrument, made on the instructions of the Chelyabinsk Polytechnic Institute.
Listening to the performances, and substantiated by theory, heavily supported by practical materials, watching as they demonstrate the device in action, hardly force yourself to believe that you are only students.
Here once again convinced that broader categories begin to think our children that the education they receive in school, combined with active participation in socially useful work makes them in their aspirations to reach a wide arena of large equipment.
What is reported to the participants of the rally, the most notable in their works? The most important is the search. It is the desire to achieve original and at the same time, rational circuit design, constructive ideas characterizes today’s young radio Amateur. This is no accident: no ideas all threatens to turn into simple needlework.
Nothing is so convincing as a good example. Each of the 320 exhibits presented in the Magnitogorsk Palace of pioneers, reflected the creative idea of its creators. It is natural that to assemble the device or the device and try somehow to improve, improve it, adapt it to their needs impossible. Even such works as “Light and music installation” (syt Kopeysk Chelyabinsk region) or “self-Learning gaming machine” (House of pioneers, Ugodsky Plant in Kaluga region), which are based on the schema of our magazine, it’s hard to learn: so much was made them boys of improvements and design changes.
Creativity is not a privilege, it is the right and duty of each student. Only need to find ways in which boys and girls are able to Express their own ideas.
Perhaps one of the most important among these areas is the design of devices and equipment for the national economy. The idea with special brightness confirmed the meeting: economic theme was the most representative in number of exhibits, and protected projects.
And this is no accident. Now increasingly the creativity of young goes jobs scientific and educational institutions, enterprises, collective farms and state farms. 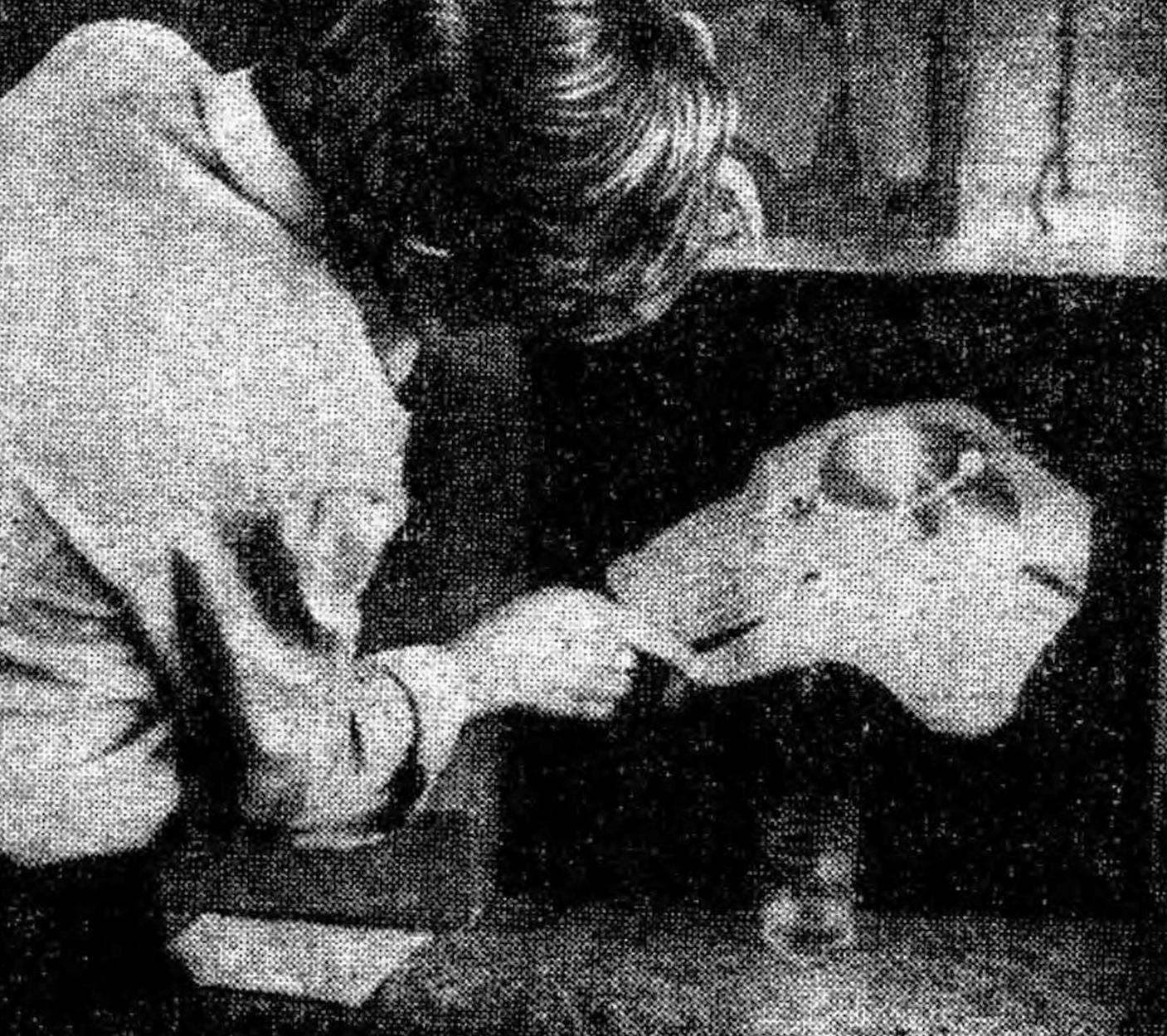 — Current educational illustrative materials on biology, created in the North Ossetian Republican syut
An example of the Chelyabinsk guys are not single. Call other names. Gene the wolves from the House of pioneers city of Vladivostok made measuring the velocity of fluid flow on the instructions of the far Eastern Polytechnic Institute. And now he takes part in the work of student design Bureau for the creation of electronic equipment for medicine.
Here, in Magnitogorsk, repeated the kind words in the address of Novosibirsk — recognized enthusiasts of technical creativity in the field of agriculture. Among the novelties presented by them at the rally .. — universal device agronomist, electronic meter seeds moisture meter. Performed at the level of serious engineering design of the children received a high estimation of experts.
The performance of the Glory of Alyabyev and Sergei Tarasov, who represented at the protection of creative workers the staff of the radio laboratory of the Novosibirsk obrzut, not by chance have aroused great interest in the audience. The theme of mechanization of agriculture attracts children from many other Autonomous republics, territories and oblasts of the RSFSR.
Take electronic automatic counter dispenser live chickens, established at the school No. 9 of village of plant of a name of Mendeleyev Yaroslavl region. Sergei Morozov, Marina Knyaz’kina, Eugene Smirnov — the authors of the counter-dispenser — received a certificate for rationalization proposal.
The fact is remarkable. It shows that Amateurs-students, along with the entire army of many thousands of radio Amateurs adults sensitive to the problems that our country is living, to the best of their ability try to help in the big economic cases. Now, when there was widespread movement of student production brigades, it is clear the desire of children to mechanize the labor of the farmer.
Speaking from the rostrum of the meeting to their peers, young designers and innovators, Sergei Tarasov called for:
— Let’s try to make every school working circles dealing with the development and implementation of instruments and machines for agriculture.
There are other areas of the creative search of young. For example, such a traditional area of activity of the radio Amateurs, as the design of household equipment, it seemed, not Xitami a wide scope of creative imagination. Most often it is limited to the selection of a suitable scheme, And as to issue the design — is a secondary matter. 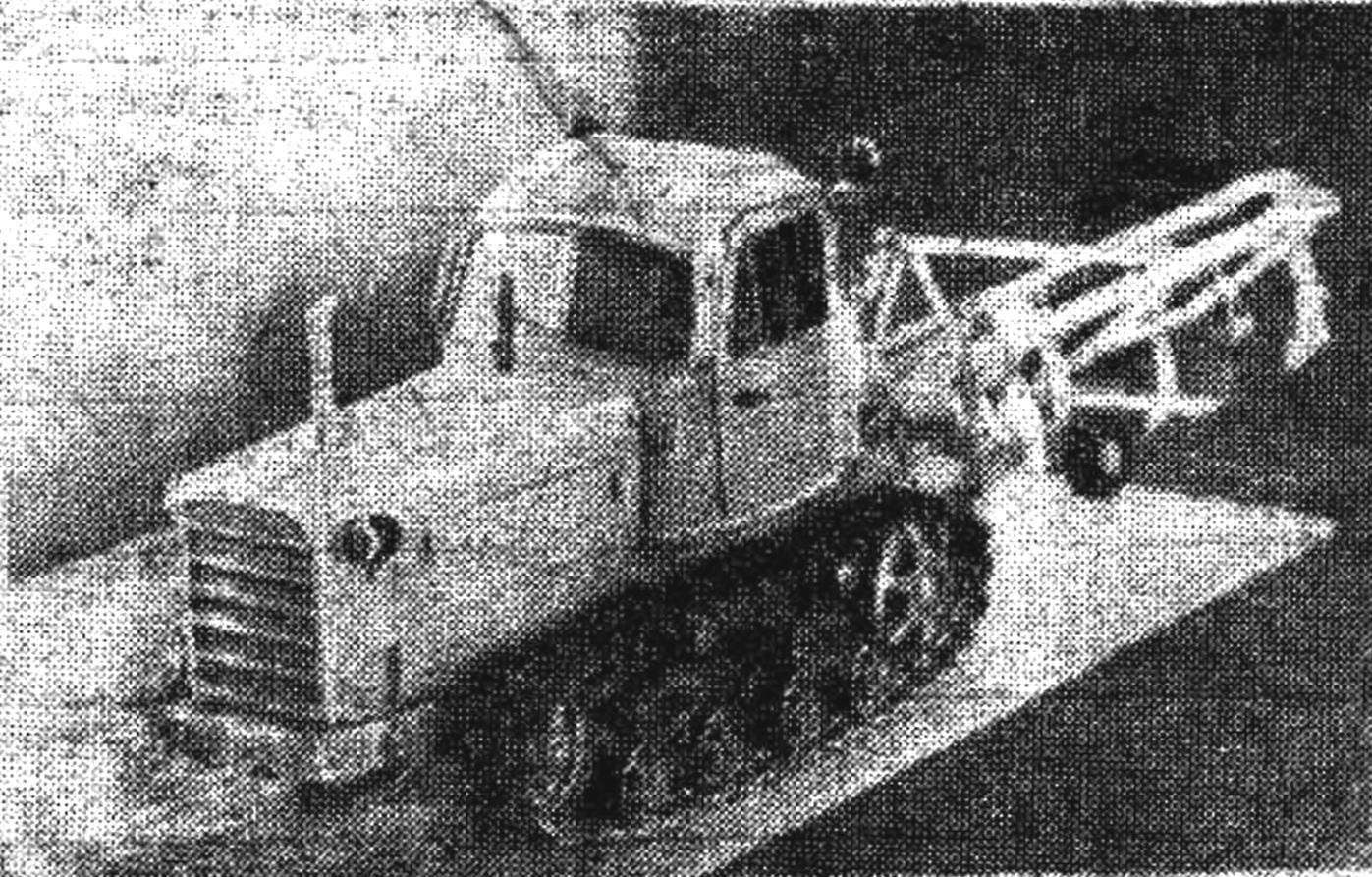 Model tractor DT-75M with remote control made by young technicians of the village herbalists in Chelyabinsk region.
Saratov schoolboy Georgi Gerasimov did not go off the beaten path. At the meeting of the jury of the rally he defended his own version of scheme and constructive solutions to the Quad amplifier.
And the game? Sometimes it seems: children, embodying their fantasies and dreams, just do it. But without the game the young man sometimes you just can’t captivate a serious problem.
Game rally played in a variety of guises. A series of game machines, radio controlled miniature cars, funny “puppies” and “kittens” stuffed with electronics, gauges the speed of the reaction, the equipment has always been noisy interest of all participants, both young and the elders. Everyone wanted to determine their reaction to light, sound, team to hold a car on the highway without hitting obstacles, drink “kitten” or to guess all six numbers automatic lottery.
Generally “lucky” at the gathering. Them favorably accepted in each section. The same major themes: fantasy, search, experiment, rationalization was evident in this area of work guys. For example, the machine “dog detective”, made members of the circle of Cybernetics syut of the city of Kaluga, Igor Demidov, Alexey Yelagin, Alexander Kireev, won over the jury with fantasy authors and originality of ideas. And the creators of radio-controlled models “the Zhiguli” and lunar Rover “Mars-1” — Volodya Savelyev, Nadia Palomino and Ira Baisultanova of boarding-school № 2 of the city of Chapaevsk, Kuibyshev region proved himself not only as designers, but as experienced developers. Children have made their models for the radio equipment working on VHF.
“Radiomobile” also a game, although many will deem the kit from Kuibyshev good textbook on radio engineering. Their statement no one will dispute. Nevertheless, each watching step by step construction of a new radio circuit, said: “Sasha Nieminski plays to “cubes”.
And the guys from the village herbalists Chelyabinsk region has shown a lot of invention and ingenuity, has done a lot of search work, building an exact copy of the tractor DT-75M in seven and a half times smaller than the prototype.
In gear box compact tractor all gears are in mesh constantly, and the drive from the shaft to the chassis is effected by means of electromagnetic clutches. Their children developed specially for the model. This allowed to control it with a remote control.
The new tractor has a rotary plow, which is only still being developed by scientists. Working with the model, you can learn almost all commands that you then meet in the field on a real car. Can’t call this toy a serious thing!
A lot of guys talked about what was happening in their school. And the exhibits — mostly educational-visual AIDS, physics instruments, educational devices — eloquently testified to the desire of pupils to improve the learning process, making it highly visible, to facilitate the teacher’s work. This is no accident. The lads didn’t see in school every day and think of her often.
— If the language of the dog to bring “food” fistula of the pancreas secreted saliva, — Sergey Turchenko, Bartres Kataev and Light Werewine not for the first time demonstrate for the jury and the participants ‘ educational illustrative materials “Reflex”; picture of a dog’s head with glowing eyes. The idea of such devices is not news. But the guys have tried not only to make allowance in the most visual way, but also contributed to the design of the instrument a number of improvements. The result is a beautiful gift for a biology classroom.
Four days continued protection of technical ideas designed to expand the scope of the school textbook. Many curious instruments showed the guys. We should remember a complex demonstration of the devices on wave physics made by members of the design office of the school № 13, the city of Glazov of the Udmurt ASSR, the family of examiners, demonstrated all the “trends” and “trends” that exist in this popular form of technical creativity.
Jury summed up the results of their work, noted with diplomas, prizes and certificates creative achievements of teams and individual authors. Words of welcome: “success to you, the participants of the IV all-Russian gathering of innovators and designers!” — on the facade of the Magnitogorsk Palace of pioneers sounded now like a farewell speech. Launched next, V rally.
A. DMITRENKO, our special. Q.