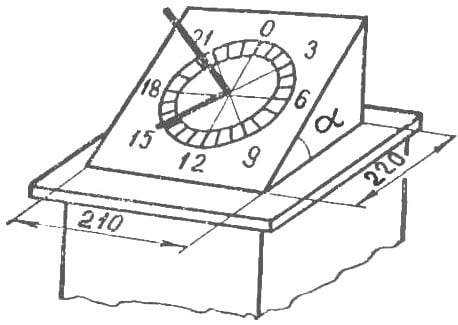 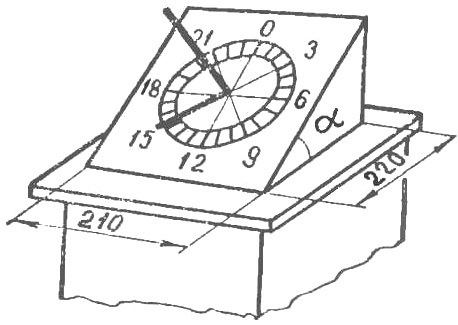 The it equipment in the school yard does not present great difficulties and would not require much cost. Students are having such a station will be able to conduct geophysical or meteorological observation, and study various natural phenomena and their relationship. It will have to make only a few simple instruments and tools.
Choose a location for the station so that it does not shadow from nearby buildings or trees. The area can be 10 X 10, 15 X 15, 20 X 20 m and more. That’s what it should be.
The vane (Fig. 1). On the top of the pole with a length of 5-6 m beat box of thin matter the size 700X120 mm. Underneath hold the wooden circle on the lower side of which is a bright paint is applied refer to the cardinal directions. For deviation check box, the observer determines the wind direction.
The vane can be cut from sheet metal, as shown in the figure. This supplies a wind sock is more perfect: it measures the wind speed, which shows the deflection of the vertical blades on the arc scale. The arrows on the top of the pole oriented to the cardinal.
The pointer of the compass (Fig. 1) consists of two straps, joined at right angles. The length of each of them is 3 m. strips should be attached to a table with the geographical coordinates of the place. One of the straps is necessarily directed along the Meridian. 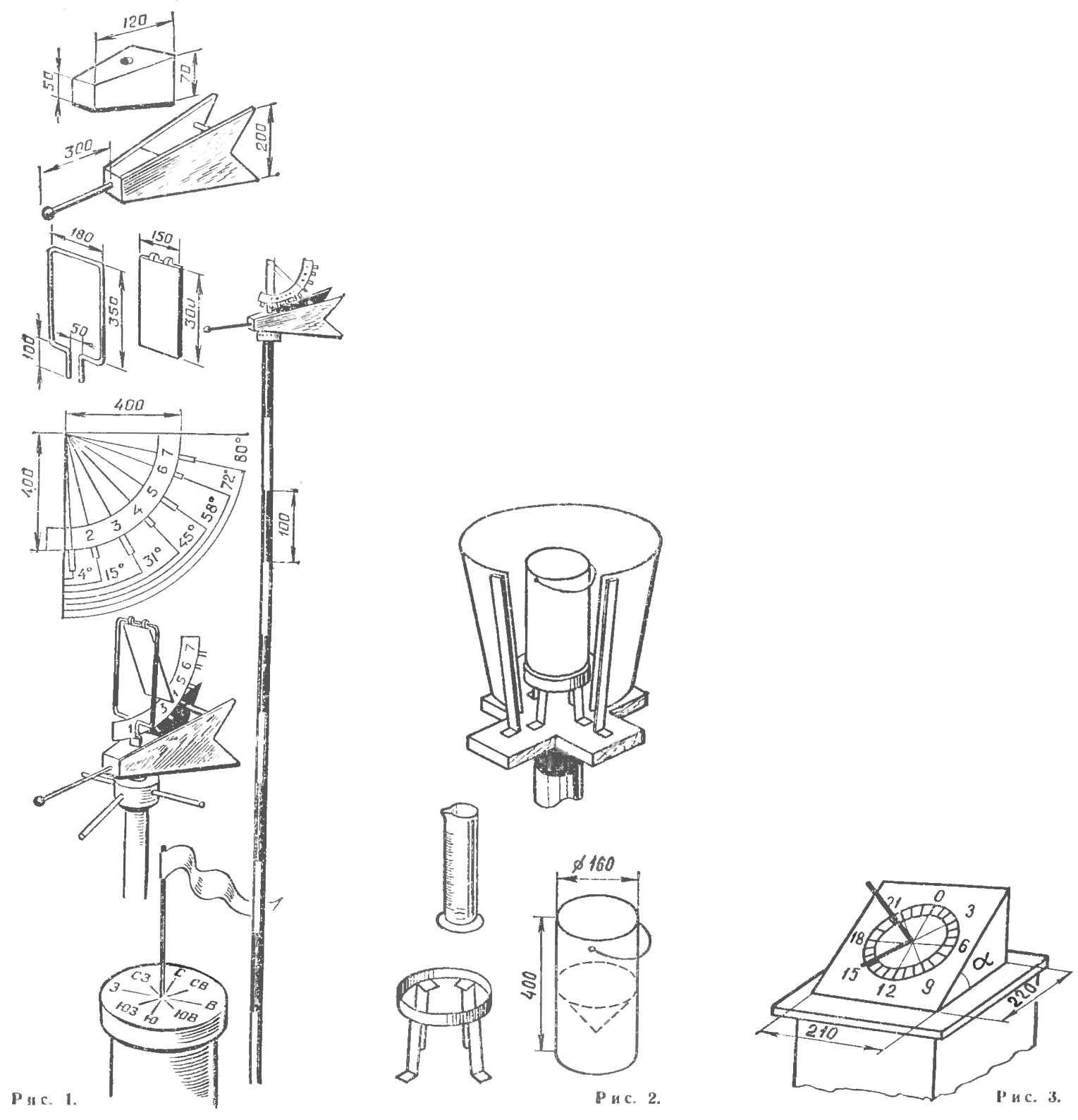 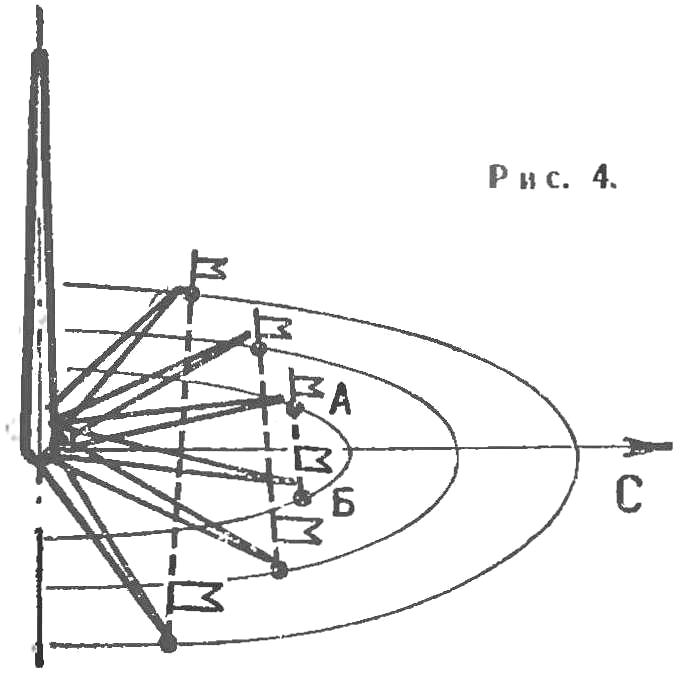 Rain gauge (Fig. 2). To account for precipitation can be used … a regular bucket. However, it is better to make a special rain gauge. It is a cylindrical vessel 0 160-220 mm and a height of 400 mm. the bottom of the container are soldered inside the funnel for draining precipitation. Under the funnel side — valve, closing tube, through which water is poured from a rain gauge in the standard beaker. Each of the ten divisions of the beaker must correspond to a layer of water in the rain gauge height of 1 mm.
Rain gauge set in the open, on a pole height of 2 m. rainfall is not eroded, the vessel is put in a tin funnel, the upper edge should be flush with the edge of the vessel. Protective funnel attach to the pole. Measurement of precipitation is done once a day, at the same time, it is better in the morning.
Solar Equatorial sundial (Fig. 3). Thanks to them you can tell time by the sun, And they are called Equatorial because the surface of the dial parallel to the line of the celestial equator. Two boards of size 300 X 300 mm (can be more) cover with white paint or colorless nitrocellulose lacquer, so they are less subject to atmospheric influences. On one of the boards indicate the circumference Ø 100-150 mm and divide it into 24 portions (each corresponds to 1 hour).
In the center of the circle vertically relative to the surface of a reinforce of thin rod. The shadow from the moving gradually “dial” will play a part clockwise.
The angle of the dial relative to the Board-the basis is equal to 90° minus the latitude of the place in which you live. Making sure that the shadow from the stem at noon falls on the appropriate division on the dial, attach a clock to a horizontal wooden base.
The gnomon (Fig. 4) is used to define the Prime Meridian line. Can be manufactured with a smooth square Board of arbitrary size, covered with white oil paint. The Board set a metal rod with a pointed top. Its height should be such that the shadow of he reached the edge of the Board.
The gnomon is ready place on a table with a height of 1 m, the short side facing South. For an hour or two before noon, mark the Board with a letter And the end of the shadow from the stem. Then the compass guide from the stem circumference, the diameter of which is equal to the distance from the base of the stem to the point A.
Closer to noon, the shadow becomes smaller, and then increases. When she crosses the circle, this is the place designate by the letter B and connect point A straight line, whose center — point is connected to the base terminal and represents a line half a day. Mark of oil paint.
Compass and gnomon let you know the magnetic declination — the angle of deviation of the magnetic compass from the direction of the geographical Meridian. This compass put the gnomon on the line for half a day. The angle of deflection of the compass from the line half the day is magnetic declination.
It must be remembered that for demonstration of magnetic declination gnomon should not be near any iron objects, as they can affect the deflection of the compass.
Netoskop (Fig. 5) is used for calculation of cloud speed and direction of their movement. Is a Hoop with attached criss-cross four pieces of wire. One of them must be put exactly in line half a day.
Wrap after Assembly, is mounted on four pillars height of 2 m. At the ends of the wire, which is directed along the line for half a day, will strengthen the large letters C and u, and on the other, crossing at a right angle to the first — In and Z. At the ends of the other rods are attached, respectively, NE, SE, NW, SW.
The speed of the clouds is calculated in the following way: suppose that the observer’s eye is below the Hoop 50 cm, and the cloud is at an altitude of 2000 m. Thus, the distance from the eyes to wrap to 4000 times less than that of clouds. Hence, the diameter of the Hoop is 4,000 times less than the distance that is actually covered by the cloud for as long as monitored within the Hoop. The diameter of the Hoop known — 2 m. by Multiplying we find that the cloud in 5 min. have passed 8000 m. its Speed is equal to 1600 m/min, or 26.6 m/sec. 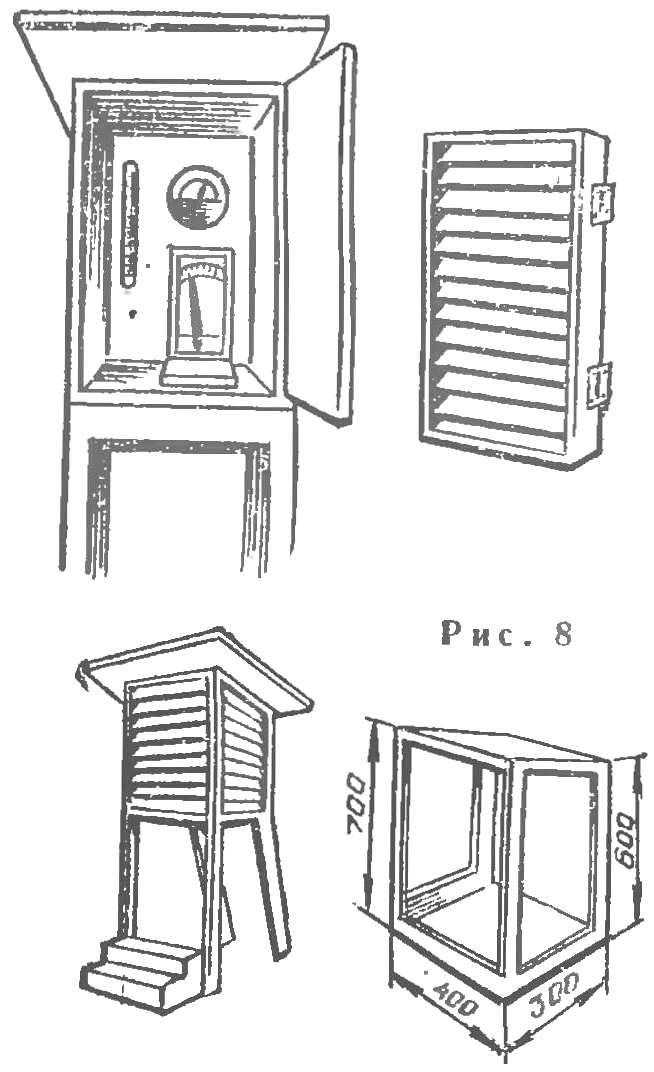 The inclinometer (Fig. 6). This device will allow you to determine approximately the inclination angle of the subject site relative to the horizontal.
To craft it you need the protractor with graduations, a rod of length 1 m and plumb. A plumb line is attached at the center bottom edge of the protractor, which, in turn, can move freely on the rod about its axis.
If you want to measure the angle of inclination of, for example, educational field or school site, the goniometer must be set so that it was parallel to the surface of the soil. The angle formed by the plumb, and show the value of the slope of the field.
Vertical Pomer (Fig. 7). It can be used in the days of the equinox to determine the geographical latitude of the place. Of plywood, cut out the half circle Ø 250-300 mm, it is applied to the scale; in the center of the semicircle, attach the arrow to the zero position of the goniometer, and from a point 90° to the lower a plumb. To control its position is the triangle.
The clinometer on the rod set on the base so that the zero position coincides with the horizontal plane. Latitude is determined as follows: at noon, the arrow is directed to the sun is determined by the height of his state; then the angle measurement is subtracted from 90°.
For example, if the observation shows that the height of standing of the sun using 34° 55′, latitude equals 90° minus 34° 55′, that is 55° 45′.
Weather house (Fig. 8) protects from sunlight, rain, snow in it tools: psychrometer (a device for determining temperature and air humidity) and a hygrometer — a device for determining the content of water vapor in the air.
Wall boxes made in the form of blinds, connected on hinges, and the top is closed with a wooden lid. The distance from the earth to the instrument in the booth — 2 m.