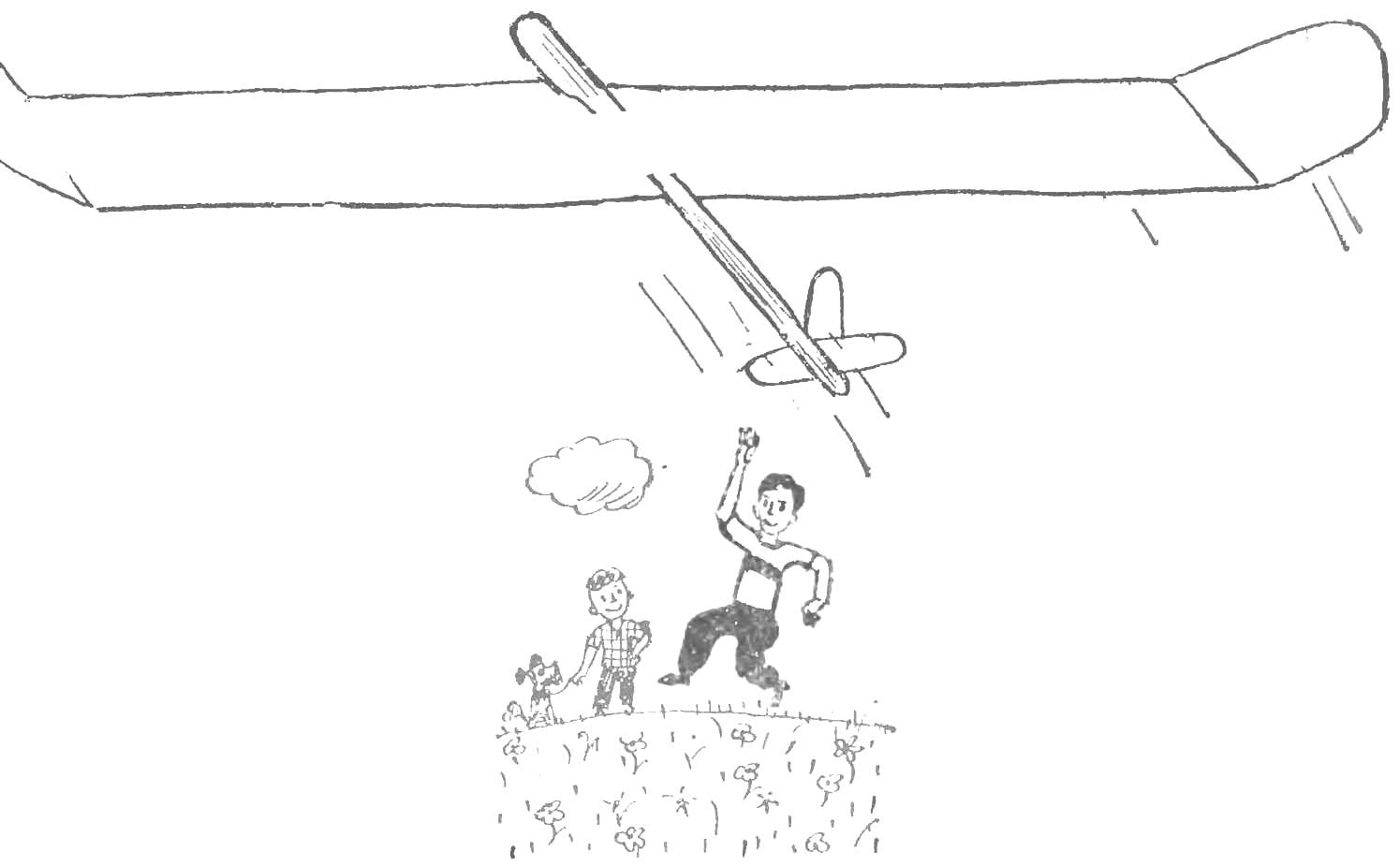 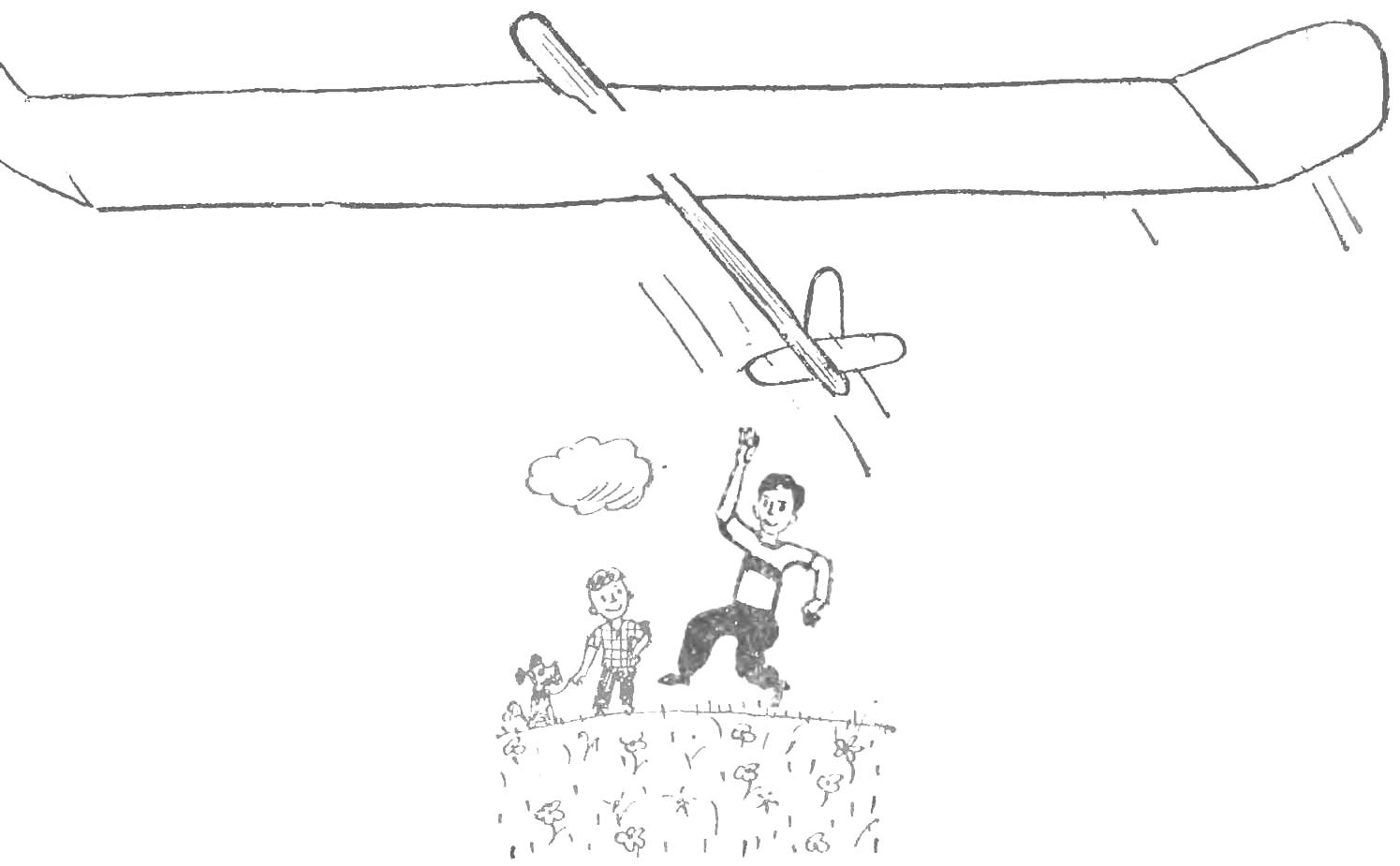 Svobodnaya “out of fashion”. Especially young modelers. What is the reason? Perhaps, in the length and lack of entertainment competition? And maybe the disadvantages of the method of manufacture of models of this type? In fact, if in the first year of studies in the clubs, build conceptual models, the second — planned complex fuselage model. That’s why the need to create a new expense of building a traditional class of models for modelers working in the groups the second year, is dictated by life itself.
At the time our journal has proposed the introduction of class rezinomotornaya models “Winter prize”. Repeatedly held by such models. Time and again we have published and proposals on models of gliders A-1.
To design, build and start flying a glider A-1 is lighter than glider A-2. But the design of the A-1 includes details of the smaller, more difficult to manufacture. At the same time, random error in the shape of the fuselage, wing and tail surfaces, distortions, improper location of the center of gravity and angle of attack are manifested in such models is considerably less than the larger. This is due to the following reasons. At flight speeds above 5 m/s the flow around the wing of the glider A-1 with a chord over 100 mm occurs above a critical level. Increase the resistance when the flow around the wing due to errors in the shape of the profile is less than gliders A-2.
In 1973-1974, the model aircraft, the sub-Commission of International aeronautical Federation (SIAM) held a competition for the best design of the airframe A-1. Requirements for models are as follows: the area of the bearing surfaces 17 to 19 dm2 minimum weight of 230 g, a length of a rail to 50 m. the competition was attended by many countries.
Descriptions and drawings of the most interesting models we propose in this number of the magazine “Modelarz” of Czechoslovakia. 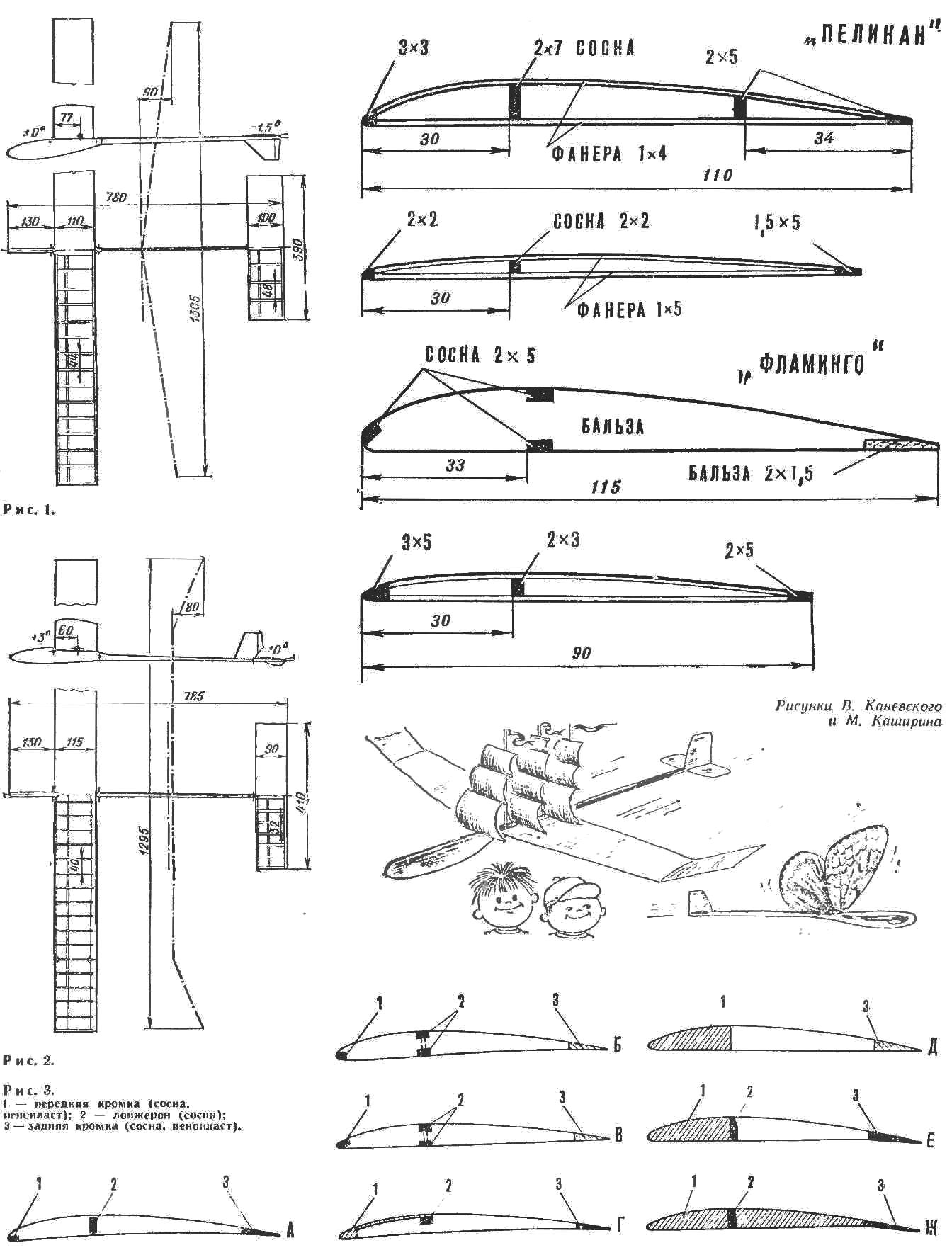 The model Pelikan (Fig. 1) entirely made of abundant materials. The fuselage, in addition to stacked tail — pine plate of thickness 10 mm., the keel is one-piece, pine plate of thickness 2.5 mm. To the bow is glued to the carrier plate with a thickness of 5 mm, to which a rubber thread is fixed wing. It (as stabilizer) stacked design, ribs out of plywood with a thickness of 1 mm and 4 mm wide, inside ribs are two longitudinal section 2×7 and 2X5 mm. Front edge of pine a cross section of 3×3 mm, rear — 2×5 mm.
Weight of fuselage loading is 70 g 135 g all up weight 230 g.
To build a model of “Flamingo” (Fig. 2) along with the domestic materials used balsa. The fuselage and wings are structurally more complex than the glider Pelikan, Efficiency and sustainability of this model in flight above, although the wing and stabilizer applied to a PLANO-convex profile. Maximum thickness of the ribs is at 1/3 from the leading edge. Wing area is 14.9 dm2, stabilizer and 3.7 m2. All up weight is 230 g.
Be aware that in the manufacture of wings and stabilizers with a relative profile thickness of less than 10% is recommended to ensure strength in bending to use two spars (top and bottom), forming a farm. It provides greater strength and elasticity in bending and torsion. However, the location of the spars is broken estimated the basic form of the profile that leads to elongation of the turbulent (severaldays) region flow. In the region above the critical value that leads to a small increase in drag and decrease lift.
The most common types of wing profiles (Fig. 3). Wypakowaniu (A), the spar is placed inside the rib. In this case there is a deflection of the covering, the thickness profile along the span are different.
In profiles B and spars form the farm, the bending strength is high; the design is more time-consuming.
Profile D is suitable for wings with a small relative thickness, it is recommended when minor stresses of bending. Widely used in the manufacture of stabilizers.
Profiles F and g can be recommended for planes of small size; they are made of balsa or lightweight plastic. Characterized by ease of manufacture and repair. Recently, the cough many followers among rocketmodeler. 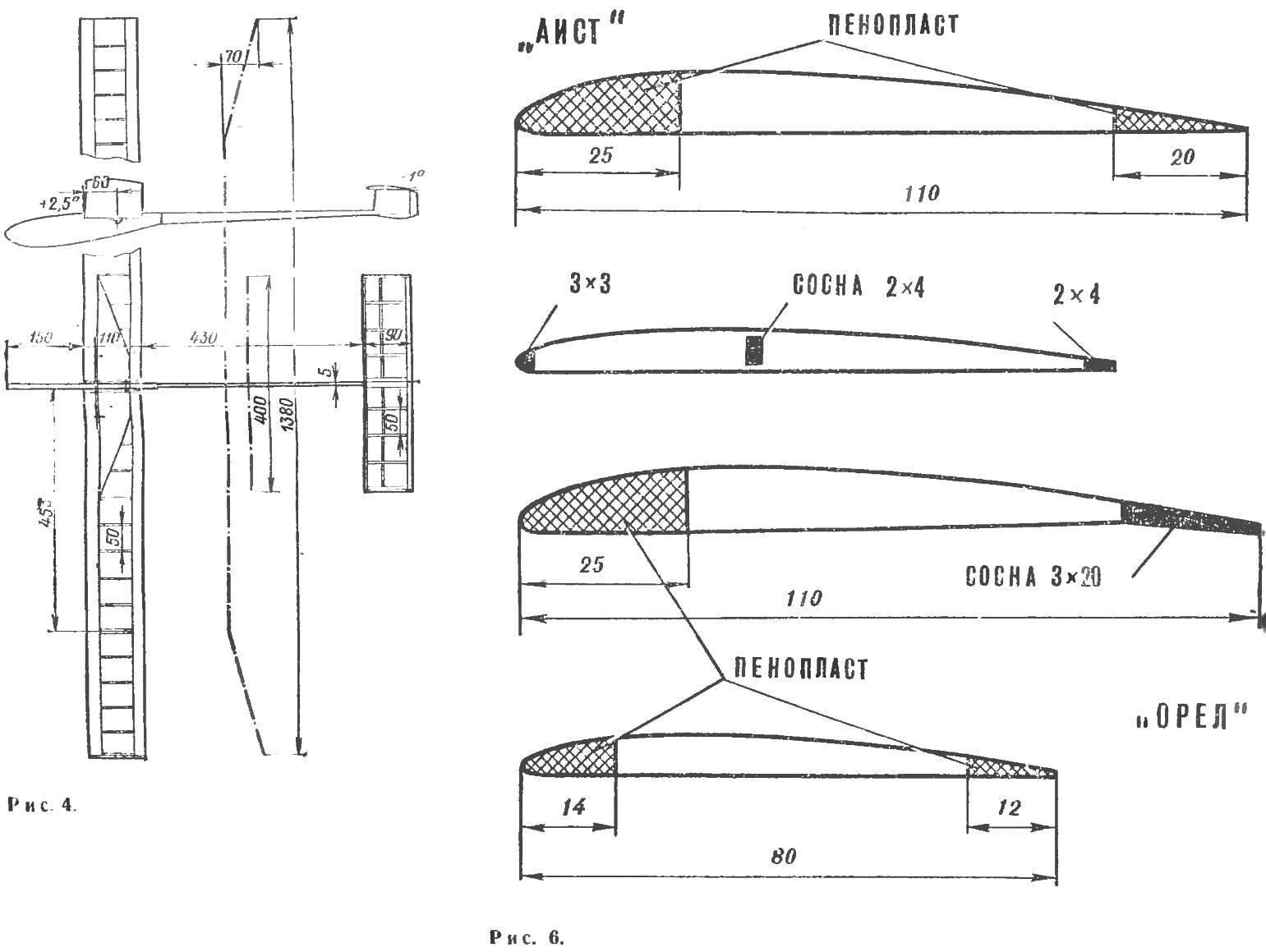 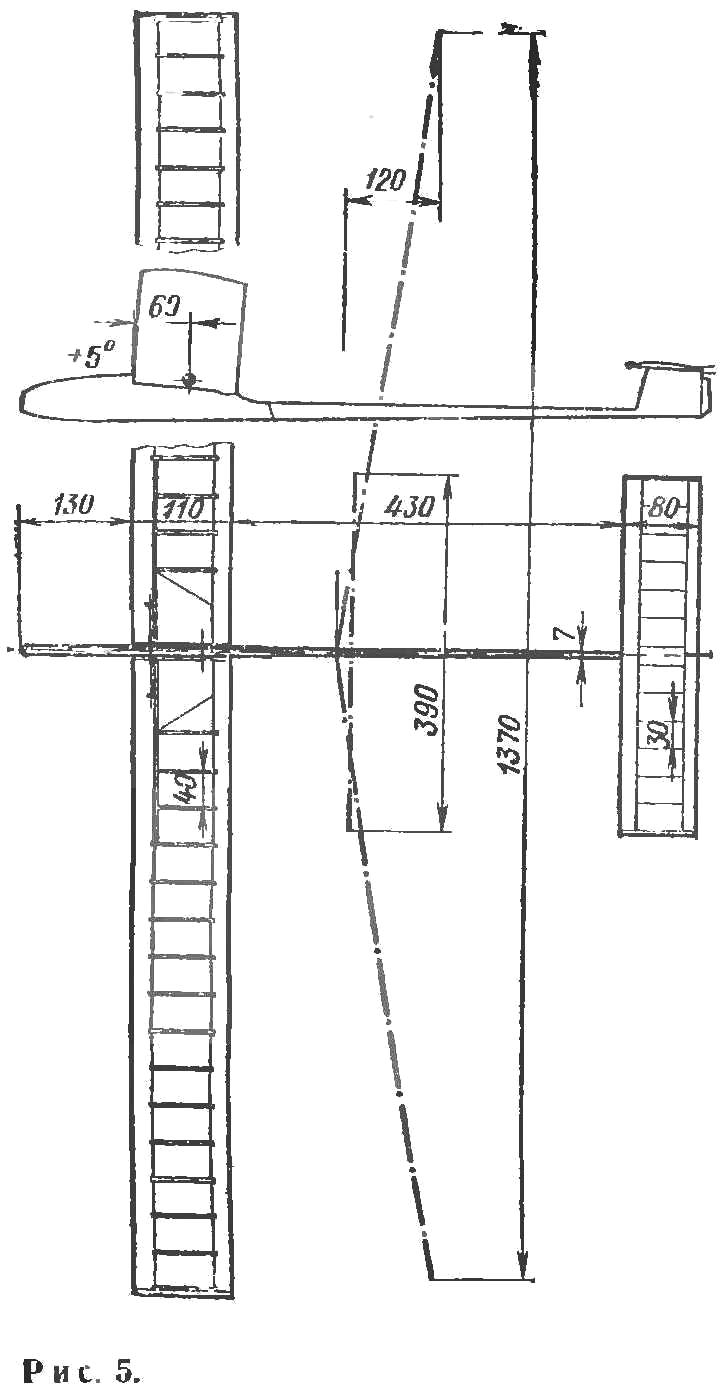 Figure 4 shows the model glider AIST. Its fuselage from lime plate thickness of 3 mm in the front part are covered with millimeter plywood. The location of the fin and stabilizer T-shaped [image stabilizer is on the tail). Wing — from two halves, fastened to the fuselage the main pin of steel wire of Ø 3 mm and Ø 1 mm. auxiliary wing Area is 15.2 dm2, stabilizer 3,6 dm2, weight — 107 g, and the weight of the fuselage with the stabilizer — 133 grams all up weight — 240 g.
Glider model “eagle” (Fig. 5) has a single angle “V” of the wing. It is fixed with two pins of steel wire, Ø 2 mm, mounted in the fuselage. Applied wing profile with a lowered rear part has a beneficial effect on the flying qualities of the model; reduced the gliding speed. Fuselage — balsa plate thickness of 7 mm, the side covered with plywood with a thickness of 1 mm. Structurally, the wing and stabilizer “eagle” and “Stork” are similar.
The model profiles “Stork” and “eagle” is shown in figure 6.
Their shape is determined by the requirements of ease of Assembly. The thickness is selected on the basis of long experiences, with strength and reliability.
The size of the limb the rear part of the airfoil and angle of the model “eagle” picked up in a practical way. A distinct advantage of the “Stork” and “eagle” is expressed in the wing and tail on the fuselage. Auxiliary parts (retaining pins, and fastening the gum) are not harmful resistance.
To reduce it you can also select the corresponding profile, reducing the chord of the wing and stabilizer, cross-sectional area of the fuselage.
V. ROZHKOV, master of sports of the USSR
(To be continued)