On March 28 in Moscow at the Central arena of the sports complex “Olympic” will host the annual sports-entertainment show “Monster Mania” with participation of giant SUVs Monster Truck (Monster Truck).
Monster Trucks are not cars in the traditional sense is a specially designed machine that has impressive specifications and is prepared to perform the most difficult stunts, overcoming huge loads. Mass Monster is over 4 tons and engine power of over 1500 HP, which gives them the opportunity to accelerate to a speed exceeding 110 km/h and jump height more than 6 m. through obstacles and cars.
“Monster Mania” cannot be called just a show or a competition of giant SUVs. This kind of symbiosis of a full-fledged entertainment, sports, and musical concert.
The competitive part of the show between the pilots of Monsters takes place in several stages:
counter – race one-on-one with the jumping over cars and riding on them, the results of which the winners are the fastest SUVs;
– rotation on the spot (Donuts). Discipline, where to win you must spin a 4 ton SUV maximum entertainment the most number of times on its axis;
– drive on the rear wheels (Wheelie). Here the driver should show aerobatics, because it is necessary, akin to a war-horse, to lift the huge Monster reared up and drive as far as possible in this position.
– competition in freestyle, where the for 60 or 90 seconds, the Monsters will surprise the audience with a large amount of beautiful and high quality different jumps and spectacular tricks, turning dozens of cars in a pile of twisted metal. The most anticipated and unique highlight of this course is to jump back flip (backflip).
The winner of the stage in each city is the pilot who achieves the maximum number of points on the basis of all competitive disciplines.
Participants:
Monster – Raging Bull (raging bull) 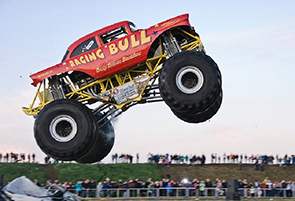 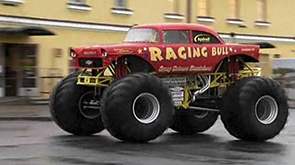 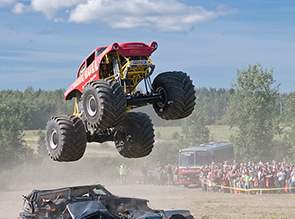 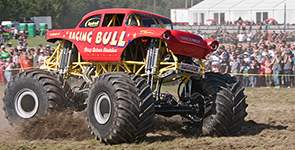 Crazy monster behind the wheel, which sits with a crazy European pilot. It is better one time to see in reality. To describe the tricks and manner of driving and the driver is not possible.
The monster Swamp Thing (Swamp thing) 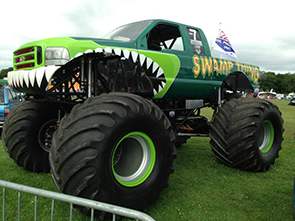 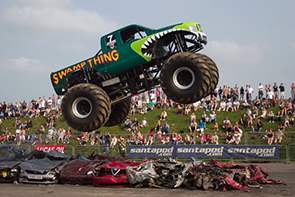 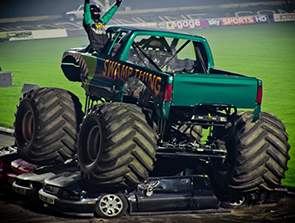 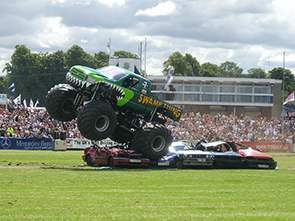 Monster Swamp Thing is a monster in the truest sense of the word. With its engine power of 1800 HP Swamp Thing will make a worthy competition to contenders. Behind the wheel of one of the most experienced drivers – it will show the highest jumping, the best performance of “wheelies” and persistent fighting.
The story of SWAMP THING
Swamp Thing 4×4 is the new name for a Monster Truck with their rich history. Originally built in America on the chassis of Dan Patrick (Patrick Enterprises), the truck was originally called “Killer of Dragons” (Dragon Slayer).
After holding the American Monster Truck for a number of years the truck was refreshed, he again appeared as “Captain Insano”.
At the end of the 2000 season Monster Truck Racing “Captain Insano” was sent to the UK.
During the winter of 2002 was held the very detailed and more extensive repairs, after which the Monster two years raced with a 3D body. During the winter 2004/2005 the car was updated again.
This time the Monster was equipped with a body 2004 Ford F350 Super Duty Body, painted by Tony Dixon, imitating the old spirit of wetlands.
Specifications Monster Truck: Swamp Thing 4×4™
Body: 2004 Ford F350 Super Duty
The engine With methanol injected 540 Cubic Inch Tall Block, BDS Supercharger by RND Engineering
Transmission: Turbo 400 ZaNNetec
Height: 3.5 m
Width: 3,81 m
Length: 5.8 m
Weight: 5 000 kg
Built: 1994
Monster – Putte 2 (Putte 2) 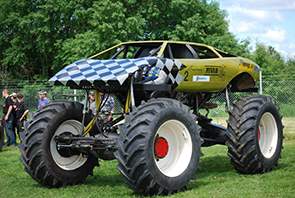 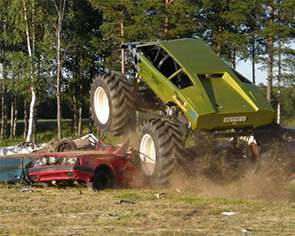 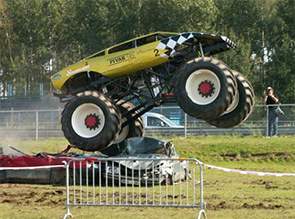 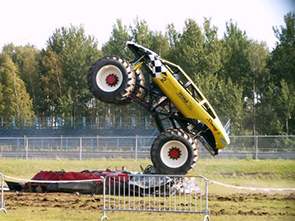 Putte 2 monster – supercar racing series. Lamborghini at huge wheels makes a good impression and has earned a reputation as a monster, always running a step ahead. If you jump over three cars, he jumps through four. If you go over six, it will land in the seventh. The driver is fearless – you will marvel at the stunts in his performance during the freestyle races.
Specifications Putte 2
Body style: Lamborghini Countach
Engine: 540 Merlin V8 cui
Body style: Methanol
Engine power: 1475 HP
Tyres: Trelleborg Twin 66″ on 34″ X 20″ rims
Wheelbase: 3.3 m
Weight: 4700 kg
Monster – Thor (Thor) 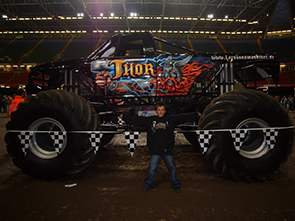 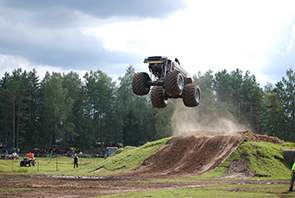 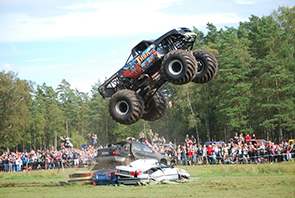 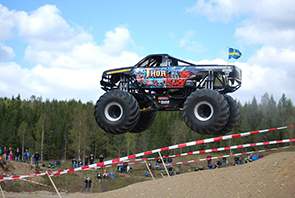 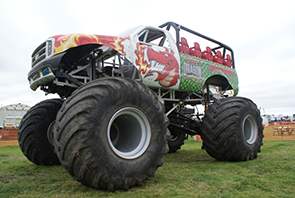 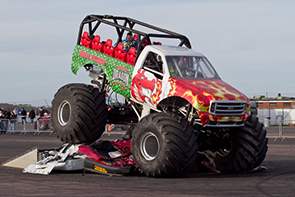 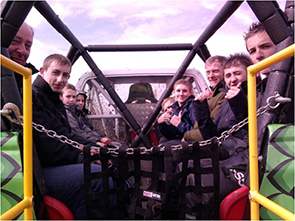 This has never been experienced! You wanted to ride on this monster? We brought it for You! Huge, with 10 seats, he can make you scream of pleasure any.
Additional extreme in the show will make a “flying” masters of FMX — team FMX 13 led best rider Aleksei Kolesnikov, that will demonstrate that motorcycles can not only ride, but also to literally float in the air.
Before the event, the audience can see the Monsters up close, to touch, to take pictures, talk with pilots and get autographs. In addition, in another part of the arena everyone who pre-purchased tickets can enjoy 8 seater passenger Monster Ride Truck.
The show will be held March 28, 2015 in Moscow at the Central arena of SC “Olympic”.
More information about the show can be found on the website mmrussia.ru