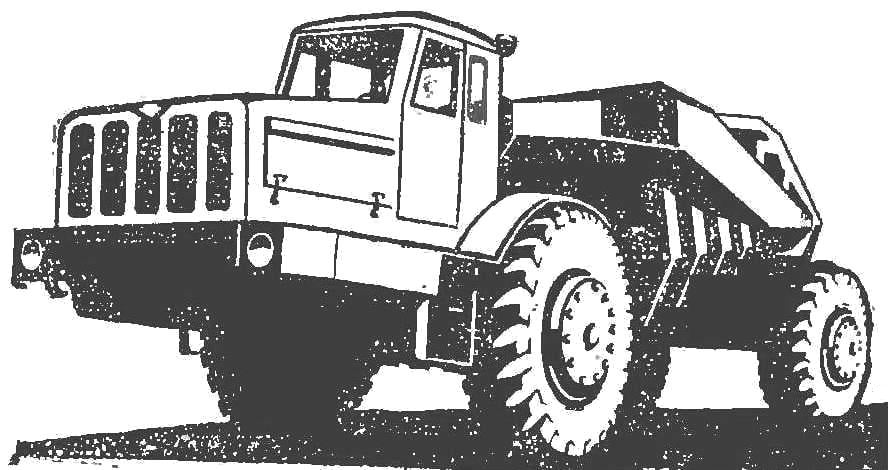 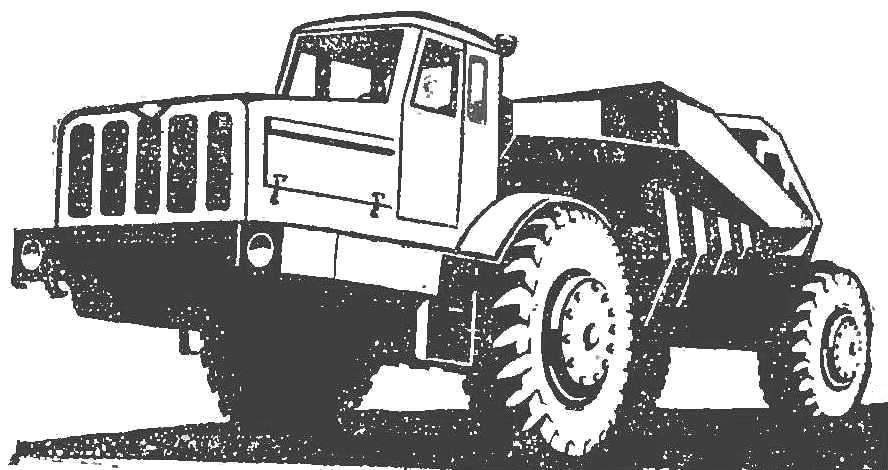 The Soviet heavy — duty vehicles- trucks, tractors, the so-called “off-road”, or career, cars deserve a special discussion. They are a unique design, and it is not surprising that traditional parades of vehicles, carried out at ENEA, these machines often played the role of protagonists. Multi-ton MAZ and BelAZ rises majestically above the crowd of spectators. Interest in the machine called not only the dimensions, the enormous size of the wheels and lifting tens of tons.
The design of the car, it was said, a lot of unusual and innovative solutions. And the starting point of our “supergrubiso and” is YAG-12, a car load of 12 tons, built in 1932 at the Yaroslavl automobile plant. Its feature was the presence of four (!) the leading axes. Managed had wheels of two front axles. Equipped with six-cylinder engine capacity of 106 HP, YAG-12 developed a speed of 40 km/h and weighed with a load over 20 tons and rested on the road with a dozen wheels a meter in diameter. The prototype of this machine was completed in November 1932 and was in the ranks of the demonstrators during the October celebrations in Moscow.
Tests showed that the B-12 has good maneuverability, reliable, but needs the engine capacity of 130-150 HP These motors in those years have not yet produced, and then build a prototype to work on this interesting car did Not go.
Serial production of trucks giant was only launched 18 years later. In September 1950 the first 25-ton dump trucks MAZ-525 out of the gate of the Minsk automobile plant. These cars were urgently needed in the national economy on the development of coal and ore by open way, the construction of large hydraulic structures. They had to work together with the powerful excavators, and it is this combination ensured high productivity.
MAZ-525 was the first representative of the Soviet dump trucks, had the most interesting design features was considered to be the achievement of our autostructure. In the summer of 1951 it was demonstrated at the all-Union agricultural exhibition in the pavilion “engineering”.
The altitude of the MAZ-525 — in two human growth. If you stand next to him, the floor of the driver’s cab is at the level of fingers raised up his hands, and to get into the cockpit, it is necessary to climb the ladder, resembling a ship’s ladder. In the back of the car sits a passenger car, but under the hood he has a 12-cylinder 300-horsepower diesel engine of the same type that was used on the famous T-34 tanks. In the hub of the rear wheels integrated planetary gear and the wheels are fitted with huge tires with a diameter of 1.72 m. Each tire weighed 340 kg. Empty the machine weighs is 24.4 tons, and with cargo — 49,5 t
To perceive this load took a powerful frame made of channels with a height of 400 mm. Rear axle is Rigidly attached to the frame, because there are no springs would not survive impacts from falling into the back of the bucket 6-cubic excavator pieces of ore or rock. The front wheel, which even at full load accounted for only 34% of the total weight, have a sprung suspension. 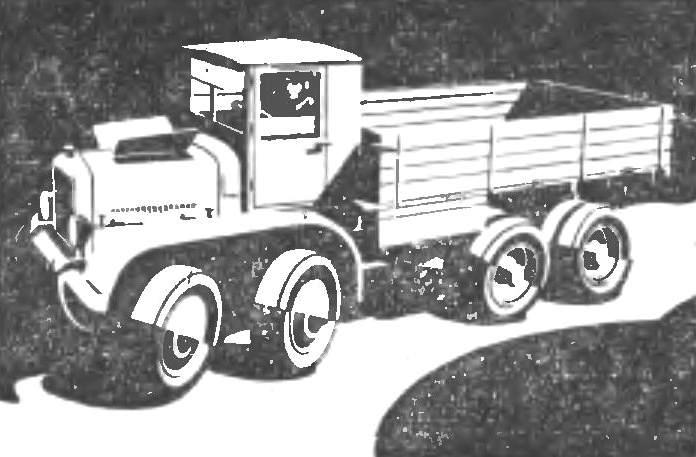 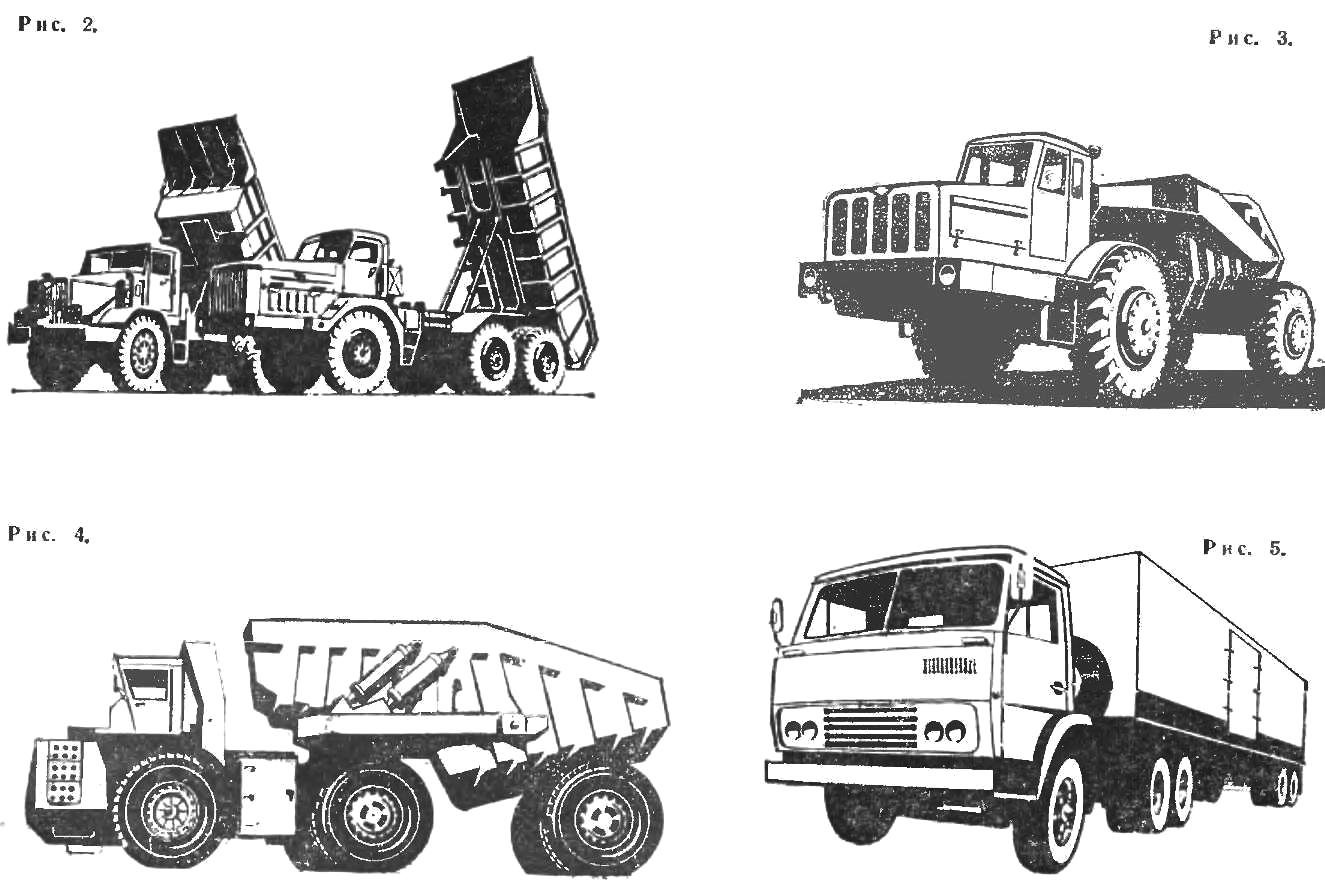 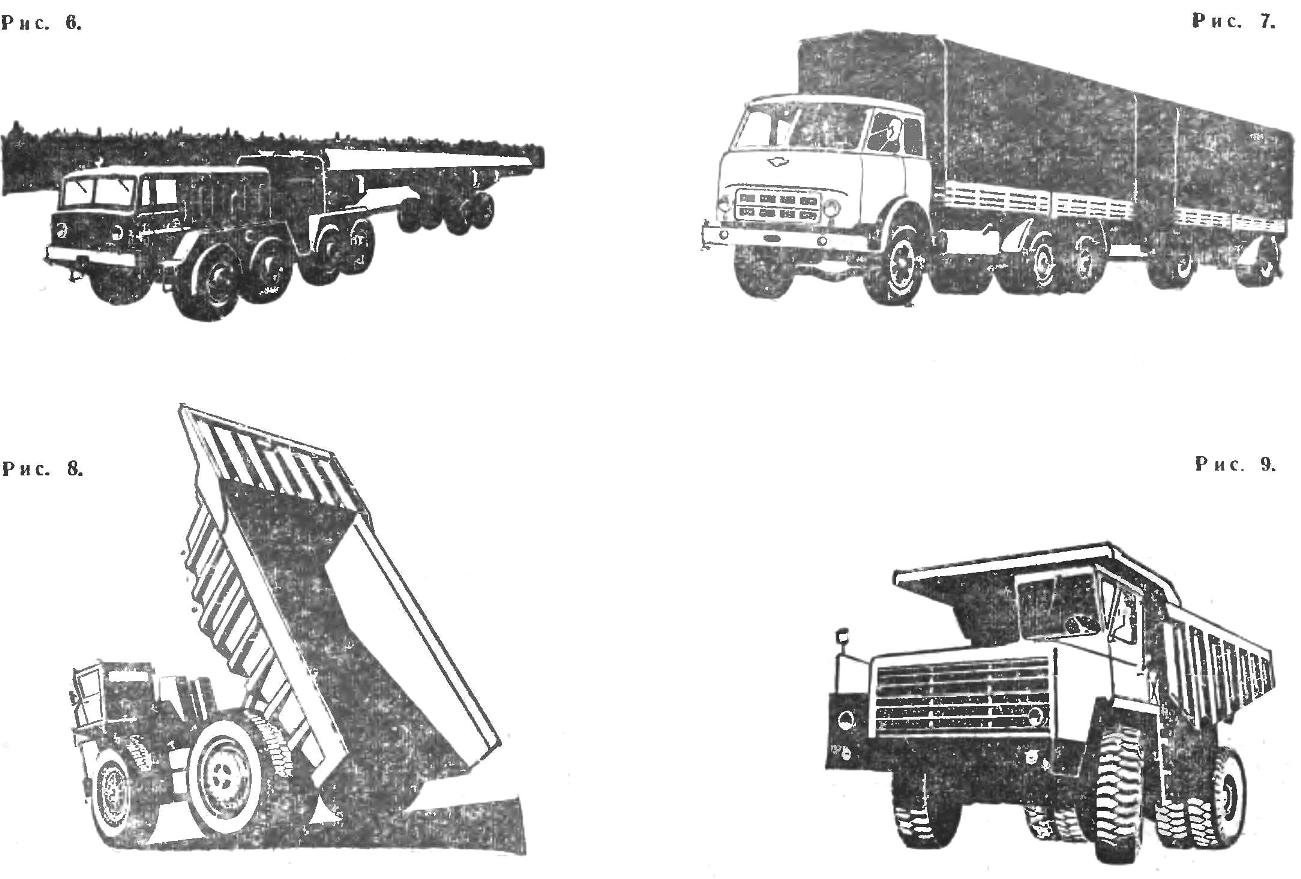 Fig. 2. MAZ-525 and MAZ-530 (right).
Fig. 3. MoAZ-529Е.
Fig. 4. BelAZ-549В.
Fig. 5. KamAZ-54102.
Fig. 6. The MAZ-537.
Fig. 7. MAZ-515.
Fig. 8. BelAZ-549.
Fig. 9. BelAZ-548А.
It would seem that to manage such a giant is not easy. However, to help the driver designers MAZ-525 for the first time in the history of the freight car industry has included power steering, air brakes, a hydraulic clutch in the transmission.
Hydraulic lift for 40 sec. Throws ago at 62° the body capacity of 14.3 m3. 25-ton dump truck turned out to be quite maneuverable despite its 8,5-metre length, turning radius cars accounted for 12.8 m.
Dump trucks MAZ-525 successfully worked on the construction of the Volga-don canal, the Aswan dam, the construction of HPP on the Yenisei river.
The practice of these works showed that we need a more powerful machine, and in 1957, the Minsk automobile plant began to produce three-axle dump truck MAZ-530 carrying 40 tons of soil or ore. With the load he weighed 78,4 tons and could reach the speed of 43 km/h On this machine has already been used automatic transmission.
Dignity MAZ-530 was highly appreciated not only by the award of the all-Union industrial exhibition, but also a large prize, awarded to him in October 1958 at the world industrial exhibition in Brussels.
At the end of the 1958 production of dump trucks was transferred from the Minsk factory to a new plant in the city of Zhodino. There at the end of 1961 we began testing the new 27-ton dump truck BelAZ-540. In September 1965, the plant launched its mass production.
BelAZ-540 was the progenitor of a whole family of career cars. For the first time in the history of the Soviet car industry it was equipped with hydropneumatic suspension on all wheels. This suspension was well absorbed as the impact of falling from the bucket of blocks and road bumps and allowed the machine to walk on stony ground with a speed of up to 55 km/h BelAZ-540 as well as other 530 was equipped with hydromechanical automatic transmission, power steering and 12-cylinder engine.
For the creation of BelAZ-540, the Belarusian automobile plant was awarded a diploma ENEA 1st degree. In 1967, diesel D-12A was replaced with a more advanced engine YMZ-240 with capacity of 350 HP, the same that in the same year was awarded the medal of ENEA. A modernized version of the truck received index BelAZ-540А, and he is the first among the Soviet vehicles in June 1967, was awarded the state quality Mark.
BelAZ-540А followed by a new, 40-ton dump trucks BelAZ-548, and later BelAZ-548А. In their design much in common, a lot of standard units. However, a 40-ton giant is already equipped with a 520 horsepower diesel engine YAMZ-240Н. In 1968, for the creation of a family of unified heavy vehicles and development of serial production of a group of workers of the automobile plant was awarded the State prize.
And designers from Zhodino develop new, more powerful trucks. Now is the test of BelAZ-549, is designed to carry 75 tons of soil or ore. It is installed with a diesel engine capacity of 900 HP With this power gear transmission of conventional type would be excessively bulky and heavy. Therefore, the authors BelAZ-549 preference of electric transmission.
The engine drives a generator which produces a current that feeds the traction motors mounted in the hubs of the wheels (this wheel is called “motor wheel”).
Tested at the factory and another novelty — BelAZ-549В. This is the tractor tipping semi-trailer with a lifting capacity of 120 tons. the Trailer as the tractor unit is equipped with a “motor wheels”. Of course, for such a big car need an engine more powerful than the 75-ton dump truck. That is why the 120-ton dump truck (again for the first time in the history of our autostructure) is applied as a gas turbine engine capacity of 1200 liters. 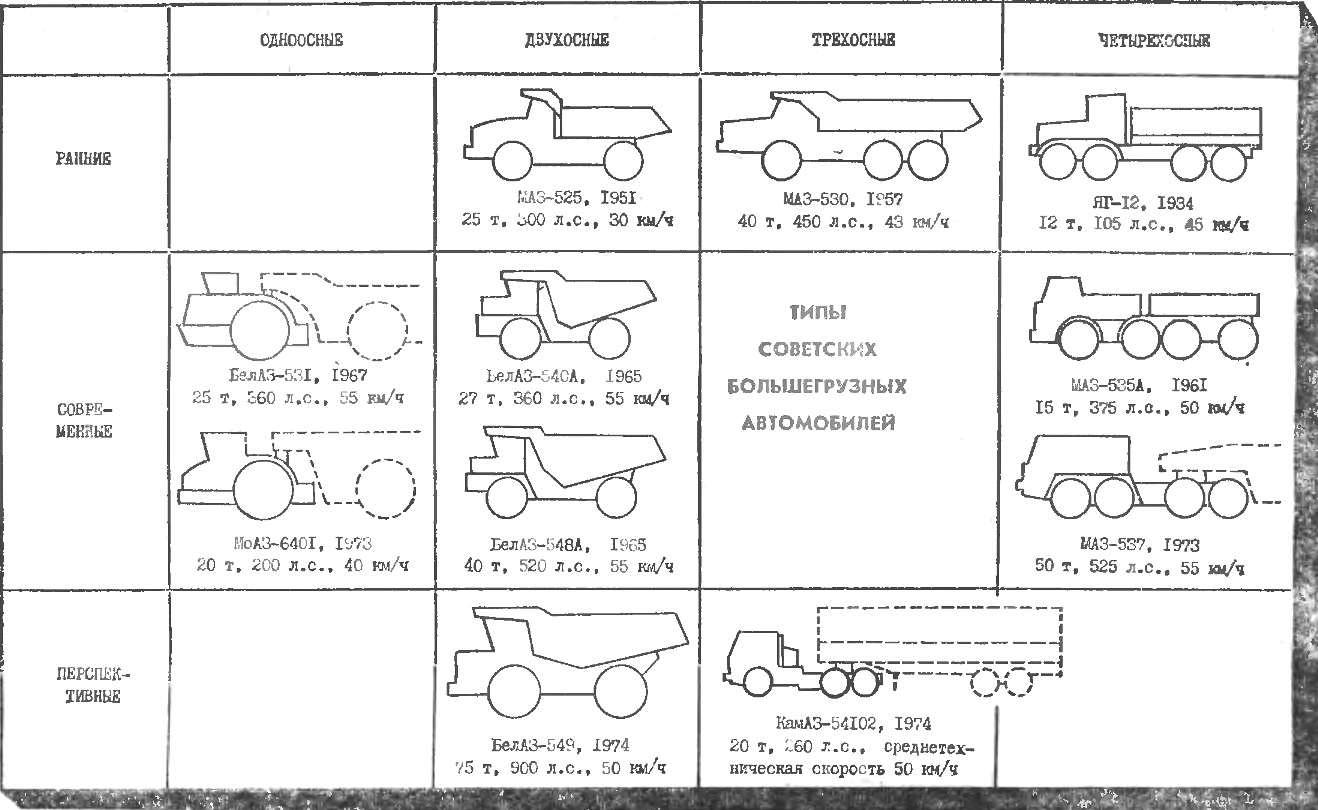 Minsk automobile plant is the ancestor not only of the Belarusian plant. In 1958 he transferred to the new Mogilev automobile plant production of heavy trucks, biaxial and uniaxial. Let as uniaxial? And. The machine is essentially half a car engine, drivetrain, front-wheel drive and fifth-wheel device. It is joined by the other half of the car — two-axle scraper, semless or dump truck, or rather, the frame with the pair of wheels and appropriate body. Included with them a single-axle tractor is a versatile machine which is widely used in the construction.
He Minsk plant continues to work on heavy duty vehicles. Among them, the mighty four-wheeled truck tractors of MAZ-535В and MAZ-537. They are designed for towing trailers with bulky, heavy loads such as drilling equipment in the oil fields, transportation of pipes for pipeline construction. In particular, the “bundle” of pipes (with a diameter of 1.4 m and a length of 36 m) MAZ-537 trucks, towing a special trailer, so-called “placebos”, capacity of 55 t Of the other design features of the MAZ-537 call automatic hydromechanical transmission, independent torsion-bar suspension front tyres and two pairs of wheels, self-locking differentials, huge size tire with grousers, and transmission on all four pairs of wheels. That is a descendant of the first Soviet four-axle truck YAG-121 of Course, these tractors are designed to work in off-road conditions where the pipelines are laid, build factories, hydropower, is drilling wells. And for the carriage of goods by road over long distances is another tractor MAZ — 515Б. This three-axis machine, equipped with a 300-horsepower 8-cylinder diesel engine designed for towing the semitrailer with lifting capacity of 25 tons on motorways with speeds up to 80 km/h is Planned to establish production and three-axis side of the truck MAZ-514 at its base, which can carry 17 tonnes of cargo in the back and 7 t on a biaxial trailer. Minsk automobile plant takes part in the development of machinery for the future of the Kama automobile plant. Trucks of this brand until exist in the form of prototypes, and their release is planned for the end of the current five-year plan. Describe all varieties of these three-axle trucks does not allow us place — in fact there will be three of the family, which unites the 12 major modifications of tractors, dump trucks, flatbed trucks, chassis.
Y. DOLMATOVSKIY, L. SHUGUROV