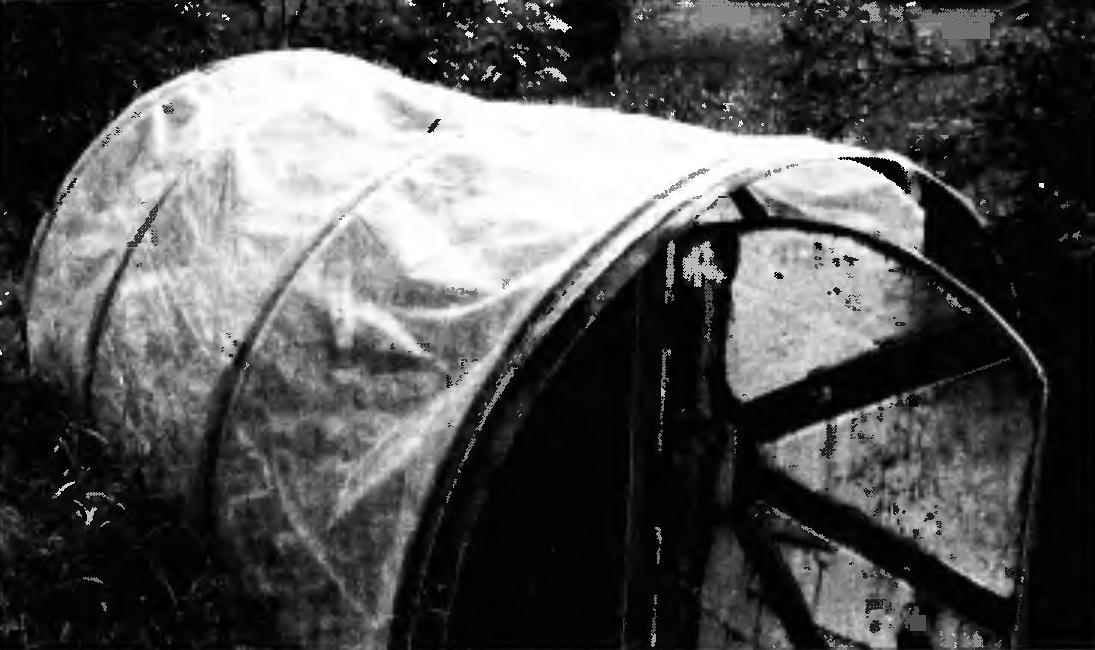 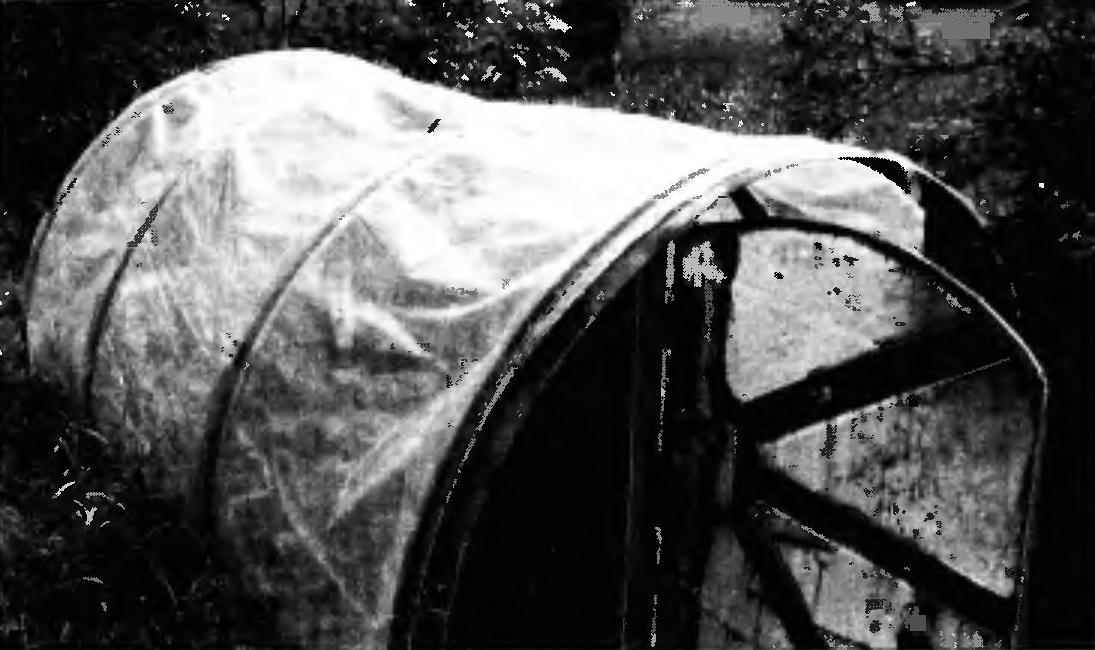 If you wish for your site to have early vegetables — so you need a greenhouse. Only it will be able to create the conditions to maintain a constant high temperature and humidity of soil and air to plants both day and night. Designs individual Galic and greenhouses under the film a lot, and each has its own peculiarity, its rational beginning. Made in industrial conditions, of course, more technologically advanced, but the self-made greenhouses and greenhouses under the film often cheaper, more practical.

To come up with something new is quite difficult. But I still want to offer the option is simple and available for review. What should be the film greenhouse? First of all, it needs good stability, which requires a more or less solid Foundation, and a tight, secure attachment of the film to the frame. The latter is often weak, can not withstand strong winds or changes in temperature day and night. Stable fixation of films is often achieved permanent joints, not allowing to remove and to put on the frame of the film without damaging it.

My design area of 4 — 5 m2 has no Foundation, minimal number of parts and frame easy fastening tape on it, so the greenhouse is easily assembled and disassembled, it is easy to move to another place, which is important for owners of small garden plots. Instead of updating the soil for a new crop just enough to move the greenhouse; to cope with this, and one person.

Common methods of mounting protectors require or to beat her with rods to the frame, or to produce on the film a special loop. I propose to tightly press the frame to the frame “spring-loaded” string. While the film is not damaged. My method is ensured by the presence in the arcs of the frame grooves, into which the film is laid on top of twine strung with rubber rings of old inner tubes. Width — 15 mm; mount to the frame using metal hooks from bar diameter 5 — 6 mm. Tensile of rubber (force 4 — 5 kg) provides a soft and tight fastening. Depending on weather conditions, to install or remove the coating — a matter of minutes. 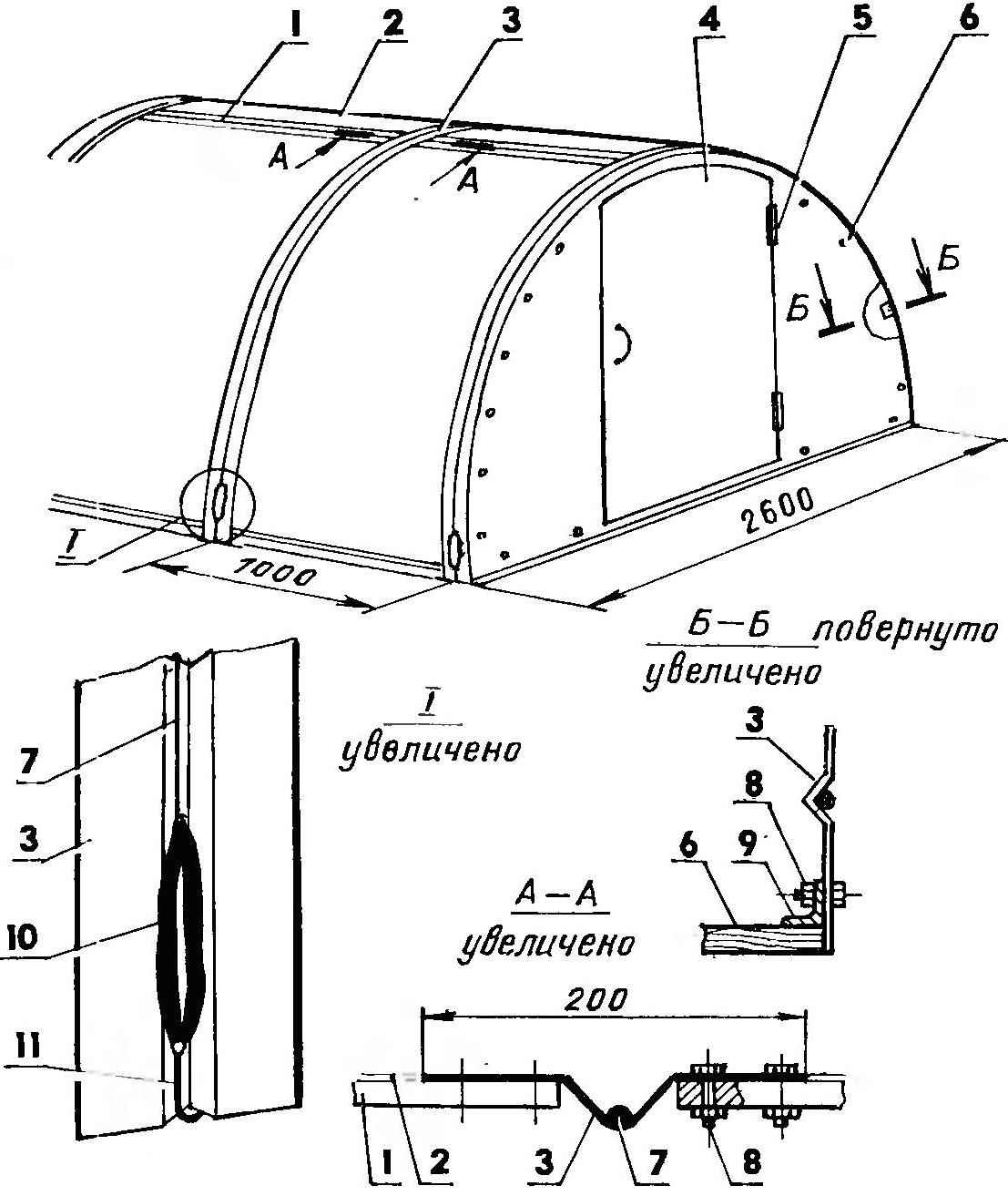 The frame of the greenhouse consists of a sturdy metal arcs, which I used half of a wheel with a diameter of 260 cm from the sprinkler system (now to find these is not difficult). They are very suitable for the greenhouse: on the one hand, the arc is sufficiently high to walk under them slightly crouching, with another — not too large height of the greenhouse provides a corresponding small wind resistance and reduce heat loss. And, of course, the profile of the wheels with the groove in the middle and smooth edges, which is convenient for mounting of the connecting elements.

Arc installed at a distance of 100 cm from each other and are connected by wooden rods or metal strips with the bolts. The ends of the arcs are better to rest on the bricks or boards: this will prevent shrinkage of the structure, special foundations are not required.

In the end the arc shield is mounted to the door. They can be plywood or plastic. The attachment of the shield also carried by the bolts. In the greenhouse shall be free from sharp and protruding parts of the frame that could tear the tape Length of the greenhouse can be easily increased by adding additional arcs. The rear end of the greenhouse just closes the remaining end of the tape, the upper edge of which is also attached with string, and the bottom is pressed or prikatyvaet the ground. For ventilation it is most convenient to access this Highlander, as a film it’s easy and fast to install leans back. On a hot day additionally opened the door.

Greenhouses under the film described the design used on my property for seven seasons. Tape and twine are three or four years, the rubber ring is about two years.