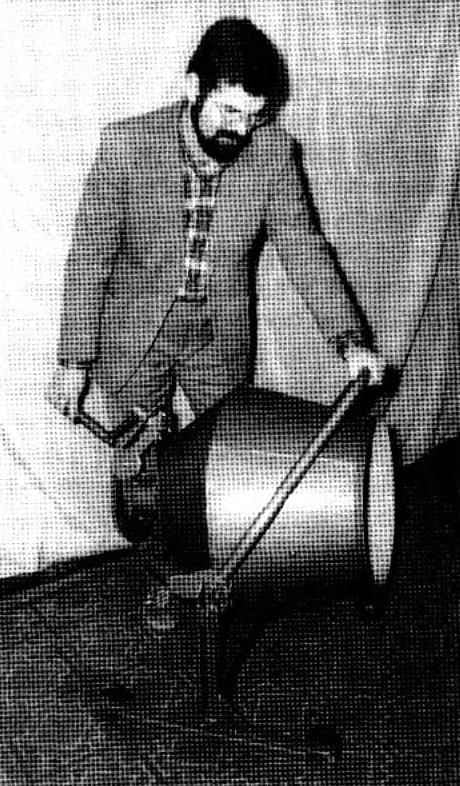 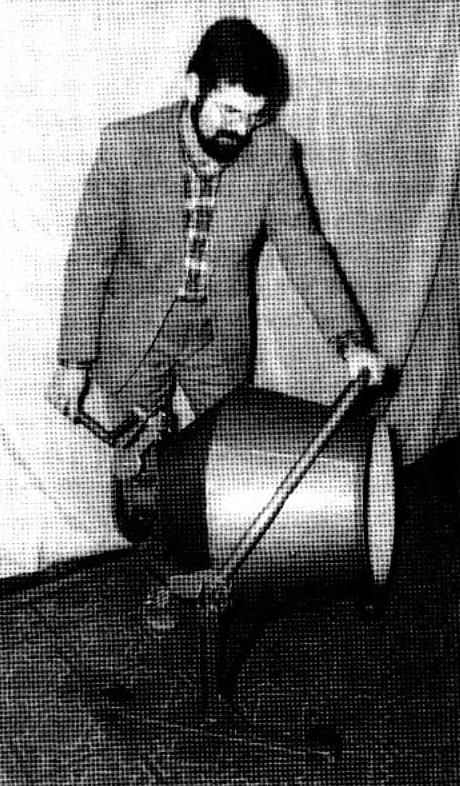 In the Russian language a lot of words-omonimo that are pronounced and spelled the same, and the value have different and even opposite. Such a fate, for example, the word “interfere.” In the first sense — letting, and in another — to connect, making the mixture homogeneous. Interestingly, the principle of operation of such machine, as the mixer, get along well both of these concepts: some parts are intended to move part of the material loaded in the drum, and others — not to allow to move the other part, which is the mixing of the components.

So, undertaking the construction of a large, not very small or even without the mixer will not do: it will help to save forces and time, and the quality of the cooked mixtures should be improved.

This technology is, of course, you can buy (in the sale they are many different models and designs). Only because at this time money is needed to purchase materials, and the mixer can be done yourself — for example, here such constructions.

The proposed mixer consists of three main components: a truck-base, drum and drive (manual, mechanical or electrical). The drum drive are mounted on the frame, and the frame is hinged at the base. The frame is welded from arc-arm and the arc of the base, connected pads and inserts. Handle is made of pipes with a diameter of 34 mm, and the base is made of pipe diameter of 51 mm. To the base of the welded bracket on which is mounted a mixing drum drive.

The supporting base part is made of a channel number of 6.5 with a wall of size 65 mm (4.4 mm thick) and shelves on 36 mm. All connections of these parts back to back, reinforced gussets from sheet steel.

The mixing tank (drum) is a traditional pear shape. To obtain the hull is in steel sheet of 3 mm thickness and is composed of three simple parts: a flat bottom and two truncated hollow cones (upper and lower) with the same large bases. The diameter of the small base of the lower cone corresponds to the diameter of the bottom, and the handling hole of the upper cone is made with the strip (by the rim). Inside the drum to its walls welded to the three ribs of the longitudinally slit thin walled steel pipe with a diameter of 60 mm. These ribs also perform the additional role of blades. The blades made of steel strip section 30×3 mm and attached at one end to the bottom, and the other to the wall of the upper cone. Plus, they are still and struts. All these details provide the necessary rigidity of the mixing drum with a relatively small thickness of its walls, as well as contribute to the efficient mixing of components, making the mixture homogeneous.

The drive of the mixer — hand, or, as they say muscular, but essentially it does not change. And in order to give effect to it could not only uncommon strength of the man, but even “thin” people, it is equipped with the original V-belt drive which is mounted on a small frame. The feature of transmission is that for the convenience of the location and rotation of the arm drive pulleys (slave and master) are not located as usual in the same plane and at an angle to each other. Well, the V-belt did not jump out from the streams of the sheaves in the intersection of the planes (inflection belts) are mounted support rollers. V-belt reduction gearing significantly reduced the necessary torque on the handle. This allowed her to perform very small length, which also increased the ease of rotation. 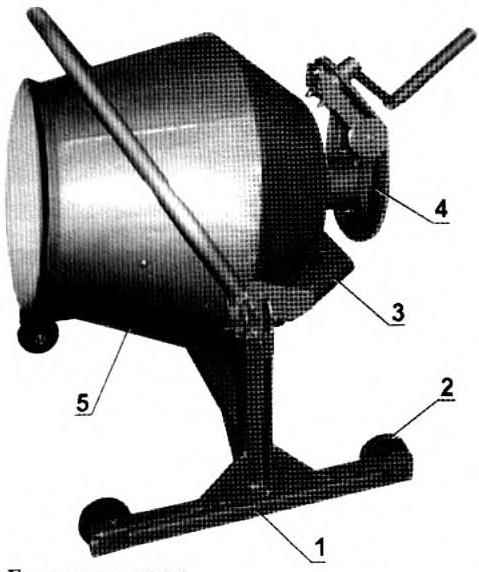 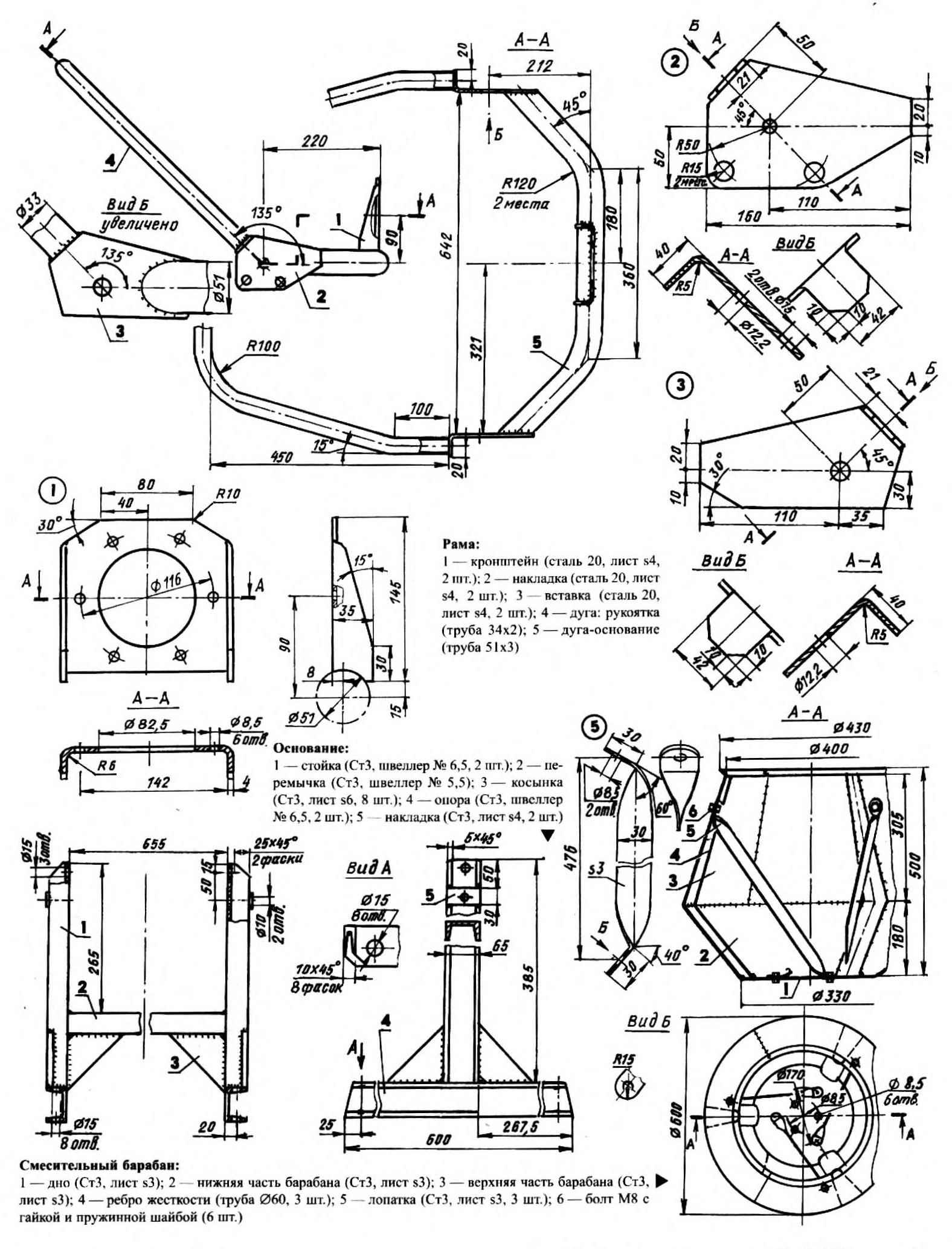 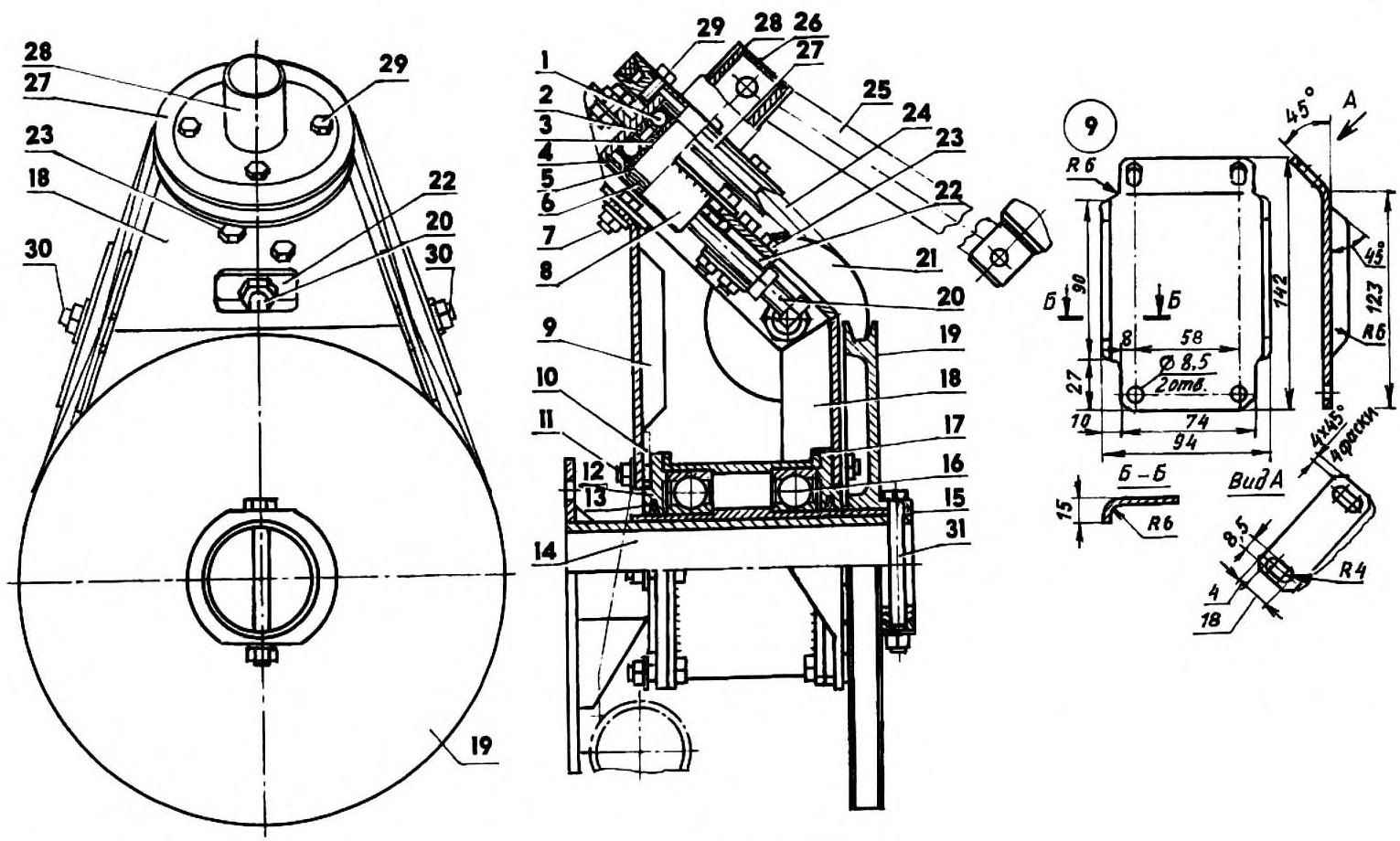 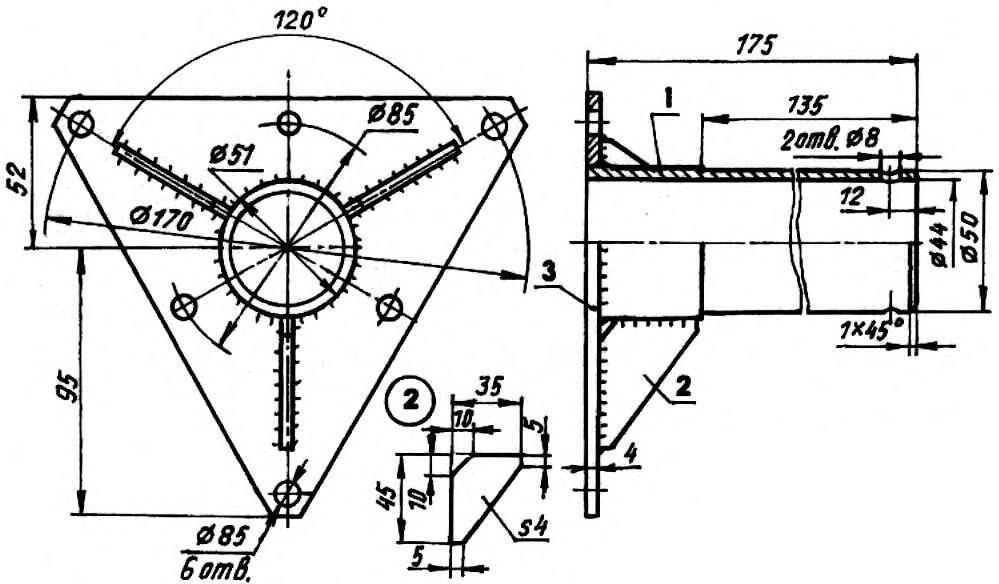 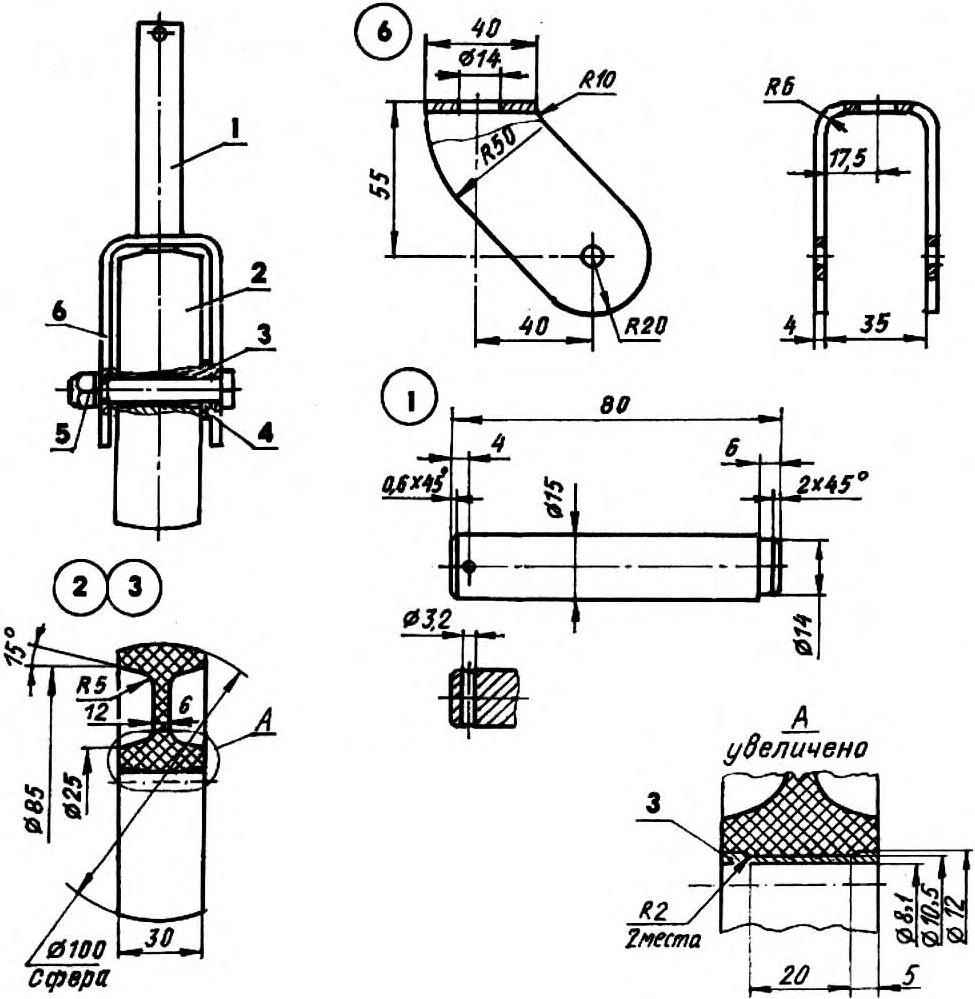 The actuator lever is made removable — for this it is enough to dismantle the taper pin that secures it on the shaft.

With the same purpose of facilitating the work on the machine shafts of the drive mechanism are mounted in ball bearings. To exclude the ingress of dust and dirt the bearing housings are closed Salnikova seals or caps.

Betonomeshalka — compact and relatively light weight (about 60 kg), it would be irrational not to use these advantages and not make it mobile. Therefore, the base mounted on four wheels. However, in the first embodiment (in the pictures) the wheels are made navorachivayutsya. Operation showed that this variant of execution is not the best to move the unit in a straight line, of course, was possible, but turn very uncomfortable and even difficult: it had to lift the front or rear wheels (sometimes with a loaded “pear”). Therefore, having scolded myself for hindsight, did the other wheels — swivel (see pictures) — with the mixer can be deployed at the site, even downloaded and effortlessly.

Another advantage of the Assembly — the actuator can easily be mechanized, putting the internal combustion engine or electric motor with appropriate gear. The unit and the remodel is not necessary, but you should only throw the V-belt from the pulley on the shaft of the handle on the pulley output shaft of the gear motor and the handle drive shaft to remove.

And in conclusion — a couple of tips.

First. In betonomeshalka you can cook almost any type of mortar based on mineral binders: cement, lime, plaster, and even clay. But to stir the components better first dry, and then add a little water during the mixing process. It is desirable for the water to pour a certain amount, depending on the amount of cement in the batch (water / cement ratio of about 0.4). The excess water, of course, facilitates and speeds up the mixing process, but significantly reduces the quality of the mixture — makes it porous.

The second piece of advice. After finishing work, even fatigue, it is necessary to clean all the parts of the mechanism from the remnants of the mixture and to wash them. Here the excess water will not interfere.