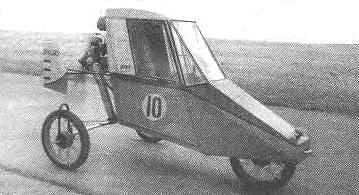 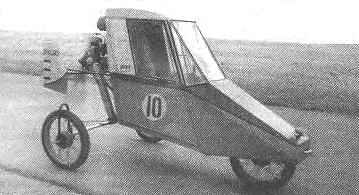 The propeller as the propeller has long attracted my attention. When the “Modeller-designer” were published about cars, it convinced me to make a similar design.
Maybe in the proposed aircar (or rather to say – aeromotor) no special innovative ideas, but the value of it is. he is quite simple and make it possible even for the novice designer, lover from available materials and components using conventional hand plumbing and carpentry tools. Parts that require machine work, almost there. However, the frame needed welding machine.

From the description aeromotor, want to do that before starting the transport of the machine, I usually draw her a sketch of the General form in three dimensions at the scale of 1:10 and on it draw a layout relative placement of are-Gata and mechanisms But this car was different — most of the nodes assemble in place. The hook size listed on cheriah, removed from already made designs and therefore approximate.

Aeromotor frame — welded, spinal type (single-spar). Made from water pipes of different diameter. Thus, the main power elements, the spar and podmetina suika at its rear end from the pipe outer diameter 50 mm; the cross-beams and struts with 30-mm thick, and the console fence propeller of a 20-mm tubes To the front end of the spar (under ppom) progynova bushing steering column from a moped “Riga”. Here, under the front end of the spar is brought and the supporting strut, and a bottom front cross-member, which is connected with the spar in the center of the back of his long cross brace Welded together these parts form a hard power triangle.

In the pre-cut holes in the side member is inserted and welded to it two cross-beams with plate brackets on the outer ends for the fastening of frame elements of the cabin. 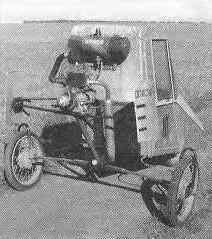 At the rear end of the spar mounted on top of a sub stance and also Podkrepa his brace. To the upper end of the rack is welded and an area for attaching rotor of the power unit. and two-way console fence of the air propeller with angle brackets which are screwed pogom plate brackets, and struts and duralumin plate fence propeller. The plates also serve as stabilizers and stability of direction.

In the middle of the longitudinal sides are welded two pairs of angle brackets is attached to them with four bolts M8 seat base, used tractor DT-75 and to the rear ends of the longitudinal welded two angled bracket, which is attached to rear axle beam. Bridge aeromotor a rather original – it is not hard, and elastic, as its beam is made of spring indigenous leaf suspension cargo truck GAZ-53, and therefore is shock-absorbing element.

Rotor installation make their first substitution with I from the power unit and pushing air win. As the power unit used starter motor of the tractor T-40. Gasoline engine, two-stroke, with a power of 8 PS with a maximum speed of 4200 per minute.

The engine is slightly altered. Firstly to reduce the diameter of the flywheel to 150 mm and bored through its rim (edge) polugruppy groove — it before starting the engine fit the round bottom of the launcher cord. At the foot of Carter secured the roller (its axis perpendicular to the axis of the flywheel). Thus, passing the cord in his rucio running has the ability to moved away from the plane of rotation ninta Here I’ll note that before starting the engine, under the wheel-kladiva, front and rear, solid steel Armonia “boots”.

Second cut from the gear unit back, leaving only the attachment studs for podstanovki magneto (it is mounted on the plate).

And third. Because the motor is behind the cab and it is blowing counter-flow of air is difficult, the engine was equipped with a homemade device forced air cooling. It is not complicated. Three-bladed impeller fan with a diameter of 150 mm is cut from duralumin sheet thickness of 1.5 mm. To the impeller by three M4 screws is attached to textolite roller on the bearing. The axis of the roller mounted on the bracket of 2 mm steel strip attached to the stud magneto. The device has another of the same movie (both are from cable drive one of the mechanisms of the control plane) is directing, and he also serves as a damper belt — drive rubber strap. As the rubber belt used o-ring cylinder liner of engine D-240 MTZ-80. 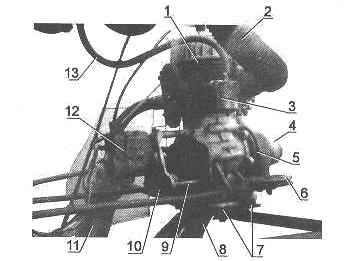 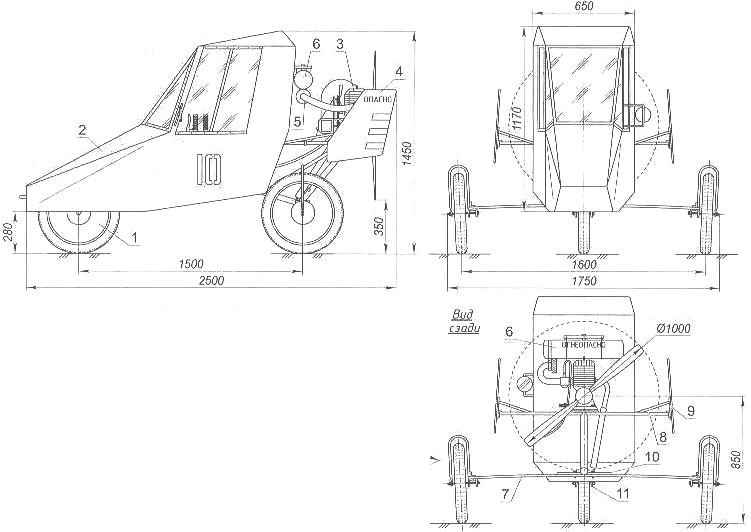 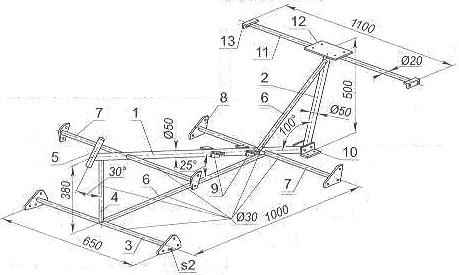 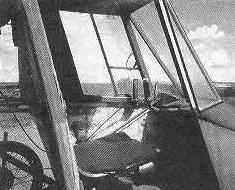 front seat “horned” handlebars with the brake lever of the front wheel, and then, side -grip throttle; front panel toggle switch off, ground the magneto to stop the engine 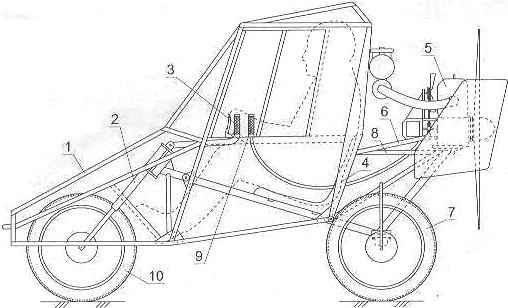 The layout of the aircar and the frame elements of the cabin: 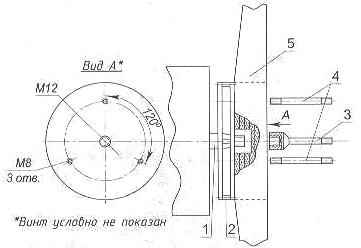 The scheme of mounting the propeller to the engine flywheel: 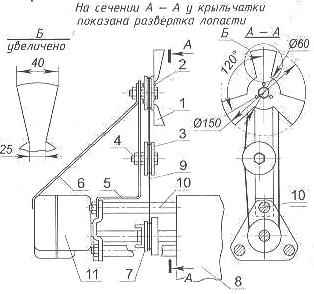 Diagram of the device forced air cooling of the engine:

Mover of the machine— propeller

The rotation of the impeller is carried by a drive shaft of the magneto connected to the crankshaft of the engine. On the magneto shaft flange machined semicircular groove-stream under the belt.

The muffler for the engine adapted from a motorcycle “Kovrovets” (from “Sunrise”). Carburetor K-36 01 too this bike and the air cleaner usaeven upstairs behind the cab under the fuel tank and connected to carburate rum a corrugated hose, taken from the VAS deferens of the grain drill. The tank is made of housing foam extinguisher. He attached clamps to the angled brackets on the upper rear crosspiece of the frame of the cab.

The propeller of a homemade, two-bladed with a diameter of 1 m. it is Made of birch bar, without special calculations, as described in the journal “modelist-Konstruktor”. As a result, the screw was a bit “stageline” aerodynamically, and the aircar when overclocking there is not much playfulness, but in “cruising” speed propeller installation has shown good traction In our area meet although not very steep but long ascents, but their speed with a car easily. After fabrication the screw is being balanced, impregnated with hot linseed oil, was primed with red lead and coated in two layers parquet varnish.

The screw is attached directly to the flywheel with four M8 studs. The Central pin special.made as one piece with the nut M8 its on the crankshaft of the engine is the flywheel

Suspension aeromotor — tricycle. Two rear support wheels and one front driven. The control is performed from the “horned” steering. Wheels and telescopic front shock-absorbing fork used from a moped “Riga”.

Rear axle beam, as mentioned above, made from the indigenous spring sheet. He cut off the rounded ends, and in their place welded on top of angle brackets, and — fork-ring made of steel tubes of an external diameter of 20 mm. Here the bottom is welded U-shaped brackets with the holes in the shelves for the axis of the tube. Axle bolts M12 length 200 mm. the Other ends of the bolts, the axes are based on the exterior feathers fork handles. Between the wheel and the feathers on each side on the axle wearing the spacer. The beam is attached to the frame with two M8 ladders. For more elasticity here at the root of the spring leaves are additionally imposed another length of 500 mm.

Cabin aeromotor homemade. Its frame is drawn from pine slats with a cross-section 25×20 mm. at the Bottom of the strut frame bolted to the M6 plate bracket frame. Pop the cab and hood (fixed) is made of 3-mm plywood, and the remaining part covered with a waterproof material such as oilcloth for the fabric base. Glass – celluloid 2 mm thickness. The door to the cockpit one on the right side, closes the window latches. The right sliding window.

Control mechanisms aeromotors while similar to a motorcycle, yet quite peculiar, but simple, and in fact their easy to learn and it’s very addictive. So. steering wheel — “one-horned”, as in the plane, it has a lever brake on the front wheel. Brakes-rear wheels — filed foot, like a car. Throttle control of the carburettor (“gas”) is made as of the motorcycle, the turn of a knob attached to the bar frame left-side wall of the cab. On the front panel in the cockpit only one switch — off weight of magneto to stop the engine.

The aircar made in the late 1980-ies. Since nor exploit it every season since the mid-vesn,I to mid-autumn. Despite the relatively long period of operation, it is not broke, and break especially nothing – the car is very simple.