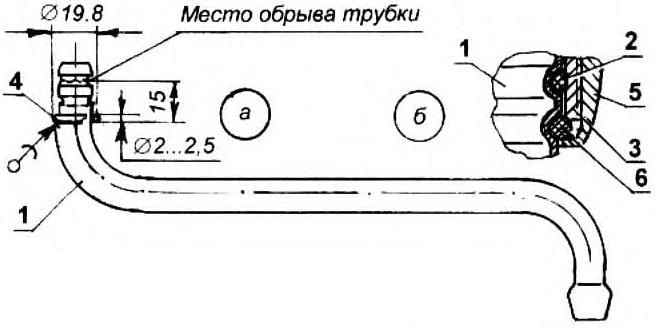 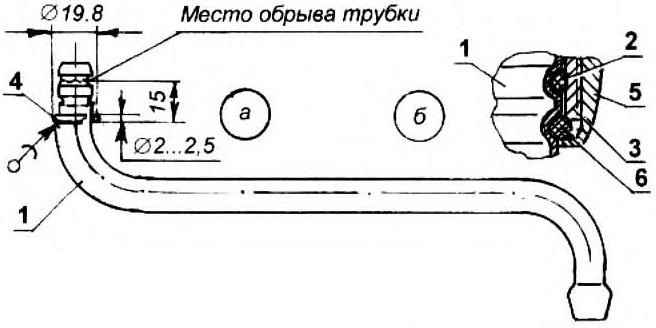 In domestic faucets-bathtub faucets have a swivel pipe (“goose”) as a used seal rubber ring. Over time, it is embedded abrasive particles contained in the polluted water, and at every turn the “goose” gradually grind off the walls of the grooves, weakened by the hood when expanding. As a result, the tube begins to “become loose” mounting of the mixer and the water leak. Further use of the tube breaks at the annular groove under the ring and requires replacement. But do not rush to throw it away. If you wish, you can extend its service life and even to improve the operational properties of tap mixer by changing the method of compaction and the water supply to the bathtub and sink. It is enough to perform a number of simple maintenance operations.

To improve the reliability and seals prevent increased wear at the corners of the tube it is first necessary to replace the o-ring seal end. For this to the tube below the recess under the locking ring, which is further not used, is soldered a ring of copper wire, performing in a new seal design the role of the thrust collar.

To improve the quality of the soldering on the tube at the place of installation of the ring with a thread file or a round file runs shallow (up to 0.5 mm) groove. The wire ring is crimped on the tube and after pre-heating over a gas stove is soldered using soldering acid.

Then at the end of the mounting tube of the faucet-mixer with a fine file and fine abrasive sandpaper trimmed end thrust area A.

When installing the tube on the mixer using the cap nut rubber sealing ring is clamped between the prepared end of the nozzle of the faucet-mixer and the thrust collar.

To prevent spontaneous loosening the nut when the elastic displacement of the rotary tube, it is delayed until it stops — before the end of the thread on the nozzle mixer.

If this is to rotate the tube will require great effort, it is necessary to increase the clearance under the seal ring, shortening the delivery pipe mixer undercut end face A. 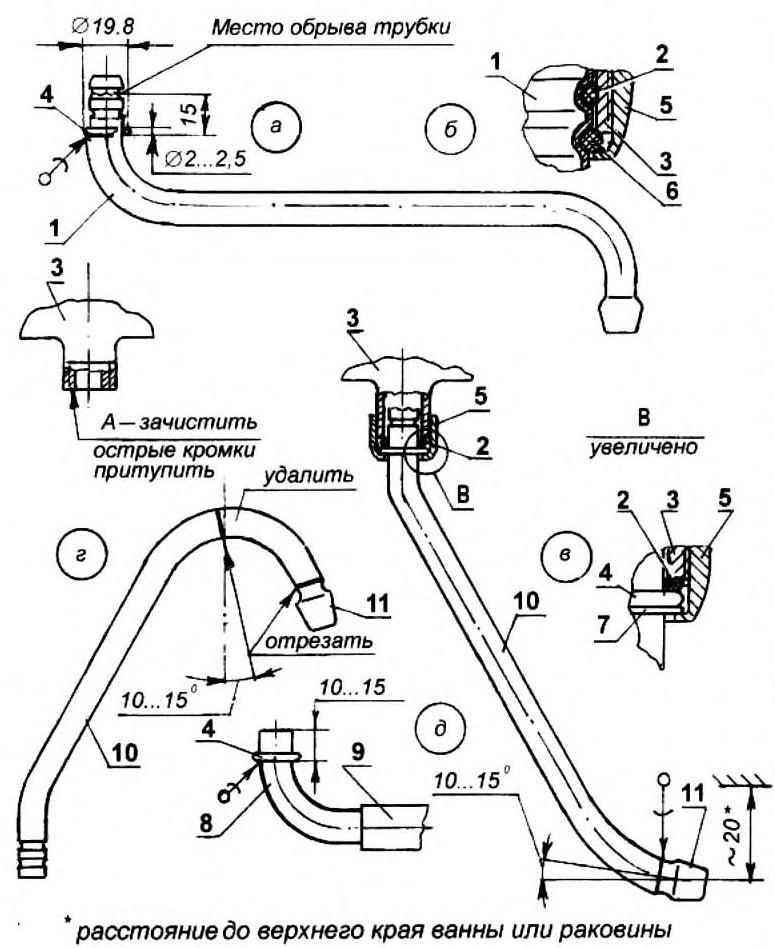 If, on the contrary, the gap is too large, the tube is “loose” and the connection is leaking, then the hard shoulder should enclose the adjusting rubber washer of appropriate thickness, reducing the gap and providing optimal elastic clamping o-rings.

Practice has shown that mechanical seal more reliably and accurately compared to a ring: eliminates breakage of parts, practically does not depend on the degree of wear of the friction surfaces, and occurs over time, the leakage of the junction is easily eliminated by replacing the rubber rings and (or) thrust washers.

This design can be used when connecting the tap-mixer with additional water devices, where in place of the seal there is a total pressure of the pipeline. For example, when connecting the valve with the heat exchanger for heating water that is installed over the gas stove, or for the analysis of water far removed from the mixer. In this case the mixer is installed a short period a failed rotary tube with the proposed design of the mechanical seal.

And I would like to draw attention to a failed, from my point of view, the shape of the tube of the spout (Fig. 1A). In this embodiment (when a vertical direction of the jet) area of water flow is limited by the radius of the tube. Besides its increased weight, bulkiness and frequent moves contribute (as mentioned above) wear of the seal elements and the reduced lifetime.

Alternatively I suggest to use the rotary tube with the horizontal water flow to the bathtub and sink.

In this case, the radius of the tube and its mass is reduced, and the functionality of the mixer will expand due to the adjustment of water flow by changing the pressure.

For the manufacture of horizontal rotary tube can be used from vertical kitchen faucet-mixer. For this purpose it follows to remove a rounded part (Fig.1 C, d) and solder the tip and then upside down to install in the outlet of a mixer.

To keep the water at full pressure from leaking behind the tub, the tip should be angled down at 10 to 15° and be placed below the edges 10 — 20 mm.