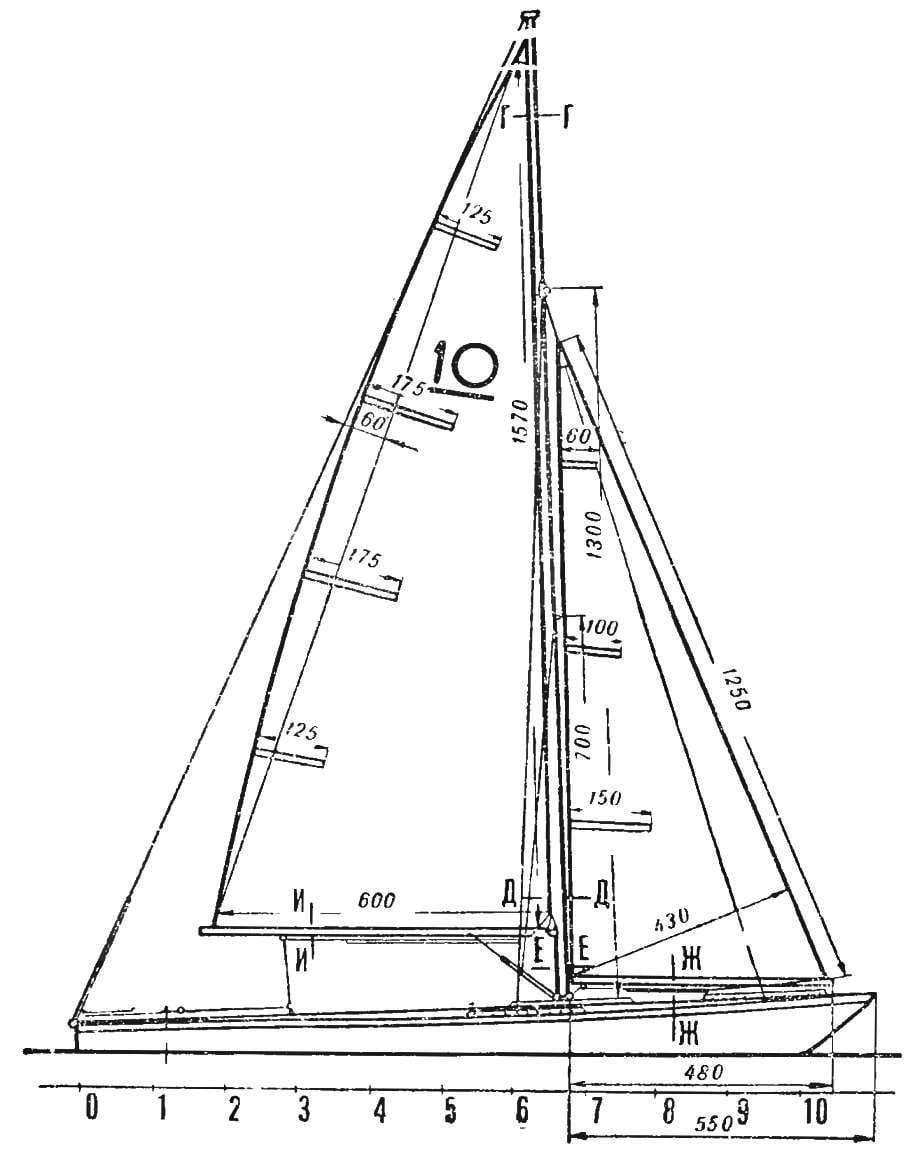 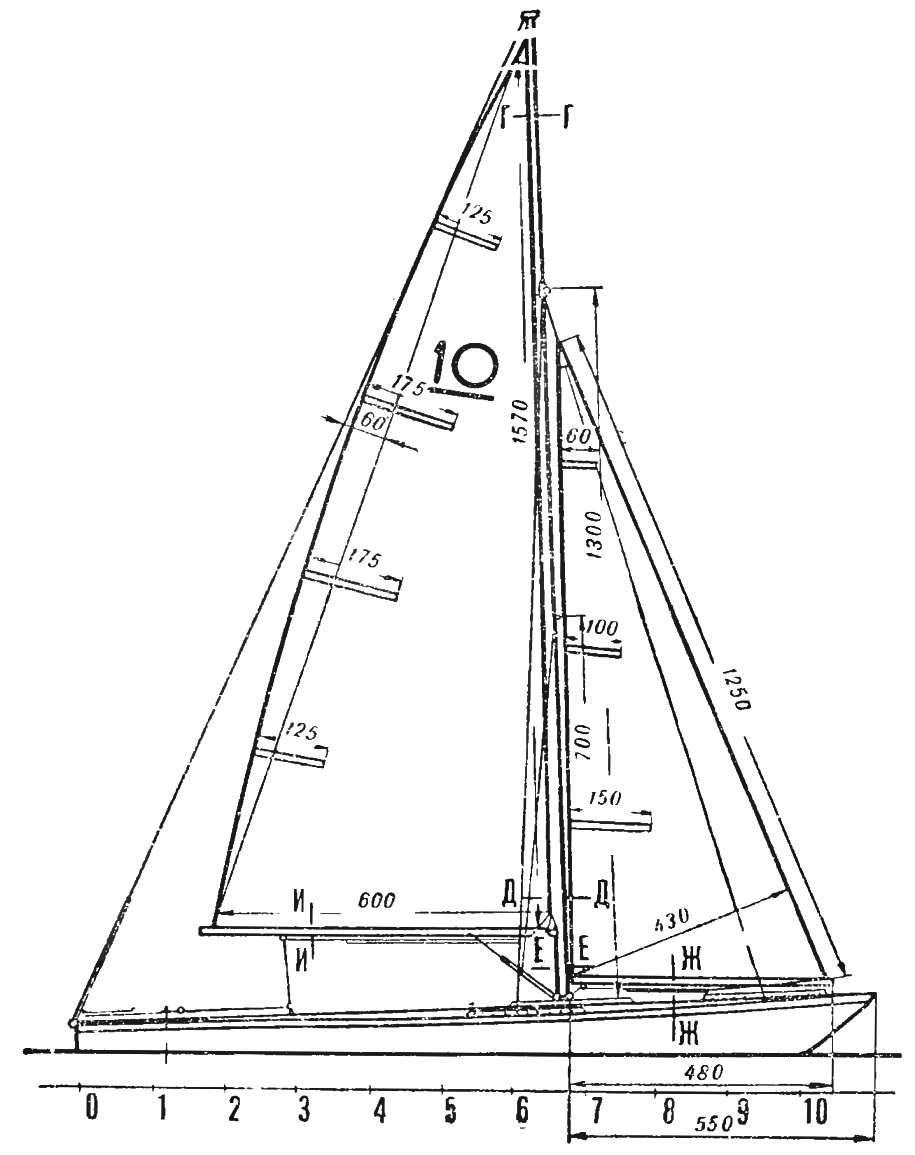 MODEL YACHTS “10” is very popular with modelers-boaters. It is easy, manageable and fast. The casing can be made of plastic or stacked with a shell of mm plywood.
In the first case, the drawing of dry basswood, alder or pine made wooden disc and templates frames, which should be numbered to avoid confusion. On the disc cause lines DP and frames. Then the disc is treated as long as the template touches all his points with its surface. Remove superfluous wood between the frames and cleaned the disc with sandpaper, then RUB with paste wax or paraffin diluted with kerosene.
Taping of the body fiberglass is done using epoxy resin ED-5 and ED-6, which add utverditeli — dibutilftalat (10%) or polyethylene polyamine (15%). Fiberglass bonded in the 4 — 5 layers — first the body, second side, etc. you Need to remember that resin is toxic, so work in a well ventilated area.
After complete hardening of the resin — 12-14 hours later — the case of the model process files spaceway of the water (dust from resin harmful effect on the organs of dehaine). After cutting the remnants of the fiberglass, the hull putty, and then sanded with sandpaper and painted — surface Board in white color, underwater in a red or green separated previously the waterline. Glued wooden transom, keel frame and lay the deck. To the deck at the nose Midel’veys screws attach the forestay-potens. His hole is attached galbavy the angle of the headsail. Changing the attachment point of the tack, you can move the center of the sail model. In the rear reinforced frames put the ducks to gigaslot. The mast can be made of aluminum tubing. Boom with fittings mounted to the mast on a swivel. The mast, boom and gaff rig need to varnish or paint. Putting on the spurs mast and the gaff rig, it is put in place, attach the spurs to the steps pin, place the forestay, shrouds and aftersteg that connect with potensi with lanyards. 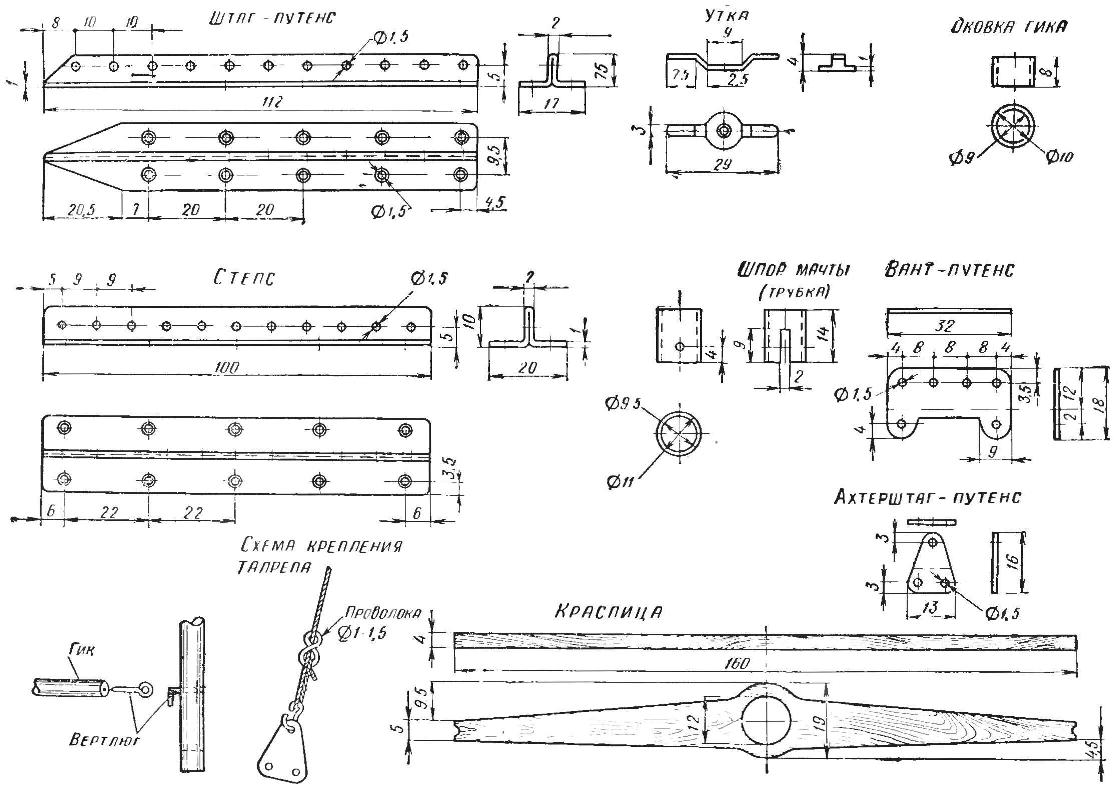 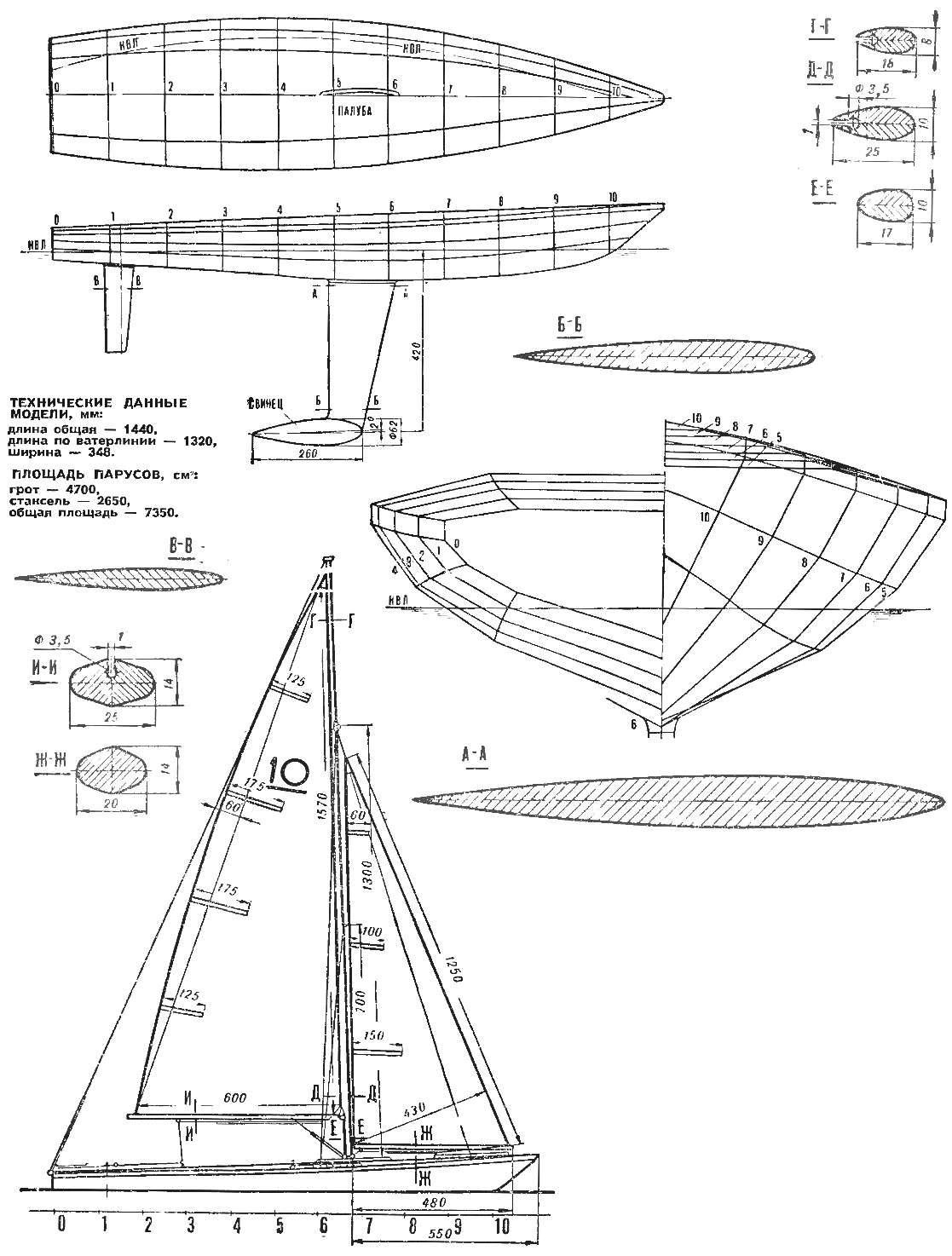 The sail model you can make of nylon, silk, bleached calico. Recently used and a polyethylene film. The technology of making sails is as follows. Pattern, analysis pattern, which is superimposed on the sail material (nylon, silk, calico) so that the rear part would correspond to the “direction” of the fabric Then cut out the sail With a margin around the perimeter of 6 -7 mm. Stock podymaetsja and pokupaetsya on the sewing machine. To katarinam of fishing line thickness 1,5 mm thread sew litres. The corners of the sail on both sides sew NLI glued triangles of fabric — booty pre-laying in the top corner of the FAL, in galbavy angle tacks and sheet — sheets. Galbavy the angle of the headsail attached to the forestay-putansu, and the jib halyard to the mast.
The descending model for water, ghica-sheet pre-attached for a duck, and the jib sheet passed through vant-potens. On top of the mast is attached to the pennant. The sheets need to impose the brand, which will serve as marks when setting sails. The latter is important: if the sails are well adjusted with different wind directions and speeds, it will provide a model of success in the competition.
For the manufacture of keel ballast made of wood vystrugivajut by drawing the two halves of the pattern. Them coated with grease and placed in a soft cast. When it hardens, the template is removed and formed thus a form of lead is poured. Both parts of the treated ballast, drill holes in them and screws fixed to the keel.
M. MIKHAILOV