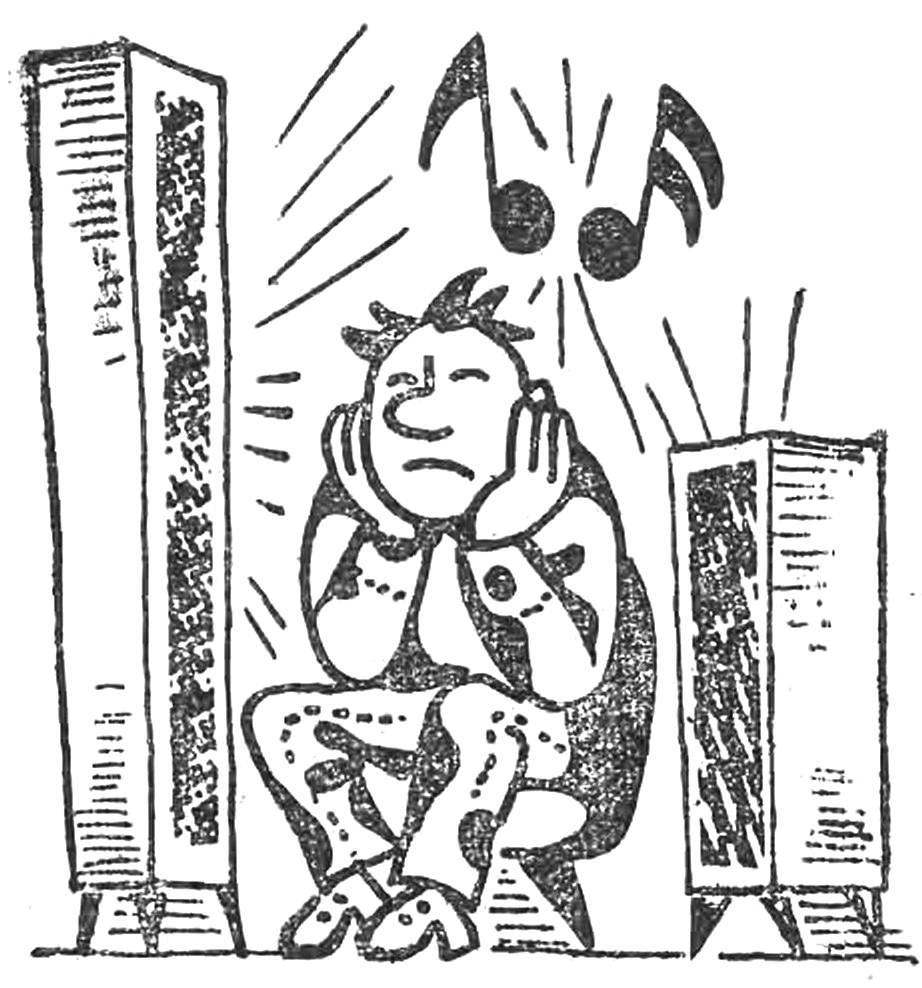 And so, becoming finally the owner of a high quality amplifier (see “M-K” № 7, 8 in 1975), you’d decide: “is now the Case for small: not enough speakers only sound”. Not shelving them, you go to the nearest radio shack, and found there a large variety of audio products, happen to be in a quandary. And what actually to choose?
The best person to ask for a specialist — technical characteristics of the device. A lover sometimes they say little. And still try to figure out what should be the high-quality sound speakers.
Let’s start in order. Find out what the minimum bandwidth they reproduce. Experts say from 30 to 45 to 15 000-18 000 Hz. And the wider the range, the greater base of the column can be classified as high quality. But this is not enough. It is important to know and what is the unevenness of the frequency characteristics in the frequency range. Agree, it is unpleasant if any of the instruments of the orchestra loudly sounds implausible. It drowns out the other instruments, breaking the aesthetic perception of the sound picture. Or, on the contrary, you cannot hear sounds of certain instruments, such as violins, giving lightness and intimacy to the executable. This speaks to the uneven playing system of different frequencies. Musicians have limited the allowable flatness value ± 4 dB. This value is almost not felt even the discerning listeners.
Perfect speakers reproduce frequencies from 20 to 20 000 Hz unevenness at the edges of the range of ± 6 dB. Speakers with these characteristics are expensive, and the difference in sound quality between them and the columns with the strip 40-18 000 Hz ± 4 dB almost tenuous. Besides, the last usually 3-4 times less expensive than the first.
Another important characteristic of the speaker total harmonic distortion sound pressure. It is clear that in the evaluation of this characteristic no two opinions: the less distortion the better. But what is the acceptable limit? Not more than 3% in the entire frequency range. 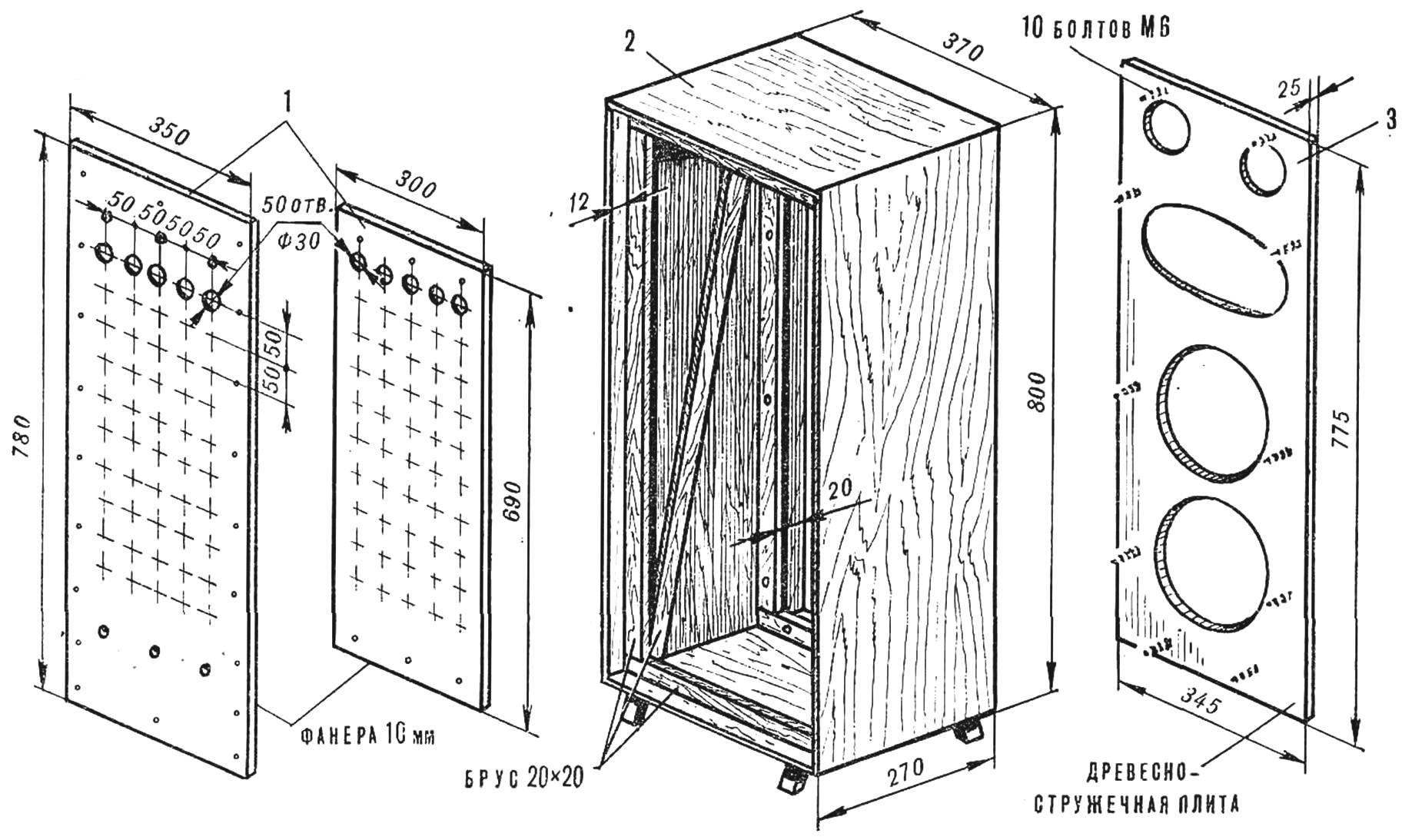 Fig. 1. Column design:
1 — rear wall with holes, 2 — body, 3 — front panel.
How many disputes erupted, when it comes to electrical power your speakers! How often among fans of the stereo you can hear the notes neglect to speakers low power. And how much dignity in the voice of the owners of forty-, fifty – or shestidesyatiletiya speakers!
Is there a reason for this? Yes and no. Because of the capabilities of the speakers are judged almost largest developed them sound pressure, or as they say, in volume. The latter, of course, depends on the input to the column of electrical power. But there is another figure, without which it is impossible to determine in advance what the speakers sound louder. This refers to the efficiency of the loudspeakers, or as they say now, heads. Watt column with a head with an efficiency equal to 15%, of course, will sound louder than dvadtsatiletnej column heads, the efficiency of which is equal to 5%.
Still, the preference should be given to columns of large capacity. They are safer, make less distortion and, most importantly, have a large dynamic range sounding natural.
What to answer those who ask: “Which speakers are better: chetyrehosnyj or osmeone?” If such a question was asked in the fifties, it would have caused confusion. In tube ULF power output to the load not dependent on resistance of the speakers (of course, if the output transformer taps are provided for connection of loads of various sizes).
Another thing transistor amps WOOFER. They have a power output depends on the load: the smaller the resistance, the higher output to the load capacity. Therefore, under other equal conditions, low-resistance speakers will develop greater sound pressure than the high resistance.
Exhausted is the settings of the speakers listed? No. But others are of secondary importance. For example, the ratio of the electrical power to volume or weight column, directivity, etc.
Many people worry about which speakers are better: acoustic or compression? Objectively the differences in sound quality between the speakers of both types no. It all depends on the conditions in which there is a listener. Acoustic design of compression columns has little effect on its frequency response. Head compression speakers have a large stroke of the cone, especially elastic suspension, low resonance frequency, large electric capacity and low efficiency. 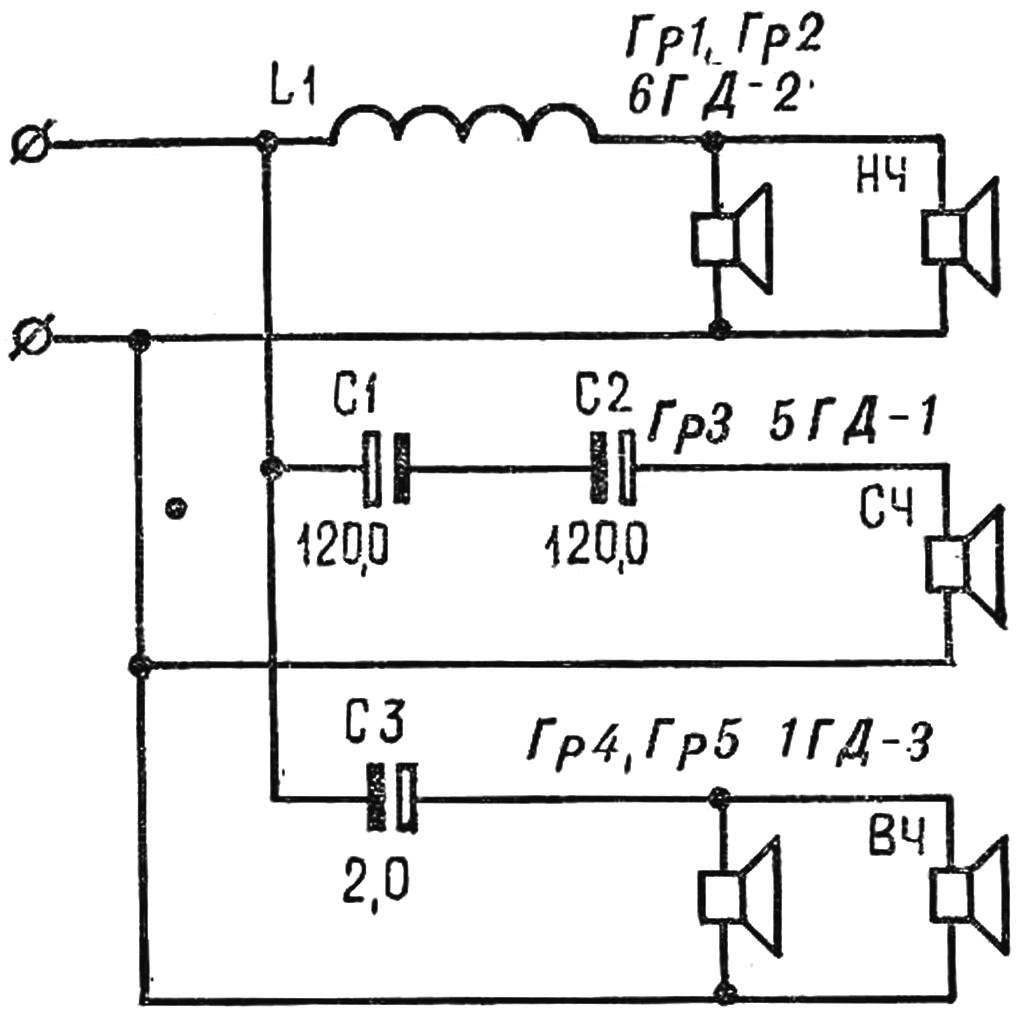 Fig. 2. Connection diagram speakers.
Along with such advantages, as simplicity of acoustic design (deaf five-wall box filled with a sound absorber), small weight and dimensions, compression systems have a clear disadvantage: the necessary sound pressure is provided by a large electric power. Acoustic speakers are large. And the design of their compression harder. But the requirement for the heads of such columns is moderate: the shortcomings of the speakers can be accounted for in the appropriate acoustics. The loudspeaker, like any musical instrument, requires careful set up and has its own, her trademark sound. Speakers these sound natural even at minimum volume levels, and sound compression becomes natural only levels close to the limit. The past is not always pleasant and possible.
A few words about the speaker placement. Some owners of stereo equipment put your speakers at random: one, for example, on the Cabinet, and the other in the opposite corner of the room, on the floor. No matter how high qualities they may possess played the audio in this case will be distorted beyond recognition.
Sometimes due to lack of space the speakers are next. Of course, the stereo effect to speak in this case not necessary.
For proper sound reproduction the speakers are equipped on the same level as the listener’s head and at the same remove from him. The distance between the columns — the database — must be at least two meters.
In this respect, the advantage of the compression of columns: they are smaller in size and easier to place in the room.
Offer now readers the design relatively simple acoustic speakers. They are easy to place in a room of medium size.
Each column has five heads: two low frequency type 6ГД-2 (resonance frequencies 30 and 40 Hz), one mid — 5ГД-1-RRS and two high — 1ГД-3-RS.
The design of the column — figure 1. Midrange head is closed by a metal cap. The back wall is a panel of acoustic resistance (PAS), consisting of two sheets of plywood with a thickness of 8-10 mm. In them coaxially drilled 50 holes Ø 30 mm. Between the sheets laid on canvas. It should be carefully pull on one of the sheets, consolidated and lightly moisten with water. Then both of the sheet by means of screws fasten together.
The use of PAS allows shadenfreude low-frequency drivers, slightly reducing their impact on low frequencies.
Connection designed “spike” and carefully taped the side and top walls athanasouli valuable species of wood coated with nitrocellulose lacquer and polished.
Front panel columns made of chipboard thickness of 25 mm. Before fitting them with decorative cloth around the perimeter, make 10 holes, in which “wpoty” insert 10 of the M6 bolts. With their help panel attached to the front part of the section: the bolt Head is filled with epoxy resin. The bases of the columns privernuty four legs with a height of 150 mm. Electrical wiring connection of the speakers in figure 2.
PARAMETERS COLUMNS:
Audio frequency response (non-uniformity of±4 dB), Hz…..40-18000
Electric power, W………………………………………………………….20
DC resistance, Ohm…………………………………………….3
Weight kg…………………………………………………………………………………………..15
Dimensions mm…………………………………………………………………………………809Х370Х270
Yuri KRASOV, engineer