The proposed model has a classic pattern glider A-2 “Hawk” in a reduced form. The main material for its construction – balsa. I must admit that over the last three or four years, such constructions appear frequently in competitions of any scale (though the schoolchildren they are made of more affordable material – to-ceiling foam). A return to this scheme due to the stability of the flight of such a rocket plane. Except only on the runway (starting) station.

The wing is elliptical in plan, with a span of about 360 mm and a maximum width of 82 mm made of balsa plate with a thickness of 4 mm. It is cut in half and stacked together. Paper cut out template one console, impose on the balsa blanks and handle the package on the circuit. Then dismantled and re-profiled, while simultaneously reducing the thickness of each console to the narrow edge to 2 mm. Then the end of the console work part time at a small angle (approximately 10 degrees) and glued together. The angle V should be between 175 -180 degrees.

Rake-the fuselage – made of pine, with the largest cross-section 4×7,5 mm and a length of 385 mm. To the rear of the section is reduced to 3×5 mm. from the Top, at a distance of 55 mm from the edge to the fuselage, glue the wing, pre-treating the lower part of the formed angle of the wing. The tail unit is cut from the balsa plate with a thickness of 1.5 -1.7 mm, slightly round off the edges on the contour and glue to the bottom of the fuselage. Stabilizer – length 183 mm from the trailing edge of the wing. Keel-length 225 mm – almost from the middle of the wing. This design provides the rigidity of the rear fuselage with a relatively small mass. 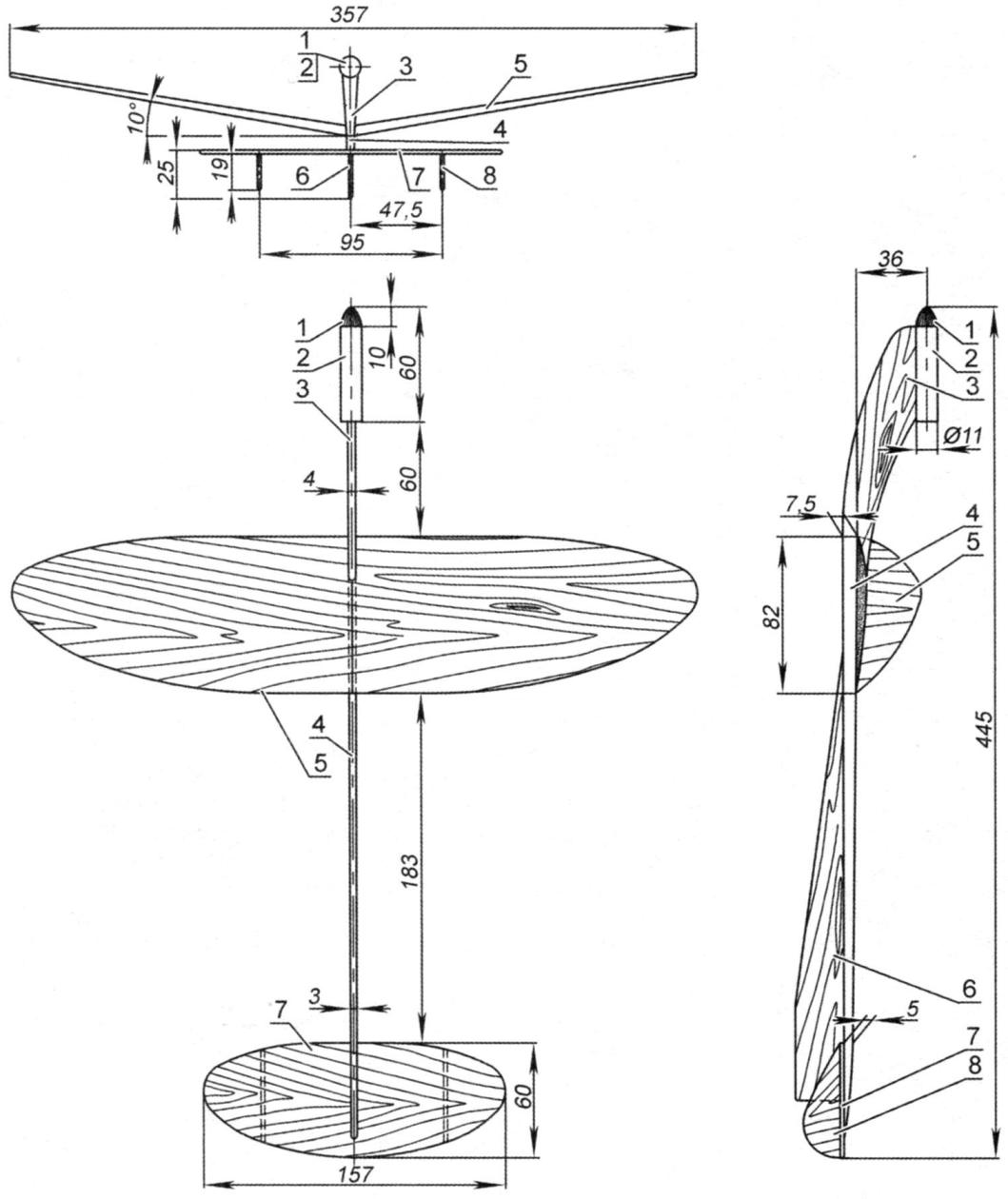 Model rocket modeling class S4A:
1 – fairing; 2 – container mrad; 3 – pole; 4 – rack-fuselage; 5 console wing; 6 – keel; 7 – stabilizer; 8 – dorsal fin
It should be noted that in the process of fine-tuning and adjustments had to add two forces small area. This allowed to significantly increase the directional stability of the model rocket plane during takeoff with a running mrad. In planning the flight is not affected due to speed difference.
In the bow of the rod of the fuselage glued the pylon is made of balsa plate maximum thickness 5 mm (with an oblique arrangement of fibers) and a width of 30 mm. At the top of the container is attached MRD, glued paper in two layers. Its length is 50 mm. In front of the container affixed to fairing, made from basswood.
When assembling and gluing all the elements of the model rocket plane it is necessary to consider that a slight taper of the rod of the fuselage to withstand the necessary installation angle of the wing, despite the fact that it is attached at the top and stabilizer on the bottom. Center of gravity model (with exhaust MRD) needs to be in the middle of the chord of the wing (41 mm from the front edge).
The finished model is double-coated with nitrocellulose lacquer. The mass of the rocket is about 25 grams.
V. ROZHKOV