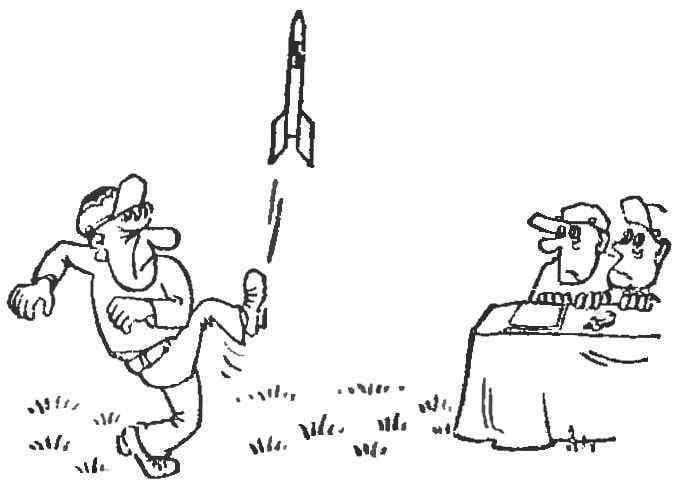 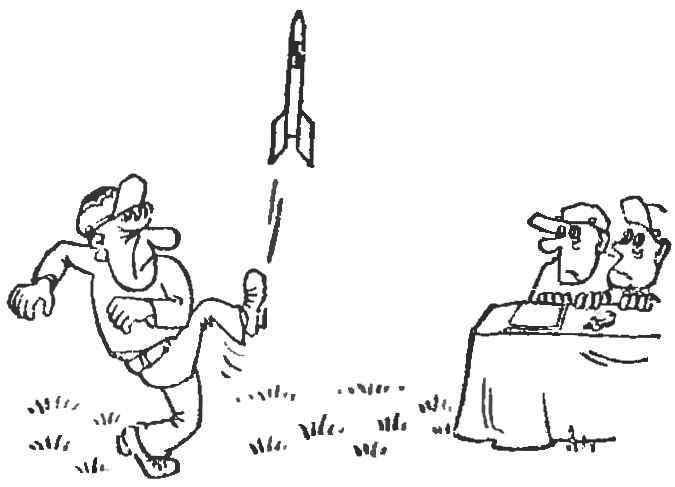 The competition rules for models raketoplana prohibit use for take-off surface, creating aerodynamic lift. Flight model can be scored if, at the time the hoist is used only reactive SIPA engine.
The proposed model of the rocket with total impulse of the engine to 10 n X h was designed, manufactured and tested in the circle space modeling syut city Elektrostal Sergey Morozov.
Ka testing the model showed that it has a stable takeoff with the engine running (in active phase), as in take-off position like a normal model rocket.
The wing is rectangular I plan consists of a center section and consoles, made of balsa. Profile convexo-concave; the greatest thickness is 3.5 mm. the Console hinge (nylon cloth) attached to the center section in the open position of the return rubber bands. Center section with two guides (one from allied wire Ø 1 mm, the other of tin of thickness 0.5 mm, rectangular shape, see figure) is moved along the fuselage. Rails with hooks for rubber bands glued into the center section with epoxy resin ED-5.
For takeoff the wings are folded down, the center section and all the wing away from the fuselage to the stabilizer where in take-off position is held by the clamp of the wire OVS Ø 0.3 mm, is inserted into the container for the engine. The locking mechanism releases the wing at the time of the shooting engine. 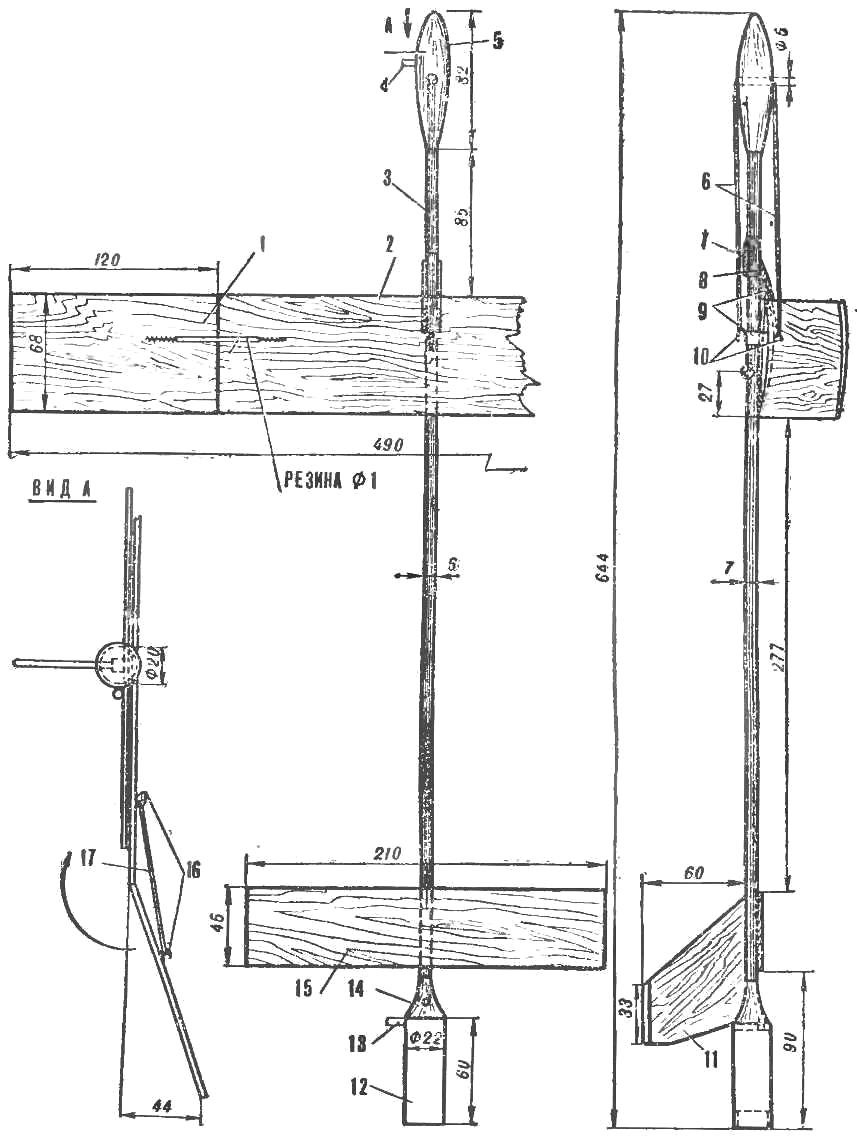 1 — console (balsa), 2 — wing (balsa), 3 — rack-fuselage (nipple), 4, 13 — guide rings (tin — 0.5 mm), 5 — nose cone (Linden), 6 — elastic return of the wings in the gliding position, 7 — damper limiter (pencil eraser), 8 — support wing (beech), 9 — guiding-wing (tin, OBC Ø 1 mm), 10 — hooks fastening the elastic return of the wing (OBC Ø 1 mm), 11 — the keel (balsa), 12 — container for the engine (paper), 14 — reducer sleeve (Linden), 15 — stabilizer (balsa), 16 — hook attachment bands return console (OMC, Ø 1 mm), a 17 — rubber band returns the console to the planning position.
The fuselage with the pine rail section 6X7 mm. In the bow glued the fairing of lime, which simultaneously serves as the load. The location of the center of gravity is changed by pressing fractions. In the rear part of the fuselage is a container for the engine, glued the two layers of drawing paper.
The stabilizer and fin — shaped plates of balsa wood with a thickness of 3 mm. the Return of the wing for gliding flight after separation of the engine is rubber bands that are fixed on the hooks of the center section and pass through the nose cone. In planning mode, the wing is held by the stop (wedge of beech) and the restrictor of a pencil eraser, mounted on the fuselage with glue BF-2.
The entire model is three times covered by Amalita. The weight of the model without motor — 60 g. the Center of gravity is located at a distance of 27 mm from the trailing edge of the wing.
V. ROZHKOV, master of sports of the USSR