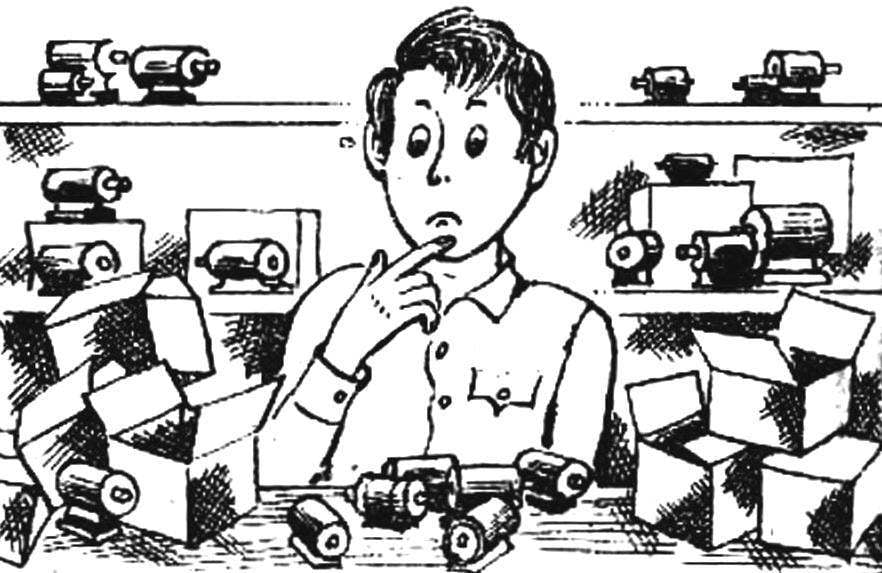 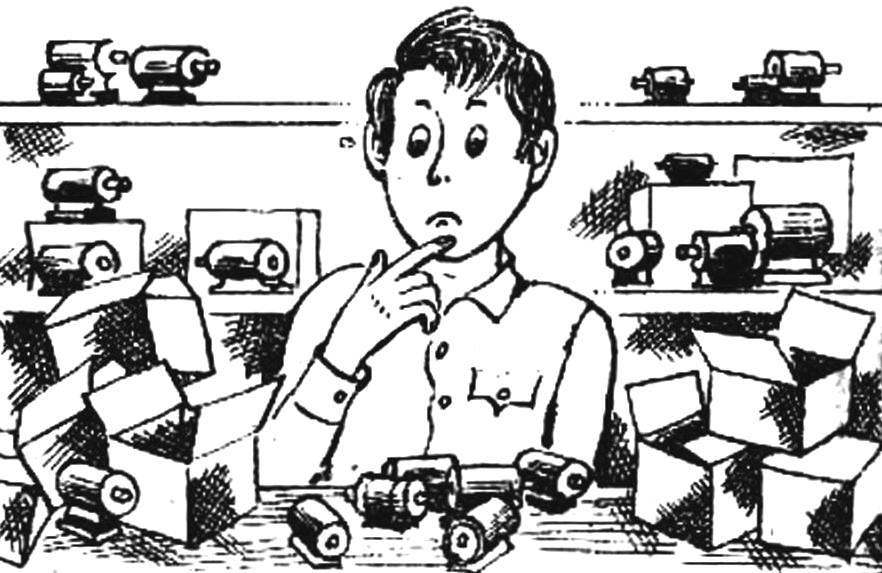 “Dear editors! I recently bought in shop “Children’s world” microelectronical, but when I put it on the model of the torpedo boats, it is a day out of order. Please advise, can it be repaired and how?
Yuri Sergeyev, Kiev”.
“…The quality of microelectrodes depend largely on future athletic performance of the model. Is it still at the store counter to determine the reliability of an engine, will not fail if it is during the critical start?
Alexei Zhdanov, the city of Semipalatinsk”.
Such letters are not uncommon in our post. Because latent defects microelectrodes sometimes hinder the work of the Modeler. So the editor asked the chief of the laboratory of microelectromechanical MLM “Horizons” V. KHITRUK with a request to advise our readers how to determine the efficiency of such engines, without leaving your shop counter.
Microelectronical, commercially-available, although different in appearance and operational parameters, have basically the same principle of the structural arrangement. This is a two-pole electrical machine DC excitation from an external magnet (magnets). Treasury laminated anchor drum is assembled from electrical steel plates. The copper coil of insulated wire connected in a “triangle” or “star”. Power — brush unit mounted in the engine cover, and reglamenting cylindrical manifold is pressed onto the armature shaft.
Modification of individual units and details of microelectromechanical quite diverse. In particular, the distinctive feature of the engines of TIR and DP is the use of magnets in the form of bars of rectangular cross section alloys cobalt-based magnetic cores are encased in a plastic body, and lids made of polystyrene, glued to the body. Typical representatives of motors in a metal casing are a series engines ДИ1, they use a segmented ferrite-barium magnets. Polystyrene caps are mounted in the housing of these engines crimping legs. These motors can be easily disassembled and collected without compromising the integrity of the cover or housing.
You know in advance what kind of engine will fit in your model? If the load is small, good engines of the brand DP, if the average (0,4 -0,5 W) — МДП1 or ДИ1-2, with a power of over 0.6 W — engines of the brand ДИ1-3.
Going to the store, take a flat 4,5 V battery. It is convenient because its terminals easy to connect any microelectronical.
Ask the seller for permission to select his engine to taste, however, connect the battery do not rush. First, inspect the engine externally, primarily drawing attention to the fixation of the cover. Whether it is tightly fixed, there are no distortions. Then check the condition of the contact brackets, move them with your fingers. If they loose, liftout, put this engine in his work time may be lost contact in setclockalarm node.
Then inspect the working part (neck) of the shaft. There are no bends, surface defects, rust, burrs. This is necessary to ensure reliable fastening of tube gear, pulley or other structural elements on the shaft.
Grasp the shaft with your fingers and gently slide it in the axial direction from one extreme position to the other. Axial play should be within 0.5 — 1 mm. Smaller backlash will cause friction losses between the end faces of the armature and the flanges of the bearings, especially if the grease thickens; and more — will lead to the offset of the packet’s anchor relative to the active zone of the magnetic field of the motor. In addition, much play on the shaft can cause a disruption in the communication between the handset and the gear of the first stage reducer models or toys.
Scroll down through the shaft in both directions. If it scrolls with the effort or coasting, put this engine — it is also faulty.
Now consider a variant — pre-inspection no defects were discovered: the cover is firmly seated on the bracket and contacts a fixed value, the axial play of the shaft at normal, the ends of his fine, and it rotates by hand freely in both directions without jamming. That was then, and it’s time to connect the battery. The engine has to work her vigorously. Change the polarity and listen n the motor. If the tone of the sound when you reverse (the reverse direction of rotation) are easily distinguishable by ear, it is not necessary to buy such an engine — it is assembled with a violation of the so-called geometrical Central and under load will not be able to develop the appropriate capacity.
Press finger n the lateral surface of the shaft of the engine. These lateral loads must not lead to a stop of rotation of the shaft. Change the polarity and repeat the procedure. If the shaft speed falls sharply with a small push, then the motor is faulty, its power and efficiency below the norm.
But since the engine broke down and the tests, listen to his work again carefully. The sound should be smooth, not jarring. The fingers covering his body, should not feel sharp vibrations. The contours of the shaft should be clear, not blurry. Otherwise, put the engine in the side — he can fail you because of the eccentricity of the armature and shaft runout.
So, all the excitement behind the engine you picked up. But do not rush to install it on the model. Put it vertically, apply one or two drops of liquid oil at the base of the shaft and spin it. Do the same with the other end of the shaft.