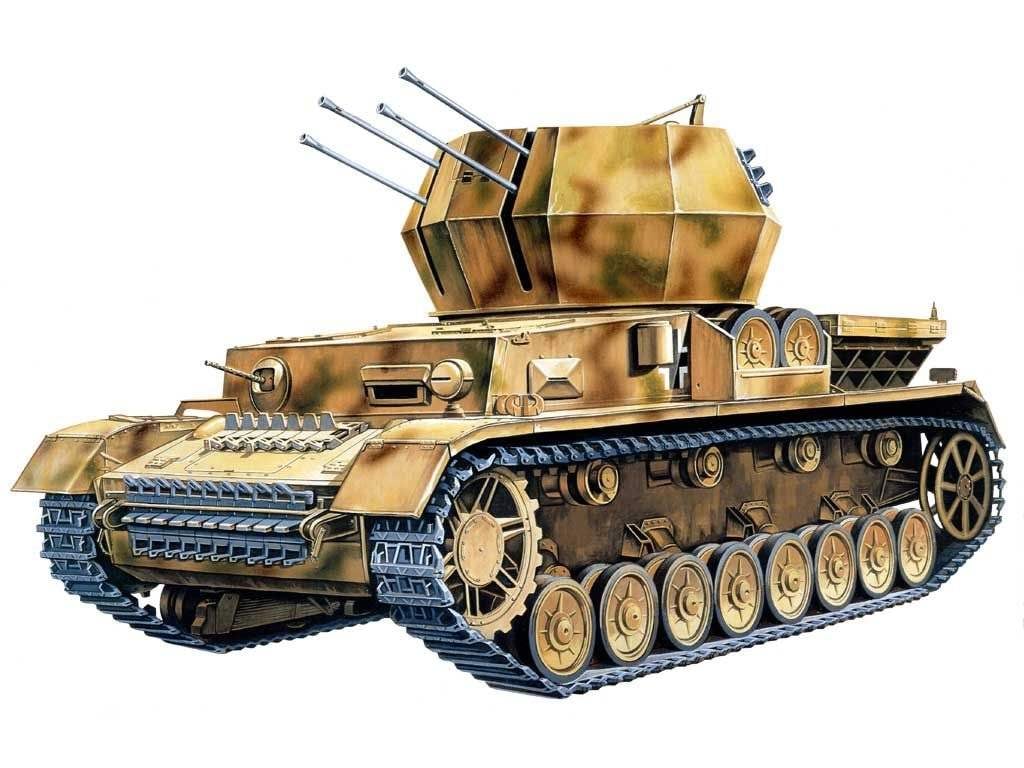 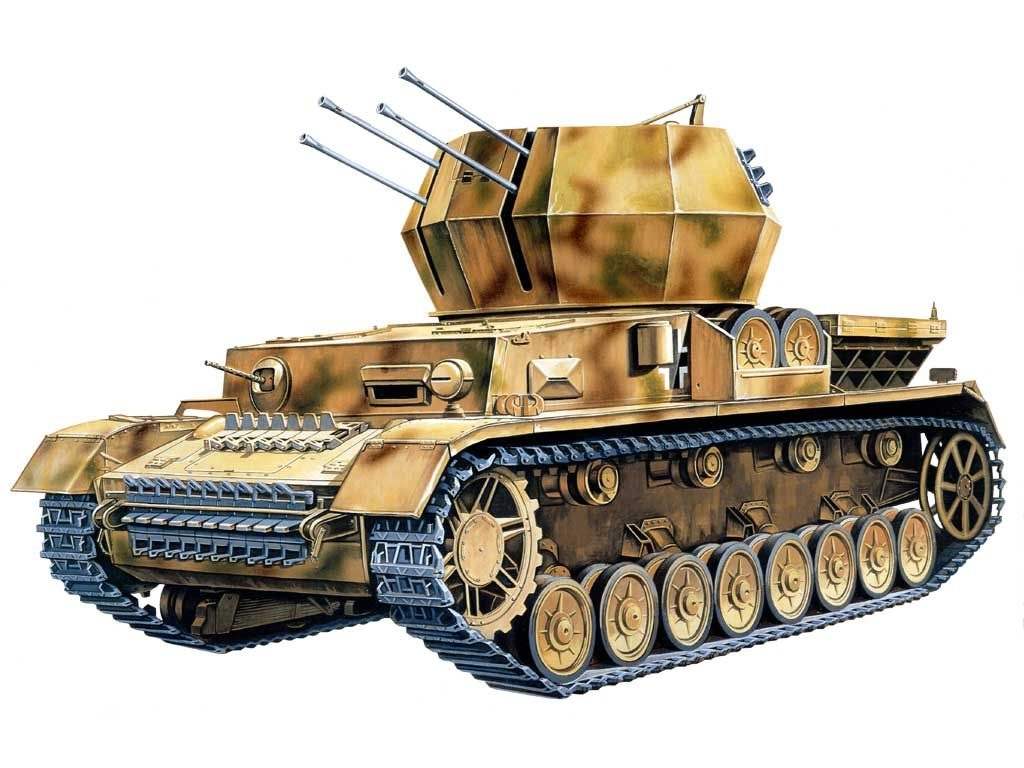 The rapid development of aviation during the period between the world wars led to the fact that the plane has been regarded as an effective tool of warfare. Already the experience of the civil war in Spain has clearly shown that the intelligent use of attack and bomber aircraft can radically change the course of the fighting in one way or the other. The second world war has confirmed it. Naturally, the most effective means of combating enemy aircraft was a private aircraft. However, to provide round the clock cover for ground troops, she was not. To cope with this task only anti-aircraft artillery.

The emergence of small-caliber rapid-fire artillery systems provide the possibility of combat aircraft at low altitudes, which was most dangerous for the army gunships and fighter-bombers. But towed anti-aircraft guns were only effective in the air defense system of the stationary rear and front objects, as well as protection from air strikes troops stationed in defense, with a stable front line. At the beginning of world war II air defense systems, capable to cover the infantry, armored and mechanized units on the March and in the attack, almost was not. However, the highly maneuverable nature of combat actions was forced to engage in their development.

One of the leaders in creating self-propelled air defense was Hitler’s Germany. During the war the Germans developed and launched into serial production at least a dozen anti-aircraft self-propelled guns (ZSU) on the basis of car, half-track tractors, armoured personnel carriers and tanks of various types.
In 1941 on the chassis of light tank Pz.lA was created by ZSU Flakpanzer I, armed with 20-mm automatic anti-aircraft gun Flak 38. Let them, however, little and armed with only one unit — 614-y motorized anti-aircraft division. Much more successful and the mass was the ZSU on the basis of a light tank Pz.38(t), using the same 20 mm gun Flak 38. From November 1943 to February 1944, the BMM factory in Prague produced a 141 machine of this type. ZSU Flakpanzer 38(t) proved its worth in battle. 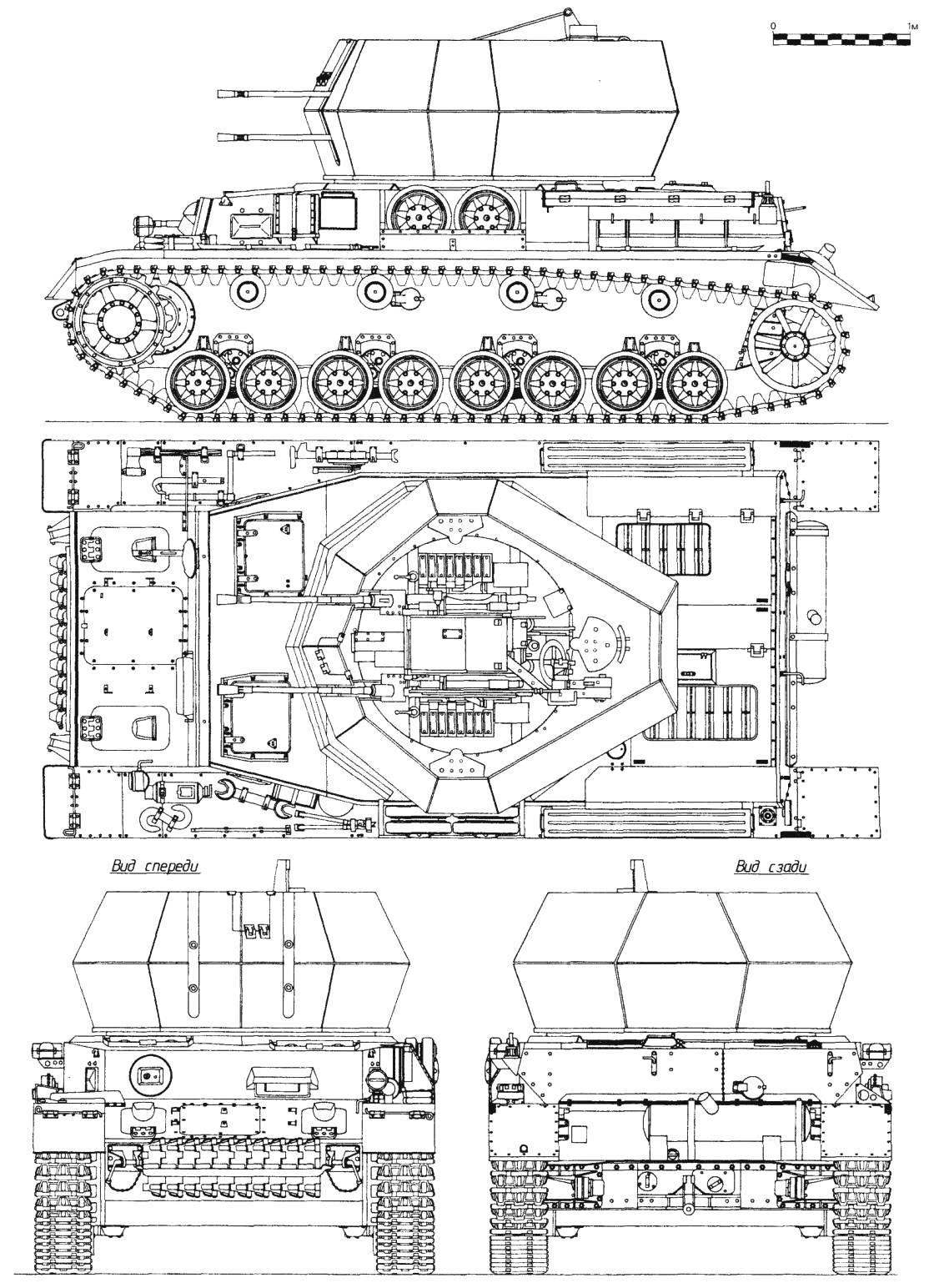 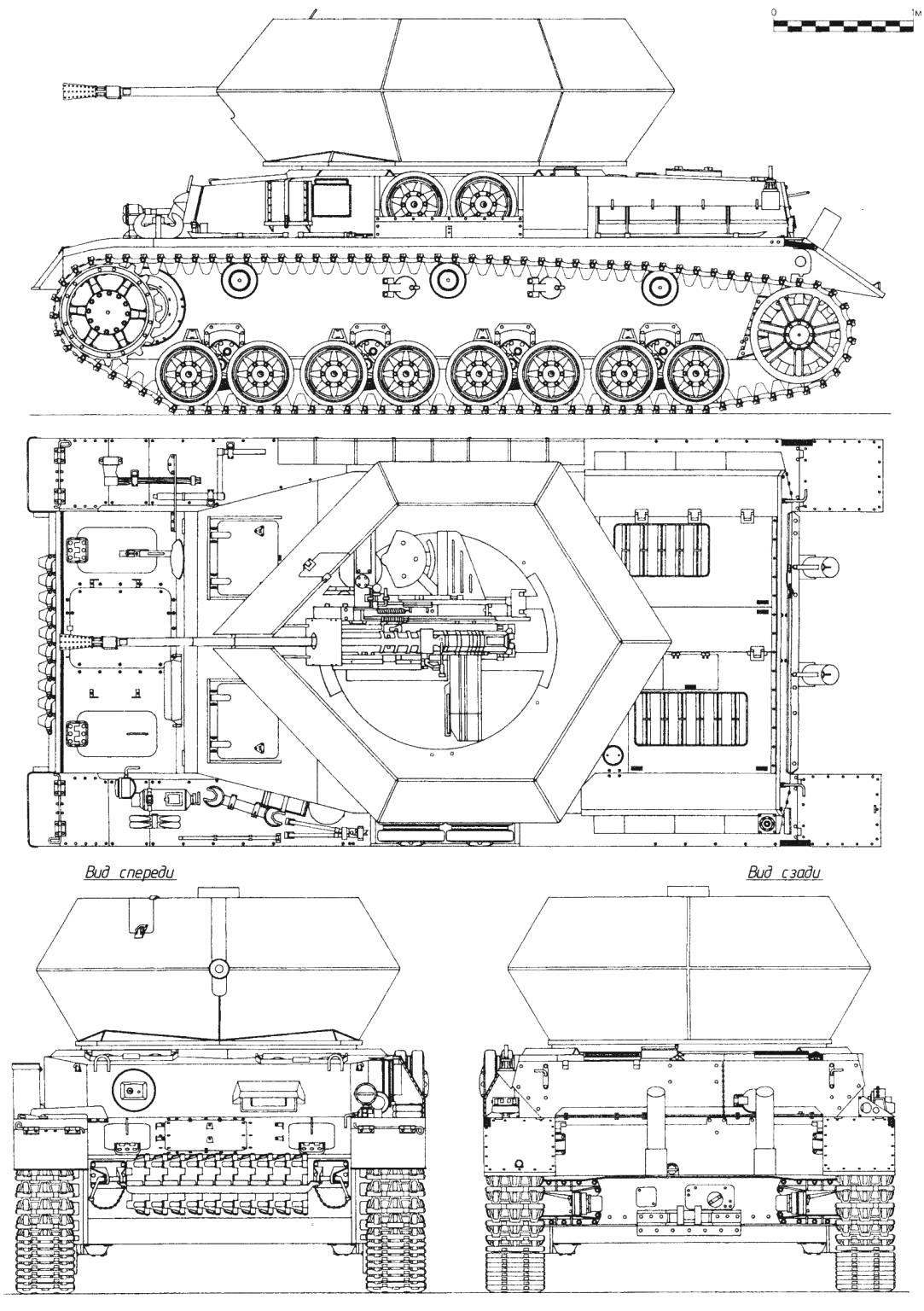 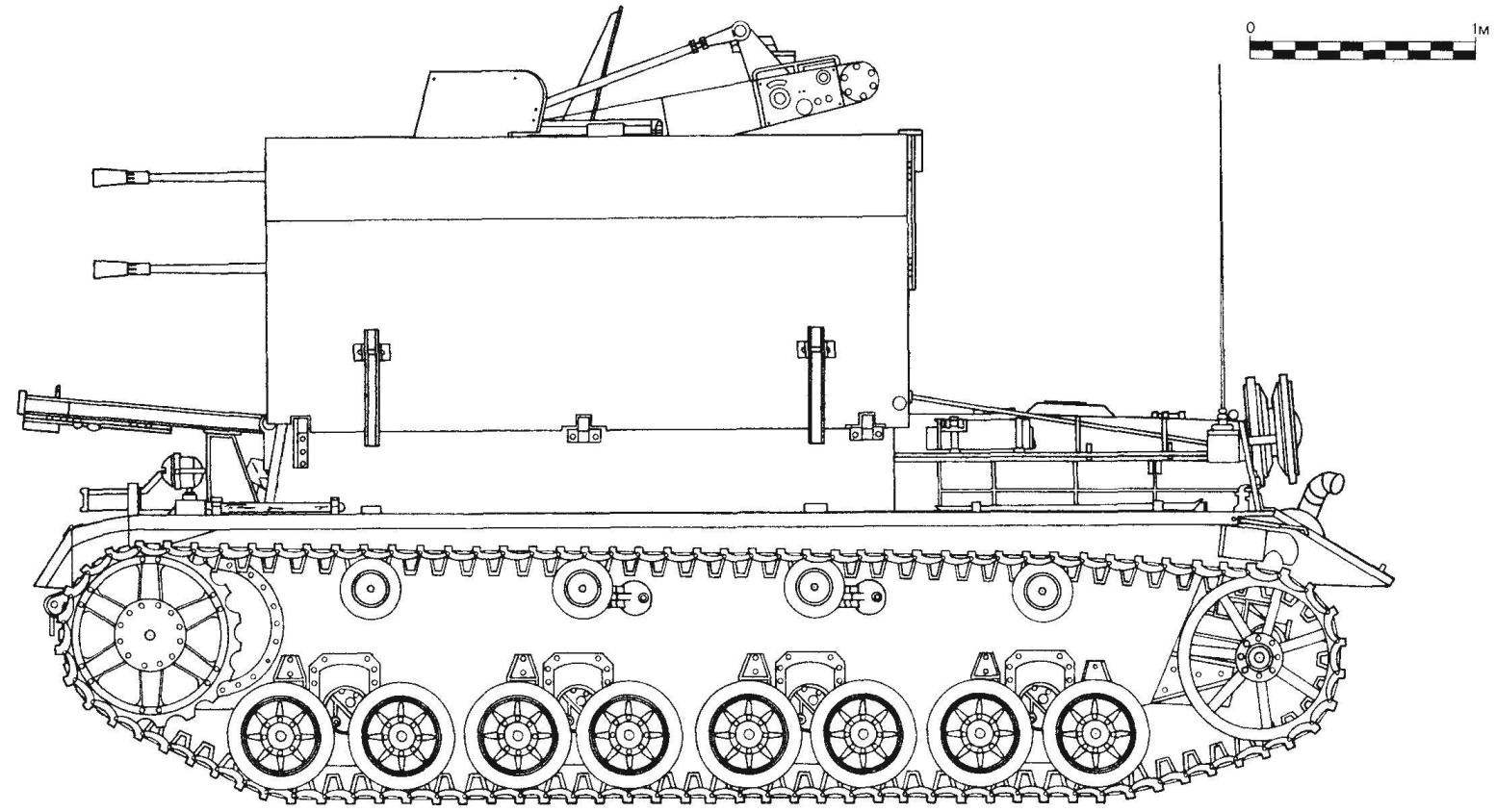 Mobelwagen
A common drawback of both machines was the armament, which consisted of a single-barreled gun, not capable of providing high rate of fire is required when firing at low-flying targets. To place the same multi-barrel artillery system on the chassis of a light tank was not possible. This problem was so serious, and the need for this ZSU is so sharp that the issue was discussed at the top. In December 1943, the meeting of Hitler with the Minister of armaments Speer discussed the progress of the führer’s orders, given in may of the same year, on the establishment of ZSU on the basis of a medium tank Pz.IV. At the end of the meeting, Hitler demonstrated a prototype of a 20 mm Quad-mounted ZSU on the chassis of tank Pz.IV. The artillery system was mounted on the roof of the hull. In the stowed position and the gun, and the calculation was protected with four sides hinged 12 mm armor plate walls. In battle these walls down in a horizontal position, delivering fire on 360° and allowing the calculation of five people without interference to service the instrument. Protection calculation in battle were only the regular gun shield. The führer has approved of the car. However, the series went ZSU, armed with 37-mm automatic anti-aircraft gun Flak 43. Firm Deutsche Eisenwerke AG in Duisburg produced 240 ZSU, received the troops nicknamed Möbelwagen (“furniture van”) is in the raised position of the folding walls formed a rectangular clumsy cutting. By the way, starting from the 46th machine, these walls were made from massive 25 mm armor plates. In folding the walls disappeared and the main drawback of this ZSU — she could not open fire immediately. This fact immediately pointed out in the army.
Experience of design and combat use of the ZSU allowed to specify performance requirements for this type of equipment. Finally they took shape in the form of a Memorandum filed may 29, 1944 the inspector-General of tank troops Colonel-General G. Guderian. So, the command is presented to the ZSU following requirements:
rotating, fully armoured tower with a crew of 3 — 4 people; effective range of fire of not less than 2000 m; armament — twin or Quad guns, supply of ammunition, sufficient for conducting independent combat actions for 1 — 2 days; machine height within 3 m; the mandatory fitting of radio.
However, these requirements soon made some very significant additions. So, because of the inability to provide acceptable ventilation of a fully armored turret of the ZSU and it was abandoned in favor of the tower, open at the top. The last was to have a simple design that allows you to use serial 20 – or 37-mm anti-aircraft gun field Assembly without the bottom of the machine and stroke and to provide guidance from -5° to +85° vertically.
The prototype “anti-aircraft tank” Wirbelwind (“Whirlwind”) produced at the plant Krupp-Druckenmuler in the suburbs of Berlin Tempelhof. Tower ZSU was made from 16-mm armor plates, the bottom had a thickness of 30 mm. Tower mounted on the pursuit of the regular turret of the Pz.IV with a diameter of 1640 mm. were In it jobs three crew members: gunner (aka commander) and two charging. The driver and radio operator were located in the tank hull, as well as in the Pz.IV. The total height “Wirbelwind” was equal to 2760 mm, the height of the tower is 1050 mm. the rotation of the tower could be carried out either manually, with a speed of 28° per second, or by using a hydraulic drive with a speed of 60° per second. A regular sight mounted in the turret of Quad-mounted 20-mm automatic anti-aircraft guns were allowed to fire both air and ground targets. Maximum ammunition consisted of 3200 shots (90 stores). Replacement barrels for 20 mm guns were transported in special containers fixed on both sides aft of the hull. 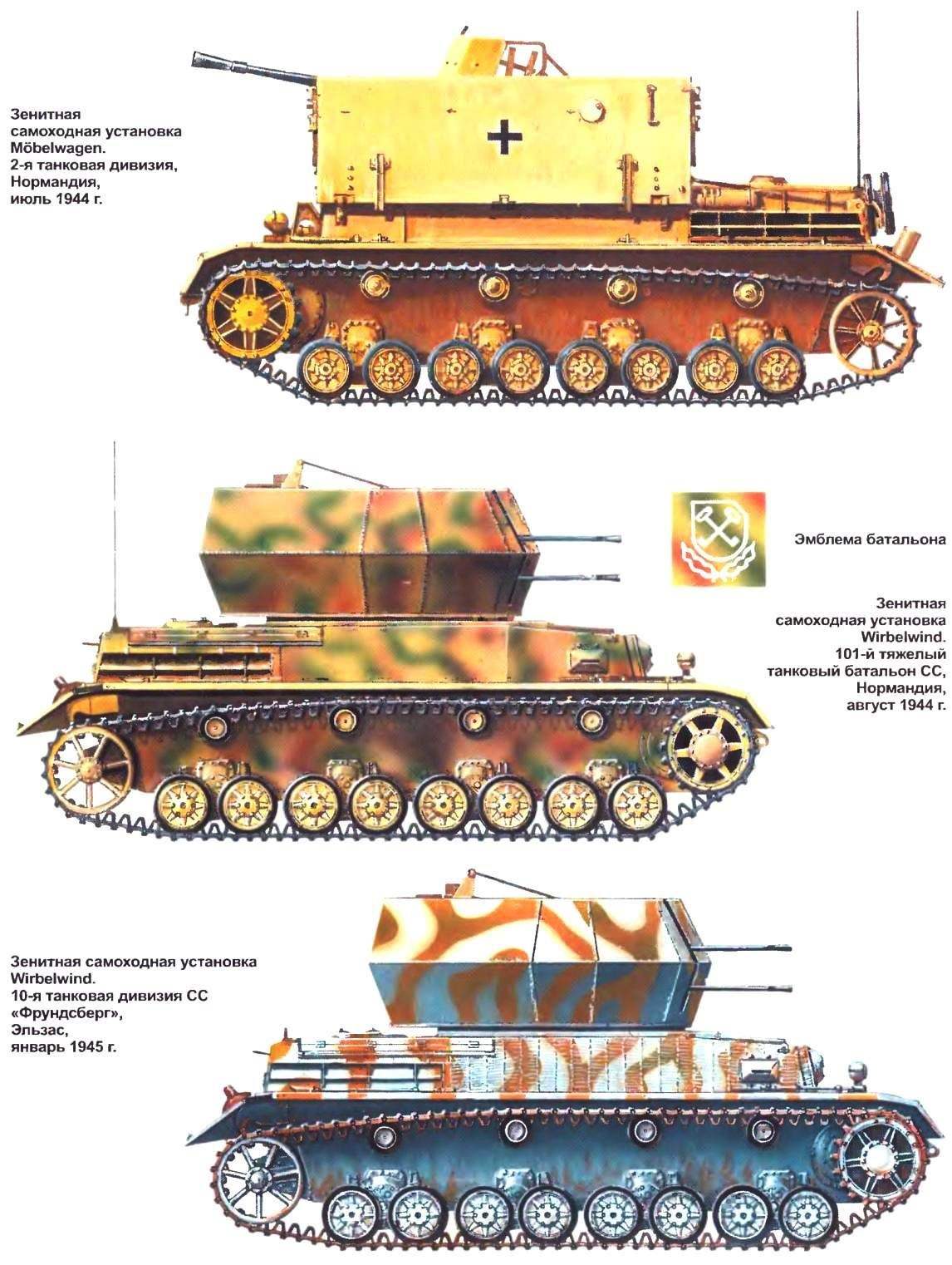 General Guderian had originally been allowed to convert in the ZSU “VIR-believing” only 50 tanks Pz.IV. For this purpose, in the town of Zagan in Slisane stationed there on the basis of 15-th reserve tank battalion was established a special company Ostbau-Sagan. To the work involved up to 80 soldiers and non-commissioned officers of the battalion. Managed the enterprise Lieutenant Fitzner. Direct was supervised by a talented young officer, Lieutenant count Hans Christoph von Scherr-Toss.
At the end of April 1944, the order for anti-aircraft tanks was increased. However, the real issue ZSU was determined by the number of tank chassis, have been reported for the conversion from Assembly lines of the company Krupp. In fact, in chassis, designed to “wirbelwind”, made only minor changes. Towers for they were welded at the factory Deutsche Rohrwerke AG and the metallurgical plant in Greenhouses-Schonau in the Sudetenland. The final Assembly of towers factory produced FAMO in Breslau (now Wroclaw). At the company Ostbau-Sagan, essentially representing a military workshop, carried out final Assembly of military vehicles. In July it was ready the first 17 “wirbelwind” that allowed to complete them and the first air defense units. Until the end of 1944 Ostbau-Sagan has collected 100 “wirbelwind”, and then was evacuated in Greenhouses-Schonau. Here in February of 1945 managed to produce only five machines of this type.
In the design of the ZSU “Wirbelwind” the decision was made to create a similar design as anti-aircraft tank, armed with 37-mm automatic gun Flak 43. Because of the greater mass of the cannon had to remake the tower. It consisted of only 12 sariasia to each other armor plates (“Wirbelwind” there were 16 of them) with a thickness of 25 mm and was larger in size. For its rotation had to develop a new swivel mechanism. The first tower of the new anti-aircraft tank, named Ostwincl (“East wind”) was made in June 1944. Assembly of production vehicles began in late November. How many were made “hostwindow” is not known. In his memoirs, count Von Scherr-Toss writes about 40 made machines. From the army statistics it is possible to gather information about the seven existing anti-aircraft tanks “Windstorm” as of March 1945. Judging by the lack of photos of production vehicles, the military is closest to the truth.
The performance characteristics of the German anti-aircraft tanks

Anti-aircraft tanks “Wirbelwind” and “Windstorm” can be considered the most sophisticated ZSU during the Second world war. Their design allowed the gun crew carry out effective monitoring of the airspace. High performance anti-aircraft guns, in turn, to ensure the conduct of effective defensive fire. Not by chance the German anti-aircraft tanks became the first target for fighter-bombers of the allies.
ZSU went into service in anti-aircraft platoons of tank and motorized divisions of the Wehrmacht and the Waffen SS and was used in combat until the end of the war. It is interesting to note that on 10 April 1945 remained in service 98 installations of all three above types. 83 of them, despite the more action the Anglo-American aviation, were on the Eastern front.
M. BARYATINSKY