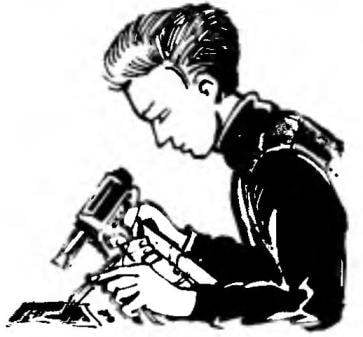 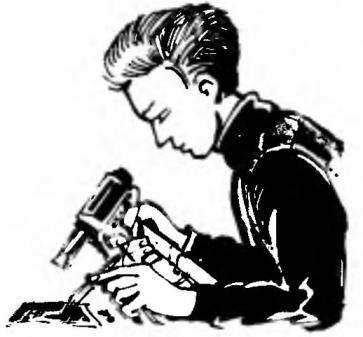 I recommend readers of the magazine is easy to count, easy to manufacture and very reliable electric soldering iron. At my house, for example, these range from “krohotulki” for work with microelectronics to powerful “ax” with which to patch a leaky metal tanks, repairing wells, filters and other large items. Moreover, the heating element of each electrical device is… the appropriate power resistor (type PE or PEV), powered by household outlet voltage is 220 V. the resistance, if they cannot be avoided, reactive, precise, capacitive, allowing to solve very complex electrical problem with the minimum dimensions of the devices.

As shown, for calculations in the manufacture of soldering with resistor heaters, it is sufficient to know Ohm’s law (I=U/R), the basic formula for power (P=IU) Yes tolerable to use four arithmetic operations.
Suppose that, having vitrified ПЭВ30 resistor with nominal value of 100 Ohms, you have decided on its basis to make a soldering iron from the mains voltage 220 V Referring to the above ratios, it is easy to determine the required data: current 2.2 A, power consumption: 484 watts. But…
Appearing in the name of the used resistor the 30-W parameter is power dissipation, which can PAUSO a long time (thousands of hours!) save, not appreciably Nicolaas, its own denomination. Mounted in the heater in the soldering iron (of course, with inserted copper core heat sink), this resistor has to dissipate power, many times superior to the passport.
However, 484 W for he, too, will be impossible — will melt. Given this, the lower (e.g., four times) power per 100-Ohm ПЭВ30 by including in series with special damping resistance. Then the current that will flow in this circuit is also reduced and becomes equal to the calculated 0.55. this means that the voltage drop across the resistor-the heater will now constitute only 55 V.
But at 220 V. Therefore, 165 In the a — share damp resistance whose value, in accordance with school law, electrical engineering, must be equal to 300 Ohms. As such a circuit element is the best fit capacitor (e.g., type MBGC), designed for a working voltage of 250 to 300 V.
From the theory we know that the equivalent resistance of a capacitor with a capacitance of 1 UF at a frequency of 50 Hz is approximately 3 kω. We need 300 Ohms. Given this, the capacity of the quenching capacitor select a 10 times greater, i.e. equal to 10 µf.
So, the required data is received. Now you can go directly to the soldering iron.
Rod grind out (or purchase and subsequent completion); material — red copper, diameter — minimal (with respect to the inner hole of the selected resistor) gap, which in the Assembly is recommended to fill a silicate office glue (on the drawing conventionally not shown). Glue though and worsens the heat transfer from the heater, but DAMPS the system “copper rod, nichrome spiral”, protecting the fragile ceramic base vitrified resistors from cracking. Besides the crystallized adhesive layer practically eliminates the occurrence of backlash in the primary node of the soldering iron. 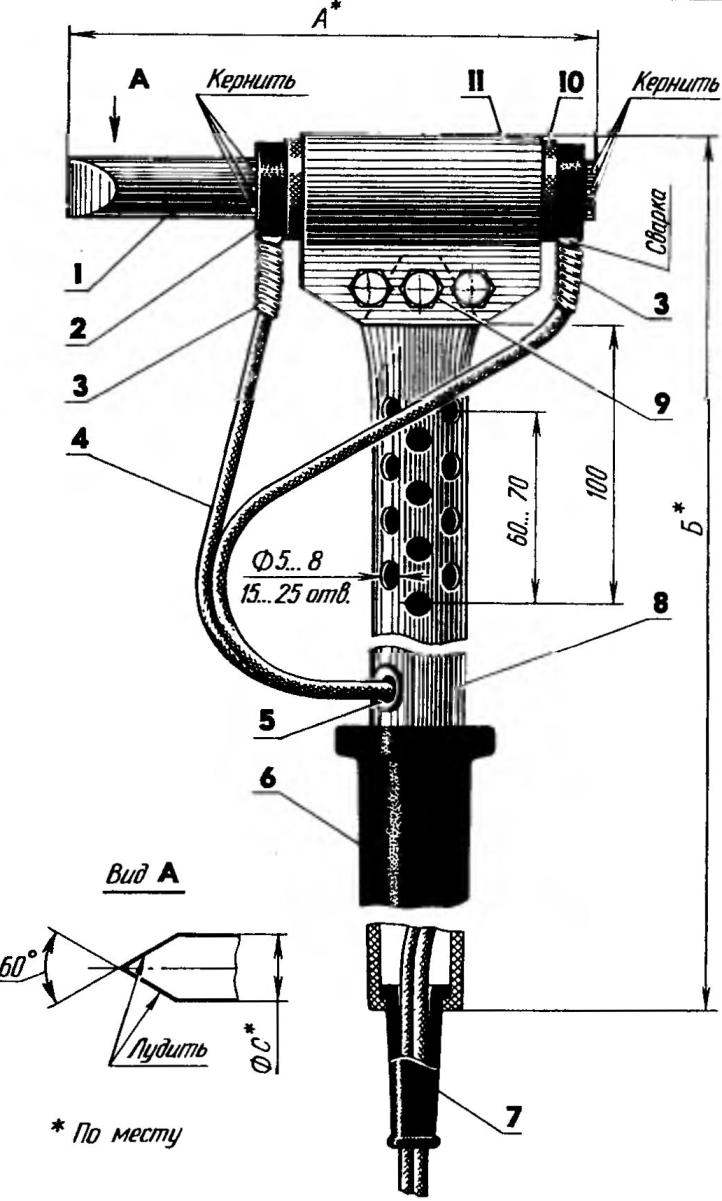 Soldering iron based on the resistor:
1 — stinger (copper rod), 2 — resistor, 3 — filament asbestos, 4 — cable, 5 — Bush, ceramic, 6 — arm (plastic based on thermoset resins), 7 — bushing, rubber, 8 — housing-tube is metallic, 9 — bolt M4 (3 PCs.), 10 — insulation (varnished cloth), 11 — a casing of metal.
As for conductors, is welded to the terminals of the resistor, they seemingly can simply print out through the hole in the tube-housing. But at high power soldering iron it is difficult to avoid melting and burning the insulation of the cord (and there is not far to short circuit). Therefore, it is better to err, increasing the insulation in the connection place lived the resistor heat-resistant asbestos thread (with subsequent impregnation with silicate glue) and installing the ceramic sleeve and on the casing tube. Not be amiss and the additional use of elastic (rubber) bushing on the input cord in the handle of the soldering iron.
the last Council. Soldering iron power can be quickly changed by adding or reducing the capacitance of the capacitor in the battery. For example, to quickly heat the working rod is sufficiently used instead of 10 UF in parallel to include two more. The total capacity of the battery will increase, then tripled. As they reach the desired temperature the power is cut, leaving connected, say, 20 UF (prolonged use is limited to only 10 µf). Moreover, if a mass of heated solid rod, I happen to be a preference for the soldering iron, and the quenching container, the actual par value which is less than the required, and only rarely (and briefly) connect reserve the entire capacitor Bank.
Perhaps the above details of fabrication and calculate the resistor soldering irons seem to someone not too relevant, but I think it will be useful not only for homebrew.