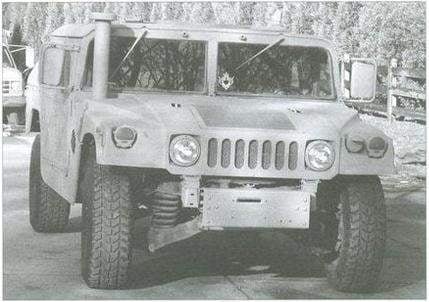 After the First world war, the car confidently entered the arsenals of all armies, effectively replacing cavalry units and horse-drawn vehicles at the same time with the advantages of this type of technology was evident his shortcomings. So. military all over the world started talking about the unification of the army fleet. They wanted to have a universal chassis capable of small alterations to carry infantry units, may be used as a machine gun car, serve the mobile radio, light or sanitary staff van, towing artillery and chassis for armored car.

USA during the Second world war did not create a car “for all occasions”, and has standardized two sample – light Willys MB jeep (“jeep”) and a relatively heavy Т214 Dodge (“Dodge 3’4”),

Supplied these machines to almost every country in the world. As wear them change on the same model, for example. MB jeep M151.
Over time, however, the us military, prise to the conclusion that “Willis” is not perfect: it is close to transport soldiers with full kit, low power for towing artillery, it is not suitable for booking And noticed it not only in the US, more and more countries for their armies began to buy British, German or Japanese jeeps.
In the late 1970s the us army has also announced plans to replace army jeep M151 vehicle new project. In the automotive market began the military order volume of about $ 60 million. and even more. In 1979, the Pentagon announced a competition on creation of the multipurpose army vehicle ХМ966, to participate in which were invited from the U.S. and other countries. Stipulated high versatility, the possibility of arming a heavy machine gun or a rocket launcher “stinger”. Requirements for patency was high: ground clearance 410 mm, movement by 60% slopes and 40% slopes and overcome vertical obstacles up to 0.46 m and water obstacles depth up to 0.76 m.
Prototypes of the car of different companies were ready by the end of 1979 and tested in Italy and Portugal until the middle of 1980 at the Nevada test center. Of all the candidates contracts for the manufacture of pilot batches for comparative testing received and the company AM General. Chrysler Defense and Teledyne Continental. Army testing began in April 1982, It consisted of field tests on the permeability and durability of inspections in the army in the field and tests in terms of deserts, jungles, mountains and coastal dunes
Point in the contest was staged on March 22, 1983, when the command has declared that the selected sample of the company AM General. It signed a contract for the supply of 55 thousand cars for popadaya five years. The amount of the transaction was $1.2 billion. a record in a long history of cooperation of the military Department with suppliers of wheeled vehicles Soon the company received the contract for production of 15 thousand of SUVs, which increased the contract amount to S1.6 billion the Wholesale price of one HMMWV was within 21 -23 thousand dollars.
During testing, AM General has called my car a Hummer (“Hummer”). to paraphrase the acronym of the official name – HMMWV, and has registered the name as a trademark In April of 1983, started rebuilding the plant at Mishawaka (Indiana) under their production. Serial production of cars under М998 index was launched in January 1985 . and in September the first batch of cars went to the 9th motorized infantry division of the US army. In 1989, he was awarded another contract for the supply of 33 thousand units within five years HMMWV became the starting point for the modernisation of the entire car fleet of the us army, replacing not only jeep Ford M151. but a number of other cars. 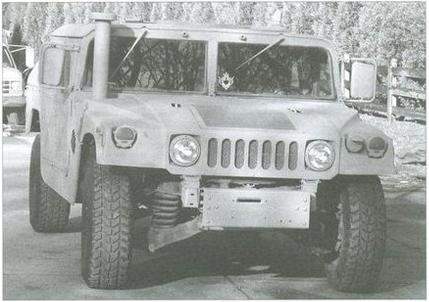 M998 HMMV just from the factory 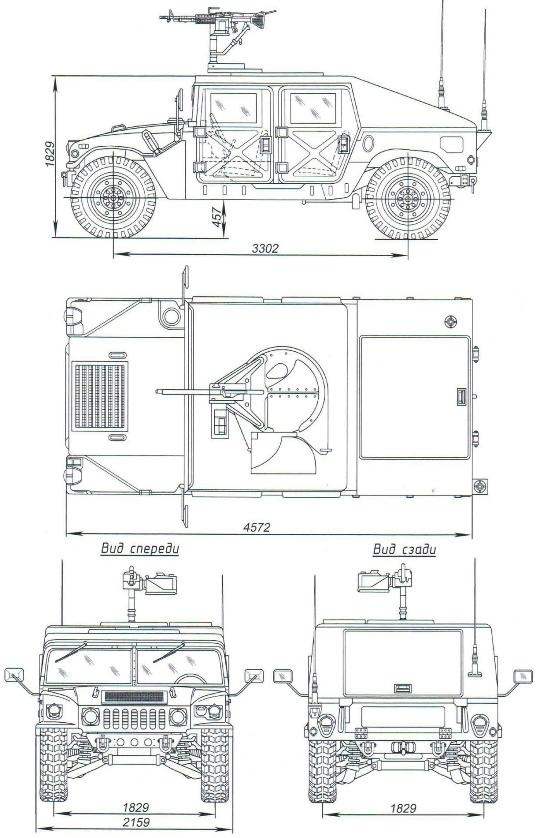 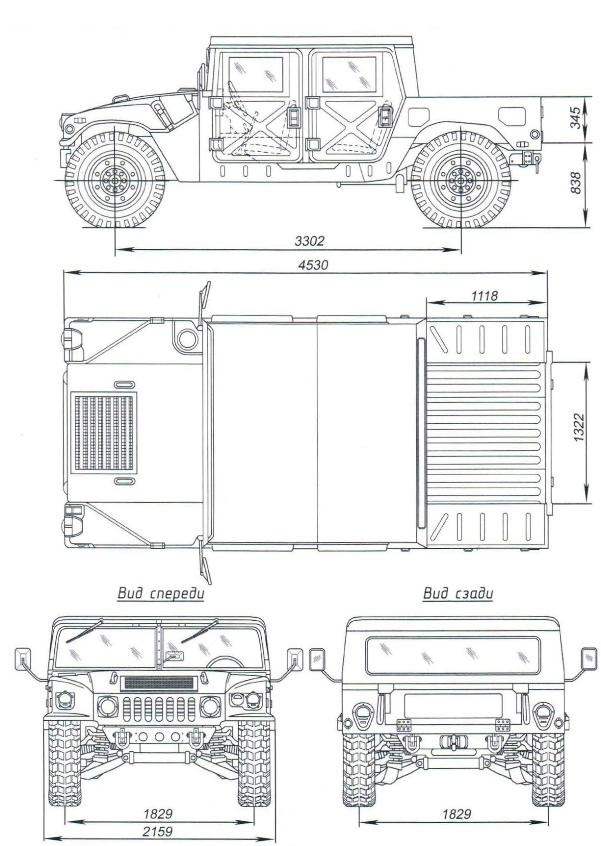 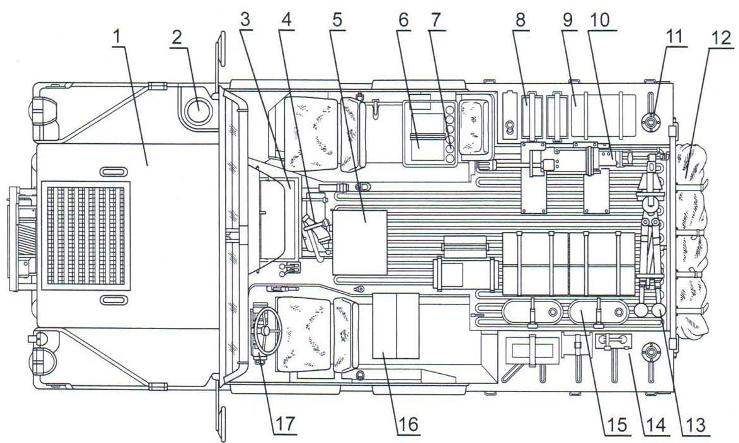 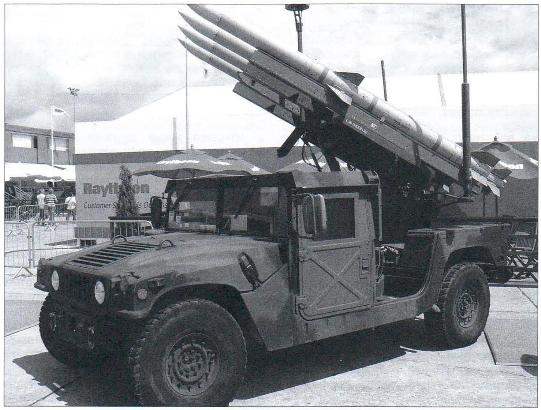 Anti-aircraft missile system RITA-120C firm Raytheon in the exhibition of arms in Paris, 2007
The main difference by which to distinguish the armoured hammer-packie outside of the door. Unarmored vehicles have them X-shaped you-stamping.
Modification and modernization
Initially, the range HMMWV AM General was six basic models. Then the army’s “Humvee” was published in the 15th basic models: two General purpose, two – for transportation of bodies-containers, eight conveyors of light weapons and three as ambulances. The main differences are modifications to the level of reservation of the body (unarmored, with built-in armor, with reinforced armor) and the presence or absence of the winch.
The main military version of the model is М998 (Cargo/Troop Carier) is a Transporter of infantry and a truck. Its curb weight is 2360 kg, payload – 1250 – 1635 kg. When in 1991 the military was required to increase capacity, AM General has strengthened the frame, the support platforms of the springs, replaced the rear springs on bopee tough, reinforced shock absorbers. As a result of the increase in curb weight is 182 kg payload increased to two tons. In the beginning of 1994, passed the following upgrades (A1) consisting in the alteration of the interior of the power supply circuits, the change gear ratios of the transmission, install a new rear axle and move the wheels larger. The improvement in 1995 (A2) was more radical: the motor was replaced by a 6.5-liter diesel (170 L. E., 393 Nm), the transmission – Quad-band with electronic control, installed Central control system tire pressure.
Further development version of the A2 has led to the emergence of variant ECV (Expanded Capability Vehicle) capable of carrying a payload of 2406 kg. was modified differentials, brakes, axles, wheels and frame. To match the traction and dynamic requirements was installed a 6.5-liter turbodiesel engine (V8, 190 L. E., 522 Nm).
Production samples of the car can be installed the following weapons: anti-tank missile system BGM-71A TOW, 40-mm automatic grenade launcher Mk.19, 12.7-mm machine gun “Browning” М2НВ and 7.62-mm M60 machine gun. In the course of the fighting in the Arabian desert in 1991, was tested self-propelled anti-aircraft system “.”, equipped with missiles-FIM-92A “stinger”. Was also tested the car, armed with 25-mm automatic cannon.
In the armies around the world
Now the car “hammer” serving in the army and Marine corps of the United States, rescue and fire services, geological exploration, a variety of government agencies. These machines are used in the armies of many countries, and the Portuguese firm Uro and the Swiss MOWAG arranged a mass production of copies of the American SUV for the needs of the armed forces of their countries. The army issued Hummers in China.
The press reported the following volumes of “hammer” abroad: Albania (over 300 items); Algeria (more than 200 PCs.); Afghanistan (over 2700 items); Bulgaria (50); Georgia (12 PCs); Greece (500 PCs + edition under license in Greece); Denmark (30 PCs.); Egypt (more than 3890 units); Israel (over 2000 items); Iraq (over 3960 PCs); Iran (10-20 pieces, transferred to France); Colombia (more than 400 PCs.); Lebanon (285 -300 PCs.); Macedonia (56 PCs.); Morocco (650 pieces); Mexico (more than 3638 PCs); Philippines (300 pieces); Croatia (12 PCs); Chile (200 PCs.); Ecuador (about 30 pieces). There is no exact quantitative data, but machines of this type are also used by the troops of Argentina, Bosnia and Herzegovina, Dominican Republic, Yemen, Estonia, Latvia, Lithuania, Luxembourg and Panama. 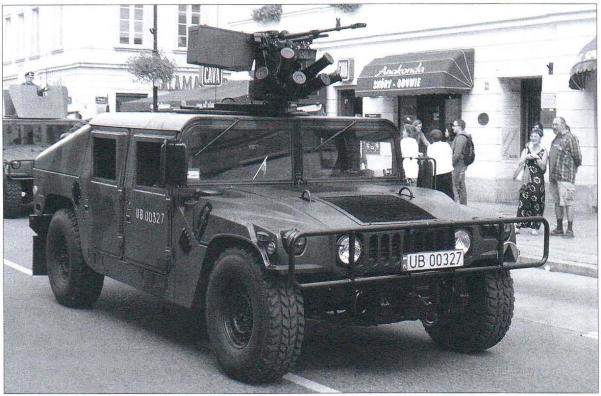 M1151 Polish on the streets of Warsaw
Many countries are seeking to purchase Hummers М1165 third generation produced since 2006 They were bought by Spain (over 150 pieces); Poland (217 PCs); Slovenia (30 PCs.); Romania (8, plans for 50 – 100 pieces); Ukraine (10 PCs obtained from the United States in peacekeeping missions). The third generation of machines used in the armies of Venezuela, Zimbabwe, Portugal, Saudi Arabia, Serbia, Slovakia, Taiwan, Turkey and Thailand.
In October 2009, media reported that the Ministry of defence of the Russian Federation considered the possibility of acquiring 3,000 units of HMMWV. The price asked for 190 thousand dollars. (obviously, this pre-owned).
Problems army “Hummer”
For a long time, the military Hummer is positioned as the best, fastest and invincible army vehicle. And only at the end of the service the Americans were forced to recognize – these machines are powerless against the old Soviet weapons and improvised guerrilla min.
The war in Iraq for the United States was both a testing ground for military equipment. Starting operation in Iraq, the Americans did not know what they will have to face after the victory. Today coalition service members have to deal not with soldiers and armored vehicles obsolete army of Saddam, but with the guerrillas, armed with grenade launchers and mines.
A chance to escape during a mine explosion and when getting into the car a cumulative shot from an RPG can be, reseeding of the internal compartments of the conveyor of “armor”. When you hit the cumulative ammunition produces a powerful stream of red-hot gas-metal mixture, which burns through steel, creating a positive pressure inside that carries the death crew.
Even worse is the case with protection against mines: even with the latest, armored vehicle М1114 “holds” the explosion of a five-kilogram mine – if it explodes under the front wheels, and just three pounds – if it goes off underneath in the back. The armor can withstand the blast from a 155-millimeter shell exploded a few meters from the car, or the fire from the machine gun bullets of 7.62 mm.
Machine guns and rocket-propelled grenades from Iraqi guerrillas abound, because the most terrible for the American soldiers job remains on patrol outside of a military base “hammer”.
With the explosion of a powerful bomb, those who are “on Board”, often receive severe concussion, and often die. The crew has even worse – from the explosive device only protects the relatively thin armored bottom.
It turns out that the most vulnerable machine in Iraq is an SUV HMMWV. In 2003 operation against the government of Saddam Hussein participated 10 thousand cars. In the future, this number had doubled. And most of the vehicles had no armor. According to American newspaper the New York Times, this machine is designed in the midst of the cold war, not only does not meet modern requirements – it originally did not meet the conditions of any theatre of hostilities.
The box-shaped body and a complete lack of armor, make “Hummer” steel coffin on wheels – the view from the narrow Windows are bad, but the machine itself – the goal is large and vulnerable.
In the framework of the program to better protect the “hammer” came М1114, but it did not solve the problem.
Information falling into the press, shows that Americans in Iraq are fleeing from the cumulative ammunition, removing the doors from their cars. However, inside the soldiers are still open for the gunners.
“Hummer” no doors have another advantage – open off-road vehicle allows you to better see what is happening around and to fire from small arms. The Americans spent a lot of money, created antisnaypersky version of the car, on the monitor in the cab which in the case of the shot shows the location of the shooter, but you don’t hear these very expensive cars were massively entered the army, and from mines microphones do not protect. 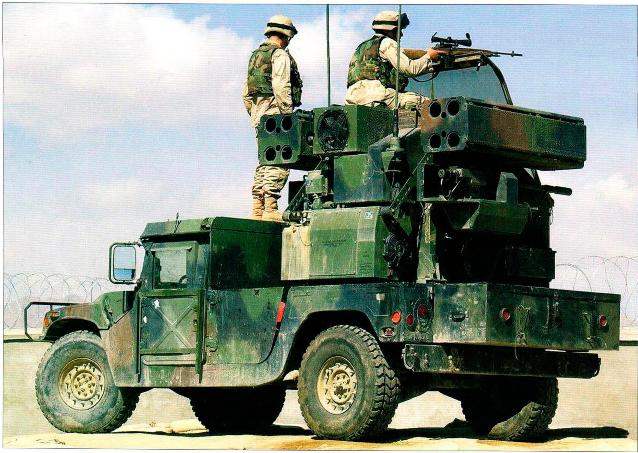 “Hammer” М1025А1 from 7.62-m machine gun at the firing position
As one American soldier who is serving in Iraq, “every time we leave the gate of the base, we are praying.”
So, what is the result? On the one hand, the “hammer” was a revolutionary step in changing the car fleet of the us army. Outside of the fighting machine is really good. On the other hand, create light universal car-armored vehicles, the Americans also failed.
Harsh experience is that on the roads of recent military conflicts the army almost all over the world move mainly in four vehicles – a Hummer, Mercedes G-class, Land Rover Defender and our UAZ.
L. KASHCHEEV