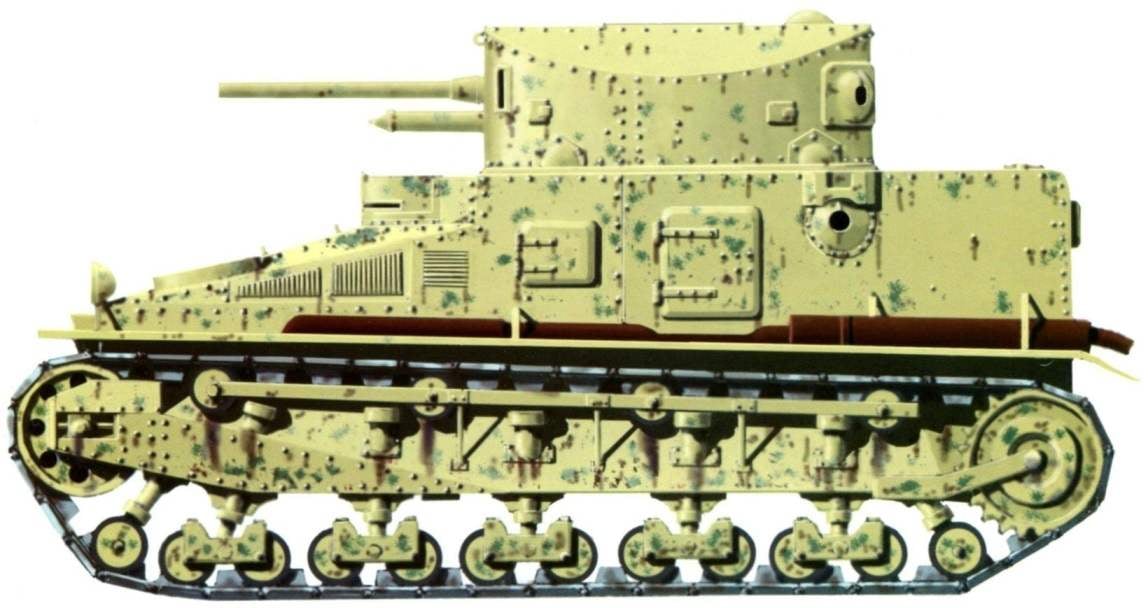 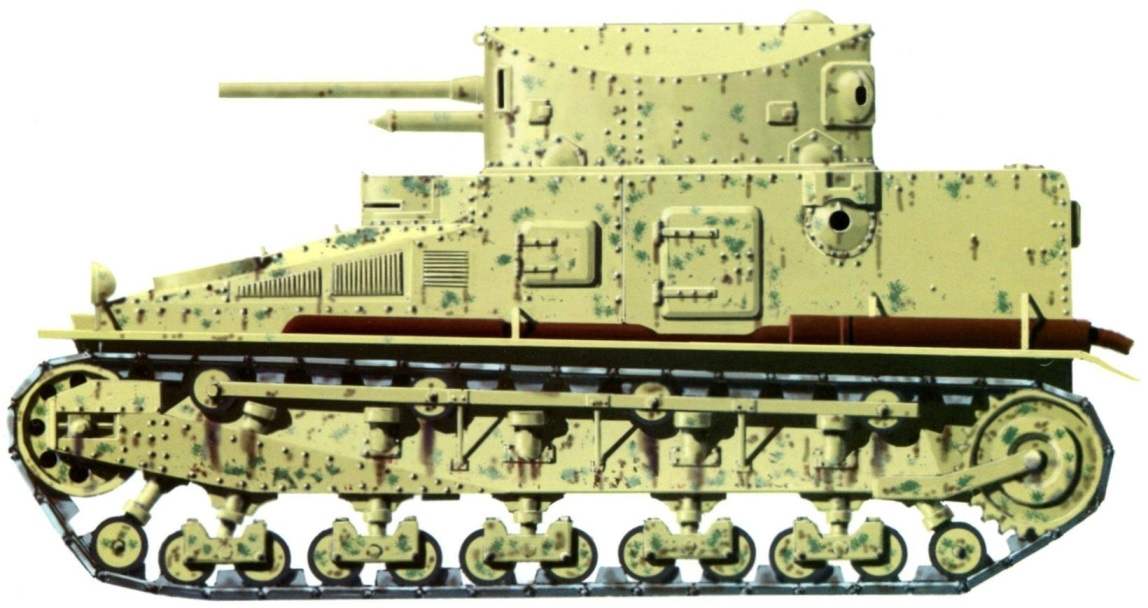 The development of the project tanks for the British army in the early 1920s was run by the company “Vickers” — England’s largest manufacturer of weapons and armored vehicles. The new machine began to enter the army in 1922 and received specification of “Medium tank “Vickers” mark I” and the designation MK.I. Behind it rose the name of “Vickers”, “Medium”, she was also known as “Vickers” 12-ton”. Within ten years it was the only medium tank in the British army. The modification of the base sample had the designation MK.II, MK.II* (“star”) and MK.IIA issue 1926/1927.

Serial medium tank of the 1920s was pretty fast and developed a speed of 26 km/h. However, the most impressive was the service. So, in the tower with a circular rotation of the installed 47-mm cannon, which was six machine guns, “Vickers” with liquid cooling. Four of them were in the tower, and two in the stern. Two more were placed on the sides of the hull; they had machines, which allowed firing at the planes. On the latest model of this tank there was even a special gun for anti-aircraft fire, which was located in the recess on the rear section of the tower.
The tower itself was cylindrical in shape. The thickness of its armor was extremely small — only 8 — 16mm that could protect from bullets, but not from shells. Armor protection has decided to increase due to the introduction of the side and stern of the bevels. Initially, the tower was missing the commander’s cupola, but then it is still set.
The engine of the tank was located in the front and drive wheels at the rear, which required a driveline under the floor of the fighting compartment and, accordingly, increased the height, but at the same time increased its security. The original solution was a removable floor panel to facilitate access to the gearbox and differential, so service them, no problems. But the presence of the radiator grilles, is located again in front and on both sides of the fighting compartment, was a serious drawback.
In the first samples the driver was located so that his head was at the level of the roof of the fighting compartment, but later, to improve his visibility, the driver lifted, installing a round observation tower at the right front of the hull. However, it started to interfere with shooting to the right, although British designers to this fact for some reason did not pay any attention. 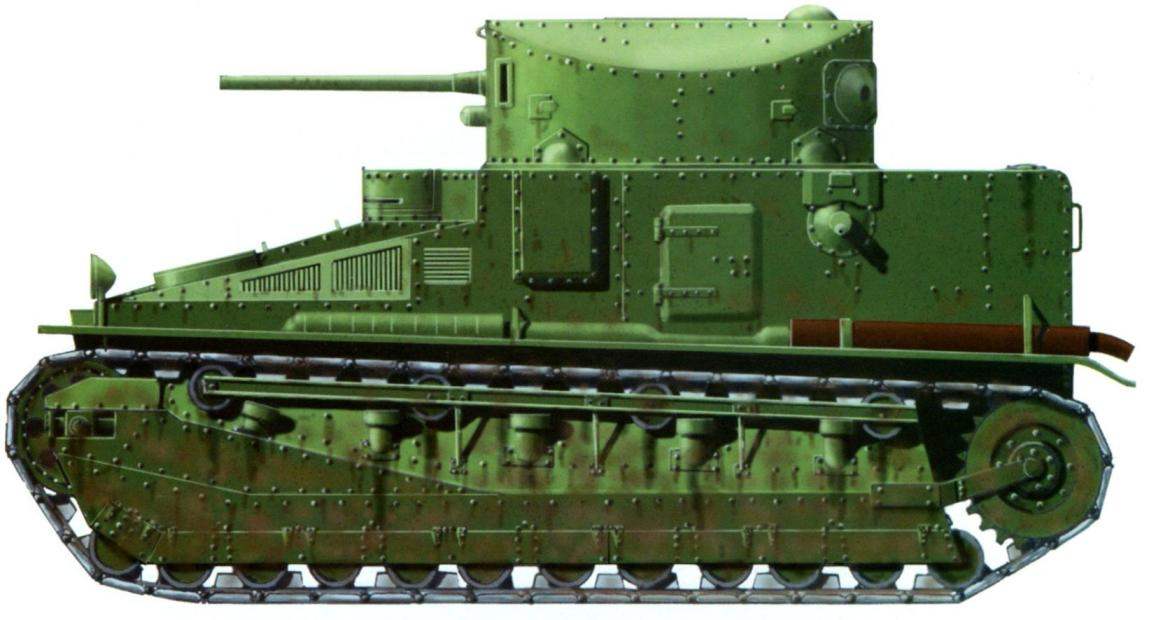 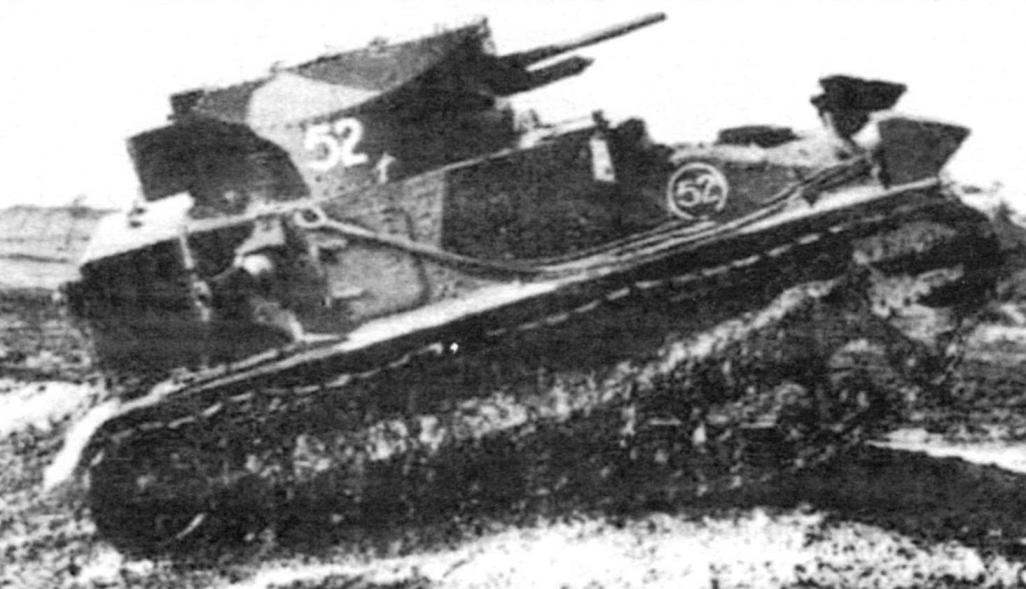 Tank “Vickers Medium” MK.I
For entry and exit of the crew on the sides of the tank had large hatches. In addition, it was possible to use the aft door (such a technical solution at that time has captivated many designers of armored cars). The sides were also small hatches were used to load ammunition.
Working conditions the five crew members in the tank was quite comfortable. So, there was good ventilation, drinking water tank and another water tank was installed outside on the left, and so that it passed under the exhaust pipe. As a result, the crew has always had at its disposal a solid supply of hot water and odjezdu their own, could wash away the dirt and grime.
Tank “Vickers” stamps I have served as a model for many cars, but nowhere, in any country, not copied entirely. I must say that in the Soviet Union, this tank, along with the wedge “Carden-Loyd” is usually portrayed in textbooks on military equipment from the 1920s and even 1930s, in particular where they talked about the tactics of combat use of armored vehicles.
Information on the combat use of these tanks are almost there.
Apparently, they were used exclusively for training purposes. However, there is a picture of 1940, which is “Medium” shown on the British military base in Egypt. Perhaps these tanks and there was used for training crews, but maybe they were guarding the airfields.
In the beginning was made 30 tanks MK.I, followed by 50 more machines modifications MK.IA, which had somewhat thicker armor. Have been changed and the shape of the tower. So, on MK.I in the tower had three ball setup for the machine guns, “Vickers”, but MK.IA two rear installation was removed, adding to a us tower of cut sheet back. Here are located the machine gun “Guccis” air-cooled for anti-aircraft fire. 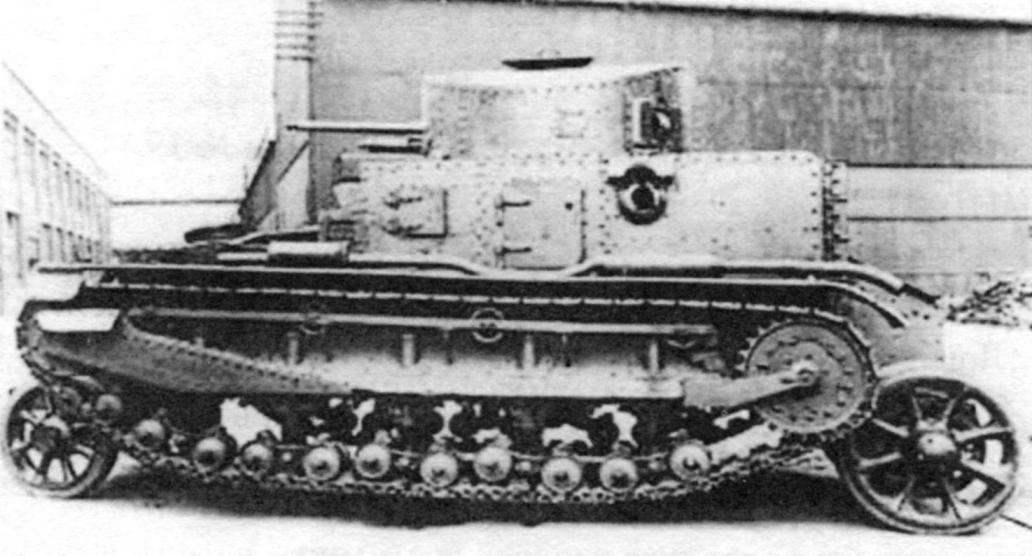 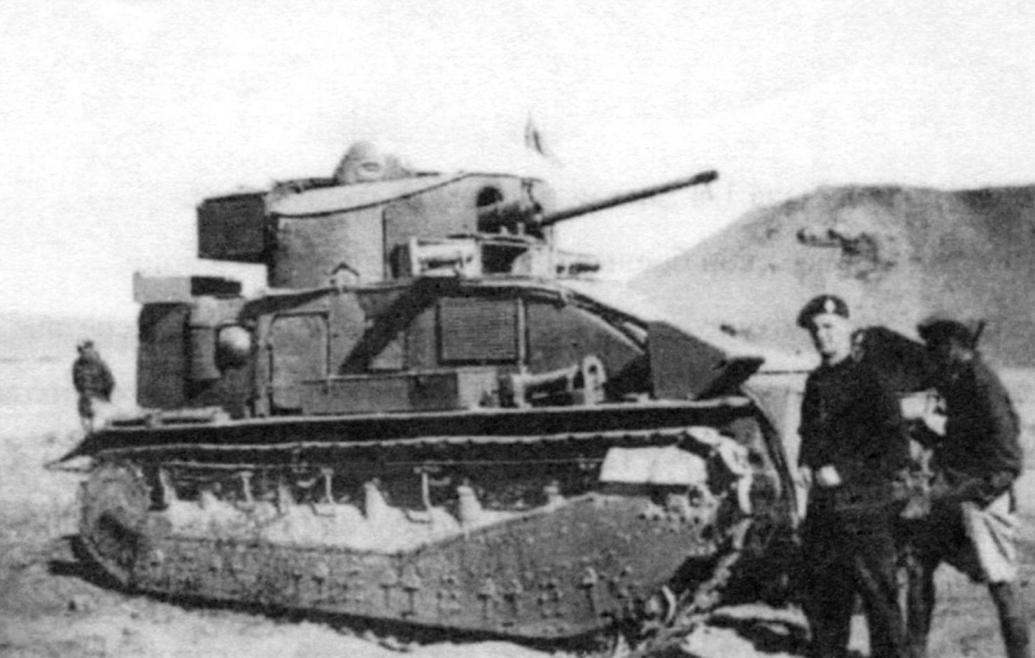 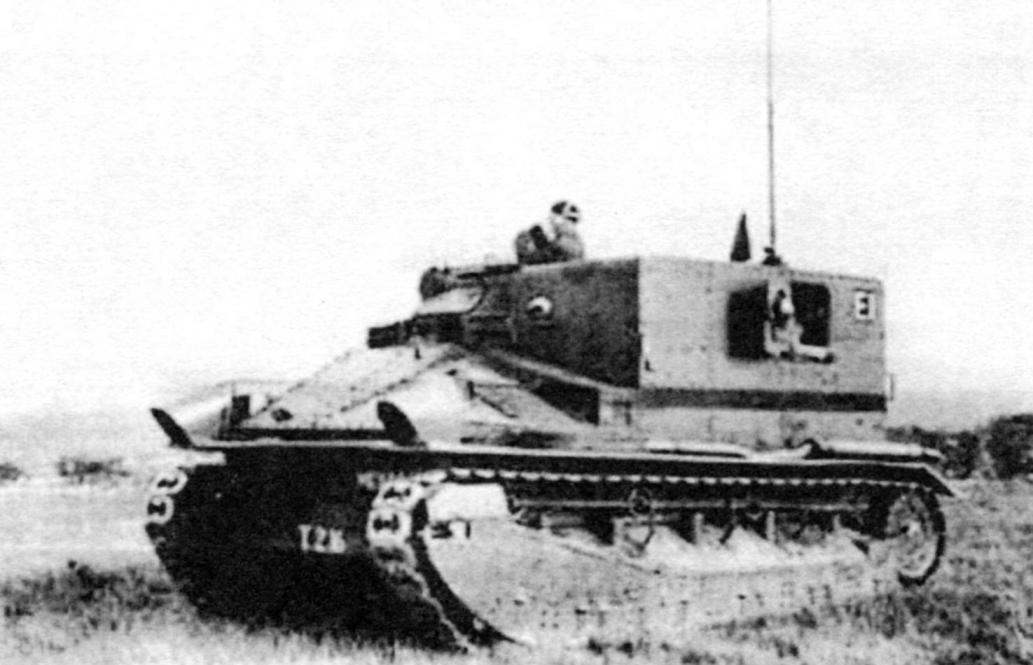 The tank control on the chassis MK.II
Another version of MK.IA* (“star”) received the “Bishop’s mitre” — commander’s cupola with two bevels on the sides. It had its own steering mechanism, so was it the commander did not depend on the rotation of the turret. Her fault was only ordinary peepholes without bullet proof glass. At the same time, the gunner has not obtained any seats and was forced to restore the gun, stepping with your feet on the floor, which was often seen lost goal.
Since 1925 it produced 100 tanks Medium MK.II, were in service until 1939, and then used in training units. At the same time with tanks armed with 47-mm gun was developed and the model of tank MK.I CS (“close spot” — “close support”), voorheese 15-pounders lightweight caliber 95 mm.
Tank MK.II** (“two star”) was a radio station, which in the rear of the turret was arranged for her armored box.
While on duty since 1923, “Medium” was the basis for many experimental designs. So, in 1926, was created by his krasnokursantsky option, which had four rubberized wheels for on-road driving is lowered and raised by motor power. And although their task designers coped, participants of trials have noted that the tank “looks more like a caravan than a fighting machine”. After the tests, the wheel was removed, and the tank gained its normal appearance. In 1927 — 1928 was tested MK.II — launched bridge with a span bridge with a length of 5.5 m, however, the success of his test is also failed. 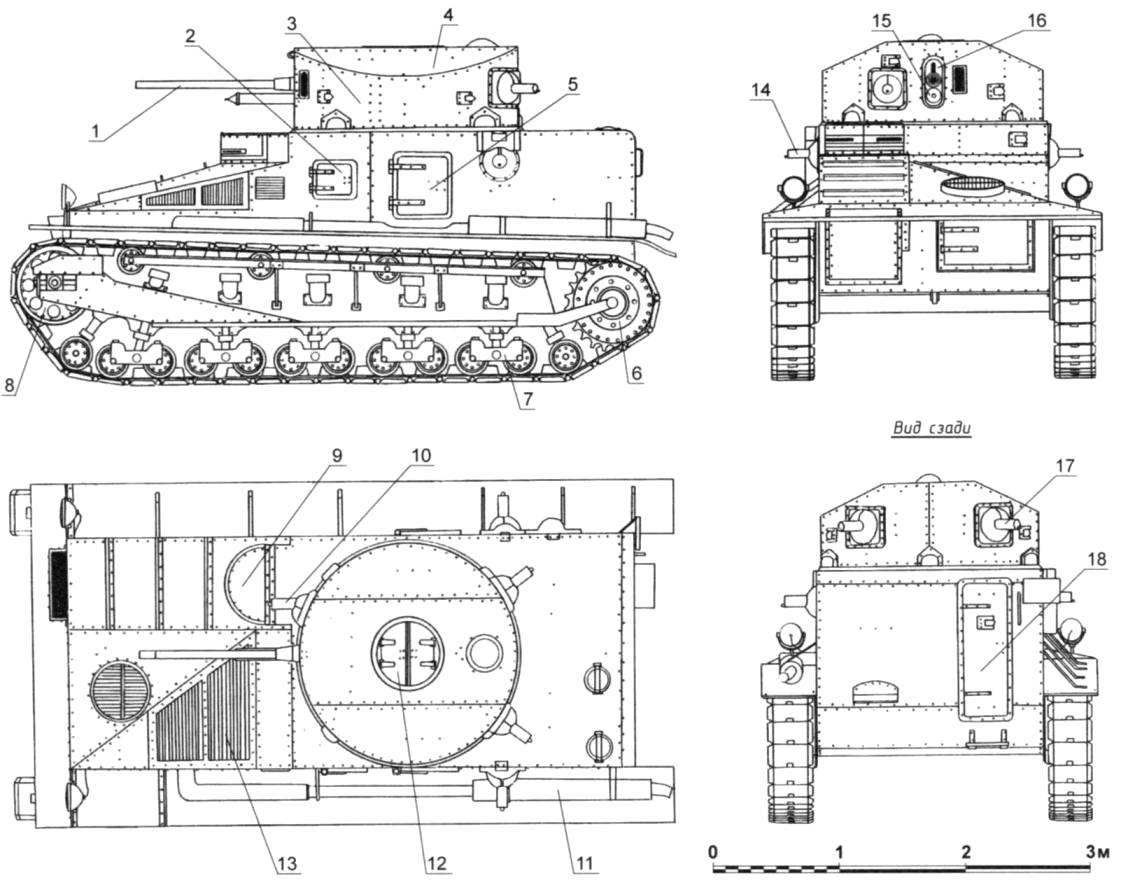 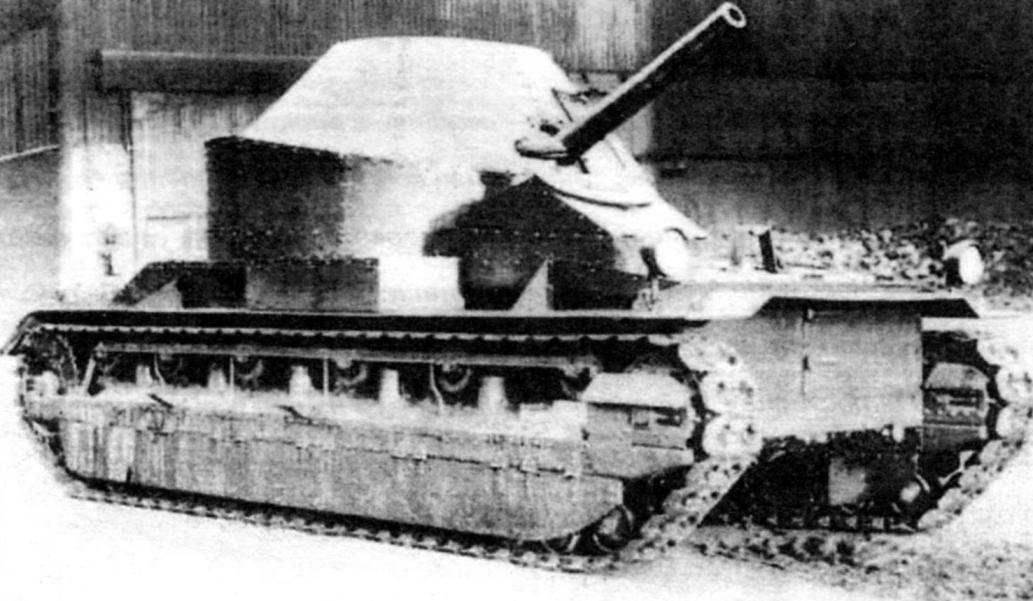 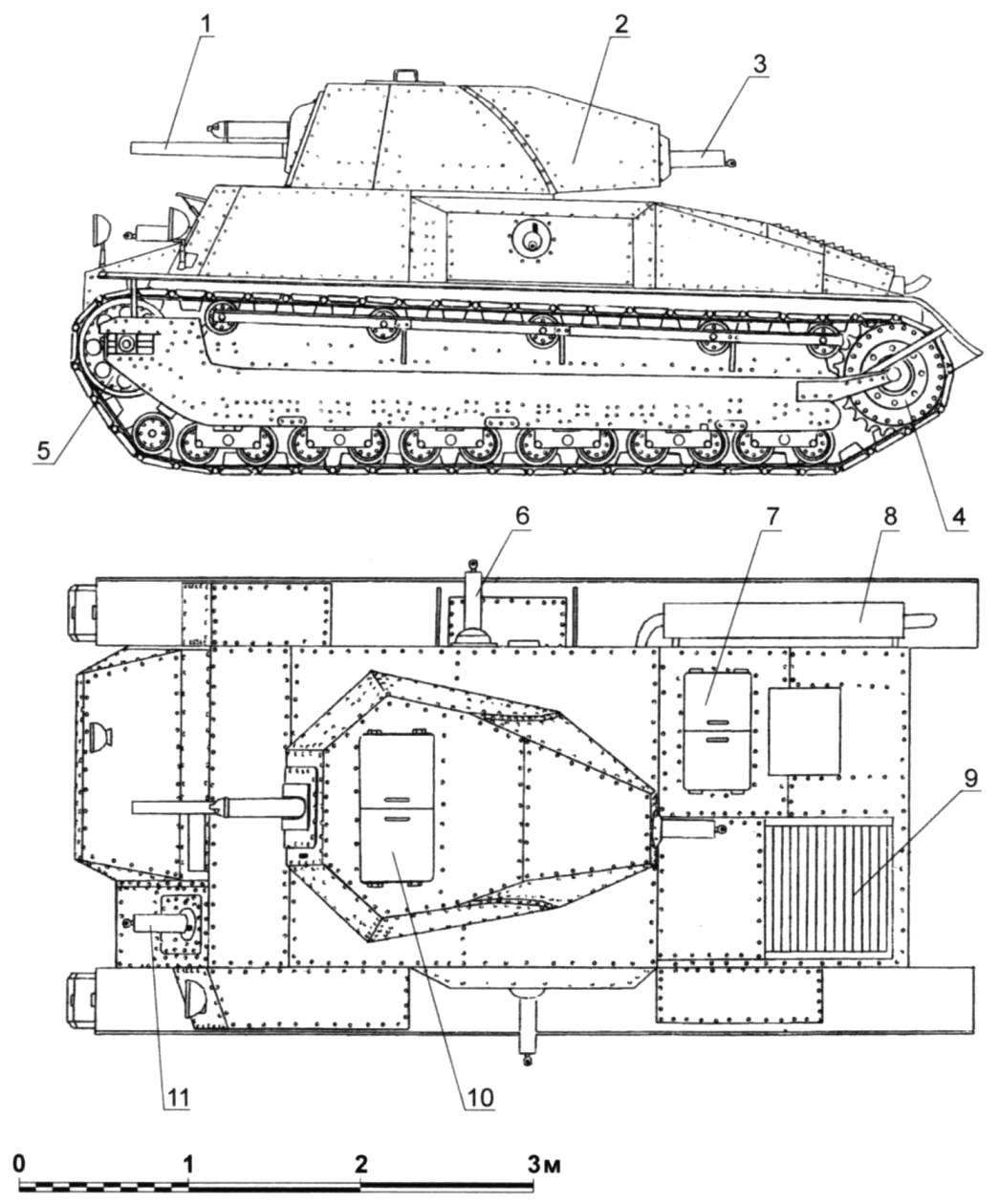 MCs:
1 — 57-mm gun; 2 — long forage tower; 3 towers aft machine gun; 4 — sprocket; 5 — a steering wheel; 6 — lateral Cabinet gun; 7 — aft hatch of the engine compartment; 8— gushel; 9 — louver of the engine; 10—the door of the tower; 11 —front Cabinet gun
Two tanks of MK.II “Female” only machine-gun armament was made to the government of India. Four tanks built to Australian Leah in 1929; they had the designation MK.II* “Special”. Three chassis were used for the prototype 18-pounder self-propelled guns.
Designed and a prototype of the control, representing a box-shaped armored hull without a turret on the chassis of the MK.II, which was to be the battalion commander. The tank had two radio stations and only one machine gun for self-defense, however, the series has not been received. This machine became the prototype for a more modern command-staff wheeled vehicles of the Second world war.
In 1926-1927 firm “Vikkers” has prepared another tank “Vickers Medium” of brand “S”. Unlike its serial counterpart, this model was released just a few instances in the series did not go.
On this car, the designers used a classic layout, namely the separation of management — in front, motor in the back. Also, the back was located and the driving wheel, while the suspension and chassis, partially closed shutter bulwarks, was almost identical to the previous model.
Two machine guns with water cooling were located on the sides, however, had no installations for anti-aircraft fire and was very badly located — inside bins for supplies that were on the shelves only tank. Therefore, the angles of attack from them was small.
The performance characteristics of medium tanks MK.II and MK.IIA. 1927/1929. 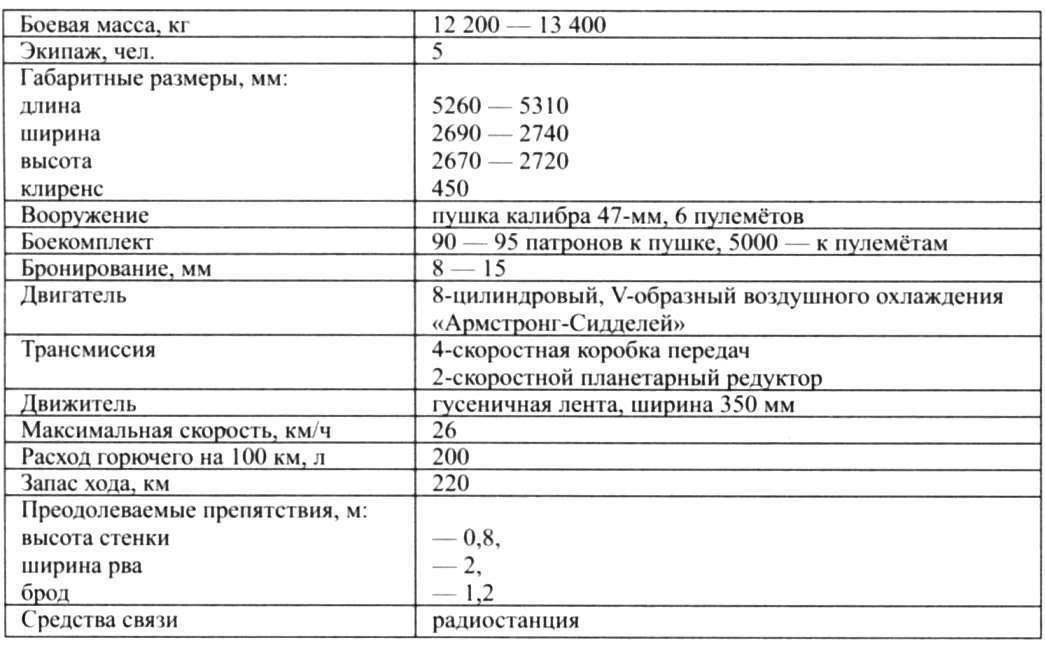 Machine gun, coaxial gun, was absent, though he stood on a tank MK.I. However, the front machine gun in the hull could carry a strong fire at the tank in front of the trenches and the trenches, especially at stops. Designers have also thrown in the tower the machine gun, firing back. We in the USSR similarly situated machine guns later became known as the “Voroshilov”, when at the end of the 1930s, they were disposed to put in the tanks this “first red officer”, “first Marshal” and the “iron Commissar”.
It turned out that strong machine gun armament of four “vickerson” with a large supply of ammunition, forward this tank could fire only one of them.
However, the company “Vickers” made the right decision with this tank. In 1927 it was purchased by Japan, and in 1929 based on it developed the first Japanese medium tanks “type 89”. Interestingly, retaining such characteristic elements of this machine, “Voroshilov” machine gun, front gun Cabinet located to the left, the Japanese gave the front armor plates of his tank flat-slanted shape. The tank had the same English width and length, the height of the roof of the tower, but the Japanese put more and commander’s observation turret, causing their car has grown up to 200 mm.