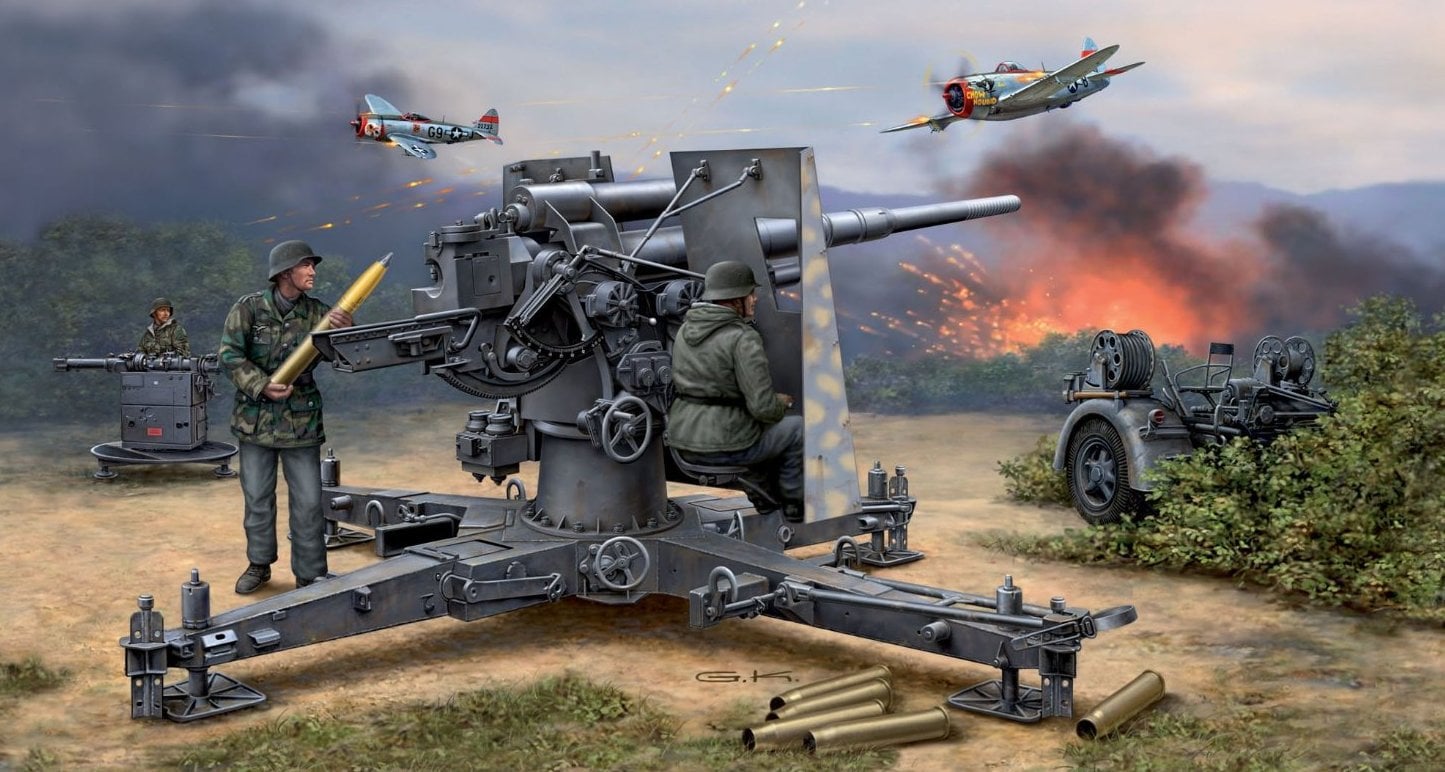 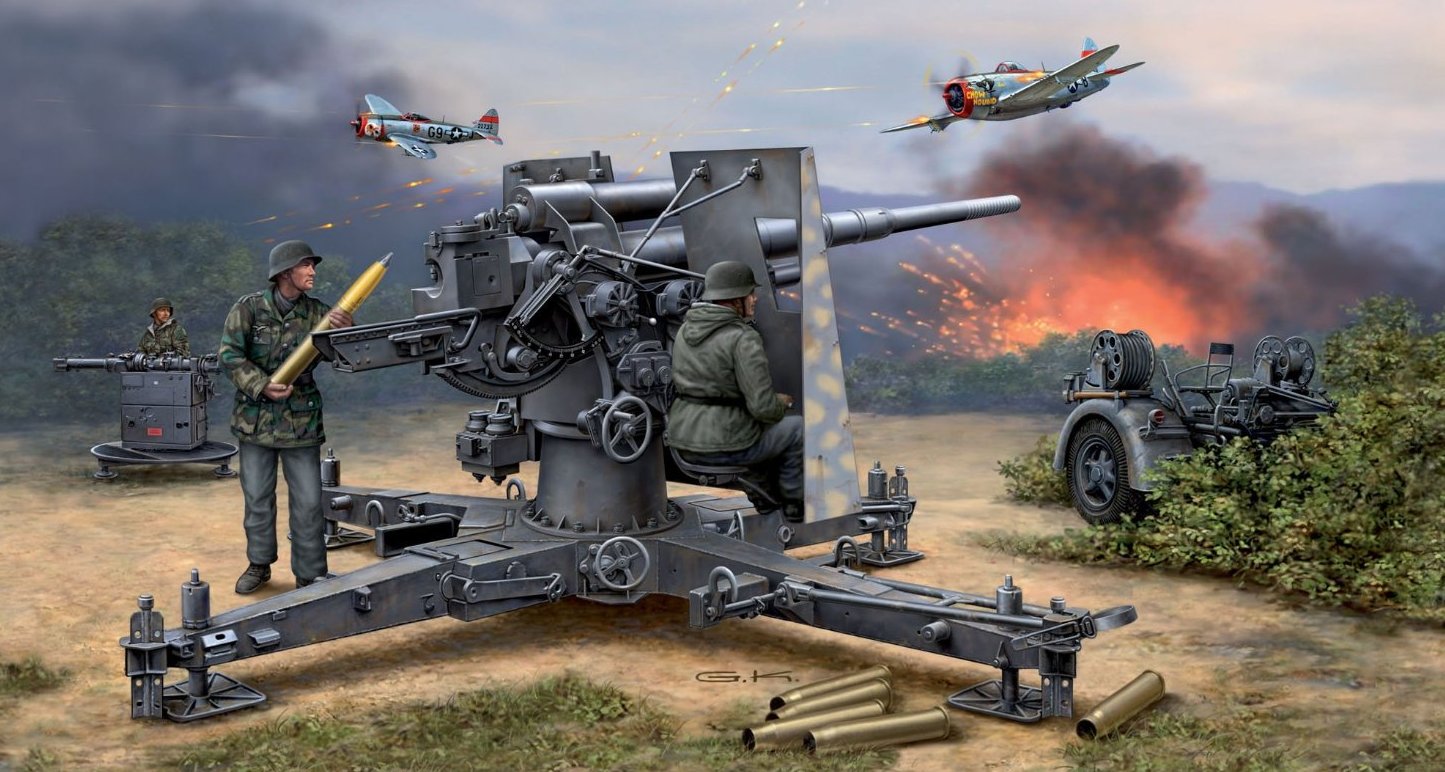 88-mm anti-aircraft gun Flak 18/36. The history of military technology is replete with examples where a particular weapon has become world famous. So, do not need additional introduction of the Soviet T-34 tank, the German bomber Ju-87, the British armored personnel carrier “Universal” American car “jeep” and many others. This list includes the German 88-mm anti-aircraft gun — without doubt, the most famous artillery piece of world war II.

Semi-automatic anti-aircraft gun of large caliber (75-105 mm) were created in Germany in the First world. However, the provisions of the Treaty of Versailles forbade the Germans to have flak artillery and guns of the Reichswehr were destroyed.
Of their creation is secretly resumed in the second half of 20-ies and conducted by German designers in Germany and in Sweden, Holland and other countries. •All new field and anti-aircraft gun designed in Germany during these years, received the designation, the number 18, that is, the “model of 1918”. In the case of requests from the governments of England or France, the Germans were able to reply that this is not a new gun, and the old, established back in 1918 during the First world war. For conspiracy and antiaircraft units until 1935 bore the name “mobile battalions” (Fahrabteilung).
The design of the 88-mm anti-aircraft guns, a group of designers of the company “Krupp” started in 1931 in Sweden. Then the technical documentation delivered to Essen, where he was made the first samples of guns. Since 1933, the flak, the designation of 8.8 cm Flak 18 (Germany, .as you know, the calibers of guns are measured in inches), began to enter the army. 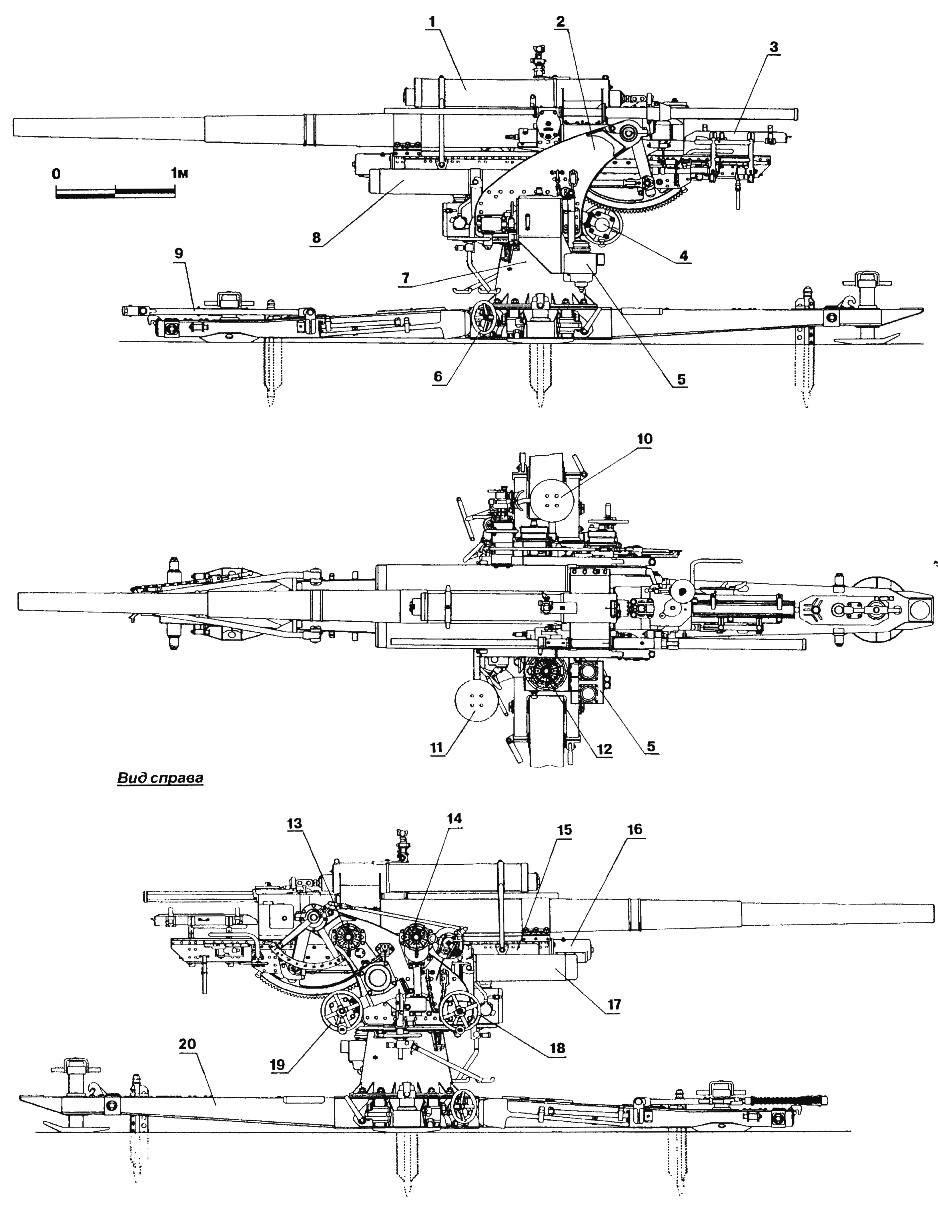 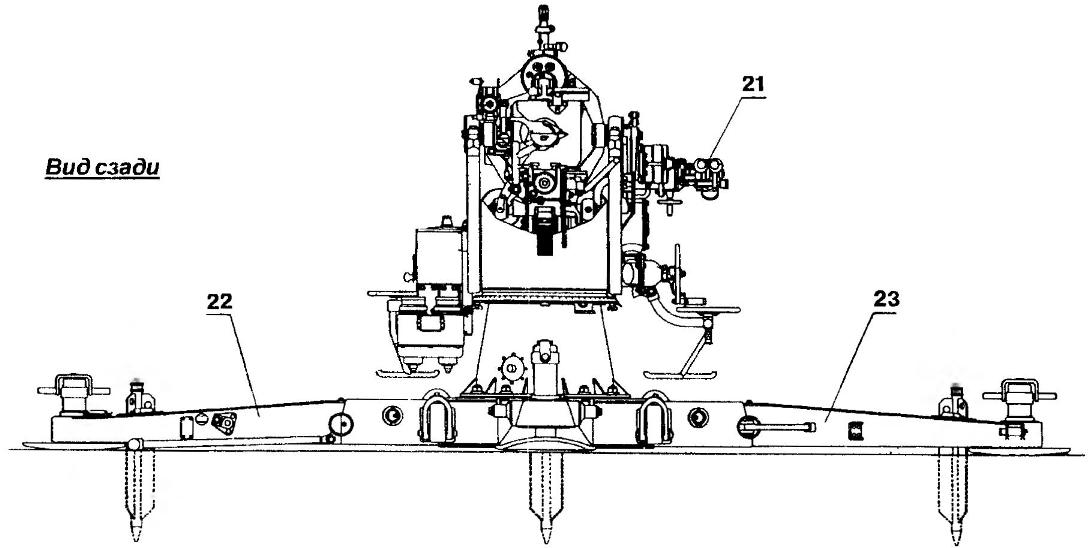 88-mm anti-aircraft gun Flak 18:
1 — lakatnik; 2 — upper bench; 3 — tray loading rod; 4 — the mechanism of vertical guidance; 5, the mechanism for setting the fuse; 6 — flywheel horizontradeco mechanism; 7 — stand; 8 — the left cylinder of the balancing mechanism; 9 — bracket trunk travelling; 10 — seat gunner; 11 — the seat of stanovich fuse; 12 — the indicator Fuze setting; 13 — the indicator vertical guidance; 14 — indicator of the horizontal guidance; 15 chairs; 16 — recoil brake; 17 — the right cylinder of the balancing mechanism; 18 — the mechanism of horizontal guidance; 19 — the mechanism of vertical guidance; 20 — longitudinal beam of the carriage; 21 — anti-aircraft sight; 22 — left of the folding stand; 23 — the right of the folding bed
Gun barrel consisted of casing, loose tube and breech. The shutter is a semi — automatic horizontal wedge.
Recoil device consisted of a hydraulic brake rollback and spindle type hydropneumatic nachalnika. The length of the rollback variable. The recoil brake is supplied by the compensator.
The base of the mast was a cross, which side of the frame when translated to the stowed position raised up, and the main longitudinal beam played the role of a wagon. To the base of the mast is attached to a pedestal on which was mounted a swivel (upper machine). The lower end of the swivel pin was embedded in the slide horizontradeco mechanism. Lifting and rotary devices were two speed guidance. The balancing mechanism was spring loaded, pull type.
Cannon was transported by two moves (podkatnyh single-axle trucks) Sd.Anh.201 which, when the gun from traveling to combat disconnected. The moves are not interchangeable: front — with single wheels, rear, with gable. 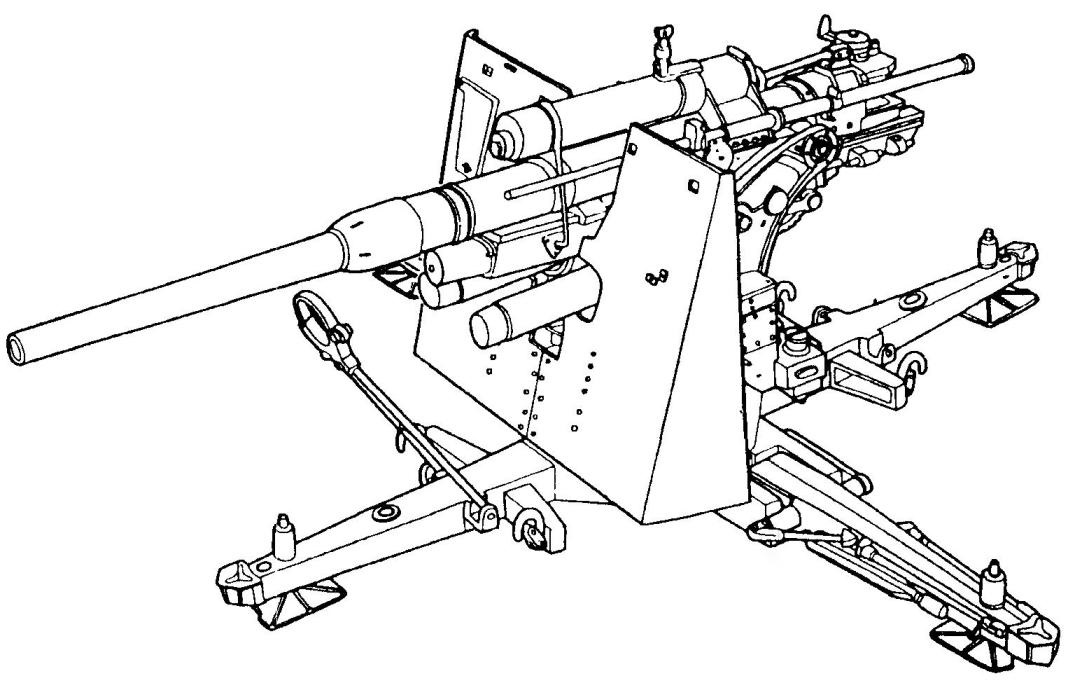 8,8 cm Flak 36
In 1936 came into service of the upgraded 88 mm gun Flak 36. The changes mainly affected the design of the barrel, receiving the detachable front portion, which facilitated its production. However, internal structure and ballistics of the barrel remained the same as the Flak 18. All brass parts of the gun were replaced with steel, which allowed to significantly reduce its cost. Has undergone modernization and carriage — front and back of the frame it became interchangeable. To tow the gun used in two of the same stroke Sd.Anh.202 saddle wheels. Made other more minor changes. In General both guns were structurally identical.
A year later appeared the next version of the Flak 37. Have guns improved display system the direction of the shooting connected with a cable to fire control device.
As towing anti-aircraft guns were used in the 8-ton half-track truck Sd.Kfz.7 company “Kraus-Maffei”.
Baptism of fire 88-mm anti-aircraft guns received in 1936 during the civil war in Spain, where they were sent as part of the German Legion “Condor”. The experience of this war guns were equipped with a shield.
On 1 September 1939 the anti-aircraft units of the Luftwaffe, there were 2459 guns Flak 18 and Flak 36, which was in service as air defense forces of the Reich and the army air defense. And in the latter they distinguished themselves the most, and not just shooting at planes. During the French campaign it was revealed that the 37-mm German anti-tank guns are absolutely powerless against the armor of the majority of French tanks. But with this task coped brilliantly remaining “unemployed” (in the air completely dominated by the German air force) 88-mm antiaircraft guns. Even more important these guns as antitank weapons increased during the fighting in North Africa and the Eastern front.
Strange to say, but these guns did not have outstanding combat performance. For example, the Soviet 85-mm anti-aircraft gun 52K no way inferior “German”, including for armor penetration, but did not become so famous. What’s the matter? Why “aht-aht” (“eight-eight”), as they called this gun the German soldiers, earned a reputation in the Wehrmacht and the armies of the anti-Hitler coalition? The reason for its popularity lies in the unconventional tactics of application.

Truck Sd.kfz.7 with anti-aircraft gun Flak 18 (1:72)
While the British, for example, in North Africa, limits the role of its a very powerful 3.7-inch anti-aircraft guns anti-aircraft the Germans used 88 mm guns firing and planes, and tanks. In November 1941, the African corps had only 35 guns caliber 88 mm, but, moving with the tanks, these guns have caused great loss of the English, “Matilda” and “Valentina”. On the Eastern front 88-mm guns were in combat formations tank units. When is the last encountered new Soviet tanks T-34 and KV, the case enters the anti-aircraft guns. Similar tactics were used by German troops until the end of the war. Naturally, as the saturation of troops new anti-tank guns the value of the 88-mm antiaircraft guns as antitank weapons gradually decreased. However, by 1944, 13 anti-tank artillery units were equipped with these anti-aircraft guns. As of August 1944 in the army was 10 930 guns Flak 18, 36 and 37, which were used on all fronts and in the air defense of the Reich.
Widely used these guns in coastal artillery.
As the actual anti-aircraft gun this gun is exhausted by the beginning of the Second world war. Therefore, in 1Э39 year firm “Rheinmetall” had begun development of a new anti-aircraft guns with improved ballistic characteristics of turistcasa — Gerät 37. When in 1941 was the first prototype, the title was changed to the 8.8 cm Flak 41. In 1942, 44 guns sent for testing to North Africa. However, half of them were at the bottom of the Mediterranean sea along with carrying their transports. The others all arrived in Tunisia.
During frontline testing it turned out that the Flak 41 has many small faults, repair which in short time was impossible. However, this gun with a barrel length of 74 caliber muzzle velocity high-explosive grenades 1000 m/s and ballistic ceiling of 14,700 m was the best medium antiaircraft gun of the caliber of the period of the Second world war. Issue flak Flak 41 was growing very slowly, and their use was complicated by the inability to use ammo from Flak 18/36. In February 1944, the air defense of the Reich there were only 279 units Flak 41.
Attempted to install the new barrel of the gun on the Flak 37 carriage. To compensate for the increased load on the old carriage, a gun barrel equipped with a muzzle brake, but this car is wide application not found.
Resulting in the anti-aircraft gun of medium caliber up to the end of the war and remained “eight-eight”. Until March 1945 the factory shop left 17 125 pieces of 88 mm anti-aircraft guns Flak 18, 36 and 37.
After Germany’s surrender these guns for some time he was armed with a number of countries. They were used in the North Korean air defense during the war in Korea.
M. KNYAZEV