We are not talking about armored planes-fighter planes or combat helicopters, and about real tanks on the tracks. But with wings. It came up in the early 1930s, American designer Walter Christie’s tanks. He proposed to attach to the tank wings and tail, and his powerful motor to make spin the propeller.
Thus, he became some sort of aircraft capable, though not quickly, and not high, but to fly. My thoughts Christie willingly shared with journalists who began to paint as an Armada of “flying tanks” across the front line, drop the wings and go to attack the enemy from the rear. “The deadly and terrible weapon of war”, -wrote the newspaper. The designer promised to create a tank weighing 4 to 6 tons, armed with 76-mm cannon. To reset wings, the crew would not have even to go out.
Such a prospect is interested in and the Soviet military and aircraft. The fact that at this time in our country began to create the airborne troops. Almost from the beginning they wanted to equip armor, but that means shipping it by air did not exist.
And here one after another began to appear projects, develop ideas Christie. It seems that the first was the project of A. N. Rafaelyantsa and V. V. Nikitin, called by the names of designers “Ratnik”. It is dated July 1932 “Ratnik” was a large monoplane with a wingspan of 17.5 m. the Tank was suspended between tall landing gear, so the tower goes into the cutout in the center section. Track chassis was equal to 4 m. the Stand was equipped with a rubber plate absorbers.
From each rack back left of the frame, connecting under the stabilizer. In this place it was attached to the crutch with a tail wheel. Stabilizer – cantilever, Kiel – single.
The tank on the drawings is very similar to the wheel-track BT-2 had just launched in a series. This choice is not surprising – the chassis of the BT-2 was created using the acquired in April 1930 license for American tank M1940, designed by the same Christie. But the engine compartment shows significantly higher. This was due to the fact that Rafaelian and Nikitin decided to use the engine M-17 with a maximum capacity from 680 HP to 730 HP (depending on compression), and the BT-2 mount M-5 (or rather, remaking the American “liberty” tank option), 400 HP Engine had to spin seated on the elongated toe of the crankshaft pusher two-bladed propeller. The back armor is attached to the fence of the propeller.
The pilot (aka the driver) was sitting in his usual place in front of the tank. In flight, the engine was fed with fuel from two tanks in the center section. The speed of the “flying tank” in the air according to the calculations worked out to about 150-160 km/h.
After landing, someone from the tank pulling the lever, and landing gear rotates about the hinge of the rear strut, going up and forward. Tank lay on the tracks, at the same time, opened the locks, connecting it with the glider. War machine went forward. The screw was not removed, but simply placed horizontally.
Interestingly, Rafaelian and Nikitin believed that tank after the battle, return to the glider, connect with them and will fly again – maybe on base, maybe on a different front. The proposals in “Ravnica” States that its range is 300 km and with an overload of up to 400 km. Great maneuver forces on the front of “vertical coverage”, “air cavalry”.

The project “the flying machine” Christy 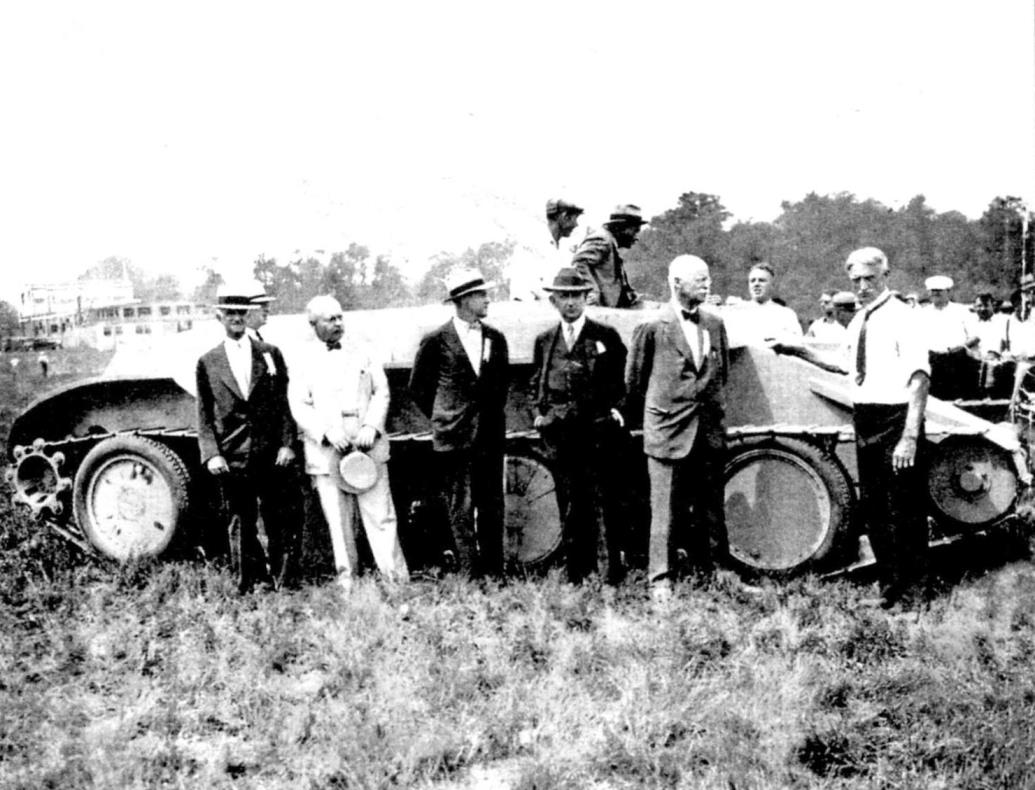 The American government Commission near lightweight tank Christie after the demonstration jump
Second, apparently, was the project of a group of employees TSAGI – P. C. Hermon, A. I. Soloviev and V. I. Matsyuk. They offered to deliver the tank to the battlefield in the glider, which dragged aircraft towing. Tank itself if it was modified only in respect of the installation of the attachment of the wing and tail boom with tail unit, though used in the power circuit.
The glider was a monoplane with a high aspect ratio wing with a span of 35.8 m (according to another document – 36 m). It was located above the tank under the “parasol” on the boar of the pipe and further connected with the machine by struts. The wing is single-spar, is completely made of wood with plywood paneling, was equipped with ailerons, fixed slats and slotted flaps. To the rear of the tank were joined by the tail boom with the tail surfaces, also a wooden structure. The plumage is tight fitting cloth. Wing tail contacted only through a tank.
The vertical tail was run double, which included two of the rudder. But on the stabilizer Elevator was not available. But on the wing side of the special beams were brought back for additional stabilizers with rudders. Length of the entire apparatus out of 12.45 m.
Take off and land intended for tracks or wheels of the tank. The glider operated turret gunner, since the driver during takeoff dispersed tank to a maximum speed, and during landing pre-spinning caterpillars.
The weight of the tank in the first version of the draft was determined in 6 – 8 MT, glider – 2 T. the role of the tug could act as a heavy bomber TB-3 with four engines M-34РНБ. However, it had to be a little easier (up to 19 tons) and equipped with three-bladed variable-pitch propellers. Later on the project was counted and it turned out that you can leave the regular wooden fixed pitch propellers.
After landing, the tank opened eight locks, disengaging the wing and tail. The advantage of this approach is the use of essentially conventional tank. It was not necessary to mount the engine with the power surplus for movement along the ground. And a lack-takeoff and landing on a tank chassis. By estimations of authors on the rise the machine was moving at a speed of 100 km/h! For tanks of that time it was unthinkable fast: on the tracks have progressed a little more than 50 km/h, on wheels up to 75 km/h. Later, the designers agreed to a speed of 80 km/h, which already looked realistic.
And the most exotic the project was presented in September 1932-known subsequently, the helicopter designer N. And. Kamov. He suggested “tank-helicopter”. However, with careful reading it became clear that it was not a helicopter, and gyroplane. If competitors in varying degrees are repelled from the Christie tank, the Kamo machine did not have anything to do with him.
It was purely a crawler, a pair of rollers connected to melanephelinites shock absorbers aircraft type. The lower part of the tank was run low and wide, with the distance between tracks is 3.5 m. Above it towered the superstructure of a teardrop cross section, which housed the engine and one of the two crew members. The designer chose the latest then the domestic engine M-34 with maximum power of 800 HP. He just was tested and did not differ high reliability. The motor rotates a pusher propeller, which was the rudder. From the motor was the shaft, raskruchivanie before takeoff the rotor. Thus, the machine Kamov was the so-called “jumping” of the gyro with a short takeoff. 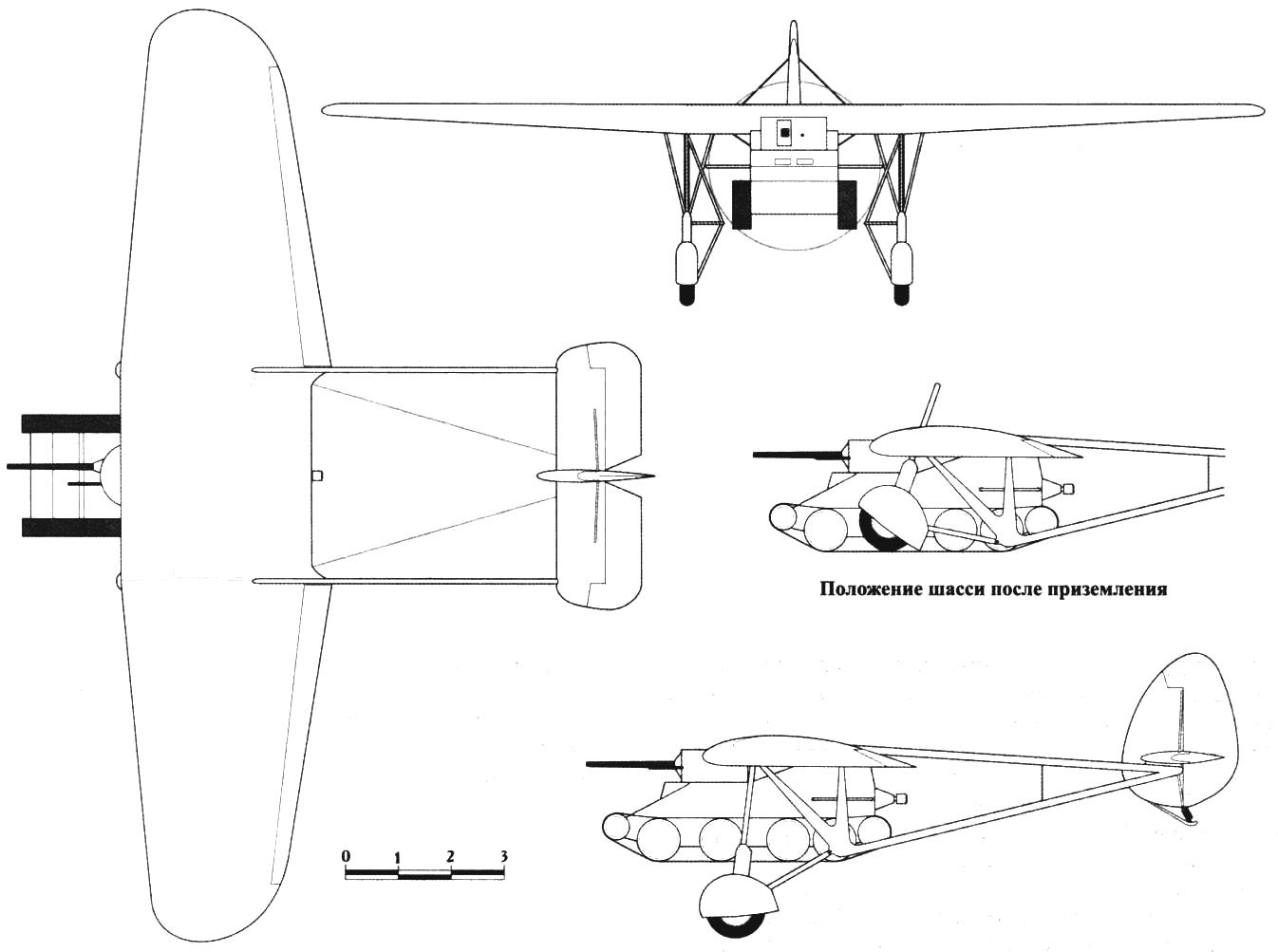 The project “RATNIK” Rafaelyantsa and Nikitina, 1932 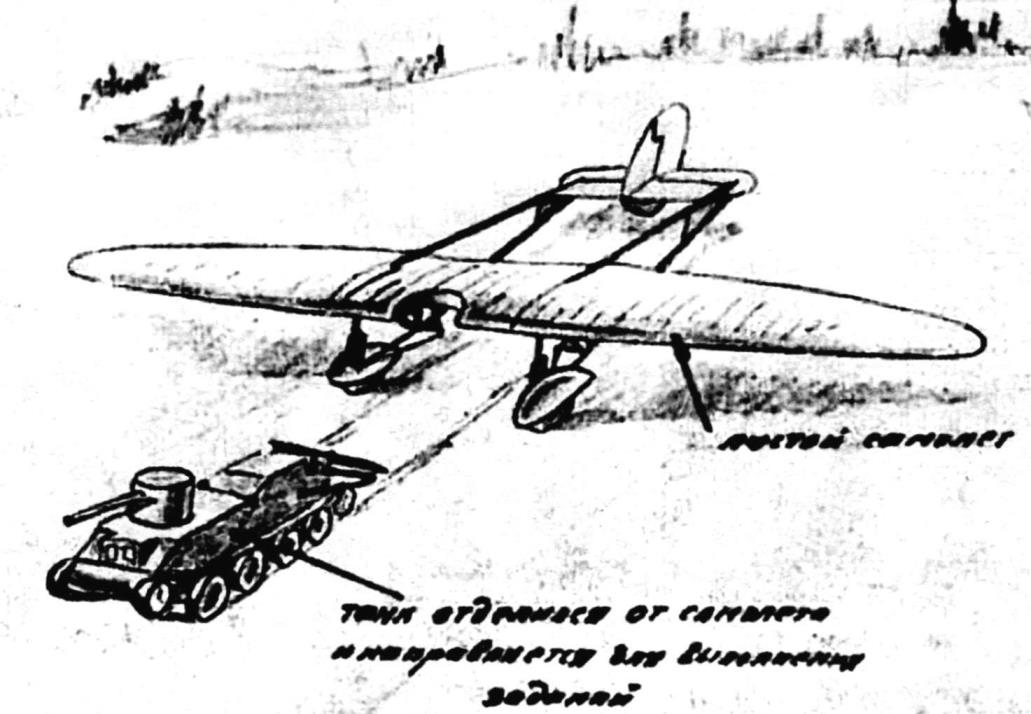 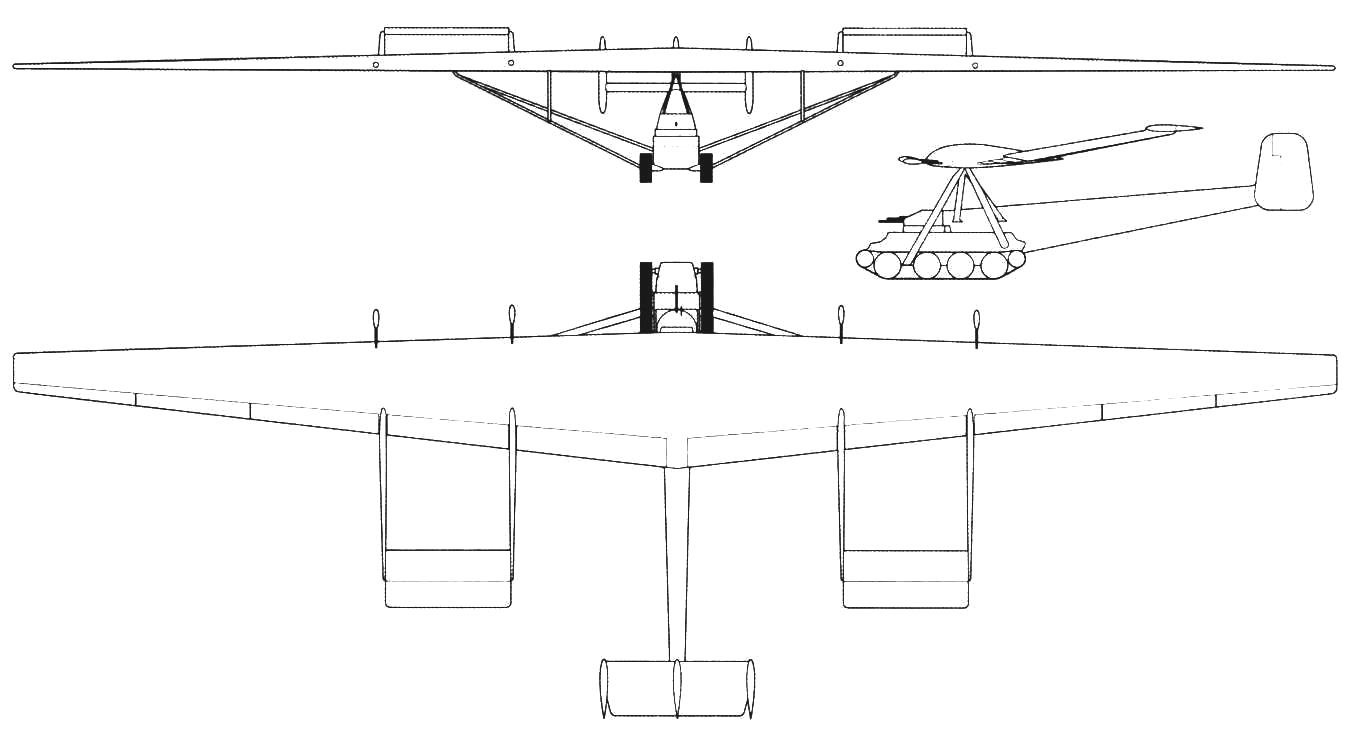 The project of the airframe to transport the tank, made Hermon, Solovyov and Matsyuk from TSAGI, 1932 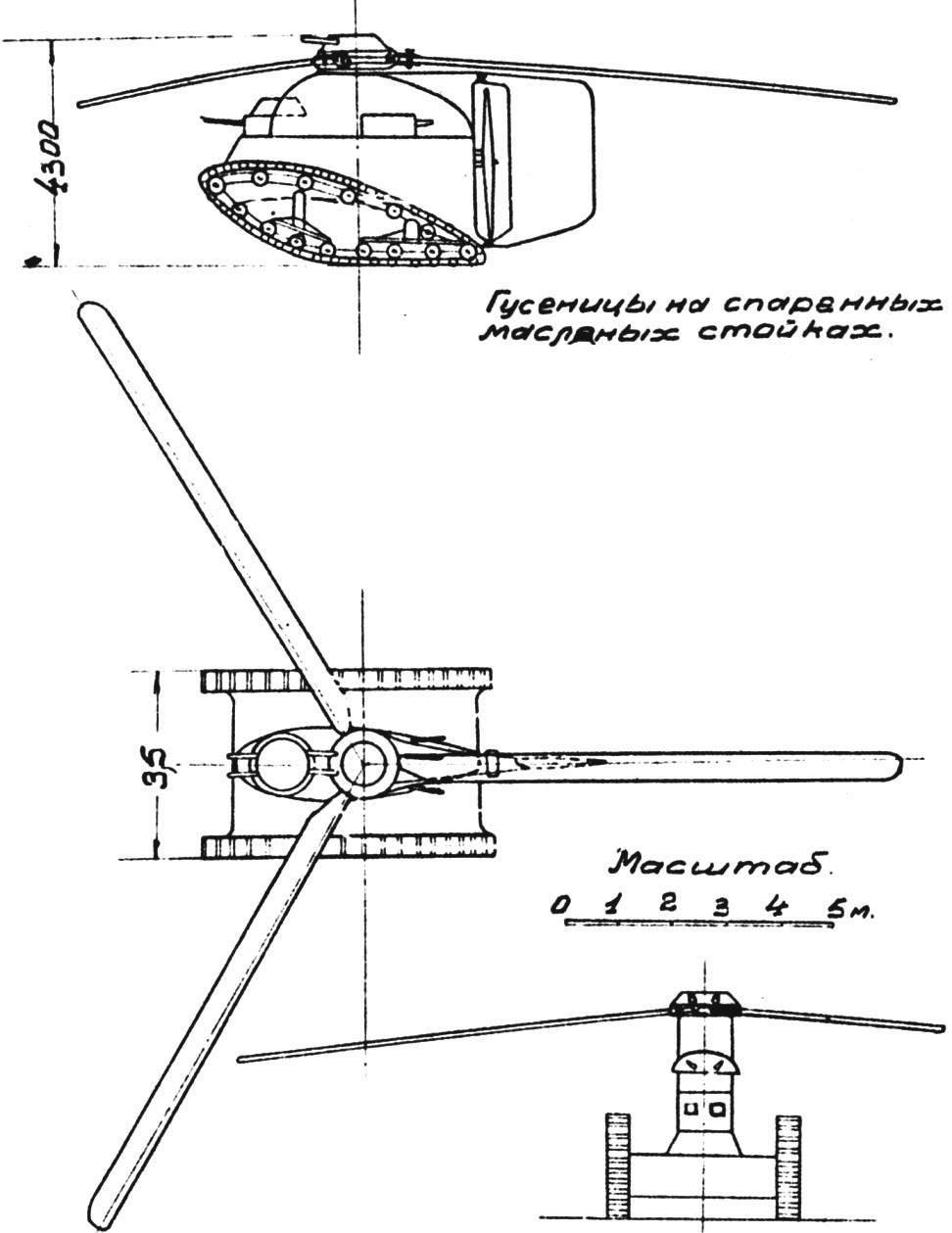 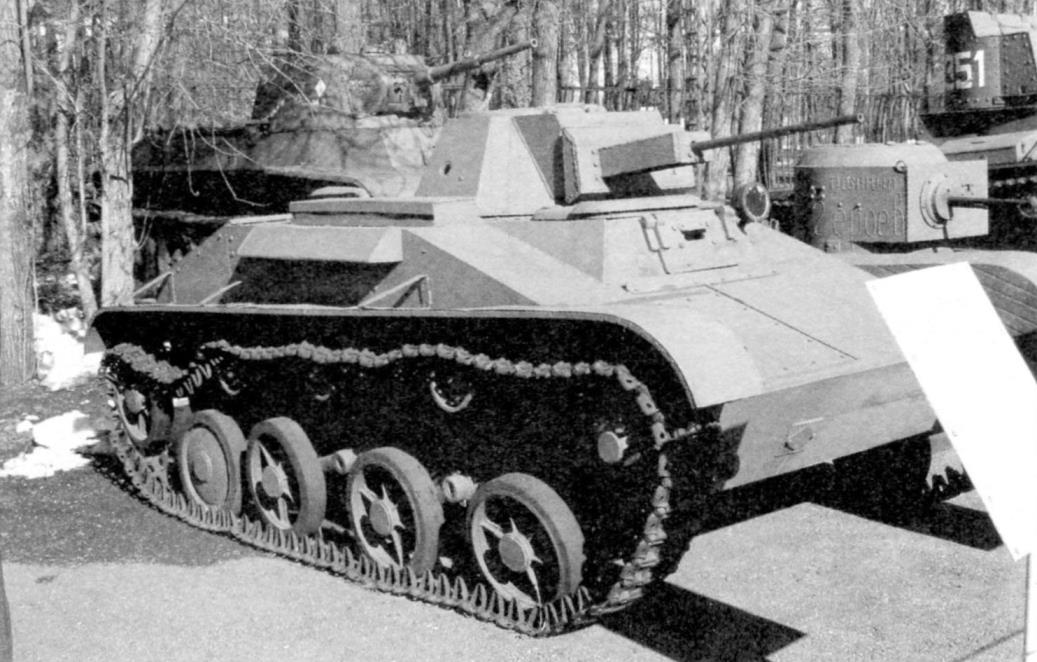 Light tank T-60, armed with 20-mm automatic cannon ShVAK; it was going to be transported by glider A-40 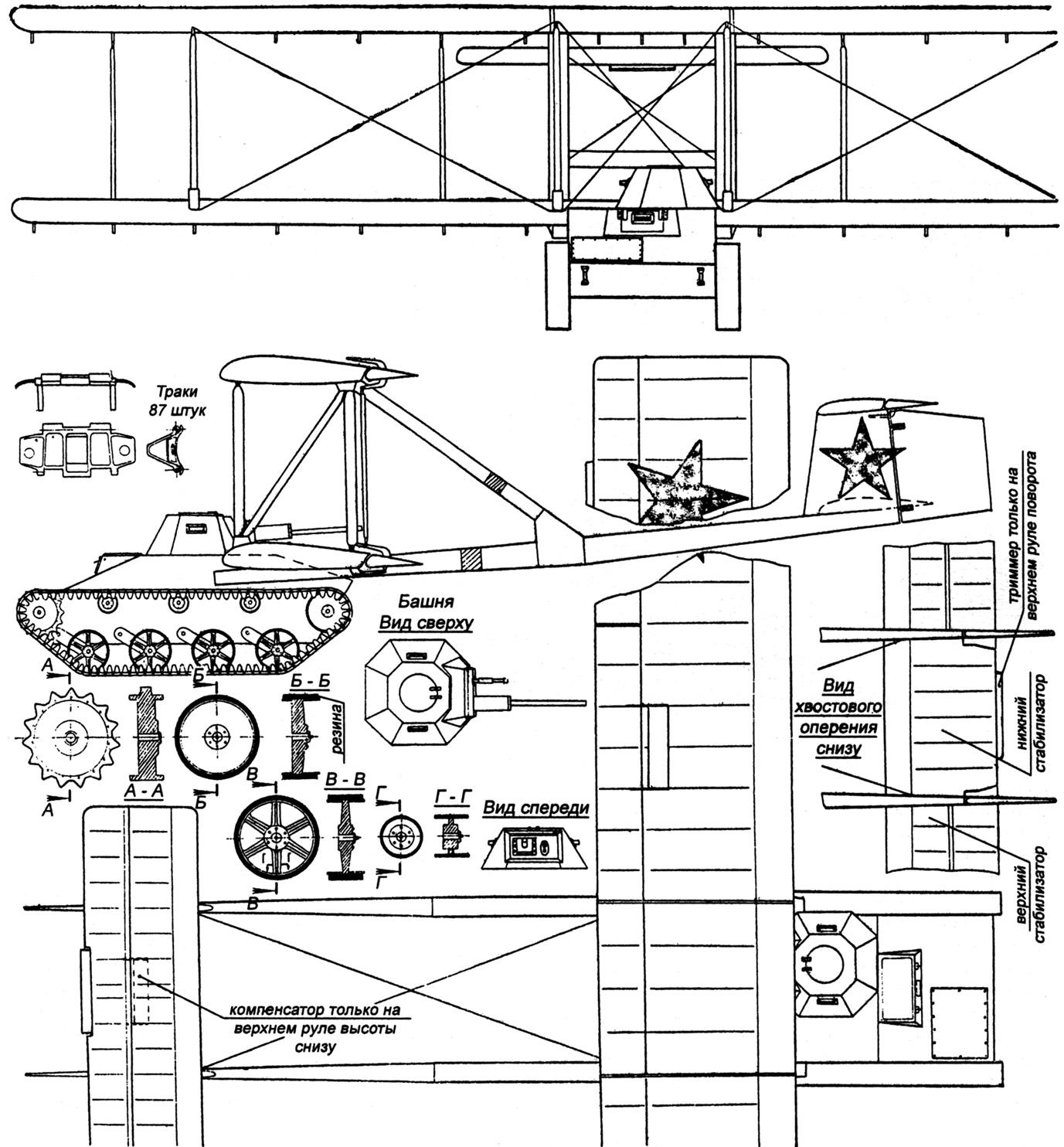 The only built sample glider A-40 Antonov. Note the lack of a tank turret. 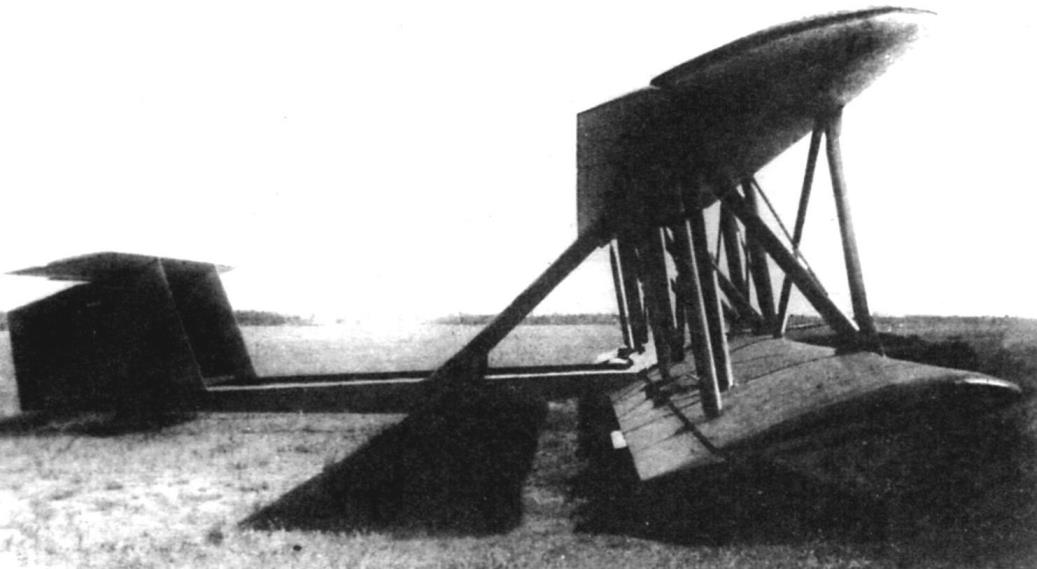 Views A-40 side
The pilot, he’s a tank driver, was sitting in his place at the front of the machine. To improve visibility for him provided for the periscope. The entire structure was made of wood, socks wings trimmed with plywood, the rest is tight fitting cloth.
The glider was mounted on the tank using a special truck-mount in four places.
The discharge was carried out by the driver from inside. The estimated weight of A-40 tank – 7804 kg, the T-60 weighed in at 5800 lbs. to Tow a “flying tank” was a four-engine TB-3 engines AM-34FRN.
The prototype A-40 was built in April 1942 in Tyumen. Tank for extremely facilitated by removing the tower and reducing the supply of fuel.
With one pilot flying weight turned 6710 kg Glider and the tank was transferred to the airport LII in Kratovo, where on 22 July 1942 the design was collected.
7 August began flight tests. Ran A-40 S. N. Anokhin. Did Jogging and approach to a height of 4 m; the glider flew at a speed of 110-115 km/h.
Then decided on flight. Hitch safely up in the air and began to gain altitude. But then the engines of the tug began to overheat. Barely managed to hold on to a nearby airfield Bykovo, where Anokhin unhooked and sat down. Stationed at the airfield when the people saw a strange device and ran away in different directions. Glyder aggravated the panic by turning on the engine of the tank and having moved to airfield buildings without resetting the glider. Anti-aircraft battery ready to fire. Only then Anokhin stopped the car and got out of it.
Unlucky “flying tank” Antonov again dismantled and returned to Kratovo. More he never rose into the air.
The idea to deliver armored vehicles through the air with gliders back in the early 50-ies. At this time in our country there was not a single production aircraft, capable of carrying tanks. And this need was, as the airborne troops quickly developed.
And in 1953, designer P. P. Karbala operating in experimental design Bureau for Engineering Committee of the army, proposed the project of glider K-73. It was intended to deliver self-propelled ASU-57 (weighing 3,000 kg) and ASU-76 (5100 kg). Self-propelled modzalevskaya from below were included in the power circuit of the glider.
K-73 was a cantilever monoplane with wingspan at 24.1 m. the Wing was equipped with ailerons and spoilers. To reduce the mileage on landing produced a flap. The pilot sat in the cockpit above the wing under a large transparent canopy. The tail beam was two, they were connected to the rear horizontal tail, which was mounted to the keel. Unlike all the previously mentioned designs, the K-73 was constructed from an aluminum alloy. The lining also mostly made of them, although the rear of the wing, stabilizer and rudder tight fitting cloth.
The glider could understand. Its nodes could carry two trucks.
Another difference from all previous similar gliders was the versatility of the K-73. Instead of artillery, he could carry a GAZ-63, ZIS-150 or ZIS-151 or a tanker truck with gasoline. Another option — 100-mm field gun, but she has to deliver by air was required to replace the wheels on the aircraft.
Maximum takeoff weight K-73 self-propelled guns – 7000 lbs. Tow it was supposed to be a twin-engine Il-12. To take off the device should have been on the tracks of self-propelled guns. The run was estimated at 700 – 880 m. the flight Speed coupling up to 260 km/h Landing was going too tracks with the application of the brakes; mileage in a meadow without them amounted to -300 m, with the inclusion of only 70 m Range, according to the calculations, it turned out to 1150 – 1250 km.
But to build a prototype K-73 did not. Self-propelled gun ASU-76 into service and was not accepted, and ASU-57 had learned to carry in containers under the wing of the Tu-4D (it took two cars). Later, the air force began to receive transport aircraft of new generation An-8, then An-12, originally designed for loading in the fuselage various wheeled and tracked vehicles.
V. KOTELNIKOV