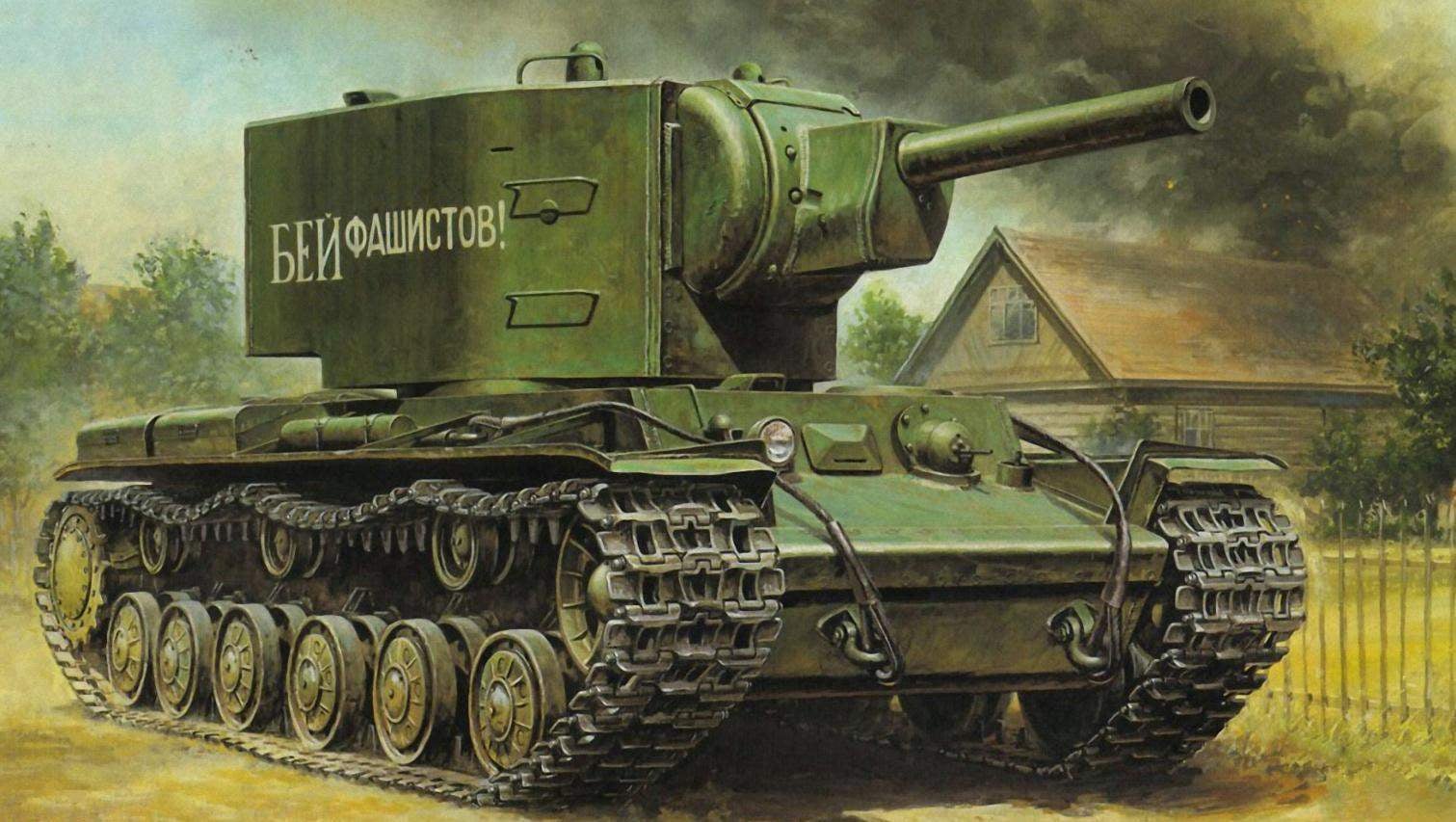 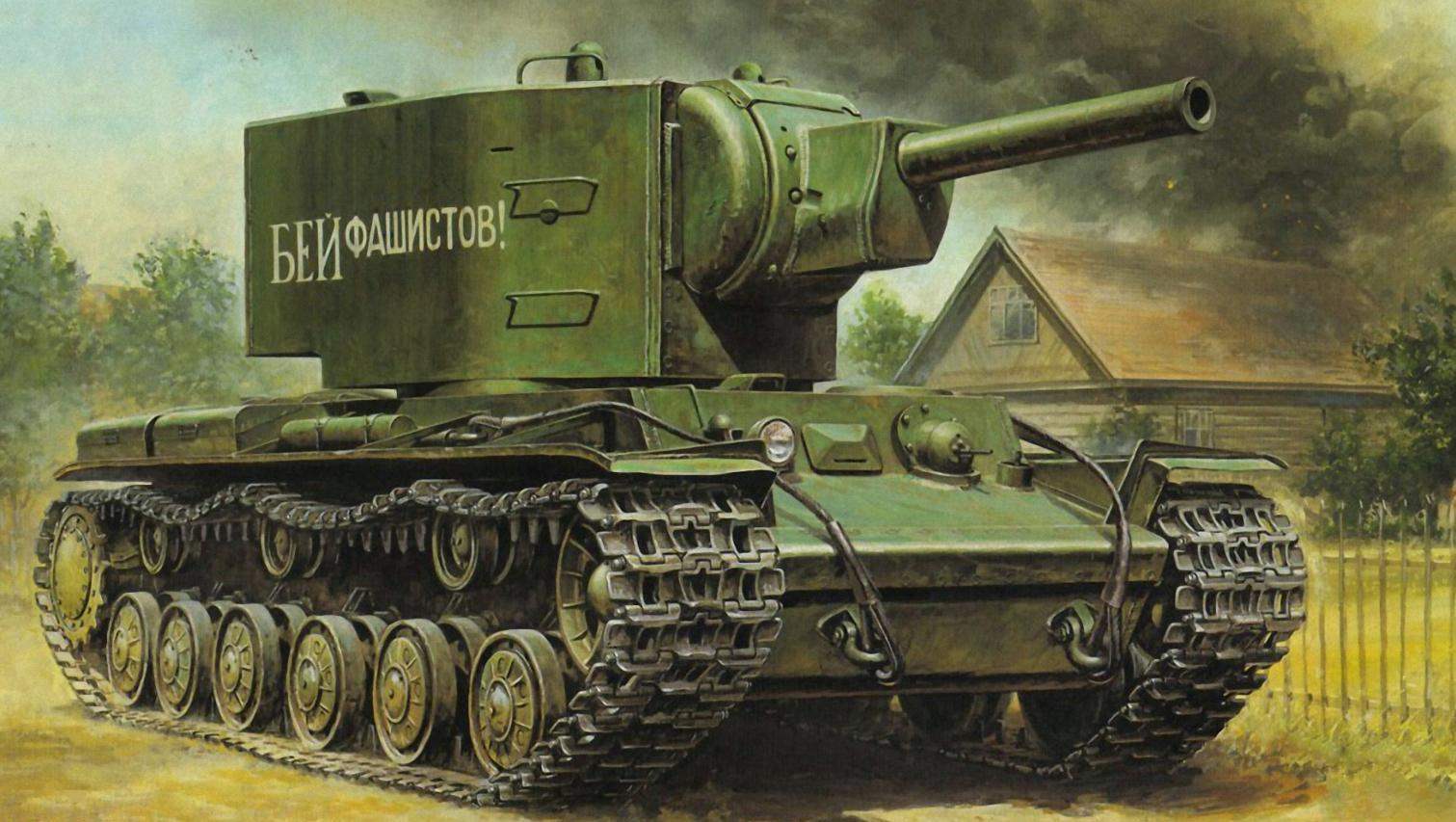 “…Earth was a dull rumble, and on the outskirts of the village of Sitno seemed huge armored vehicles unusual bright yellow color. Glistening tongues of shots, they were slowly sliding in our direction. “Rheinmetall”! — I guessed, remembering the silhouettes of German tanks in the album school. — Heavy gun seventy-five, eight hundred straight shot, the armor is forty…” Yes, the frontal armor of such a tank 45 mm gun of our BT is unlikely to take… But there was nowhere to retreat.

— Ready! Fire! — I threw the mechanics and clung to the sight. Hoping to get ahead, aim the crosshair on the ribbed tower, push the pedal down.
Hear the thunder of the shot. In crawled of sight instead of towers swirling cloud of smoke.
“What the hell? But where is tank? — I think. And why is it so stiff pedal? Looking at his feet — Oh, horror! Under the pedal is stuck down the sleeve of the projectile. So I didn’t shoot?”
Look out of the hatch. In the place where there was a German tank is Smoking black spot and lying mangled sheets of armor, and confidently turns to the right behind a huge tower of our KV. So that is who shot!
Meanwhile, SQ has engaged another enemy machine. Shot blast and flies another tower, collapsing the building. Due to the ridge there is a shot. Armor daredevil splatters a shower of sparks, and the projectile ricocheted forcit over our votes. In response, the KB shot — and another heavy German tank swung down and grunted as if in surprise…”
Well remembered Hero of the Soviet Union G. Panico about his first meeting with a Soviet heavy tank KV-2.
During the war years about this car knew a few. Fame came to the armored hero with a huge tower and a powerful short-barreled weapon, much later, when many visitors to the Central Museum of the Armed Forces of the USSR saw it at the exhibition area.
The need for such tanks appeared in the late 30-ies. It was then that the fighting on the Mannerheim line during the Russo-Finnish conflict has revealed the limited ability of our tanks in the breakthrough of permanent fortifications, with concrete gun emplacements and Natalbany. On the one hand, the 45-mm gun tanks T-26 and BT could not on its ballistic data to suppress covered firing points. On the other, bullet-proof armor did not allow these machines to come close to the embrasures in the distance, providing reliable fire damage. Even the 76 mm gun of the new experimental tank KV-1 not completely solved this problem. It was impossible to drag for direct fire large-caliber field guns — was hampered by the terrain and the fire of the enemy at the unsheeted calculation. 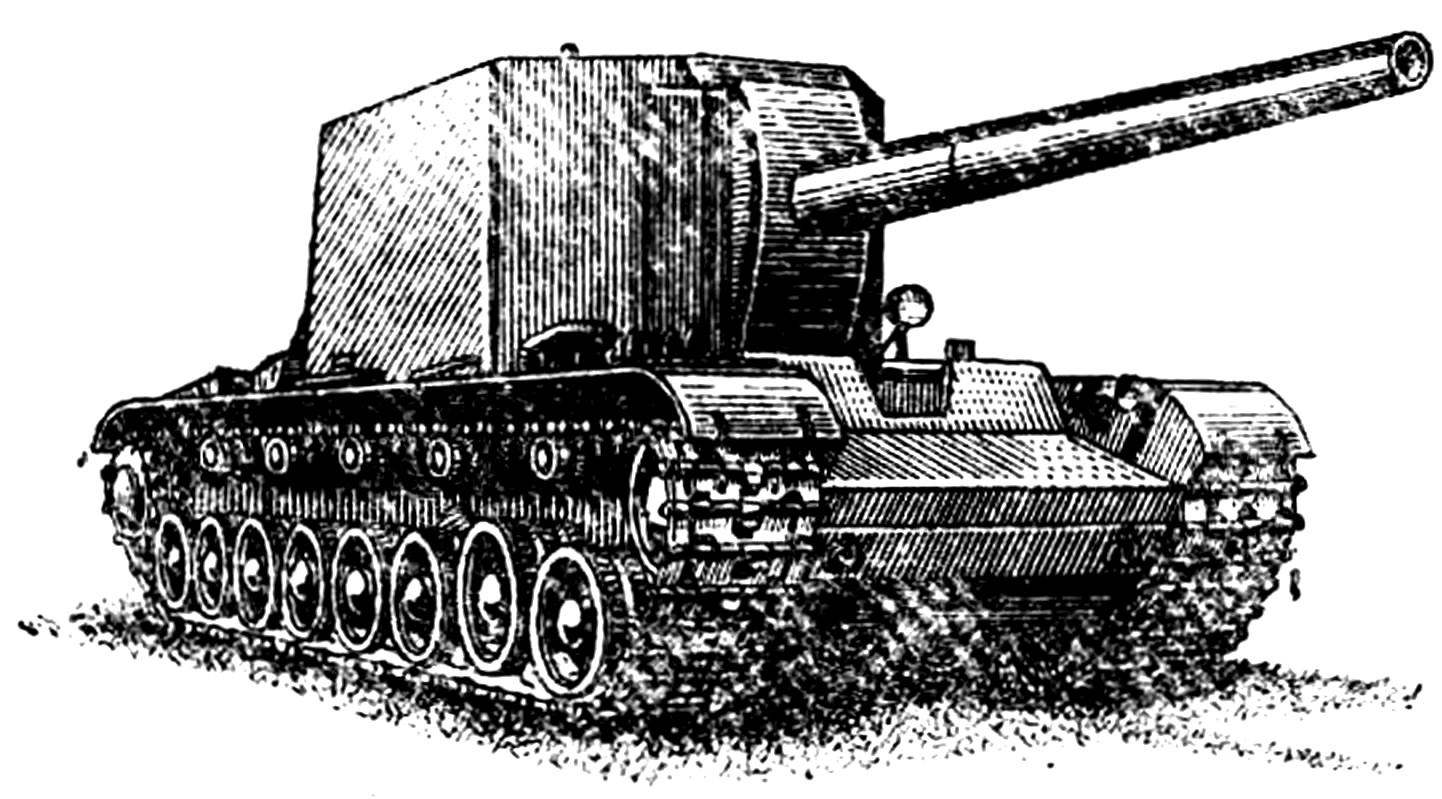 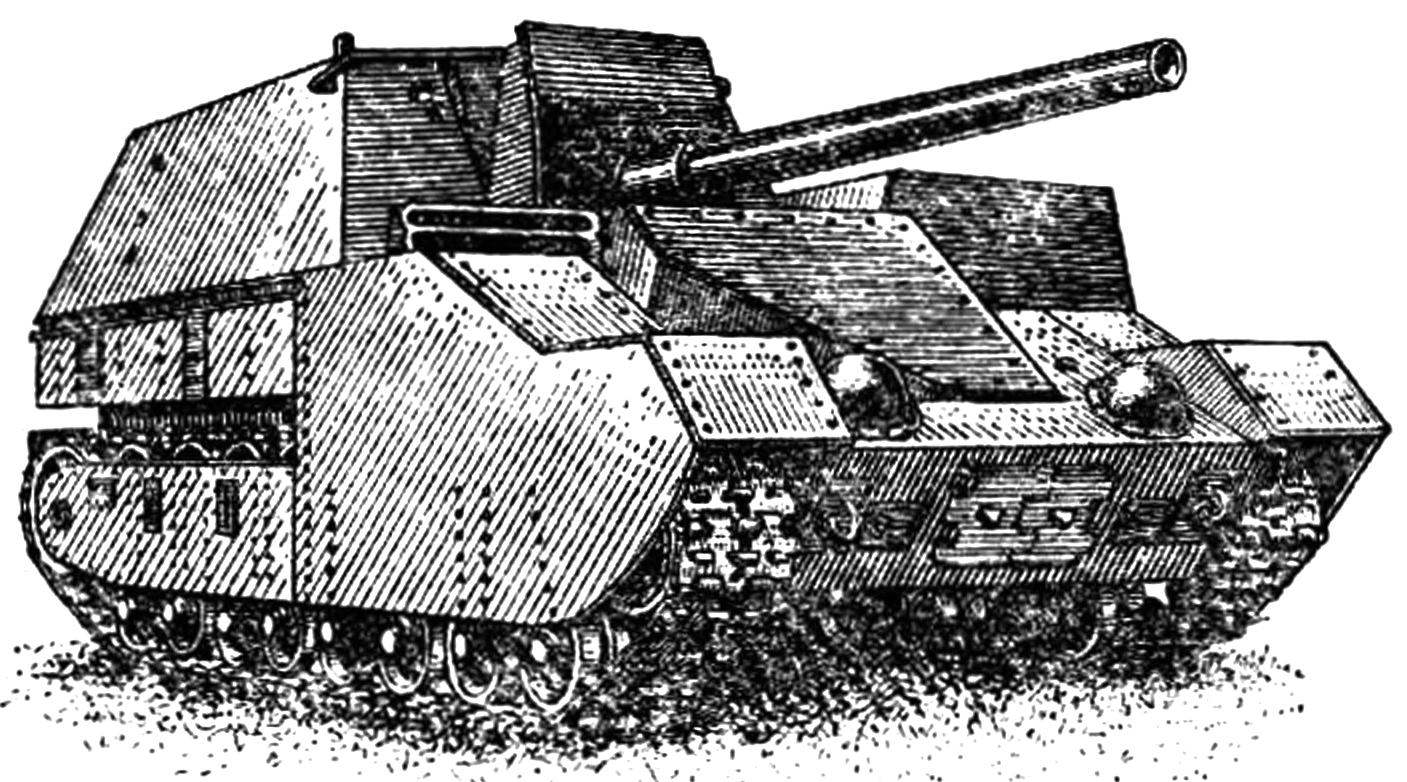 Experienced self-propelled gun SU-14Бр-2.
Go looking for in the creation of a self-propelled, armor-clad, gun systems of caliber of 152, 130, 210, 230 mm. under the program, called the “Big triplex”, Soviet designers developed both on the basis of existing heavy tanks T-35, and with independent suspension, a number of experimental machines, generally referred to as “self-propelled artillery”. Such was the SU-14Бр-2 and SU-100 (“Y”). On the first stood howitzer-gun with a caliber 152 mm. the Second were armed with 130-mm cannon. However, prototypes have bulky malomanevrenny and, most importantly, did not survive the fire of anti-tank artillery. All this made it difficult to effectively used their firepower. The unexpected decision suggested that the main developer of the tank cannon-proof of your reservation KV-1 Nikolay Leonidovich Spirits. He was taken to install in your heavy tank has already been demonstrated invulnerability from anti-tank shells in the fighting against the troops of Finland, 152 mm howitzer-gun.
This has not happened! Limit for tanks considered the calibre of 76 mm — it is this gun f-32 was mounted on the KV-1. There were many doubts: will not tip if the machine with the shot, I can endure heavy load suspension and transmission will not come off if tower?
Still a new tank. Base — tank KV-1 was already tested. Wide tracks rested on six Opera steel rollers and three support rollers. Drive wheels, or as they were called, “stars”, were located in the aft where were the engine and transmission compartment. Reliable and showed himself invulnerable torsion bar suspension, planetary rotation mechanism. 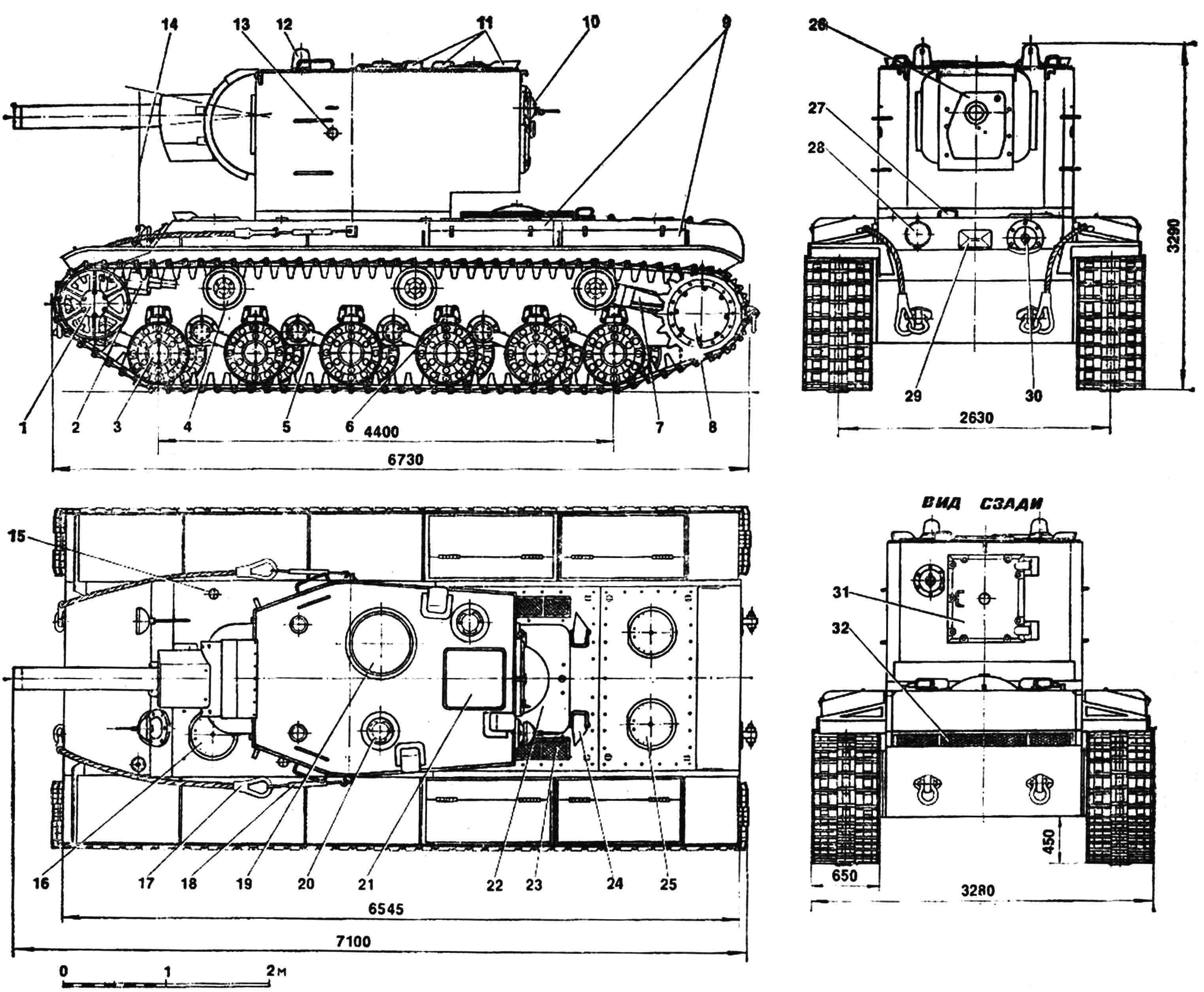 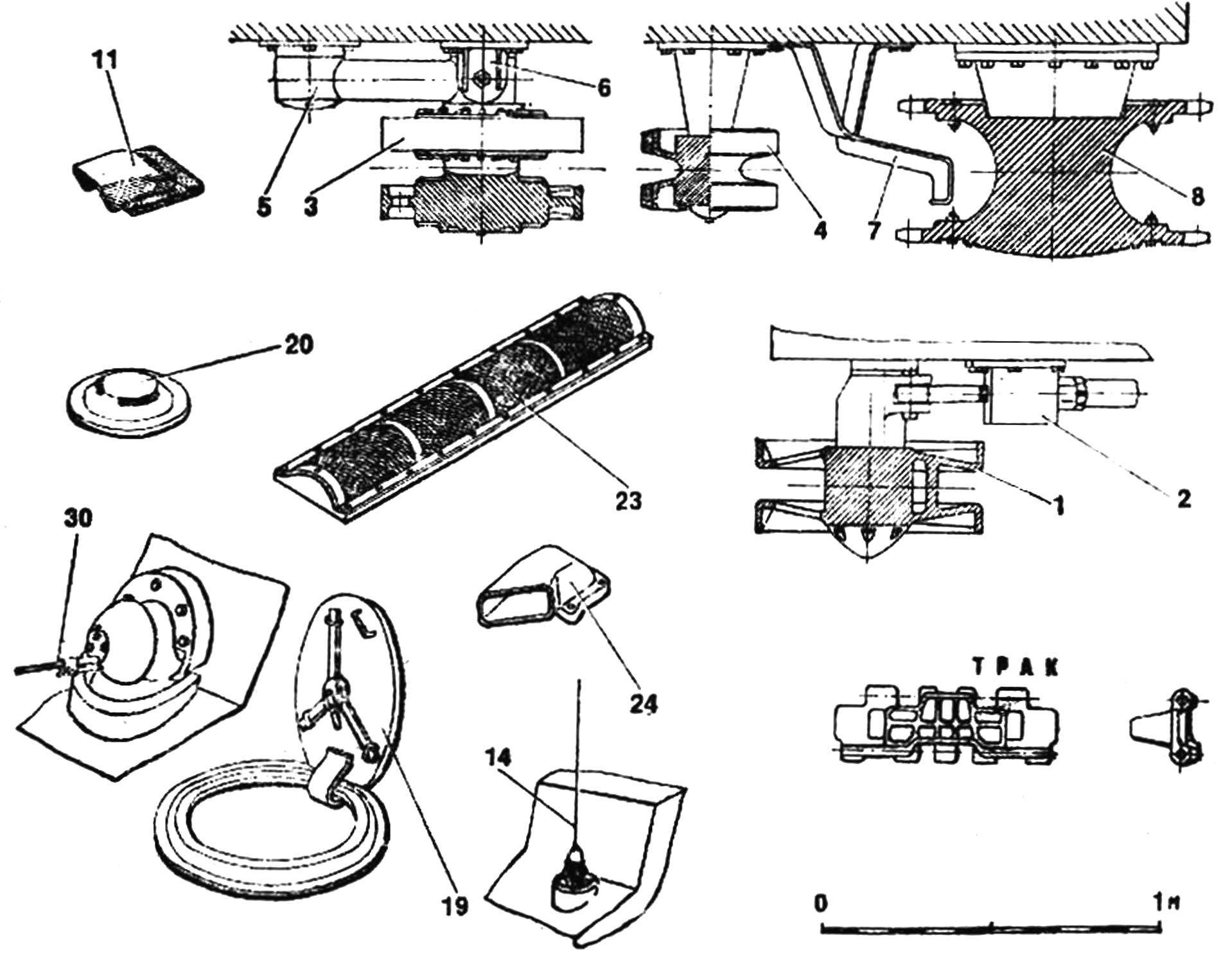 Heavy tank KV-2:
1 — sloth 2 — the mechanism of a tension of caterpillars, 3 — track roller, 4 — supporting ice rink, 5 — balancer 6 — emphasis equaliser, 7 — cleaner, 8 — star, 9 — boxes of ZIP, 10 — feed machine gun, 11 — surveillance devices, 12 — periscope armored covers sight, 13 — tube turret holes, 14 — antenna, 15 — tube cap front fuel tank, 16 — Luke radioman, 17 — tow cable, 18 — lanyard, 19 — tower hatch, 20 — the armored covers of the fan, 21 — hatch for loading ammunition, 22 — engine hatch, the 23 mesh louvered air intake, 24 — exhaust pipe, 25 pack Luke 26 — the booking mask gun, 27 — surveillance device of the driver, a 28 — Farah, a 29 — cover of the inspection hatch of the driver, 30 — the frontal machine gun, 31-hatch for Dismounting the gun, a 32 — mesh louver air throw.
New high-speed diesel engine V-2K output of 600 HP construction I. J. Trestina characterized by high reliability. Armor, reaching in the frontal part of the hull 75 mm, did not break the shells of anti-tank guns from any distance. To mount in the tank 152-mm gun ML-20S, had to make a high tower, which increased the frontal projection of the machine and a few slowing — not the main quality. Its mission is to enhance the combat firepower of the tanks of the basic type.
The crew of the KV-2 consisted of 6 people. The compartment housed the commander, driver and radio operator-gunner with a machine gun DT. The specific services ML-20C was provided, except gunner and loader, and even the castle (because castle was piston type, are not automatically opened and not closed).
The first tests in the factory dash dispelled all doubts: the strength of the design was sufficient. Two experienced tank KV-2 began to prepare to send to the front.
“Obstacles on the Mannerheim line, recalled later the commander of one of these machines, E. F., Glushak, was made thorough. Before us stood three rows of huge granite dragon’s teeth. And yet, что5ы to make passage with a width of 6-8 meters, it took us only five shots betonoboynymi shells. While hacked into the dragon’s teeth, the enemy continuously shelled. Dot we are rapidly detected, and then two shots completely destroying it. When disengaged, the armor counted 48 dents, but no holes”.
Note to myself another fire value KV-2 — it could fire concrete-piercing shells, which had no other tank shells. This quality came in handy later, at the beginning of the great Patriotic war. Marshal of the Soviet Union G. K. Zhukov, in his book “Memories and reflections”, recalls a conversation on the device “Bodo” with the commander of the 5th army of General M. I. Potapov, on 24 June, 1941:
“BEETLES As are our KB others? Pierce the armor of German tanks and approximately how many tanks were lost the enemy in Your front?
POTAPOV. KB big tanks (KV-2. — Note. ed.) there are 30 pieces. All of them without the shells for 152-mm guns.
BEETLES. 152-mm guns firing shells KB 09-30., so order now to give concrete shells 09-30. and put them in motion. Will peel the enemy tanks at all”.
Concrete-piercing shells were not used earlier because of the advancing German troops did not build the concrete structures. The projectile had a fuse that triggers a slowdown, which allowed the projectile to penetrate the thickness of the concrete. Getting in the turret, he is still to break his weight almost a hundred pounds just tore it, cast aside. 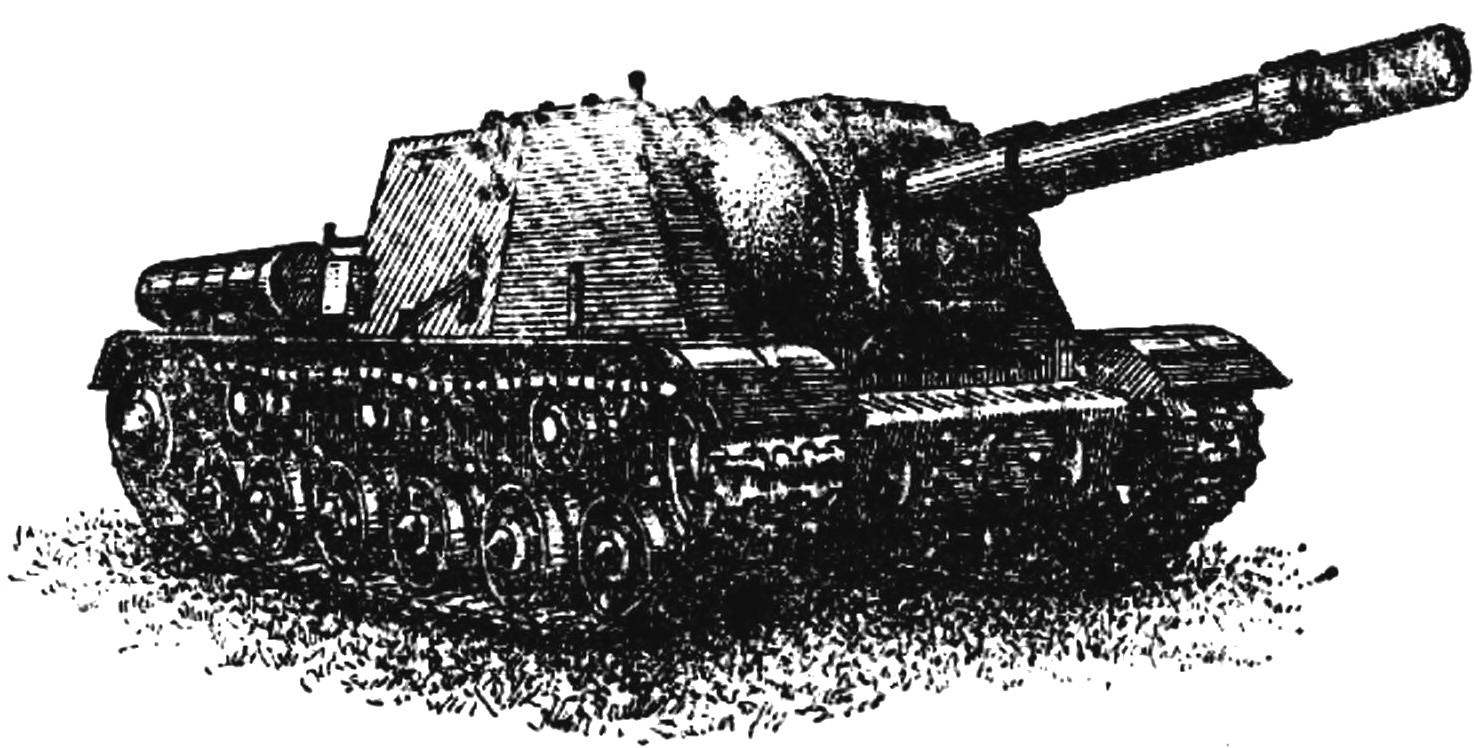 Heavy self-propelled artillery installation ISU-152.
Returning again to the early forties. Heavy tank KV-2 has not yet called self-propelled artillery, but everyone knew what tasks he will perform a specific that this war machine is very necessary. Given the high probability of the shells hitting a high tower, the designers in 1940, a few have modified it, increasing the slope of the frontal armor plate. Removed and were in the hull machine gun. And despite the fact that the KV-2 was produced in very small series, it rendered good military service and pushed the design idea for the creation of heavy artillery self-propelled guns.
In early 1943 on the basis of the KV-1S in a non-rotating armored cabin mounted the same 152mm gun. With this new machine, named the SU-152 was below the “growth”, and the tool more efficiently housed in the housing.
In July 1943, the first thirty-five self-propelled guns were unloaded from the echelon in 100 km from the front edge. After a three-hour March they go into battle at the Kursk bulge. Losing twelve tigers and seven heavy self-propelled guns “Ferdinand”, the enemy abandoned the attack at this site. And in September of the same year at the front began to receive artsmode ISU-152, made NZ a better base tank is-2. So a small series of tanks KV-2 marked the beginning of modern heavy self-propelled artillery.
TACTICAL AND TECHNICAL DATA OF THE KV-2
combat weight, t …………..52
The crew, man …………. 6
Armament:
howitzer-gun ML-20S . . ……. 1
machine gun 7.62 mm …..:…… 3
Booking (forehead, side, turret), mm ….. 75
Engine-2K HP …….600
Speed on highway, km/h ………. 35
Cruising on the highway, km ………. 250
Atideo: