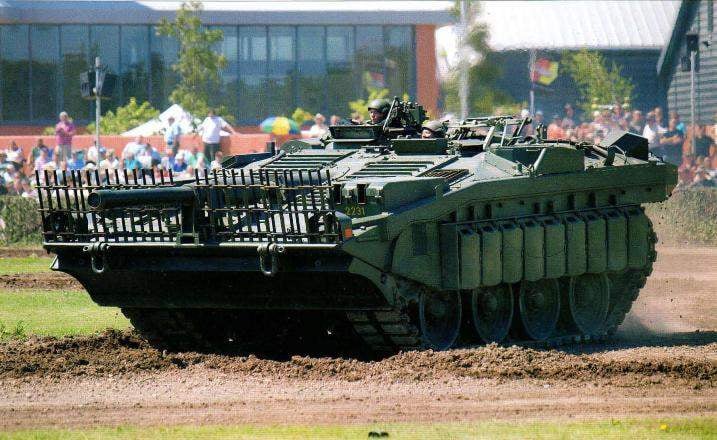 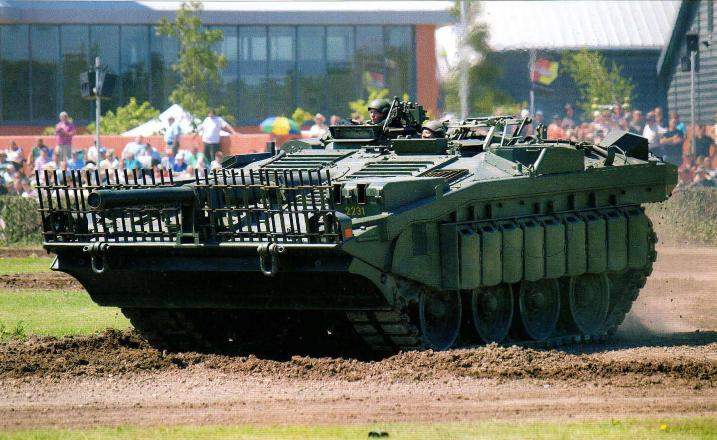 After world war II in tank to establish a relatively strict classification. Steel tanks called armored combat vehicle on tracks with a cannon placed in a rotating turret. Self-propelled artillery installations (SAU) was called artillery on self-propelled chassis. Assault guns -well armored self-propelled gun on the base of the tank for direct infantry support and suppression of enemy tanks. Tank destroyer – specialized units to combat enemy armored vehicles, sometimes with incomplete anti-bullet armor. In the case that the tank destroyer had a full reservation, it was called a tank destroyer. In 1966 in Sweden in serial production was the main battle tank Strv-103, which combines the capabilities of the tank and at the same time, the fighter tanks.
The Swedish army has a rich combat history. Although the country has not fought for nearly two centuries, the combat capability the Swedish armed forces is estimated highly enough. The first armored vehicles in the Kingdom appeared in 1920, when the Swedish firm Tidaholm has made a few experimental armored vehicles. Further the Swedes always supported the combat power of his Panzer forces. So, by September 1939, their army had 104 tanks of domestic production. In addition, purchased 64 Czech tank; 48 – m/37 and 16 m/38.
By June 1941 the number of tanks m/41 in the armed forces of Sweden, built in the Czech license has reached 116. By June 1942 its industry produced 122, and by March 1944 – 106 these tanks. In addition to them, produced and self-propelled guns on the Czech license chassis.
In the first years after the Second world war, Sweden has developed new tanks. In 1953 in the UK to buy 80 tanks “centurion” MK.S armed 83,8 mm cannon. They received the designation Strv-81. Later acquired about 270 “centurion” MK.10 (Strv-102) with 105-mm gun.
Centurion well established itself in many local conflicts, but he had serious flaws. Cars last modifications had excess weight, but in terms of booking and weapons consistent with the medium tank of the earlier work. In addition, they developed lack of speed and had a small reserve, since they were installed derated aircraft engine “meteor” with a high specific fuel consumption. During the war this engine was used on fighter “Spitfire”, but by that time he already out of date. The latest versions of the tank MK.9 and MK.10 used power plant, previously stood on the tanks, “Cromwell” and “Comet” but they have not improved their fighting qualities. 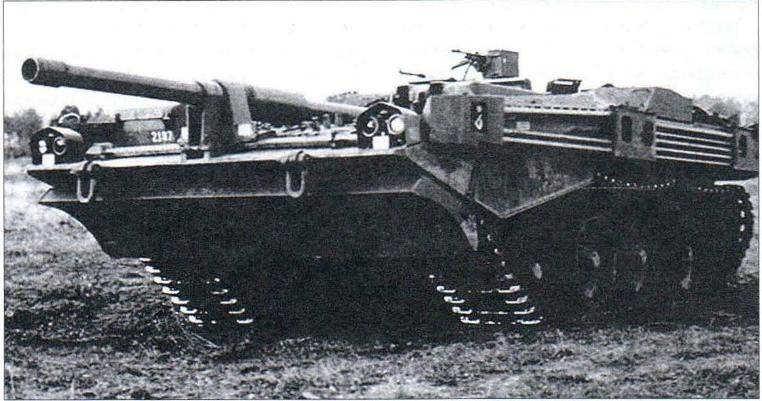 Main battle tank Strv-103A
Soberly assessing the possibilities of “centurions”, the Swedes from 1956 to 1961 he spent a lot of effort and money to create a new sample, at the level who was at that time the Soviet and American machines. The key point of this project was that it would become “major” and “centurions” remained in service in the Swedish army and would be able to accompany the infantry, to keep fighting in the settlements and to solve other tasks inherent in the tanks. However, the “centurions” in no way were able to conduct effective anti-tank fight. It just shifted onto the shoulders of the new tank Bofors Strv-103. Upgraded “the centurions” received the designation Strv-104.
When designing the Strv-103 was proposed mainly projects “tank made weapons”: the crew was located in the tank hull instead of the turret housed the automatic rotary tool with a minimum booking breech (the most famous project of this type – an experimental model ELKE with a 75 mm smoothbore gun Ares installed on the chassis М551). However, long-term testing of these machines revealed low reliability of the unprotected tank, its vulnerability to enemy fire and poor visibility for the commander.
In the future, the Swedes have taken a different path. When the press first pictures and diagrams of their new main tank, a number of experts of England and the United States and tank name did not, stubbornly signing photos of “Swedish self-propelled guns”. They believed that the Swedish experiment of several samples. However, stubborn Scandinavians from 1966 to 1971 he produced 335 units of this type. For a relatively small their army number is unprecedented. Then in English literature for the machine came up with its own classification – “S-tank” (S – Swedish). In other words, “we tank the car did not believe, but in Sweden is a tank”.
The basis of the armament of the Swedish Bofors Strv-103 was rifled 105-mm gun L74, rigidly fixed at the base of welded machine body with mechanism for automatic loading. L74 was produced in Sweden under license and was different from its English prototype L7 mainly by the length of the barrel 62 caliber instead of 52. It had a hydraulic recoil brake and spring lakatnik. The persistence of the barrel as high as 700 shots. The shooting could be all the ammunition designed for the L7. The ammunition consisted of 50 shots, mostly with a piercing, high-explosive and smoke shells. On the barrel of the gun had ejection device.
The version with a fixed gun, the designers chose to simplify and improve the reliability of the automatic loader, consisting of a pitcher and docelowego mechanisms and three shops with shots. One of the stores with 25 shots is located to the right of the gun, and the other two with a capacity of 20 and 5 is left. When reloading tools the spent casing ejected through a hatch in the aft tank. 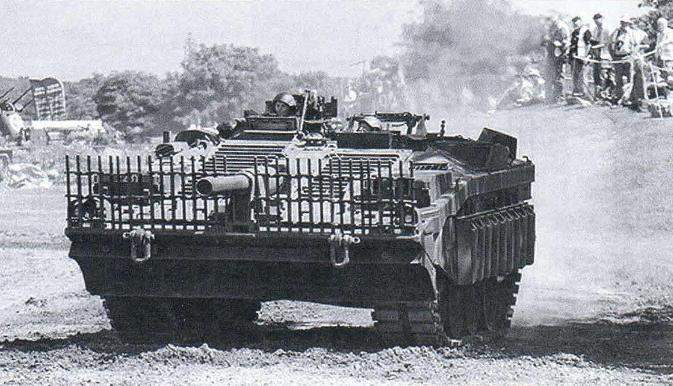 The main battle tank of Sweden Bofos Strv-103A. Demonstration of the machine at the tank Museum in Bovington 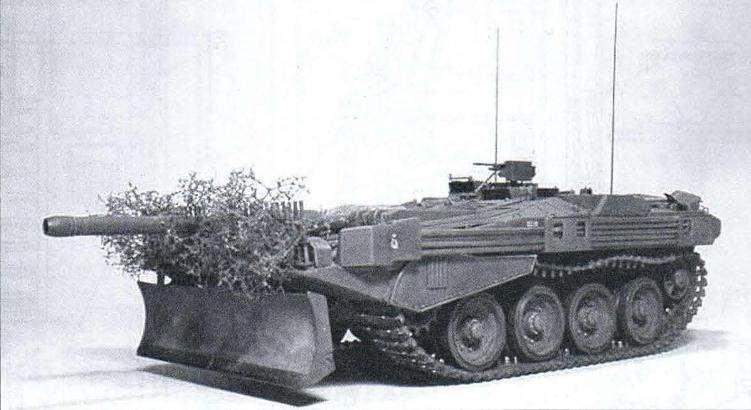 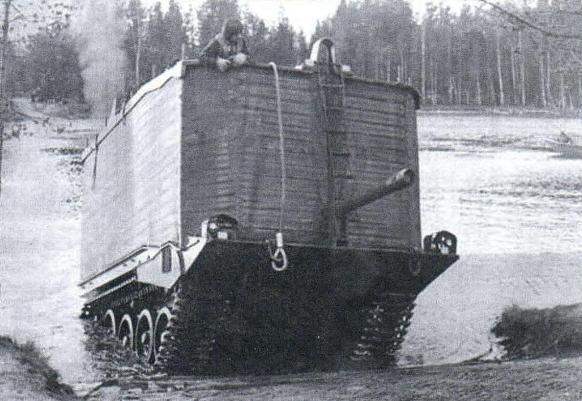 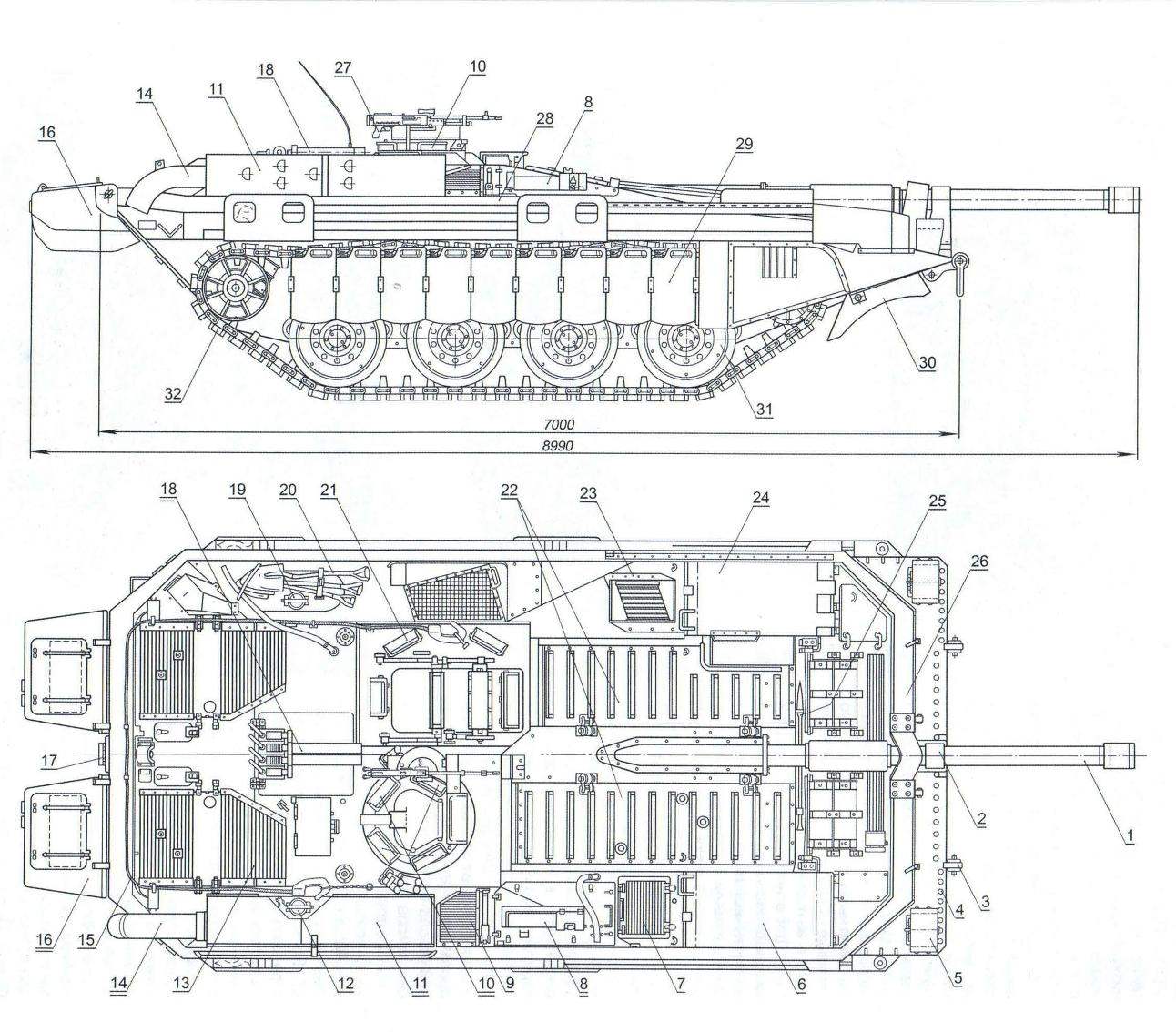 Main battle tank Swedish Strv-103С:
1 – 105-mm gun L74; 2 – clip of the gun barrel; 3 – bow tow loop; 4-anti shaped-charge grating; 5 – safety clip lights; 6 – right natknulsya box; 7 – grate inlet of the ventilation of the engine compartment; 8 – air filter diesel; 9 – outlet of the ventilation system of the power pack; 10 – periscopes OR-2; 11 – muffler; 12 – right filler neck; 13 – radiator grille of the cooling system; 14 – exhaust pipe; 15 – tow-rope; 16 – external fuel tank, 416 l; 17 – the hatch to eject spent cartridges; 18 – a double-barreled smoke grenade launcher; 19-left filler neck; 20 – gardening tools (3 shovels in the whole command); 21 – periscope OP-2; 22 – hinged side panel of the engine compartment; 23 – exhaust hole of a gas turbine; 24 – left natknulsya the sponson with two machine guns coursework; 25 – scrap; 26 – mounting base waterproof skirt to overcome water obstacles; 27 – machine gun Ksp 58; 28 – installation of poles for stringing waterproof canopy skirt; 29 – side screen of the hinged fuel cans; 30 – dozer bucket-a blade; 31 – support roller; 32 – Shoe tracks
The machine provided the technical rate to 15 RDS./min. Loading of stores was carried out manually in two aft of the hatch and took 5-10 minutes.
First, the “S-tank” compared with self-propelled “Hetzer” (Hetzer). However, a L7 gun is not going to any comparison with its threaded 75-mm Cancer 39/2. German self-propelled guns had a practical rate of fire of one shot in 45 – 55, her shell pierced the frontal armor of new Soviet and American tanks. Strv SW became more formidable opponent.
The prototype was only two bow machinegun, but soon the Swedes learned that the car defenseless with the rear and side sectors, and set the third machine gun on the commander’s cupola. All the guns Ksp 58 7.62 mm – licensed version of the Belgian FN MAG 58, which was based on the German MG42.
Case Strv SW caripe of steel rolled homogeneous armor. In those years all over the world discussed the possibility of creating machines with aluminium and even plastic armor, but in Strv SW, Napomena new and innovative solutions that the Swedes were intelligent conservatives. Frontal armor in the upper part of the body has a thickness of 60 mm and slope sheet 78° to the vertical, at the bottom of 50 mm at a slope of 72°. While this combination of thickness and rational angle of the armor was considered the best in the world. Other parameters: body Board 38 – 50 mm feed housing 20 – 30 mm, top 25 mm, bottom 15 mm.
In addition to the rational angles of armor plates in favor of the Swedish tank was its low silhouette. “103rd” on the ground was a subtle goal height for the roof is only 1900 mm. For comparison, its tower peers looked far more noticeable: M60 (USA) – height mm. 3213 T-62 (USSR) – 2395 mm, “chieftain” MK.1 (UK) -2640 mm, the AMX-30 (France) -2290 mm.
It is obvious that the Swedish tank “dwarf” was, but it was below their counterparts. 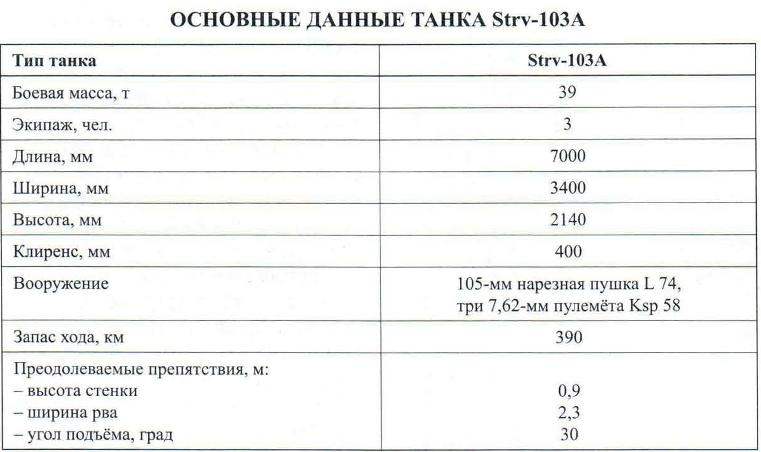 BASIC DATA of the TANK Strv-103A 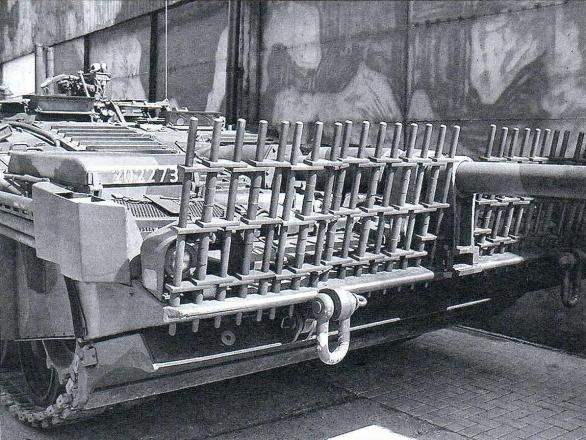 Of anti shaped-charge lattice of banasthali is attached to the front head sheet. Can withstand contact with four ATGM (1992).

Comparison of the lateral projections of the Swedish and German tank “Leopard”
The most important fighting unit of the tracked vehicle is its engine. After the fantastic success of Soviet tank development in world war II for a long time developers have dominated the fashion for diesel engines, which were subsequently replaced by multi-fuel engines. But in this matter, the Swedes took to their “B-tank” innovative solution: it installed a combined power plant consisting of a main diesel engine “rolls-Royce” K. 60 capacity of 240 HP and auxiliary gas-turbine engine GTD Boeing 502-1 OHM produces 490 HP GTE was associated with diesel mechanical gearbox and connects to it when moving the car in difficult conditions. It can be used to run diesel in the winter. The maximum speed of the Strv-103 with such a setting was 50 km/h compared to 35 km/h “Centurion” this was a quantum leap. Cruising on the highway was 390 km (“Centurion” – 190 km).
Hydromechanical transmission DRH-1M company “for sale” included the torque Converter, transmission, and steering mechanism with hydraulic transmission additional drive. In the gearbox there were two drive and two rear, the motion could be carried out with equal speed both forward and backward – tank in this case was conducted by the radio operator, having all of the necessary controls and monitoring devices.
Suspension Strv-103 – individually adjustable hydro-pneumatic that allow you to change the position of the rollers (rollers are aligned with the “centurions”) relative to the housing and install the housing to aim the weapons at the target in the vertical plane. Because pointing a gun on the horizon demanded a rapid rotation of the tank, to reduce resistance to its rotation the length of the bearing surface was reduced to 2.85 m, and it can be further reduced with the rise of the extreme rollers.
MODIFICATION OF THE TANK
Strv-103A (1966) – first production variant. The combat weight of 39 tons of variants “A” and subsequently upgraded to standard Strv-103B.
Strv-103B (1969) – the power plant of high power (GTE Boeing 553), a laser rangefinder integrated into the commander’s sight, waterproof stackable Board to overcome water obstacles, self-entrenching device (dozer). Coaxial gun sighting machine gun dismantled.
Strv-103C (1986 – 1989) – upgraded Strv-103B, past future upgrades. Installed fire control system with digital ballistic computer and a new gunner’s sight with laser rangefinder Simrad, multi-fuel diesel Detroit 6/-53Т power 232 HP, advanced automatic transmission with three gears forward and two back, double-barreled 71-mm Bofors Lyran grenade launcher for flares, new radiator, muffler, generator, 18 additional fuel tanks on the hull sides (9 on Board), new rear mounted tanks of increased volume. 1992 – fixture for attaching additional armor in the frontal part of the body, including dynamic and modular, and the system of protection against weapons of mass destruction. The combat weight of 42.5 t 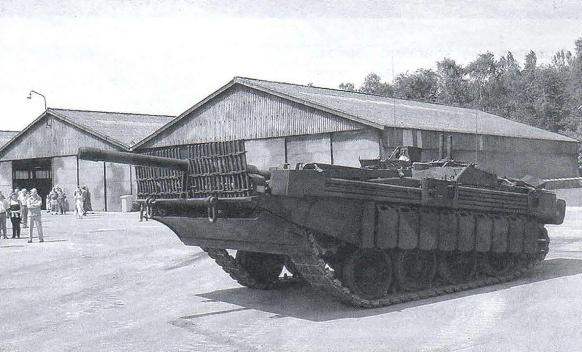 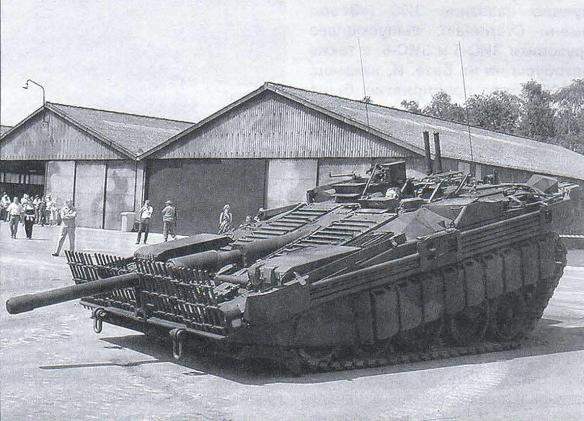 Hydropneumatic adjustable suspension Strv-103A allows you to direct the gun at the target by tilting
Tank since 1966, and entered service with the Swedish army. Since its appearance, the tank Strv-103 attracted the attention of tank builders around the world. He was the first main battle tank with an automatic 105-mm gun, a crew of three, and is able to overcome water obstacles swimming. In the mid-1970s, the Strv-103B was tested in the US, UK and Germany. 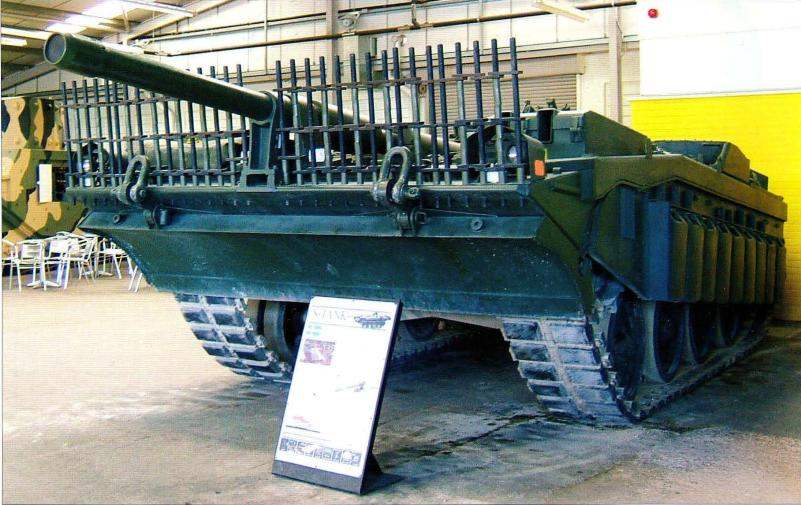 Strv-103A in Bovington
However, the experience of the exercises of the Swedish army and trials abroad have shown that the inability to conduct aimed fire on the move is
a significant disadvantage of the tank in modern combat. Since the mid-1990s, as the influx of troops in the German tanks “Leopard” 2A5, Strv-103B and 103C removed from service.
There are in tank Advanced design, ahead of its time. There are parallel branches of development, and are perpendicular, showing the starkness of the laid down concepts. Perhaps this was the major and very interesting tank Strv-103.
L. KASHCHEEV