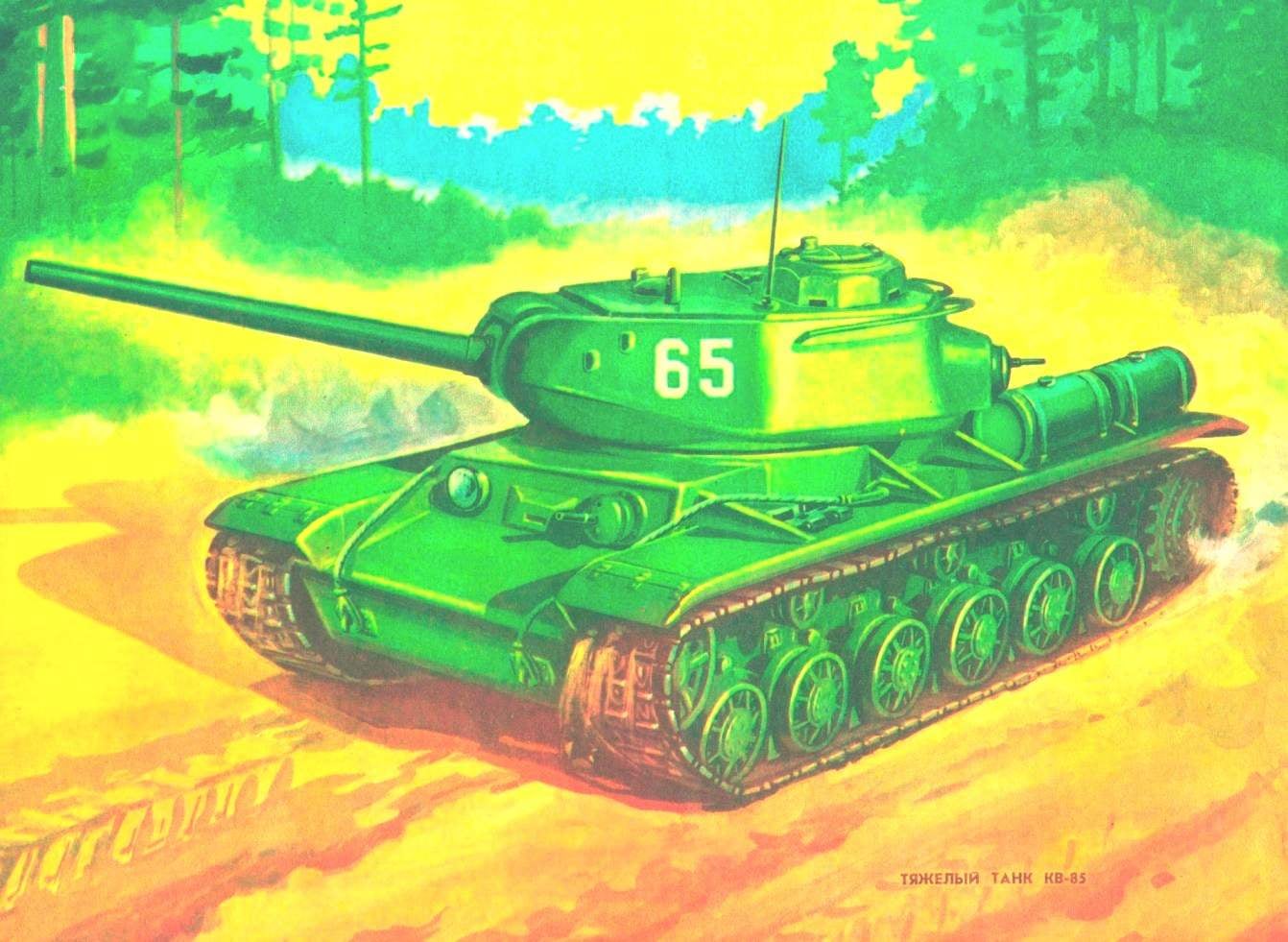 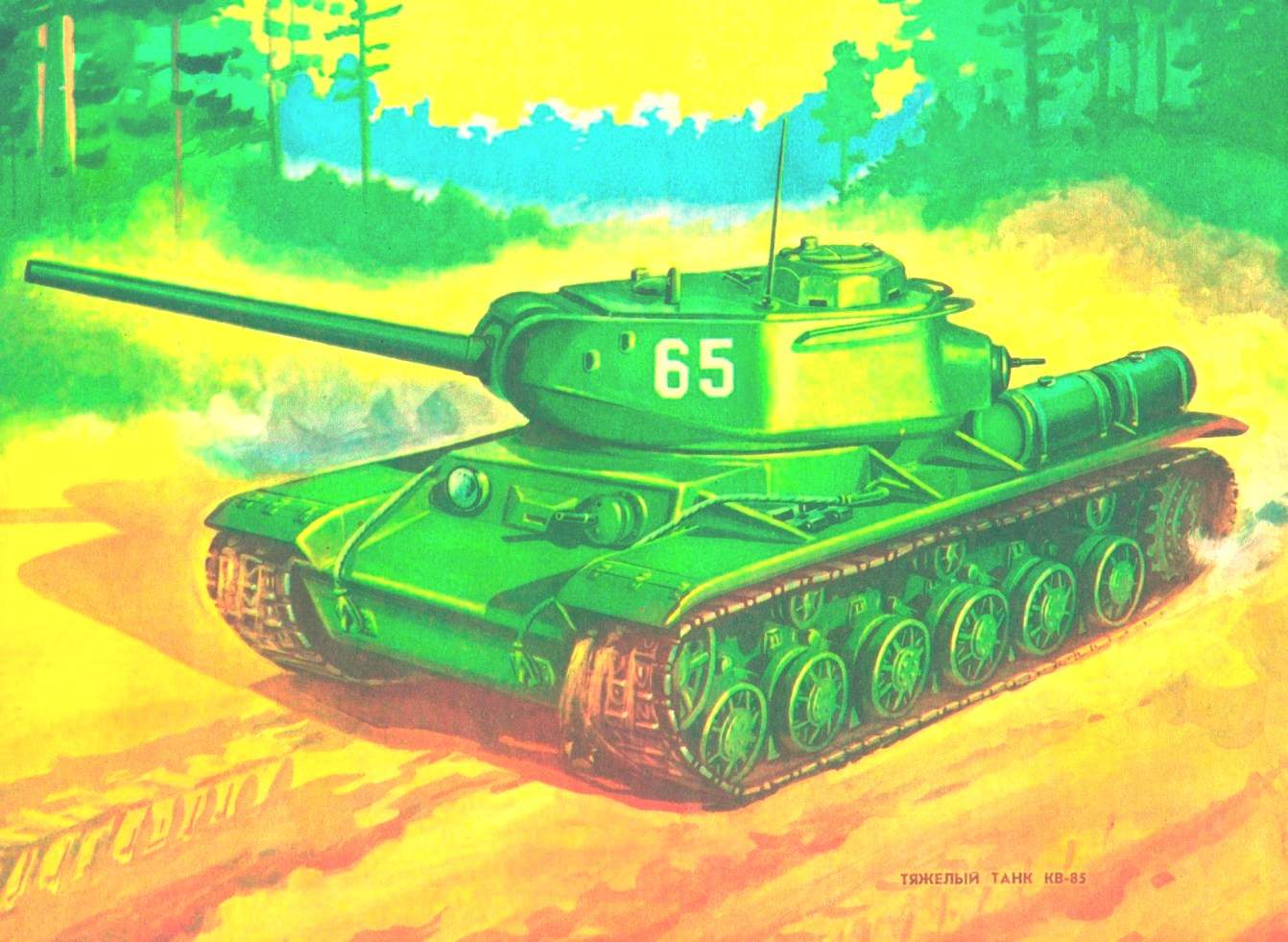 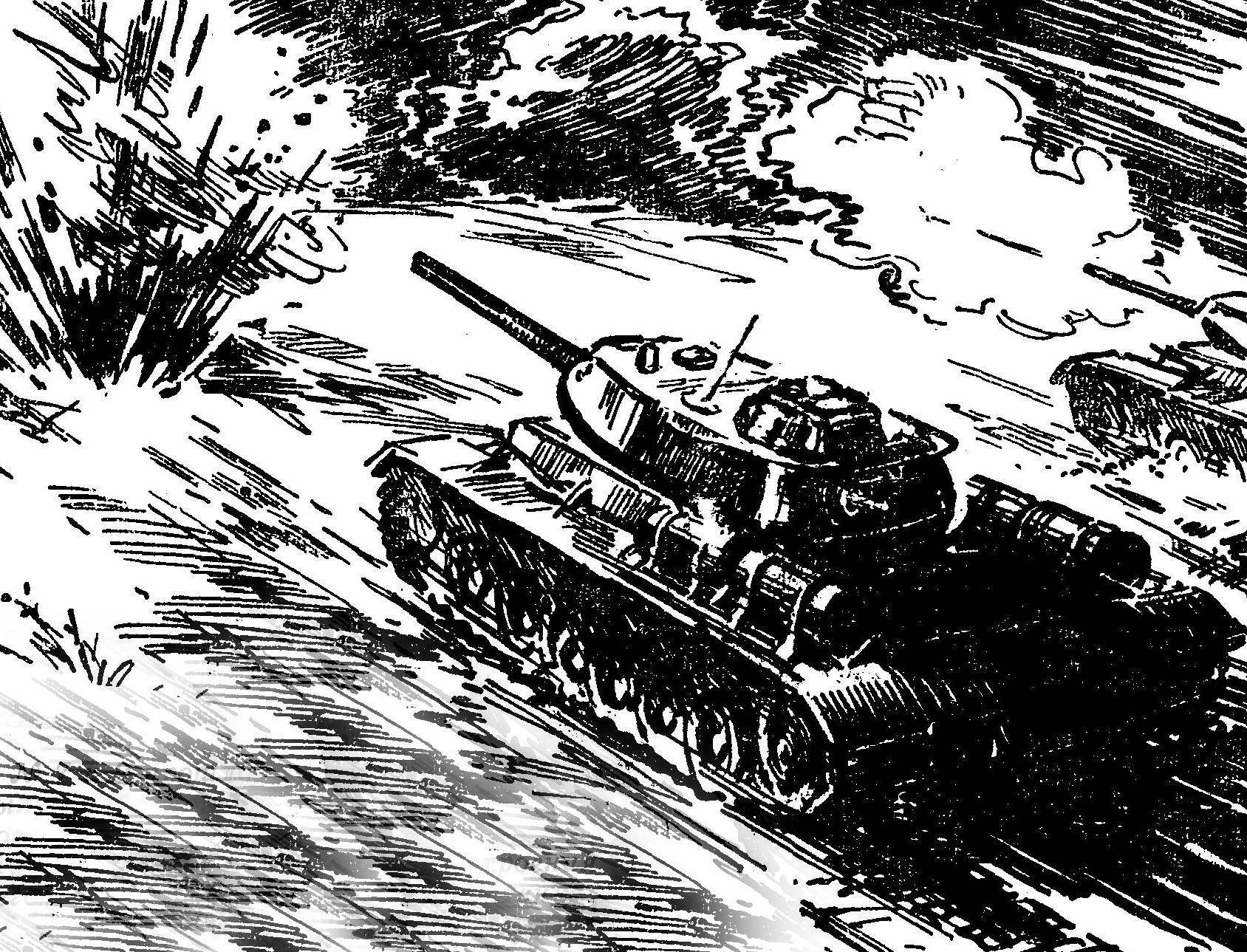 Sunset armored forces is inevitable — that is the conclusion reached by many military experts in the late 30-ies. The reason for this was the emergence of numerous anti-tank artillery, able to quickly shift the fire from one target to another and hit 30-40-mm frontal armor of all types these formidable machines. Although the duel armor and the projectile won the last, the designers have continued the search for reserves the survivability of tanks and seemed to have found a way out of the impasse. So, relying on the blitzkrieg, Hitler’s engineers created a high-speed machine guns 37-55 mm caliber and two or three machine guns. But high mobility (up to 55 km/h) was due to the weak armor protection. For example, the main tank of the German army T-W had a speed of 45 km/h, 37-mm gun, three machine guns, 30-mm front and 15-mm side armor. It was believed that the mass of fire and high mobility will be able to paralyze the anti-tank defenses, will allow tank units to penetrate deep into the attacked country, to seize her vital centers before it will be organized serious resistance.
In France we went to the other extreme: General Gamelin argued that the tanks will be stopped by anti-tank guns as infantry was stopped by machine-guns in 1914. Chauvigny military theorist insisted that the camouflaged guns, and mines dotting the path of military vehicles will win over the most advanced technology. “Why build tanks, exclaimed Chauvigny, — if the shell 75 mm, at a cost of 150 francs is easy to destroy a tank that costs a million francs!”.
United States approached the beginning of the second world war light tank M3 “General Stuart” and middle — of the brand is also the M3 “General Grant”, a Lack of thick armor, high altitude machines, caused by the use of aircraft radial engines, low fire power and bad placement of weapons in “the Grant” (in three tiers) led to the removal of these tanks from service in the first months of the war and the search for a new option.
In England in the prewar years produced tanks of two types: “cruising” with .easy booking and a weapon with a caliber of from 40 to 75 mm, and “infantry” equal to cruiser weapons, but with improved armor protection, which greatly weigh down their reflections on the mobility of vehicles and terrain. Infantry tanks were treated “Valentine III”, “Churchill MK1”. Cruiser tanks before the war existed only in the experimental versions.
A sharp turn in views on combat characteristics of tanks in the USSR occurred at the end of 30 years, after the civil war in Spain, in the conflict with Finland were widely used anti-tank artillery. In all growth there was a question about the need to strengthen the armor protection of these machines and increase the caliber of tank guns to effectively combat anti-tank artillery.

Fig. 1. The first Soviet tank cannon-proof of booking T-46-5.
Fig. 2. Experienced two-towered heavy tank SMK.
Fig. 3. Heavy tank KV-1.
R and 4. Artillery KV-2.
Fig. 5. Heavy tank KV-1s.
In 1937, the Soviet designers have created a prototype of the tank cannon-proof of booking T-46-5 (Fig. 1) a weight of 28 t His 60-mm armor protected from shells and 37-mm guns, at ranges exceeding 1,000 m and from the fire of 76-mm guns. The work on the car contributed to the accumulation of experience in the construction of the tanks with cannon-proof armor. Directly behind the T-46-5 was followed by a project of a heavy tank T-100 and the same with him QMS (“Sergei Mironovich Kirov”, Fig. 2).
Over designers still prevailed a tradition, according to which for heavy tanks, it was envisaged to have three to five towers. However, on new machines, there were only two. QMS had a weight of 58 t for the thickness of the armor was 60 mm, was armed with two guns (45 and 76 mm) and machine guns. About the same weapons and the reservation had a T-100. Prototypes it was decided to test in battle: at this time, Soviet troops stormed the heavily fortified positions of the Finns on the Karelian isthmus. Tanks SMK and T-100 and KV resulted in the coming of the commander of the test tanks Peter K. Voroshilov. In the area of the fortified point Suma experienced heavy machines steadily overcome anti-tank obstacles, despite the fire of anti-tank artillery, crushed by machine-gun nests and bunkers, shot at close range artillery positions.
Marshal of the Soviet Union K. A. Meretskov, in the army which acted in the new tanks, later wrote: “KV has passed through the Finnish fortified area, but to knock out his Finnish artillery failed, although the ingress was. We got almost invulnerable for the time machine”. KV (Fig. 3) differed from the SMK and T-100 higher mobility, smaller dimensions, more powerful gun, although the calibre was similar. His arms for the first time for the heavy tank was placed in one tower consisted of 76-mm cannon and three machine guns.

Fig. 6. Heavy tank KV-85:
1 — support roller (12 PCs), 2 — guide wheel (2 PCs.), 3 — supporting roller (6 PCs.), 4 — dome tower fan, 5 — hood of the periscope, 6 — input antenna 7, 8 — rail housing (5 pieces), 9 — driving wheel (2 PCs), 10 — bracket, fenders (10 PCs), 11 — spare tracks (4 pieces), 12 a rail — tower (2 PCs), 13 — exhaust pipes, 14 — fuel tanks.
Thereafter, the T-100 and SMK were used to create a powerful self-propelled artillery. One of these experimental vehicles based on the T-100 took part in the battle of Moscow in autumn 1941.
Tank cannon-proof of your reservation KV-1 (drawings and description, see “M-K” No. 9, 1970) was created in 1939, the design Bureau, headed by J. Y. Kotin. Lead designer of this machine was the engineer N. L. Spirits. The first samples of the KV-1 had a thickness of armor plates of 75 mm, but in 1940 there has been some modernization of tanks, in which his frontal armor reinforced with additional armor plate, the total thickness of armor was 110 mm. the speed of the machine with a new engine V-2K, uprated to 600 HP, reached 37 km/h. On the basis of the KV-1 in the summer of 1940 was created the so-called “artillery tank” KV-2 (Fig. 4) with a 152 mm howitzer — gun and flamethrower tank KV-8, armed with a flamethrower and 45mm gun.
At the beginning of the great Patriotic war, the KV was a formidable force for the enemy tanks. They came to duels with the enemy, superior in number 8-10 times. Twice hero of the Soviet Union Lieutenant General of tank troops Z. K. Slyusarenko recalls that the battalion of heavy tanks, which he commanded in the first months of the war, the commander senior Lieutenant A. Kozhemyako the day of battle destroyed 8 enemy tanks, 10 vehicles with gunmen and dragged in tow healthy enemy tank. The armor of the KV tanks were counted that day, about 30 dents from the shells. There were cases when tanks out of the fight, with up to 200 hits, but none of the shells did not penetrate the armor.
The success of the KV was so alarmed by Hitler’s generals, that in the autumn of 1941, the troops were sent a Directive forbidding the German tank crews to engage in fights with the Soviet heavy machinery. To combat HF Nazis used 88-mm anti-aircraft guns, and big guns. In the period of the battle of Moscow 1st guards tank brigade captured several guns with the inscription on the armor “to Shoot only for KV”. Soviet tank gun caliber 76 mm confidently struck heavy Nazi machine “Rheinmetall” and the average T-III and T-IV. The machine gun armament of the KV-1 was also used very effectively: one machine gun was paired with a gun, fire from the second (directional) led the gunner, and to repel sudden attacks from the rear was the machine gun mounted in the rear recess of the tower. 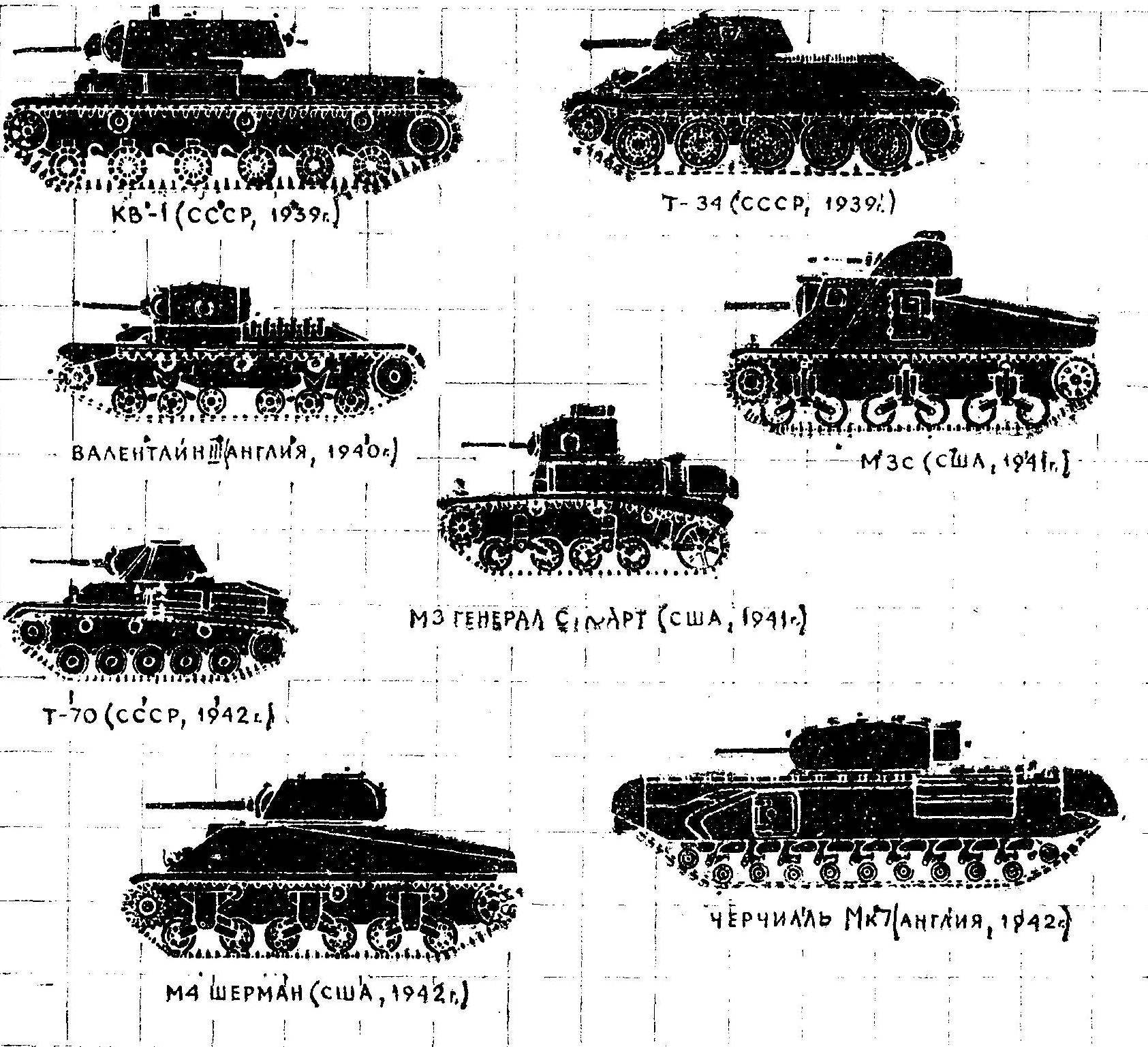 Fig. 7. Comparative sizes and silhouettes of tanks of the period 1939-1942 years.
Taking into account the latest trends in tank, in England and America have a different approach to the design of armored vehicles. In 1942, released infantry tank “Churchill MK-7” with the thickness of the armor front plate 152 mm, depth — 95 mm. However, he lost heavily in the mobility of the KV-1, with a top speed of only 28 km/h. Released in 1941-1942 tanks US Sherman M4 and M4A1 treated medium, but motility was almost equal to our KV — maximum speed did not exceed 39 km/h. With this reservation, “Sherman” was 76 mm in the frontal’ parts and 38-45 on the sides. A few more frontal armor of these machines brand M4A2 release of 1942. It reached 100 mm.
Despite a number of positive qualities, KV had significant drawbacks. Mobility it is much inferior to the early Soviet designs. The unreliability of the transmission is often exasperated him down even without combat damage. What was the firepower of guns. Gun caliber 76 mm is clearly not compatible with this well-armored vehicle.
Artillery designers in 1939 thought possible to establish in a heavy tank at least 85-mm cannon with a further shift to the caliber 107 and 122 mm. then the armed KV-1 76 mm gun f-32 was even much weaker than the 76-mm cannon f-34 medium tank the T-34. Thus, if the first task is to create a cannon-proof protection was solved, the other is to provide the tank a promising tool haven’t removed from the agenda.
Given the weakness of tank guns from major enemy of the T-III and T-IV, it was decided to somewhat reduce armor protection of the hull of the KV-1. And analyzing the most probable place of falling shells, the new variant of the KV-1s (Fig. 5) thickness of armor allocated as follows: the nose of the hull from top — 75 mm, the nose of the hull bottom — 60-75, the Board body is 60-65 feed — 60 mm On the turret armor distribution was the following: the mantlet is 95 mm, the forehead of the tower 110, the side of the tower is 100 mm.
By reducing some of the hull plates, the tank is lighter and more maneuverable. And soon there were constructive improvements in running gear. The series was released in very small quantities, as soon as the car set cast a new tower configuration with 85-mm gun D5-T85 compared to the KV-1s machine gun armament has not changed, but the power of fire of 85-mm guns equalized the new KV-85 (Fig. 6) appeared somewhat later the German “Panthers” and “tigers”. On the turret of the KV-85 mounted commander’s cupola with all-round visibility, which greatly improved the ability to survey the battlefield and fire control.
KV series provided to the Soviet tank forces heavy machines in the early stages of the war. The last tank of this series on the KV-85 was considered to be the best heavy machine beginning of the great Patriotic war. KV-85 with T-34 and T-70 took part in repulsing the German offensive at Kursk in the summer of 1943, when Hitler tried to reach a turning point in the war, entering into battle a large number of armored and mechanized units.
As a result of the failure of operation “Citadel”, the Nazi army suffered a decisive defeat.
TO BUILD THE MODEL
Tanks EB-85 in comparison with their predecessors of the late 30-ies had a more complete detailing of the armor plates of the hull and turret, better casting.
The case has increased the tide under the turret. Body paint protective color. The protective color is used to draw all the hatches, brackets PA motor parts, extra tanks, fenders, brackets. The spherical part of the machine gun mount in the frontal armor, headlight and position lamp — black. Spare tracks — black (bitumen).
The tower has a complex configuration and the tide for the installation of the aft machine gun. As usual, prism viewing devices are simulated by plexiglass. Ball machine gun mount — black (blued). The tower of white paint is applied to a three-digit or two-digit number. During the war it was decided to write the name of the tank, has in part, for example: “Shchors”, “Alexander Nevsky” and others.
Track rollers are metal, no rubber rim, painted in khaki.
A. BESKURNIKOV